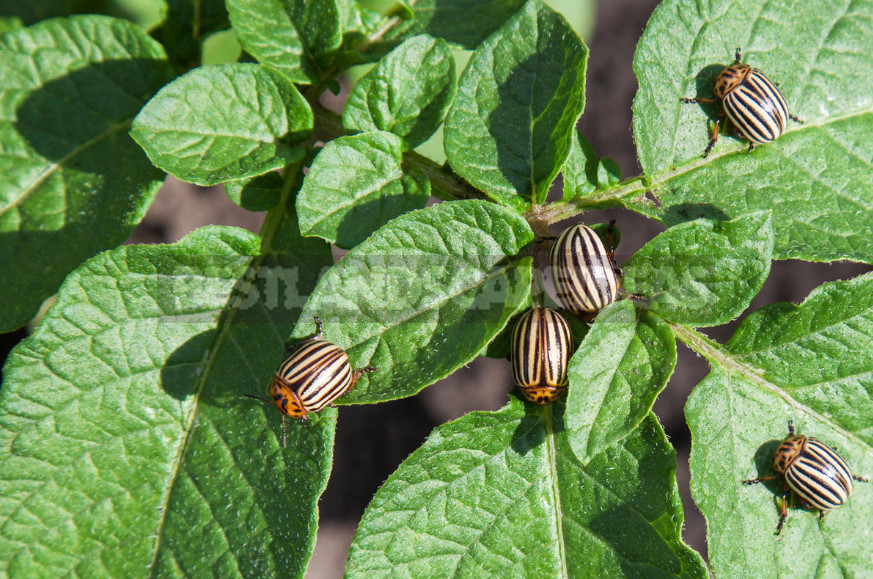 The potatoes have two large misfortunes that can almost completely destroy the crop – fungal disease and late blight Colorado potato beetle. In this publication we will talk about how to keep your potatoes — not to give the striped interventionist to win.

History of the invasion

In fact, the birthplace of the beetle – the North-East of Mexico, where he safely ate wild representatives of the family Solanaceae. The name “Colorado” was firmly attached to it when it destroyed potato fields in Colorado in 1859, although the first serious damage to agriculture was caused by this insect four years earlier in Nebraska. Subsequently, despite all the measures taken, the Colorado potato beetle quickly spread throughout North America – the benefit of a lack of forage it was not. It is known that he “tasted” cultivated potatoes only in the early XIX century.

In 1876-77, this pest was first seen in Europe in the vicinity of Leipzig, and at first the struggle with the overseas guest was quite successful. However, during the First world war won the Colorado potato beetle – striped “landing” was able to take “foothold” in the Bordeaux region in France, where he began the conquest of the Old World. 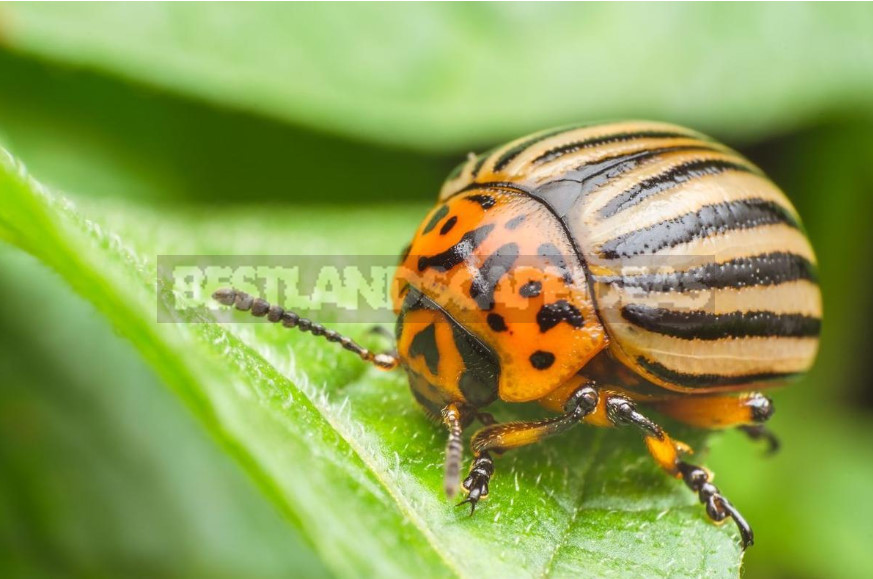 The promotion of potato leaf beetle to the East was facilitated by the climate: in the summer months in Europe, the East wind prevails, the sea element also helped its spread. Beetles are able to make mass flights for tens of kilometers at speeds up to 8 km/h and prefer to use the wind.

As a result, the first Colorado beetles were found in the USSR in 1949, later they managed to capture Ukraine and Belarus. The most dangerous year was 1958, when a strong wind and sea currents threw millions of beetles into the Soviet Union, and from that time on the expanses of the socialist homeland the pest became mass.

READ  Gallic Aphid on Currants: a Method of Pest Control

The life cycle of the Colorado potato beetle is simple and effective at the same time. Only adults hibernate, burrowing into the ground for 20-50 cm. Mating usually occurs in the spring, but can happen in the fall, before winter rest, and only one fertilized female is enough to create a new pest focus. One female is able to lay up to 1000 eggs, although the average figure is three times less. Dynamics depends on the weather, and especially rapidly beetle develops in hot dry summers. In the Northern part of the area usually displays 1 generation, in the South – 2-3. 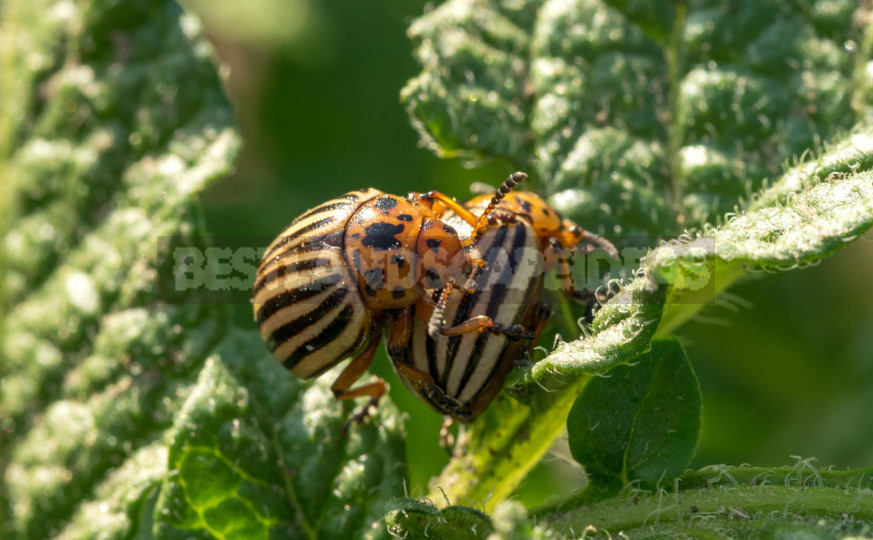 Females lay eggs on the lower side of the leaf and therefore, although the clutches are bright yellow-orange, it is difficult to notice them. After 5-17 days larvae appear. They distinguish 4 age – the number of molts. The larvae of the first age are very small and usually feed on the underside of the leaf plate. Starting from the second age, “kids” are able to eat all the flesh of the leaf, except the middle vein.

Usually larvae of the first and second age keep together — “red bunches” on tops of escapes, and the third and fourth — creep on the next bushes. 2-3 weeks after emergence from the egg the larvae go into the ground to a depth of about 10 cm, and pupate. The pupal stage lasts 10-20 days. 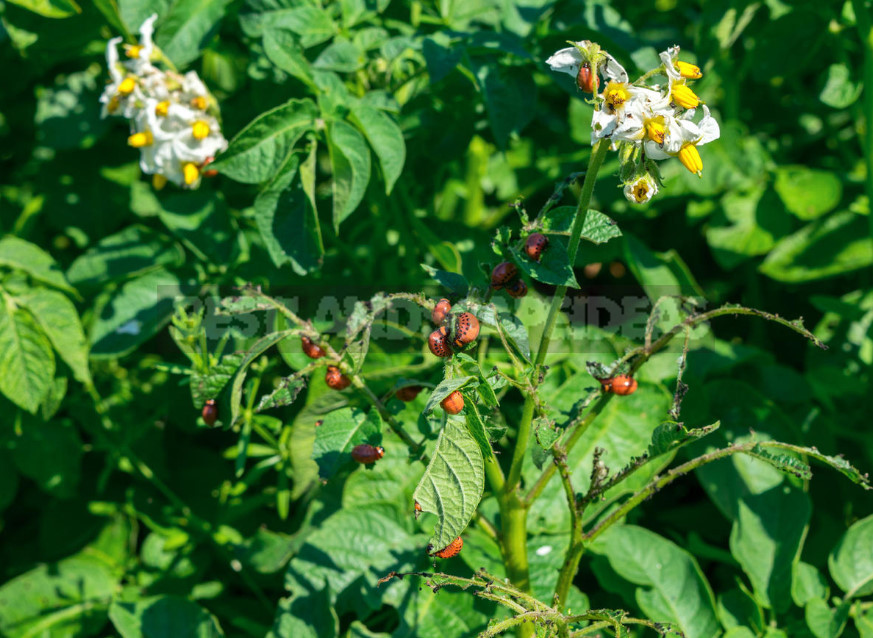 Depending on the weather and soil temperature, the adult can come to the surface and continue the harmful activity or gradually hibernate until next spring. Usually a Mature beetle lives 1 year, but in the population there is always a part of individuals capable of a long diapause – up to 2-3 years, which makes it difficult to control the pest.

The Colorado potato beetle has almost no natural enemies – representatives of the Solanaceae family, including potatoes, contain toxic substances that accumulate in the body of beetles and larvae. In nature, only some predatory insects are able to restrain its number, and work is underway on their “domestication” and use. There are also attempts to “attract” to the fight against striped pest parasites and bacteria.

READ  How to Get Rid of Whitefly in the Greenhouse. Proven Way.

On agricultural land on an industrial scale for a long time and successfully used chemicals, but the lot of summer residents for decades was tedious manual collection of beetles and larvae. Many still shudder to remember the tin can with kerosene, which burned beetles as it is filled. 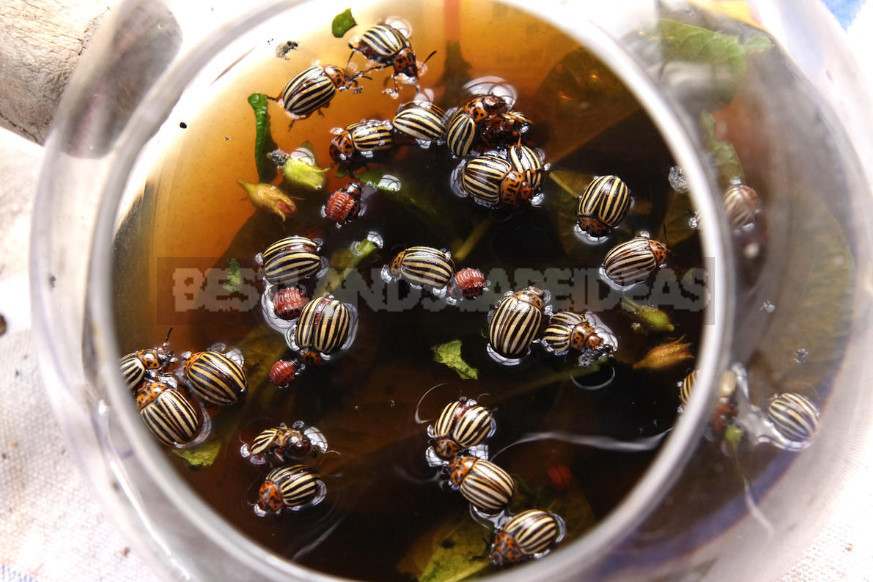 As danger approaches, beetles and larvae fall and pretend to be dead. This tactic works successfully: you will not find one “lost beetle”, when there are still a few acres of potato fields. And each individual, to avoid a “deserved punishment,” has all the chances to leave many offspring.

Attempts to teach poultry to eat the larvae of the Colorado potato beetle are widely described in popular literature. Guinea fowls, turkeys and pheasants under certain conditions can eat a number of larvae, but this food is unnatural for them. 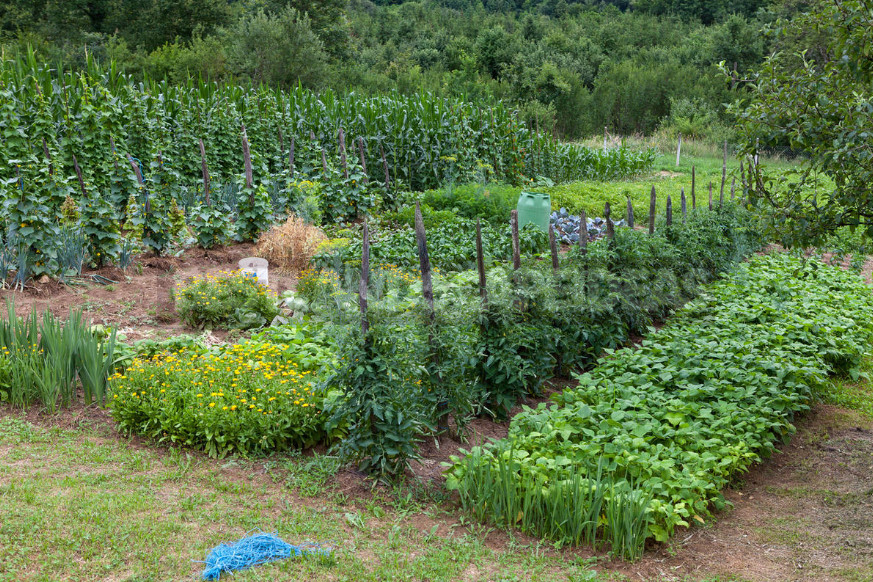 Joint planting of potatoes with other plants that have a strong smell can confuse the beetle, which is looking for food mainly by smelling. However, mint, Basil, dill and other spicy and aromatic cultures do not give one hundred percent protection, and it is more difficult to care for them. The basic method of struggle at the present time is “chemistry”.

Preparations that can defeat the potato leaf-eater are presented on the market in all diversity, and this is right: the beetle very quickly develops immunity to them, means of protection must necessarily alternate. If you use products from different manufacturers, pay attention not to the trade name, but to the active substance – it is necessarily indicated in the instructions for use.

READ  Pros and Cons of Various Types of Solid Fuel for Boilers: Coal and Peat

Systemic insecticides are drugs that are absorbed into plant tissues and make it inedible or poisonous to pests. Convenient option – processing of tubers at planting systemic insecticide of long action (as a nice “bonus”, such funds to protect and wireworm). 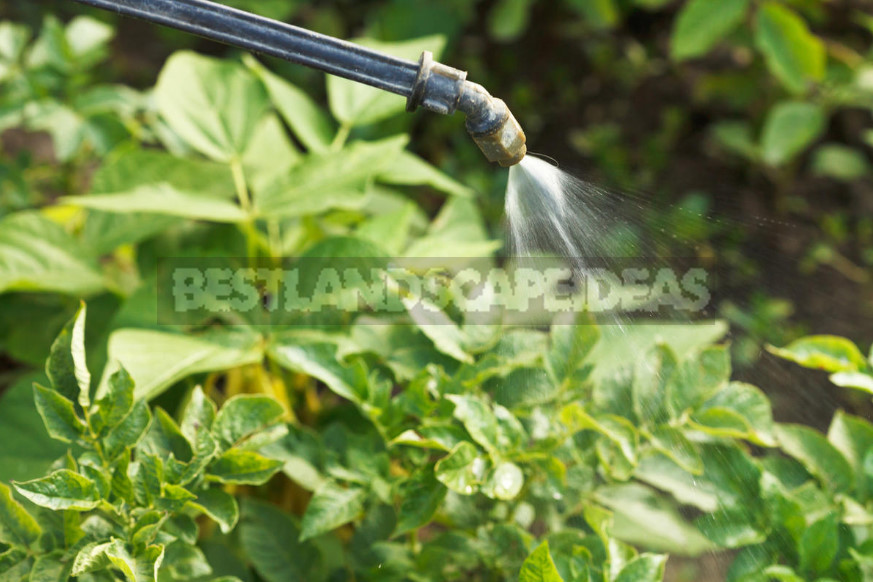 Such drugs can be used in the appearance of pests, and for prevention. Spraying of the above-ground part is usually less time-consuming and more familiar, and the protective effect of solutions lasts at least 3 weeks. 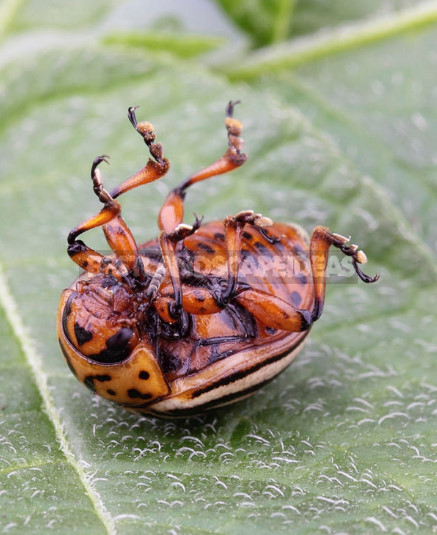 Nevertheless, there are cases where a stronger remedy is required: either there are too many pests (year on year is not necessary, and there are outbreaks of numbers), or they have managed to develop resistance to any substance. 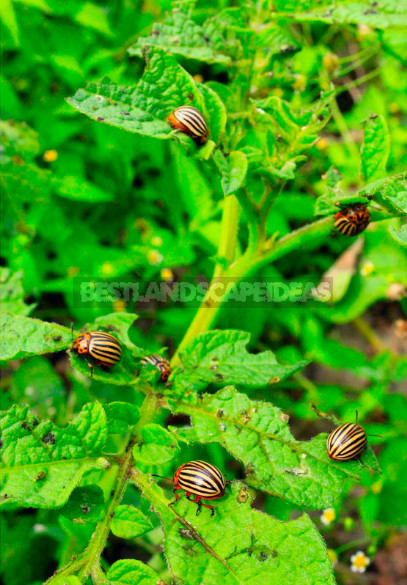 In professional Agrochemistry, tank mixtures are widely used, when 2 or more drugs are simultaneously poured into the sprayer. Often they reinforce each other, and at least it gives a significant saving of labor. In Amateur gardening tank mixtures are not yet very common, and not all gardeners have an idea of what and how you can mix (and some drugs may not be compatible, chemistry – a thing thin).

The triple effect in this case is achieved by preparing a solution of 2 components. The first of them is a combination of the classic drug and potash fertilizer, that is, treatment from pests is combined with foliar feeding, and potatoes are very responsive to the introduction of potassium. This chemical element increases the yield and marketable weight of tubers, increases their keeping quality.

Thus, when a “normal” situation when little or pest for prevention, better systemic insecticides, and in the case of a mass invasion use “lethal cocktail”.

Hedge for Yourself and for Posterity
Purchase and Planting of Fruit Seedlings
How to Get Rid of Whitefly in the Greenhouse. Proven Way.
Flower Carpet in Brussels 2018: Show Flower Carpet