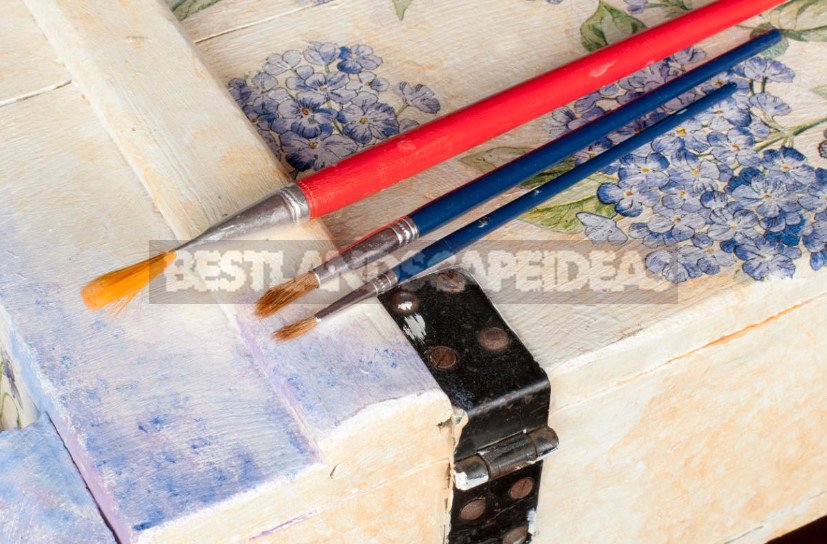 The decoration and upgrading of furniture is extremely popular. On the Internet there are many examples of how this can be done. Furniture remake of famous designers, setting an example to the rest of the citizens. And the citizens themselves do not lag behind, creating their own hands real masterpieces.

Among the different ways of decoration, perhaps the most famous and popular is decoupage. Decoration of various items in this technique involved a lot of needlewomen. It is perfect for decorating furniture. After all, it was she who once initiated the decoupage. 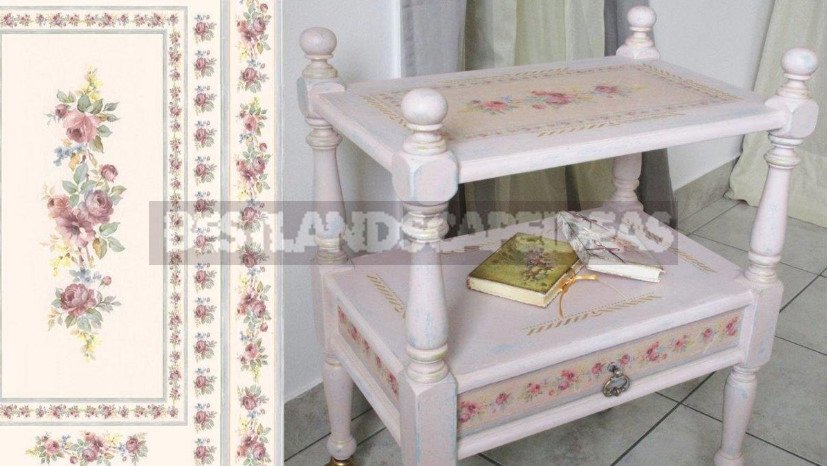 At least, I made the technique of paper applications on the furniture in demand. It is worth trying your hand at creating such objects of arts and crafts.

Decoupage. From the middle Ages to the present day

Furniture has always been a reflection of architecture, repeating in small forms the same techniques that can be seen on the facades of buildings or interior decoration. When the Renaissance gave way to the Baroque, furniture manufacturers began to use flat shells, cartouches, garlands of flowers, supported by plump cherubs and other elements, demonstrating the expression of quirkiness and a penchant for frills that distinguish the luxury Baroque palaces and cathedrals. 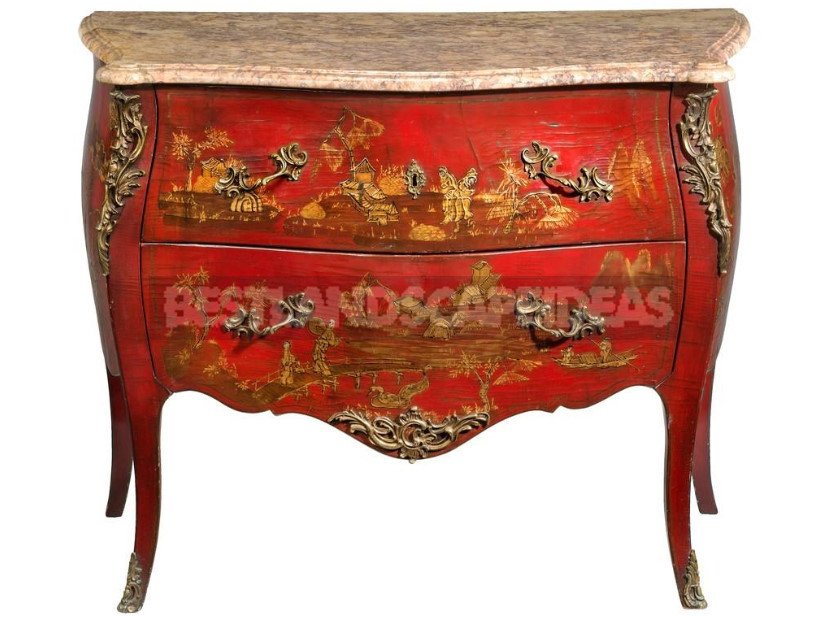 The furniture was decorated with intricate carved details and paintings, on which famous artists worked. Naturally, the work of a professional painter, as well as carving, inlay, marquetry are expensive — not everyone can afford such a furniture set.

But, as you know, demand creates supply: to please consumers, carpenters and cabinetmakers began to make furniture, very similar to expensive samples, but much cheaper. They replaced the painting and partly carved reliefs with paper applique, cut and pasted, and then covered with numerous layers of lacquer.

The greatest distribution of this method of furniture decoration received from Italian masters. Formed the whole direction of Lacca Povera, that is lacquer furniture for the poor. 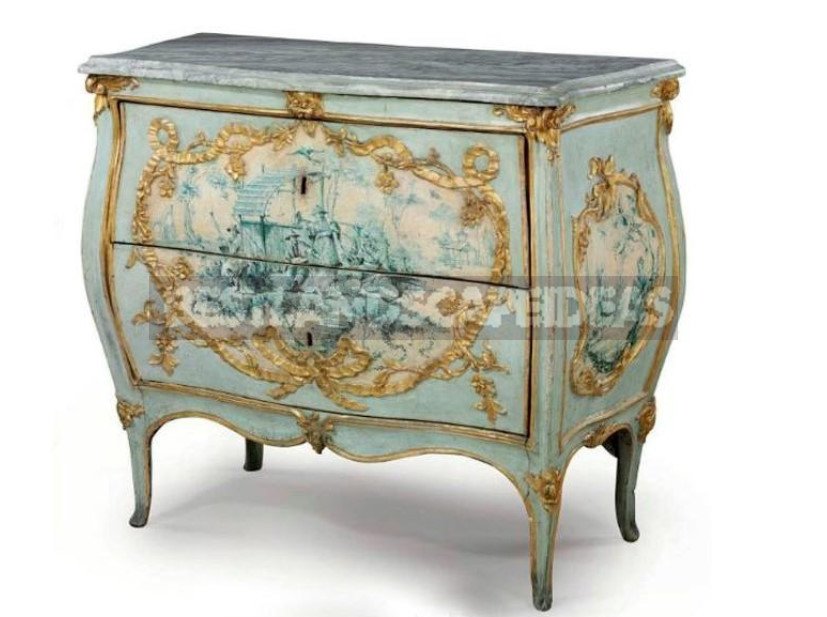 A new technique of an application became known as decoupage, from the French word découper — to cut. Although it was not so new: the first items, decorated with carved pictures, appeared in the Middle ages. At the end of the XVII century in Europe it’s another fashion craze — chinoiserie, or Chinese. Became popular items in the Chinese style, including Chinese lacquer furniture with painting or inlay.

Then the hand reached the peak of its popularity. Carving pictures earned a living master furniture makers, and kings and Queens were fond of making fine crafts, for which the court painters made special drawings. 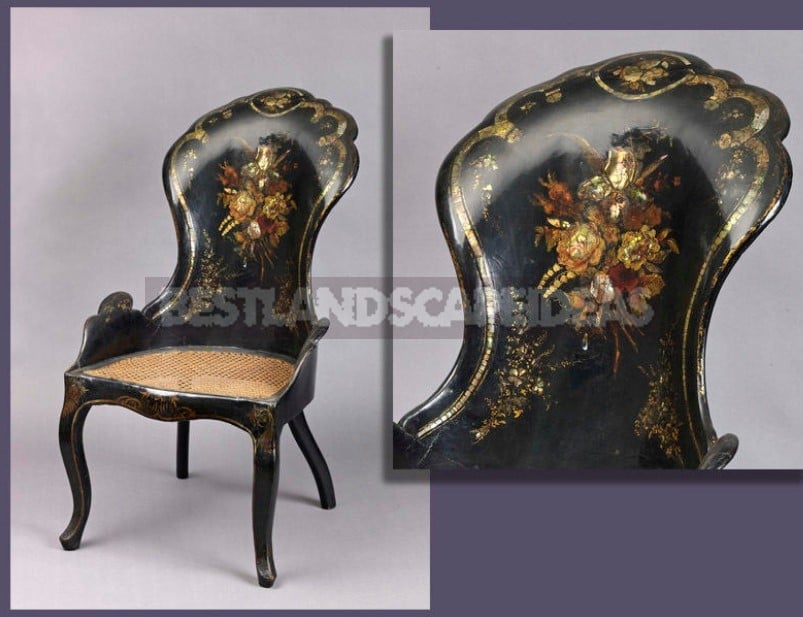 Time passed, fashion changed, and decoupage did not lose its popularity. In the era of Queen Victoria in England were on sale the first collection of decoupage cards, and representatives of all walks of life while away the time for cutting and pasting pictures on household items. This hobby has not passed the New world, becoming a hobby of many Americans.

Now decoupage is experiencing another peak of popularity, and the application on household items has grown from the pastime of Housewives in the original form of arts and crafts. Modern technology has given new opportunities, and today decoupage (as in the XVII century) has become an equal technique of furniture design. 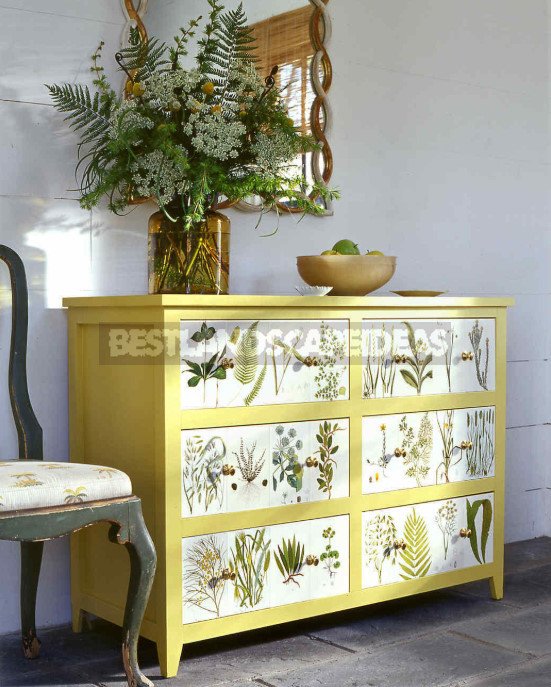 Although decoupage and called a kind of application, but there is a radical difference. In the classic application figure silhouette, and the image is simplified, made up of individual elements. The isolation of parts of the picture from the background is one of the decorative features of the application. 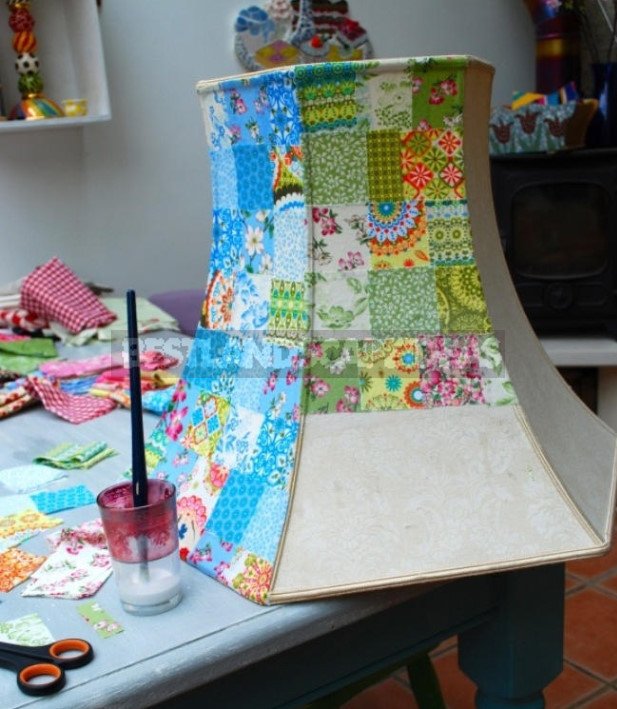 In the decoupage technique, on the contrary, the main task of the master is to hide the border of the fragment cut from the paper, to merge the picture with the background as much as possible, to create the impression that the image is drawn, not glued.

Look, for example, how organically the glued drawing is inscribed in this work. The texture of the base is part of the composition, the texture of the wood and its flaws are decorative elements, not defects that need to be hidden. 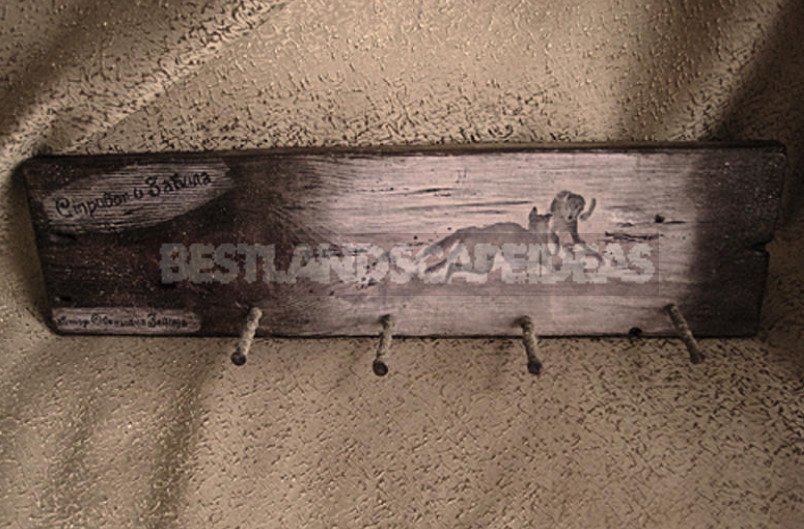 To hide the border of the glued picture as much as possible, use images printed on thin translucent paper. One of the common materials for this craft is ordinary paper napkins or disposable handkerchiefs with bright patterns. 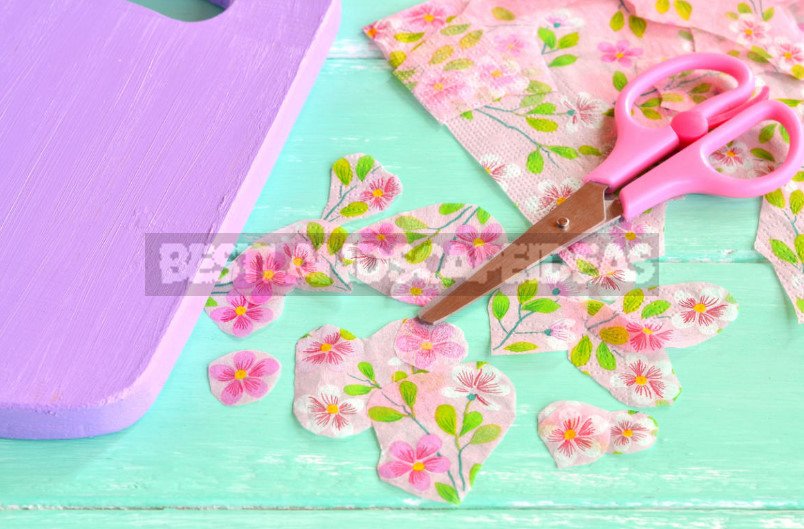 You can use ordinary table napkins, but we sell and the special decoupage. Although among the pros it is considered a material for beginners: masters use decoupage cards or any image — from magazine illustrations to drawings printed on the printer. 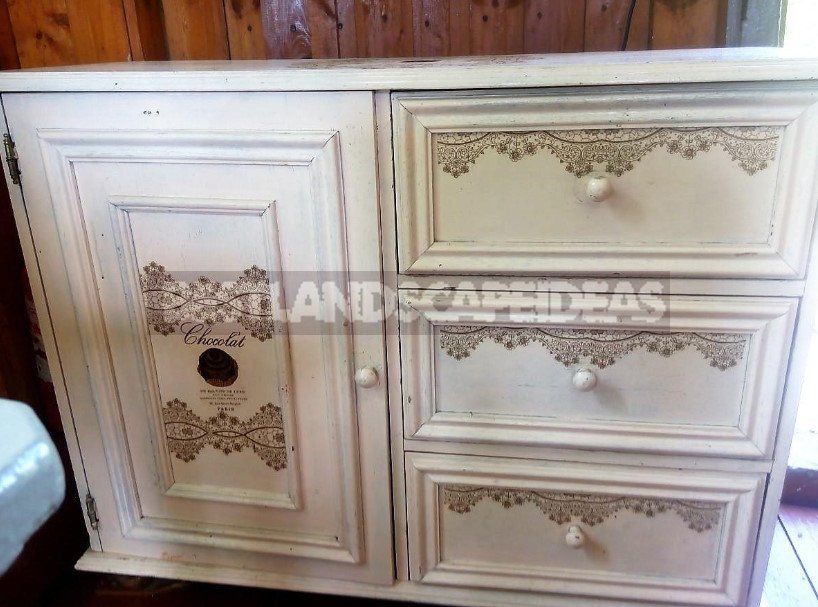 This allows you to not be limited to the standard set of “flowers, reindeer Santa Claus, pastoral chickens with cocks”, and create unique things. But coffee illustration, unlike tissue paper, it has quite a decent thickness, and glued to the base, will stand out distinctly. 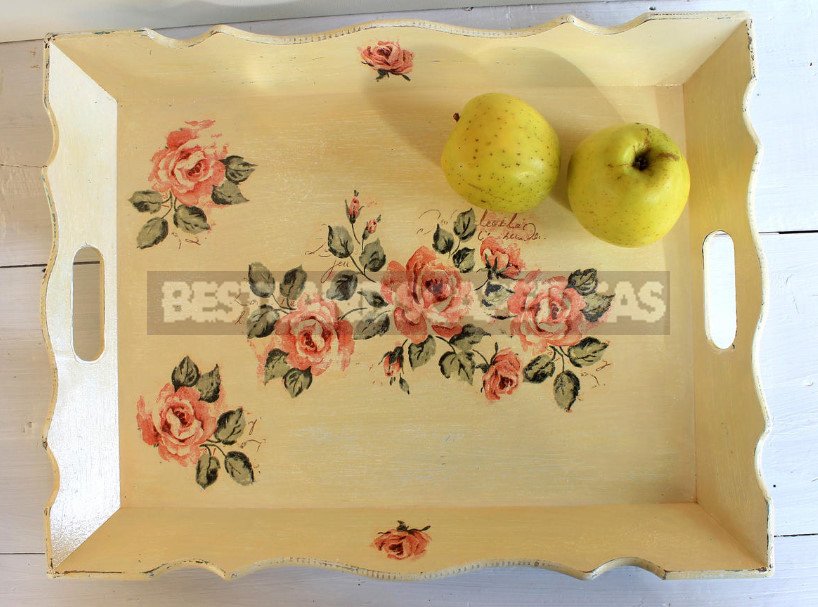 To comply with the basic rule of decoupage (the contour of the cut pattern should not be visible), the wizard uses different methods. For example, scrape too much, then there is a layer of paper on the back side, and then hide the glued transition pattern in the plane of the bases of numerous layers of lacquer.

Or, conversely, if it is appropriate for the idea, hide the seam, emphasizing its outline when drawing details. The most effective method is paper thinning. Figure “implanted”: pre-fix the paint on the front side of the varnish and remove all paper. There remains only the layer of paint on the varnish. 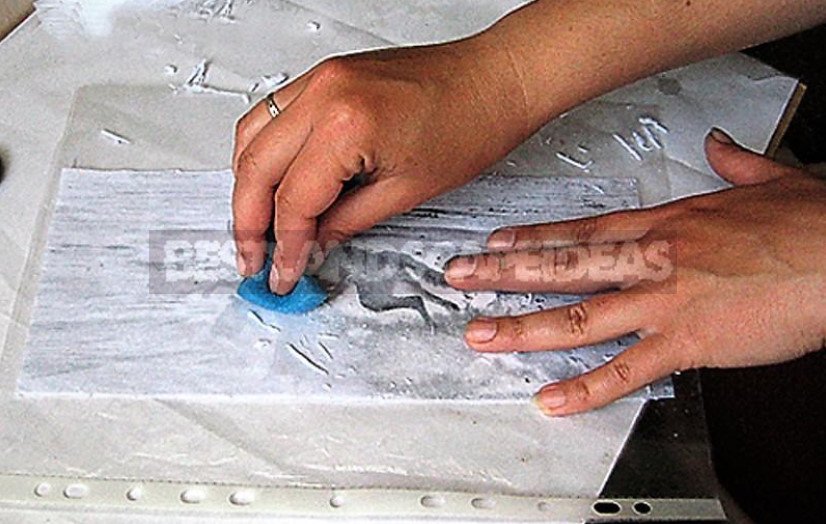 After the end of the manipulation of the pasting pattern, the work is covered with several layers of varnish. As you remember-the more layers, the better.

Decoupage is not as simple as it seems, just pasting a suitable motive can not do. Although there are many master classes on decoupage, to become a true master, not an Amateur who has mastered the cutting pattern from a napkin and sticking it to a jar for bulk products, you will need to master a number of techniques and related techniques. 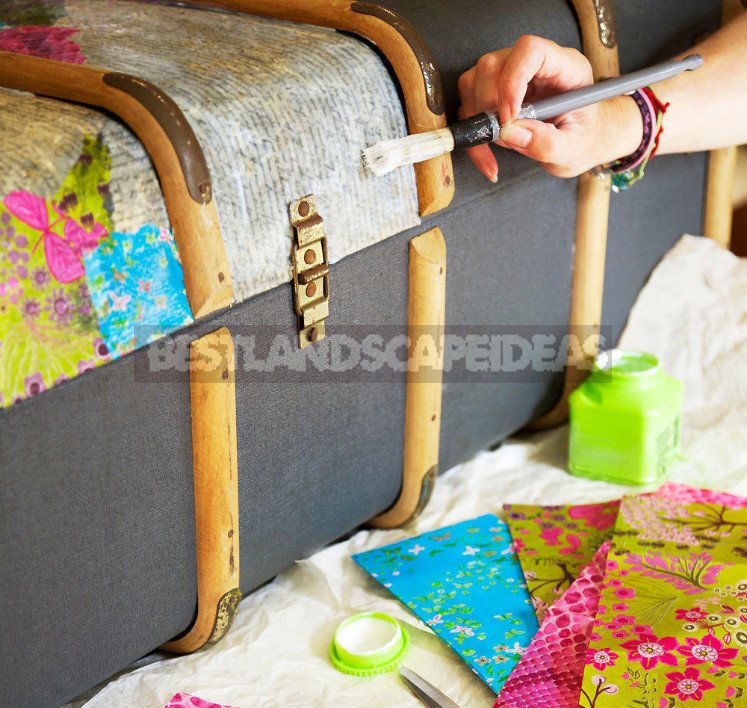 In this method of decoration plays a great importance background, because the pictures used are translucent. Therefore, the preparation of the basis affects not only the accuracy of the appearance of the work. This is an important part of the work.

Basis before applying the pattern, you can paint the wooden surface to wear out, to burn, brushing treat the stain. To create special effects, gilding is used — both preliminary (the very basis) and after drawing; coatings that create craquelure, patina, decorative painting. 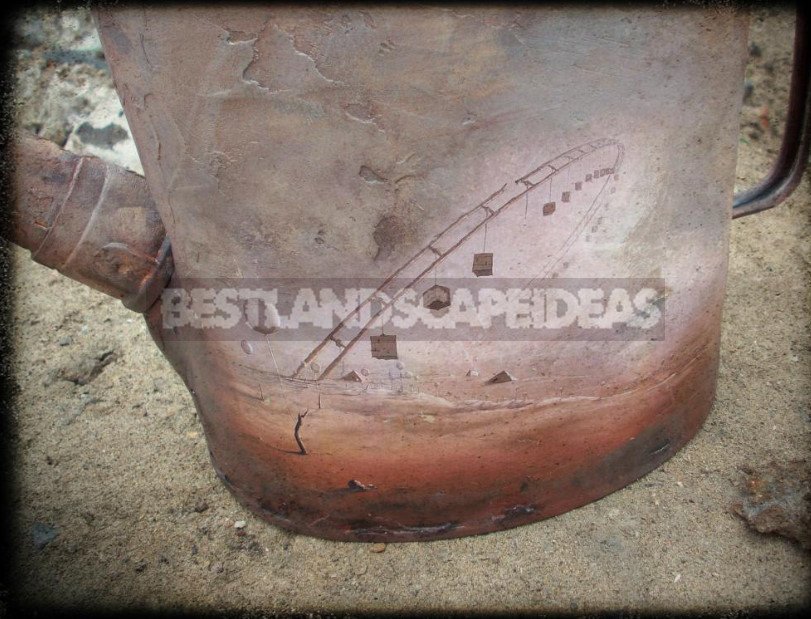 The base does not necessarily have to have a perfectly smooth surface: one of the latest trends in decoupage — decoration pattern texture that simulates stone, leather or other materials. And decoupage can be different: direct and reverse, 3D and reminiscent of patchwork (decopatch). To create a picture using not only paper but also fabric or something else. 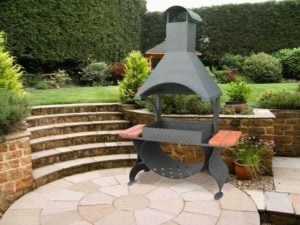 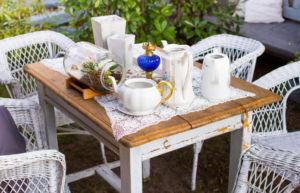 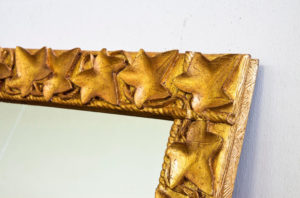 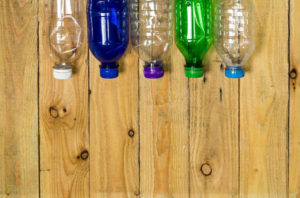 Country Furniture Made of Plastic Bottles

Very interesting post with amazing decor ideas. These all are very innovative ideas that need creativity and dedication to implement the ideas.