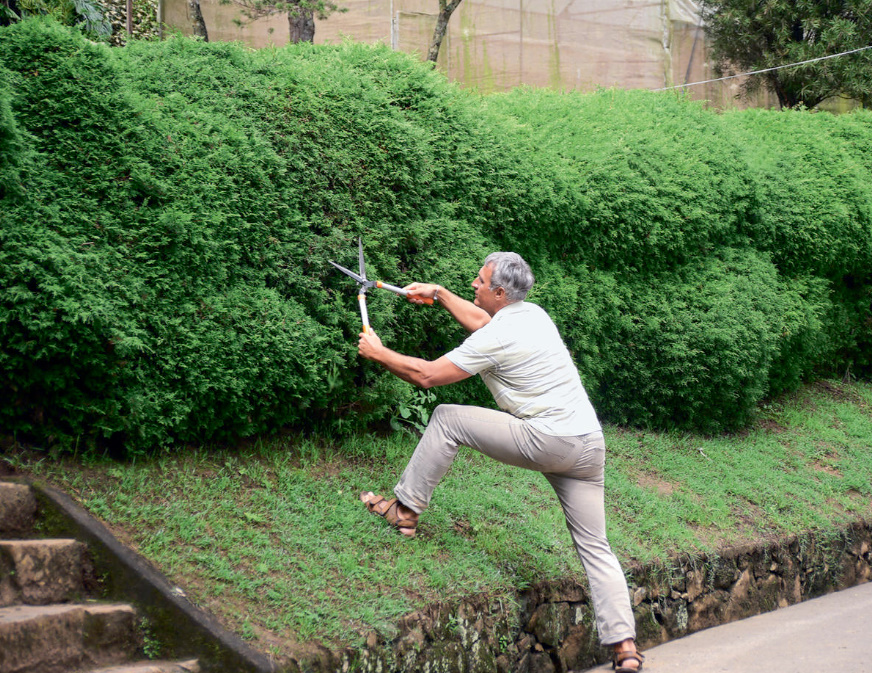 Most often, deciduous and coniferous shrubs are used to create living boundaries of the site. If the hedges are made high by the type of green screen, then small trees can also be used. Green hedges can consist of plants of the same species and variety, or they can be combined (they are grown from different varieties of the same species or even from completely different species).

Even the simplest green borders, fences or screens transform the garden space. We talked about them with the master of topiary art.

Just imagine — an English pensioner John Brooker on the border of his plot raised … a dragon. Green, from the bushes. This original idea brought him not only fame, but also constant troubles, because it takes every two or three weeks to maintain the shape of the original fence. But—what a beauty! 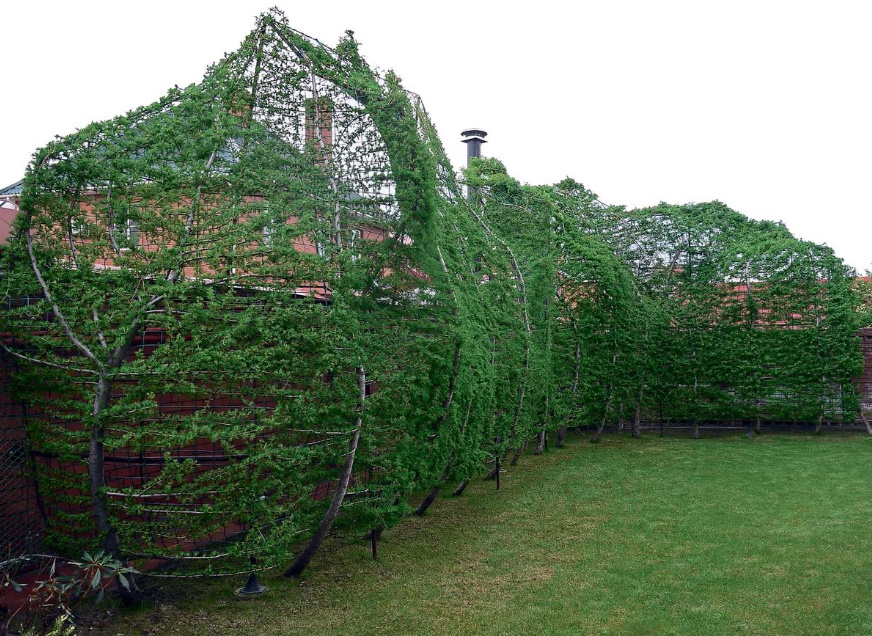 By appointment, living borders are very diverse. On the one hand, it is possible to create a living fence, as impervious to outside intrusion as a fence made of inanimate materials, it is used to protect the site.

On the other hand, green hedges can serve exclusively for decoration, especially if they are grown from low flowering shrubs. But most often, living fences combine aesthetic and utilitarian functions.

According to the method of creating hedges, there are formed and free-growing ones. An informal hedge of lilac or rosehip looks great, but plants in it also need to be cut. Only in this case the pruning will be sanitary, not artistic. 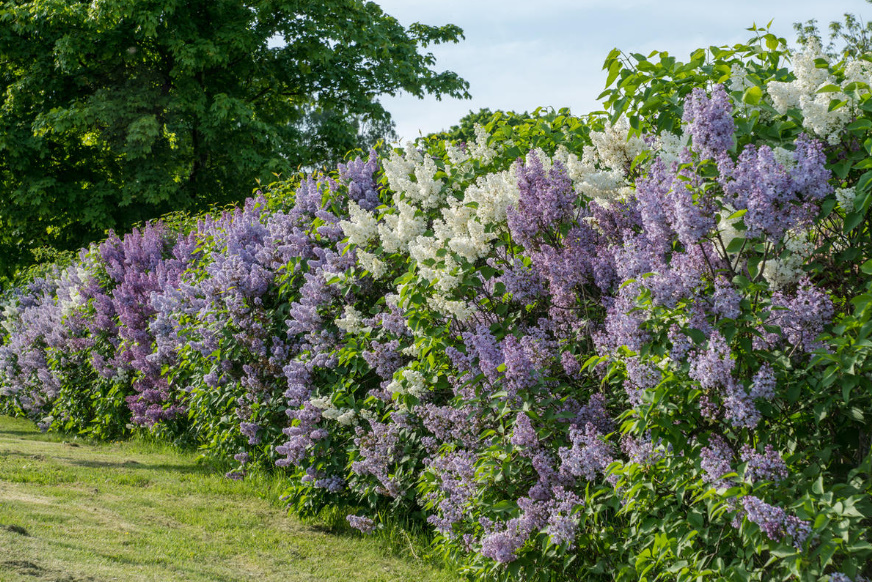 In this article we will analyze in detail the process of cutting and pruning formed hedges from deciduous shrubs. However, you can generally use the proposed algorithm of actions for cutting “fences” from coniferous plants. 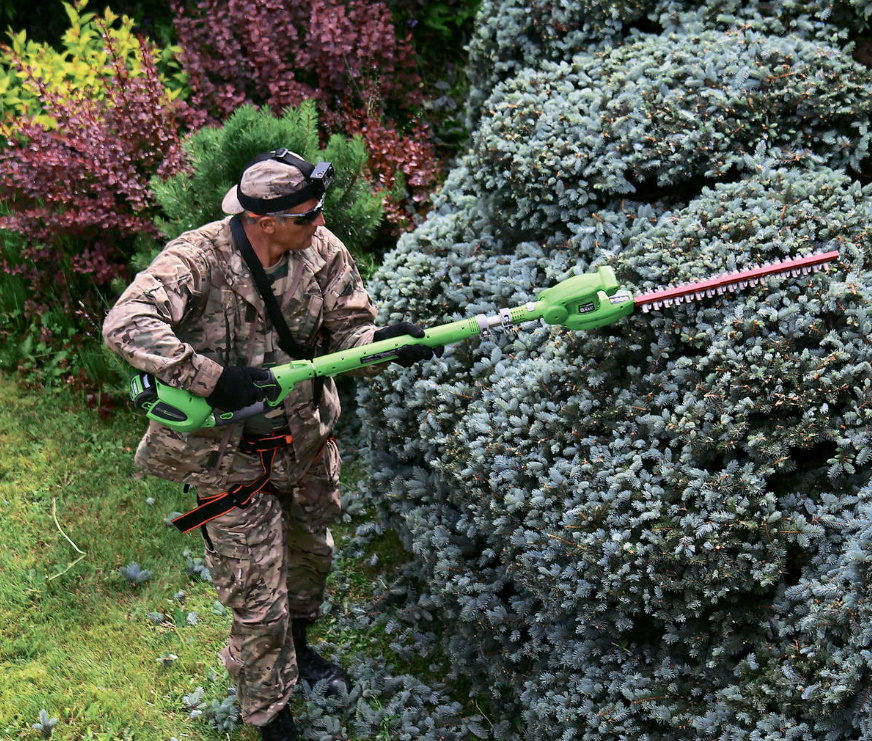 In the middle lane, as a rule, bubble-fruit trees, spirea, Cotoneaster lucidus, hawthorns, irga, Philadelphus, Symphoricarpos, Ribes alpinum and others are used to create hedges.

How to start forming a hedge

The formation of a hedge of hardwoods should be started in the spring, but before the sap flow begins. Rigid formation of conifers is also better to produce at the same time of the year. Supportive haircuts can be performed during the vegetative period as fouling occurs. 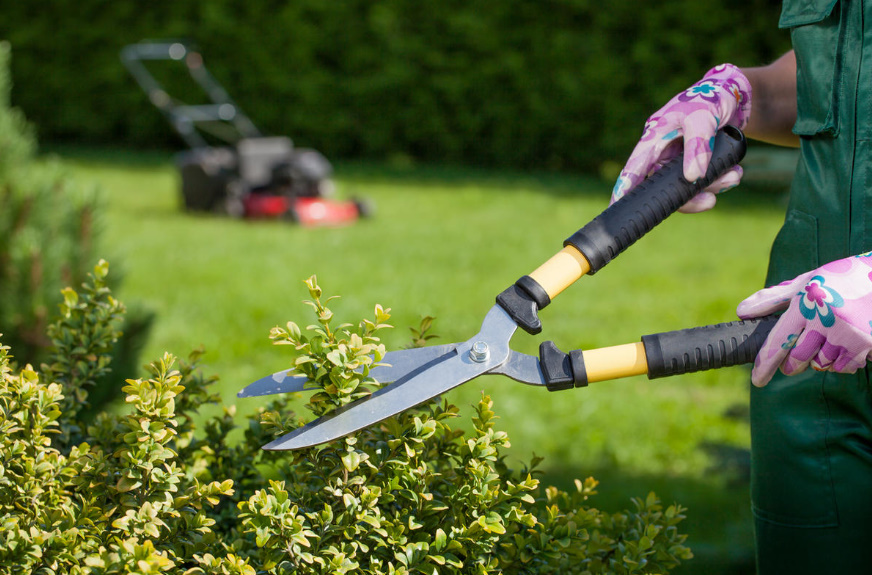 The formation of a deciduous hedge begins with planting. Young bushes, even if they consist of several twigs, must be shortened immediately after planting. Seedlings are immediately leveled to one height. 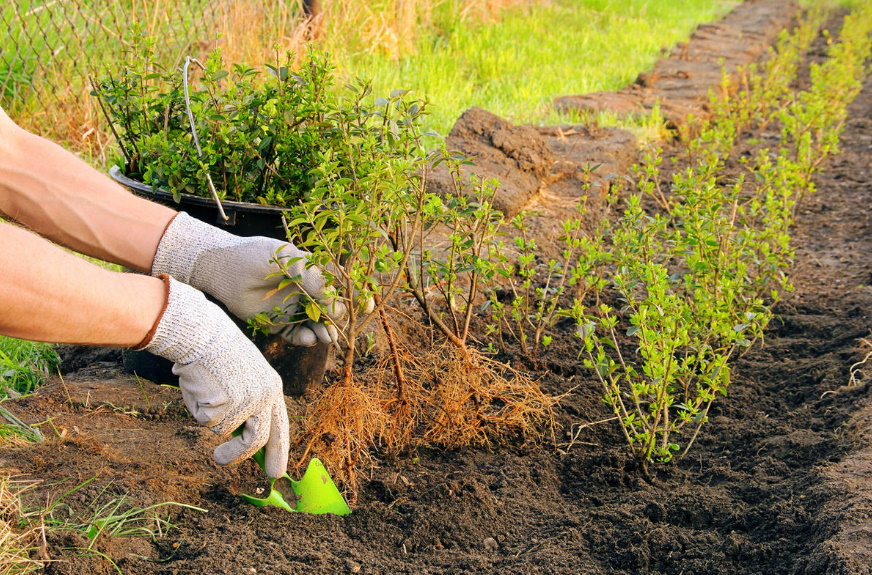 The task of formation: to cause the necessary branching at the base. This will create a good foundation. Do not immediately expel shrubs in height, be patient. For example, it will take 5-7 years, at least, to form a two-meter-high hawthorn hedge.

In order for the green fence to turn out thick and beautiful, it should be cut at least a couple of times per season. The frequency of supportive haircuts depends on two factors:

Important: it is better not to touch the fence of conifers in the year of planting.

An ordinary straight hedge in the section should resemble a trapezoid, where the base is wider than the upper line. Let me explain why this is necessary. The lower branches of the shrubs themselves grow worse than the upper ones, because they do not have enough light. And we must create such conditions that the sun’s rays still reach them. If you immediately cut the hedge in the shape of a rectangle on the cut, then soon the lower branches will begin to suffer, losing foliage. And ugly bare “legs” will appear.

How to form the right trapezoid

In order to avoid this and form a good trapezoid, first cut the lower branches, maintaining the line. Anyone who does not rely on his eye can pull a rope between the pegs along the entire length of the fence right on the ground.

Then we cut the sides, maintaining an inclined line. You can pull two ropes on pegs and set them the width of the upper part, which should be noticeably narrower than the bottom. And only after passing the sides on both sides, we start cutting the upper part. The top grows faster, it has the least problems. Even if the line is not quite smooth at first, it is easier to fix it. But the formation errors in the lower part are much more difficult to fix. 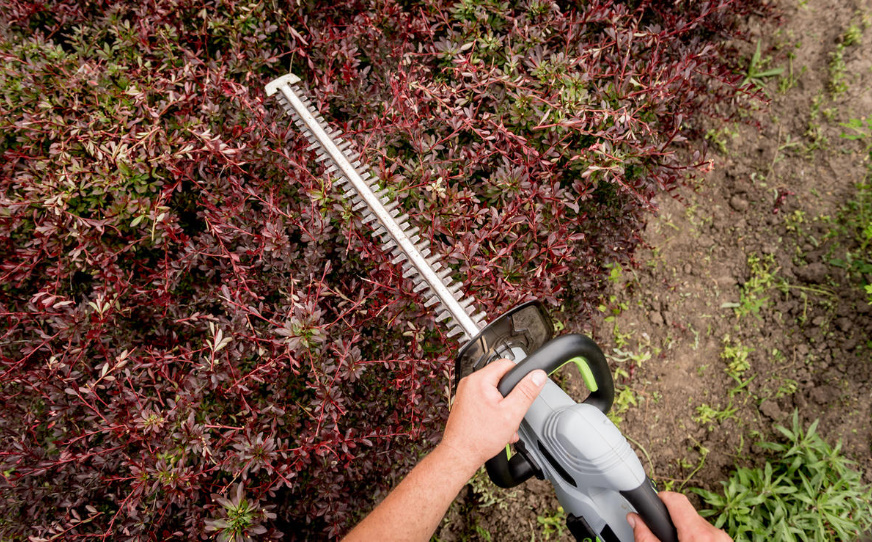 The main work is inside the hedge

Most of the work of the topiary master in the hedge is still not visible. After all, it is necessary to cut not only from the outside. The main task is to remove excess branches inside the crown of the shrub and transfer the green mass to the periphery. If you do not do this and do not remove the thin, weak, incorrectly growing branches inside, then sooner or later the shrub will begin to ache and wither. Weakened branches are more often affected by various infections and fungi.

Important: thin out the crown should be as it thickens.

The secret of the perfect shape

As for the aesthetics of hedges: you are free to choose the shape! The fence can be rounded, twisted with a screw, go by steps or tiers. It can be cut in the form of a living dragon, imitate a mountain range or random ocean waves, that is, have an absolutely abstract form. Such living borders look extremely impressive, and supporting haircuts require less, because the deviation from the forms will not be so noticeable.
But in any case, the more often you cut the hedge, the thicker it becomes. This means that the more beautiful the living boundaries of the site are.

Convenience and frequency of haircuts

I am sometimes asked, and maybe, over time, the plants in the hedge will slow down their growth and come to terms with the given shape? That is, in fact, they are asking if there will come a day when the green fence can no longer be cut. I answer — no, you will always have to cut it, maybe with time — a little less often.

By the way, it is necessary to choose the height of the fence not only guided by aesthetic principles, but also thinking about the convenience of maintenance. Most often it reaches 80 cm — it is at this level that it is convenient to carry out a haircut and it is easier to keep the line. The next milestone is the height at eye level, it is also convenient to maintain a straight line here. It is somewhat more difficult to cut low curbs, because in this case you have to work in a bent position. And for high live screens or walls, some additional equipment will already be required, at least a stepladder. 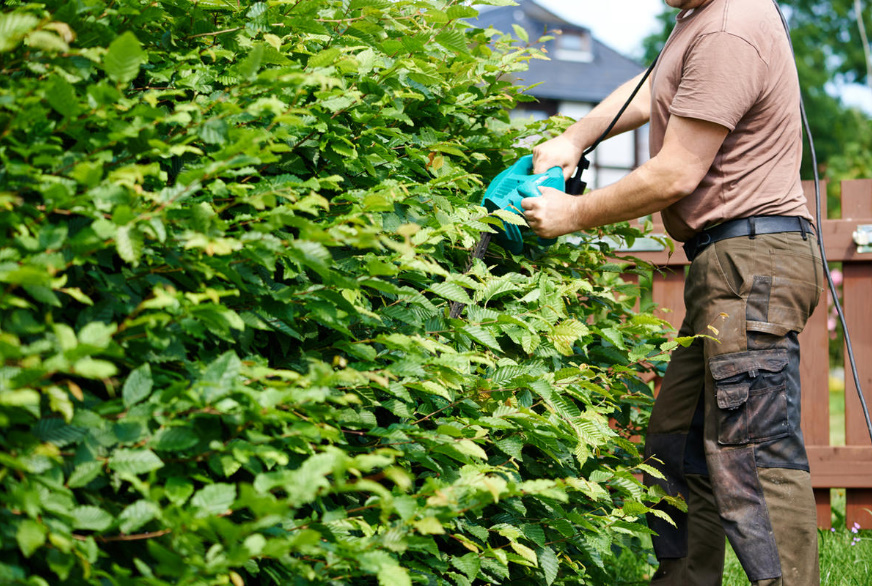 Important: working at height requires certain qualifications, so beginners who do not have experience should not take it up.

Motor—scissors or brush cutters are excellent assistants to gardeners and gardeners, and to us, topiary masters. Yes, they give a more “shaggy” cut, but it is much more convenient to “keep a given line” with their help, and the productivity of work is noticeably higher.

Hedge forming is a labor–intensive business, so I use various models of brushcutters, mainly electric-motor ones. The choice of such tools is now very large, for any task and for any wallet, everyone should find their own model, which will be as comfortable as possible to work with.

With small hedges near the house, it is quite possible to cope with ordinary garden shears. By the way, they do not interfere with walking after the brushcutter to make the cuts more accurate. But no matter what tool you use, the cutting surfaces must be well sharpened and clean. This is the golden rule of the gardener! In motor knives, knives are also subject to sharpening or replacement with new ones. 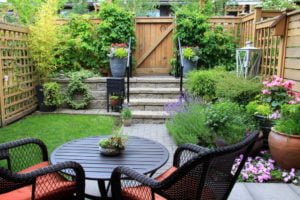 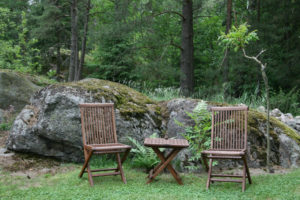 Landscape Stone in the Garden: How to Do Well, Not Just “Fashionable” 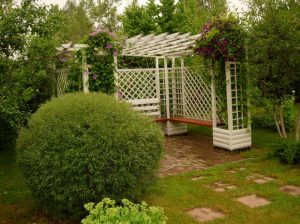