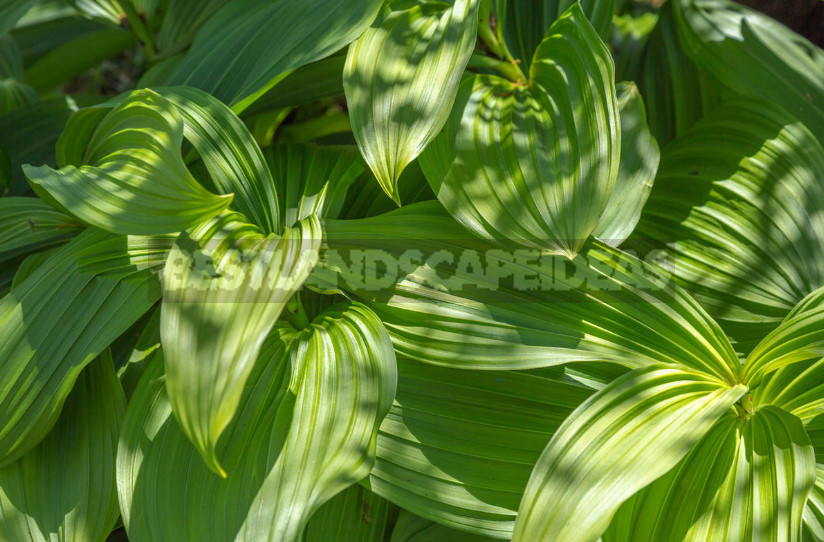 On open glades, floodplain meadows, in the valleys of rivers and streams, you can find an unusual plant that stands out sharply among the rest of the grasses for its monumental and majestic views. The height is not less than a meter, and often much higher, with large oval-oblong corrugated leaves, it becomes especially beautiful at the time of flowering. At this time, put forward high peduncles, bearing brush white, greenish or maroon flowers.

I have known Veratrum since childhood – I had to meet it on the taiga glades of forests, where it forms the whole thickets. Let’s get to know this unusual plant closer. 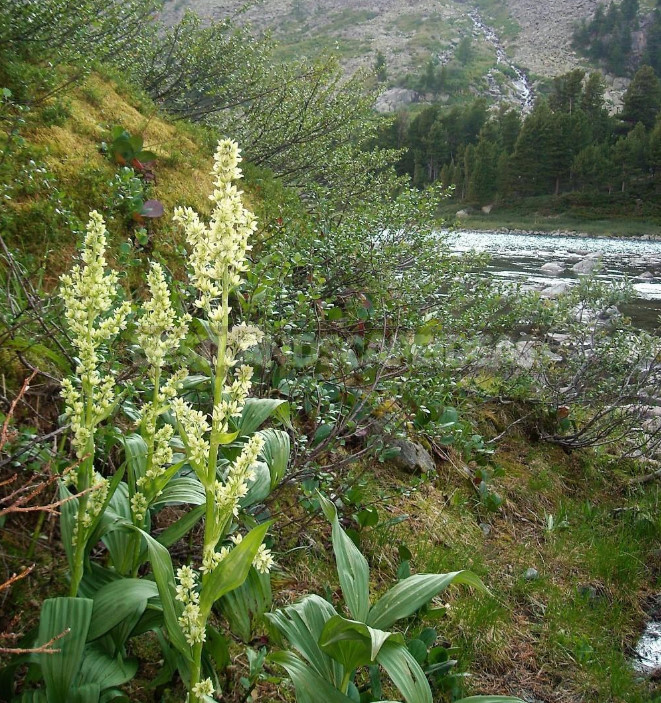 Veratrum belongs to the Melanthiaceae family and includes 27 species of mainly herbaceous perennials. They are widespread in all countries of Eurasia and in the Northern hemisphere in General. 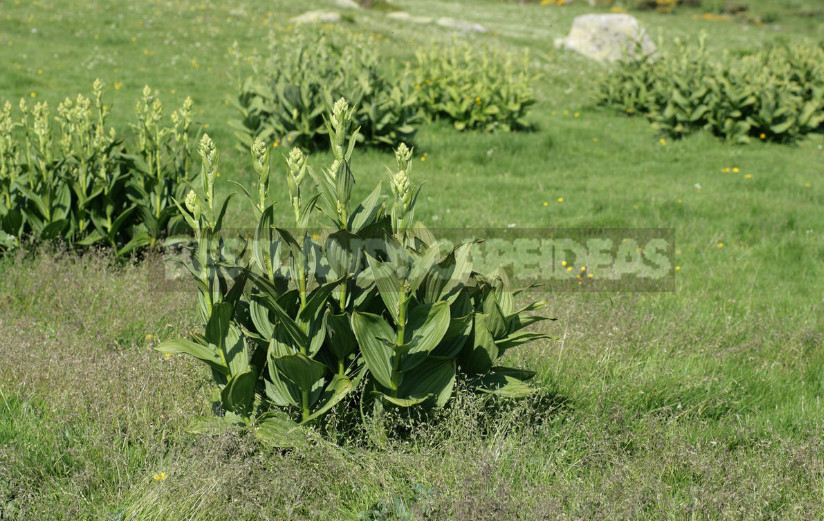 All species – powerful plants with strong straight stem and characteristic large (up to 30 cm in length) leaves. They have a slightly elongated elliptical shape, sessile, stalk-integral, folded leaf blade.

Veratrum is quite close to the Lily family, given the structure of leaves and flowers. Under the ground is a short, vertically going rhizome, from which departs a lot of thin roots. The flowers are large enough, collected in paniculate inflorescences. Each flower has 6 petals and 6 stamens. 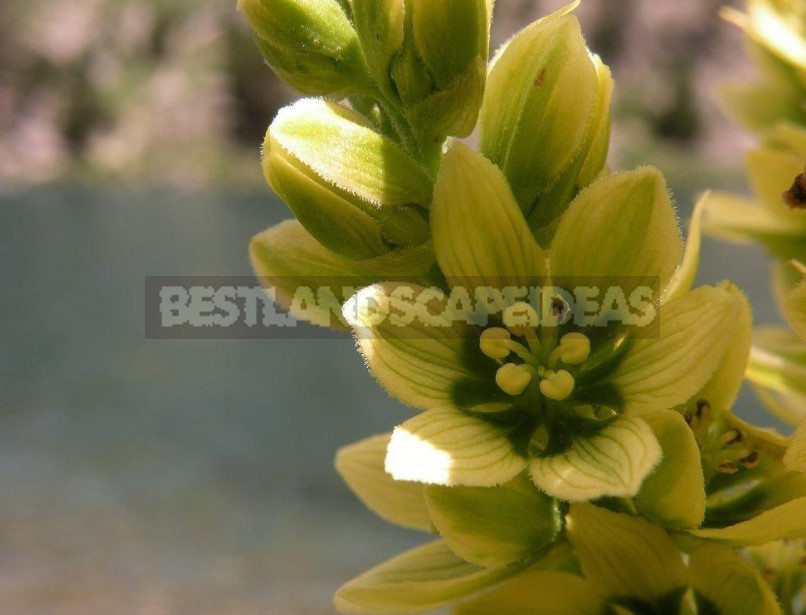 Veratrum are long-livers. They live up to 50 years, and begin to bloom at the age of 10-15 years. The plant is quite beautiful, but this beauty is dangerous: all Veratrum extremely poisonous. They contain alkaloids in their composition, in particular veratrin.

Veratrum lobelianum got its name after the naturalist Matthias Lobel, who lived in the XVI century. Otherwise known as the puppeteer. The plant is fully consistent with the description given above, and is a high powerful Bush up to 160 cm in height. 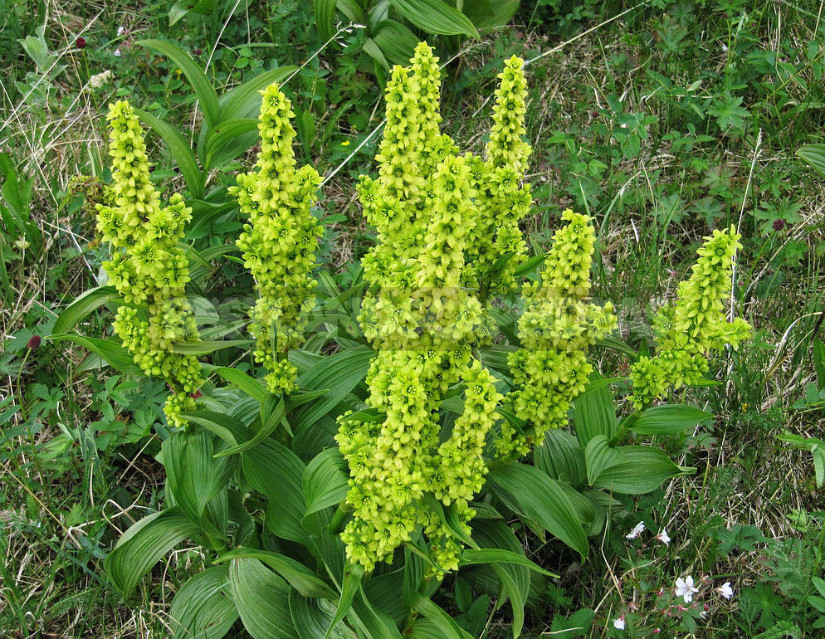 It differs from other types of color, size and shape of flowers. They are light, yellowish-green, quite large – up to 2.5 cm in diameter, consist of six wide-open petals. Collected in brushes, which in turn form a panicle up to 60 cm in length. Flowering lasts from June to August, after which the fruit box is formed.

Veratrum album grows in Europe, where it is found in meadows with rich moist soil, on floodplains of rivers and springs, can grow in the Alpine zone of the mountains. Slightly less than the previous species: the height of the pubescent stem varies from 50 to 150 cm Leaves up to 20 cm long, wide lower, upper much narrower. On top of the leaf blade is smooth and folded, on the underside there is pubescence. 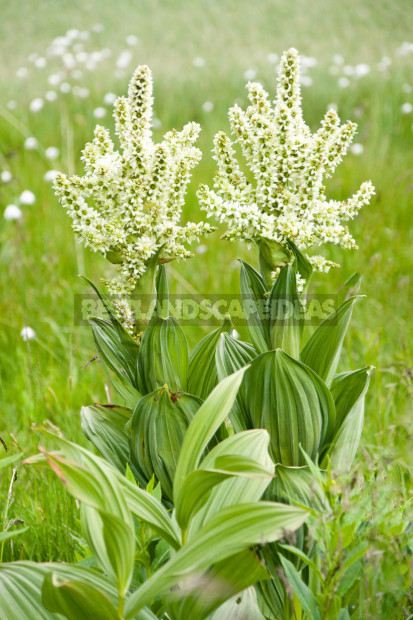 The flowers are white and green to 1.5 cm in diameter bloom in July. Flowering lasts a month. Rhizomes of this type are used for the preparation of tincture – means against insect pests. It is also used in folk medicine.

Veratrum nigrum is widespread in our country – from the European part to the Far East, as well as in China and Japan. Powerful thick stem reaches 130 cm in height, leaves are very large – up to 40 cm, corrugated. 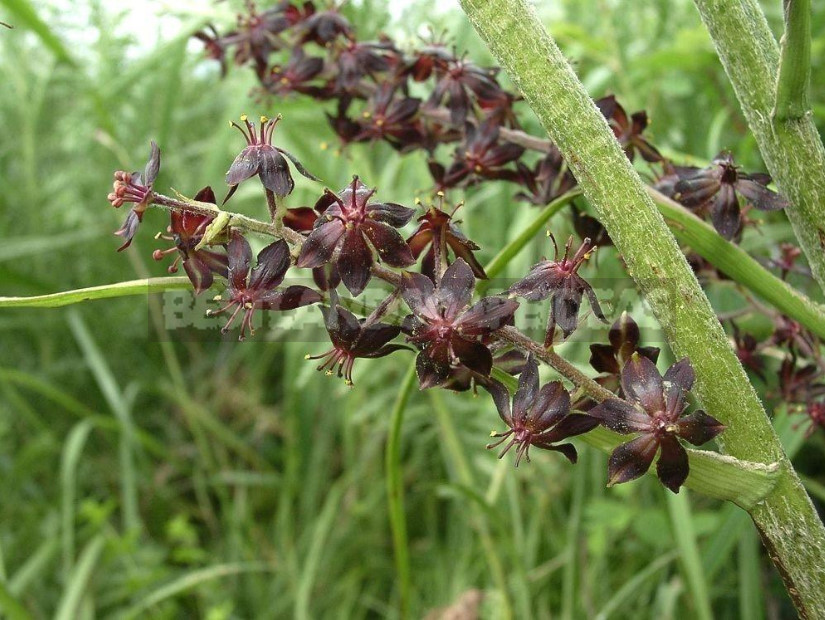 During flowering, the plant looks very decorative: the inflorescence in the form of a large panicle consists of numerous, densely arranged dark red with a black tint of flowers up to 1.5 cm in diameter. Flowering occurs in July. Unpretentious and very winter-hardy appearance, does not like stagnation of water.

Homeland Veratrum viride-wetlands and wetlands in the taiga zone or deciduous forests of North America. Grows no more than 100 cm tall. 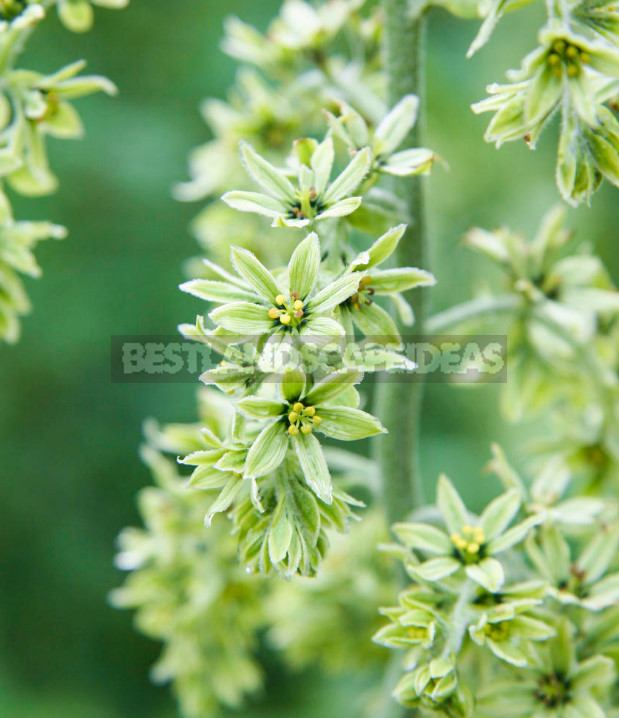 The leaves are large, oblong, wide-oval, narrowed upwards. Light green slightly pubescent flowers in diameter reach 1 cm Veratrum of this species forms a beautiful paniculate inflorescence, flowering occurs in mid-summer. Tincture of fresh roots of this plant is used for the manufacture of homeopathic remedies.

Veratrum maackii-Eastern species that lives in Japan, China, in the South of the Far East. Grows on the edges of forests, bushes, marshy meadows. 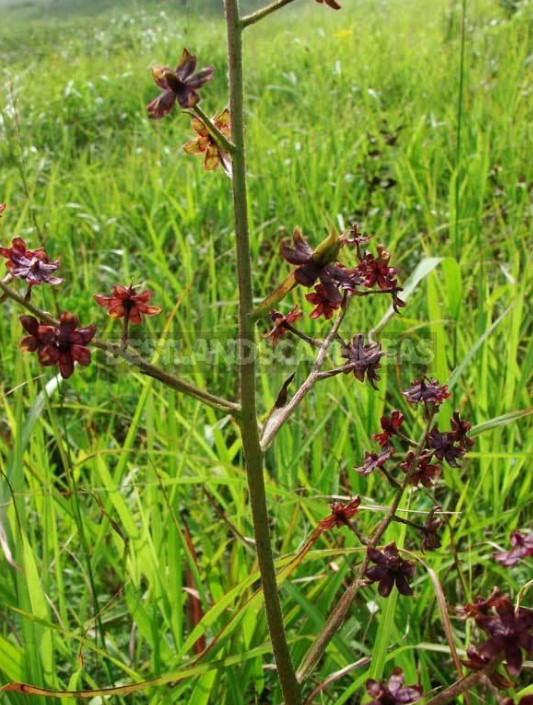 Forms large bushes up to 120 cm tall. Pubescent, with thin ribs stems are elongated leaves up to 40 cm long and 7 cm wide. Inflorescence in the form of a brush or panicle strewn with black and purple flowers up to 1.5 cm in diameter.

The distribution area of Veratrum dahuricum is Siberia and the far East, where it grows on moist meadows. Bush height from 50 to 120 cm, the stem at the top of the pubescent. 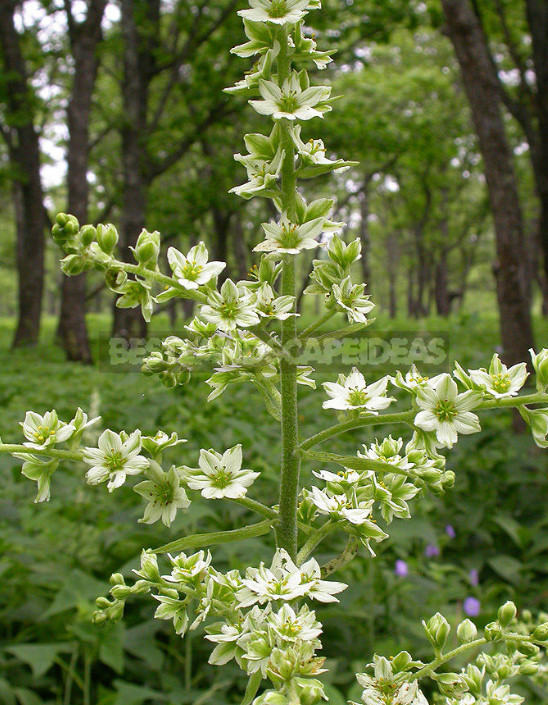 If you decide to grow Veratrum in your garden, it is best to plant it in a slightly shady place and where there is more moisture, you can in the penumbra of trees. Well, if the garden is a site on which delayed spring moisture or water after rain.

The soil is suitable loamy with the addition of sand and well-rotted organic matter-manure or compost, fertile and nutritious. It should be remembered that this plant does not like acidic soil. It is advisable to immediately place it in a permanent place, because she lives a very long time, transfers with difficulty, but she does not need it. 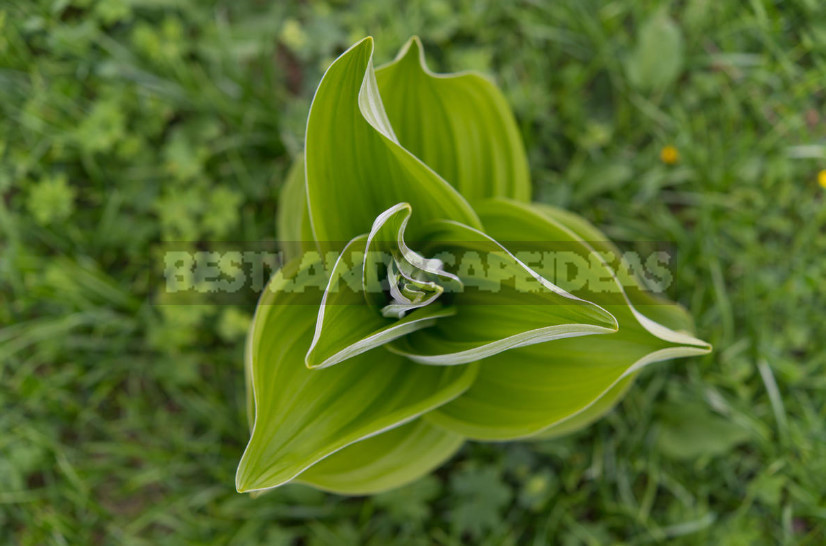 In the spring in the soil under the bushes Veratrum useful to make compost or rotted manure. In the middle of summer when it’s flowering time, the recommended feeding of complex mineral fertilizers. After drying the flowers peduncles are cut, but in the winter the above-ground part is not removed, and left until spring. The plant does not need shelter.

Veratrum can be grown from seed, although you will have to Tinker with them a little. Sowing is carried out in early March in loose light soil to a depth of 0.5 cm Capacity of crops is wrapped in plastic and put in the fridge to stratify 1.5-2 months. After that, the box is removed and placed in a warm place.

As soon as the sprouts appear, the film is removed. Seeds do not germinate all at once, the process can take a long time — up to several months. Seedlings as they grow up are transplanted into a greenhouse, where it remains until next spring. 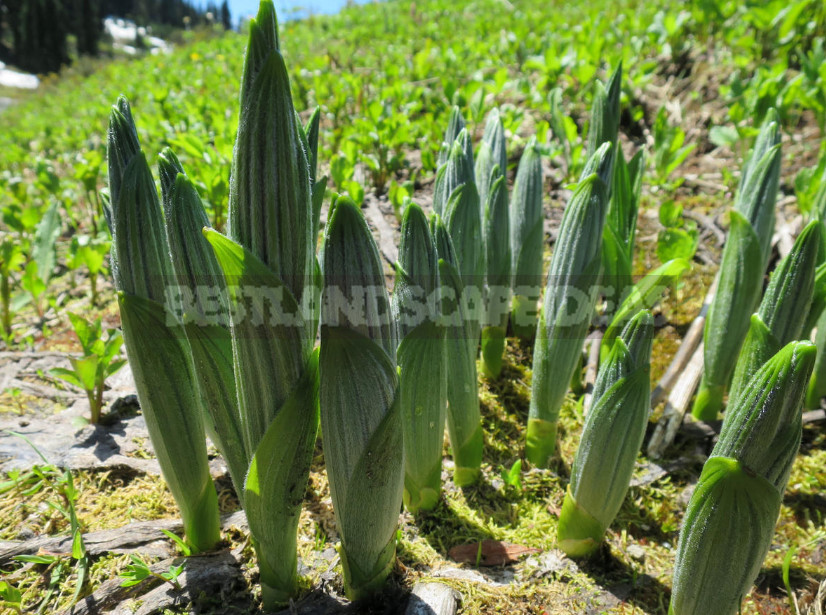 It will be easier to grow seedlings immediately in the garden, but for this sowing of seeds is carried out in the autumn in the ground, choosing a site with loose fertile soil. Shoots will appear in the spring. After some time, they are thinned, leaving a distance between plants of 25-30 cm.

In spring Veratrum can be propagated by dividing rhizomes. To do this, after the appearance of sprouts, dig out the entire root ball and gently release from the ground, trying not to damage the fragile roots. Cut it into parts so that each part should have remained one or two buds. 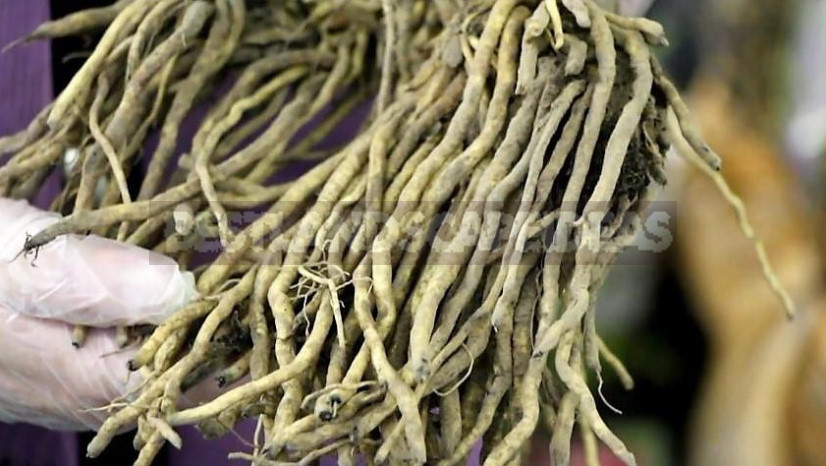 The divided parts are planted in the prepared holes at a distance of 30-50 cm.

Why in the garden of Veratrum

Now think, whether to plant in the garden Veratrum and why. Of course, the plant is very spectacular and decorative. But it is because of its power and monumentality that it is absolutely not suitable for small areas. 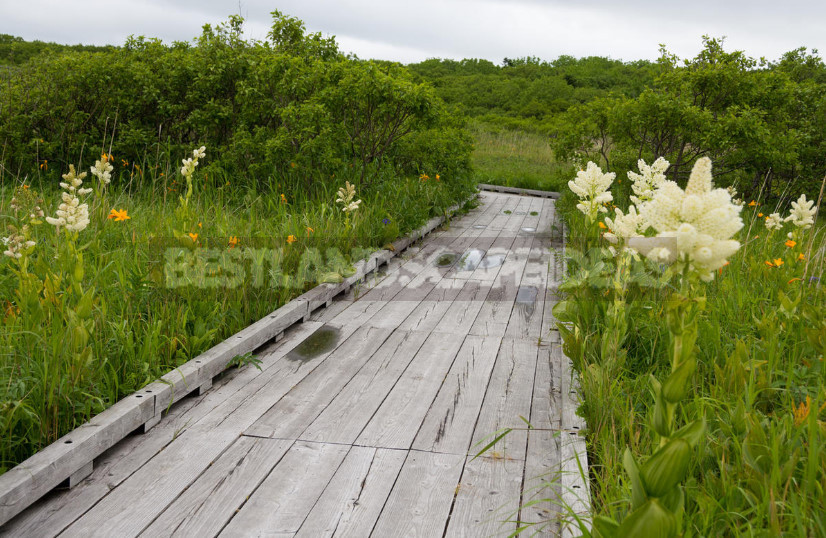 The best place for Veratrum is the large landscaped gardens. It is on a fairly large area of the plant will manifest itself in all its glory. It will look great in a large array, and a single Bush on the background of the lawn, near the pond – too, by the way, quite extensive. Good partners for it will be the same landscape herbs. 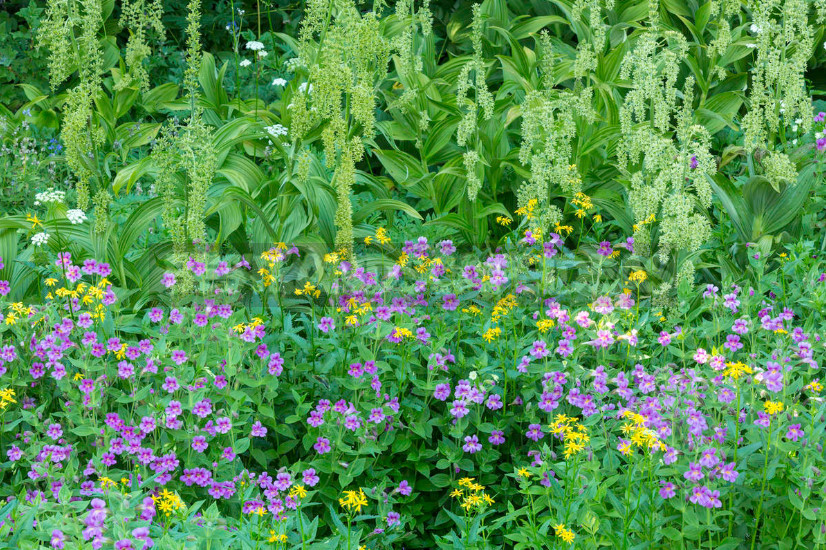 The second reason to think hard before planting Veratrum in the garden is its toxicity. If on your site walk small children, this plant there is no place. Also should not be planted Veratrum next to the hives — bees can be killed by eating poisonous pollen. 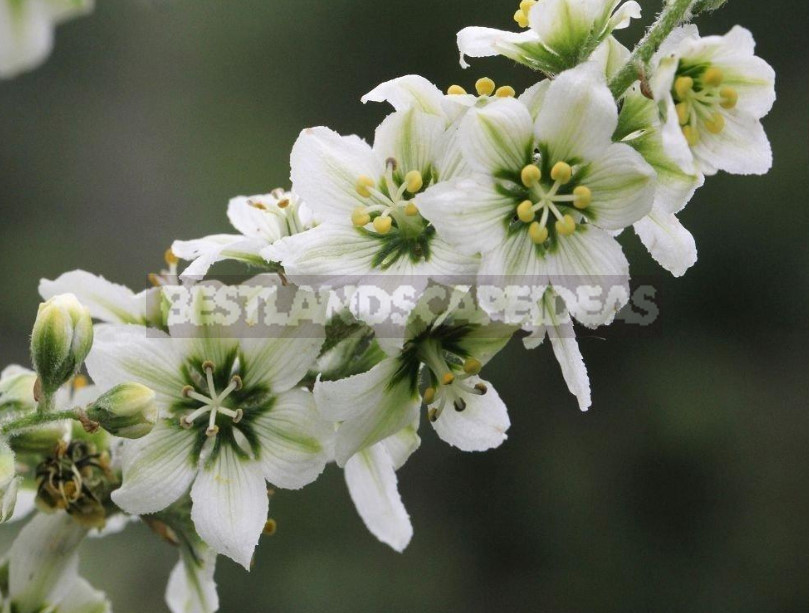 At the same time, Veratrum grass can be used as an insecticide. Its planting repels harmful insects from other plants.

So decide for yourself whether to grow this plant on your site. Maybe it is better to admire it, going on an exciting trip to nature?

Tussilago Farfara: What She is, What She Loves and What She Needs 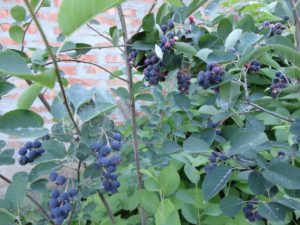 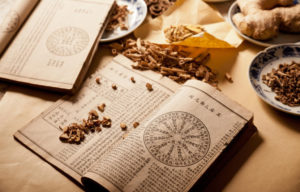 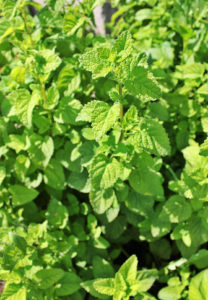