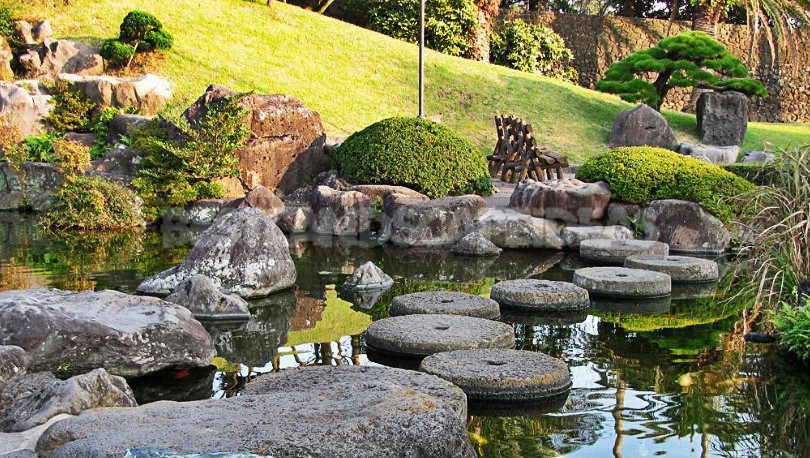 Since July 30, 1992 was opened Bonsai Park “Energetic garden”, world celebrities and the press have repeatedly recognized it as “the most beautiful garden in the world.” Starting in 1968 to develop a wasteland overgrown with prickly bushes, the author hoped to revive the culture of gardening and Korean Bonsai. Creating a model of a world in which all people will love each other, following the commandments of nature, like trees, and will live peacefully, but with courage. At times, when it was very difficult to care for the trees and drag the stones, turned his gaze to the sky. And then every time a voice was heard in the soul: “Live like a tree, following the commandments of nature.”

Usually several people are involved in the creation of the garden: the owner, planner, Builder, gardener, etc. However, this garden was created by the lifelong work of one person – Bum-Young Sung. The main principle which Bum-Young Sung adhered to at creation of the masterpiece – to find “the face of trees and stones”. 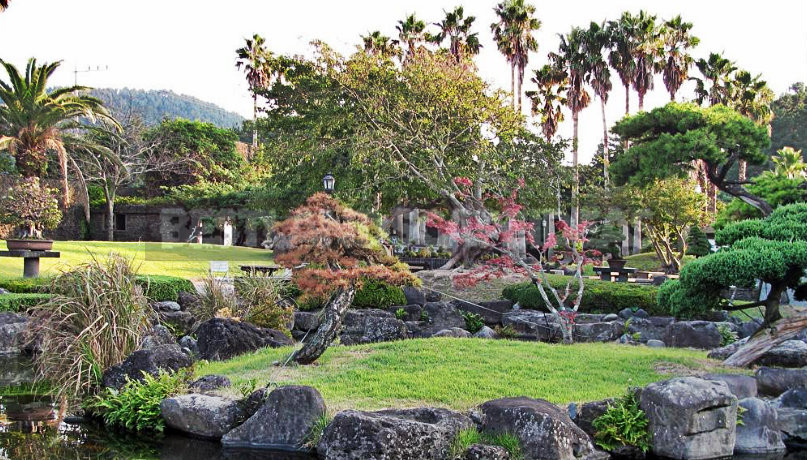 Once visiting Jeju island Bum-Young Sung was so fascinated by its beauty that eventually moved here and found here the meaning of his life. He started creating the garden in 1968, at the age of 29. It took twenty-four years to turn the lifeless volcanic space of the island into a unique bonsai Garden, the work on which continues to this day. During the work on his brainchild Bum-Young Sung faced many difficulties. The government did not always support him, as it was unclear how these activities fit into the plans for the rapid recovery of the Korean economy. Locals laughed at the eccentric — what normal person on the waste ground, in the absence of water, Sewerage and electricity can conceive a garden? Mr. Sung repeatedly tore his back, lay in surgery, but again stubbornly returned to his creation. In 1992, all the necessary licenses were obtained and the garden was opened to visitors. But even after the official opening of “Spirited Garden” his company was on the verge of bankruptcy. Especially difficult was the time of the financial crisis in 1997, when the garden had to be auctioned for debts to banks. Only fortitude and dedication of the owner overcame all difficulties. Now “Spirited Garden” — one of the world’s most famous bonsai gardens.

READ  Annual Flowers: Growing And Using In The Garden (Part 1) 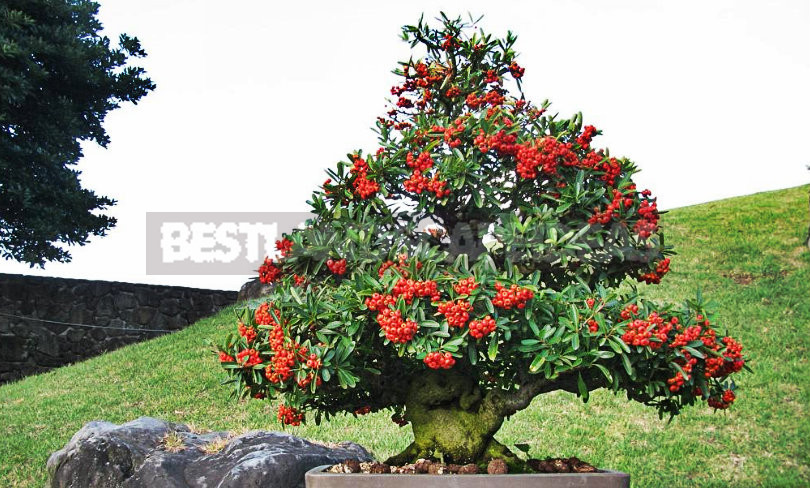 This unique garden is represented by more than 2000 compositions of 100 species of wood, where all bonsai are located outdoors. On the territory of 24 hectares there are five Hiking trails that connect the four thematic parts of the garden: “Main garden”,” Spring garden”,” Garden of the soul” and “Garden of harmony”. “Spring garden” is filled with plants of spring flowering, and the waterfall located here symbolizes the rapid awakening of nature. The stream dissolves in the calm waters of the “Main garden”, in the mirror surface of the ponds which reflect the bridges, picturesque volcanic stones and bonsai planted along the banks. “The garden of the soul” is a place for meditation with a green lawn in the center. Along the perimeter of the lawn for contemplation are unique boulders created by the forces of nature of the island. 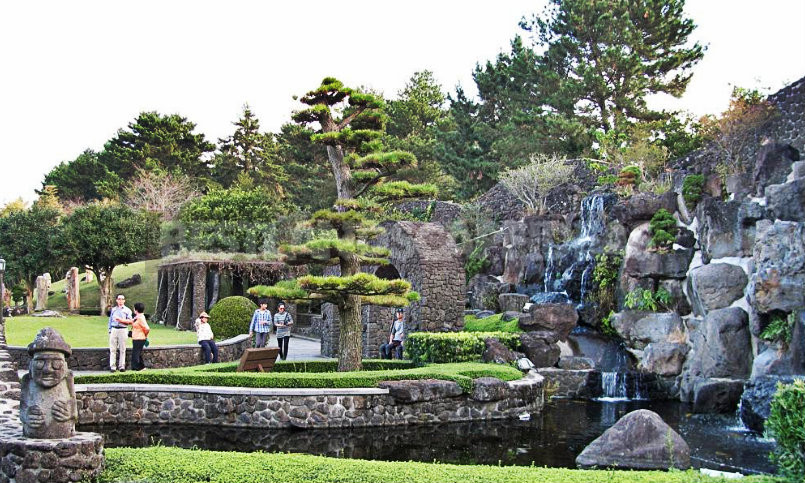 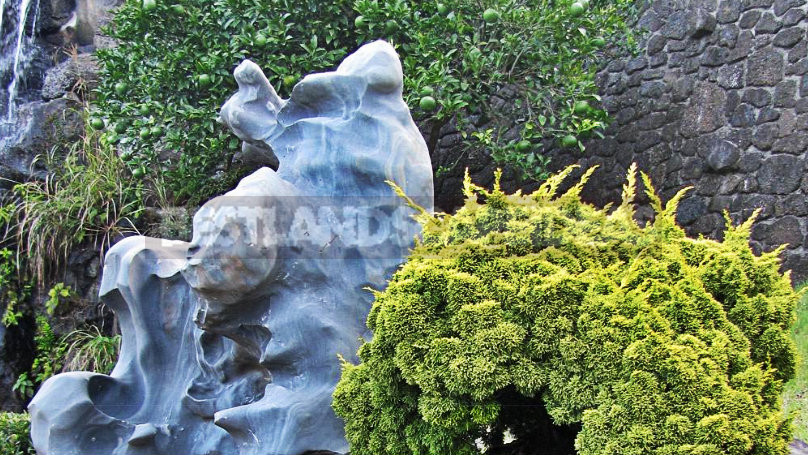 It should be noted that the Creator of “Spirited Garden” was inspired by the unique volcanic landscapes of Jeju island. They are recreated in the picturesque artificial hills, symbolizing the relief of the island; in the water element, enclosed in waterfalls, ponds and lakes; in winding basalt alleys and grottoes; in the rich and diverse vegetation. The garden abounds with elements traditional for Eastern gardens — rockeries, stone bridges, Islands of land among the water surface, sacred Koi carp. There are also several national Korean highlights: a stone pyramid associated with the Korean belief that if you want to ask anything from the Sky, you need to lay down a pyramid of stones, making a wish at the same time; the keepers of the island of Jeju – Dol Harubang, whose statues are decorated with one of the bridges. 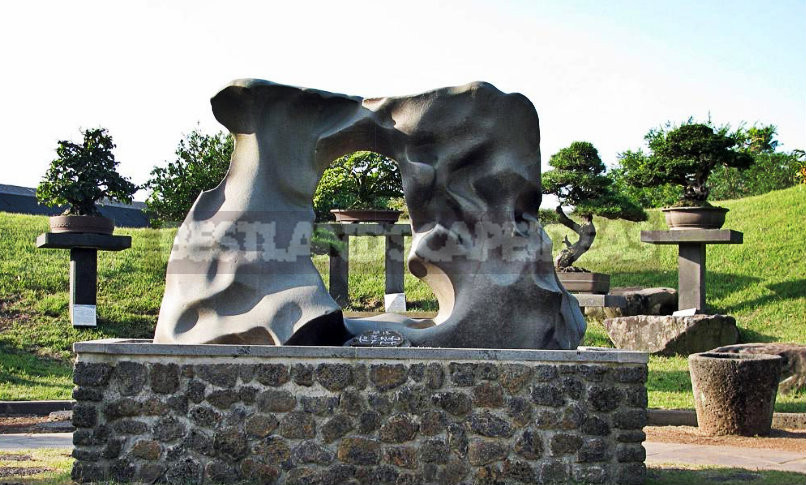 A very important role in the garden is played by countless, artistic texture stones, playing the role of small sculptural forms and involved in the creation of Suiseki. 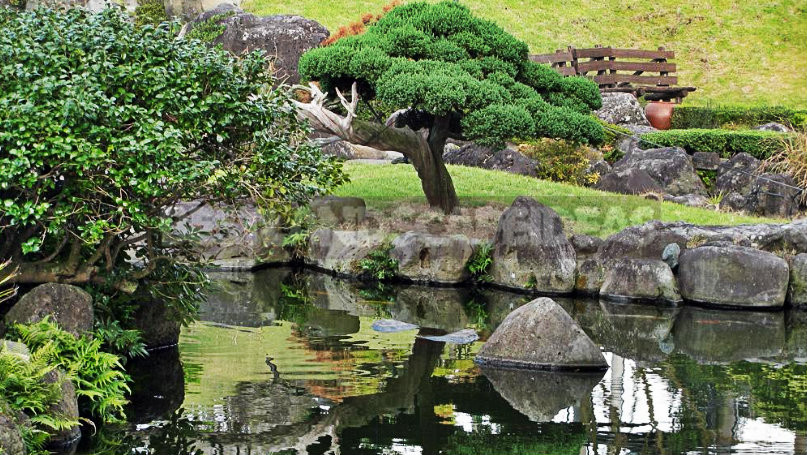 At the beginning of the creation of the garden Bum-Young Sung began to collect non-man-made sculptures made of stone, created by the forces of water and volcanoes: “Stone in the garden is the same party presentation as the tree. Bonsai is the result of the work of two creators – nature and man. On the stone man can not influence, in any case, to interfere in its formation. I can find my own face for the stone by putting it in the right place. When a new stone arrives in the garden, I walk along the paths several times, placing it again and again in my mind in this or that place. In the end, the stone is located next to one of the pedestrian alleys so as to best introduce people to its facade. Sometimes I manage to find the best place for the stone at once, sometimes I have to make a few rounds in the garden until I make a choice. Moving the stones from place to place, I begin to think that nature has made it so that the tree and the stone complement each other. Harmony with the environment is very important, but both wood and stone look much more beautiful when they are in the right place with the right partner. Now I understand that the mission of this garden is to find the right face for wood and stone and connect them in partnership and in harmony with the surrounding landscape. It is equally important for a person to find the “face” of his soul during his life. And it is not good to look for excuses, for example, that you are too busy.”

The ability to maintain a delicate balance between a self-sufficient landscape and the opportunity to adequately demonstrate the collection of bonsai and suiseki, gives Mr. Sung an extremely talented landscape designer. The combination of natural and man-made landscape with traditional Korean bonsai trees in many forms of demonstration, and the special role assigned to the stone, contributed to the emergence of a special type of garden. Bonsai collections are presented in the garden in different ways: some are included in landscape compositions and grow in the open ground, most are collected in the “gallery” along the paths or specially designated exhibition grounds, where “exhibits” are shown on stone pedestals, also on pedestals exhibited and solo bonsai. It is interesting to study how Bum-Young Sung found his own place for each plant, suitable only for him. One of the main secrets of the designer – a competent choice of background. In the first place, it is desirable that the background was neutral and the most suitable for the contemplation of a certain plant. It can be a green lawn, stone walls, sky, water, and for the perception of some bonsai important their reflection in the water. Neutral-gray pedestals for pots are installed in such a way that the so-called “line of sight” of the viewer and the contour line of the composition are inside the same species picture. Also, for the convenience of viewing, the Central sites serve as panoramic viewpoints from which the compositions are viewed most prominently against the background of artificially created green hills. 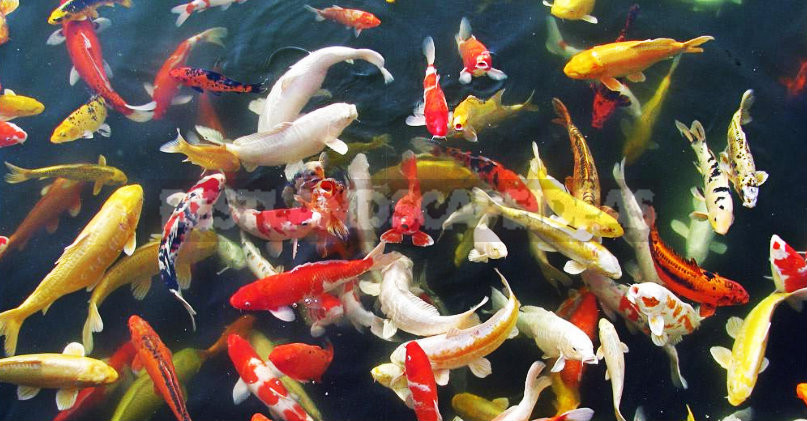 Bum-Young Sung notes: “Bonsai is a “living art” that uses wood as a material, created by man with love and according to the commandments of nature. Bonsai – is the “art of time”, which changes the appearance of their creations every season and requires a lot of time to achieve results. Bonsai is an “individual art” that makes the soul of a person who grows bonsai and a person who admires bonsai beautiful. Bonsai – is “the art of life, created through the unity of man and nature. Therefore, a person who is going to admire the bonsai, should be able to empty his soul, read the soul of the one who grew the bonsai and the soul of the tree with curved branches of time.“ 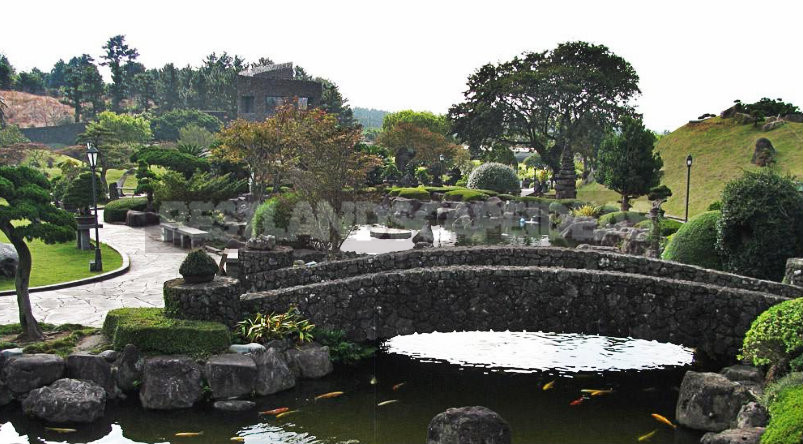 In this garden you definitely feel strong feelings – and this is not only the delight of the perfection of the landscape, not only the amazement of the filigree work that was done when creating real works of art from plants, but also a certain feeling of the atmosphere and the mystery of this place. To try to understand the art of creating a garden and the mystery can help installed in the garden signs with the secrets of growing bonsai, as well as philosophical observations and sayings of the owner of the garden. They contain a great experience, wisdom of past years, a unique philosophy, where the main theme is the transfer of reasoning about trees, stones and nature to man – his character, the process of education, attitude to nature, to life and to other people.

READ  In the Center of Moscow Opened the Park "Zaryadye"