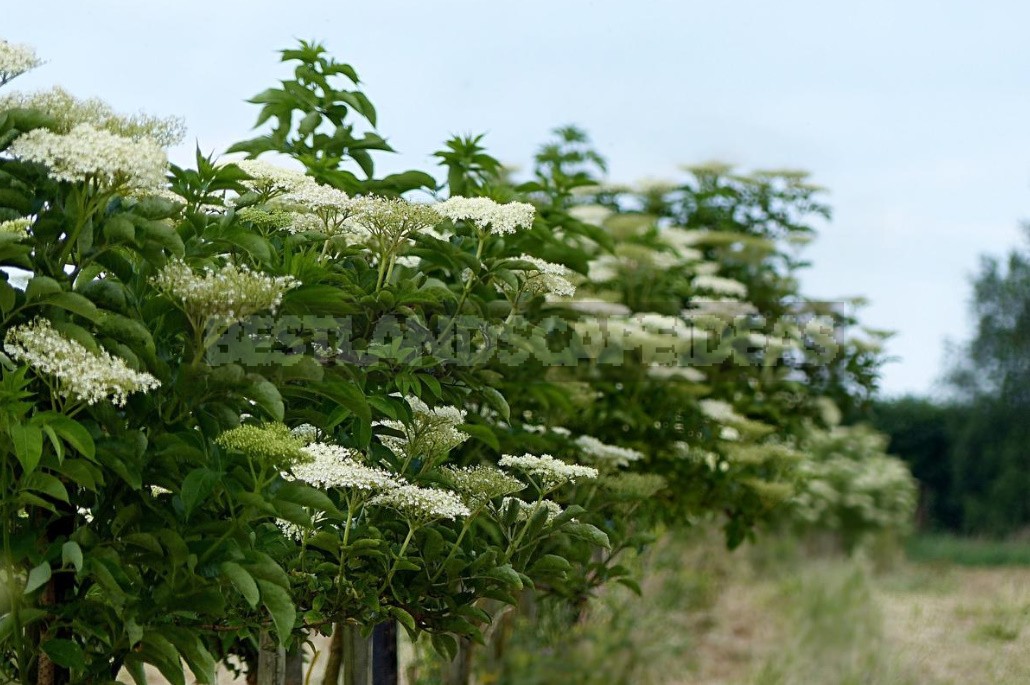 When we say the word “elderberry”, we first imagine an overgrown and slightly neglected village garden. However, this plant-especially now, with the advent of new forms and varieties-has a rather plastic type in terms of style. The main thing is to feel the character of each variety and place it in the appropriate environment of other plants and small architectural forms.

Types and varieties of elderberry

From all the variety (only in the middle zone it is possible to grow more than a dozen species), representatives of this genus want to focus on three species. They are most interesting in terms of use in the design of a small garden, and also have a lot of decorative forms and varieties:

The latter is known to everyone, but the first two are so similar that they are often confused even by experts. The differences are minimal: slightly different inflorescences and fruits-plants, at first glance, almost do not distinguish from each other. Some use the characteristic of the number of leaves in a complex leaf to determine them. It is believed that Sambucus canadensis has 7 of them, and Sambucus nigra has 5. This is true in most cases, but it is still not an absolute rule. 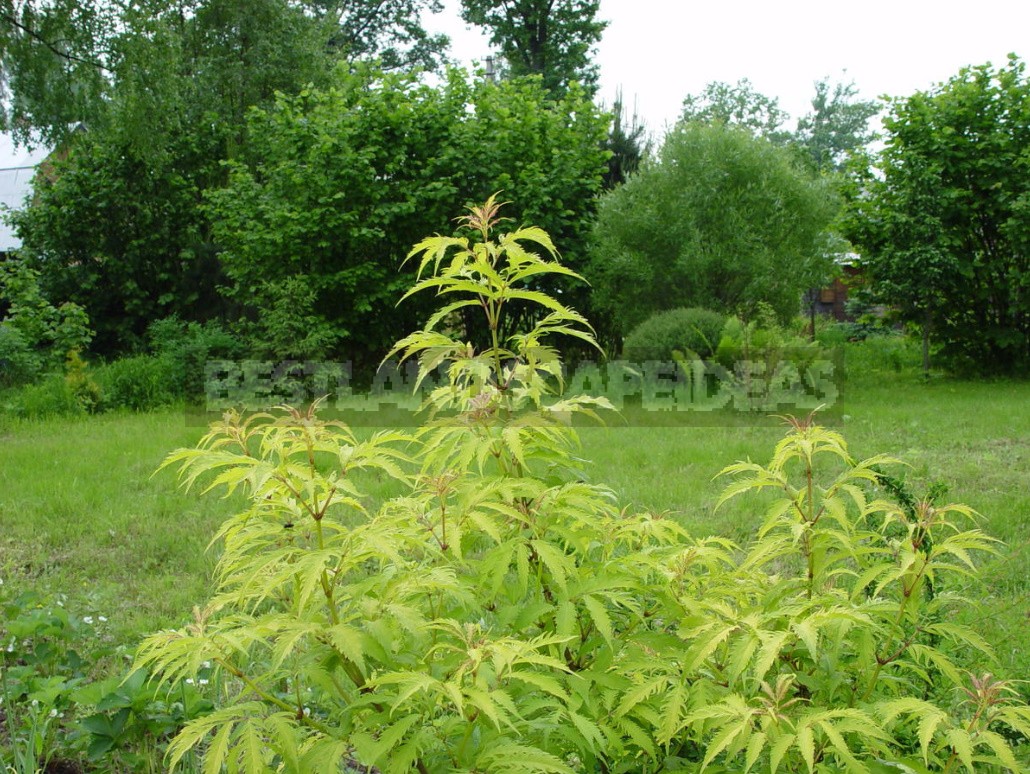 What really sets them apart is their stability in the middle lane. Sambucus canadensis is much more stable than Sambucus nigra, which often freezes hard, although it recovers well. There are good reasons to believe that many collections, including scientific institutions, under the name “Sambucus nigra” cultivated Sambucus canadensis. Hence, apparently, the information in the literature about its good winter hardiness.

Well, now I would like to focus on the decorative forms and varieties belonging to these three types. There are so many of them that even those of you who have hitherto treated elderberry as a garbage plant will certainly find something for yourself in the list.

Prefers fresh, moist, fertile soil. It develops well on acidic loams with close standing of ground water. Gives root offspring. Grow faster. Shade-tolerant, but in the shade of forms and varieties with unusual colors lose their decorative value. Frost-resistant. Does not tolerate excessive dryness of the air.

Shrub up to 2.5 – 3.0 m tall with leaves that are bright yellow in spring, then turn green and turn yellow again only in autumn.

The variety is similar to the previous one, but interesting, in addition to the leaves, and its unusual for this type of green fruit, as well as spectacular flowering.

This form has double-dissected leaves, due to which the Bush looks very openwork. 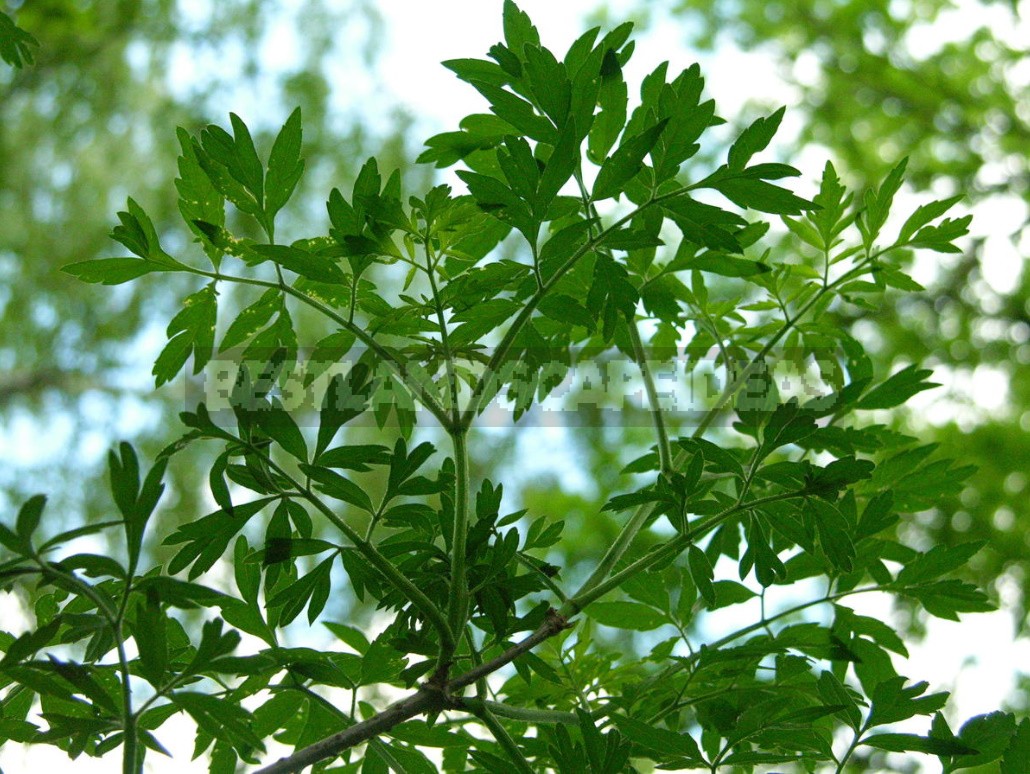 The leaves are covered with silvery spots.

A strong, tall shrub with reddish inflorescences, up to 40 cm in diameter.

It is unpretentious to soils, although it develops better on fertile, loose, lime-rich and wet (but not wet) ones. Leaves are rich in ash substances, so they themselves enrich the soil. Tolerates city conditions well. You can cut it. Honey plant. Shade-tolerant, but develops more luxuriantly in good light.

One of the most spectacular yellow-leaved shrubs, 1.5-2.0 m tall, with beautiful Golden cut foliage. It feels best in a light penumbra. In full shade, the leaves turn green. The Bush is especially good in spring, when Lacy reddish leaves surround dense inflorescences. 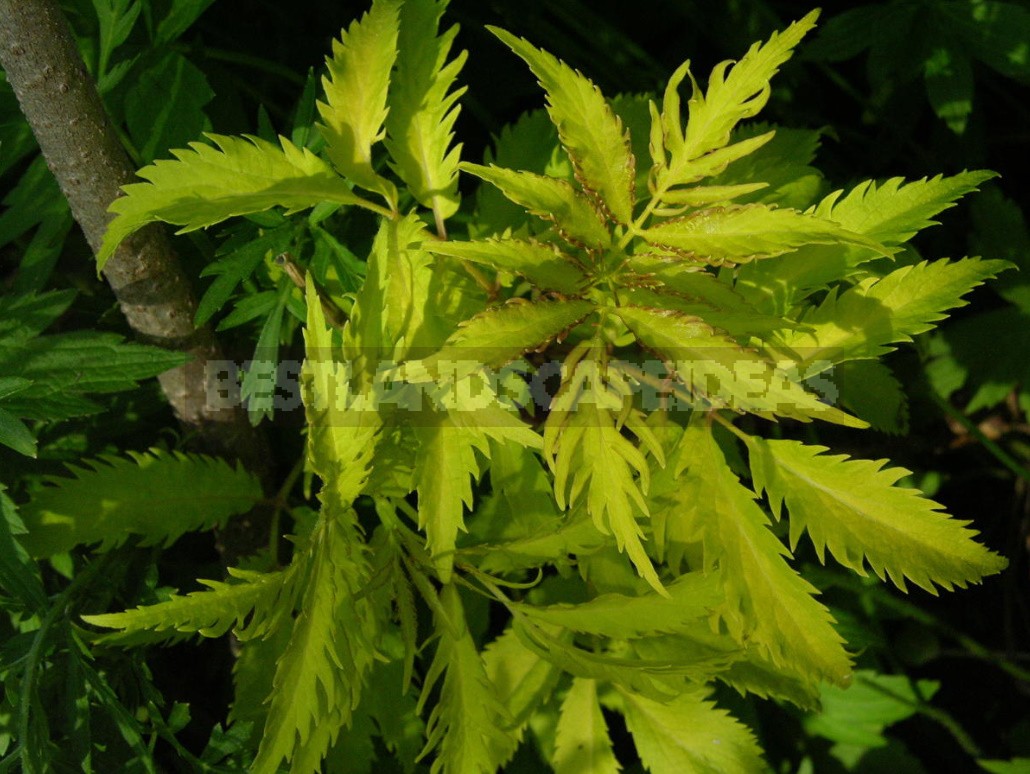 Similar to the previous variety, but more resistant to sunburn, and the leaves are more dissected.

The leaves of this shrub or tree (up to 5 m high) are also deeply and correctly dissected to the main nerve, as in the previous form, but not into such thin segments. When blooming, they are green, turn yellow in autumn.

This form is very beautiful in spring. Purple carved leaves appear on the plant, framing a cluster of dense greenish buds that turn into white with a cream tint of inflorescences. Purple-red berries from mid-July to October stand out brightly on the Bush and give it a special appeal.

Bird-like shape. The first leaves of the shoots, as in ‘Plumosa’, and later appear more elegantly dissected, as in ‘Laciniata’.

Seedling ‘Plumosa Aurea’. The plant is up to 75 cm tall with Golden-yellow deeply dissected leaves that preserve their decorative appearance in the bright sun.

A honey plant that is actively visited by bees. Light-loving, it can also grow in the shade, but forms with unusual leaf color often turn into green bushes in this case. Tolerates dry air. Prefers loose, nutritious, moist soils. Resistant to urban conditions.

A shrub (we have more often grown by the method of growth culture) with leaves of an attractive color (from Golden yellow to lime green), the young growth is colored more richly. The petioles have a pale pinkish tinge. 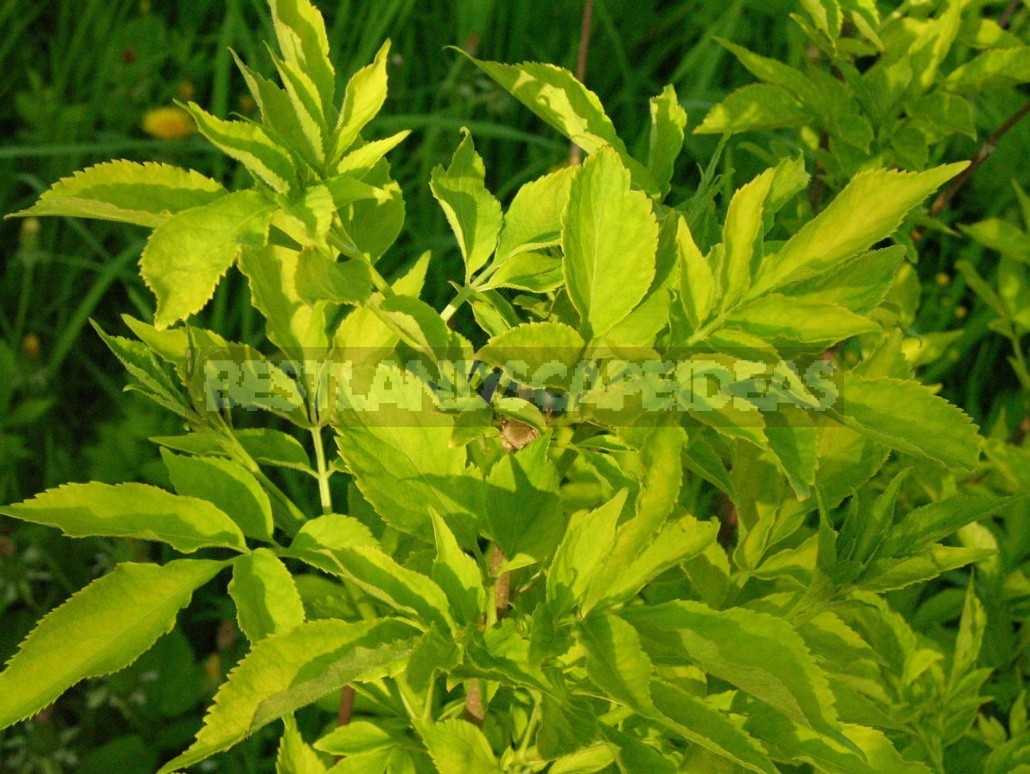 The leaves are strongly split, similar to the fronds of a fern.

READ  Abies and Pseudotsuga: Not To Be Confused With Christmas Trees!

The variety is up to 3 m tall, leaves are stained and splashed with yellow, flowers are white, fruits are black. 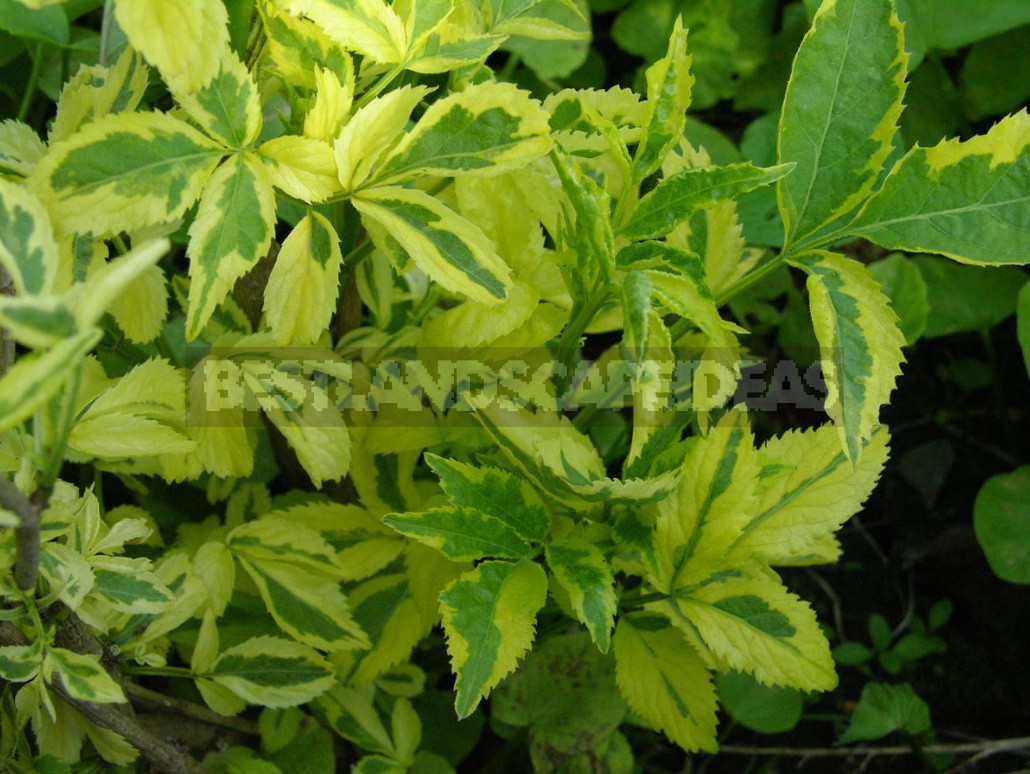 Young leaves have a green color, later become rich black and purple, and in autumn they bloom in red tones. The flowers are also unusual for this species. In the Bud, they are pink, and when opened, they become white and pink. The magnificent combination of flowers and leaves is complemented by purple shoots.

A variety with purple-colored leaves and pinkish flowers.

Shrub up to 3 m tall with very openwork, similar to the fronds of a fern, leaves and white flowers, which then turn into black shiny fruits. Light-loving, in shading the Bush becomes loose, less blooms. 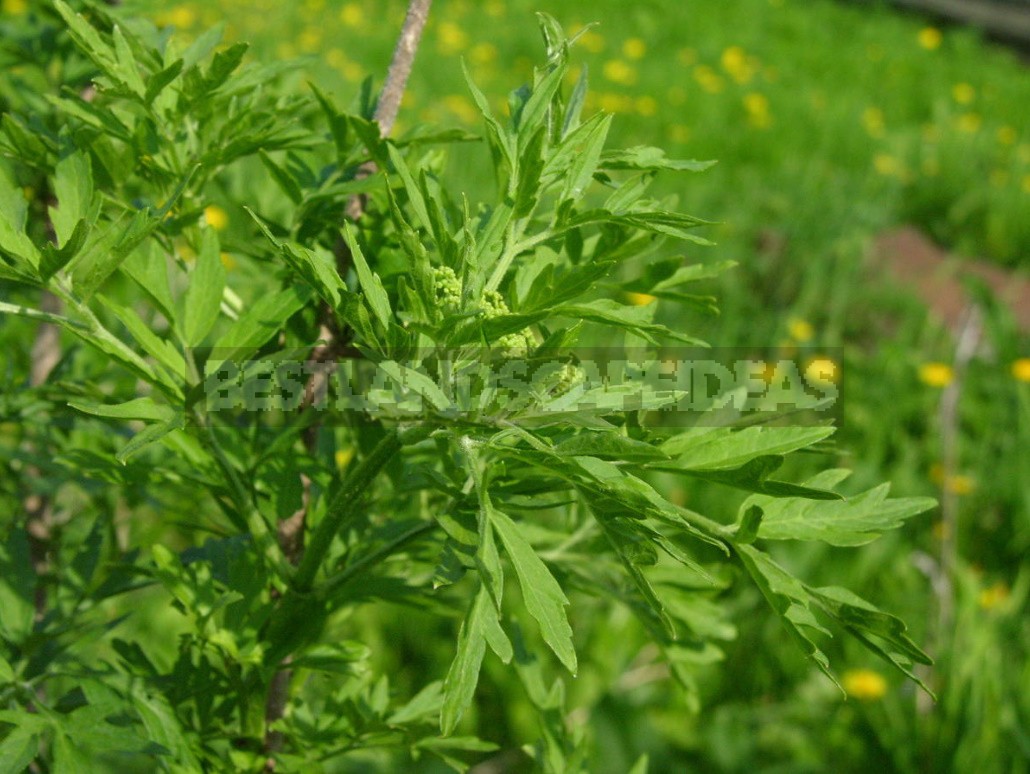 Shoots prostrate or weeping, if grafted on a typical form of strain.

Leaves are bronze with a metallic luster, flowers in buds are pale pink, stamens are pink.

Semi-evergreen non-flowering dwarf (up to 45 cm tall) with a pillow-shaped crown.