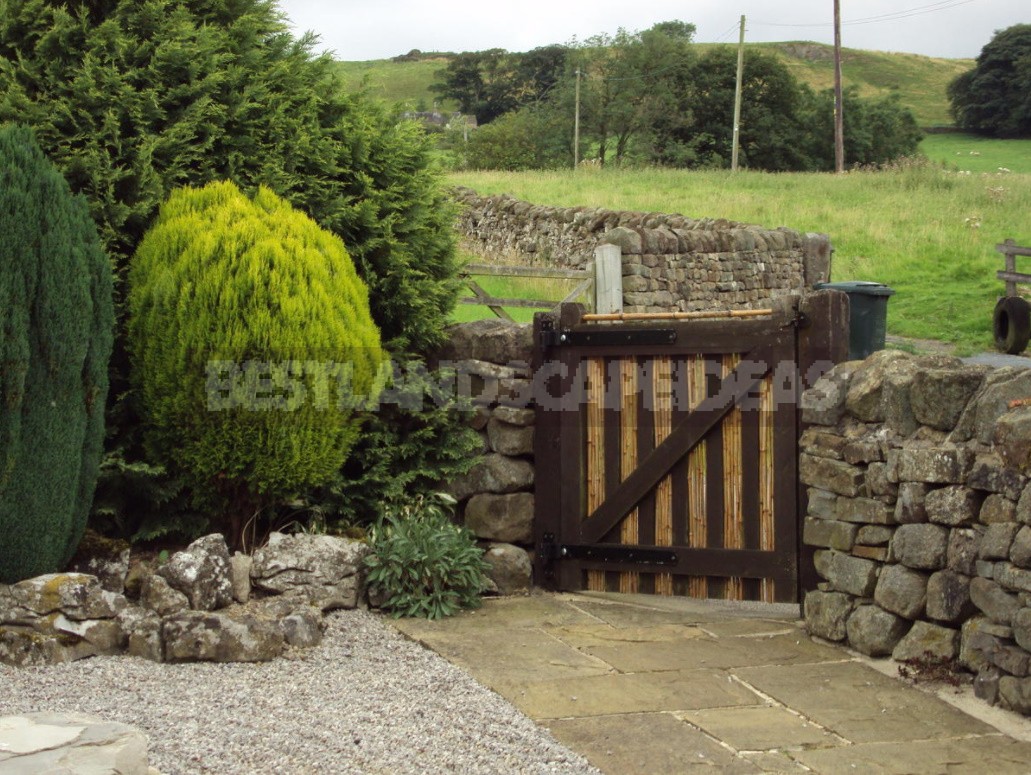 We met Travor and Marian Nash almost by accident – the directory reported the presence of a Japanese-style garden on the route of our family trip through Yorkshire. Interesting?! That’s what we chose.

We found ourselves in a Japanese fairy tale created in the English way by hardworking, talented and very kind people. Travor Nash, a geography teacher and experienced horticulturist, in retirement realized his interest in Japanese culture, completely changing the appearance of his former traditional English garden with an abundance of roses and lush mixborders. He made it strict, concise and easier to care for.What an effort it all cost! 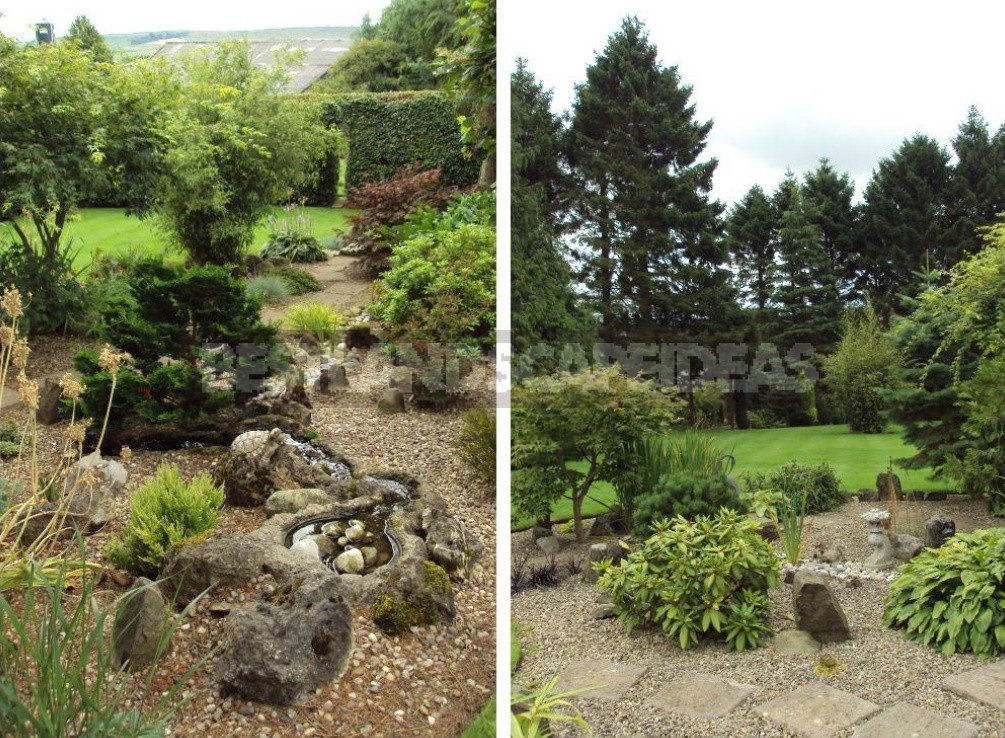 “What do you know about the Japanese garden?” – with this question, Travor began the tour. He took our confusion with pleasure as an opportunity to enlighten us thoroughly, “from scratch”. First of all, it should be remembered that a real Japanese garden can only be made in Japan and only by Japanese hands. Travor tried to use the basic principles of ancient Japanese art to find his own English version. 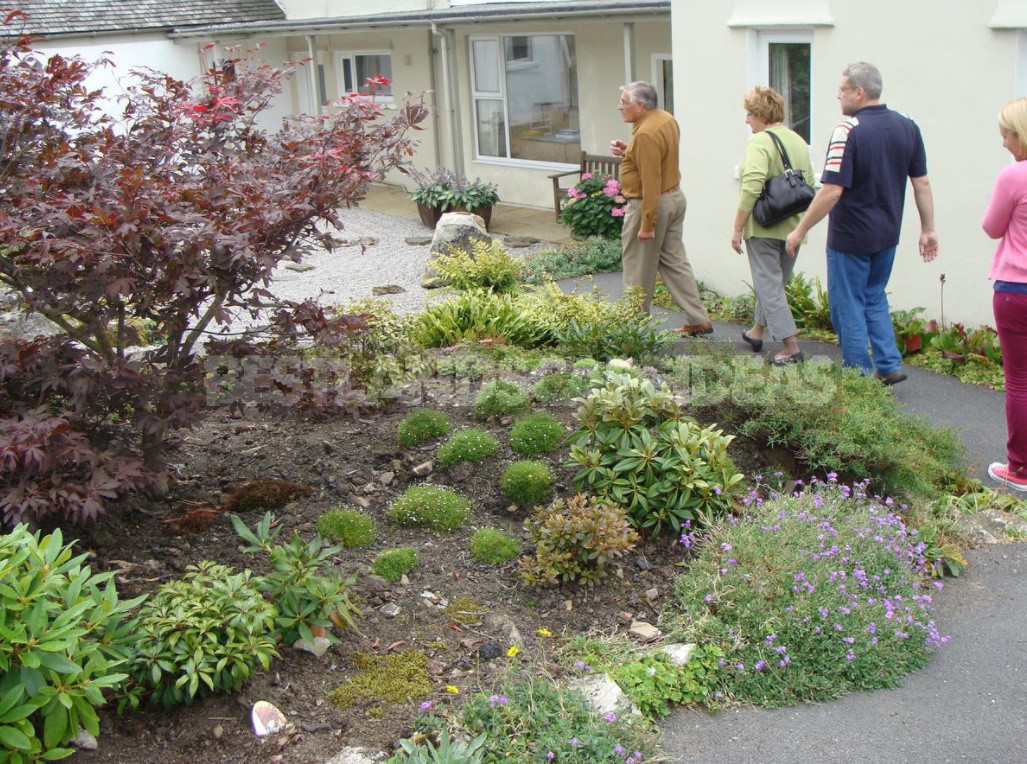 The main idea of the Japanese garden is to create a miniature copy of the surrounding landscapes and nature in harmony with the four elements (stone, water, plants and man). Any composition contains the first three elements waiting for a person. In Travor’s garden, stones are identified with the stately hills of the famous Yorkshire dales, and water (or the symbolic sand and gravel that replace it) with lakes, rivers, and waterfalls. The trees and shrubs of Yorkshire are also transferred in miniature to the Japanese Travor garden. 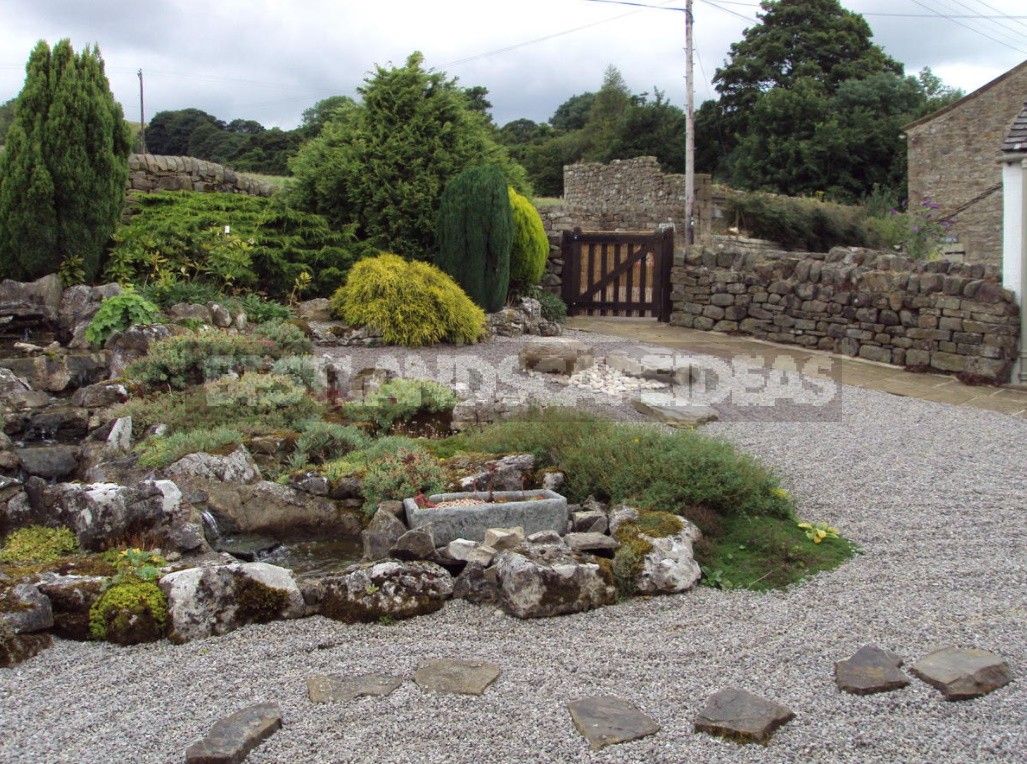 According to Japanese tradition, the garden consists of four parts that open gradually. The viewer should not be able to see other parts of the garden, except where it is located at the moment.

The first part is a rock garden with a dragon floating on pebbly waves, in an open Sunny space in front of the entrance to the house. 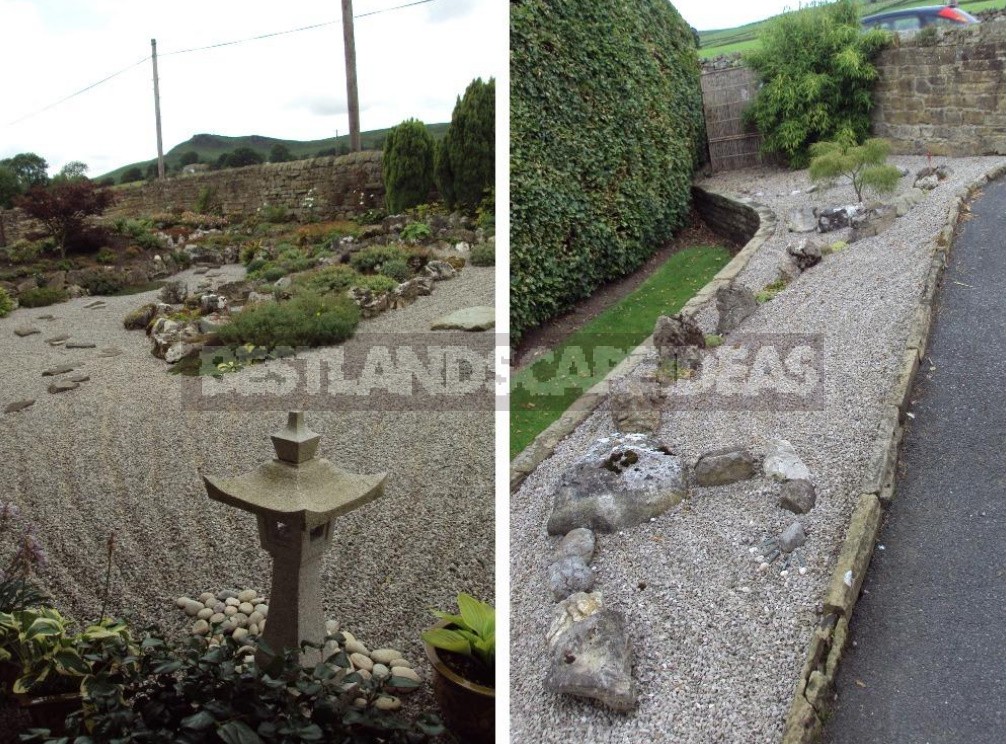 The second part is located in a private area at the back of the house and adjoins the back terrace that opens onto the garden. This is a place for home recreation, family gatherings and reception. Adjacent to the terrace is an English lawn with elegant compositions of gravel, creeping conifers, flowers, irises and chrysanthemums. 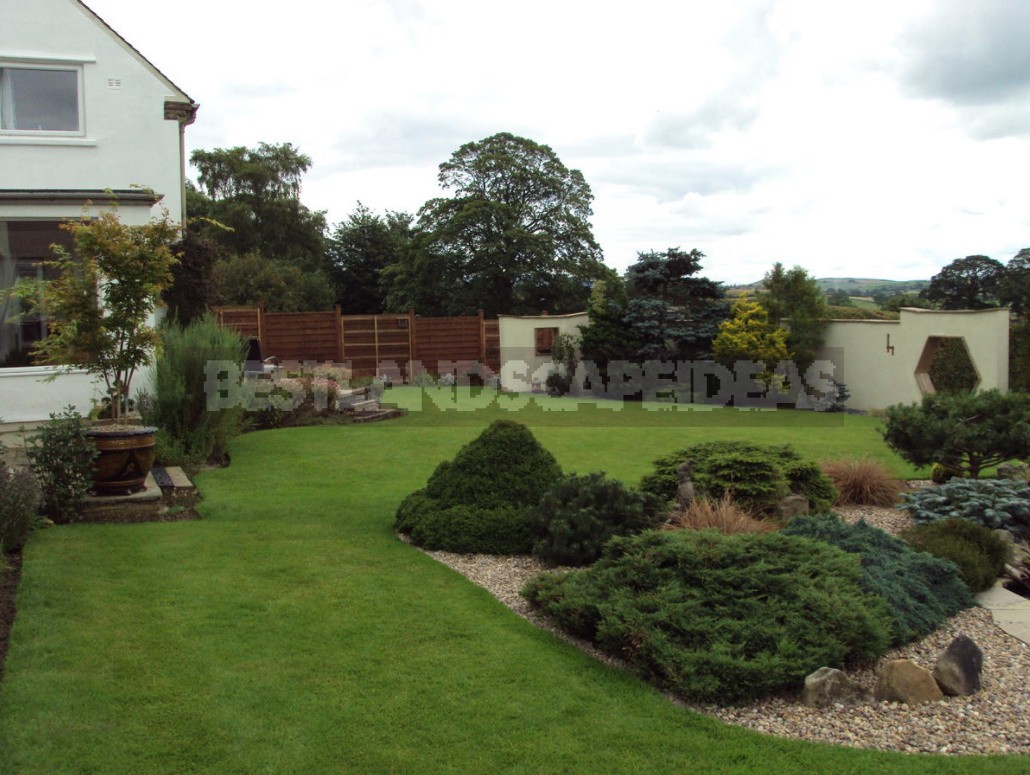 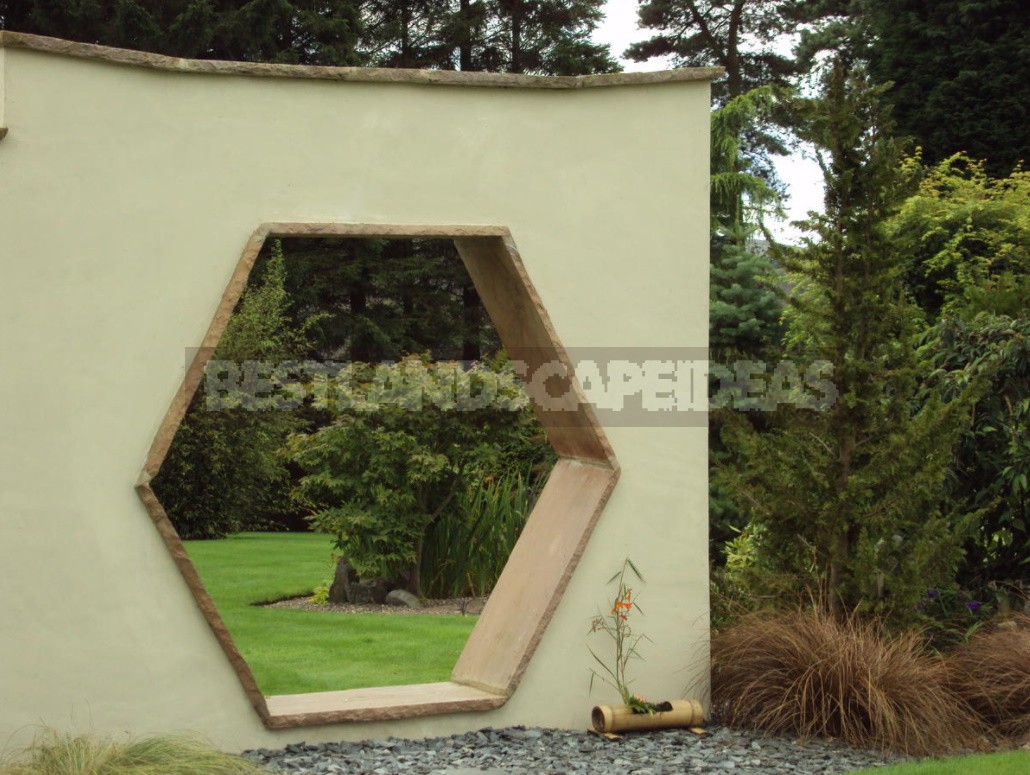 The main “character” of the third part is a bamboo gazebo, ordered by the owners in Japan and personally assembled by them on the spot. Here the open space “plays”: the expanse of the lawn is emphasized by several freely located cedars and thuja trees. There are great views from here. 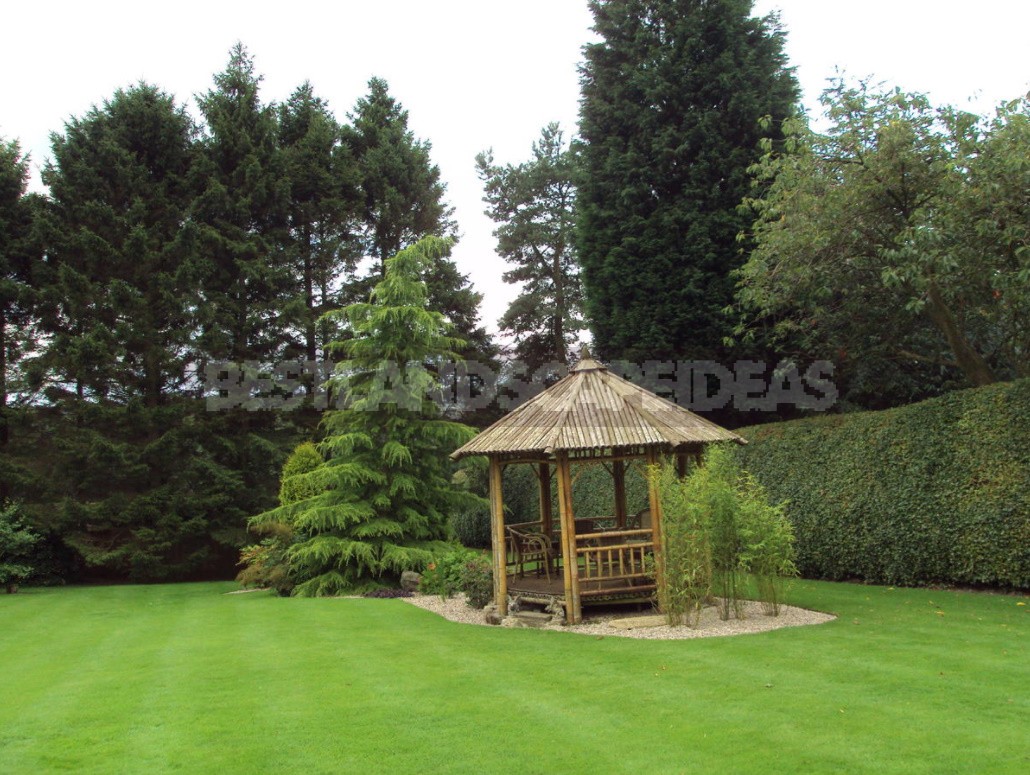 Another idea of the Japanese garden is the “shakai” technique. This is the ability to fit neighboring landscapes, landscapes, or just beautiful trees of neighbors into the drawing of your garden (what we call “landscape on loan”). Shakai creates a stunning effect: the participants of the composition are again the hills, initially hidden by the outline of the house. Their emerald grass tops, illuminated by pink and lilac Heather, seem to draw the very sky to the garden. The boundaries are blurred, the gaze glides into the distance, the space of the garden is poured into infinity! 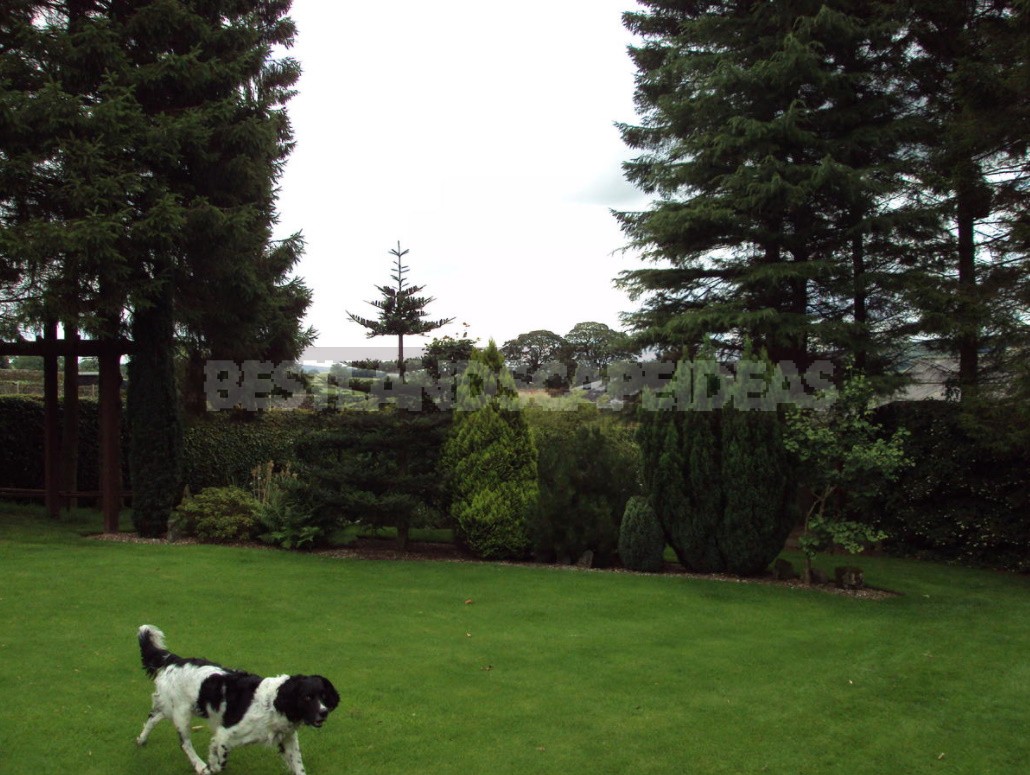 Through a rectangular pergola we get to the fourth, “forest” part of the garden. In the shade of tall coniferous trees, the scenery of an old Japanese ritual is hidden: a tiny tea house with a round window and a hard bench-canopy “for visitors”. 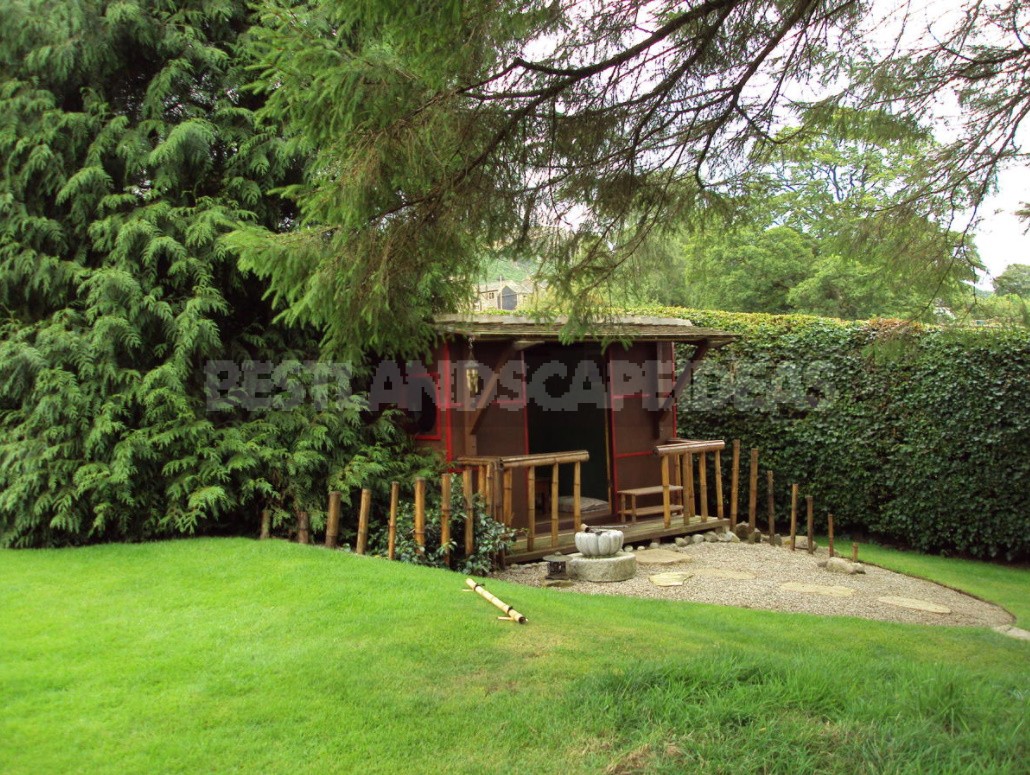 They are located quite far from each other, and they are United by a shady garden with streams bordered by mosses, ferns, shade-loving perennials, hosts and hydrangeas. 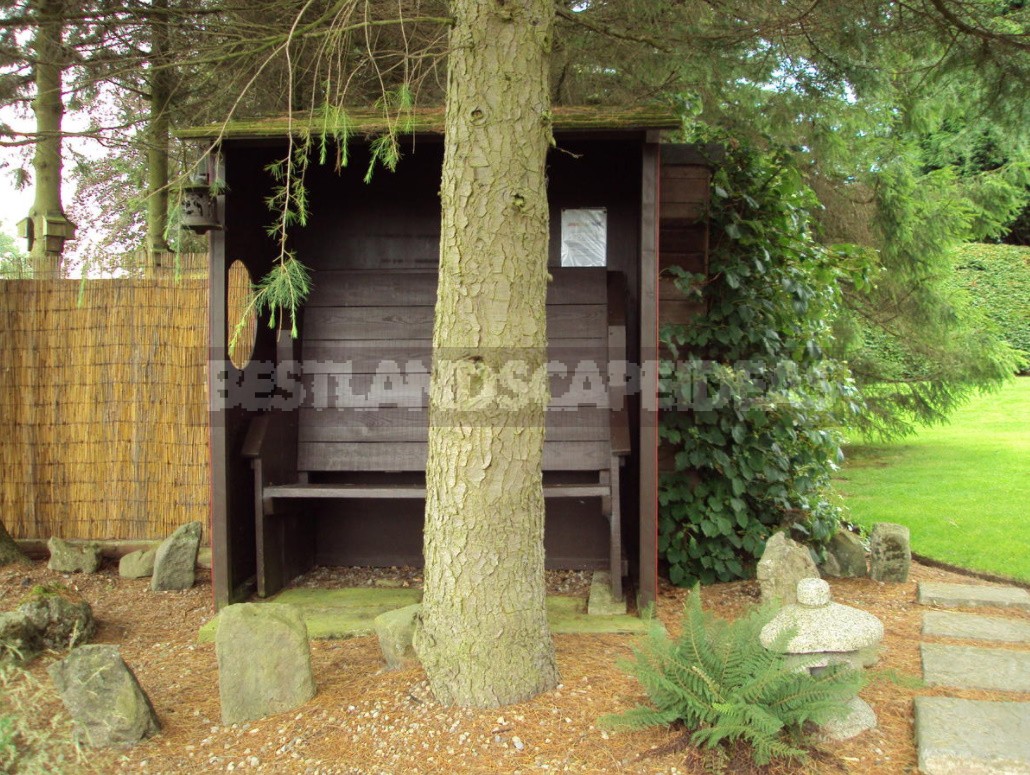 Travor told us that Japanese officials used such a clever trick in the old days: a peasant visitor who came with a complaint or request was kept waiting for hours. The coolness of the shady garden, the murmur of water and the song of birds softened the heart of the petitioner, he forgot his request and went away with nothing, but with a peaceful soul. 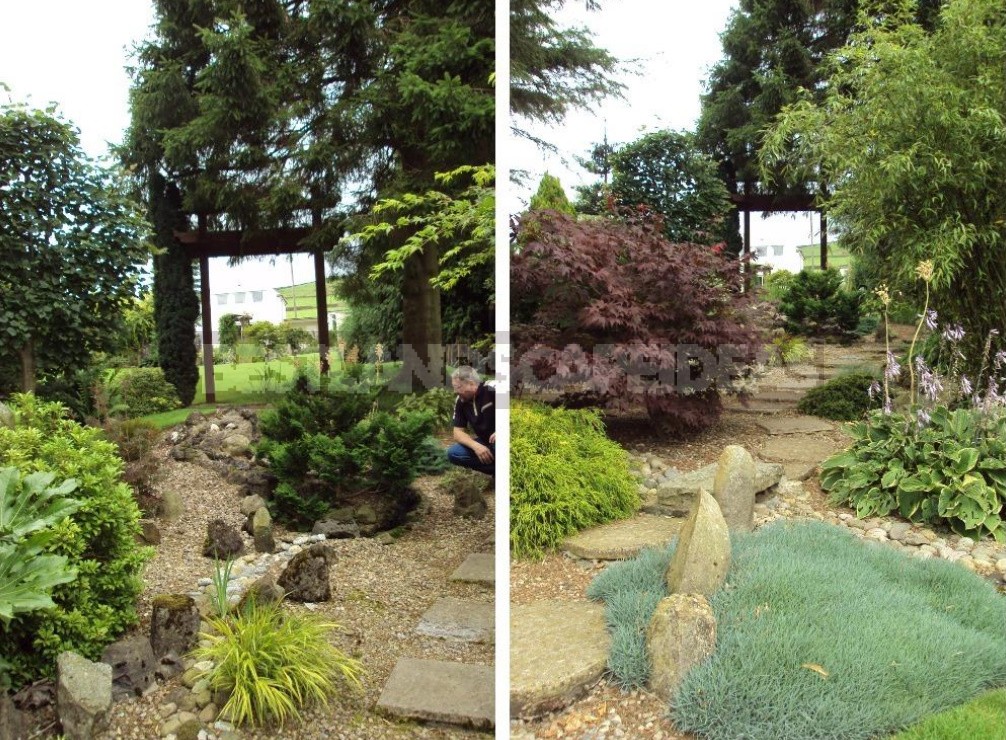 In the “forest thicket” we saw a striking detail: high up on the trunks of fir trees are fixed in a variety of boxes, similar to birdhouses, but with an unusual hole-a gap at the bottom. It turned out that these are houses for wintering bats! What’s wrong? A common house for common English bat, I need somewhere for her to spend the winter, the poor thing. 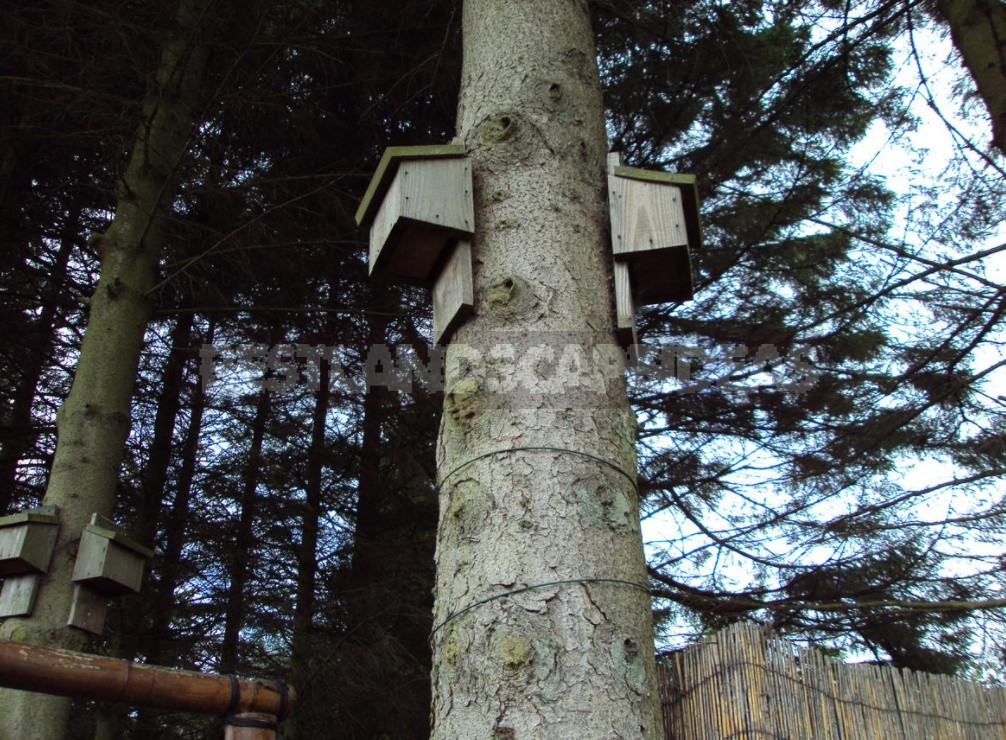 Under the coniferous shade hides a farmyard with a traditional English tool shed, compost boxes and other garden utensils. You can’t immediately guess the purpose of this place – because it is so cleverly disguised with bamboo mats and covered with shoots of Hydrangea petiolaris.

No English gardener will let go without a Cup of tea a person who has come to admire his garden! Over tea, I gather impressions together, think about the nature of the garden: “What is he like?» 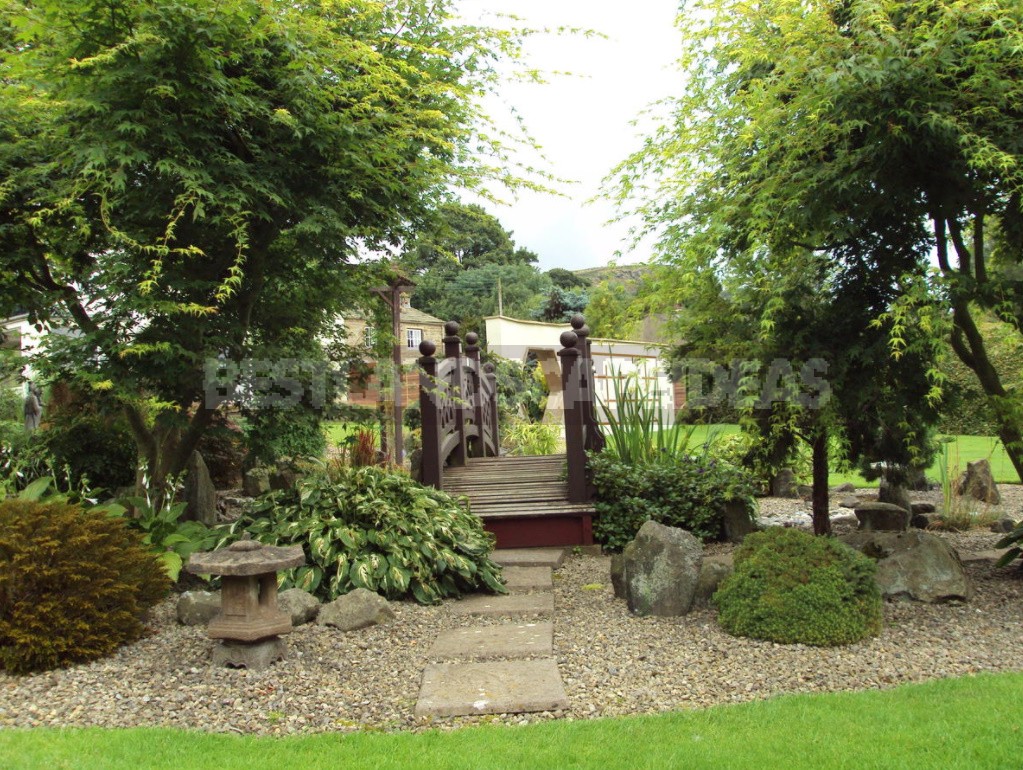 English, of course! It has features typical of an English garden. This is an expressive elegant front garden (but with a dragon!). This is also a family recreation area with spacious lawns where small children and dogs can play and run around (Travor and Marian have three children and five grandchildren). This is also a gazebo (but made of bamboo!), in which the younger generation can retire and keep secret. This is a spacious courtyard… 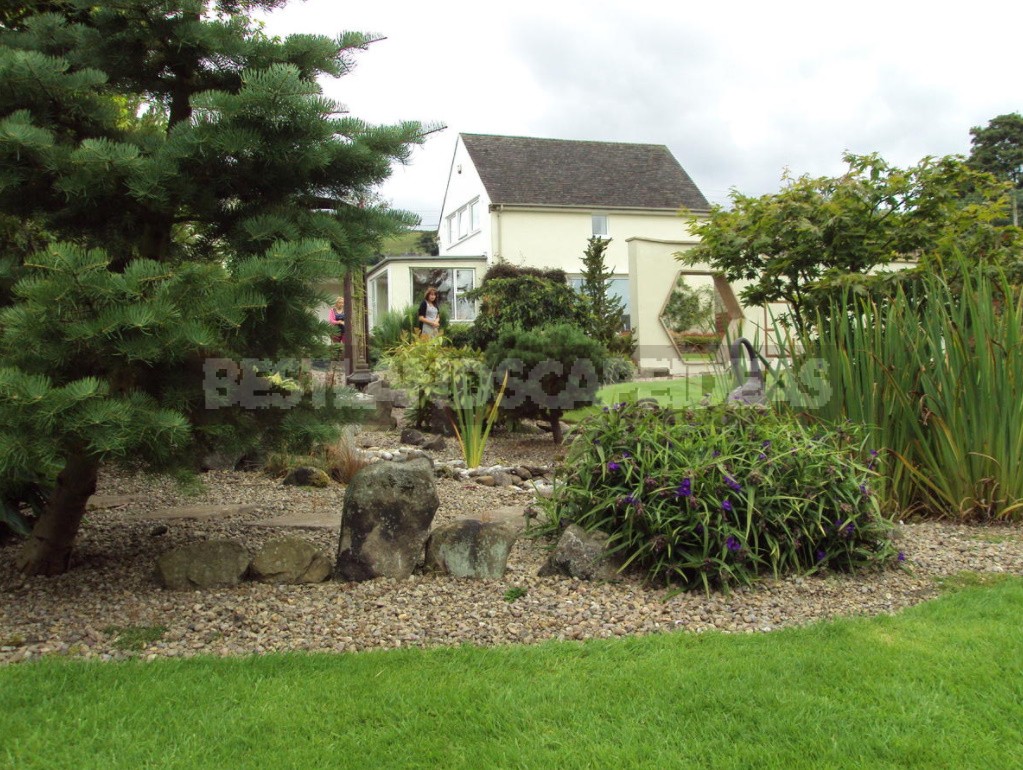 At the same time, the garden is Japanese. There are no bright colors, luxuriantly blooming perennials, mostly iridescences and shades of green, gray, brown and white. Behind this lies the ability of the owners to see the charm of the ordinary and the grace of simplicity. According to Japanese tradition, the garden is filled with bright colors twice a year-in spring, when the trees are blooming, and in autumn, when chrysanthemums and flaming Japanese maples are blooming. 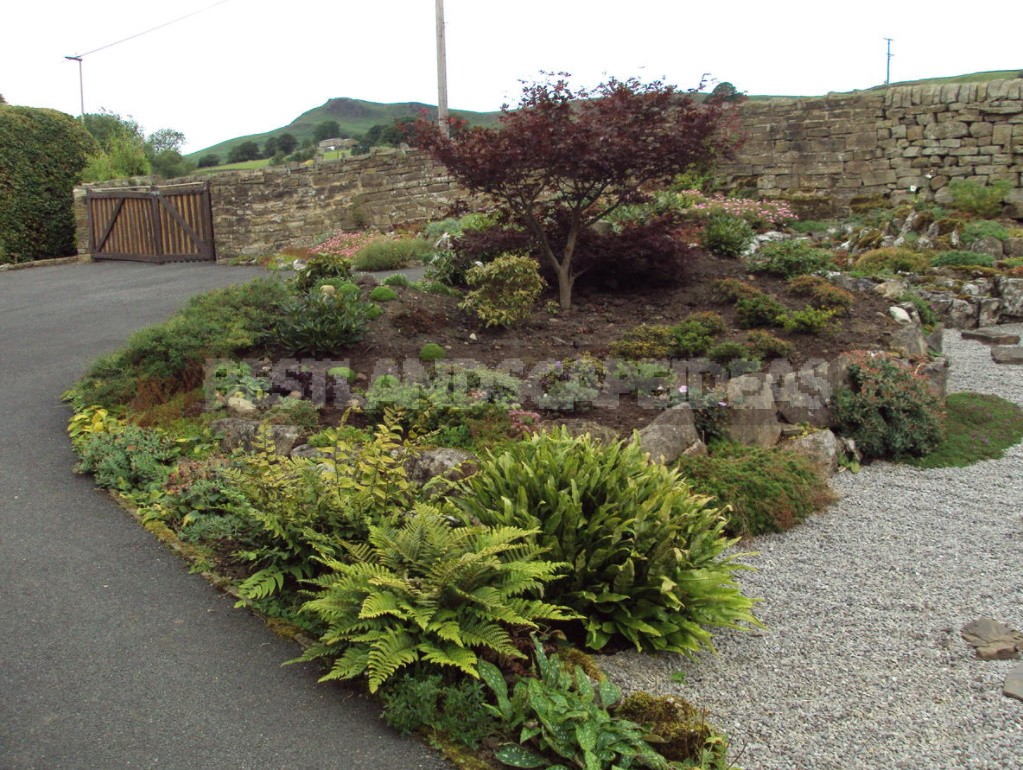 Contemplation of the garden brings joy, while bringing inner peace. It is mysterious and simple, welcoming and full of dignity. In it, you can imagine a noisy group of young people, and a lonely dreamer with a book. A happy dog can run about the lawns barking loudly, but at the same time the garden has the majestic calm of the Yorkshire hills, and mysterious bats sleep quietly in the houses on the fir trees… 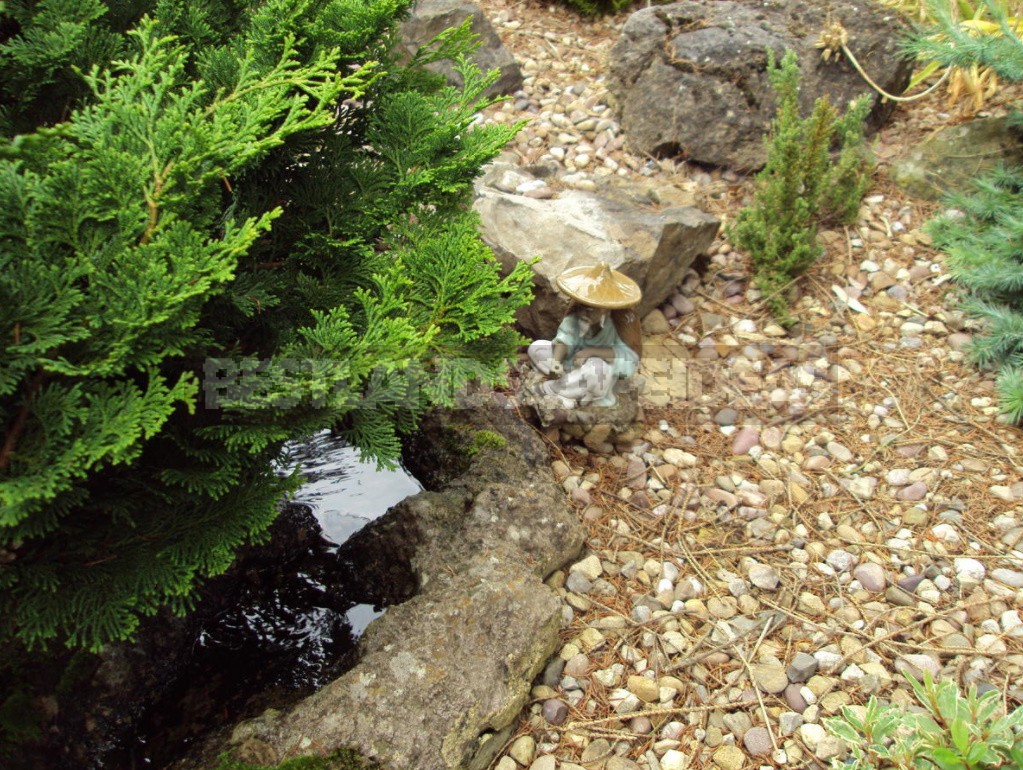 Surprisingly, Trevor and Marian, like all Englishmen, traveled a lot around the world, but they only managed to visit Japan last year. They created their garden “by literature”, trusting their taste and garden sense. They combined the traditional English way of life with the subtle nuances of Japanese culture, and harmoniously exist in this space. 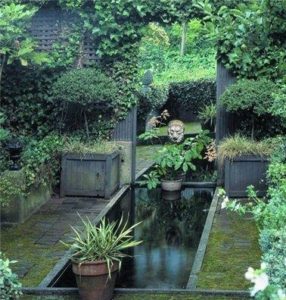 The Mirror in the Garden 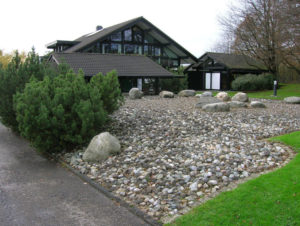 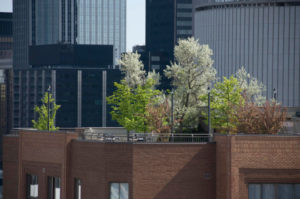 Roof Garden: a New Wave of Landscaping Captures the City 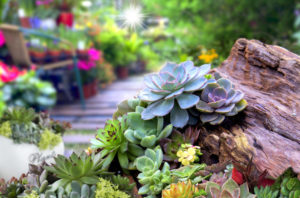