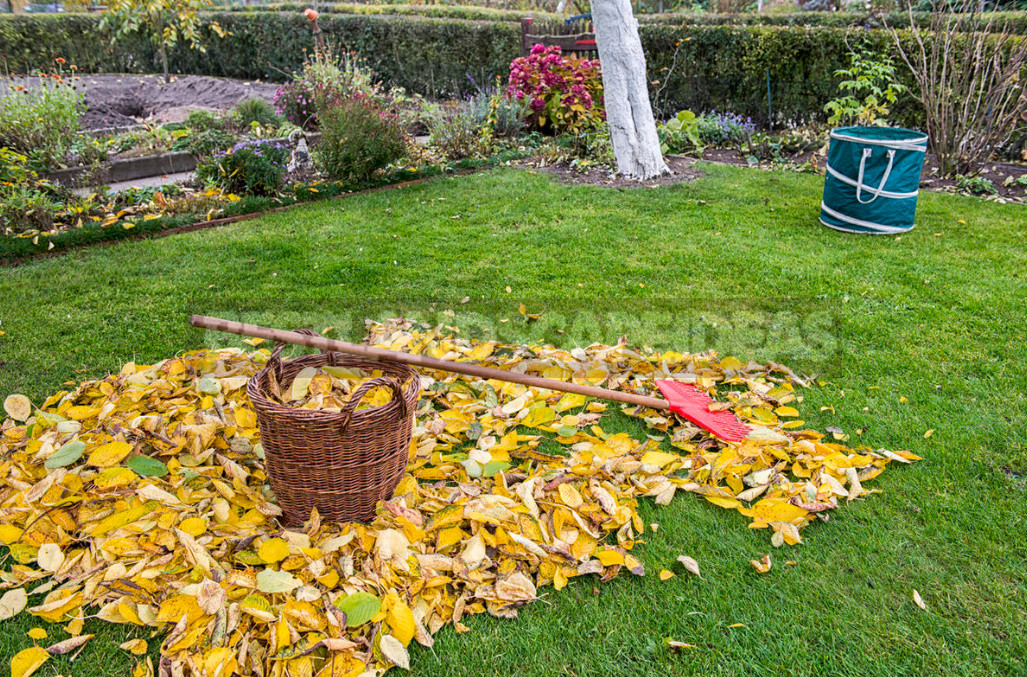 The next summer season comes to an end, and gardeners, having filled the bins with supplies, sigh with relief. But it is too early to rest on our laurels! To preserve the health of the garden and next year to get at least a generous harvest, you need to have time to do a lot of things in the fall. First of all, it is necessary to remove plant residues from the site, which can greatly harm cultural plantations.

Why is the harvest not happy?

In recent years, the theory of organic farming has become increasingly popular. Especially valuable for the adherents of this dacha flow are all kinds of plant residues, which act as the primary material for the restoration of soil fertility. And here comes the problem. Beginners, tempted by the advantages of such an approach and not fully understanding its principles, stop making “harmful” mineral preparations on their beds, replace the shovel with a flat cutter, and in the autumn leave all the plant debris in the garden and in the garden – they say, it will rot, there will be a great benefit. 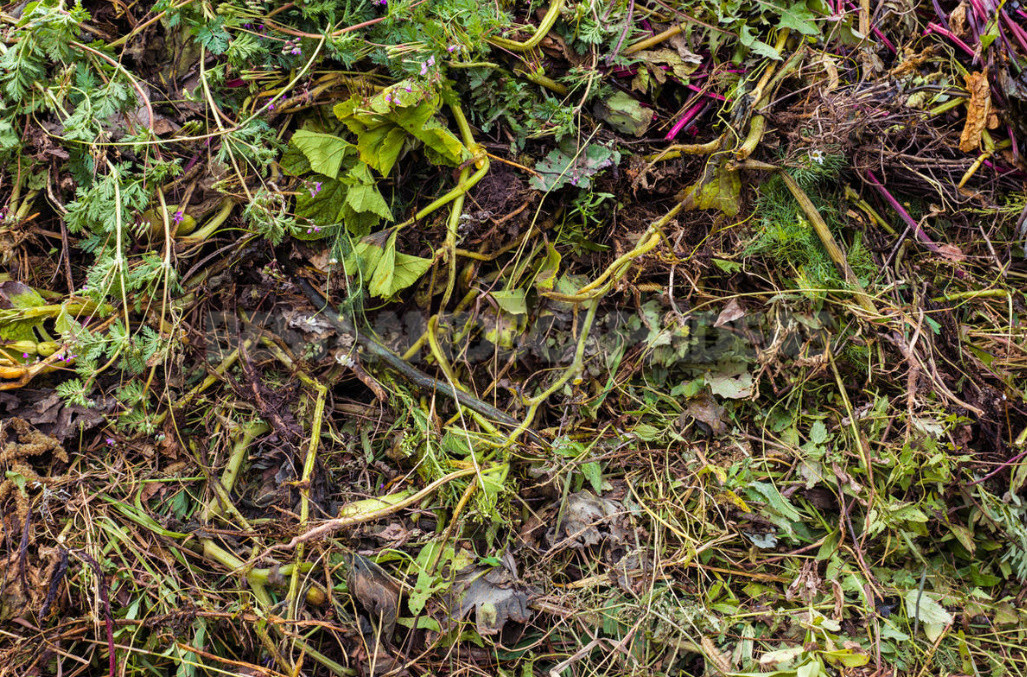 No less a gross mistake is made by “ordinary” summer residents, who by the end of the season are very tired and lazy to remove garbage from the site. They postpone the “guidance of beauty” until spring, and then, plunged into the hot sowing passion, and completely forget about their plans.

Well, if the plant remains ” bursting with health.” But how often does this happen? Laziness and frivolity do not cancel processes of rotting, reproduction of pathogenic microflora and the gusts of wind carrying disputes of this “evil spirits” on all site. Many thanks will be given to numerous pests who will find food and a safe haven in the left garbage. 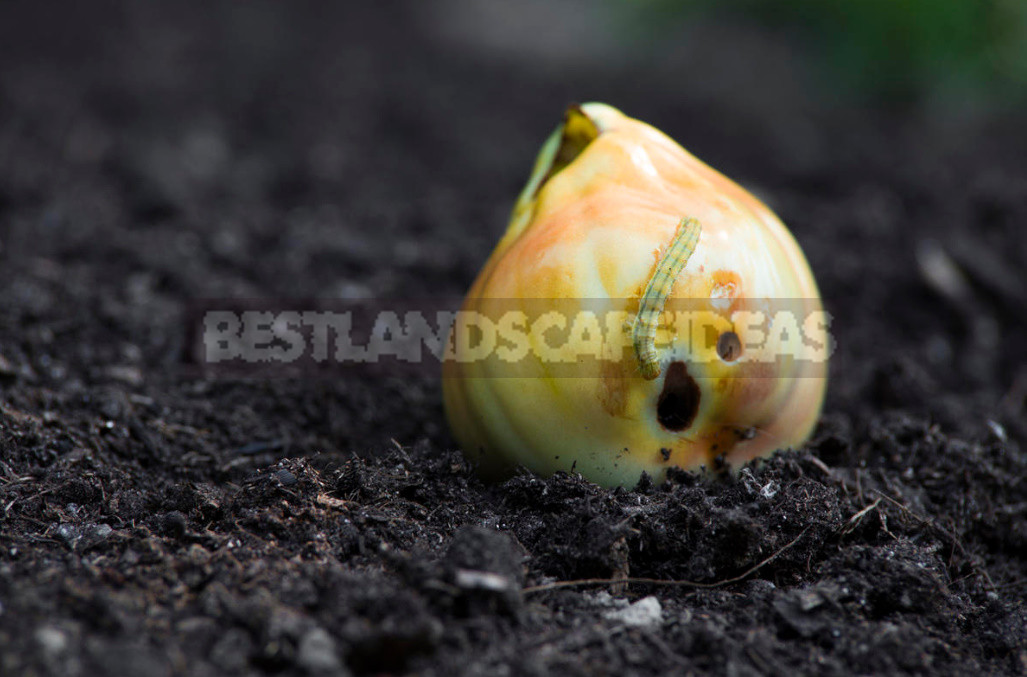 Therefore, to what country current you would not refer yourself, in the autumn you will need to remove from the soil surface everything that is dangerous for the garden. If, of course, you value the future harvest.

Leaving the fallen leaves in the garden, you prepare for pests a secluded place for the winter. Under such a feather bed insects will be warm and cozy, and next spring, having bred in incredible numbers, they will attack the garden plantings with renewed vigor. 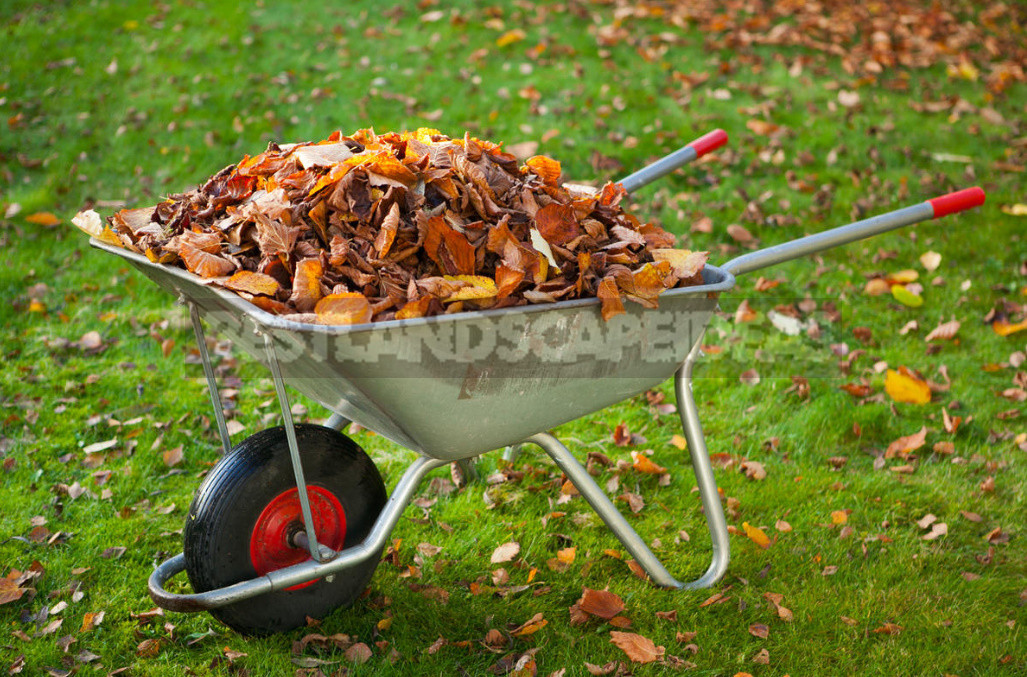 Will add problems deciduous fall from under trees and shrubs, which in the current season have been affected by fungal infections. Such leaves, scattered around the garden, will quickly transfer the spores of the disease to healthy plants.

Under fruit trees during the season there is a carrion-unripe apples, pears, plums, etc. Such fruits fall to the ground for a reason: often they are affected by either infection or pests. Sometimes trees independently normalize the number of ovaries and dump healthy fruits that will not be able to ripen. Any carrion should be immediately removed from the ground, so that it does not become a source of infection is still healthy fruit hanging on the branches. 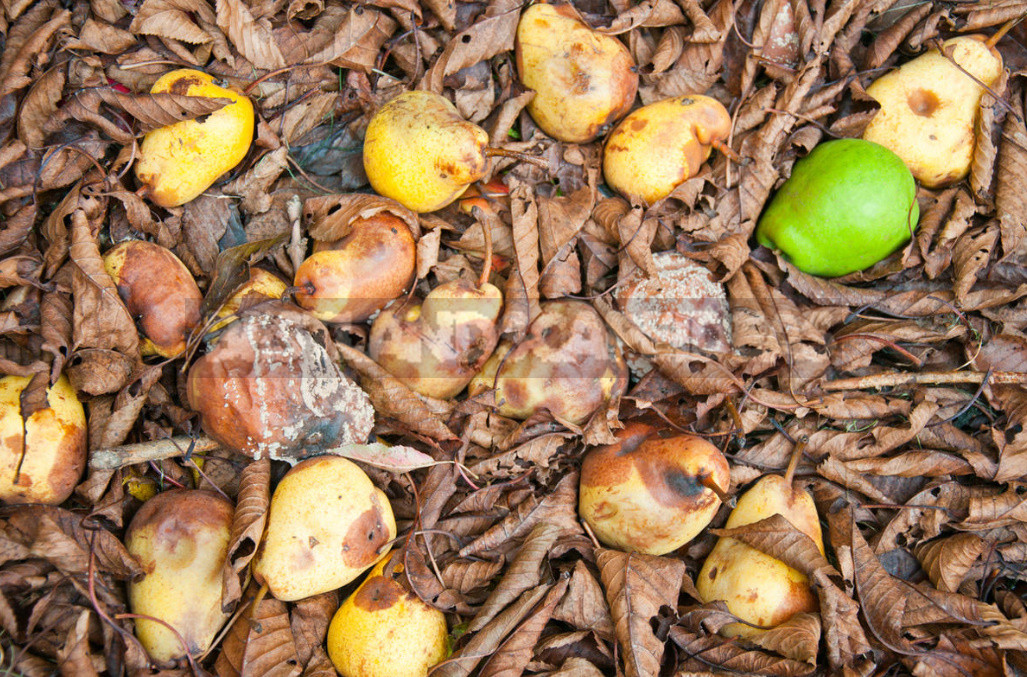 Sometimes rotten fruits remain hanging on the branches, dry up and turn into “mummies”. Such mummified fruits are an even more dangerous source of infection — they deliver the spores of the disease directly to the destination. These hotbeds of diseases must necessarily be removed from the branches, because while they will show off on the tree, it will be problematic to cure it. 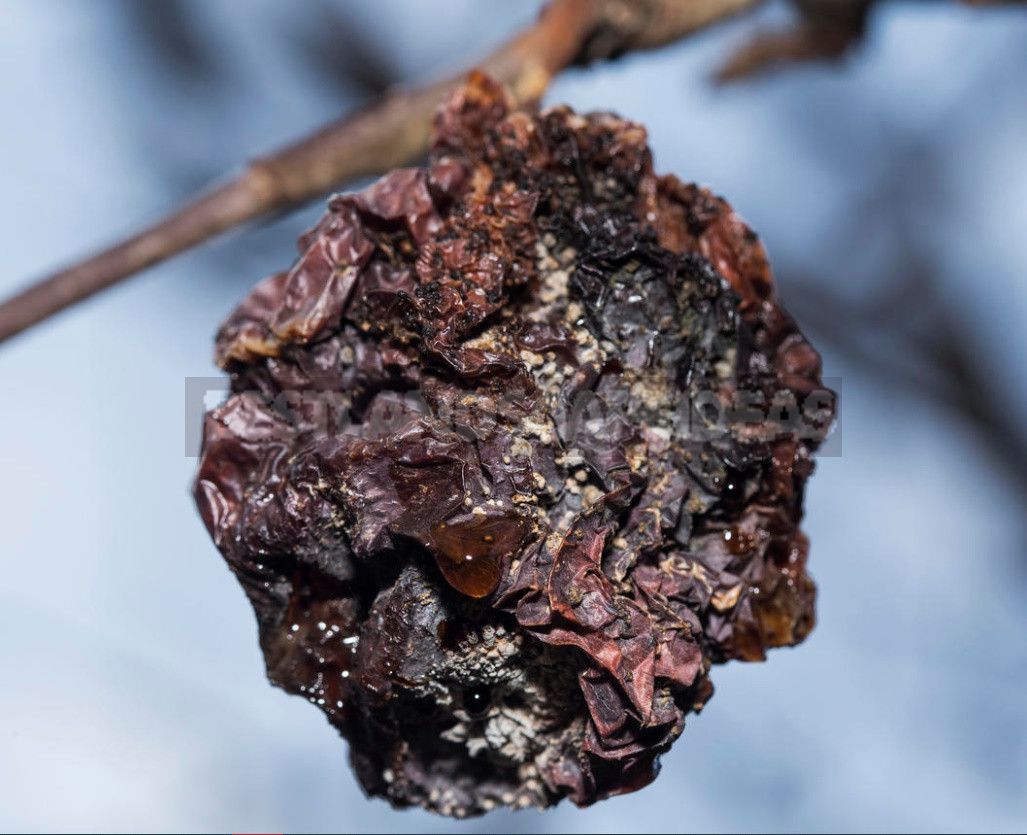 If a formative pruning of healthy trees and shrubs has been carried out, the cut branches can be left on the site and allowed to cook the ashes gradually. But if after sanitary pruning in the garden flaunts a bunch of tree shoots, speckled with lichens and other” symbols ” of fungal infections, it should be disposed of as soon as possible. 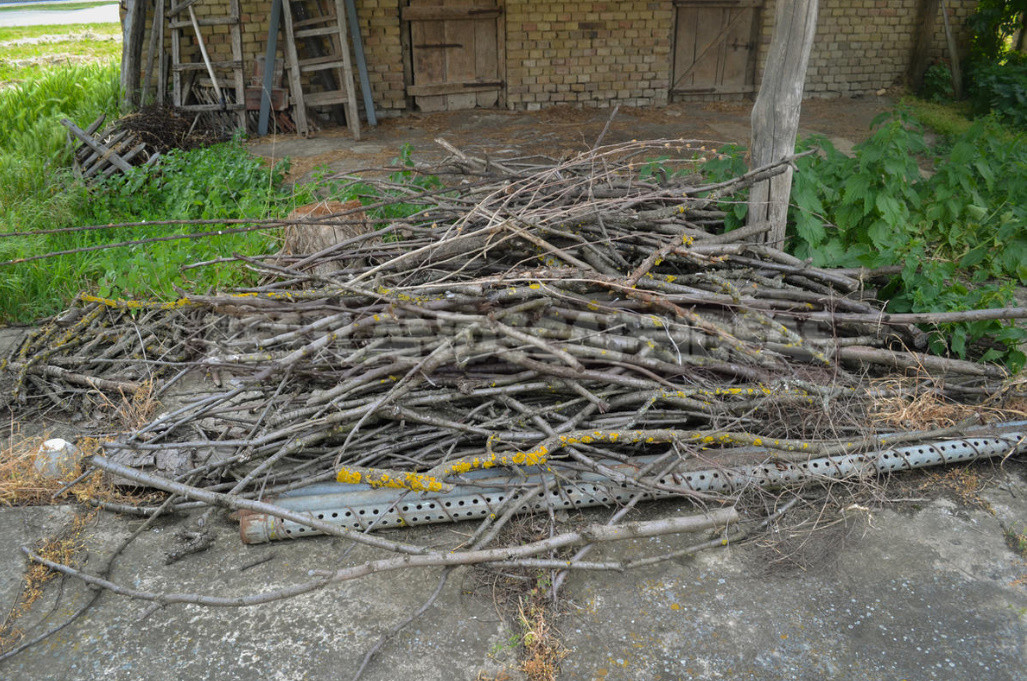 Such wood remains are often chosen by tinder. Their spores are easily carried by the wind and can cause the destruction of healthy trees and wooden buildings located on the site, a new army of mushrooms. These aggressors will quickly lead the trees to destruction and destroy the buildings. Remove from the stump fruit body tinder useless – in its place will quickly grow a new mushroom. Therefore, a more reliable method is to uproot and burn the affected remains of trees. 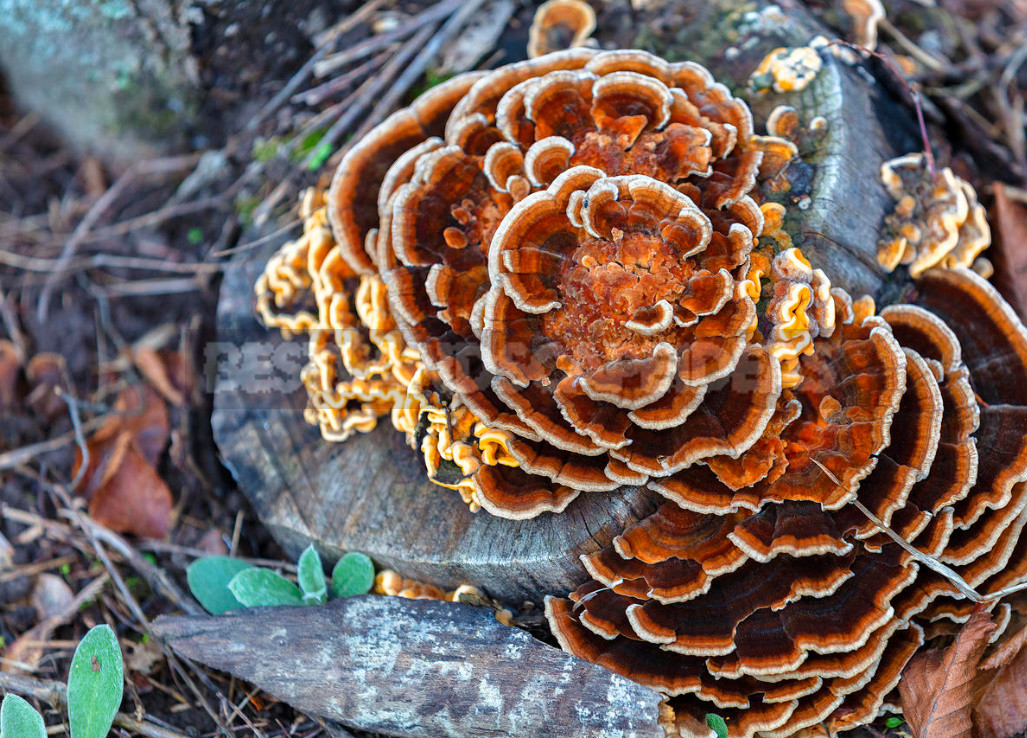 It is not necessary to leave on the surface of the soil vegetable tops, which in large quantities accumulates in the garden after harvest – it will become a cozy refuge for wintering pests. Tops from sick plants need to be removed from the garden especially. To leave contaminated waste in the beds is to ruin the future harvest. 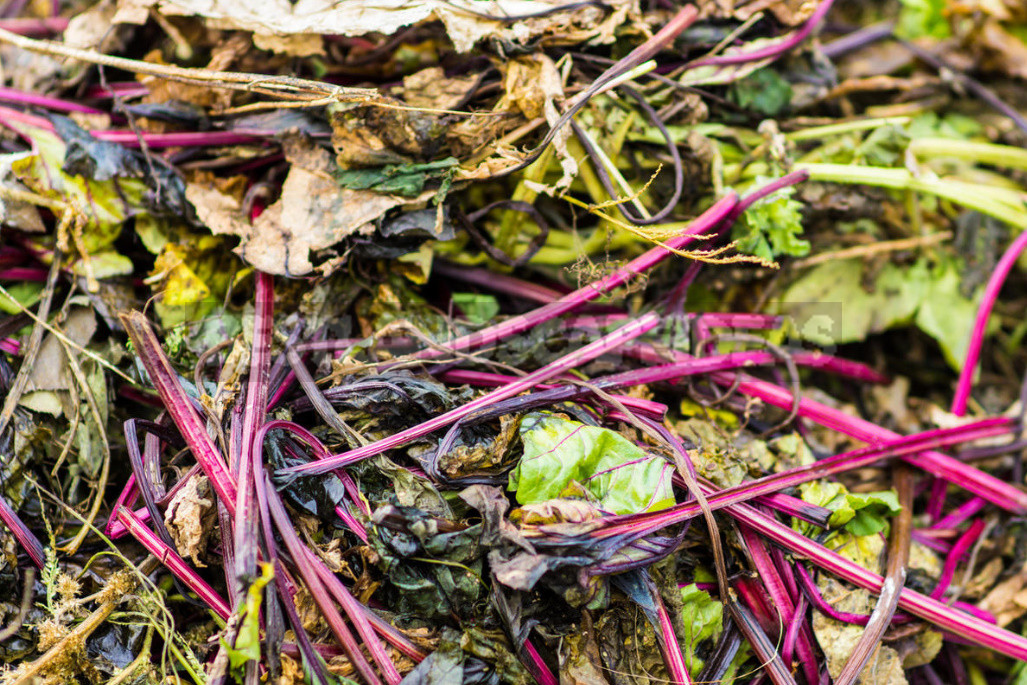 So often we, collecting tomatoes, cucumbers or zucchini, discard the spoiled fruits, and then forget about them. Such a vegetable “carrion” should be immediately removed from the beds, because it will become a source of infection in the next season and will quickly destroy the planted healthy seedlings. 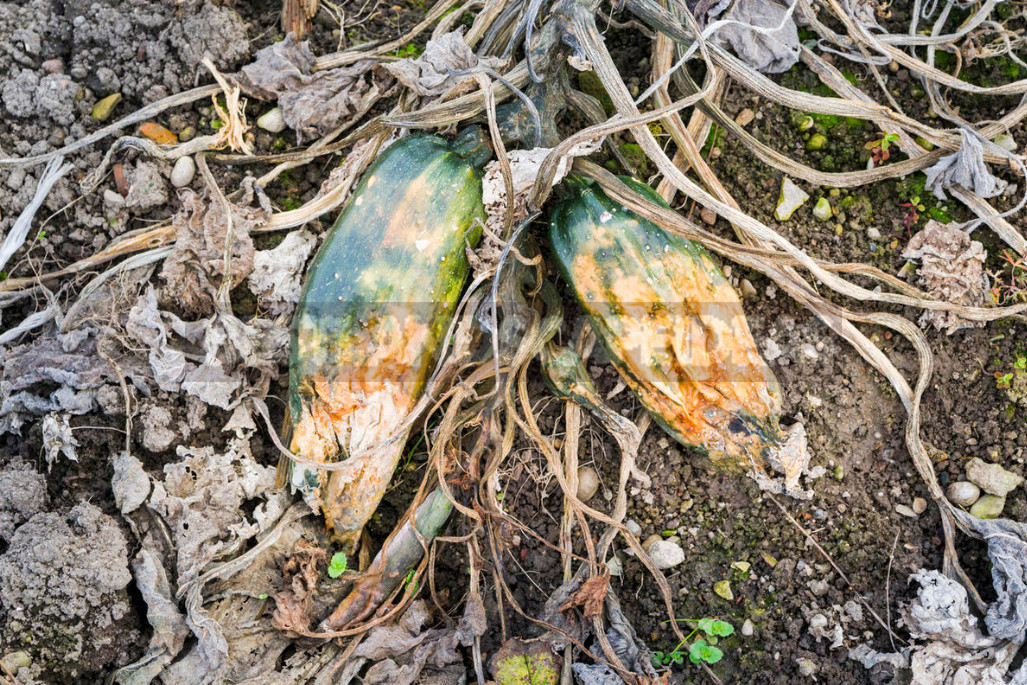 Most weeds are violent aggressors. They continue to actively develop until winter, building up powerful rhizomes and sowing another batch of seeds on the ground. If they do not interfere, next spring the soil will be covered with a thick carpet of new invaders, adding to your troubles. To avoid this, regularly weed out weeds or sow the site with siderats that “crush” weeds and help restore soil fertility. 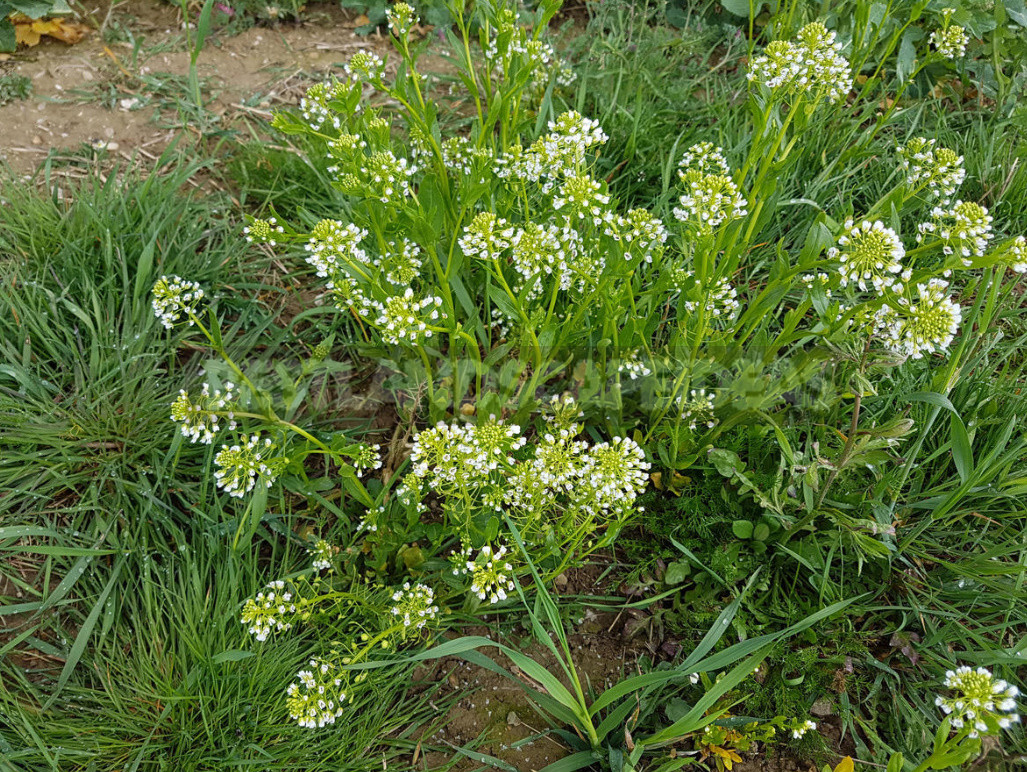 What to do with plant residues

If in the current season you not noticed in his garden and on kitchen garden nor single sign of disease and nor one harmful bugs, you can to leave foliage and tops on the surface soil. But in this case, you will rush to the site pests from neighboring not too prosperous possessions – it’s rodents and insects that overwinter in a pile of garbage, and next spring will certainly decide to stay on your cozy acres.

Therefore, any plant debris is better to remove to a secluded place-to lay in a compost or build a warm bed out of it. As an option-to burn waste and get valuable ash or at least to bury plant debris in the place where it lies. 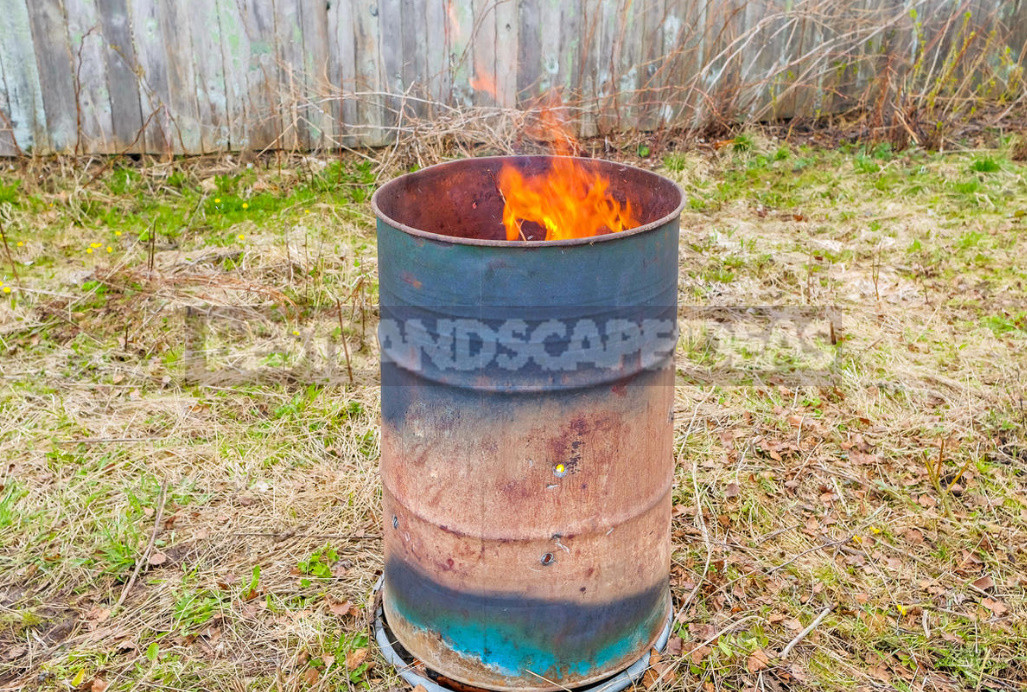 Some summer residents use fallen leaves and tops for mulching winter crops and shelter thermophilic perennials for the winter. In this case, it is worth adding to the layer of mulch “flavors” – dry grass wormwood, tansy, mint, Melissa, cilantro, etc., the smell of which will scare away pests. To protect such “houses” from rodents, you can pour to them and purchased poison.

Pre-grind branches, leaves or grass will help you a special device-chopper.

With infected plant residues should not stand on ceremony. The best thing you can do is burn the dangerous garbage or take it away from your possessions. However, some regret such organic raw materials and stuff them in compost boxes. But, having received in 1-2 years fertilizer and making it under cultural plantings, it is possible to provoke a new outbreak of the disease.

READ  How To Prolong The Life Of An Old Fruit Tree 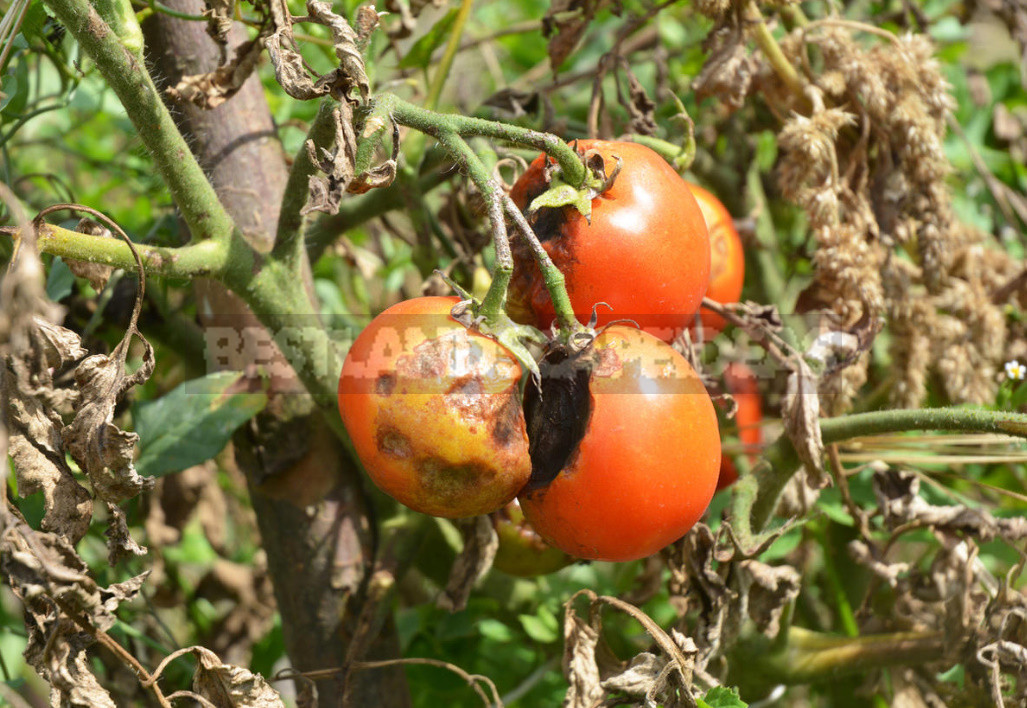 If you lay in the compost sick tops and affected fruits, study in detail the characteristics of a particular disease and maintain the plant residues in the compost until the pathogens die.

Savvy summer residents do easier. Diseased fruits and tops of vegetables are removed from the garden and dug under fruit trees and berry bushes. Fallen leaves from diseased trees-shrubs and rotten fruit-berries are moved from the garden to the garden, and then they are sealed in the soil on the beds during the autumn digging. 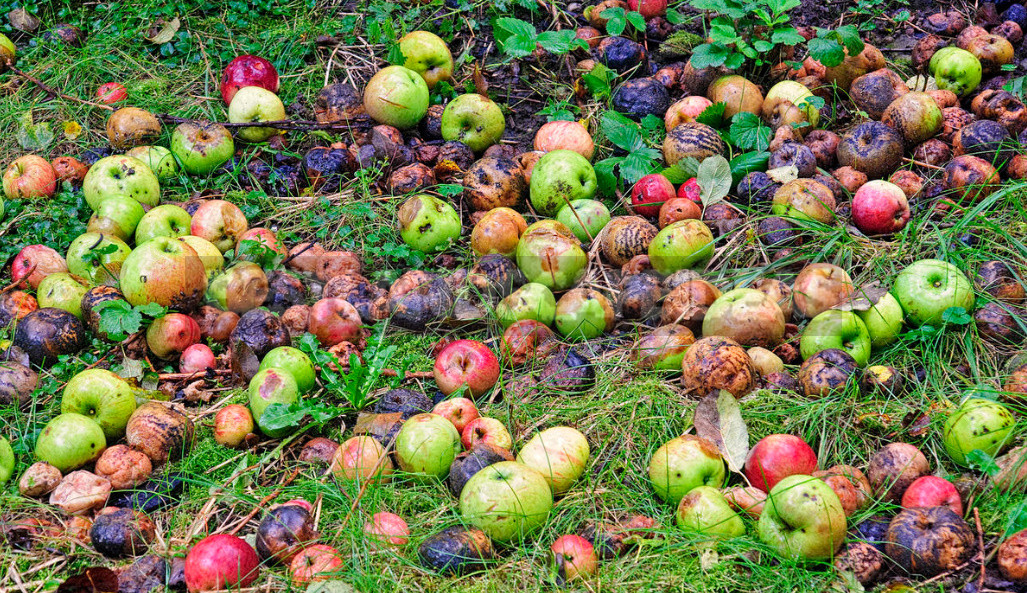 This logic is not without meaning: garden crops are not affected by infections of garden plants, and vegetables do not suffer from diseases of trees and shrubs. Thus, gardeners are able to dispose of hazardous waste and at the same time increase the fertility of the soil on the site: in the garden with the help of rotted vegetables, and in the garden-thanks to the rotting of leaves and spoiled fruit.

If your cultural plantings annually suffer from attacks of diseases and pests, and harvests leave much to be desired, take a look at your autumn garden. Maybe it’s time to join the flow of clean summer residents and finally remove dangerous plant debris from the site? If you use plant residues wisely, they will become an indispensable organic material that will help to maintain the health of the garden and get a generous harvest. 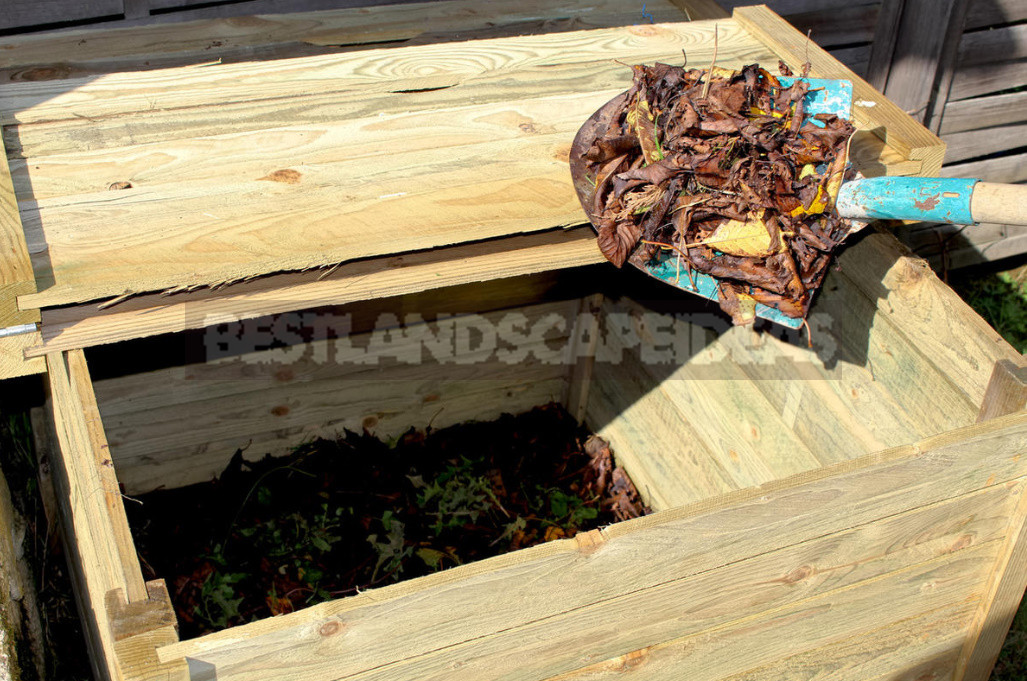 Dear readers, what do you do with the plant residues that appear on your site at the end of the holiday season? What waste, in your opinion, can be safely left in the garden, and what certainly should be removed from the soil surface? Share your opinion in the comments!

"Sweet Couples" - Preparing Gifts for Valentine's Day
How To Plant And Care For Zucchini
Iodine From Phytophthora and Other Fungal Plant Diseases
Healthy Eating Habits: Antioxidants for Health (Part 2)