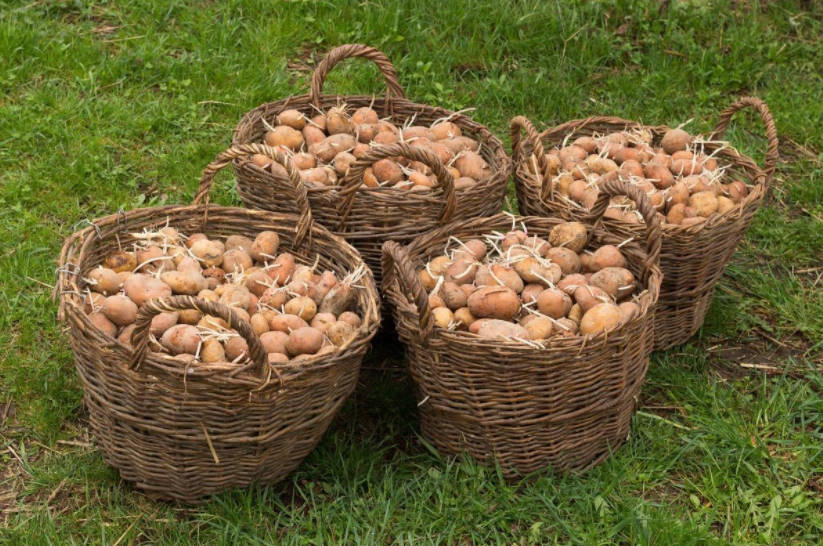 Before planting potatoes, tubers need to be prepared. This will take about 1-1.5 months.

The tubers must be washed, then folded into a bowl, pour hot water (45°C) and hold it in the water until it has cooled to room temperature. Separate dilute the potassium permanganate (potassium permanganate) and gradually add to the bowl with potatoes, stirring until the water turns pink. Let stand for 15 minutes, remove, drain the water, tubers should be washed, dried. This is done in order to remove from the surface of the tubers of pathogens.

Put the tubers on the light for greening for 15-20 days. This is done in order to form a plant venom solanine in the subcutaneous layer. Such greening of potatoes will not touch any rodents or gnawing insects. The easiest way to keep dried tubers in glass jars on the windowsill, banks from time to time to turn. Or spread the potatoes in a single layer on the Newspapers on the cabinets or windowsills. 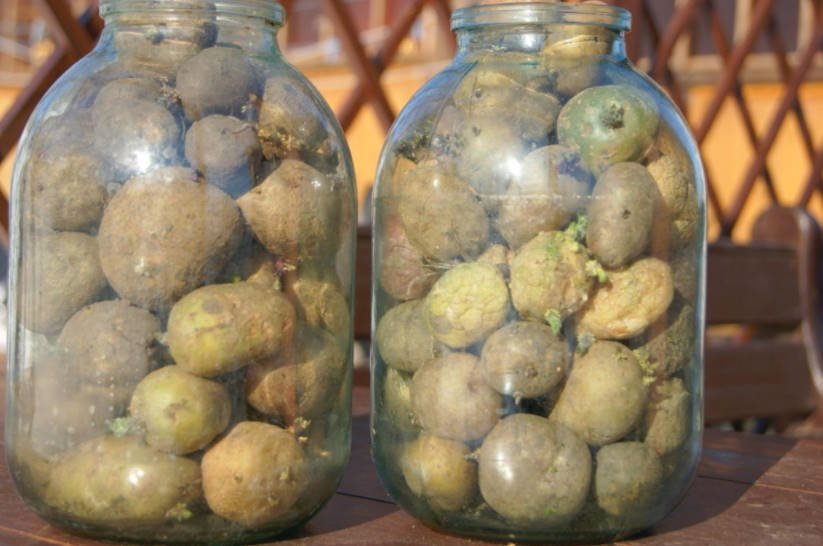 Then the tubers need to germinate, for this they should be removed in a dark and warm place. It is convenient to lay them out on cardboard boxes in one layer, not too close to each other (to give freedom to sprouts), then to lay a layer of Newspapers and to lay out two more layers, interlacing them with Newspapers, to close a box and to put on a stool about the battery. On the floor to put the box is undesirable, because the floor temperature is much lower, and the tubers will sprout unevenly. In order to form shoots 4-5 cm long, it will take about two to three weeks.

You can start planting when the bird cherry begins to bloom in your region, and even much earlier — as soon as the top layer of soil dries.

As you know, the tubers do not grow on the roots of potatoes, but on the horizontal, growing on the bottom of the stems of shoots, called stolons. These shoots don’t need land, they need darkness. They will grow not in soil, but even under the blank covers of opaque material. So don’t worry about that. Mark the garden right on the virgin land, despite the fact that there you have begun to grow weeds. In no case do not dig the ground! 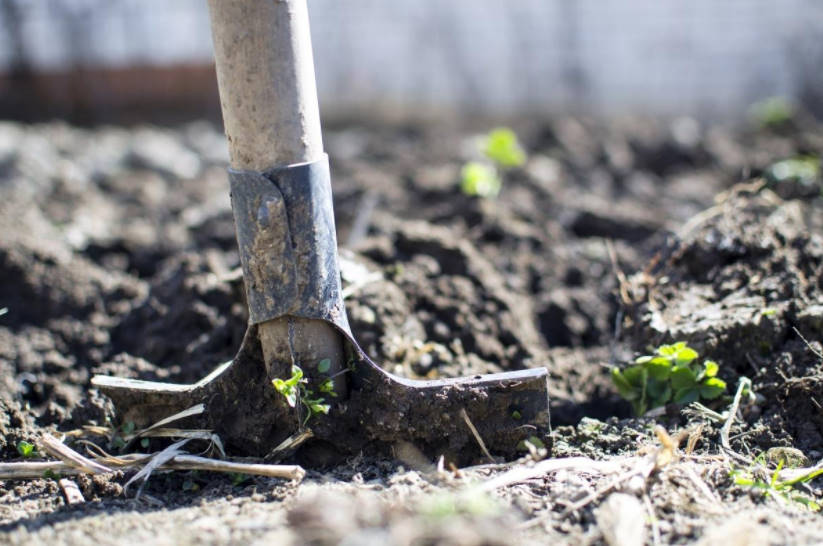 In no case do not dig the ground!

Sprouted tubers play straight raw the soil. It is more convenient to make two rows at a distance of 40-50 cm from each other, and the tubers are laid out in each row after 25 cm from each other. It is necessary to leave 20-25 cm from each row to the edge of the garden. Thus, the width of the landing will be 80-100 cm, the length you can take any, but you need to know that you will need for each meter of planting 4 tubers in one row and 4 in the other.

It is best to plant tubers the size of a chicken egg (in one kilogram of such tubers about 20 pieces), because in such a tuber there are just as many nutrients as the plant needs to grow to 25-30 cm and have time to develop a good root system. 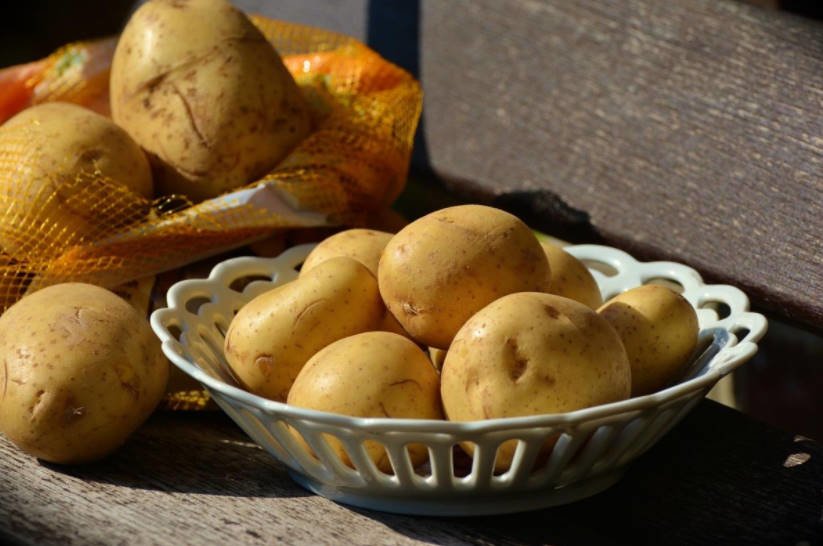 Optimal size of tubers for planting — with chicken egg

If you plant too small tubers, it is better to put them in one nest at once for 2-3 pieces, otherwise there will be too few stems, and accordingly, the harvest will be small. If you put too large tubers, then with a large amount of food, the above-ground part will increase, and the development of roots will be delayed. Therefore, large tubers should be cut along in advance so that there is approximately the same number of sprouts on each part (in the upper eyelets much more than in the lower, so it is necessary to cut along, not across). Let them lie for two days to test the slices, then sprinkle with ash and only after that plant (otherwise, through the cuts in the tubers, bacteria will penetrate rot).

The number of sprouts awakened on each tuber can be increased. To do this, on each potato a week before planting, you need to make a deep cross-section with a sharp knife or simply remove the skin in the middle of a thin strip in the transverse direction. This will cause to Wake up dormant backup kidney in the lower part of the tuber and, therefore, receive additional stems.

The potato bed should be in the sun all day, otherwise the tops will be huge and the tubers will be small.

In one row it is better to plant the ultra-early varieties to eat young potatoes as early as possible, and in the second row to plant the medium-grade to have enough harvest until the end of the season. 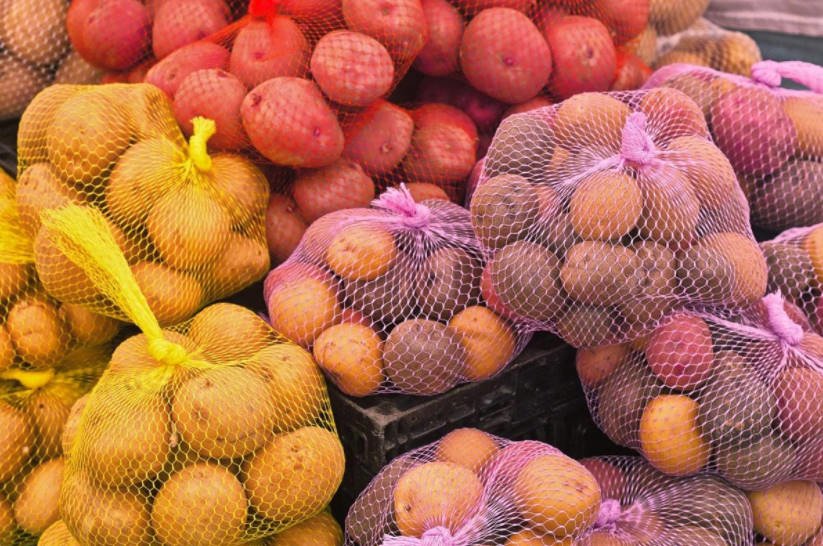 Early potato varieties are ready to eat 60-70 days after emergence. From mid-July they can be eaten. Remove these varieties should be in early August, otherwise they just rot in the ground.

READ  A Pest-Free Garden — Is It Possible?

Mid-early varieties are ready for use in 70-80 days and should be removed at the end of August.

Medium varieties are ready in 80-90 days, they should be removed in early September.

Now the most important thing is to protect potatoes from spring frosts. To do this, the rows with potatoes should be covered with dry breathable material. Hay is best for this, but not straw. You can use dry leaves or just rake with a compost heap of the upper, but always a dry layer. 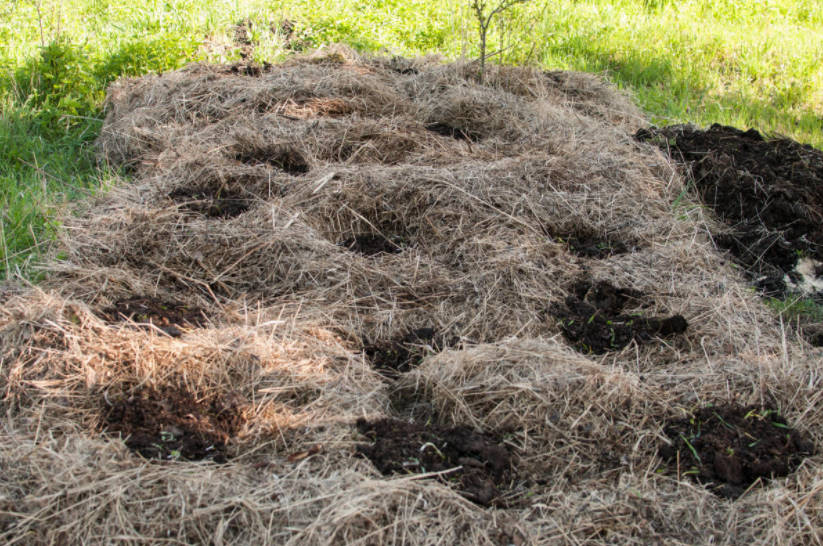 If you have not prepared covering material since autumn, you can use black and white Newspapers or wrapping paper. They need to break apart, crumple and fall asleep potatoes. No need to fall asleep between rows.

To cover not grind the wind, cover the bed of the old spunbond or bags. The film should not be used (under it all starts to sing). When the frost is over, lutrasil can be removed and begin to add to the garden with planting all that you usually take out in the compost.

Pour the slops between the rows, and the cut grass, weeds are put all over the garden, right on the hay or newspaper, but not filling up the potato shoots. All summer and will put the compost on the potato patch, acucela younger potato land, and the weeds. 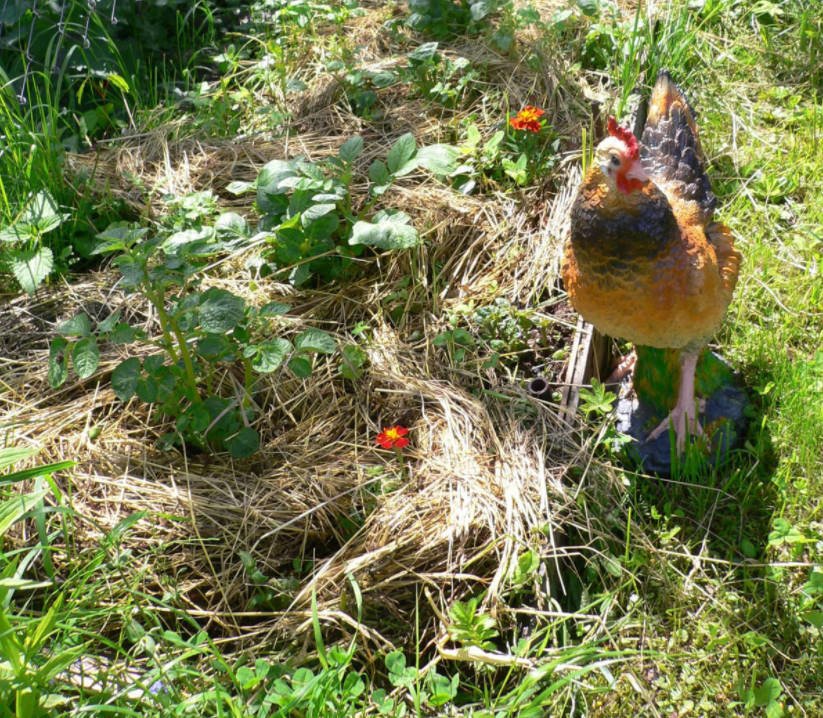 All summer Spud potato land, and the weeds

There’s a danger here. Compost rewinding, settles, and young tubers can be exposed. This can not be allowed, so when you bring another batch of weeds, look where it needs to be sprinkled, so that the club is not bare

Care of planting and harvesting

As soon as the potatoes begin to bloom, tubers on the stolons begin to grow at the same time. On seed reproduction through flowering potatoes spends a lot of effort, so if you do not give it to bloom, he will direct all his forces on vegetative reproduction, increasing tubers. 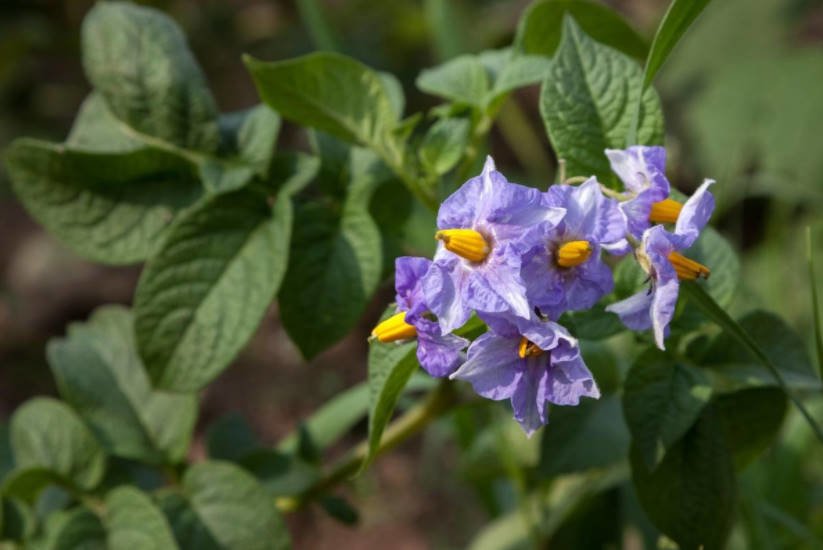 Flowers potatoes do not need!

Please note: almost all foreign varieties of potatoes practically do not bloom! This is one of the areas of breeding work on potatoes. Flowers and seeds not need, need tubers.

Of course, to break the nascent buds on a large field is unrealistic, but here we are talking about a couple of beds in a small area, so I advise you to break off the tops of the potatoes as soon as the plants in the ranks close. First, you stop excess growth of foliage, and second, get 2-3 extra tuber.

READ  What is Superphosphate and How to Use It

Usually I leave one bouquet of flowers on one grade and another — on the second. As soon as the flowers begin to wither, I go to harvest the first tubers. To do this, it is enough to move the layer of compost and choose the largest, clean, lying directly on the ground tubers, and then gently push the compost into place. Since the damage to the stolons does not occur with this method of digging, they continue, as if nothing had happened, to increase the following tubers. 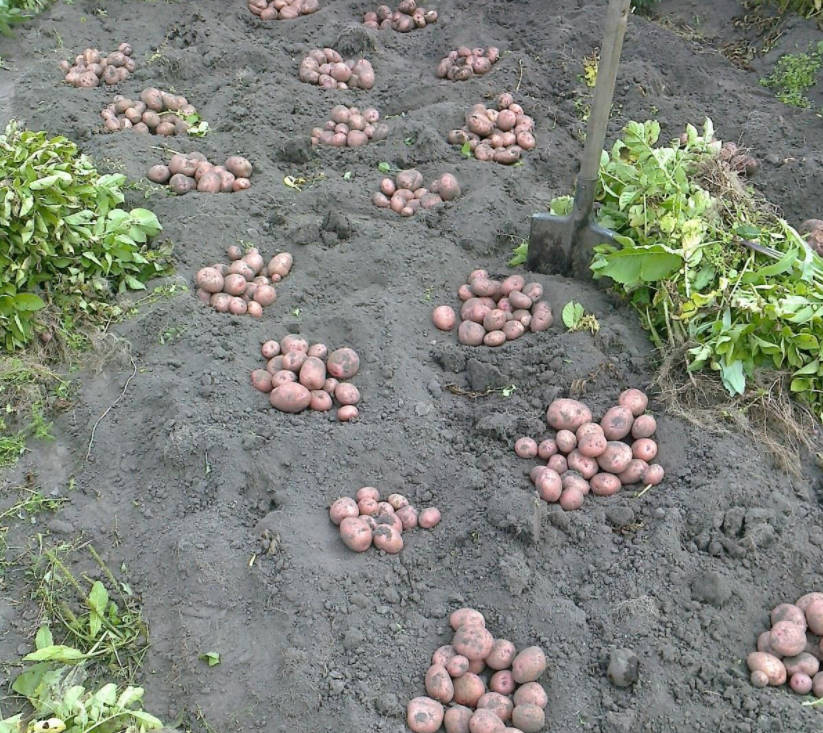 Here is a harvest gives the traditional method of growing potatoes

When the harvest from the early series is selected, I spread out the tops of the tops of the tops of the tops of the tops to dry, and leave them in the garden. Usually put in compost tops of tomatoes and potatoes is not recommended because it contains solanine, but under the influence of the sun, rain and air solanine is destroyed. So it will happen on your potato bed, so there is no need to drag the tops anywhere to dry. Place directly on the surface of the beds and not fill it up with weed. If you continue to grow around the station, then take the weed the weed to another location, for example, for filling of faeces from the toilet. In the same way you do with the second row of a later variety. Neterprise compost pile, which you have to place the beds with potatoes, leave to spend the winter this way.

So, the potatoes just planted, nothing it does not do (not a dig, not a Spud, not watered, not fed and not dig), and only harvest. And weeds and mown grass still have to be somewhere to wear, so it is better to carry it to the place of planting potatoes, but then you do not need to carry the rotted compost somewhere again. It is not required and take out from the beds of the tops. How wonderful it is to eat your potatoes all summer without doing anything!