Spring! At this time, awakens all living things, regardless of human preferences. And if the flowering of greenery and chirping birds summer residents are happy, the appearance of awakened garden pests — definitely not. Unfortunately, rarely who can be administered for their fruit trees and shrubs. As a rule, without the timely protection of a good harvest can not be obtained.

We decided to make a shortlist of 10 pests that awaken in the first warm days and cause the most noticeable damage at the beginning of the season. Consider their effect on the most common crops in our cottages and talk about ways to protect plants.

The maximum damage to the harvest of apples is caused in early spring by a formidable enemy — Anthonomus pomorum. This insect winters in the top layer of soil, under fallen leaves, in cracks of bark. As soon as the snow melts and the temperature begins to rise, bugs come to life and climb the tree. Their important distinctive feature is the mass destruction of buds of the flowering tree. 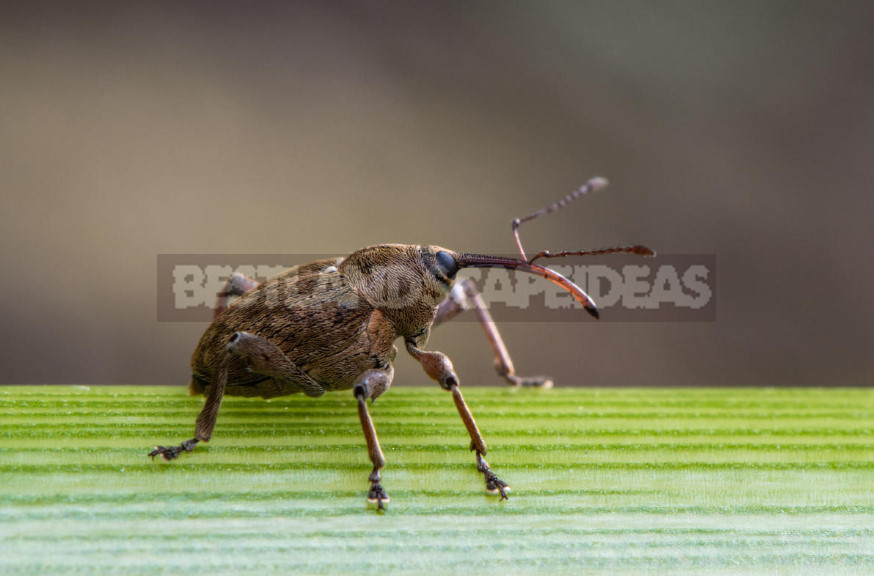 Females lay one egg in each Bud, and only hatched larvae will try to destroy all its contents. As a result, the flowers wilt, never revealed, and emerging young adults continue their dirty business — prick proboscis budding fruit and gnaw the soft sheets.

In the spring work well in the protection of the adhesive trapping zone, which it is desirable to burn after flowering Apple trees.

Pear lovers should keep in mind that they have a serious competitor. Anthonomus pomorum is no less willing to climb these fruit trees. Anthonomus pyri also has similar behavior. Therefore, all the troubles described above relate to pears too.

But the most harmful insect for this fruit tree is considered to be Contarinia pyrivora Riley. It is a personal enemy of the pear, as it feeds only its young leaves. After wintering in the ground insects, having the appearance of a mosquito, fly at the end of April. The female lays eggs between the hairs of a young leaf that has not yet blossomed, and soon the larvae begin to suck the juice out of it. 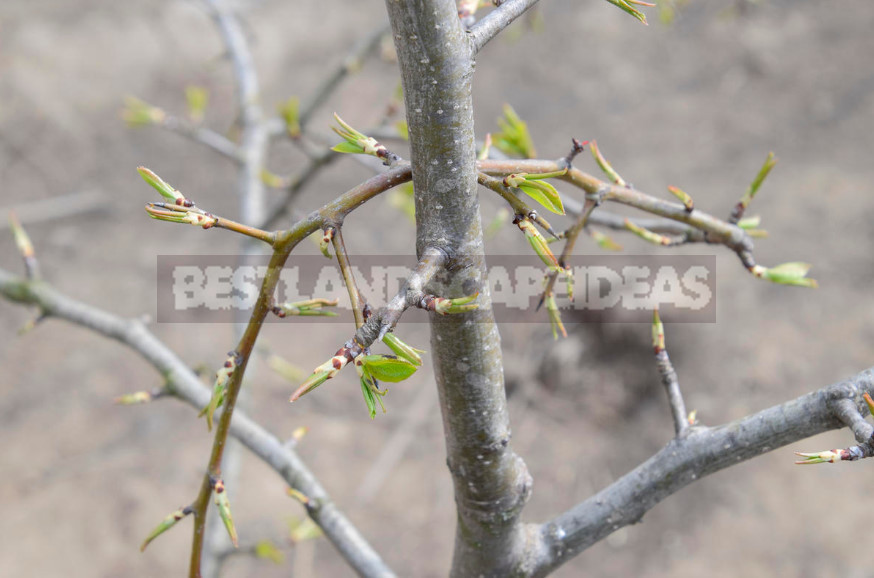 Sick leaves become brittle, dry up and twist upwards, where pupae develop. These nests are clearly visible in autumn, so one way to fight is to collect them manually at the end of the season.

Rhinchites auratus is the number one enemy for cherry, cherry and other stone trees in the garden. This is a small shiny bug up to 10 mm long greenish-bronze color. Has a characteristic proboscis. 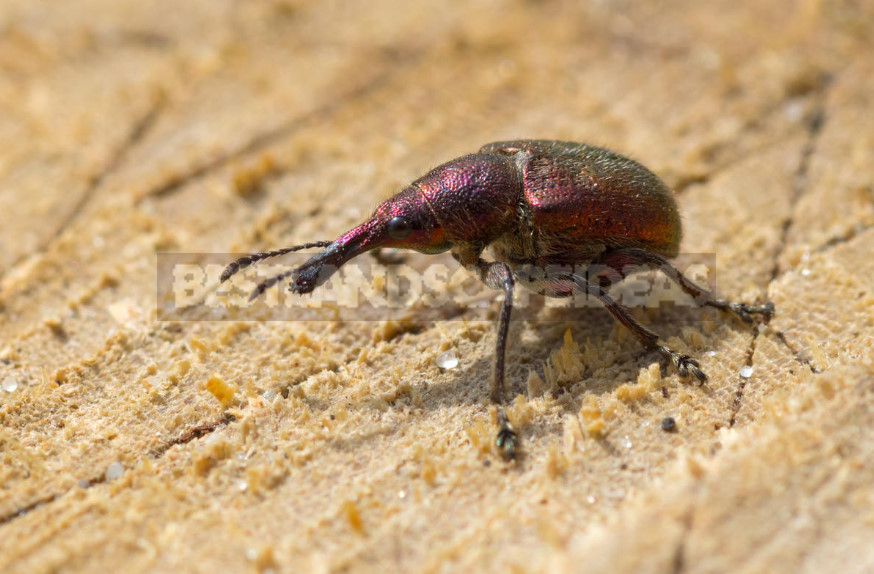 Winters in the upper layers of the soil, and during flowering rises on trees and eats kidneys, flowers and ovaries. Females lay eggs in the fruit when they begin to color.

A little later, about 10 days after flowering activated another dangerous pest — Rhagoletis cerasi. Its larvae (white worms) eat the flesh of the fruit, making them uneven, sluggish, matte color. Of course, such cherries and cherries are not suitable for food. 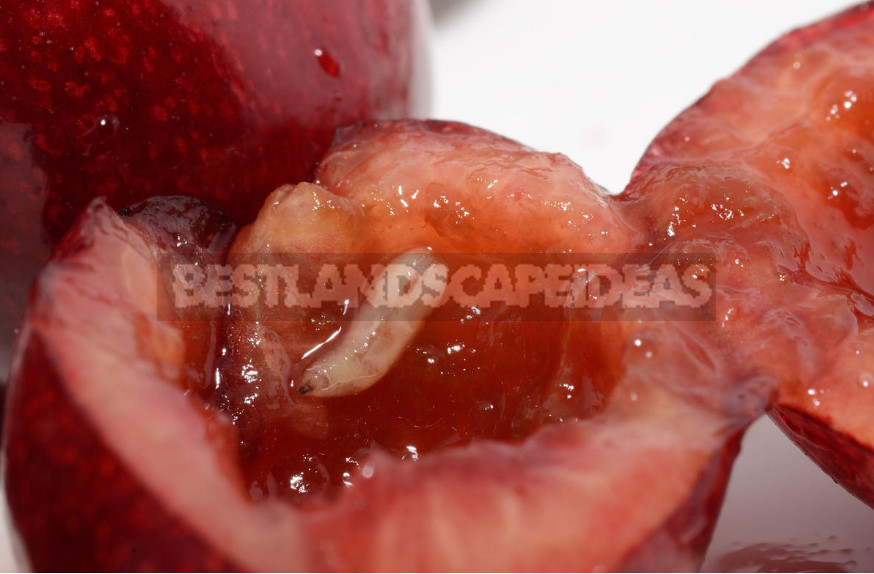 The first spring raspberry pest is Lampronia rubella Bjerk. Overwinter in cocoons under loose bark, among dead leaves and other plant debris. In early spring, the caterpillars climb the stems and begin to gnaw out the kidneys, then take over the shoots. Butterflies appear during the flowering of the shrub and begin to spoil the flowers, laying eggs in them. 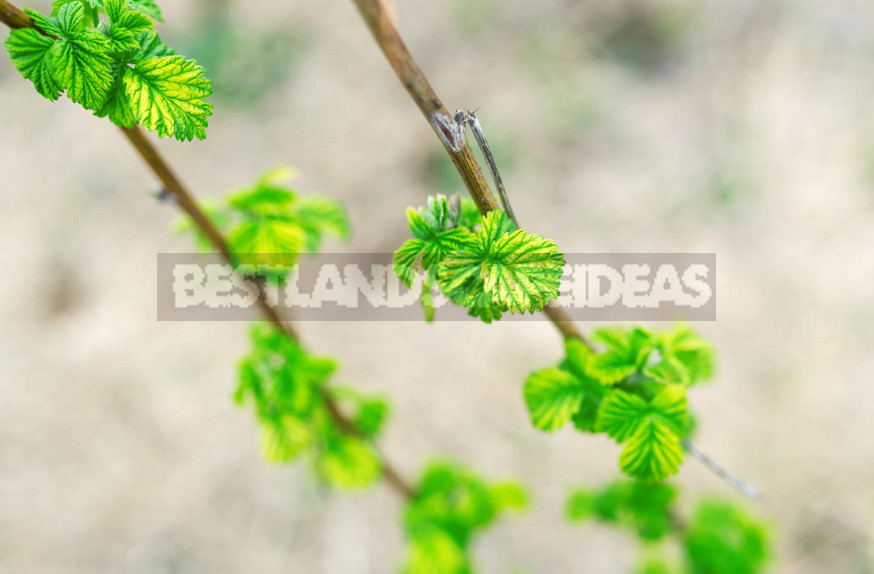 The common enemy of raspberries and strawberries is Anthonomus rubi Hrbst. He destroys both cultures, and first spoils the buds of strawberries, as they are put forward earlier, and then goes to the undisturbed raspberry flowers. If you know about the large spread of such an insect in your area, you should try to plant these berry crops away from each other. 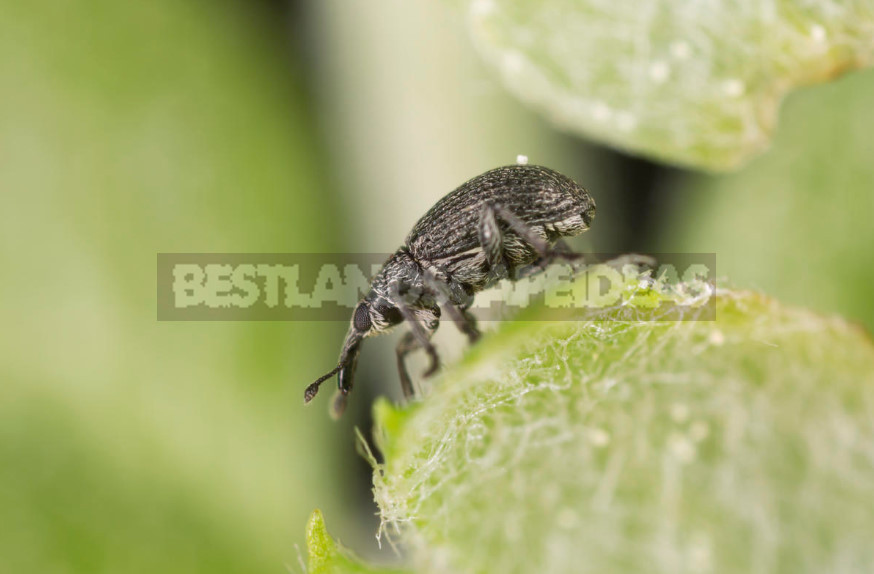 Aleyrodidae can be found in early spring, when the first work on the strawberry garden begins. Though this insect is quite small, it can be seen, slow down Bush. Tiny white butterflies cling to the underside of the leaf and lay eggs. Hatched larvae suck the juice from the leaf plates, which can seriously oppress the plant.

The most malicious enemy of the currant – Cecidophyopsis ribis. All his life he spends on a Bush, winters in the kidneys, where females lay eggs, activates with increasing temperature. Affected kidneys are characterized by bloating, as each grows and strengthens a large number of larvae. The diseased kidney does not develop or does it wrong — the appearance of ugly shoots and flower brushes, from which in the end nothing good happens.

The most popular means of struggle — dousing until awakening buds bushes very hot water. As a result, the larvae are simply welded.

We should also mention aphids, which is ready to eat young leaves and shoots of almost all fruit and ornamental plants. And its malignancy is such that in “hungry” times it begins to survive even at the expense of plants, famous for their insecticidal properties. That only is the spectacle plastered with these small parasites of the legs of onions and garlic! The fight against this pest should begin in early spring. 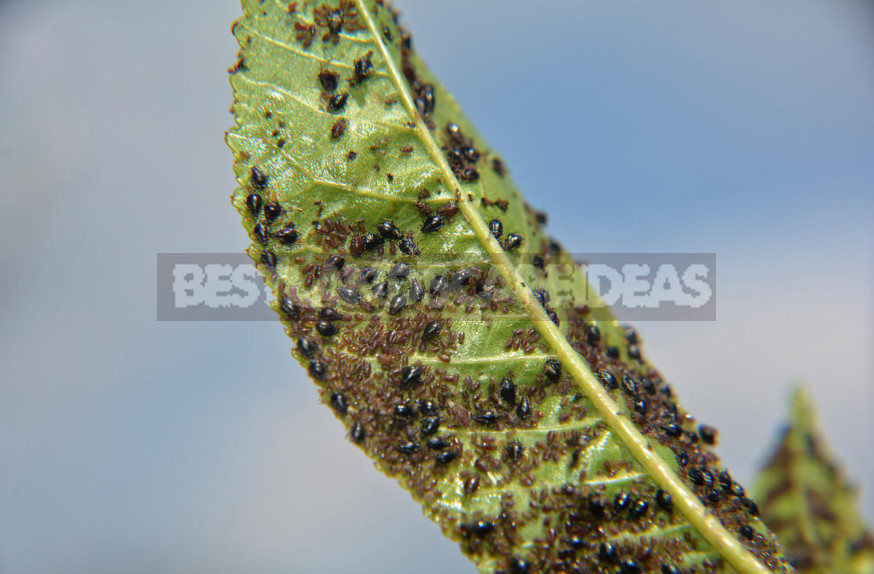 Above are listed, of course, not all, but only the main and most early waking pests of the garden. Unfortunately, during the warm season their varieties appear much more. The task of the gardener — not to allow themselves to win.

In spring, all kinds of weevils are useful to shake off from the branches early in the morning, when the temperature is still low (up to +10°C), and the parasites are shackled with cold. The device of hunting belts will not allow crawling pests to climb a tree, and then descend from it to pupate in the ground. These simple devices will serve as a barrier for ants, bringing aphids to the ends of the branches of Apple trees, cherries and plums. It is useful to remember that the natural enemies of aphids — ladybugs, so their involvement in the garden is very useful.

If the concentration of pests in previous years are quite large, or by circumstantial evidence you suggest that in the coming season there will be more ordinary, necessary spraying of chemicals. They need to start before the full Bud on the trees and shrubs — on the green cone. This may be the so-called second spring treatment of the garden, the first is usually done by fungicides “on the bare tree” from diseases. 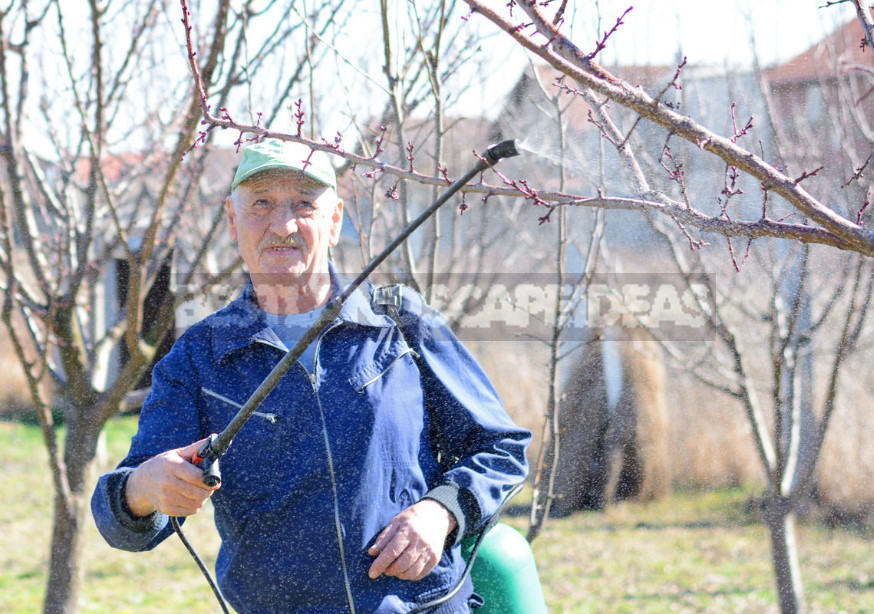 Of course, gardeners have gained quite a lot of experience in the fight against harmful insects with the help of herbal infusions and other environmentally friendly means. Good insecticidal effect have infusions of onion and garlic, tansy, dandelion, wormwood, citrus crusts.

If we add to these solutions a special soap or grated green common, the effectiveness is increased, since the resulting tool adheres well to leaves and branches. And this spraying on the colony of aphids leads to the fact that the resulting thin film stops air access and pests die. 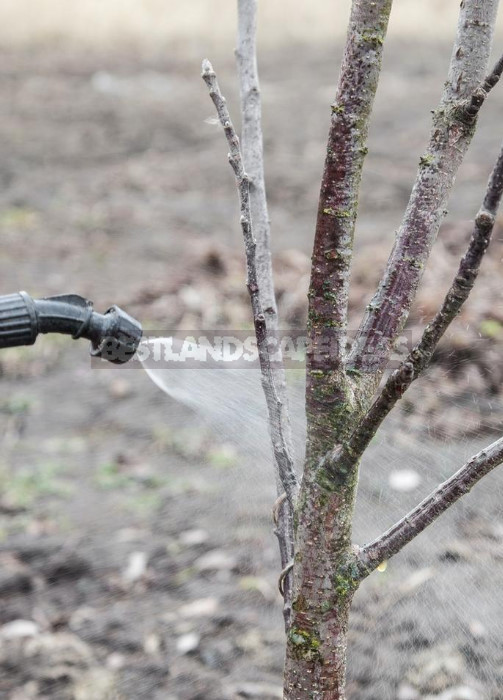 With Anthonomus rubi Hrbst can cope tansy infusion: 1 kg of freshly harvested plants (or 350 g dried) pour 5 liters of water, insist day. Then, the infusion should be boiled, drain and refill the stand with water to 10 L. Spray raspberry better in the evening during the period of flower Bud formation. This infusion will also help in the fight against other species of weevils. 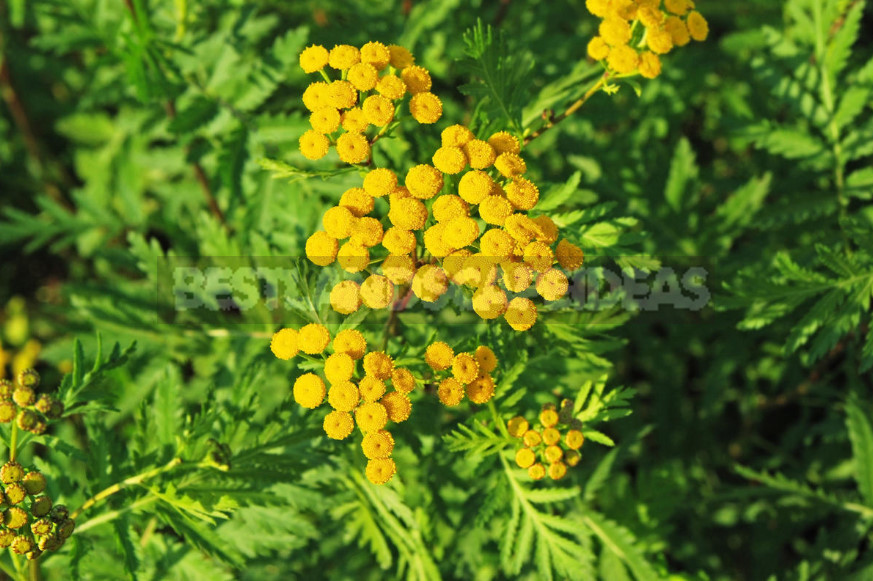 Decoction of onion husks also works well against aphids, and you can prepare the so-called “ambulance”. To do this, 200 g of onion husks pour 10 liters of almost hot water, insist 12-14 hours, filter and spray the affected plants without diluting the solution.

Another way to combat pests is planting plants that will scare them away. Place calendula, tansy, wormwood and nasturtium near fruit trees and berry bushes. Perhaps these plants will not save you from pests completely, but to reduce their number will definitely help. 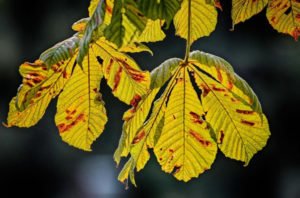 Diseases and Pests of Plants: Autumn Analysis of the Problem 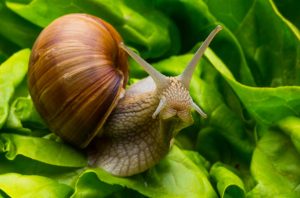 Helix Pomatia On The Site: Ways To Fight (Part 1)

Helix Pomatia On The Site: Ways To Fight (Part 2)