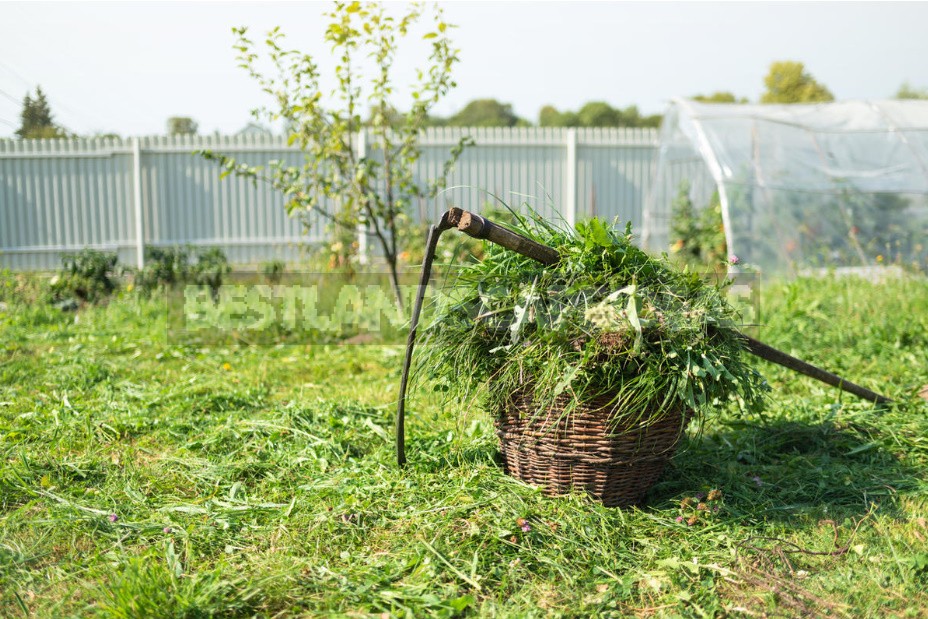 Have you started planting yet? Then there is time to do something abstract, not directly related to the country chores. For example, get acquainted with the history of familiar gardening tools. Today I suggest you pay attention to the tool, which is not so common among summer residents. It will be about the scythe.

Now not all summer residents have a scythe at their disposal, preferring a trimmer, or even a lawn mower. To work with a scythe, you need to have a knack. Yes, and there is not enough space between the beds to stretch properly. And for lawn care, a scythe is not the most convenient tool, because it was invented for other purposes. However, let’s see where it came from among other agricultural tools. 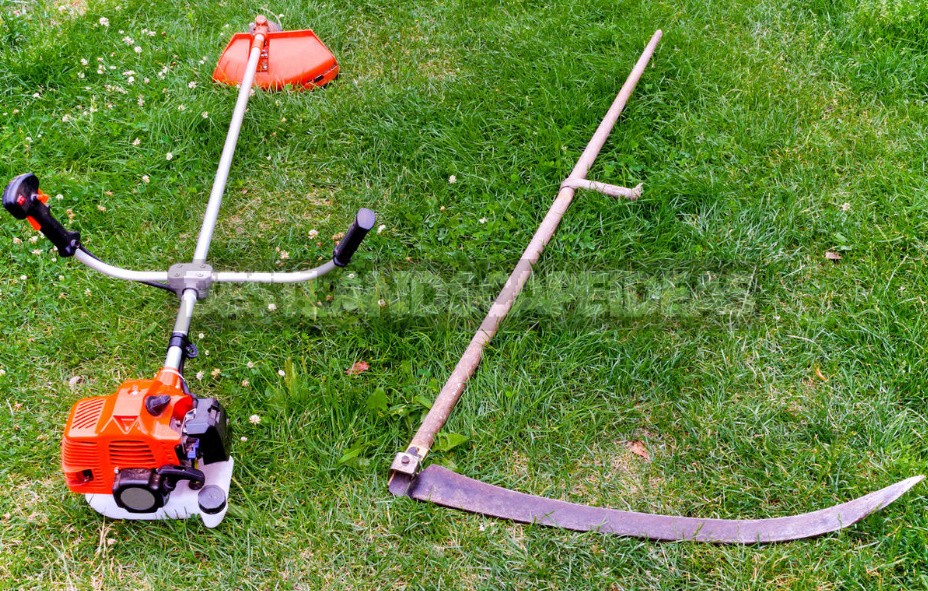 From the Neolithic to the present day

The scythe as a tool for foraging was very important for the farmer: one cow needs about 5 tons of hay for the winter. And if the farm has a lot of cattle? But the hand scythe, which is familiar today, does not have such a long history as a hoe or a shovel. 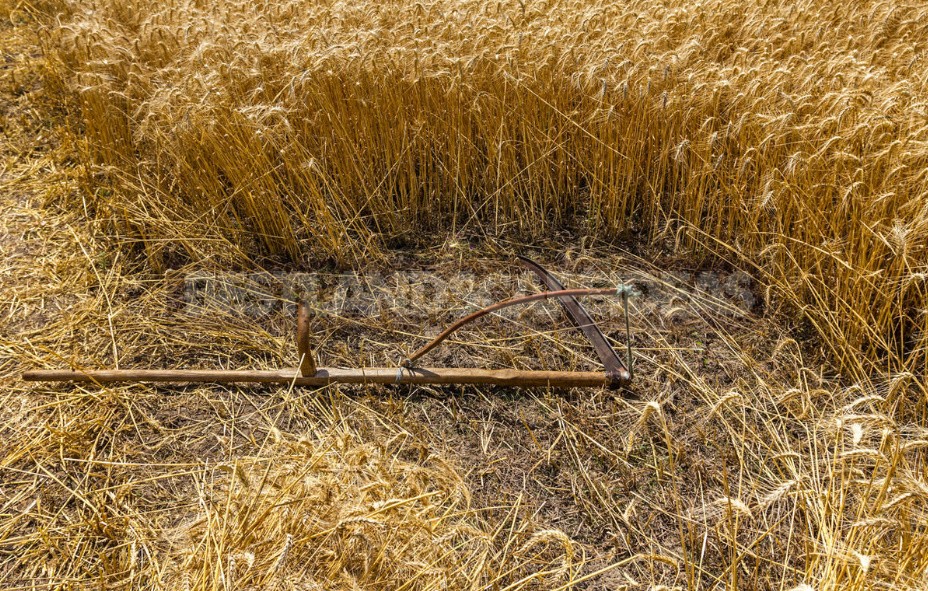 A scythe is a cutting tool. Pointed stones, bone plates, and other materials popular in the stone age are not suitable for its manufacture. Therefore, tools that can be more or less easily cut grass, began to appear only with the development of metallurgy, by the end of the Neolithic era-between the VI and IV millennia BC. And before the invention of the tool familiar to our contemporaries was still very far away.

Today, the word scythe is associated with an ordinary scythe known as a hand scythe. But this type of agricultural equipment for mowing grass or harvesting grain is only a few hundred years old. The manual scythe knife has a rather complex shape, and it requires high-quality steel for its manufacture. 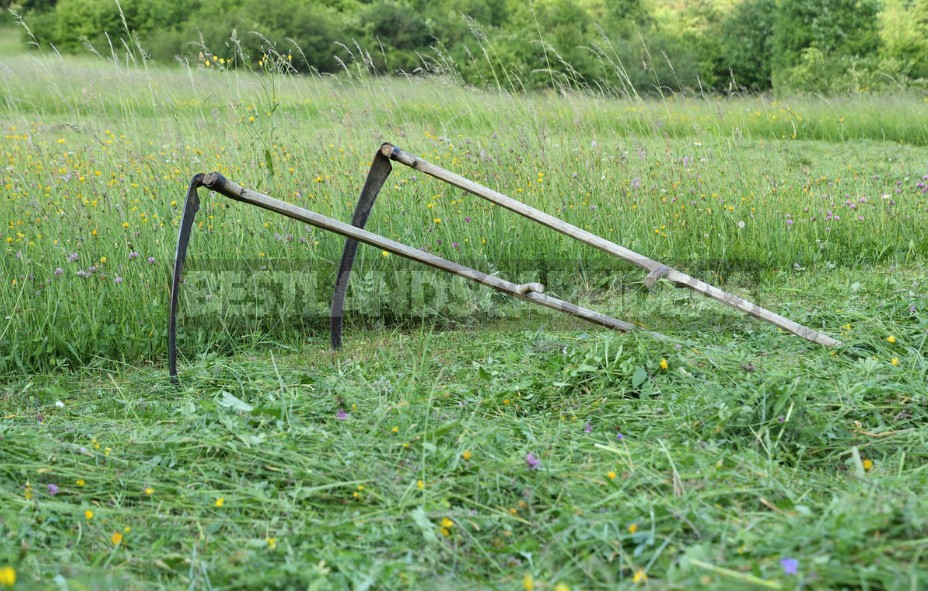 The first tool to facilitate harvest and laying-in of fodder for cattle has become a reaping knife — hammer. It was much easier to make an ancient blacksmith than a scythe knife. 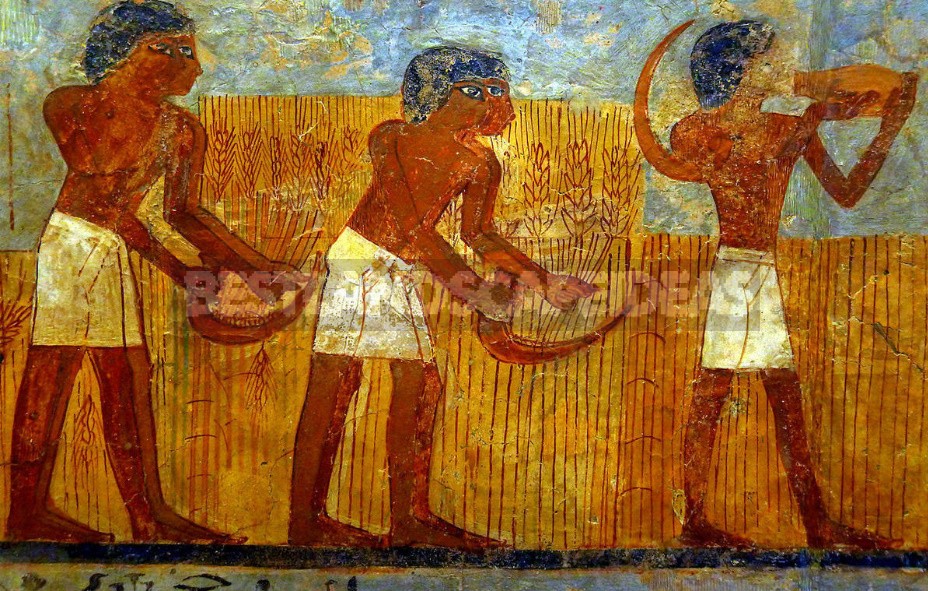 The sickle has a narrow and long curved blade, sharpened on the inside and having notches to facilitate cutting. The metal knife is mounted on a short wooden handle. The venerable age of the sickle has not changed its appearance or reduced its popularity among farmers. Today, sickles look about the same as in ancient images, and are still widely used. However, from the main tool for harvesting grain, it has become a tool of the gardener. It is convenient to cut grass or weeds under bushes or in other places that are inconvenient for the trimmer. 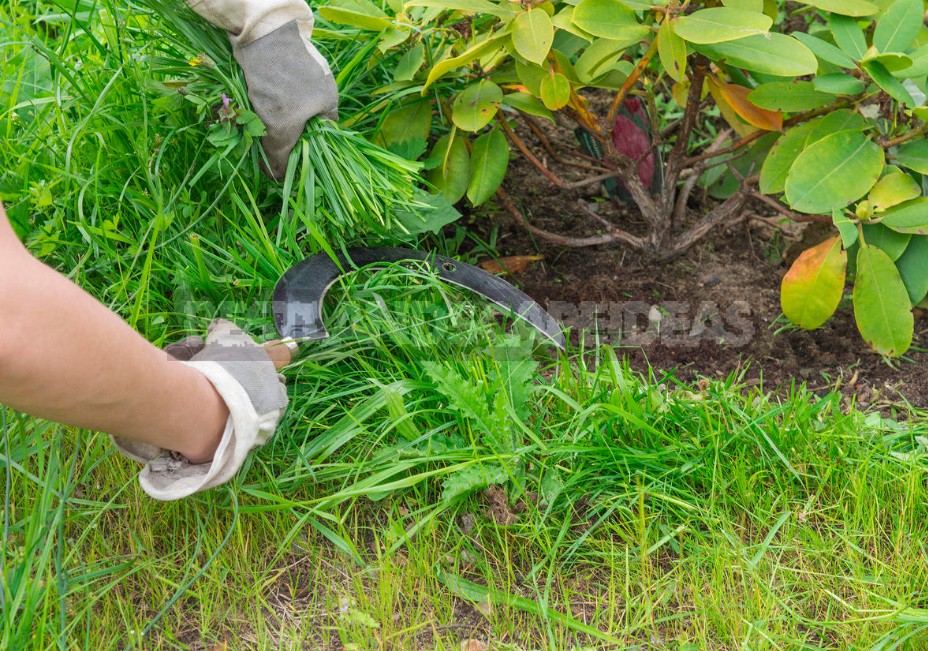 Scythe with a short and curved handle

A scythe with a short and curved handle is another type of tool that can be used to cut grass stalks. It resembles a large sickle on a long curved handle. Work it bent, mow, alternately turning the tip to the left and right. 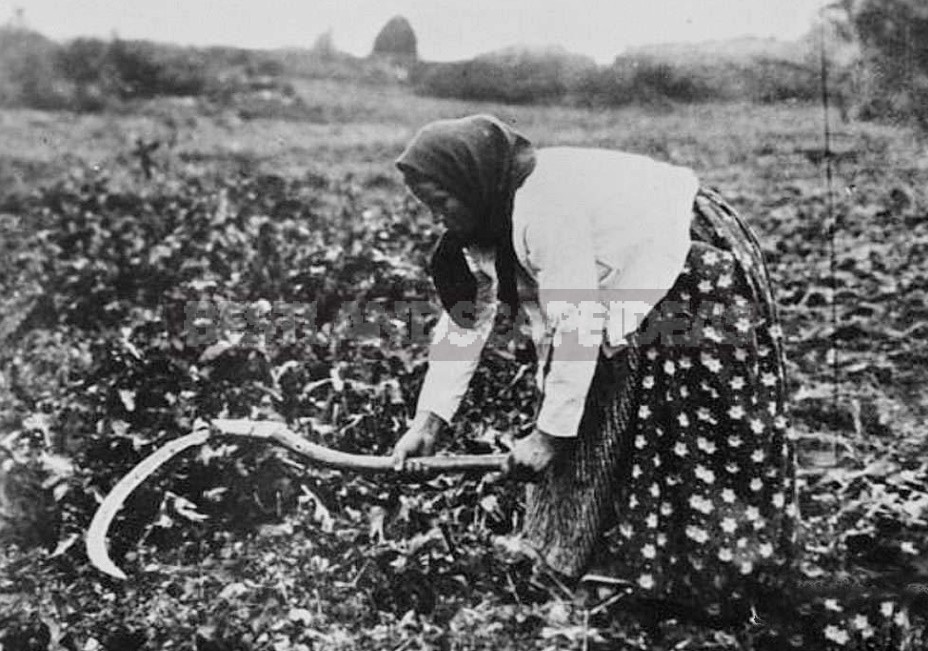 Before the appearance of the scythe-rack (modern scythe, which is worked standing up, straightened to full height), the scythe with a short and curved handle was the tool that farmers used to harvest tons of hay. And now it is also in demand for mowing in difficult conditions: on slopes, forest clearings, areas with hummocks. 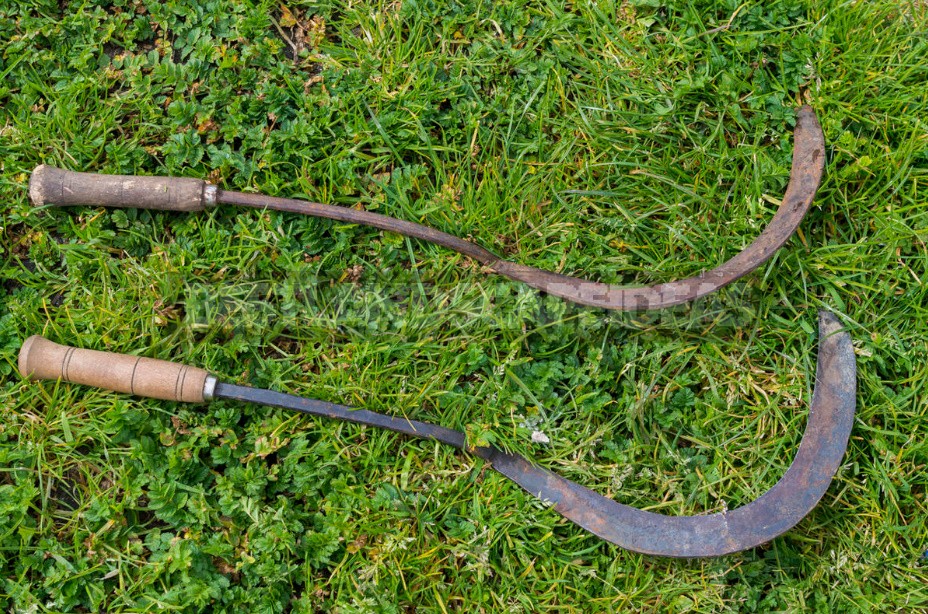 Before the advent of the modern scythe (which is worked standing up, straightened to full height), the scythe with a short and curved handle was the tool that farmers used to harvest tons of hay. And now it is also in demand for mowing in difficult conditions: on slopes, forest clearings, areas with hummocks.

READ  Folding Stool Made Of Board And Polypropylene Pipes

With the development of blacksmithing and agriculture itself (the expansion of cultivated areas), the spit also changed. In Europe, archaeologists date the appearance of these tools with long handles to the III-IV century. A tool that closely resembles a modern scythe can be seen in a miniature depicting the month of July in the agricultural calendar of the monk Vandelbert of Prum (813-870). 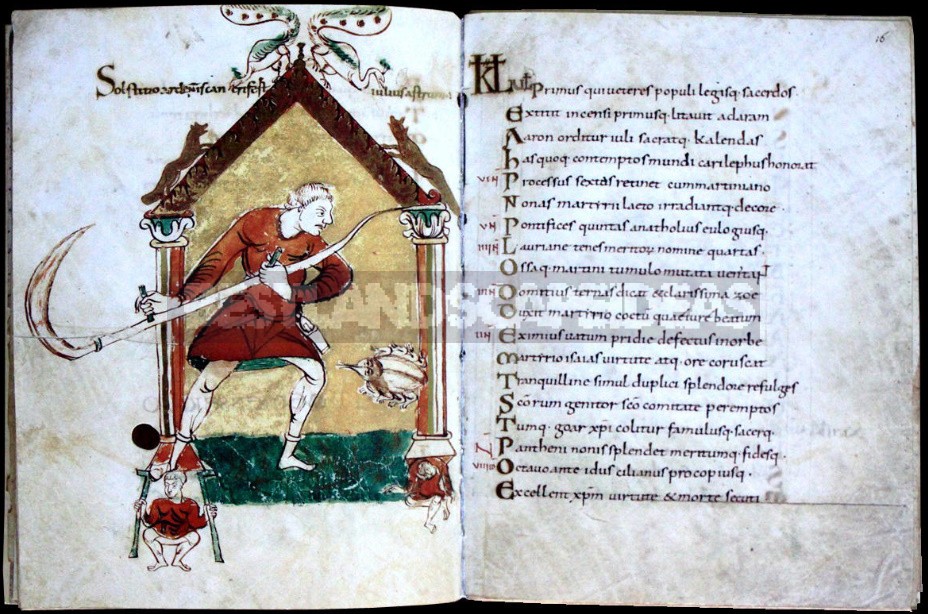 Modern scythe has a long (from 50 to 100 cm) knife. The ancestors measured the length of the blade “in the hands” — in the number of hands that can take hold of the blade. Therefore, they said “five-handed scythe” or “ten-armed scythe”. Today, braids are distinguished by numbers: # 5-50 cm, # 6-60 cm, and so on. The blade of the scythe is slightly bent inward, has a stiff edge along the outer edge, which thickens near the base — the “heel”. At the back of the blade heel blade by means of a ring and wedge fasten to a wooden handle — the snath. The wedge allows you to change the angle of the blade relative to the mower to adjust the tool to the height of the mower and the manner of mowing. And also under the conditions-the height and stiffness of the grass. 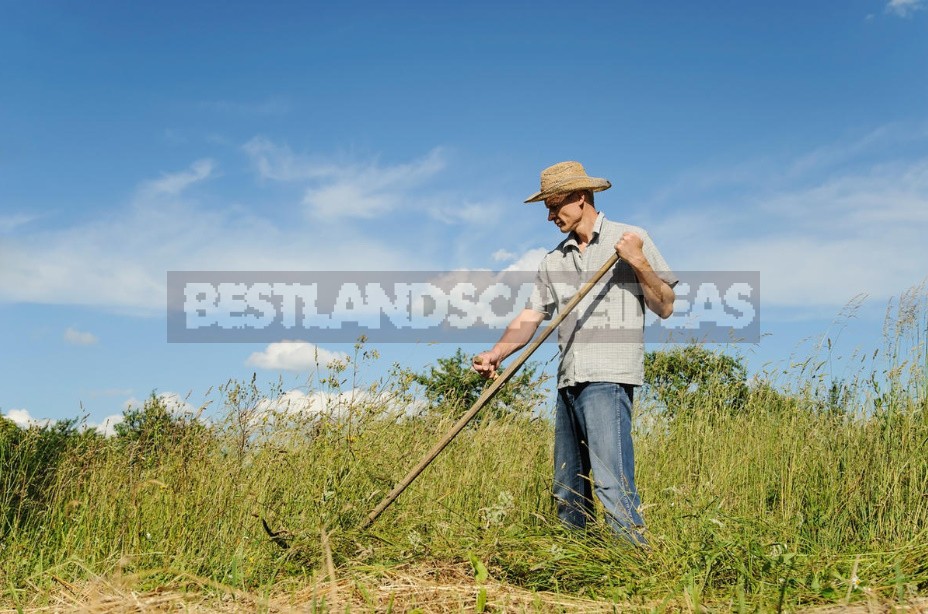 A small handle is made in the middle part of the body for easier holding of the tool. Its position depends on the growth of the mower. Usually the handle is movable and can be fixed at different heights. In Europe, the handle is often fixed permanently, and in addition, there is an additional handle at the top. Currently on sale products with the metal snath, a knife is attached with screws.

There are two types of braids. Both of these tools are equipped with shorter blades than the usual one. It also has a shorter stalk (only about 1 m) and no additional handles.

In fact, both of these varieties are variations of the braid with a short and curved handle. The streamer is used for cutting down bushes and other obstacles. Previously, it was used for mowing grass for animals “for now”, around the house, to set the cattle feed in the evening. 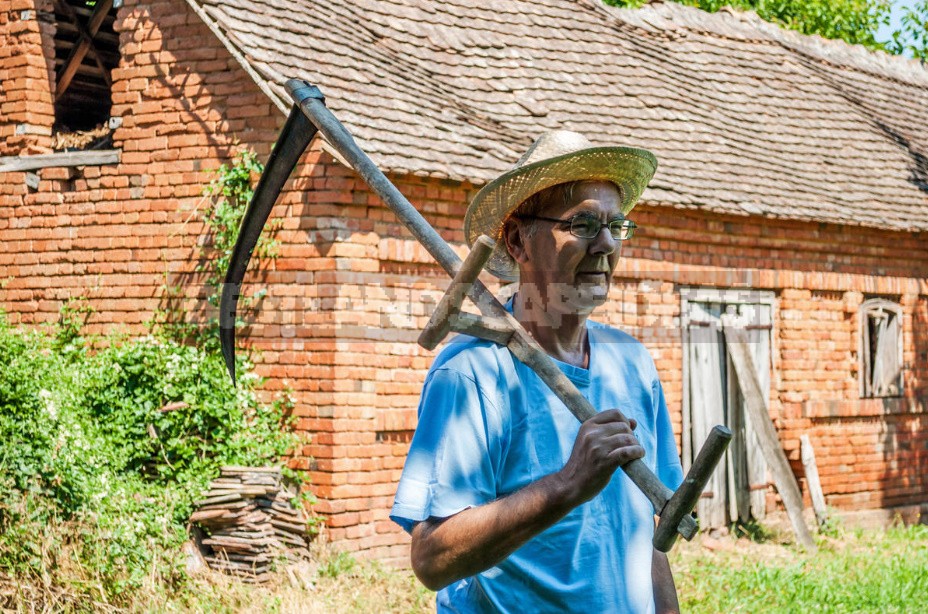 The scythes can also be attributed to the machete. In our time, this large knife (often with a curved end) is most often perceived as a weapon — at least in Europe and America. And it wasn’t invented to deal with the walking dead or just bad guys, of course. 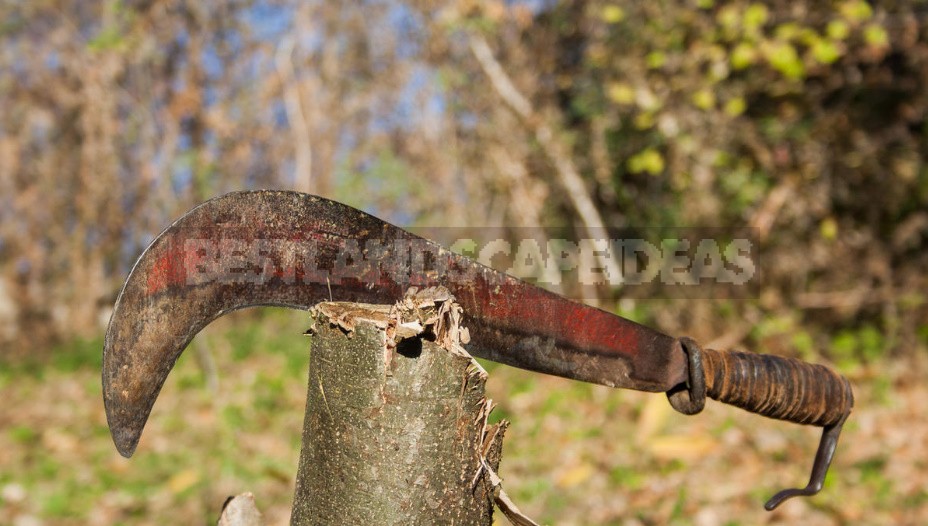 In tropical countries, machetes are used for harvesting crops such as sugar cane. It is also suitable for clearing areas of lush jungle vegetation. 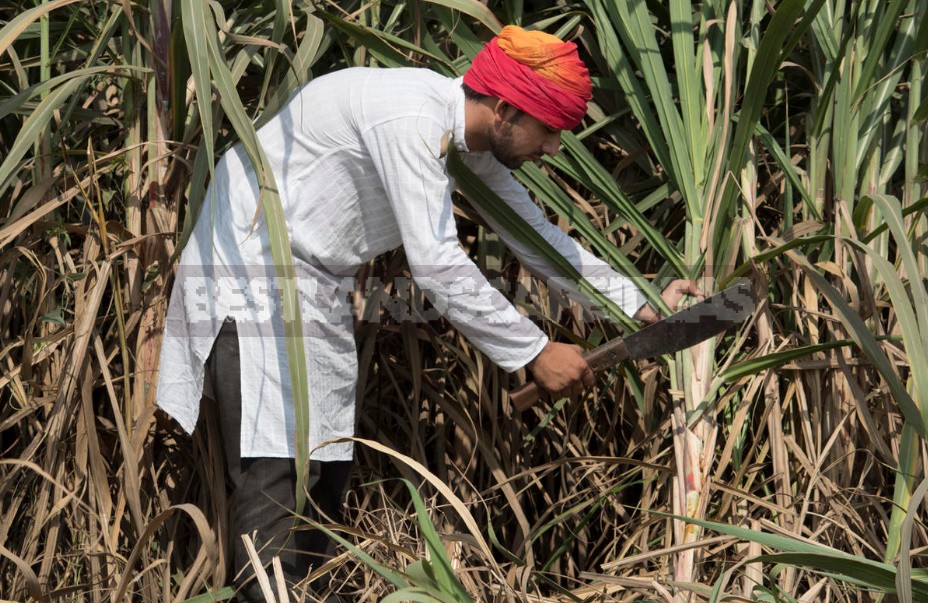 Here is such a complicated history of the scythe turned out. Does your farm have this tool? Share your experience using it in the comments.