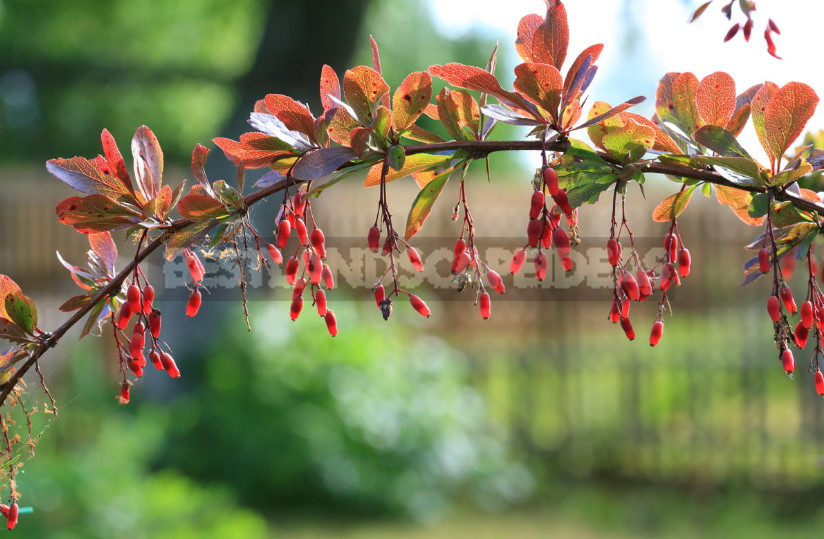 I did not set out to collect a collection of these plants, but after a few visits to shopping centers found that I have it already “wound up”. And want new revenues.

Of particular interest to me has always been the evergreen, despite the existing prejudice about them: many believe that these plants are not winter hardy. 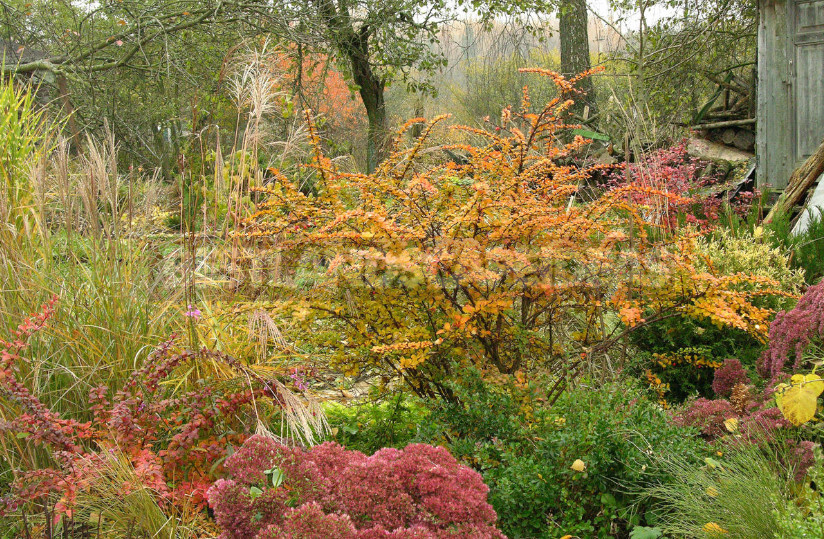 The types and varieties of evergreen Berberis

The oldest in my collection is Berberis buxifolia ‘Nana’, which in 15 years has turned into a lush Bush up to 40 cm tall. A very dense plant with small leaves bearing a thorn at the end, practically does not bloom, but a neat figure atones for this disadvantage. It is considered the most winter-hardy, but as it turned out, other evergreen, which had to face, no worse. The only condition: to be stored completely, the branches of plant should not protrude above the snow, so they never reach the required size. 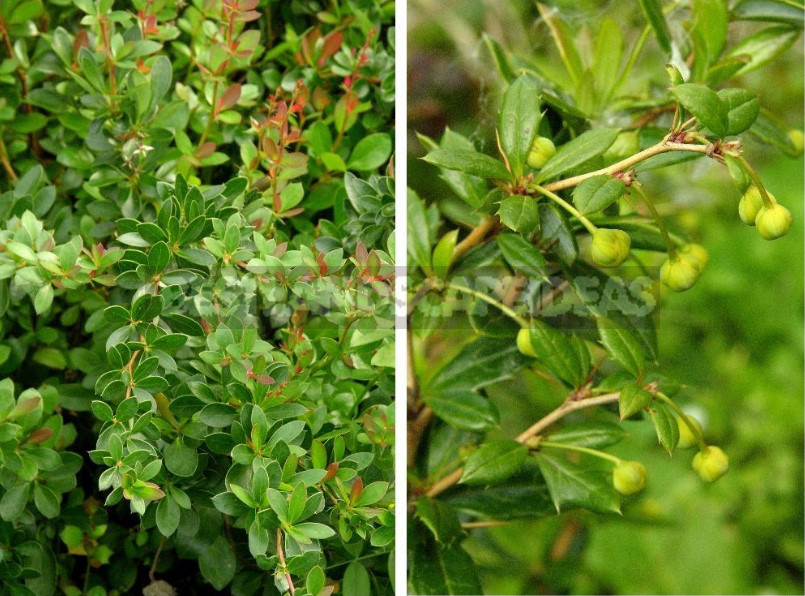 B. verruculosa – shiny pure green, very bright plant, only too aggressive: long triple thorns prevent all sorts of liberties in circulation. Armed with several spines and a rigid oval leaves on a white lining. Sometimes he tries to bloom, although it never came to fruit. 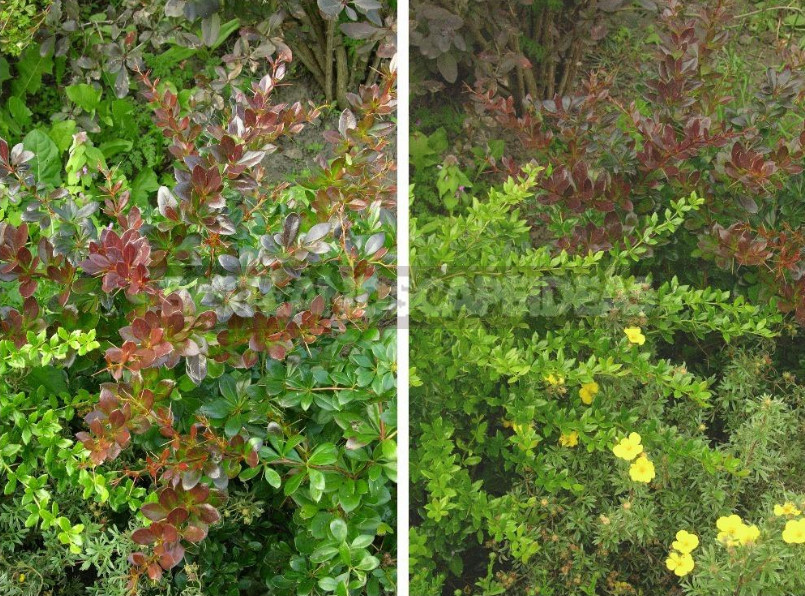 A similar form of Bush in B. x media, represented by the variety ‘Red Jewel’ – with “metal” leaves in the shape of a diamond, serrated at the edges. Young leaves of this variety are the colour of copper; they can fly around in the winter, but before it is again time to blush. Flowering was not noticed.

B. julianae is considered evergreen, although its relatively large (up to 6 cm) leaves with bristles on the edge can not tolerate cold winters, acquire purple and plum tones and fall off. 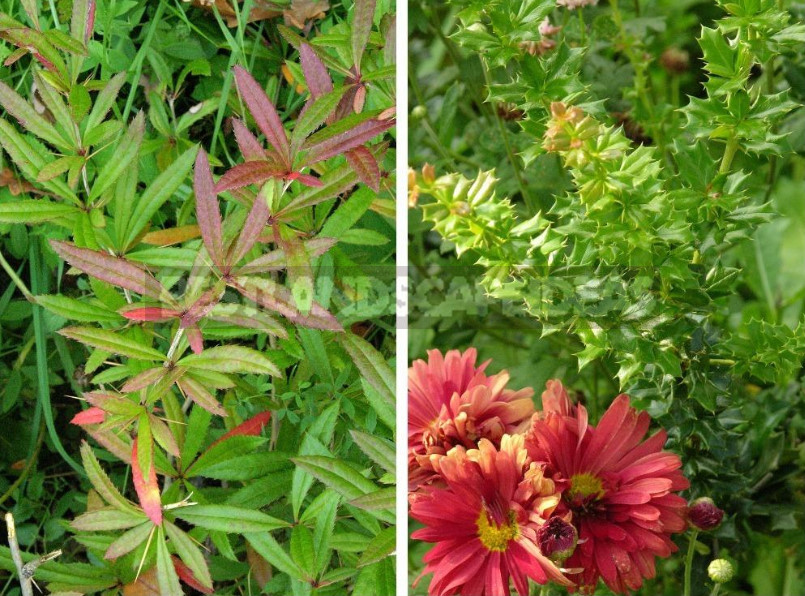 The most unusual in the collection – grade B. x lologensis ‘Mystery Fire’ with rough protruding branches. They are seated with hard tin leaves with 3-5 notches, which presents some problem when it has to be bent down for the winter. This variety should bloom profusely. Unfortunately, it was possible to see only some moments of the process – buds and green berries, the culmination of each year is missed. 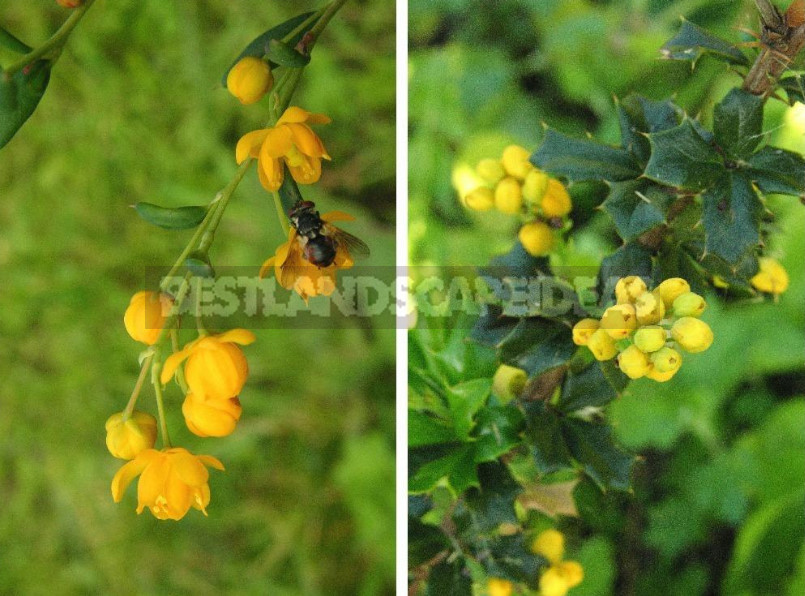 One hybrid, B. x stenophyllus is extremely rich in varieties, and one of them recently came to live with us. The already narrow leaves with a thorn at the end have wrapped edges, which makes them look like needles. Once from the store to the garden, he bloomed with joy at the wrong time. The result is an orange-yellow flowers are somewhat disappointed: there was hope in the red.

Varieties of deciduous Berberis and their features

Now about deciduous barberry trees. Of course, this is primarily some of the motley company varieties B. thunbergii. They are very diverse in appearance. 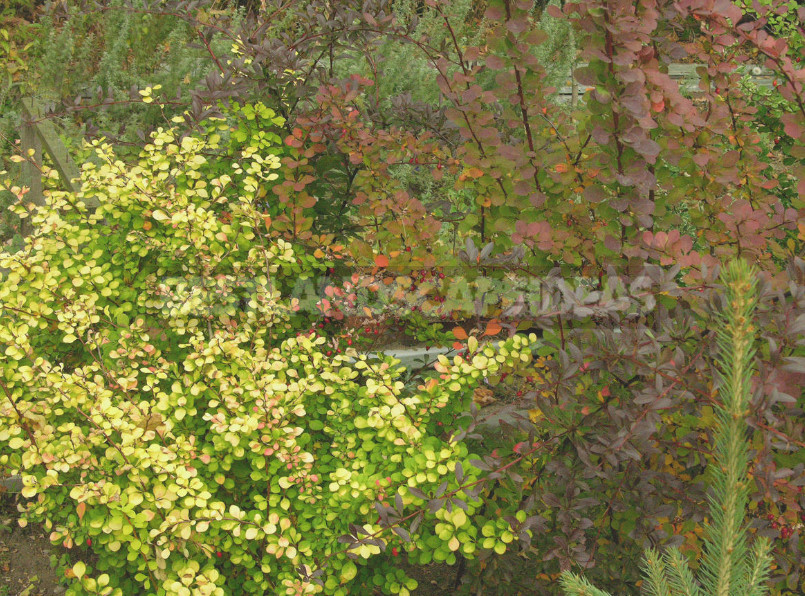 The usual shape and size of the Bush

From green good ‘Green Ornament’. In General, it is directed upwards, reaching 1.5 m, but the side branches are stretched horizontally. Gently leafy, smooth and flashy colored summer, autumn – orange-yellow. The descriptions should bear fruit abundantly, but does not. Still deserves high praise. 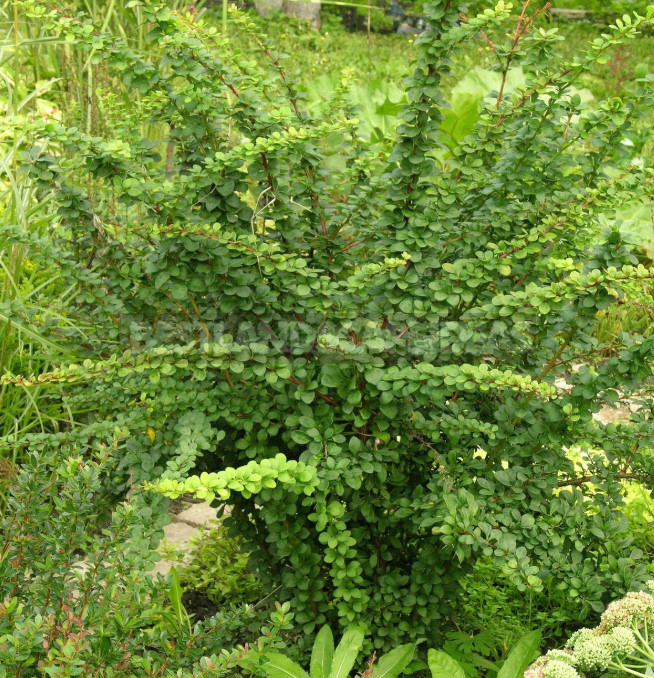 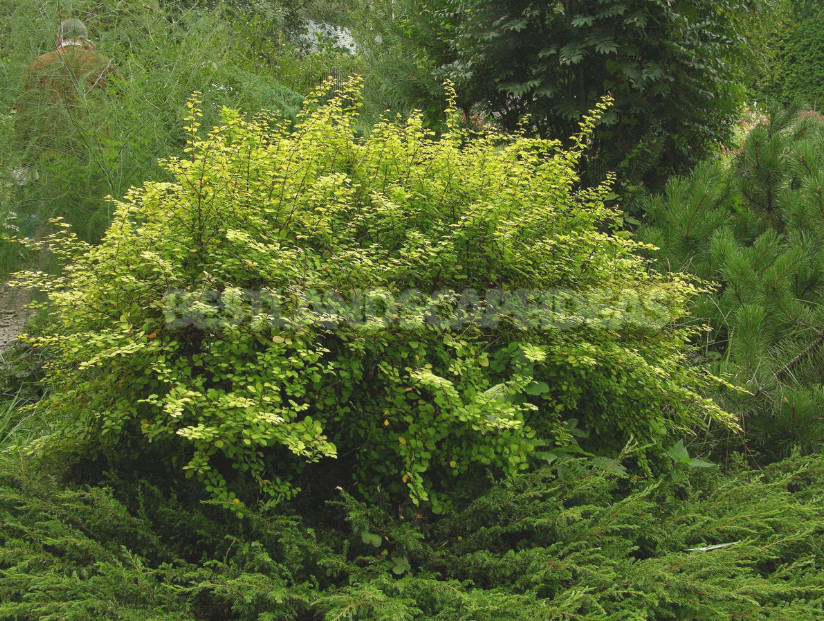 Even more ancient ‘Silver Beauty’ with white-mottled growth was better than the vaunted ‘Kelleriis’. Although Dutch novelty indeed more powerful, but the color is unstable and if there is, then by mid-summer. 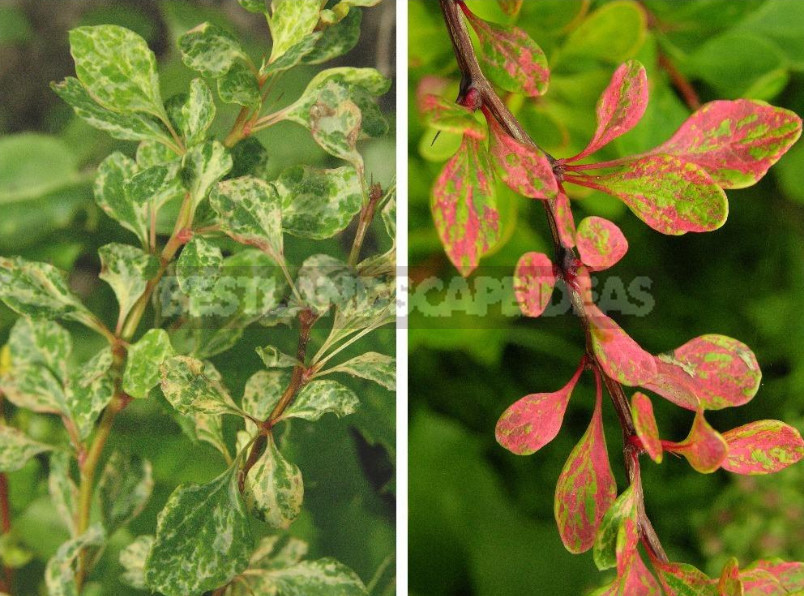 On purple background white, gray and pink splashes of different shades – usually it’s ‘Pink Queen’ or ‘Rose Glow’. The first is considered better – the specks are smaller and clearer, but really it’s hard to tell. 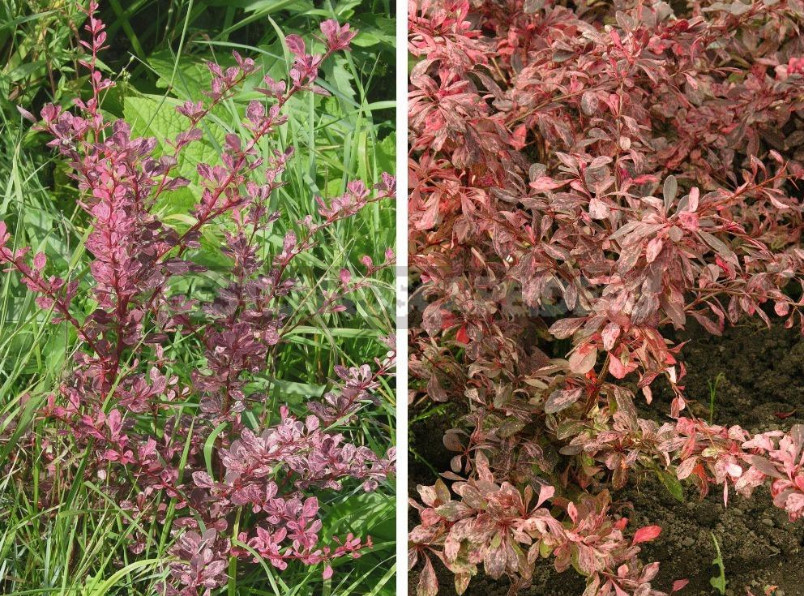 For those who prefer a chaotic variegated strict geometry, derived ‘Golden Ring’ — sort of medium size and weight. It is easily recognizable by round beet leaves bordered by a narrow yellow, greenish or pink (autumn) border. 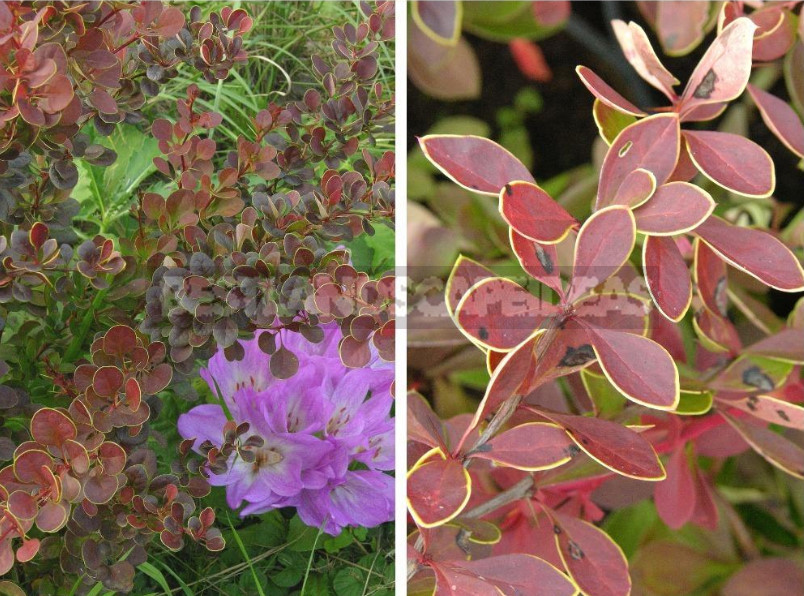 The same coloring in ‘Coronita’, but it has a prostrate shape and large pointed leaves.

Dwarf varieties no larger than cabbage and the same dense

Dark green ‘Kobold’ is decorated with bright light growth. The true variety should turn yellow and red in autumn. Ours is still green, but if it’s not ‘Kobold’, what is it? 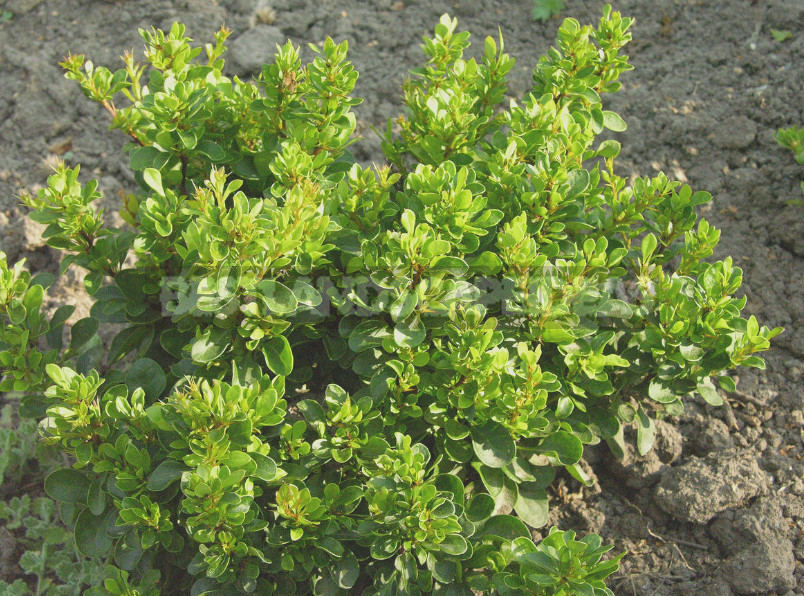 ‘Atropurpurea Nana’ has a crimson growth on a purple background. It is believed that it can hold almost up to a meter high, but it seems to me that in 5 years it has not increased. 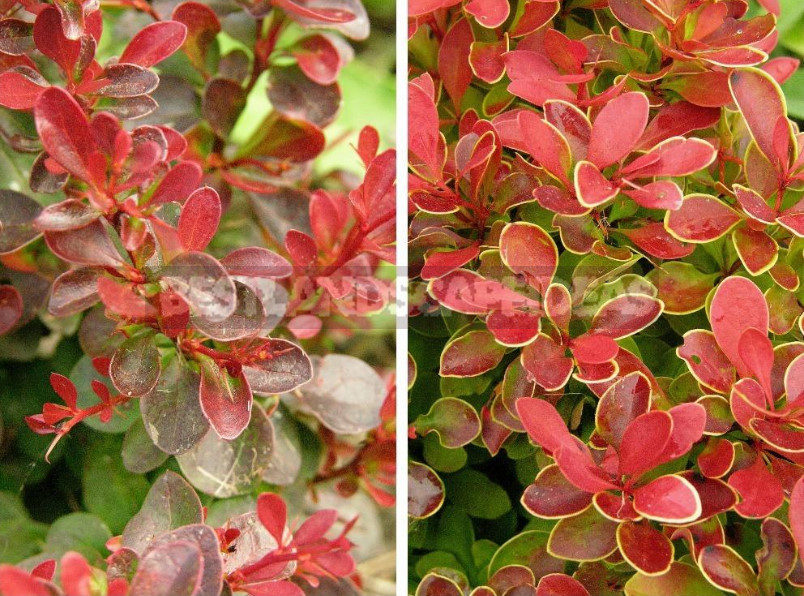 In this company is particularly admirable Burgundy ‘Admission’ with bright red young leaves in a yellow border. 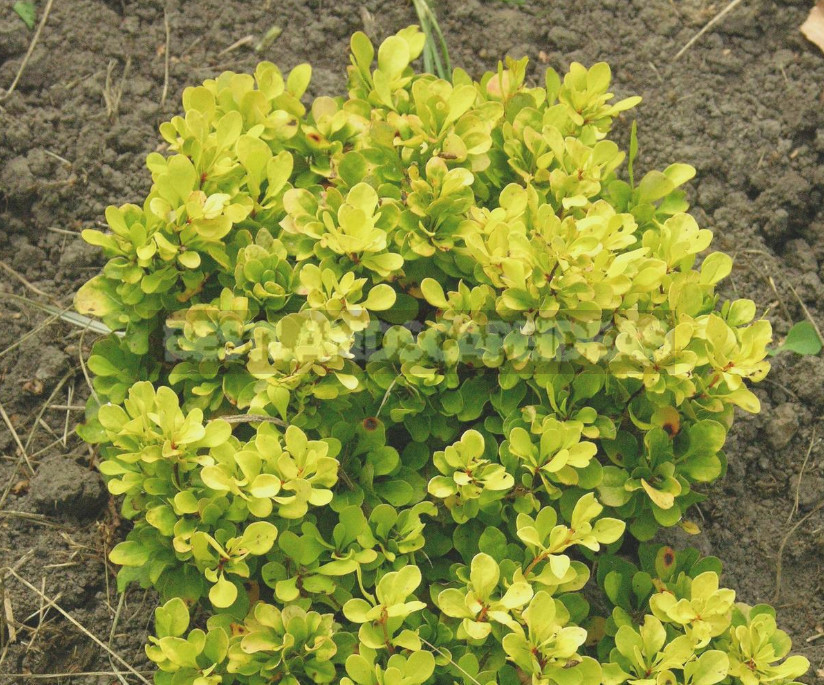 Yellow “head” we call ‘Bonanza Gold’. In autumn it is slightly browned, but no more.

Very clear variety ‘Erecta’, fresh green in summer, bright orange in autumn. As they say, can grow more than 2 m, so we are waiting. “Columns” and “missiles” of all colors – it’s ‘Erecta’, dressed in a variety of outfits: yellow, Burgundy, colorful. 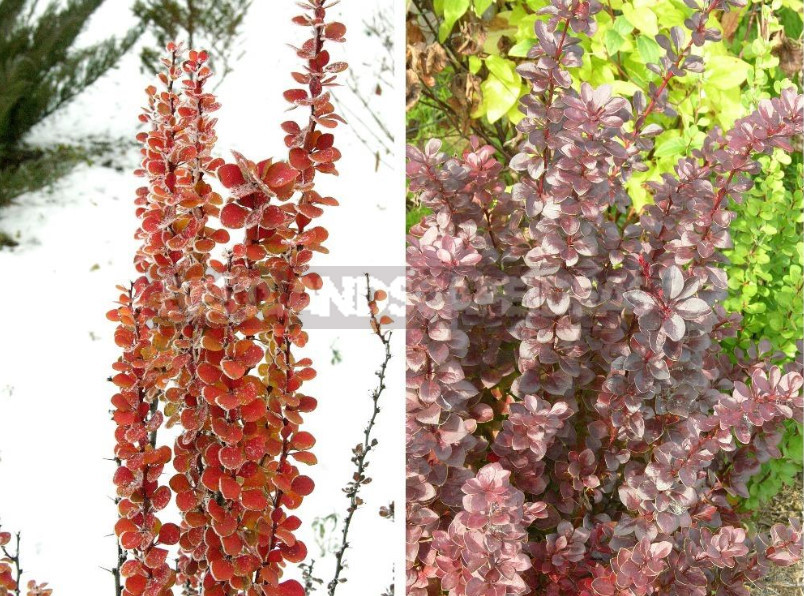 Among them ‘Helmond Pillar’ – up to 1.5 m tall, reddish-purple in summer and red in autumn. 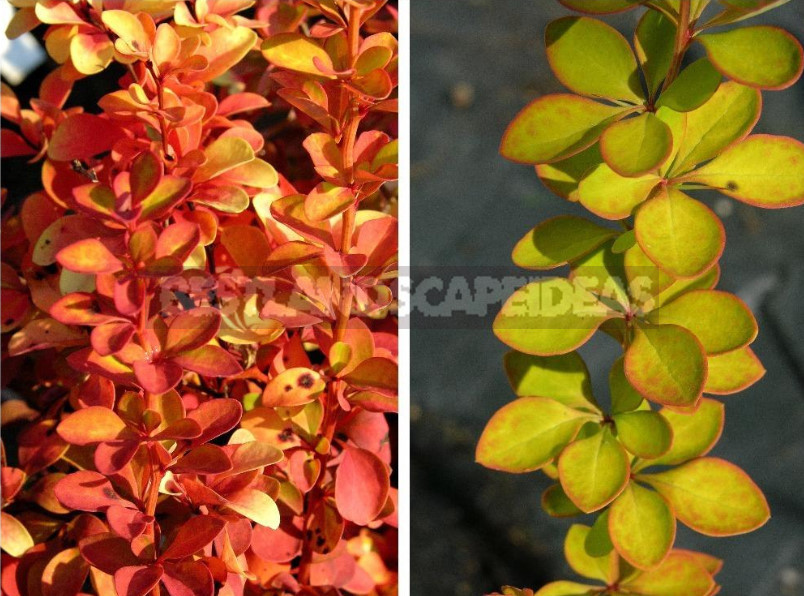 Presented in the collection and some other species. B. koreana in the form of varieties ‘Red Tears’. 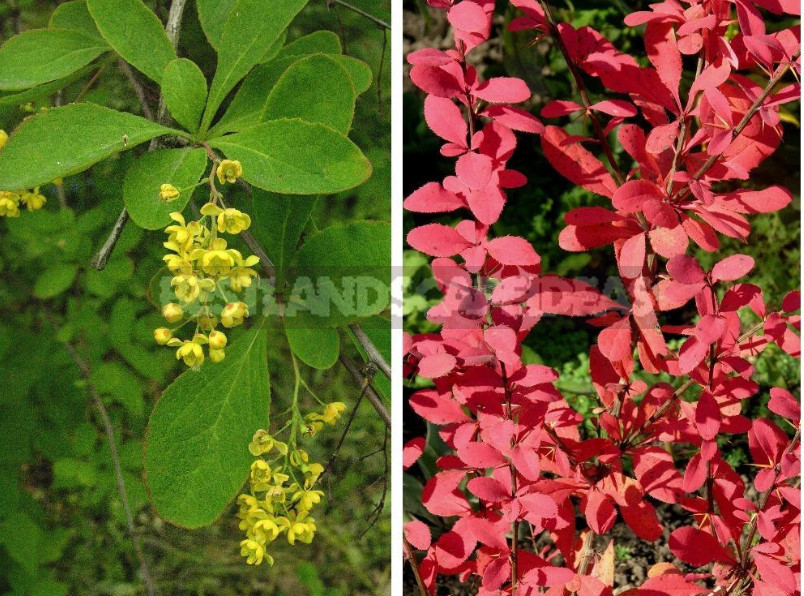 The ever-healthy ‘Silver Miles’ is the most interesting sort of Berberis × ottawensis. The changeable color of this large Bush is difficult to describe, the overall impression: silver-gray plaque and white strokes on the beet background.

In General, get at least one barberry, and then it will be difficult to stop.

Landscape Design with Their Hands: the First Stage
The Advantages of Natural Tile
Landscape Stone in the Garden: How to Do Well, Not Just "Fashionable"
Top 10 Ideas of Unusual Garden Gates