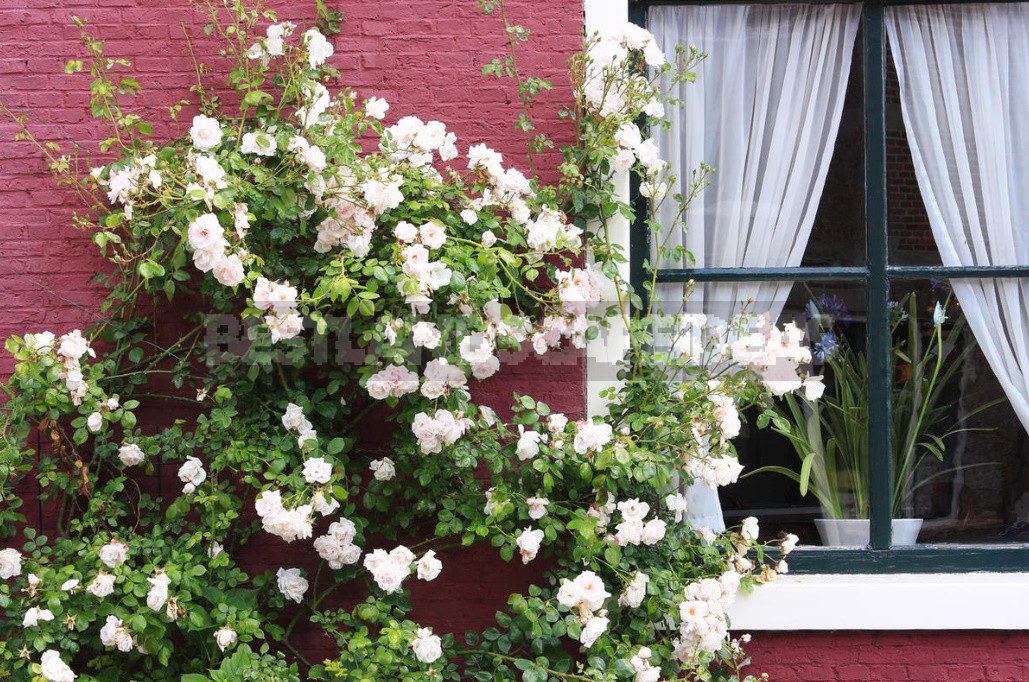 Wattle roses, which will be discussed, without exaggeration can be considered a great decoration of the garden. Their role in vertical gardening is difficult to overestimate. The abundant flowering, the grace of the plaits that entwine the supports, and the openwork of the inflorescences can be compared with little else.

Such a plant is planted even in a single instance, it is easy to make your garden unique. At the same time, climbing roses are almost universal, and everywhere they will be good: on a pergola, column or arch, on an obelisk or a stone wall. 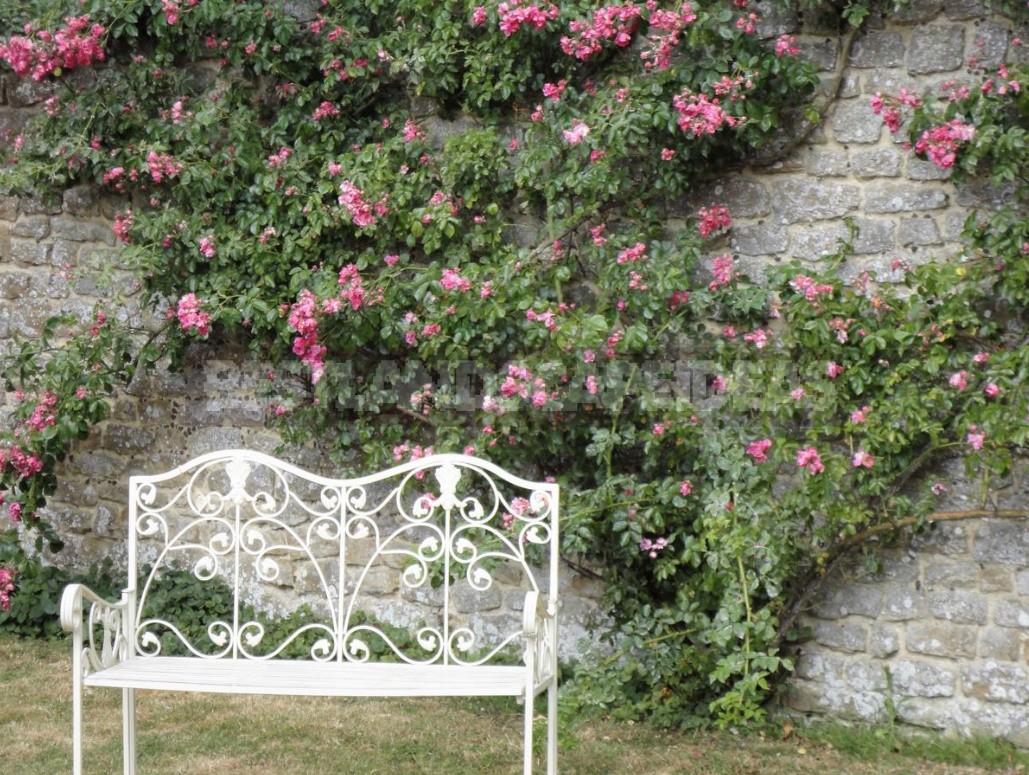 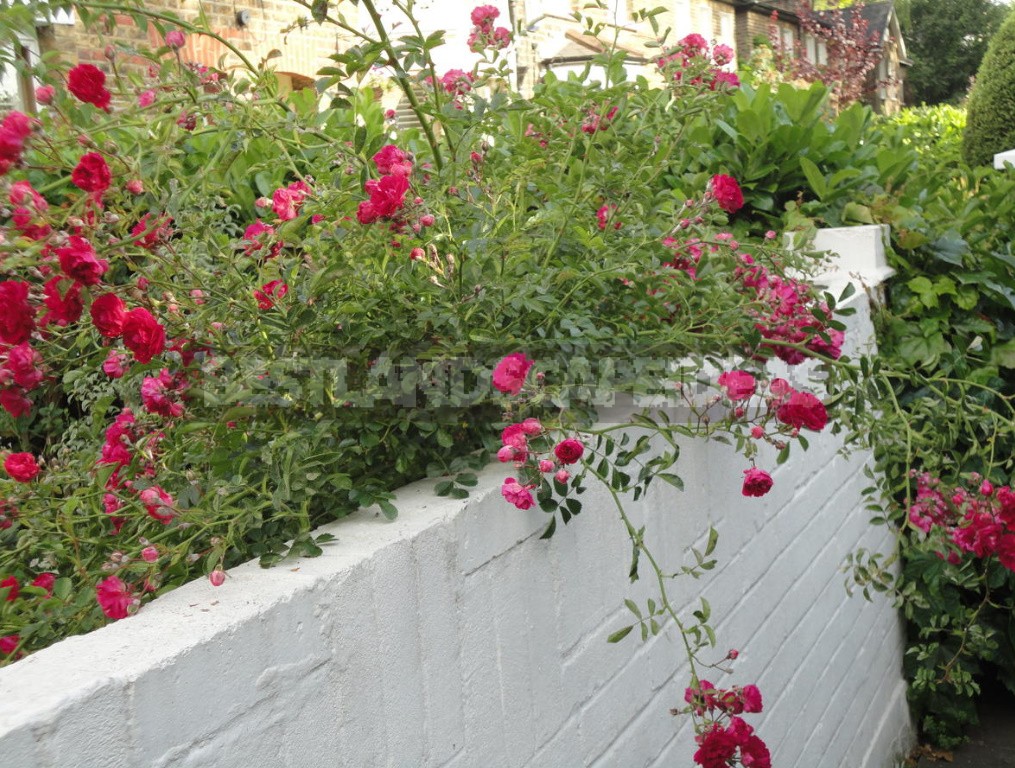 Especially appropriate are wattled roses, as it may sound paradoxical, in a small garden. When landing, they take up very little space, so even on our standard 6 acres will not interfere with anyone. They also “face” a small garden at the townhouse, where in General it is impossible to walk around. If you are not able to afford a large rose garden, do not worry: there is a very simple solution — plant a climbing rose. 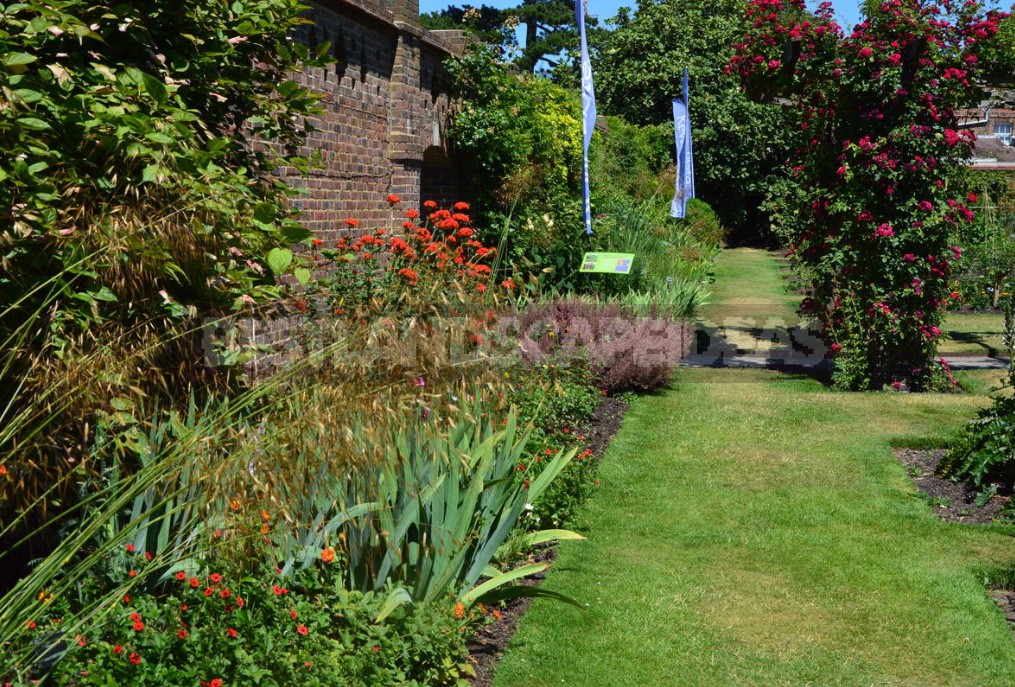 You will kill several hares at once: solve the problem of decorative decoration of the garden when there is a shortage of space-this is once; just 1 luxuriously blooming rose will replace you with a dozen others – this is two; with the right choice of varieties, such a rose that blooms all season, will decorate your modest plot. Finally, it is undoubtedly much easier to care for it than for all the others combined. After all, it is much easier to “feed” and water one solitary plant than a large rose garden. And shelter in winter, too. Therefore, do not be afraid of seeming “extra” troubles that may initially frighten an inexperienced gardener. 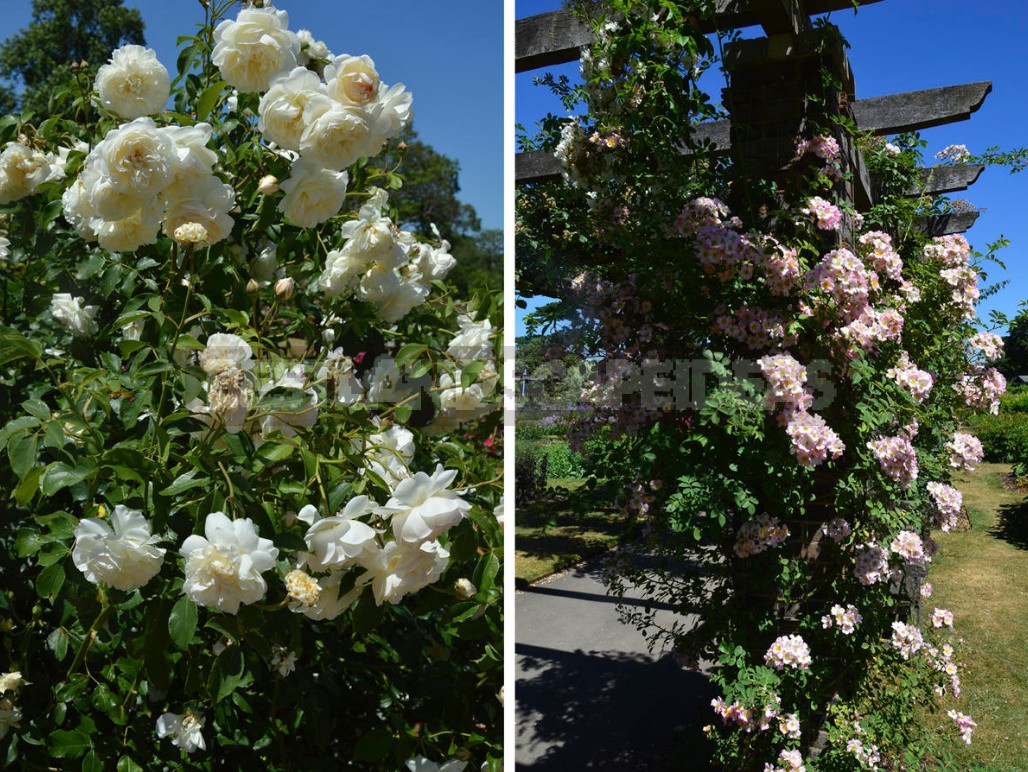 As you know, climbing roses are divided into 2 large groups: so-called Ramblers and climbers.

READ  How To Plant And Care For Lilac 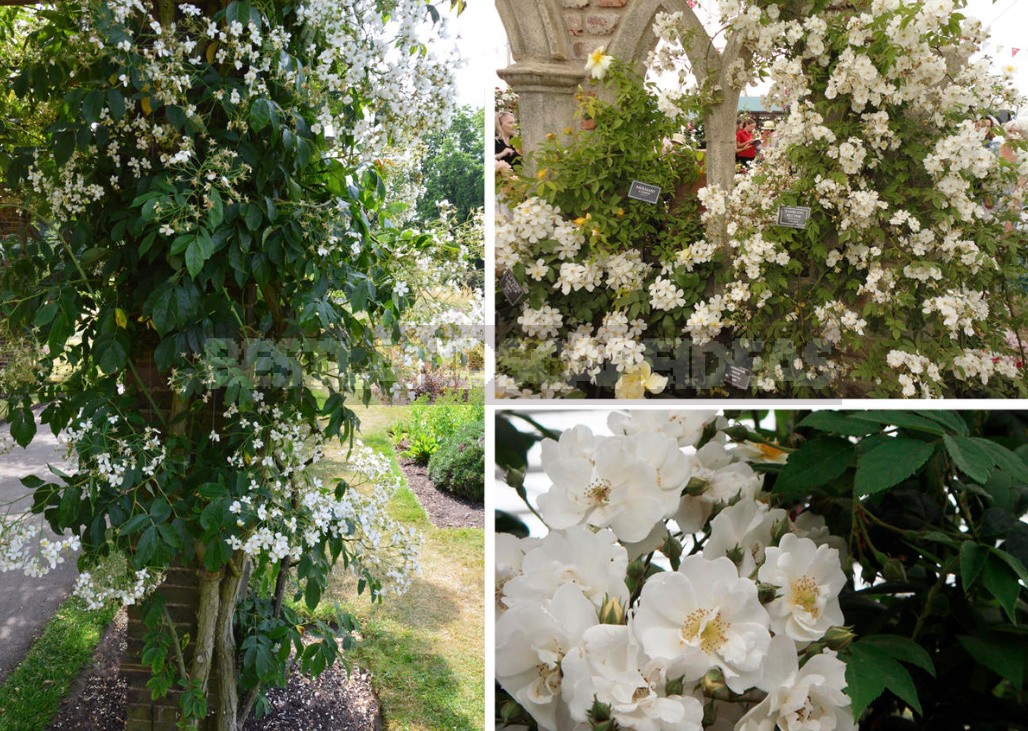 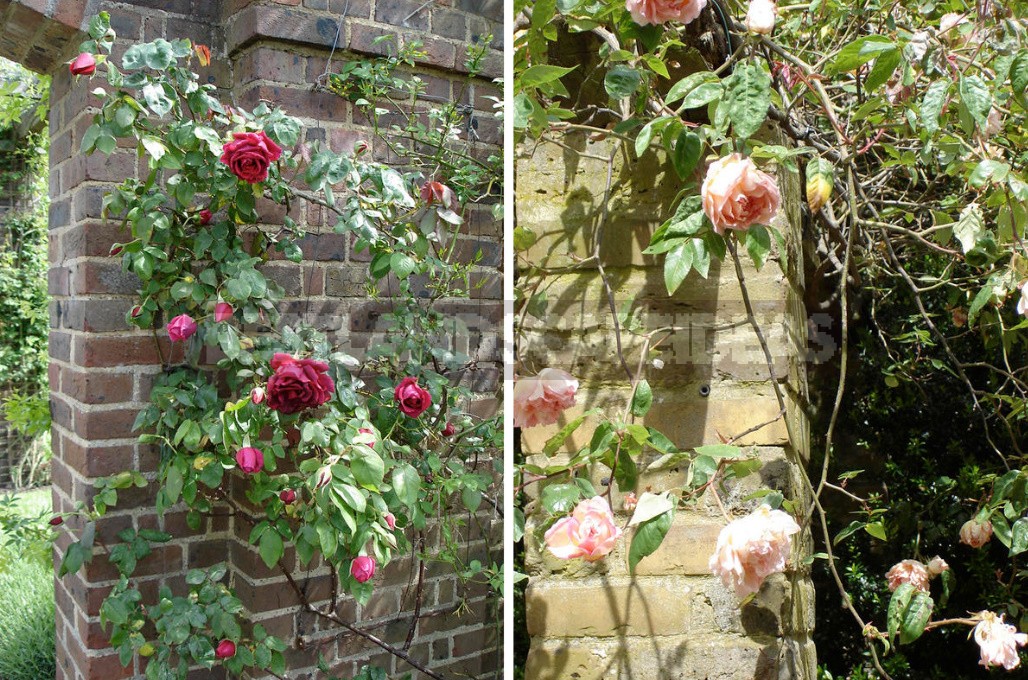 Relatively new varieties, United in a separate group — Hybrid Kordesii, obtained from the crossing of R. rugosa and R. wichurana, can also be grown as wattles. They have long wattle-like shoots (up to 2.5 m), large flowers of various colors, bloom profusely all summer from June to late autumn. They are unpretentious and hardy, although they need shelter, tolerate partial shade, and are resistant to diseases. Representatives of this group can also be used in vertical gardening of the garden — no worse than the classic wattle varieties. This is, for example, dark red velvety ‘Sympathy’, creamy white ‘Ilse Krohn Superior’. 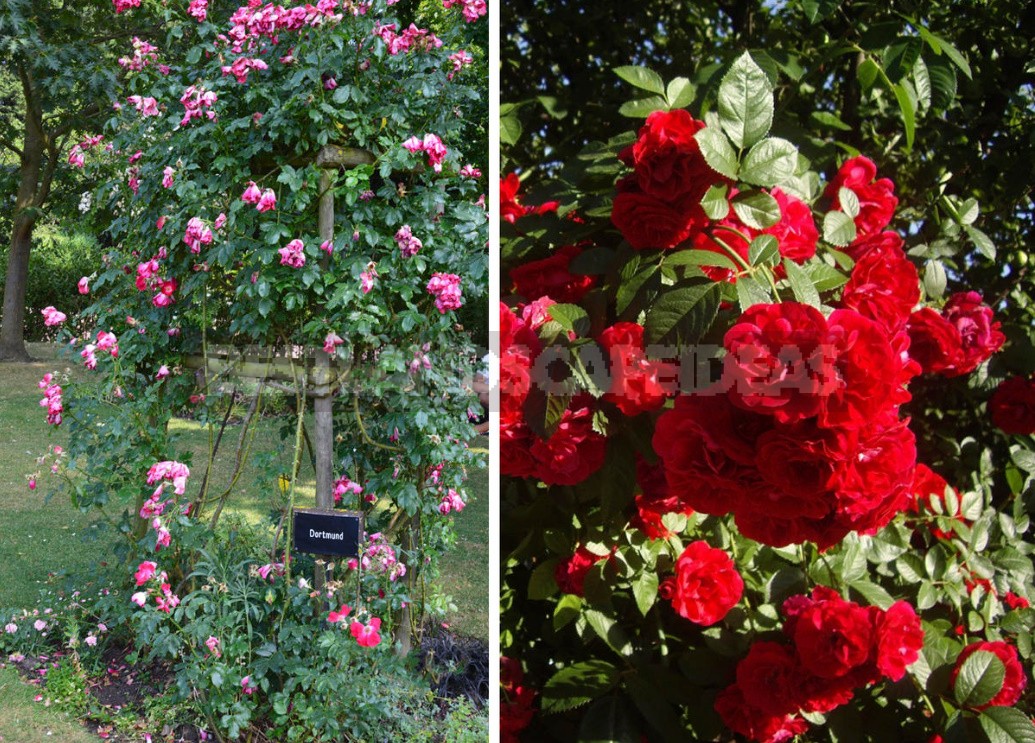 What group your wattle rose belongs to determines the options for its use in the garden. Any structure of the so-called small forms-an arch, gazebo or pergola, covered with Rambler roses, is a delightful sight. A wattled rose can also show off on its own, causing the enthusiastic exclamations of neighbors. It is only necessary to provide reliable props, as these roses are able to grow into powerful plants. 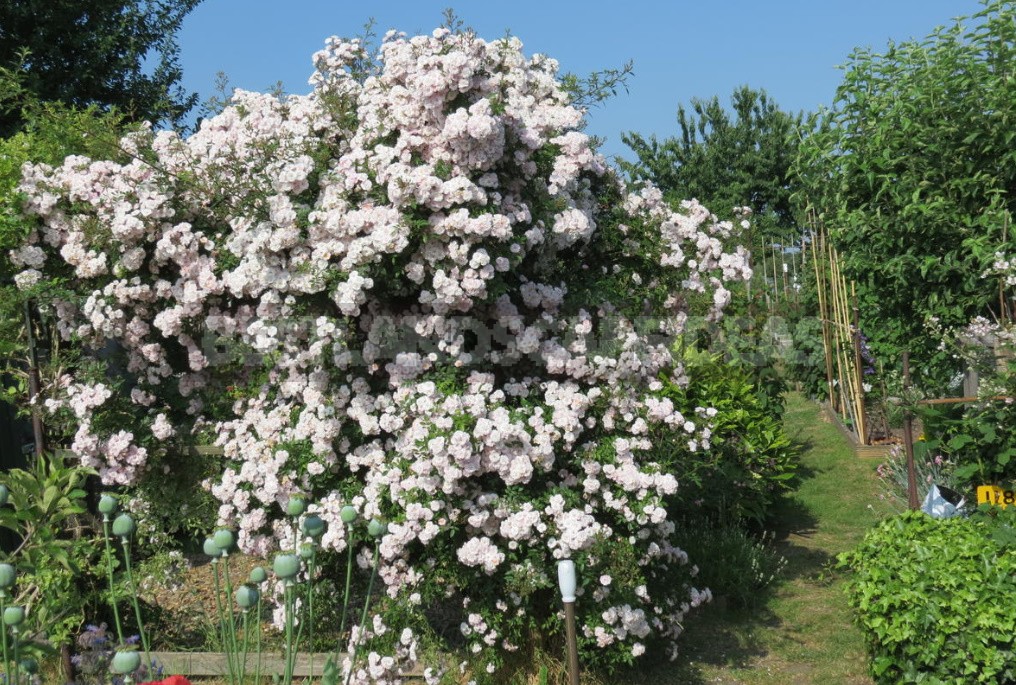 Small – flowered varieties are suitable for pergolas and columns, large-flowered climbers are suitable for lattices and walls. Their ability to decorate the walls of buildings is an exceptionally valuable quality. 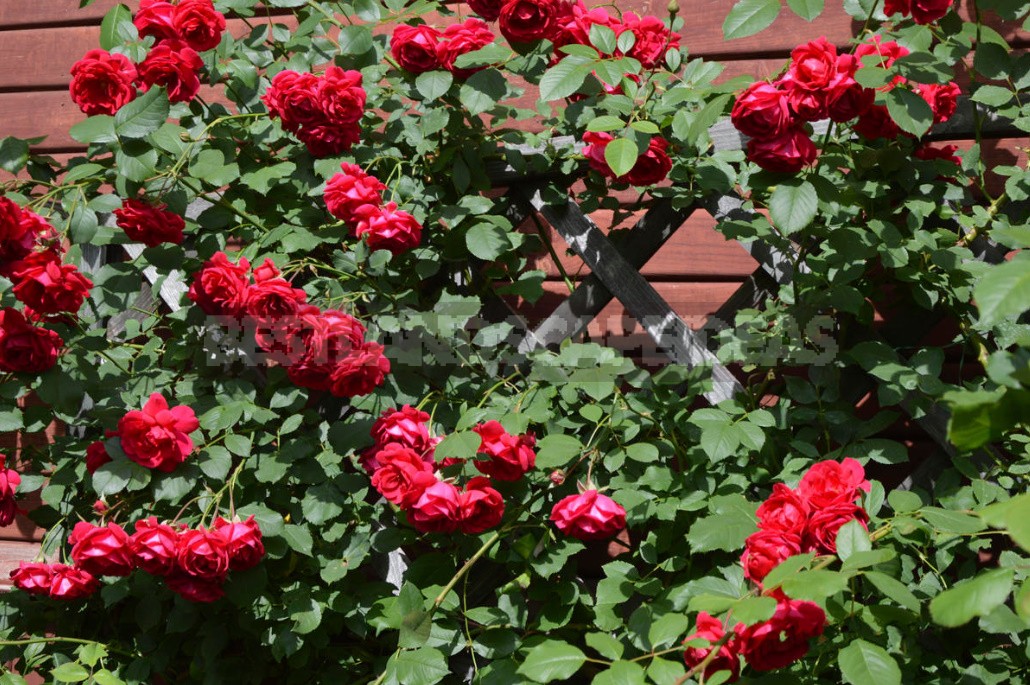 Wall decoration is a fairly common technique, often found, for example, in English front gardens. Only they have these roses there no one removes from the support and does not hide for the winter, as in the mild English climate this is not necessary. They grow on the support for years. We were not so lucky; the wattled varieties have to be removed and sheltered for the winter. 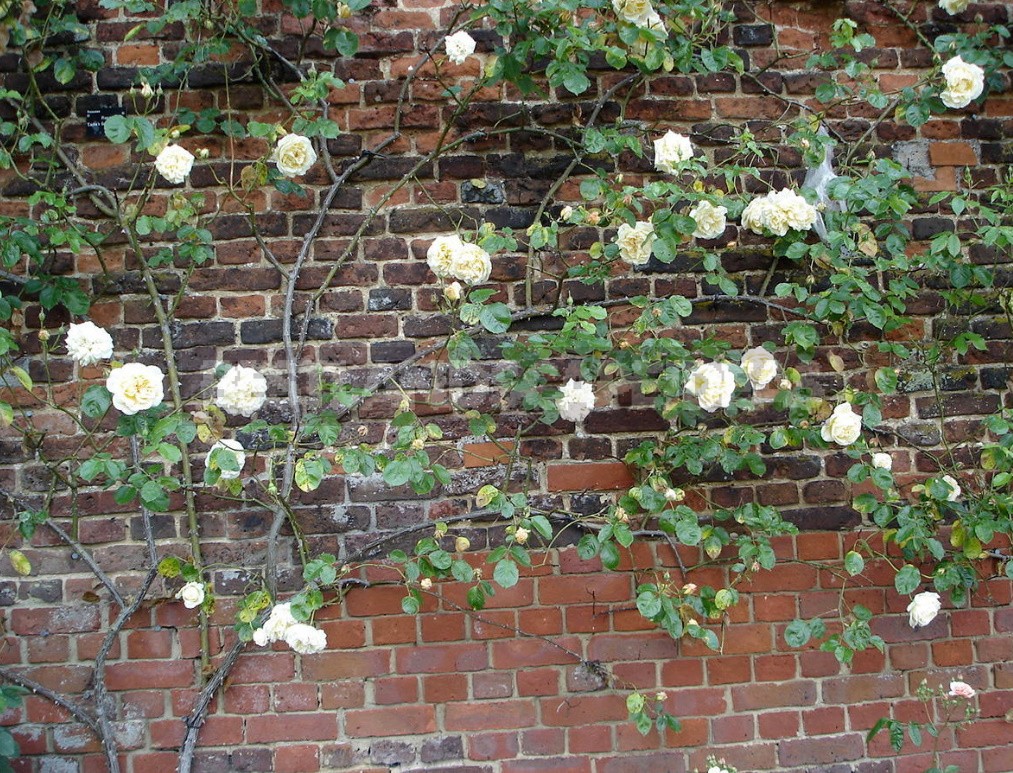 Another option for landing involves installing an arch, which must necessarily be capital-welded, made of strong metal that can take on serious loads. This arch will serve you for years, unlike the “one-time” Chinese ones offered to gardeners in shopping centers. Pergola should be strong, withstanding the considerable weight of a blooming rose. 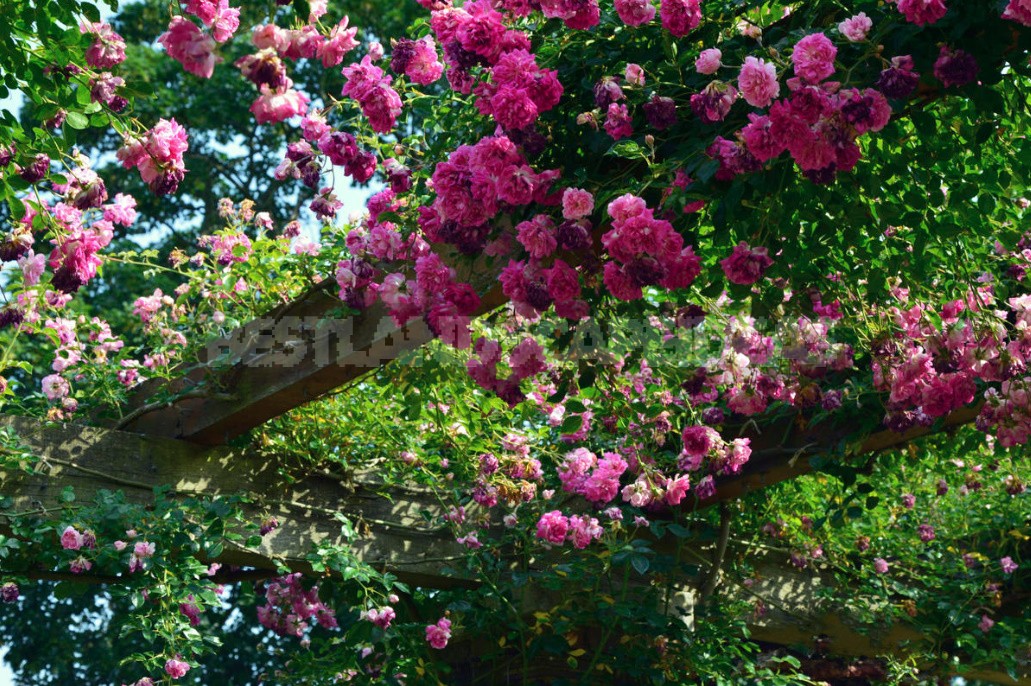 When I visited English gardens, I saw another method of placing Ramblers. They let them run along the ship’s ropes, which are attached to the pillars-supports. 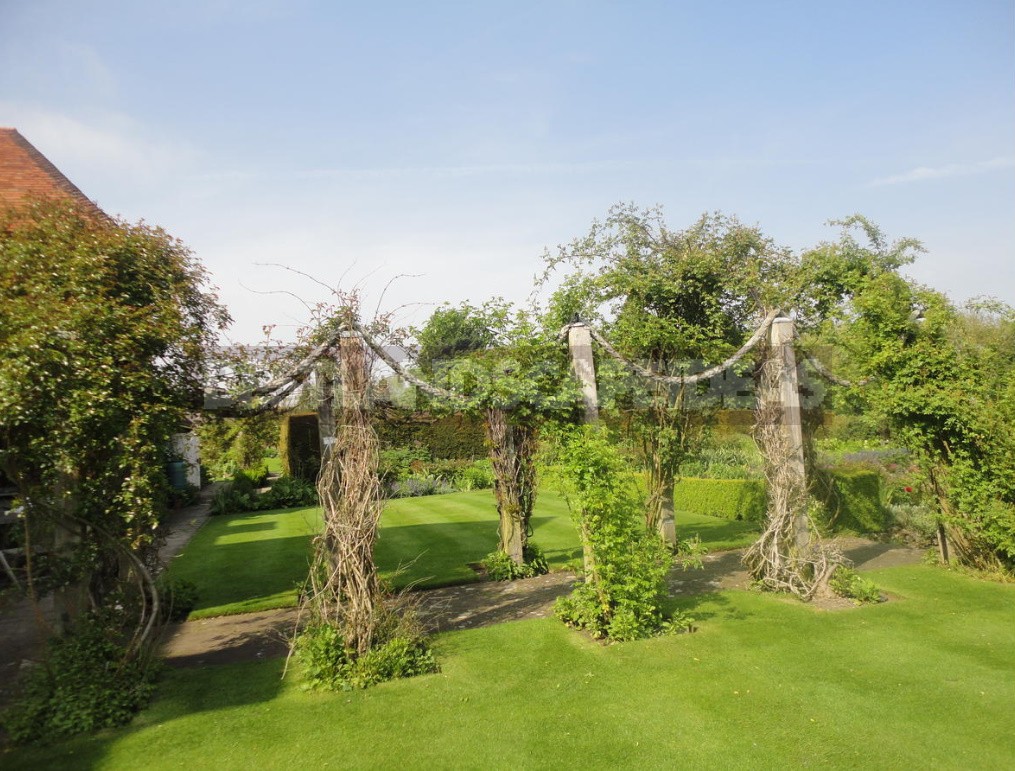 This tradition is not one hundred years old. It has been ingrained since the days when Britain was ” mistress of the seas.” Old ship ropes, which once served as rigging for sailing ships, were used in gardening practice — in private gardens and public rose gardens. 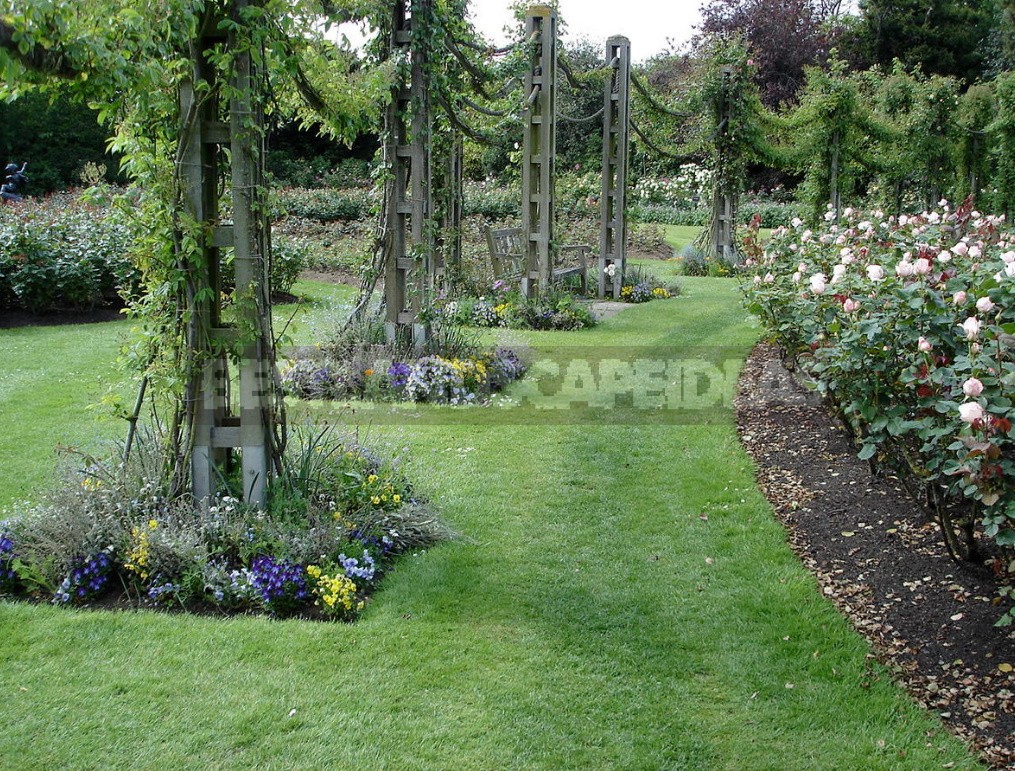 So we can build a “reverse arch” in our garden. Ropes may not be necessary if you make suspensions of strong wire or cable. These garlands of roses, among other things, can be supplemented with led lights that will highlight this beauty in the evenings.

A climbing climbing rose is also easy to wrap around a column or plait an obelisk with it. A wicker climber will look great on a trellis or screen-a lattice that separates a secluded corner of the rest, where you can install a garden swing. In such places, especially good fragrant roses. Among the novelties of recent years, the famous flavor of the large-flowered climber ‘Jasmina’ with flexible branches, decorated with cascades of heavy large inflorescences with flowers of an old form of cold lilac-pink hue. 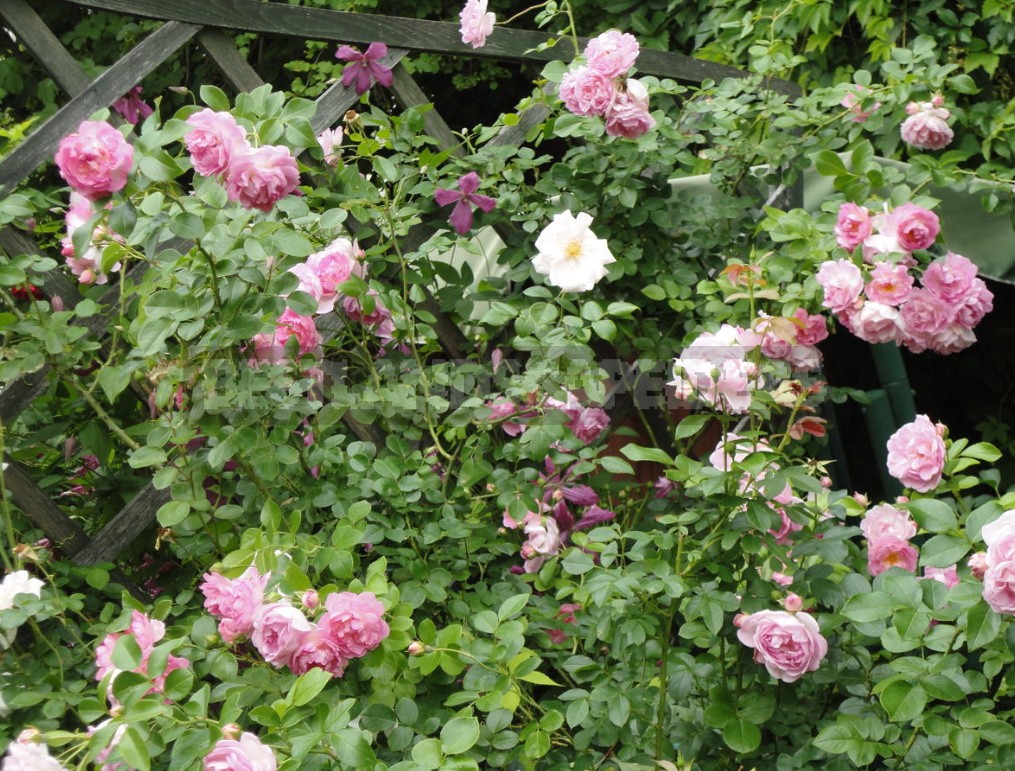 Pros and cons of Ramblers and climbers

A single Rambler bloom may seem like a drawback to someone. We all want the rose to be decorative all season. However, once-blooming roses that finish blooming by mid-summer have time to prepare well for winter. Their shoots turn woody by autumn, which has a positive effect on winter hardiness. Therefore, a single bloom can be considered as an undoubted plus, ensuring the longevity of the rose. What else is good about climbing Rambler roses? In the autumn, after the faded shoots are cut out, new young flexible and pliable lashes that will bloom next year can be rolled into a ring according to the type of nest. This saves space for hiding.

READ  What an Amazing it is, This Dodecatheon 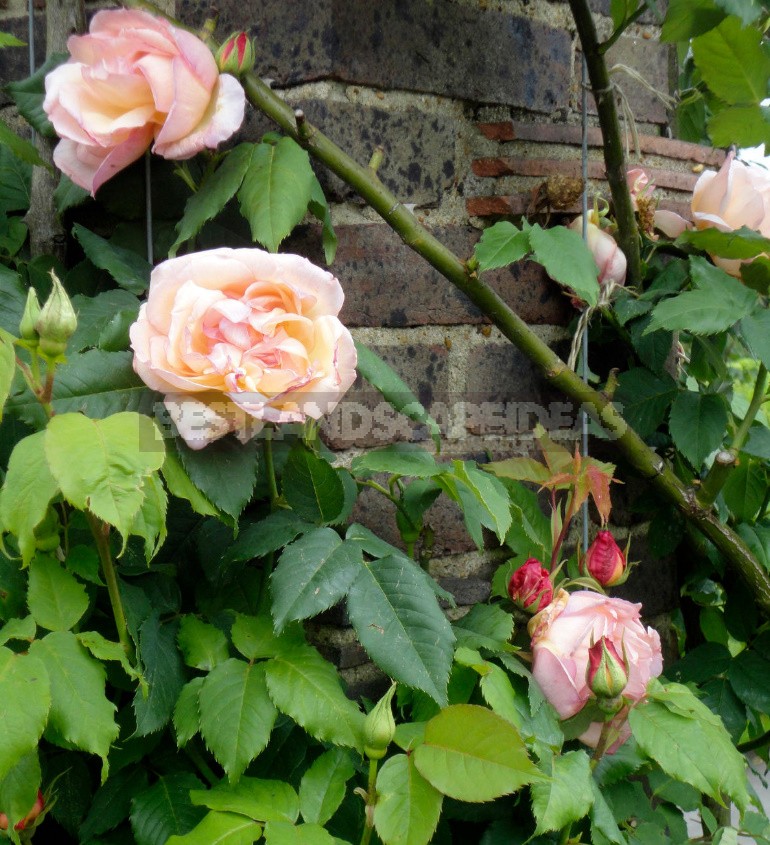 Large-flowered climbers, of course, surpass Ramblers with a variety of varieties. But they have stiff branches that are very difficult to bend under cover, so you have to go to different tricks: bend in several steps, often cut low if nothing happens. Their use in vertical gardening is also limited only to vertical planes, they can not be wrapped around a column or arch. Ramblers are more versatile.

Now about reliable and proven varieties — those over which time has no power. Many “old ladies” are already in their second hundred years, but they are still beautiful and in demand. Among the Rambler roses, ‘Excelsa’ and the oldest variety of American origin ‘Dorothy Perkins’ (1901) have long been well known. Breeders have improved the old known varieties, so there were ‘Super Excelsa’ and ‘Super Dorothy’. These grow not so powerful, but bloom continuously all summer. And almost do not get sick, unlike their progenitors, who are subject to powdery mildew. 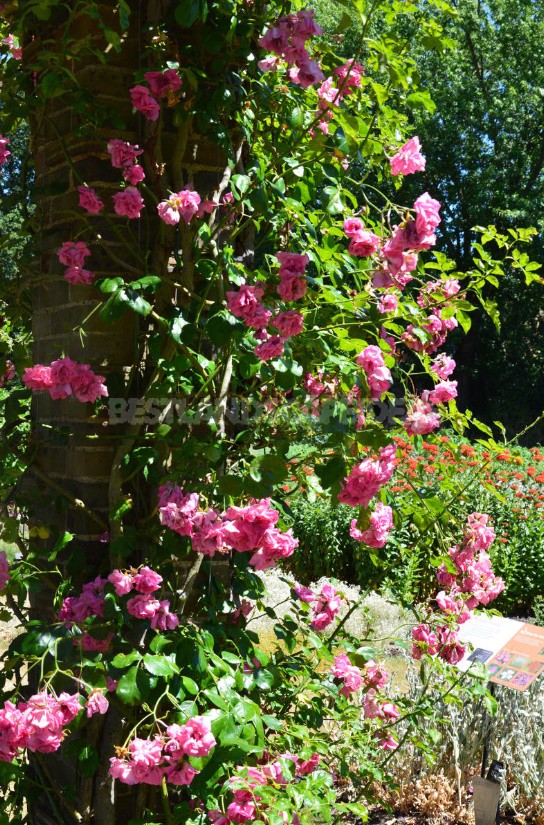 Another well-known and popular rose of American origin ‘New Dawn’ – a hybrid of the wichurana rose, can be grown as a Bush, or you can let on the grid, which is preferable, since it is very prickly and does not let you get close to it – it clings with a death grip. 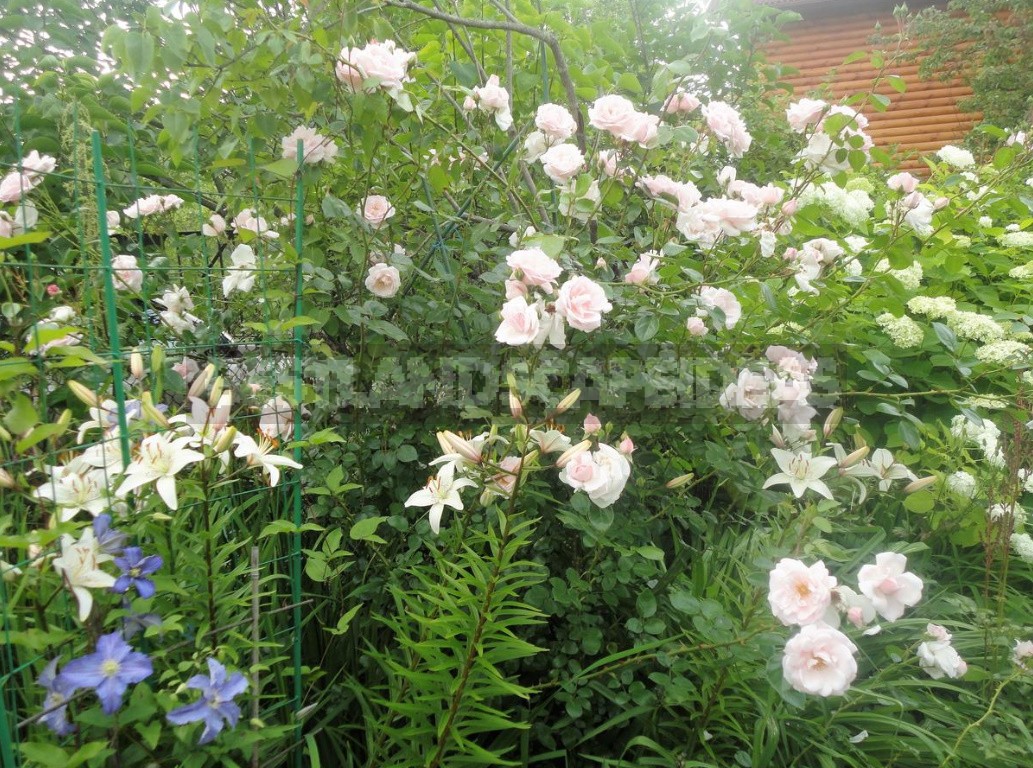 A spectacular Rambler with the telling name ‘Wedding Day’ during flowering looks like a bride in a white lace veil. The famous white small-flowered rose ‘Bobby James’ blooms in cascades of cream-white simple flowers and is famous for its strong aroma. Among the fragrant Kordes ‘roses, the curly ‘Raubritter’, obtained in the Kordes nursery in 1936, has proved itself well. It blooms profusely with lush racemes of small globular flowers of a rich pink color on the inside and silvery petals on the outside.

Currently, there is a huge selection of climbers that will effectively decorate your garden. Among the popular varieties are the following: ‘Laguna’, ‘Aloha’, ‘Parade’, ‘Lawinia’, ‘Polka’, ‘Penny Lane’. Do you have climbing roses? Share in the comments what they are, how they bloom and winter.

Plants-Doubles for Cottages: Flower Perennials
Not Like Everyone Else. Annuals With Non-Standard Appearance.
Small Bulbous Plants In The Spring Garden (Part 2)
Roses And Clematis: Possible Combinations