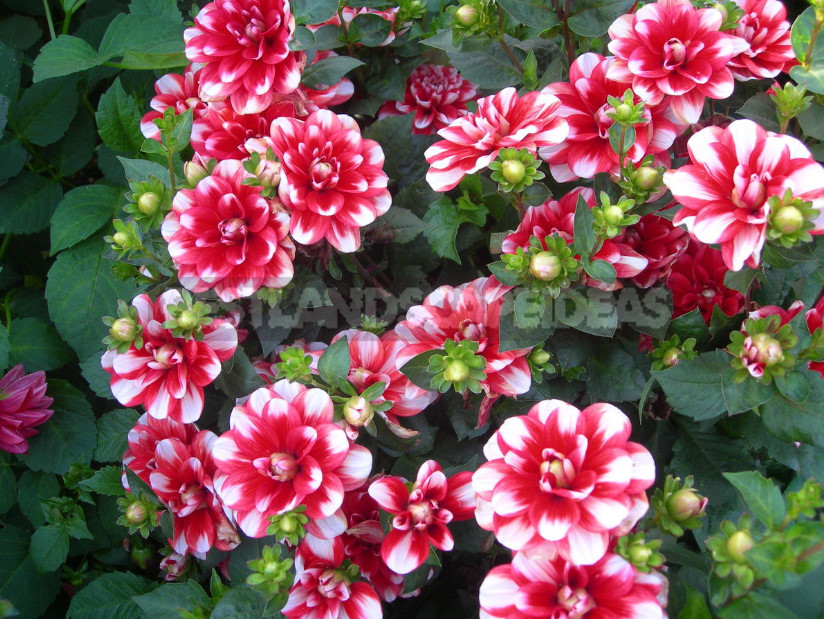 Hard to believe that the flower-lovers an ambiguous attitude. Many of them still love for the magnificent inflorescences and lush long flowering, successfully and with pleasure they are grown, without experiencing any difficulties. And someone confuse storage problems. They want the plants to bloom for a long time, and the smell was, and no care required, and most importantly – to dig up and store would not have to be.

Unfortunately, these are all dreams. Biologists have not yet found such plants, and breeders have not brought such varieties. Every culture that grows in our gardens has its advantages – for which we love them, and disadvantages – with which most of us have learned to cope.

Growing dahlias and caring for them

By and large, dahlias are not such a troublesome culture. Usual simple agricultural machinery, taking into account some biological features (love light, heat, are afraid of frosts). Planted, watered as necessary, tall varieties tied up, and even if not tied up — bloom anyway, but the view will not be very attractive. 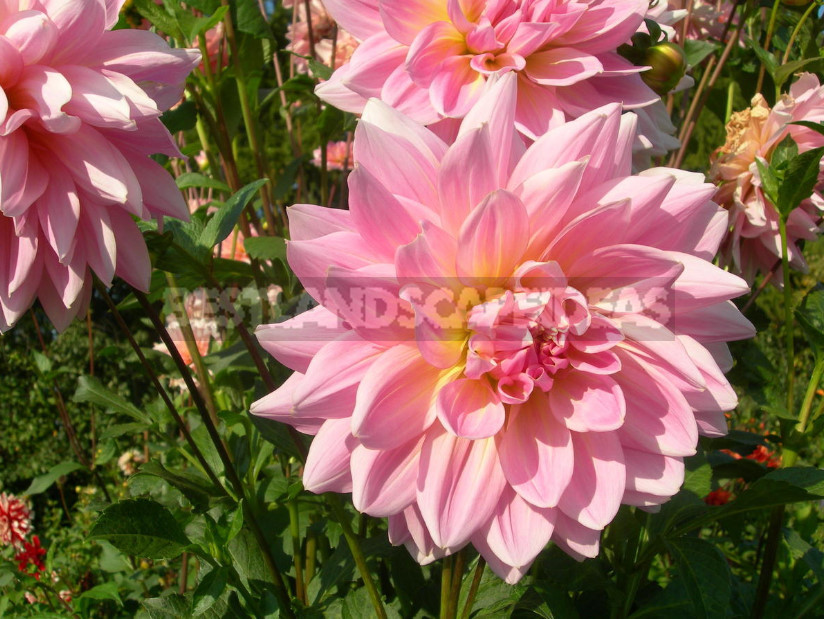 Flowering of most varieties begins in August, in the first year after planting. Some varieties of dahlias from simple, anemone, collar groups bloom in mid-July. Well, if you want to dahlias bloomed in June, you need to make a little effort and take care of it in advance: you need to sow seeds for seedlings in mid-February, and by the beginning of the summer season to plant flowering bushes in the garden.

Dahlias bloom profusely and for a long time, and the longer they bloom, the more magnificent they become. Peak flowering occurs in mid-September. By this time the bloom of all varieties. And in this time, gardeners are waiting for a disappointment – the temperature drop to negative values cause the death of delicate leaves of the dahlias, they blacken. Nonwoven covering material helps to protect them from this scourge. And if it succeeds, the dahlias can continue to bloom until stable negative temperatures. 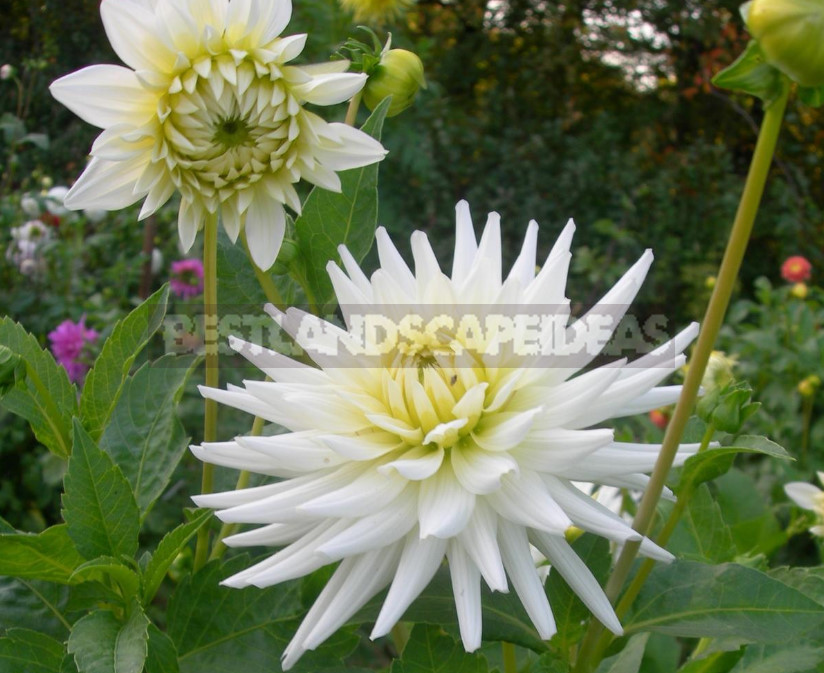 Now it is clear why dahlias are better for villagers. The same gardeners who come to the suburban areas from time to time and live there only from June to August, perhaps, and should not breed dahlias. They simply will not be able to fully enjoy their lush flowering. And quite another thing, when a person constantly lives outside the city, where the unhurried flow of life and constantly changing their appearance bright, large and small, a variety of color and shape of dahlias.

How to choose dahlias

Depending on the purpose for which dahlias will be grown, and selected varieties in shape and size of the inflorescence and height of the Bush. 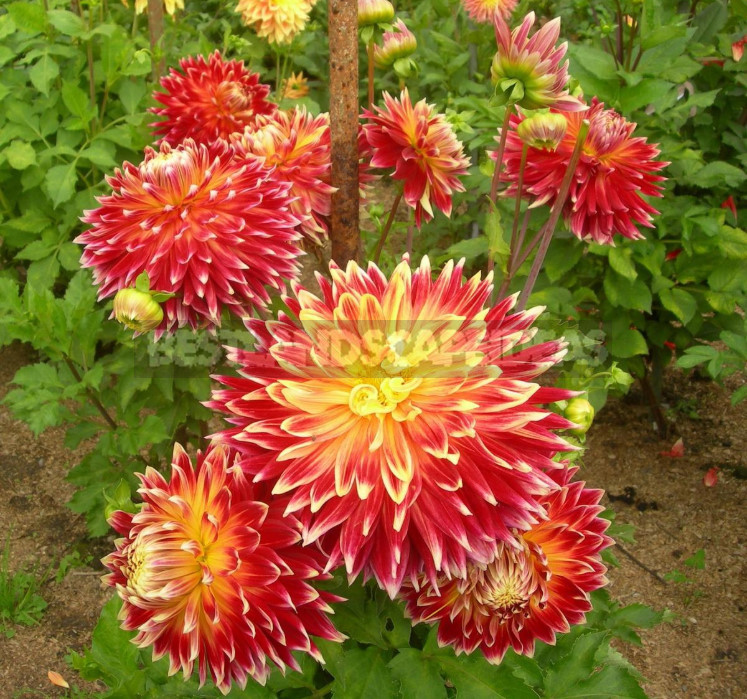 Among the dahlias you can always find the variety that would meet all your design requirements. Dahlias are indispensable when creating gardens of a certain color. Not so many ornamental plants, among which you can find such a variety of colors and shades, inflorescence shapes and different heights of bushes. This variety makes it possible to choose any combination of color and height.

In spring and summer the garden is decorated with numerous flowering tulips, peonies, irises and other perennials, as well as a large number of annuals, and not so many flowers in the fall. And only dahlias are the most colorful and bright autumn flowers. 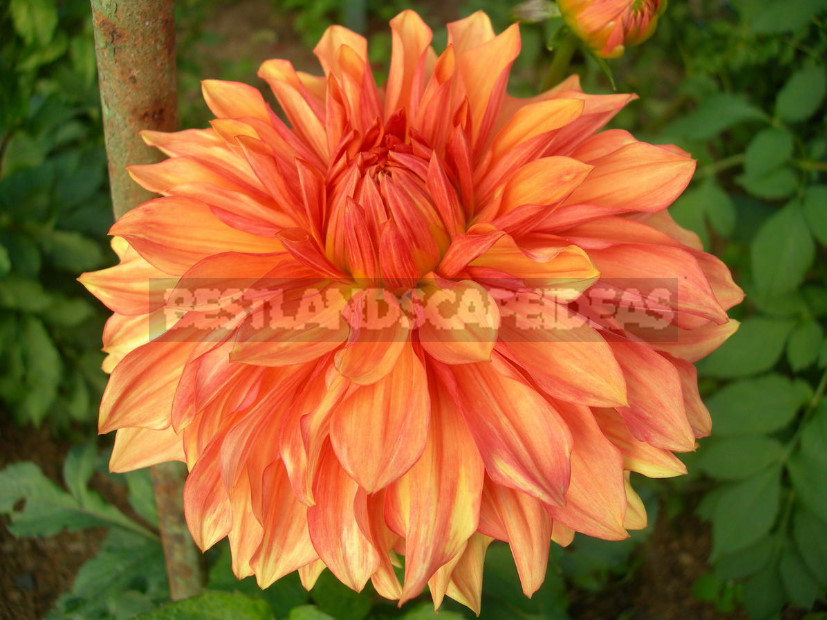 You can plant only one variety or choose a contrasting composition. Combining in planting low varieties with lower, you can get a beautiful carpet flowerbed. And dahlias are good because by planting only a few bushes, you can create a festive color spot anywhere in the garden.

For cutting usually select varieties of pompom, spherical, Nymphaeum, decorative, cactus and semi-cactus groups of dahlias. In this case, the following agricultural techniques are used.

The so-called removal by hand or pruning shears upper growing part of the stem above the third-fourth leaf, to Wake up the buds in the axils of the leaves, and the plant was developed in two stem. 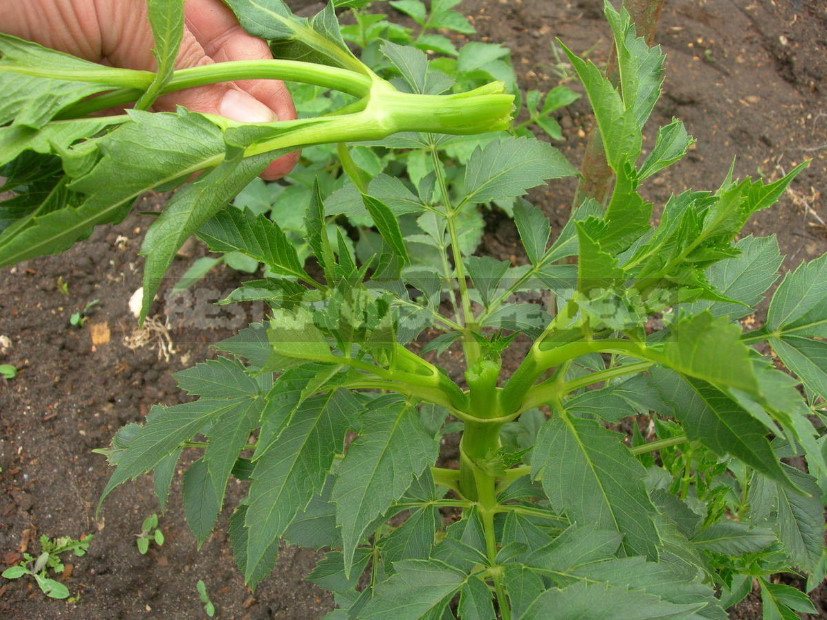 Reception use for increasing number of shoots on a Bush and in those cases, when a plant evolves in one crafting.

This is the removal of unnecessary buds. Dahlias have 2-3 buds at the same time. If you leave them all, the first on a short peduncle reveals the middle flower, and only then the other two, towering over the first, and the flowers seem to hide in the green leaves. 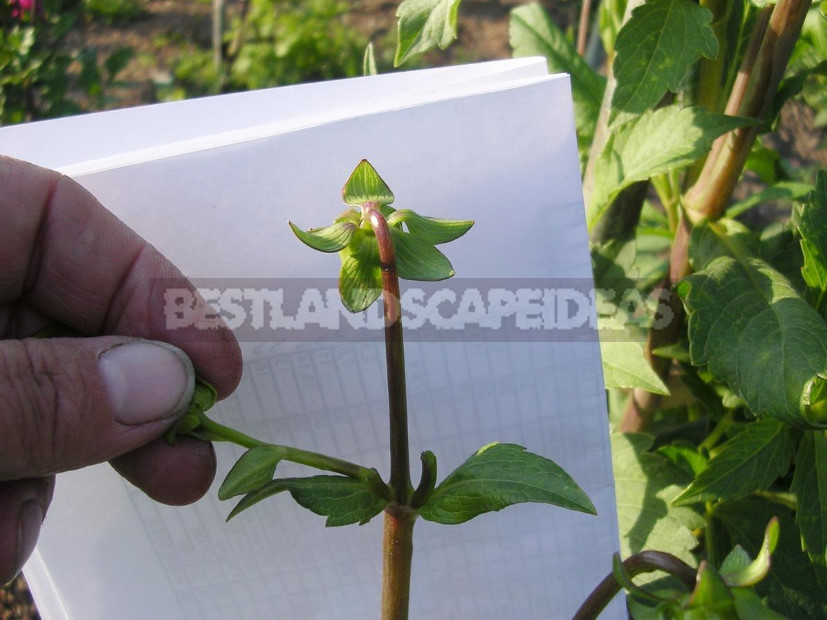 To obtain a larger flower, you can remove two side buds of three, while the peduncle grows stronger and shorter. When you remove the middle Bud, the two remaining buds develop faster, the diameter of the flowers is slightly smaller, and the peduncles are longer and thinner.

This breaking out of the side shoots that appear in the axils of the lower leaves on the main stem. It is carried out in the first half of the summer, as the Stepsons in the initial stage, and stop with the beginning of flowering. 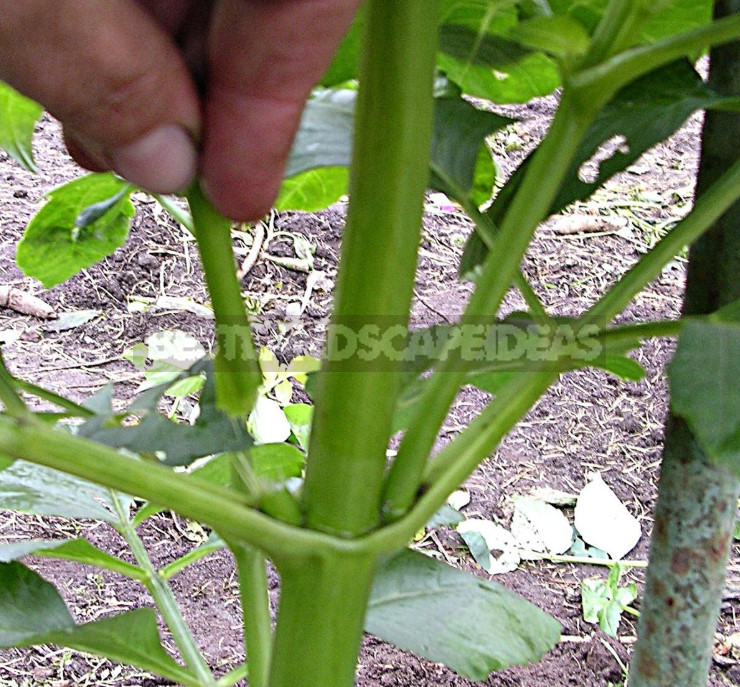 The formation of lateral shoots thickens the Bush, delays flowering. Strongly developed side shoots break off under its own weight and from the wind. Such breakages can lead to the death of the whole Bush.

Advantages and advantages of dahlias

1. Large selection of varieties.
2. Variety of color, Terry, shape and size of the inflorescence.
3. Flowering in the first year of planting, abundant, continuous, long from mid-July to frost. 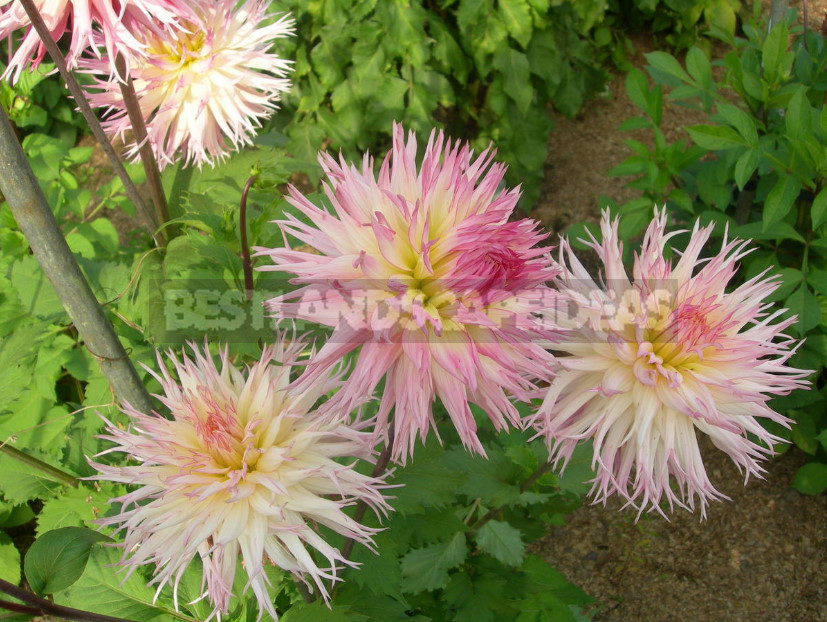 4. Compact fast-growing bushes height 25-170 cm, well leafy, with light or dark green leaves (there are varieties with dark anthocyanin color).
5. Simple, standard agricultural machinery.
6. Plants can grow on any soil.
7. Sufficient drought resistance.
8. Ease of reproduction (division of the nest of root-tubers, cuttings). Planting one planting unit in 2-3 years you can get 5-7 telenok, and rooting cuttings from 5 to 30 units annually. 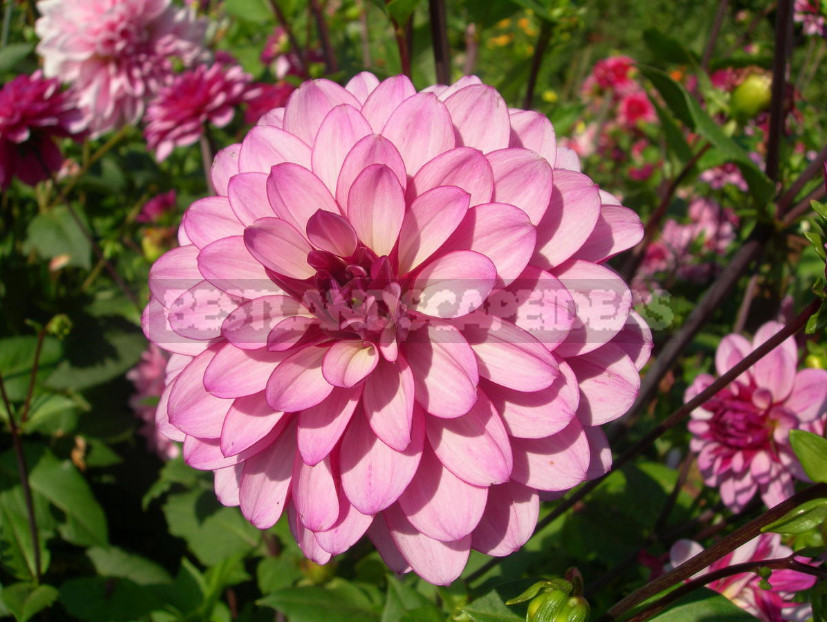 9. Low degree of pest damage.
10. Possibility to use for cutting.
11. 1-3 bushes of dahlias are enough to decorate the front garden. And on the new site, while perennials grow, dahlias will decorate your flower beds in the first season.

1. The need to dig up tubers annually and store them in a dry non-freezing room.
2. Do not withstand frost.
3. For tall varieties need support. 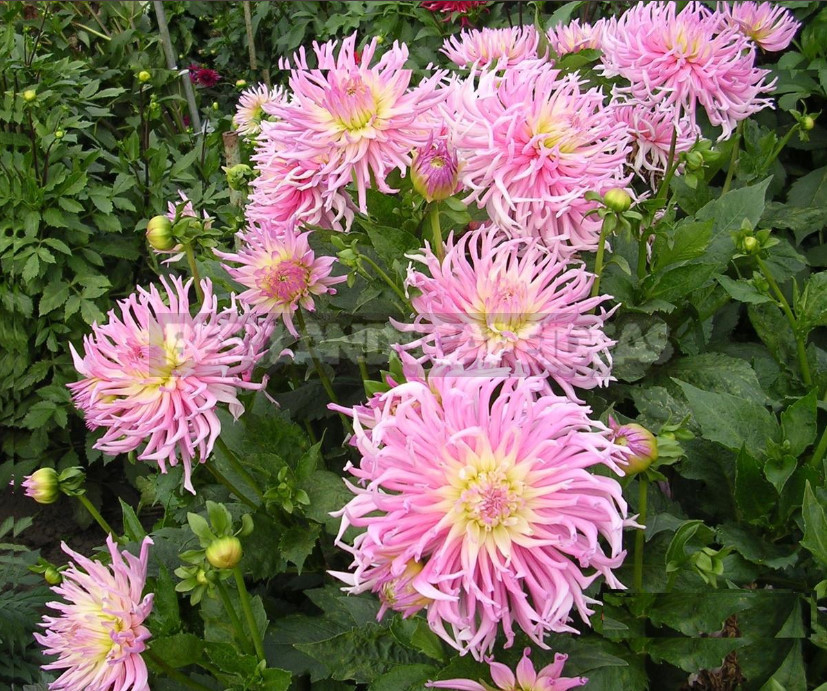 4. Light-loving plant, under the trees will not bloom.
5. A strong susceptibility to viral diseases.
6. The need to share every 3-4 years. If you plant too large nest without division, during the season will have to deal with unnecessary shoots (a lot of greenery – few flowers). 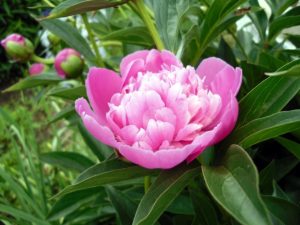 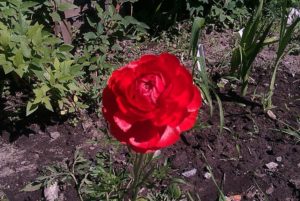 Mysterious Flower with the Name “Buttercup” 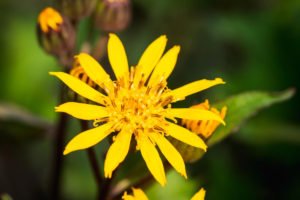 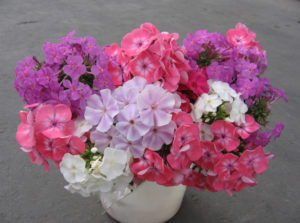 About Phlox With Love