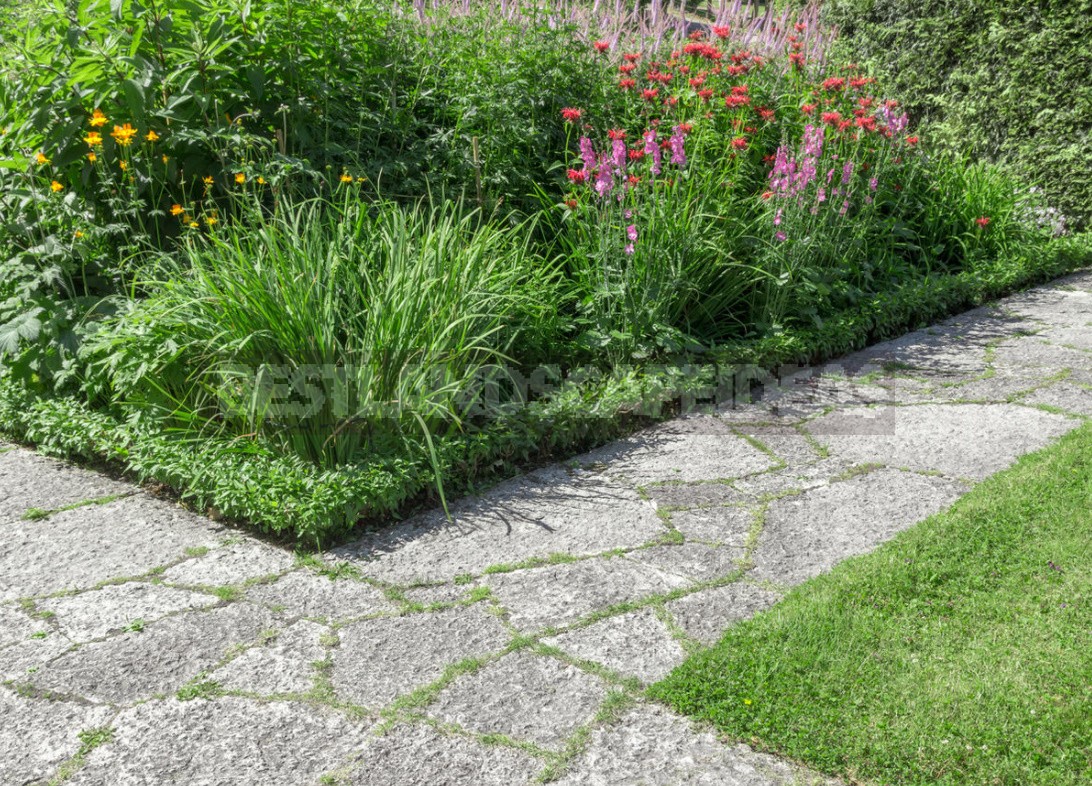 Often in gardens you can see two extremes: simple, convenient and purely utilitarian paths (from the gate to the door diagonally) or, conversely, narrow, numerous, ornately looping and creating an intricate pattern. But that’s why they are extremes, so that, starting from them, we can find a golden mean.

From point A (barbecue at the bathhouse) to point B (gazebo by the pond) at 14.00, a pedestrian came out with a dish of steaming barbecue. He cheerfully overcame the first five meters of the way in three seconds. Then, without noticing the steps, he performed a spectacular somersault, but the kebab caught and continued to move. Having stumbled twice on the flagstone pavement with grass sprouted in the seams, the pedestrian slowed down 25 times, carefully feeling the ground under his feet, because he could not see the road behind the barbecue. After wandering for two minutes along the numerous paths of the shadow garden, the pedestrian found that he had entered the playground, after which he returned to the starting point and tried again. When he reached the pond, getting deeply bogged down in the gravel fill, the pedestrian, swinging, went to the finish line — a path through the water through a step on concrete pillars…

We often hear that the walking route on the site should be interesting. But we forget that the key word here is “walking”. 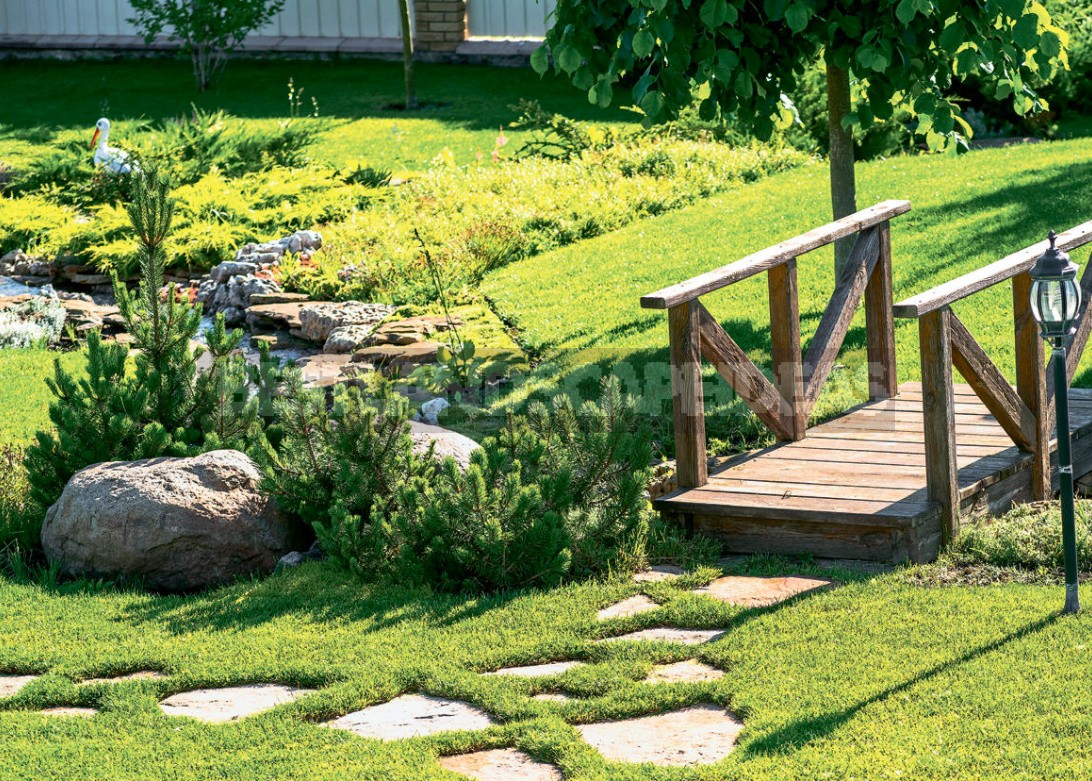 Therefore, let’s divide: there are main paths connecting the buildings and the main areas of the site, and there are additional, secondary ones, along which we walk for pleasure.

The task of the first is to bring us to “point B” in the most convenient and, if possible, the shortest way. The task of the second is the opposite: to ensure the longest and most boring walk in a small area. Let’s start with the first ones. 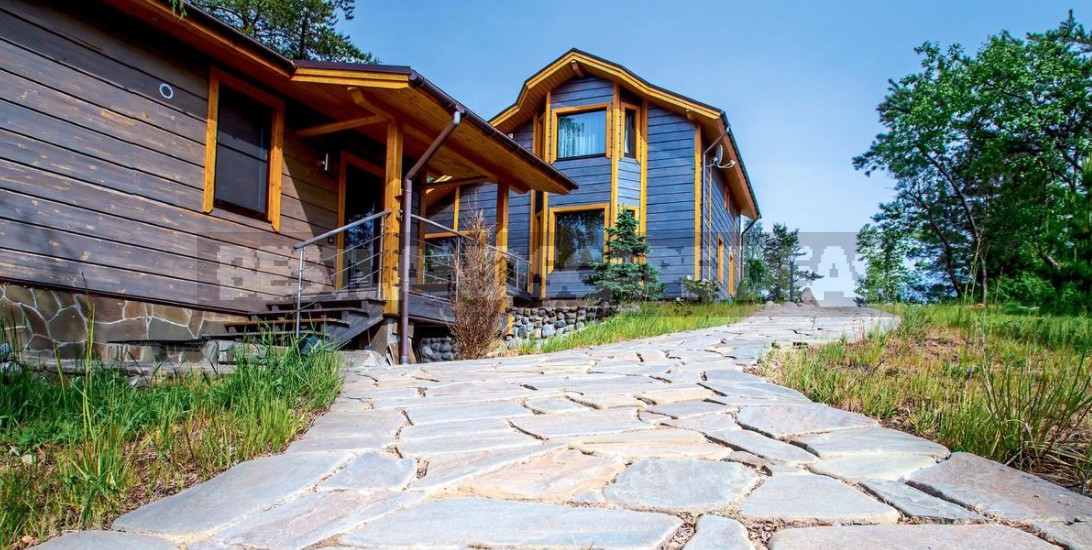 So, vital objects are a house (every exit), a garage, a gate-gate, a bathhouse, a vegetable garden, a greenhouse, a gazebo, a barbecue. It is these that we connect with smooth, wide, straight or slightly curved paths, with a smooth, but not slippery surface. They will take over 90% of our movements in the garden and provide comfort. What tracing options are possible here, and what should be avoided?

Why did it sound “as soon as possible, in the shortest way”, why not make the pedestrian path straight? Indeed, the shortest path is a straight line, and this is an absolute plus of such tracks. But if we start connecting all the numerous objects scattered around the site to each other with straight paths, there will be no living space left on the territory.

Cutting the entire lawn at random is not the best option. But even if there are few objects (and, accordingly, tracks), we, the fastidious, will still not be satisfied with this option — it’s ugly! It’s not that it’s ugly in itself, it’s just that the paths — whether we want it or not-make a “drawing” of the garden. It would seem stupid to make the tracks deliberately inconvenient in order to provide a drawing! What kind of path painting is this? And, nevertheless, the whole history of architectural development of territories, from urban planning in general to the square at home, not to mention gardens and parks, is the history of the struggle of the beautiful with the convenient. Beauty won — we get Versailles.

And if you do not make oblique paths, but straight ones with branches? A good rectangular structure, tied to the house in the directions, will decorate any space. And with this already to Mr. Pythagoras. This is not the shortest way, oh, not the most! This is confirmed by the numerous paths trodden through the lawn from the entrance to the bus stop, appearing despite the freshly painted decorative fence and bushes. And, look, they paved a slanting path in the spring, our hypotenuse! “Convenient” won.

Why do we so dislike walking along a geometrically correct path with the intersection of paths at right angles? 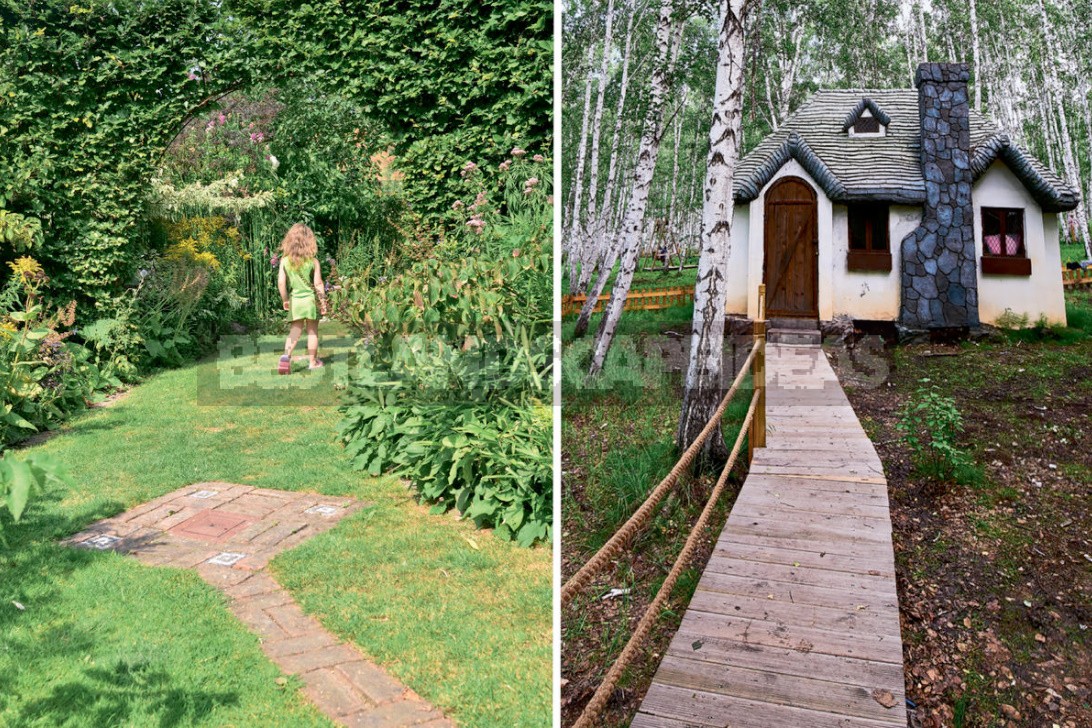 Apparently, the property of the body to save a resource is manifested. Here it is, the bathhouse, diagonally to the right, I go there! No, dear, you will walk straight along the path for fifteen steps, and then turn right. Mentally, a person understands that an extra couple of steps will not only not hurt him, but even, on the contrary, is useful, but every time he is drawn to cut a corner. 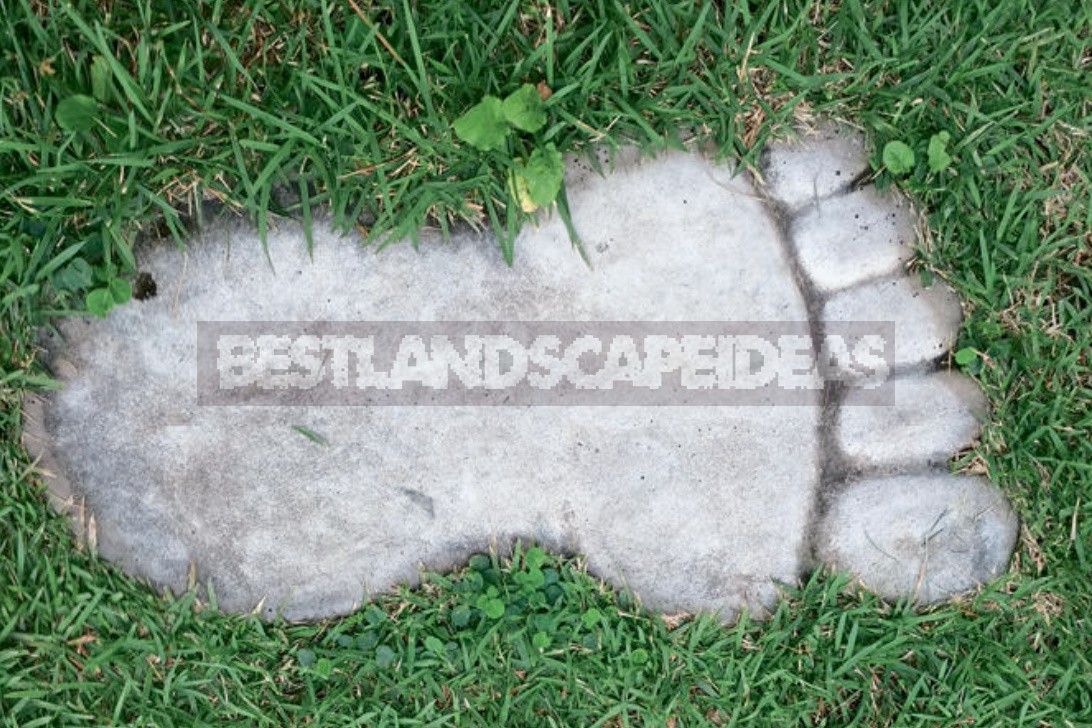 Sometimes he forces himself to walk to the turn on the path, sometimes he decides to smooth out the trajectory a little, squinting to see if his wife sees that the lawn is being trampled. And this internal dilemma arises constantly, forcing a person to make a choice, confusing him for a split second. The verdict is inconvenient.

But there is one good remedy. If you come to the dacha in winter, clear the path to the bath, throwing snowdrifts around to the waist, you will find that you are walking calmly along the very path that irritated in the summer. And all because the opportunity to shorten the route has disappeared — do not climb through a snowdrift. There are no options — there is no choice, we go quietly.

This technique is used when laying parallel-perpendicular tracks. Let’s recall the classic park bosquets, rectangles between paths with hedges around the perimeter. It is worth planting any plants, single or in compositions, on all problem areas, blocking the possibility of unplanned movement — and the problem is solved!

Of course, the radii during turns also help a lot. I cut a corner, but – within the roadbed.

And if the radius is made a little more, and a little more, and even a little more?.. Gradually, the line will turn from straight to curved. And at the moment, for example, such smoothly running tracks clearly prevail in the total mass. It is not surprising: it is convenient to walk, and the eyes are pleasing! In addition, they have a great advantage: a flexible line will easily “collect” all the disparate objects on the site.

But there is also a drawback: the extreme inconvenience of laying any piece coating, whether it is paving slabs or clinker bricks. Unlike straight paths, where, if desired, you can do without cutting tiles, curved shapes will require some effort and skill of craftsmen. That’s why such paths are made mainly of wild stone, which in itself is not bad.

If the plot is small, you don’t need anything else besides the main paths. But with an increase in the area of land ownership, there is a need for its development and the laying of additional communication routes. 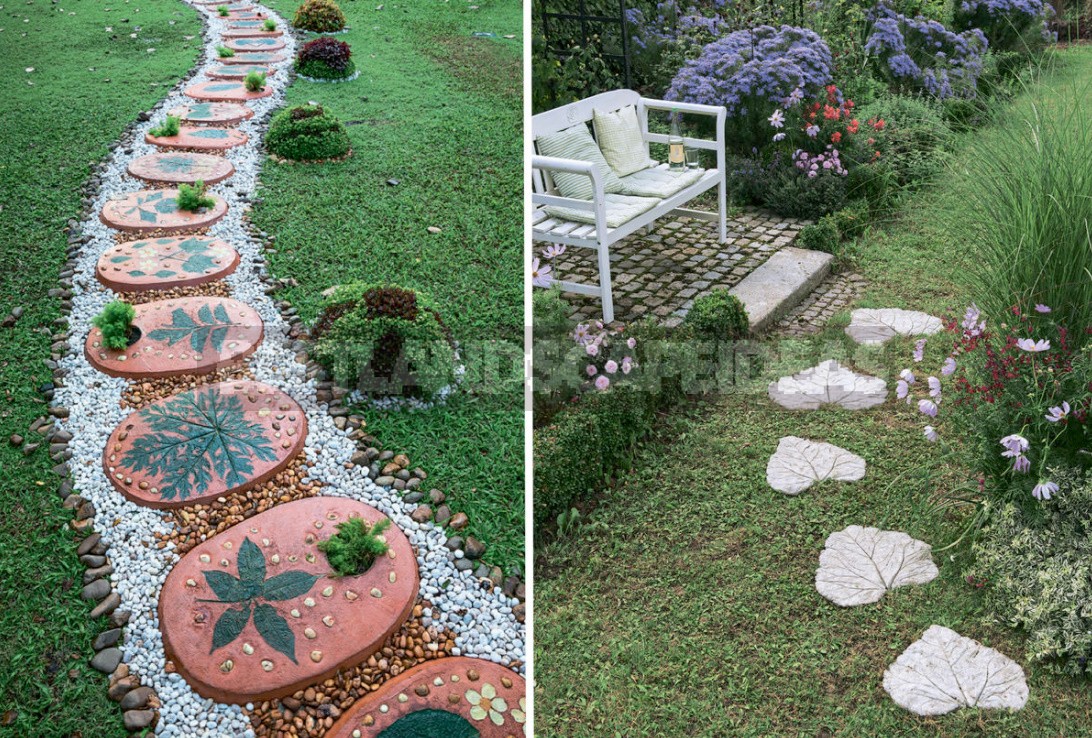 Already at the design stage, it becomes clear that nothing original will turn out of two or three simple tracks. I want a beautiful geometry, smooth lines, a more subtle structure. An elegant drawing of paths is exactly what distinguishes a landscape project from a “plot layout”, what a person pays attention to first of all, which, in the end, distinguishes one plan from another. Here we are already talking about a full-fledged road and path network. It includes all possible paths, driveways, passageways, forest paths, backfills and playgrounds. 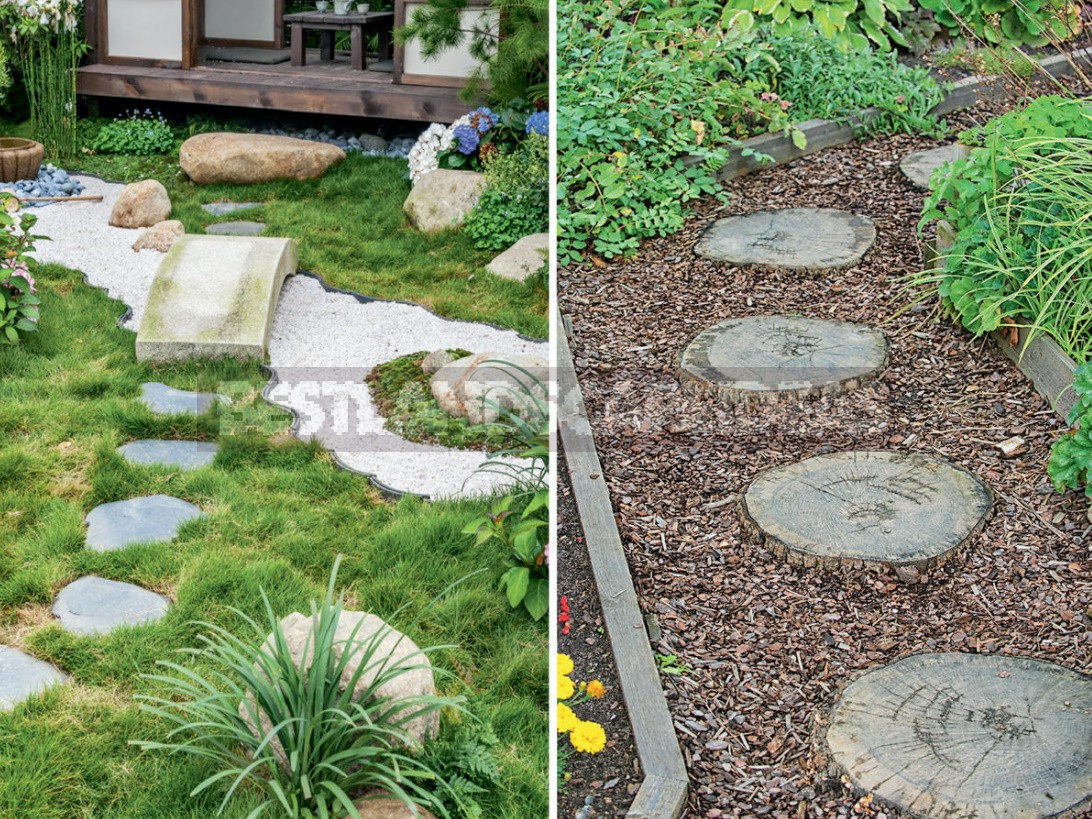 In addition, if we limit ourselves to only the main tracks, as is often the case, we will deprive ourselves of many joys. What are walking paths in nature? This is an opportunity to use the entire territory of the garden, to make it habitable. If we have only one path, we practically do not walk in the garden. How many times can you walk back and forth on it? Of course, you can get to everything on the lawn, but somehow everything does not work out. Or we are in slippers, and the lawn is damp, or it’s a pity to step on it, or just lazily without much motivation to take a step aside…

The paths give an occasion to pay great attention to the arrangement of all remote corners. Usually, neither hands nor feet reach them, that is, the precious land is wasted, but it could have been actively working. Children’s and shadow corners, stylish themed gardens, interesting flower beds can appear where no human foot has ever set foot before. 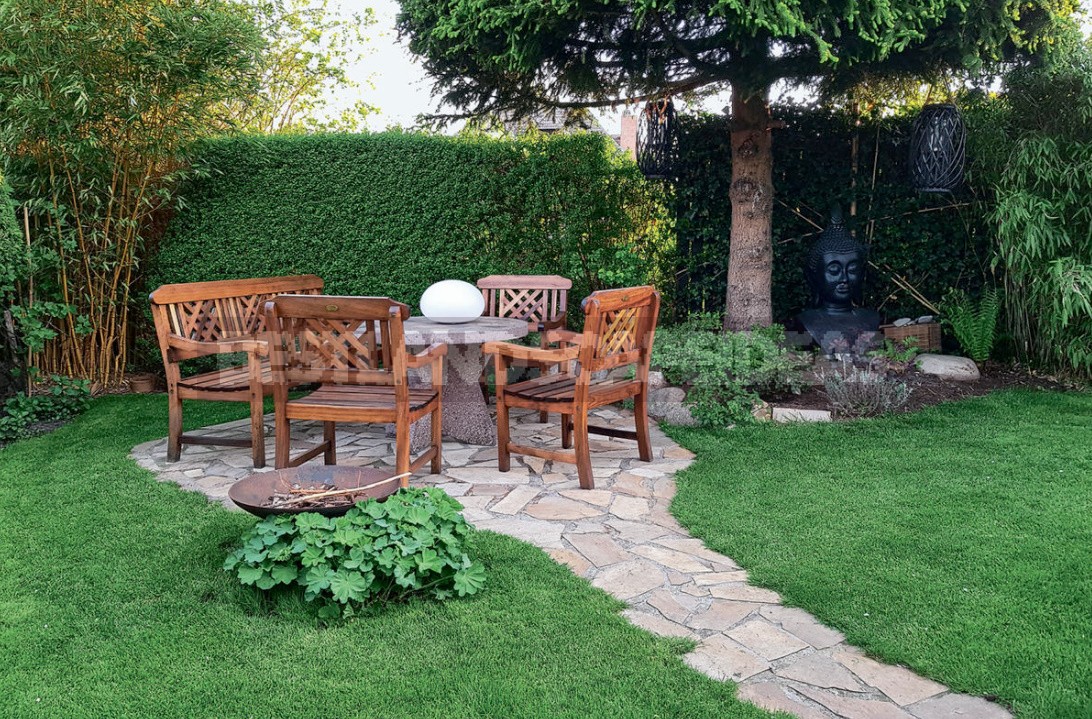 Since we are not in a hurry when walking, the paths, unlike the main paths, can loop as much as you want. Go abruptly to the side or split, go around the stones or lure us into a deep shadow, lead us to a stream or to a quiet gazebo. And the coating can also be any-flagstone through a step, wooden flooring, sawn sections, compacted gravel, larch bark fragrant after rain… 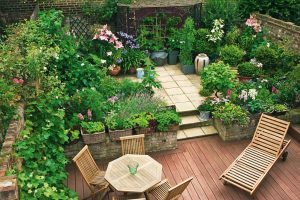 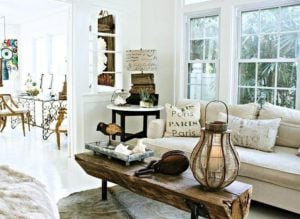 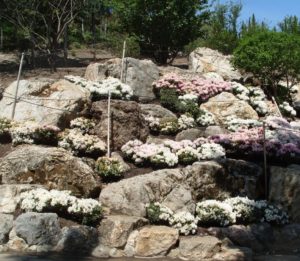