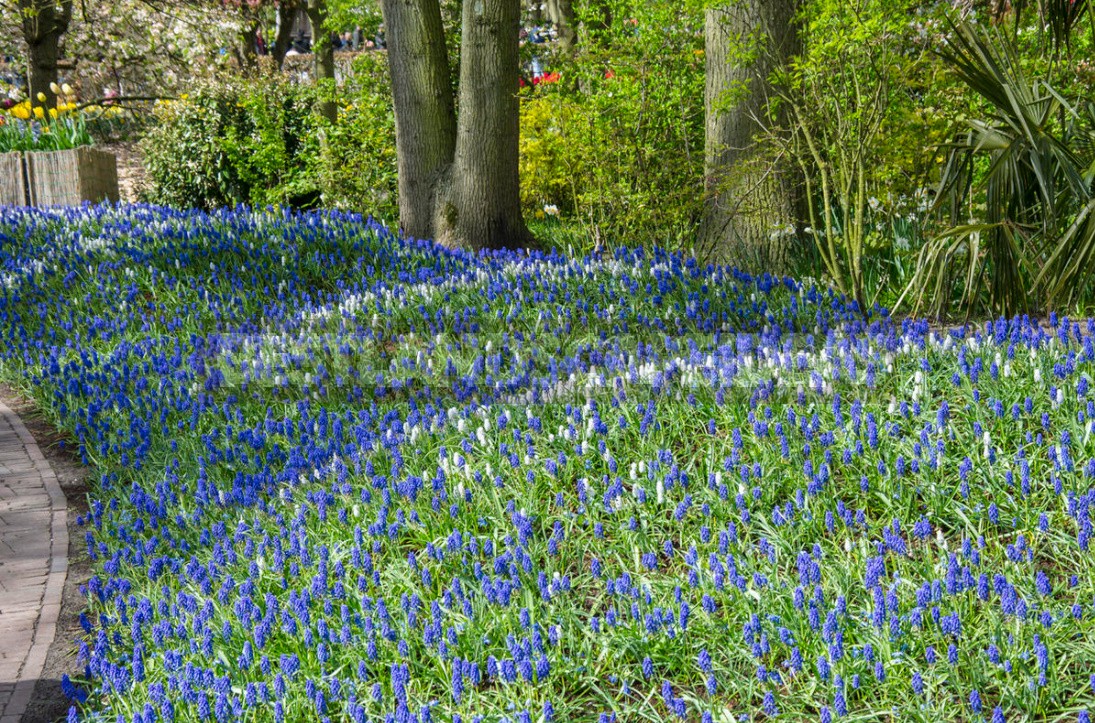 Among all the bulbous flowers, muscari is perhaps one of the most unpretentious. In spring flower beds, they always catch the eye due to the rare blue color of the flowers at this time of year.

Some Muscari species have a musky aroma, hence the genus name, which comes from the Latin word “muskus”. The British call this plant “grape hyacinth” because of the shape of the inflorescence, which resembles an inverted bunch of grapes.

Botanists count about 30 species of muscari, all of them native to the Mediterranean and Western Asia. At the same time, species often passed from one genus to another. Some of them, with more tubular flowers that are not pulled at the throat, now belong to the genus Bellevalia. And the species that once belonged to the genera Muscarimi, Pseudomuscari and Leopoldia have returned to the genus Muscari again. 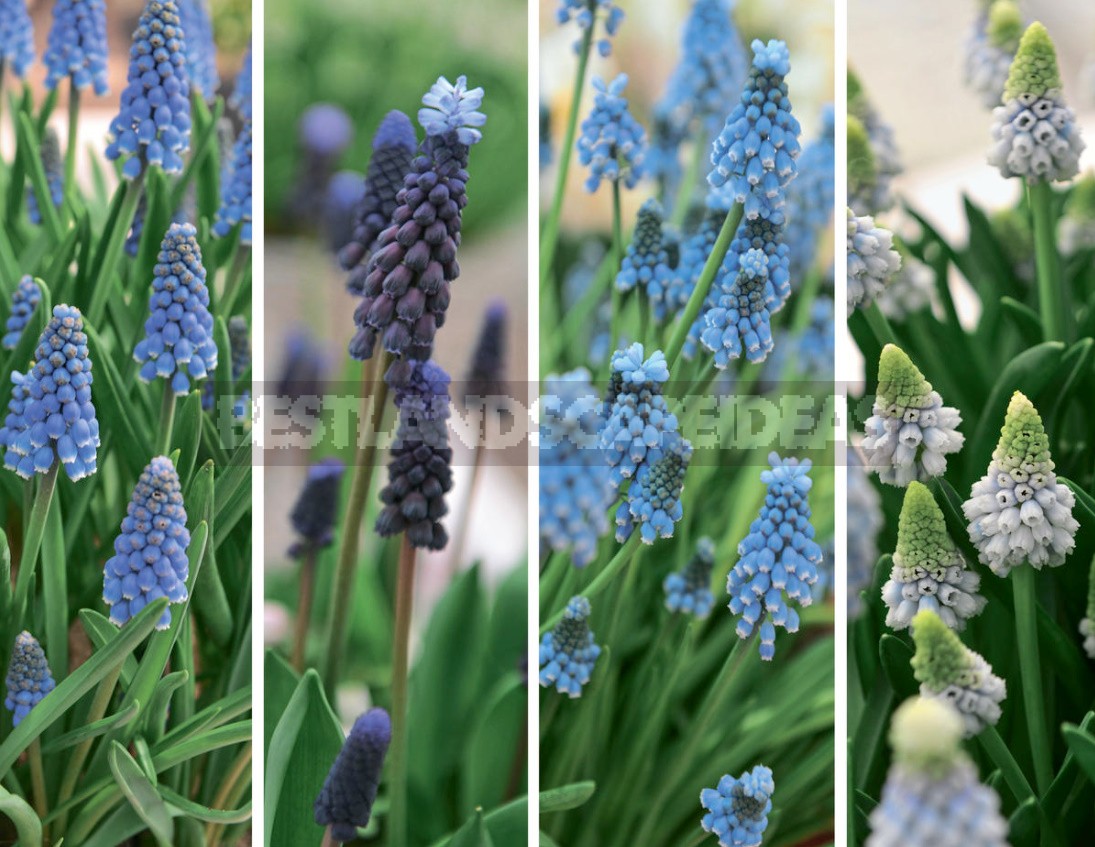 Muscari bulbs are rounded and fleshy, sometimes with a thin shell. The leaves are basal, narrow and linear, from 1 to 4 per bulb. The flowers are collected in dense brushes (in the case of muscari, I even want to say-in clusters) on bare peduncles. The miniature perianth consists of six fused petals (in some species – with a constriction in the throat). In many species, the flowers in the upper part of the inflorescence differ from the lower ones (they can be lighter or darker, and also differ in shape).

Important: in addition to shades of blue and light blue, there are white and pale pink cultivars and even varieties with double flowers.

Muscari are not demanding of soils, the main thing is that the water does not stagnate on them. In spring, during flowering, they need moisture, and in summer, during the dormant period, they prefer dryness. They grow well both in the sun and in sparse shade. The winter hardiness of the species is different, but the most popular ones grow without problems in the middle zone of Russia.

Muscari has no special enemies from among pests or dangerous diseases. Even Muscari mice, unlike tulips, do not like it.

We are enjoying the flowering of muscari. Every 2-3 years, it makes sense to mulch the plants in early spring with a thin layer of compost with the addition of bone meal. 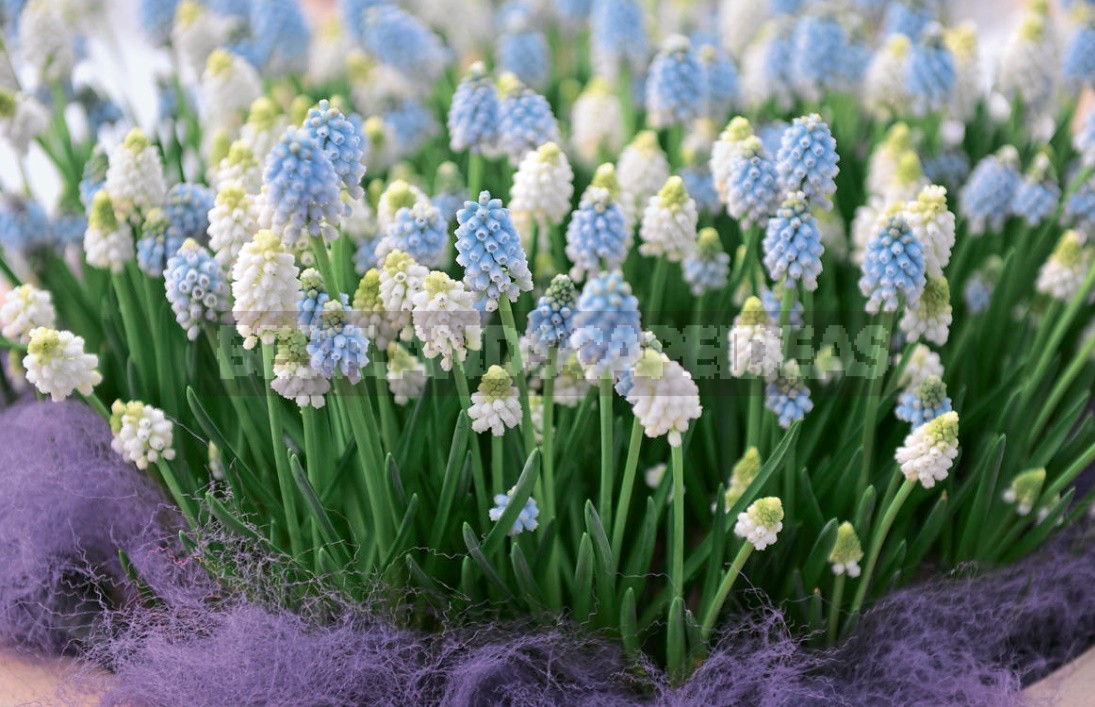 In some species, the leaves grow in autumn and winter under the snow, in others-in spring. They continue to grow even after spring flowering and wither for only a couple of months in the summer. The overgrown leaves look rather sloppy, but lovers of neat flower beds can always “comb” them with rakes so that they lie in the same direction. After the leaves dry up, you can divide the overgrown muscari nests. Usually this procedure is carried out once every 5-7 years. 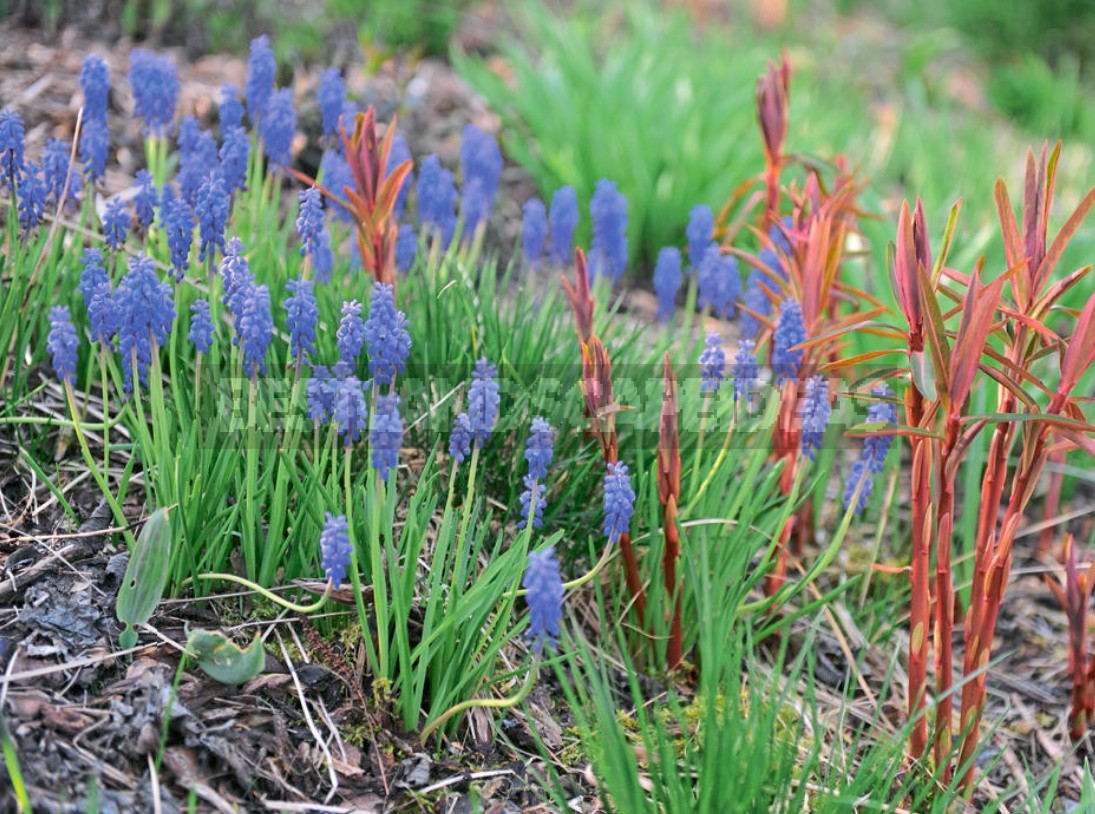 Important: in species that give a noticeable self-seeding after flowering, you can cut off the peduncles.

Muscari is planted as early as possible in September, to a depth of 5-8 cm (deeper on sandy soils). The distance between the bulbs is 10-12 cm, in plantings for one season, you can plant much denser. Late autumn is the time for sowing muscari seeds.

Muscari is propagated by children and by sowing seeds. The most common types give a lot of babies, which are dug out and separated from the mother bulbs when the leaves wither. Children can be dropped off at school for growing up or immediately to a permanent place. For them to bloom, you will have to wait a couple of years. The seeds are sown in winter in bowls dug into the ground. After a year, the seedlings are transplanted into containers or into a school. In the third year, they bloom.

Important: by sowing seeds, muscari from the Muscarimi group are usually propagated, the perennial roots of which are easily damaged during transplantation, as well as the Leopoldia group, which give few children.

10 ideas for a garden with muscari

1. Muscari look very impressive in the mass. In the Dutch onion Keukenhof Park, a long “river” of muscari with “tulip” or “narcissus” banks is planted annually. This stunning picture has already become a stamp, but it was and will remain one of the symbols of the park. 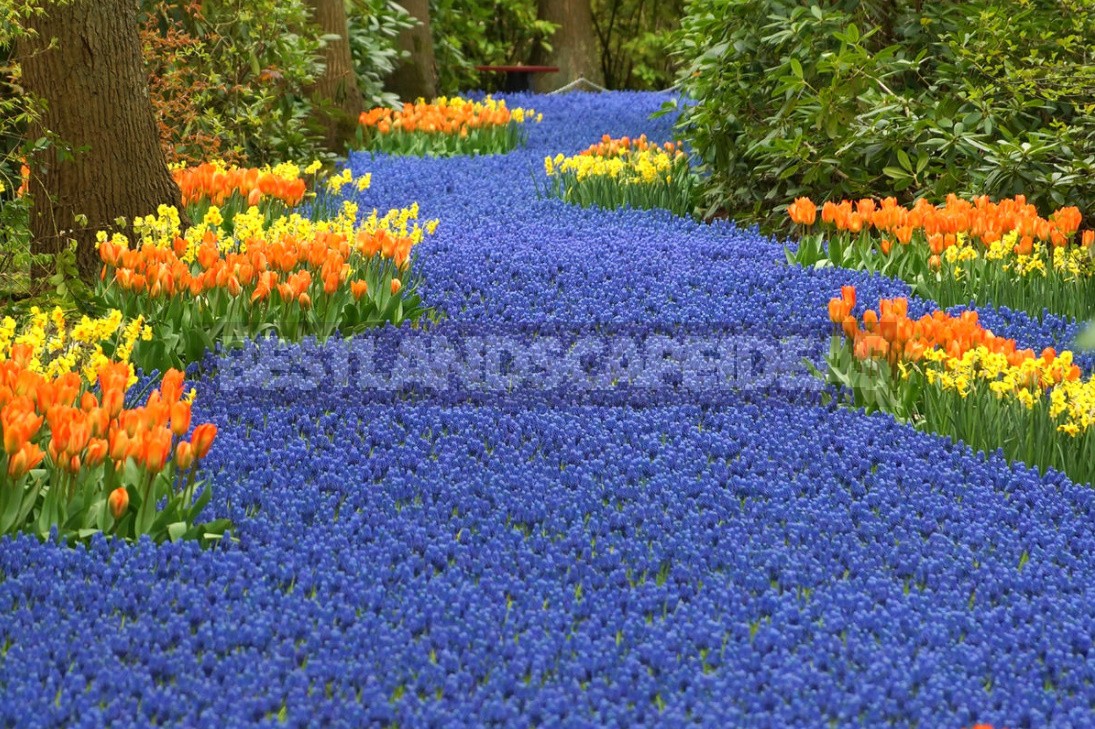 2. Muscari is added to the spring garden with a blue color, which is quite rare in flower beds until June. And this blue is a real find for compositions with other bulbous, as well as with Bellis, Viola tricolor, Primula, Pulmonaria, spring Anemone, Pulsatilla and other early flowers. 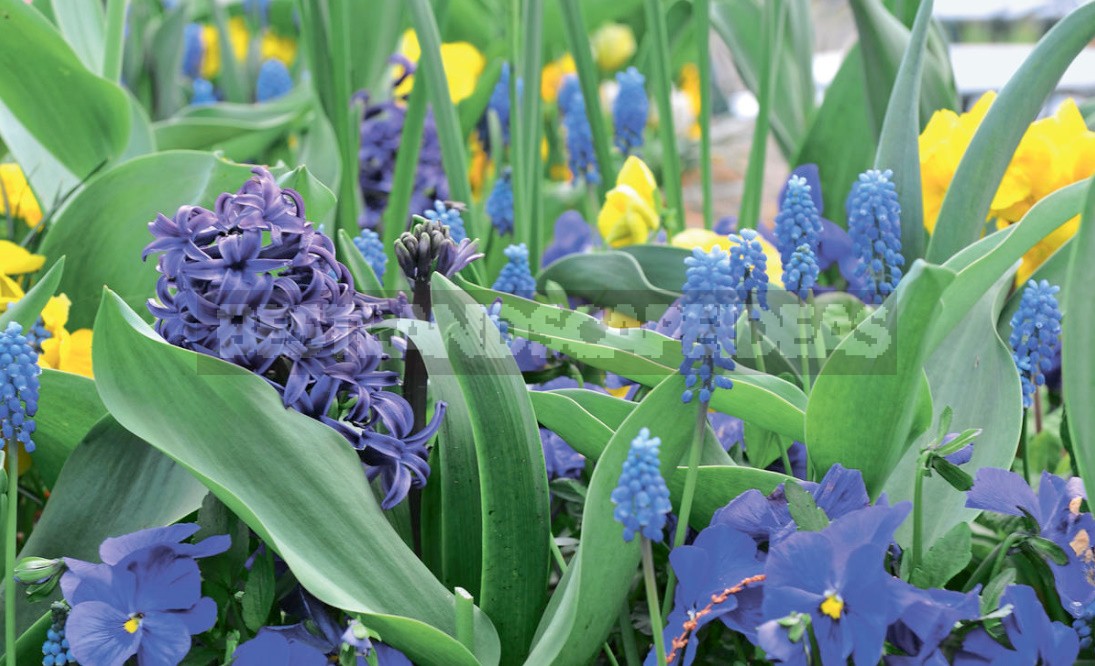 3. The “clearings” of muscari among trees and shrubs look very beautiful. 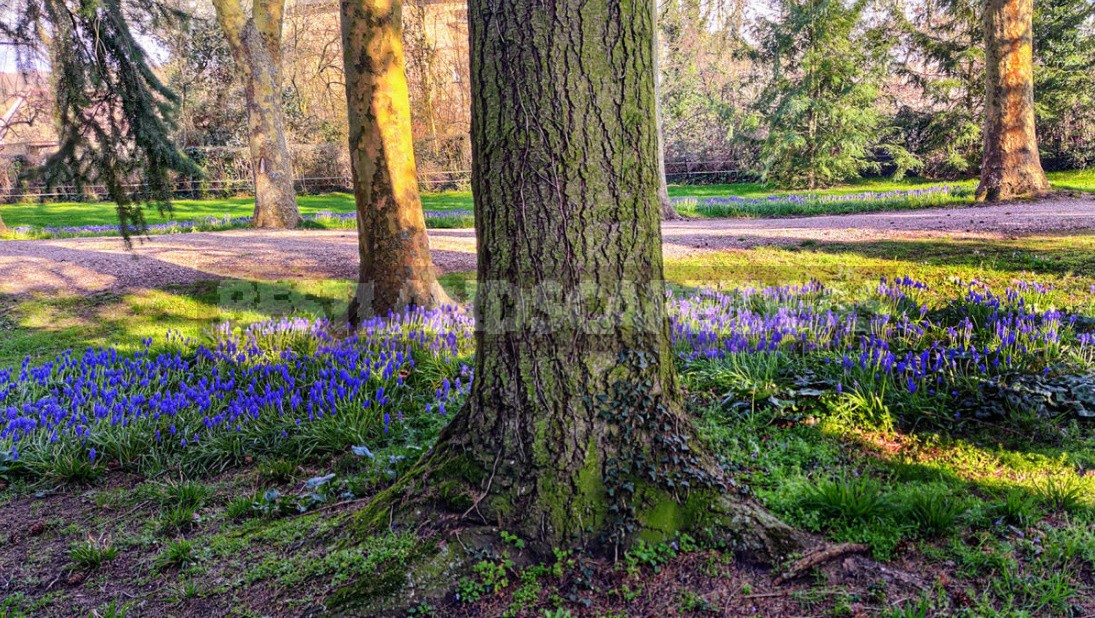 4. Muscari can be grown in containers that are dug into the ground for the winter. And in the spring, they are dug out and inserted into decorative planters. 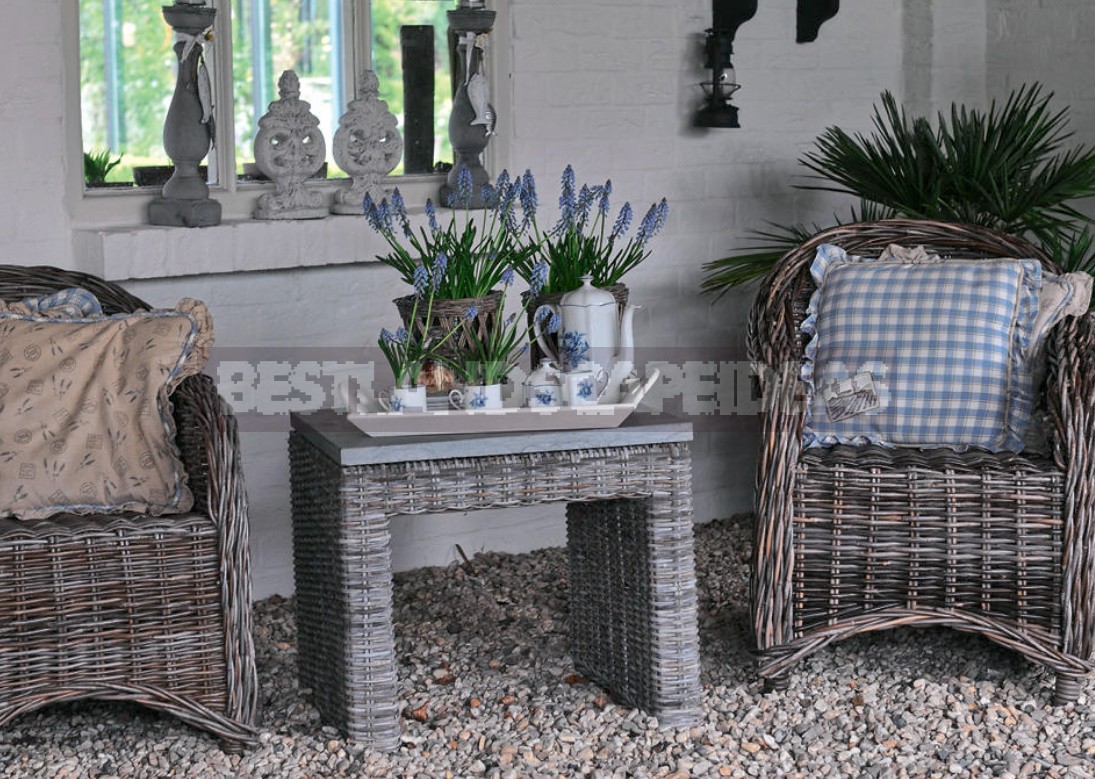 5. “Container” muscari can also be used in vertical gardening by selecting the appropriate “holders”.

6. Bright “spots” of muscari look great in the rockery among the stones. 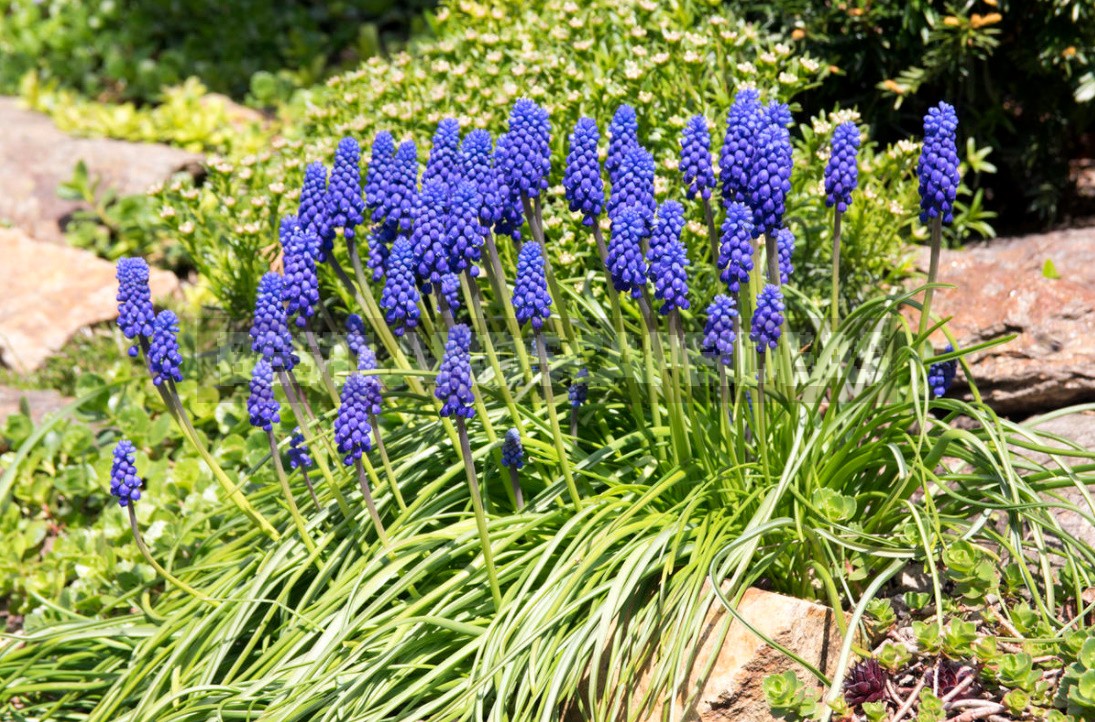 7. White muscari cultivars (’White Magic‘, ’Album’ and others) will become a worthy decoration of the spring flower beds of the white garden. 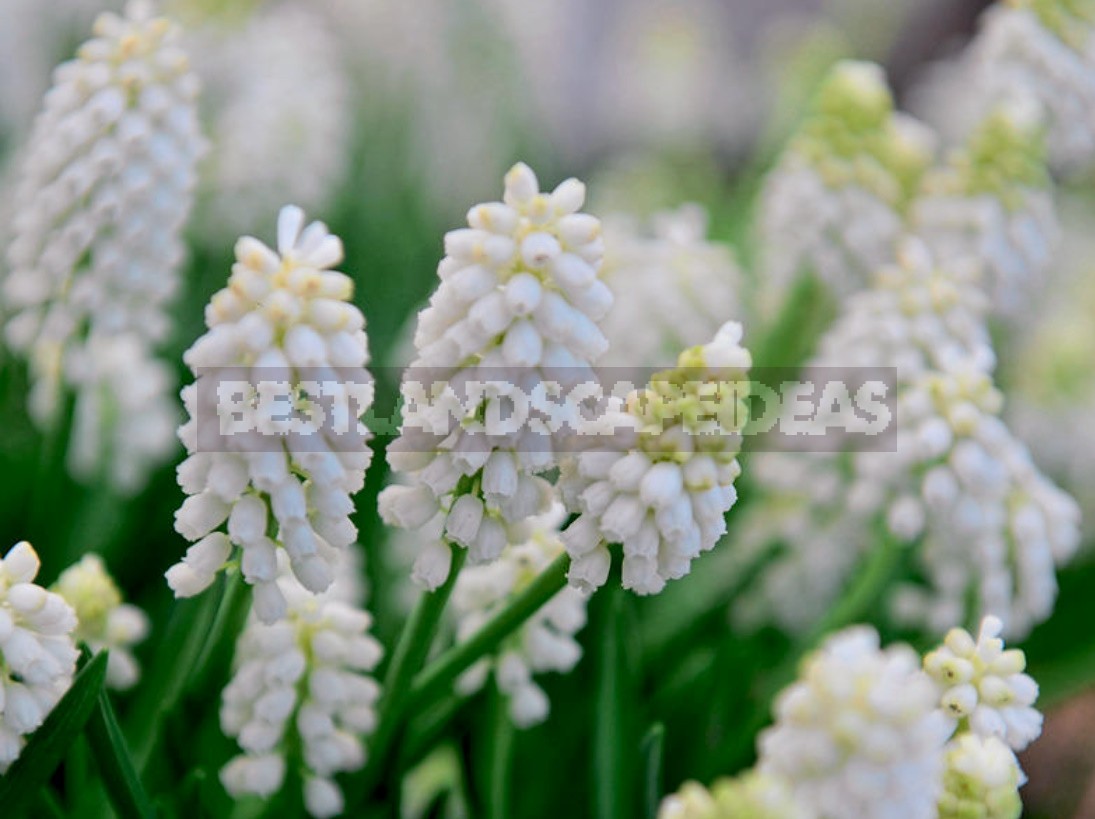 8. Pink varieties (for example, ‘Pink Surprise’) can become both a part of a romantic rose garden and a component of May flower beds in delicate pastel colors. 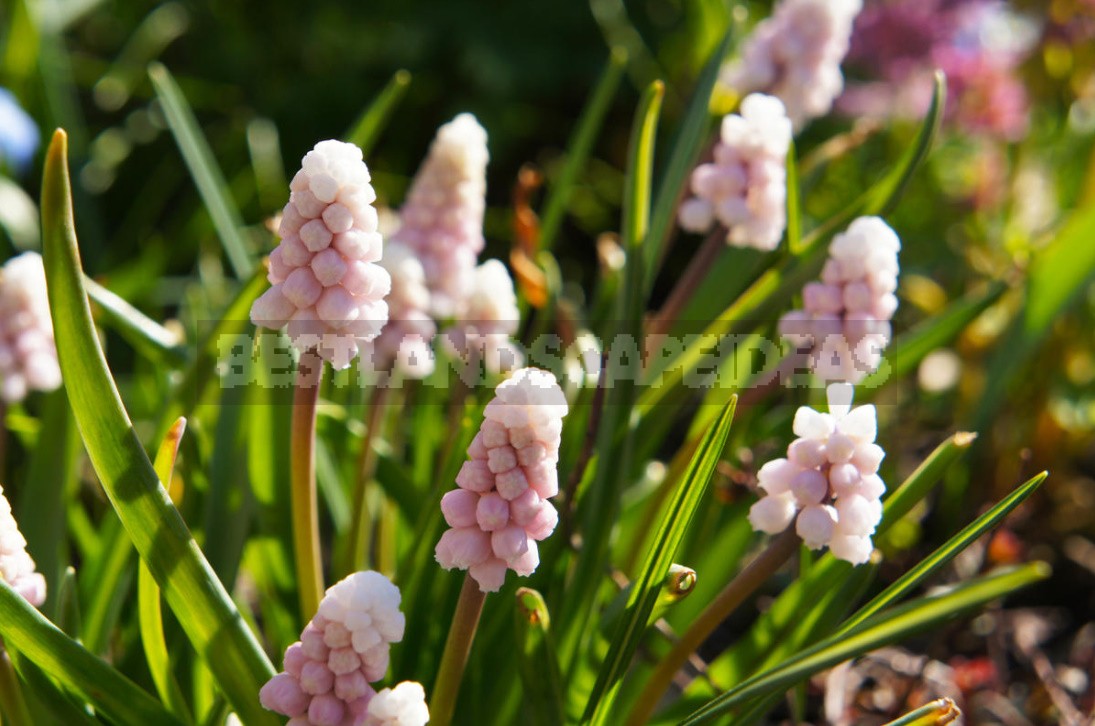 9. Without terry muscari cultivars of the ‘Blue Spike’ type, the garden of a collector of bulbous plants will not do. 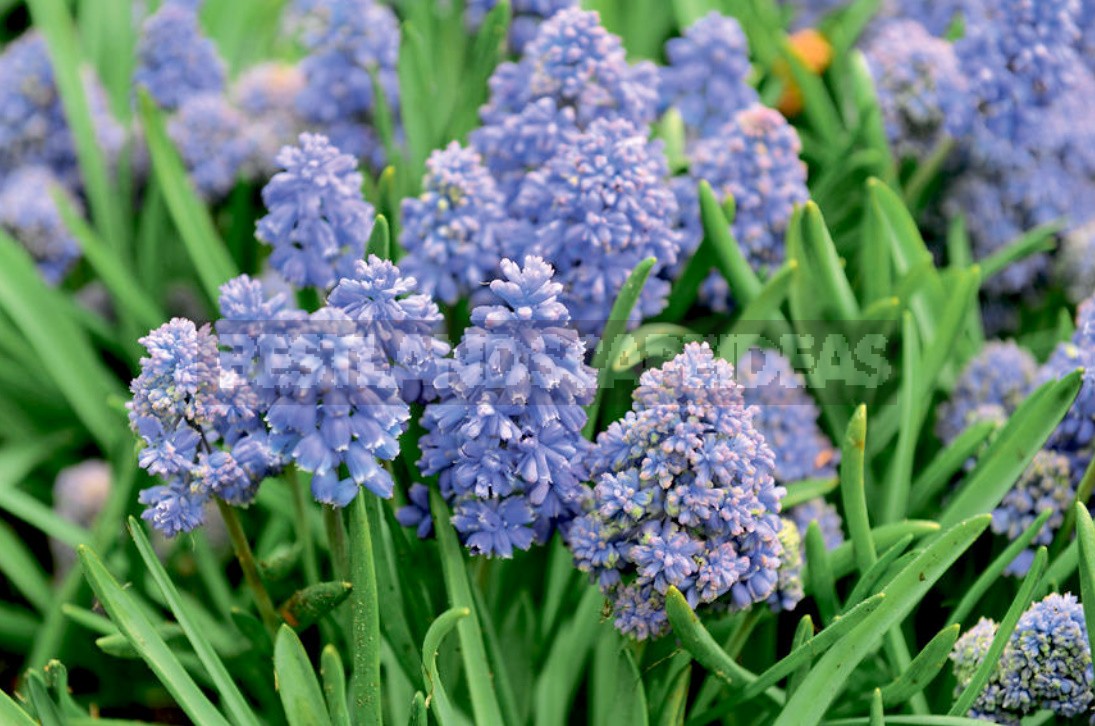 10. Large muscari bulbs are excellent for forcing. They are stored in August at a temperature of +20°C, in September it is reduced to +17°C. In early October, they are planted in bowls with drainage holes at a distance of 1-2 cm from each other, watered and kept in the dark at a temperature of +8°C for 2.5–3 months. As the soil dries, it is watered. 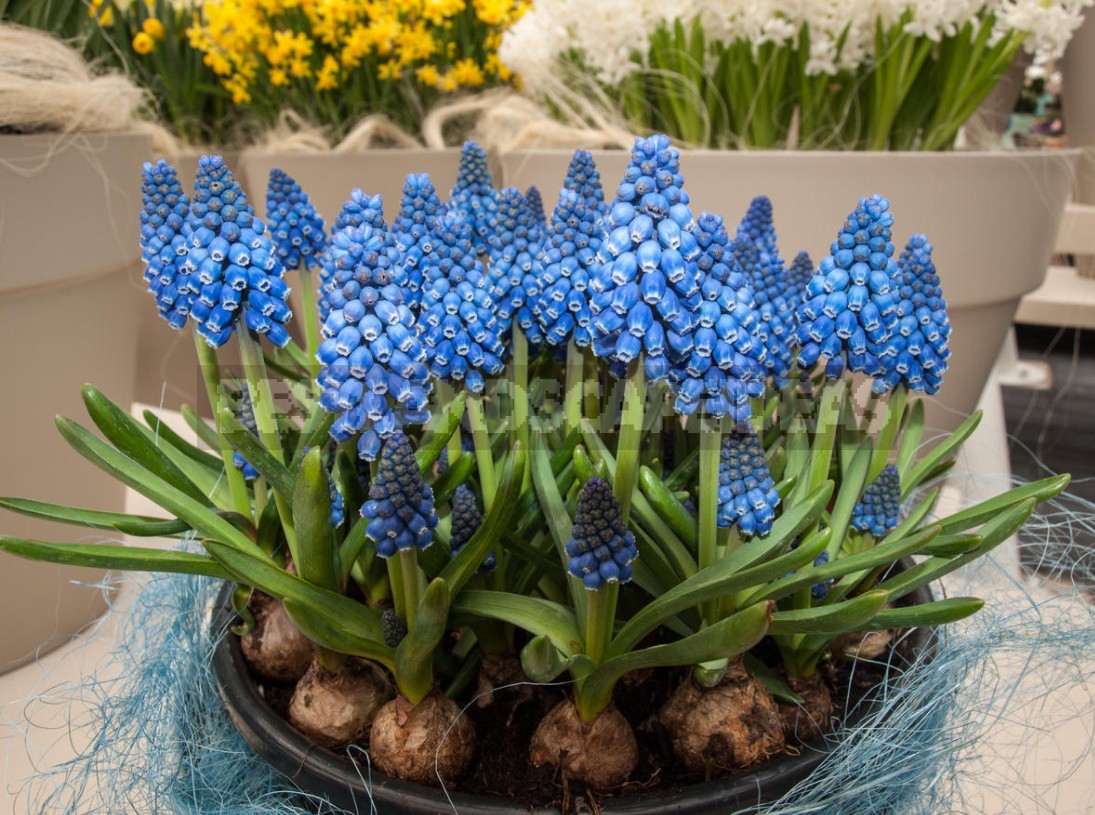 When the sprouts reach a height of 2-3 cm, the bowls are kept at a temperature of +3°C (it is possible in the vegetable compartment of the refrigerator). With the appearance of buds, the plants are exposed to the light. 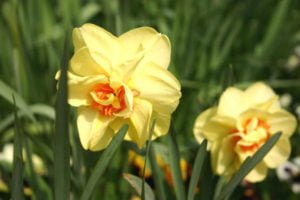 The Most Popular Varieties of Small-Cupped, Double, Triandrus, Cyclamineus Narcissus 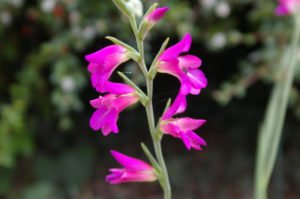 Rare Bulbous Plants of the Iris and Hyacinth Families 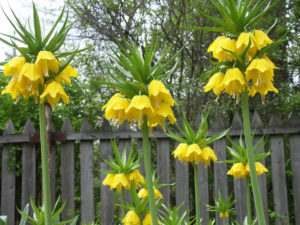 Fritillaria: Species and Characteristics of Cultivation 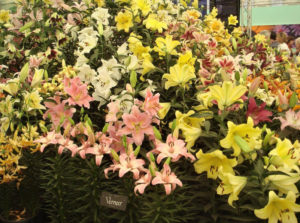