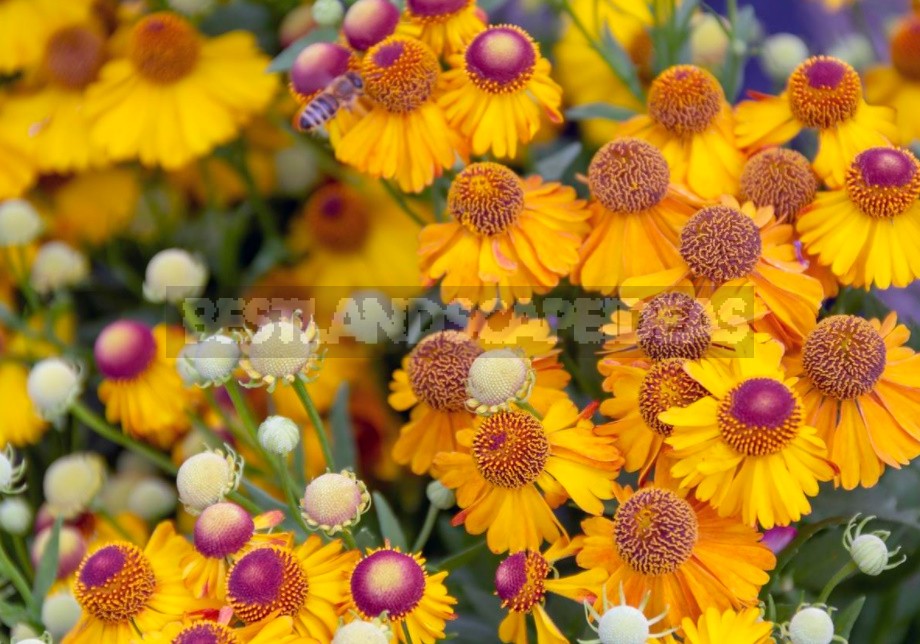 The birthplace of helenium is North and Central America, but it has long won the hearts of European designers, gardeners and just plant lovers. In Europe, this flower is called “sneezeweed”. This nickname is given to him for a reason — in ancient times, snuff was made from the dried leaves of some members of the genus.

The genus Helenium includes annual, biennial and perennial plants, the latter are most popular. Among them, the most popular are Helenium autumnale and Helenium hoopesii, which differs from the first in drought resistance, an earlier flowering period (June-July, for 4 weeks), long narrow tongue flowers — and a flat, wide yellow “button” of tubular ones. The stem of Helenium hoopesii has a grayish pubescence, and the root system is deep and well developed.

It is characterized by a surface sparse root system. The shoots of the plant are oriented mainly vertically, the height of the varieties reaches 90-150 cm (35-60 ft) (there are also compact varieties with a height of about 50 cm – 20 inch), the diameter of the bush does not exceed 30-60 cm (12-24 inch). Despite the fact that the stems of the plant are strong, in too windy and rainy weather, as well as with a lack of light, support may be required. 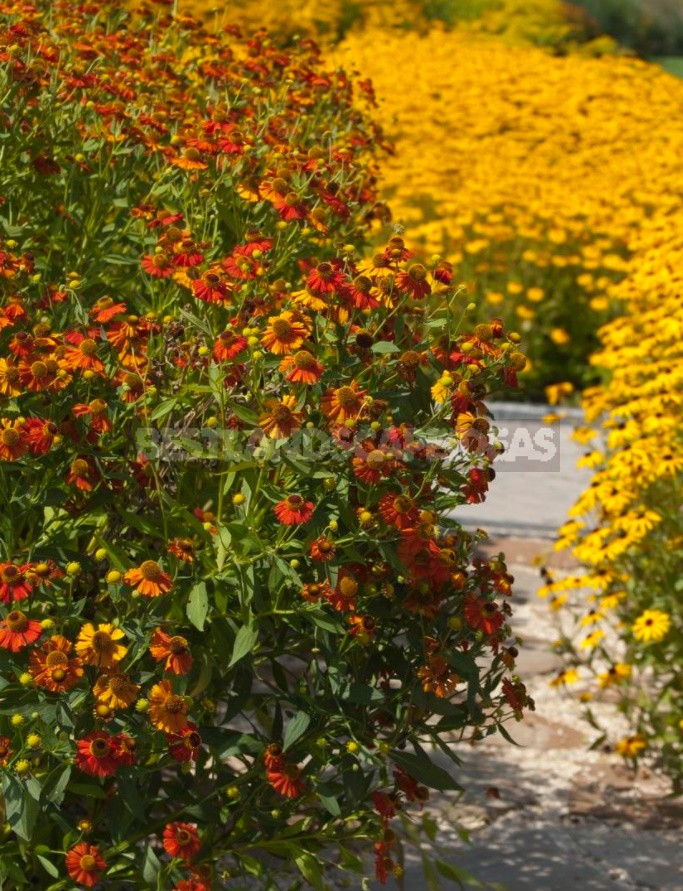 Helenium autumnale is a vegetative juvenile, as the plant does not have a wintering perennial rhizome. Over time, the buds are located closer to the surface of the soil, so it is recommended to mulch the plant annually in the fall, as well as periodically (every 2-4 years) division in order to rejuvenate the bush, produced in the spring (in April — early May).

The plant blooms from the second half of July to August-September. During this period, the plant pleases its owners with baskets of stunningly cheerful shades of tongue flowers from light yellow to rich red, bright or slightly muted, with strokes, edging, etc.The cone formed by tubular flowers is prominent and quite large, colored mainly in brown or chocolate shades, but there are varieties with yellow (‘Sommersonne’) or green in dissolution (‘Rubinzwerg’) cone. 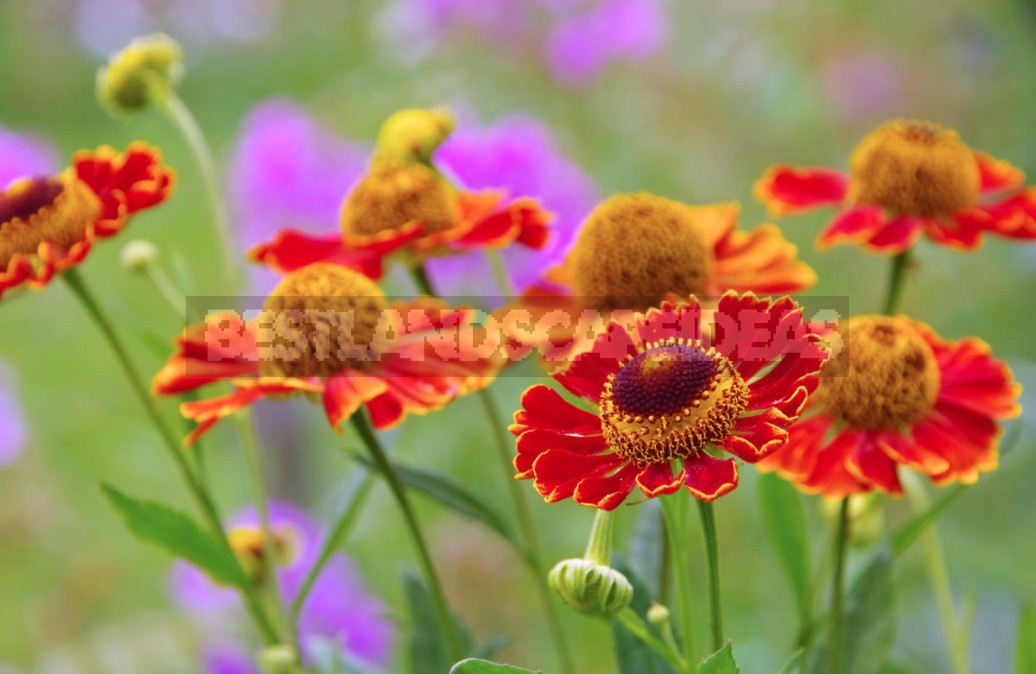 The emerging anthers adorn the cone with either a scattering of yellow specks or a golden ring, which undoubtedly gives the inflorescences an elegant and bright appearance. Since flowering occurs later, it does not make sense to talk about reducing the height of the plant after it (about cutting).

The Right Place and the Perfect Partners

Helenium autumnale prefers a sunny place, tolerates eastern and western influences. The plant is unpretentious, but it grows and develops better in fertile moderately moist or moist well-drained soils. The lack of light and moisture will negatively affect the flowering. The plant is quite resistant to pests and diseases.

Helenium autumnale looks great in the form and mass of solitaire. The combination of different varieties (variegated and monophonic) – creates a truly enchanting spectacle. It should be remembered about the bare” legs ” of the plant, which is especially noticeable in tall varieties. In the flowerbeds of the new wave, this is not terrible, but if you prefer emphasized neatness and man-made composition, then you should take care to cover the base of the bush with plants with a lush rosette of leaves (Sesleria, Carex, Astrantia, Alchemilla, etc.). 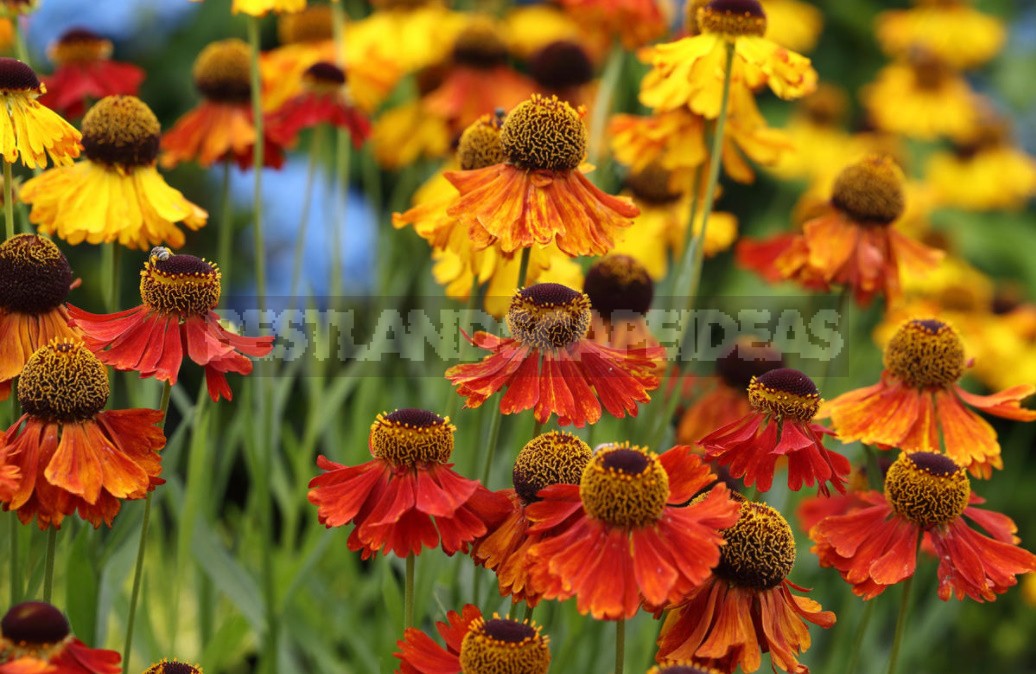 Varieties that have special inflorescences (double flowers — “Double Trouble”, edging – “Potter’s Wheel”) should be placed closer to the edge. The inflorescences of many varieties of helenium tend to deflect the lingual petals downwards closer to flowering — but there are also those that initially bloom with slightly deflected (“Flammenrad”) or, conversely, slightly ascending (“Feuersiegel”). This feature is not always emphasized, but it also creates a mood if the flower garden with the participation of helenium is located near the eyes of the observer: about 2 heights of the plant. (Let me remind you: the optimal distance for perception is 2-3 heights.) 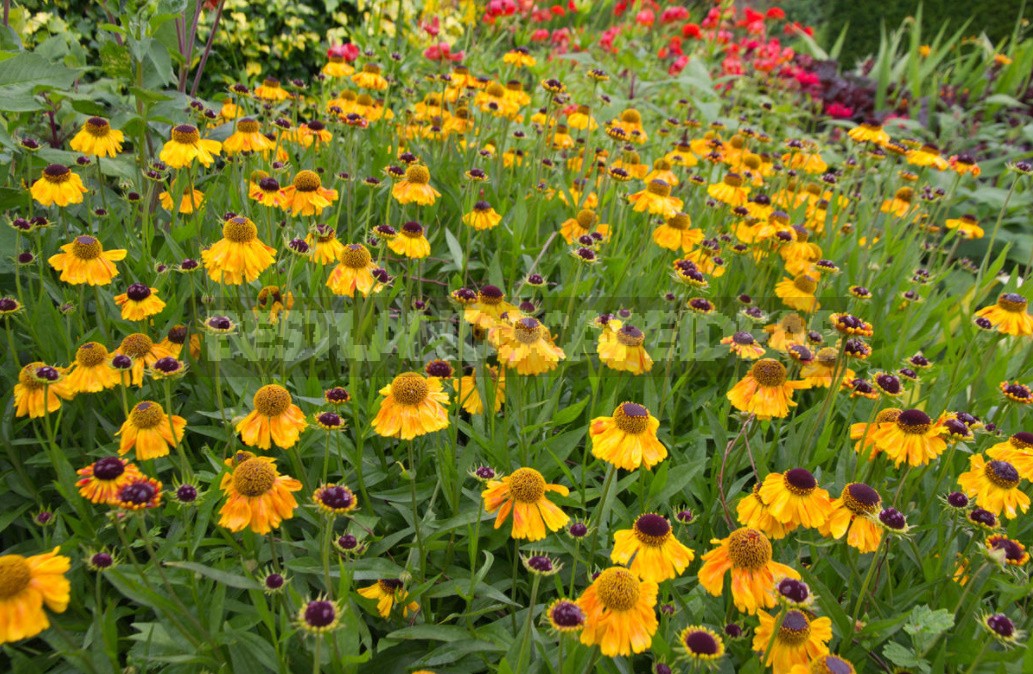 Varieties with “rings” from the peculiar color of the petals (‘Königstiger’, ‘Biedermeier’) should also not be too distant from the observer: at a great distance, fancy rings will not be visible, they will merge into one spot. And varieties with strokes and strokes (‘Chelsey’, ‘Indianersommer’, ‘Kokarde’, ‘Mardi Gras’), on the contrary, look most advantageous at a distance, forming a single color spot, which is a mixture of strokes and background, unusual and special. 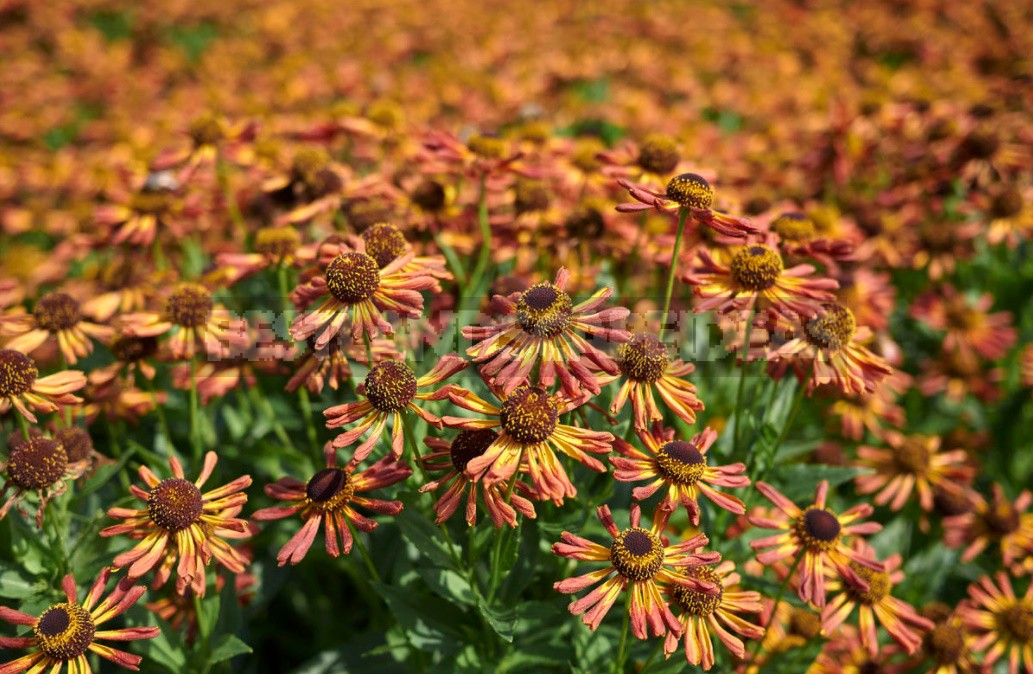 The varieties differ slightly in terms of flowering time, but this also allows you to extend the flowering season (from the end of July — ‘Goldfuchs’, ‘Lichtgöttin‘’, from the first decade of August — ‘Herbstrot’). You can prune the plant in June (removing the upper third of the shoots and thus stimulating tillering, as well as more abundant and later flowering), and the parade of flowers can only be disturbed by the frost that broke into the autumn morning. Birds are interested in withered heads, or rather, seeds. If you visit the garden in late autumn and you enjoy watching the frost and the first snow on the stems that have recently filled your garden with color, you can remove them — or you can just leave them. 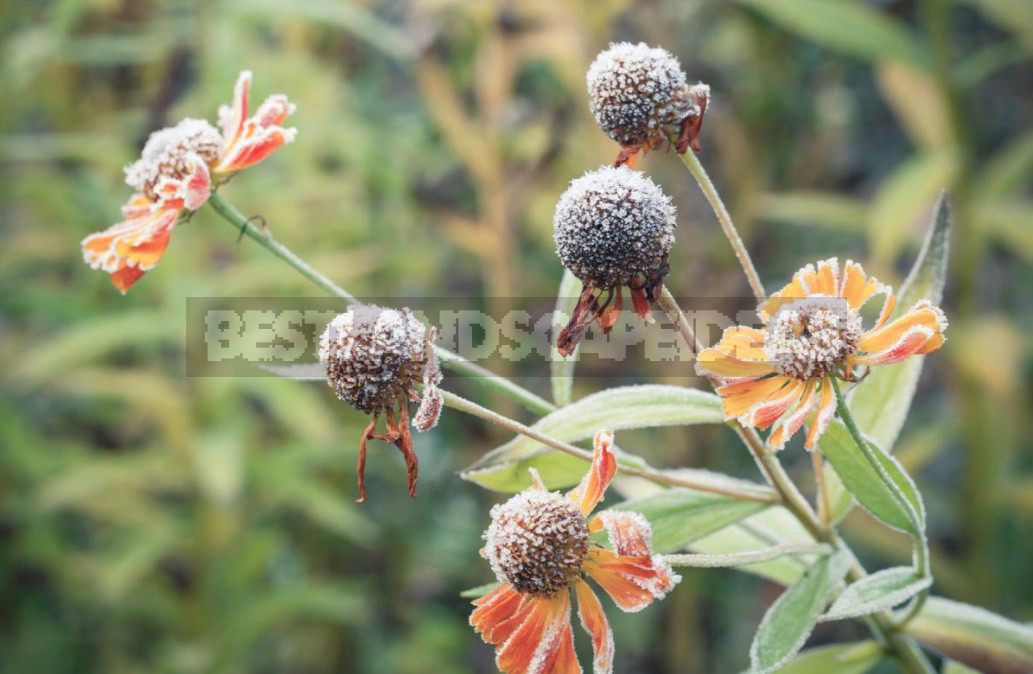 Perennial Helenium: How to Plant and Care for (Part 2) 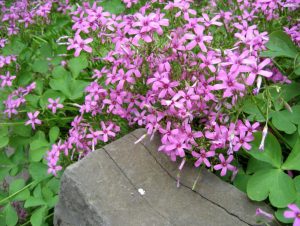 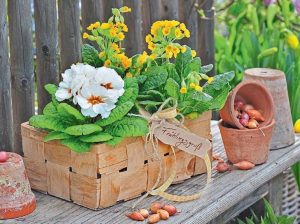 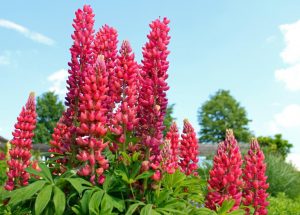