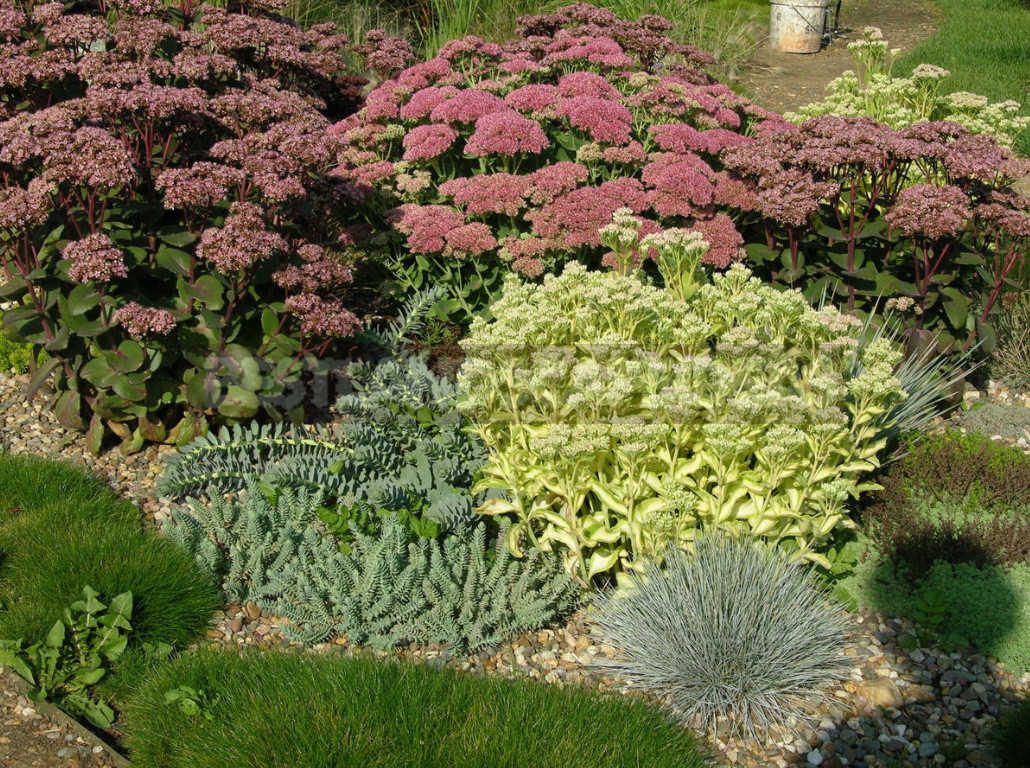 Gardeners love the big plants. They make their own way to the sun in the wilds of weeds, they can be left with a calm heart unattended for a week, two or even more. So first — about the largest (40-70 cm tall), which can be equal elements of any flower garden; some of them are just perfect as borders.

This group can include varieties and hybrids of Sedum telephium, S. spectabile, S. erythrostictum = S. alboroseum, and S. aizoon.

A variety of natural forms Sedum teléphium widespread in Eurasia, were the source of many varieties, including hybrid. Their leaves and stems are usually purple, and the color of the flowers varies from cream to crimson. 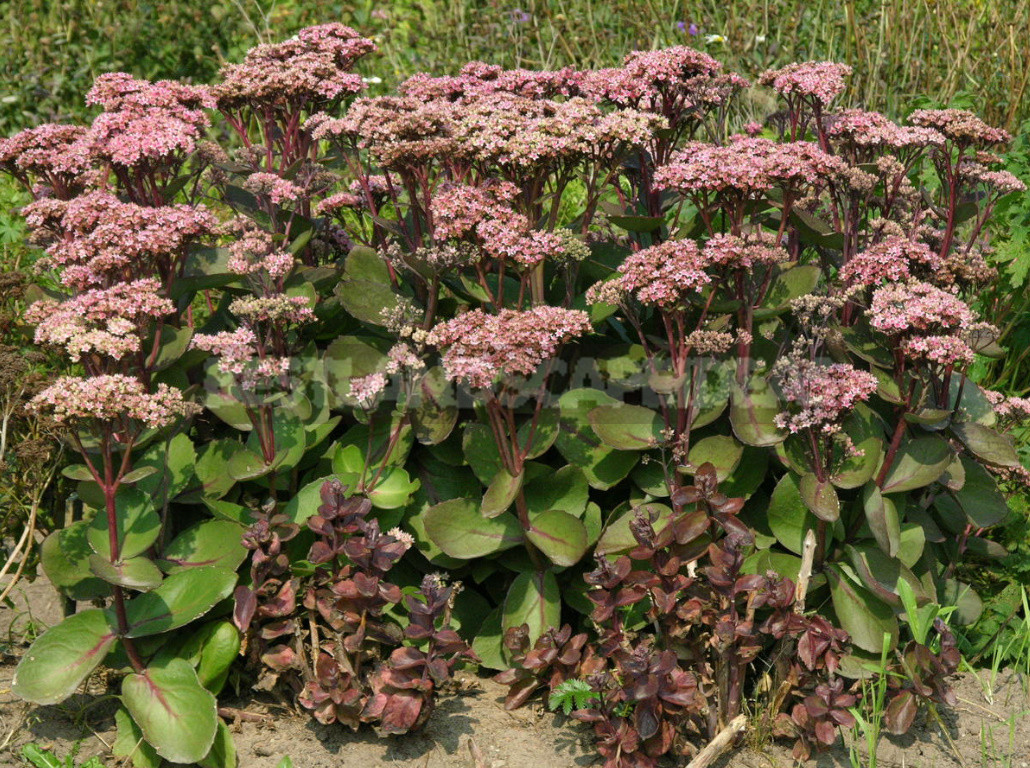 A few years ago, one of them — ‘Matrona’ – made a splash. It is really impressive and fully corresponds to its name and appearance and behavior. Stately and tall, erect, not sprawling; it takes sheet until late autumn, which is characteristic of not all Sedum (many varieties grieve at the end of the season bares bottom stems). ‘Diamond Edge’ is its variegated form and differ only by the creamy edge of the sheet. 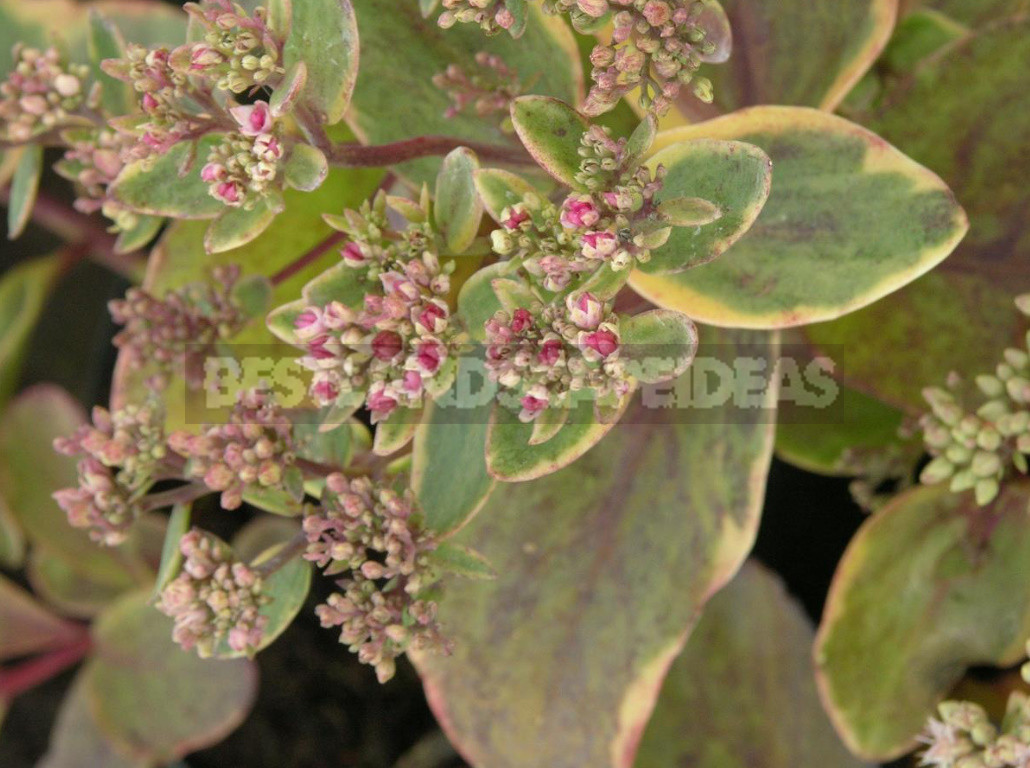 There are other variegated: ‘Samuel Oliphant’, for example, or ‘Lajos’.

A whole group of hardly distinguishable varieties suffers from an overabundance of anthocyanin: they are red-brown, crimson, almost black. Relatively low and does not affect life force ‘Matron’. The most common ‘Purpur Emperor’. From a particularly dark can be called ‘Black Jack’, ‘Picolette’, purple-brown ‘Xenox’, blue-purple compact ‘Postmans Pride’.

READ  Aconite Will Decorate Your Garden 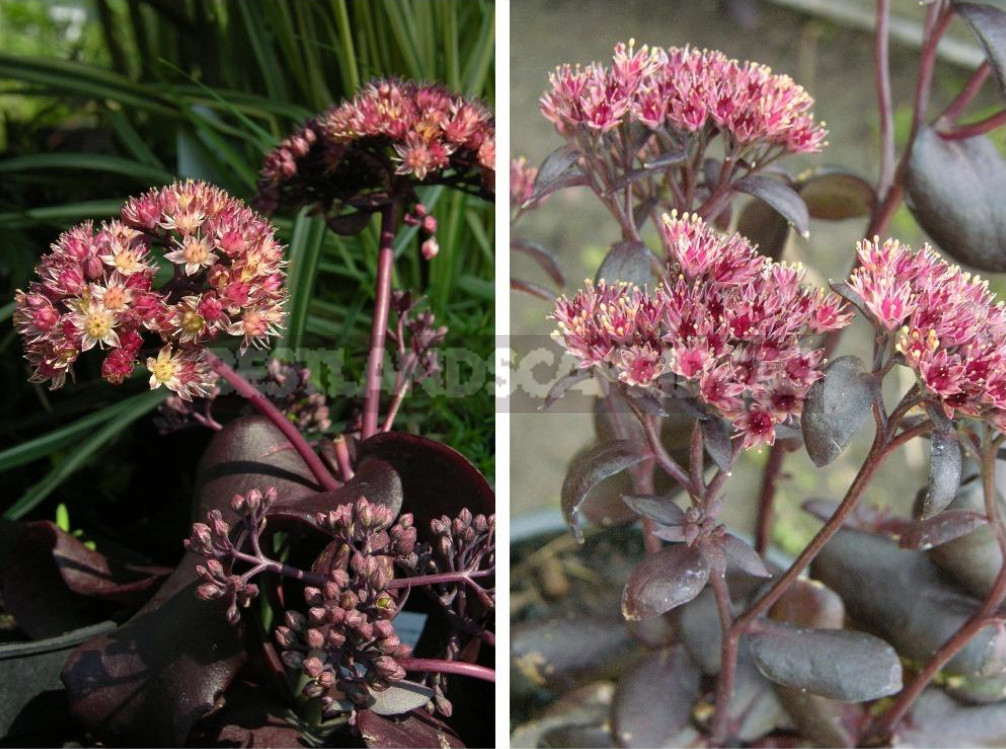 Many named forms (‘Gooseberry Fool‘,’ Jaws‘,’ Strawberries and Cream’ and others) combine green leaves with flowers of different colors. By the way, the color of Sedum flowers can vary depending on the weather from cream to pink. Among these varieties is the leader in popularity ‘Autumn Joy’ (‘Herbstfreude’) — really autumn joy for bees and bee-flies. 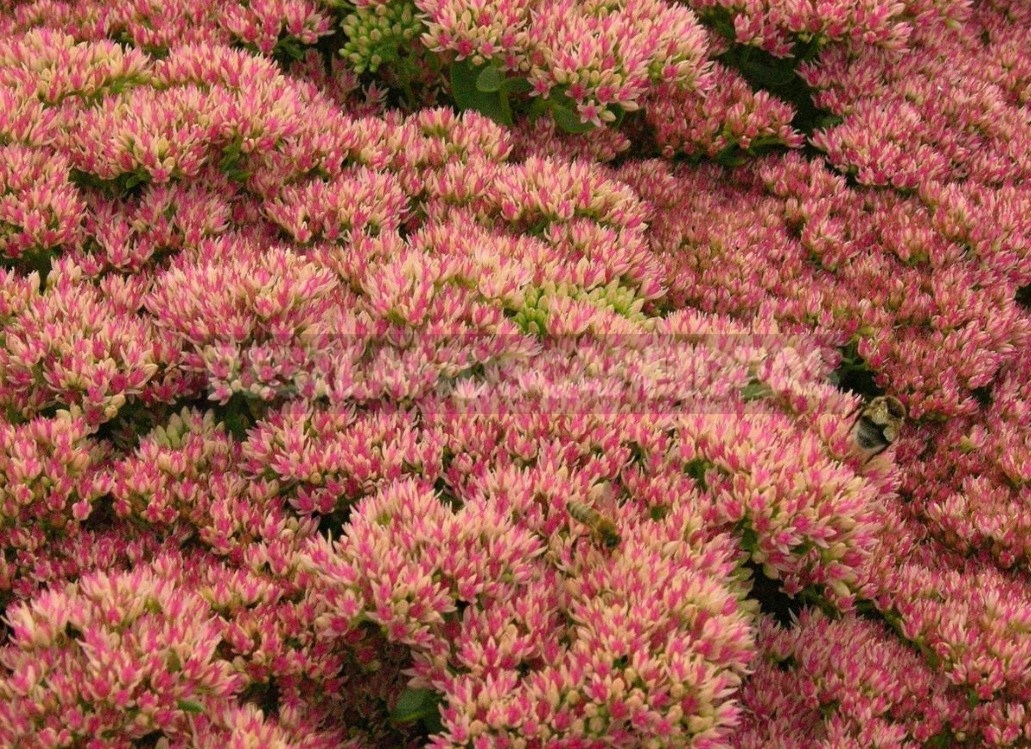 For the collector of greater interest are peculiar varieties. For example, ‘Citrus Twist‘ and ’Green Expectations’ with greenish-yellowish flowers. ‘Garnet Brocade’ (‘Garbro’) is original due to the narrow leaves with a crimson vein and loose paniculate inflorescences of bright pink. The advantage of ‘Crazy Ruffles’ are toothed leaves with wavy edges, but it seems that this feature is lost as it develops. There are low, semi-lying varieties-grayish-green crimson in the sun ‘Ruby Glow’ and ‘Bertram Anderson’ among them.

A visitor from Northern China is pretty bored with us, meeting in abundance in the city flower beds. Dense smooth borders, decorated cakes dirty-pink blossoms are perfectly urban style with its straight lines and rough shapes. It is difficult to say that enjoys the love of urban landscapers – some old varieties or wild form, which is also quite common — but they use the reserves of this species is not completely, and for the suburban area it offers quite a lot of interesting things. 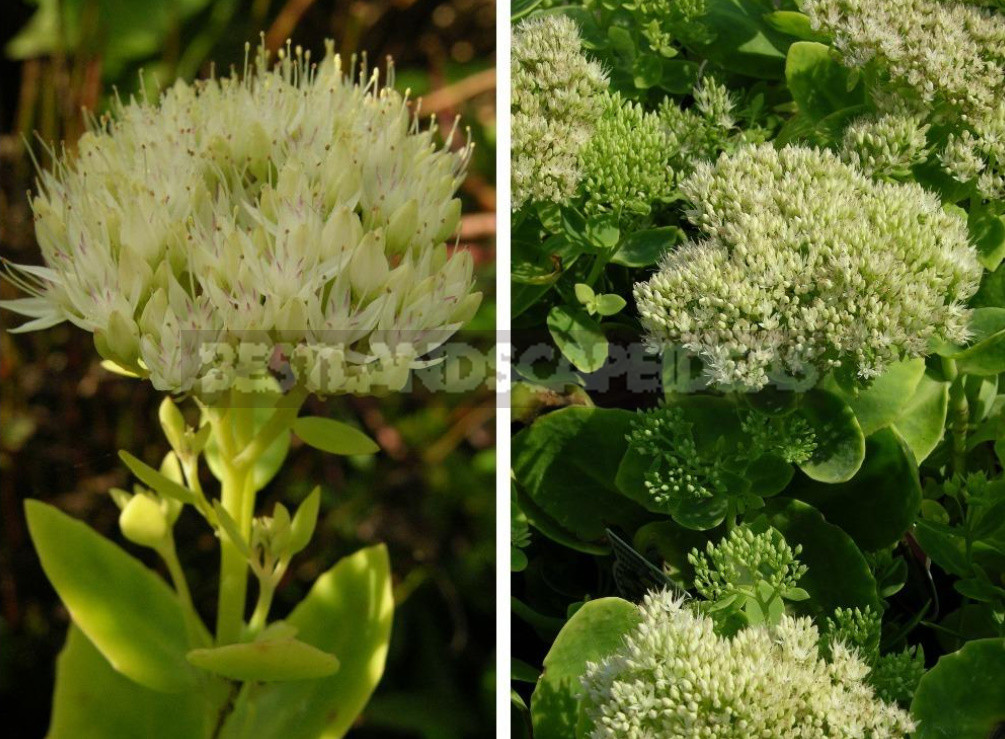 Attractive white ‘Stardust’ and ‘Iceberg’. Especially the latter, the most powerful, which retains the leaves for a long time and does not expose the stem.

Rosaceae differ in growth, shade of flowers and leaves, although the descriptions are difficult to understand all the subtleties that become noticeable when grown together. Can be called old-fashioned ‘Brilliant’ and ‘Rosenteller’, ‘Autumn Fire’, with greyish leaves, dark pink ‘Septemberglut’ bright ‘Carmen’ and ‘Meteor’, and the brightest, as they say, ‘Neon’.

READ  Forest and Field Plants in the Garden: Geranium 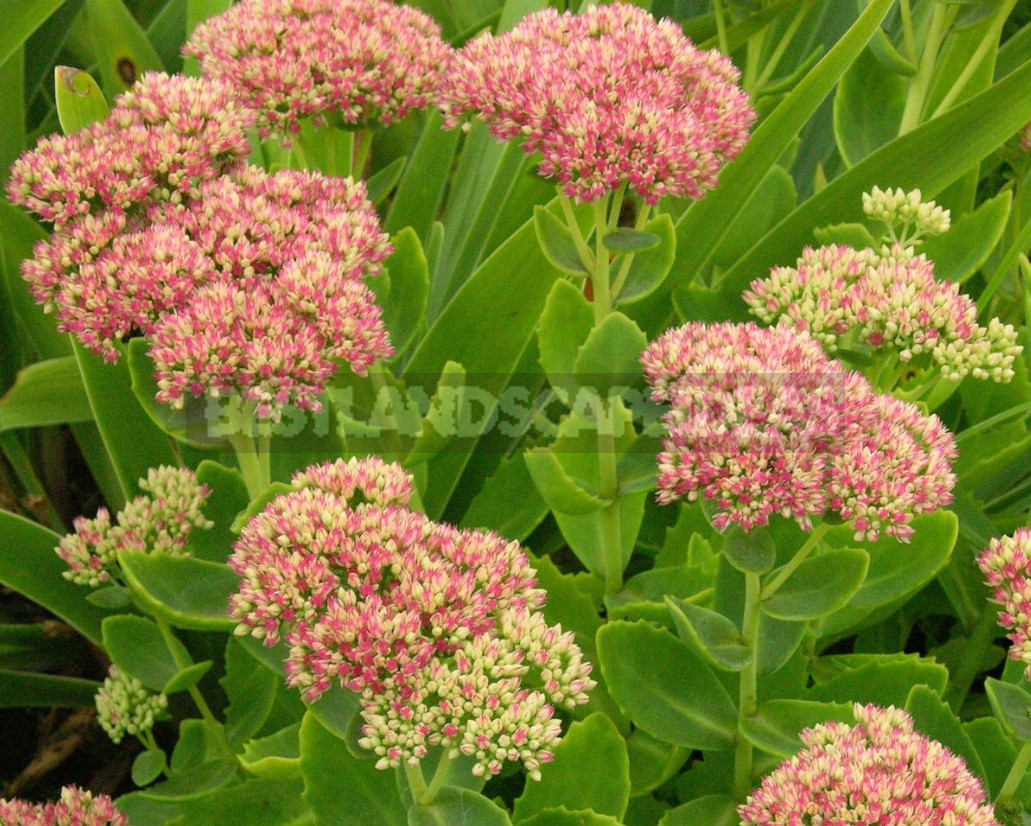 Sport from ‘Brilliant’ – ‘Pink Chablis’ bears gray-green leaves, decorated with a white border. An example of the fact that “new” does not mean “better”, it can give in the spring completely white chlorophyll-free and non-viable shoots. Our copy is limited to this and died, exhausted (and wept a lot). 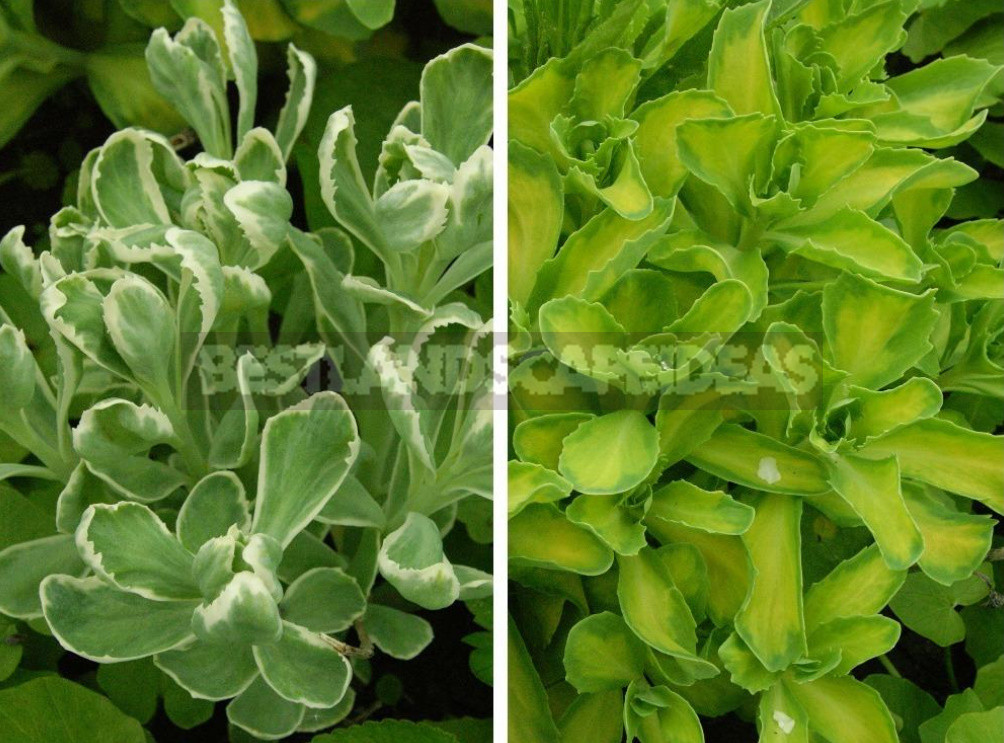 About Sedum could be a long time to spread, but the limit of space is exhausted. So what about the rest of the thesis. 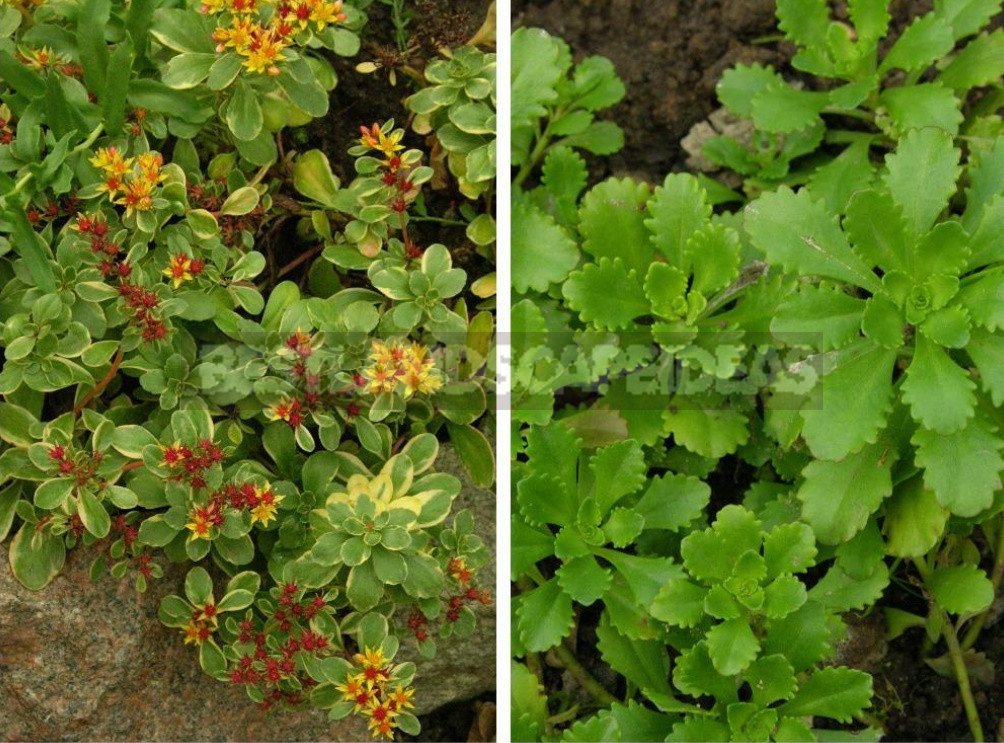 For flower beds suitable low, but powerful creeping species and their varieties: 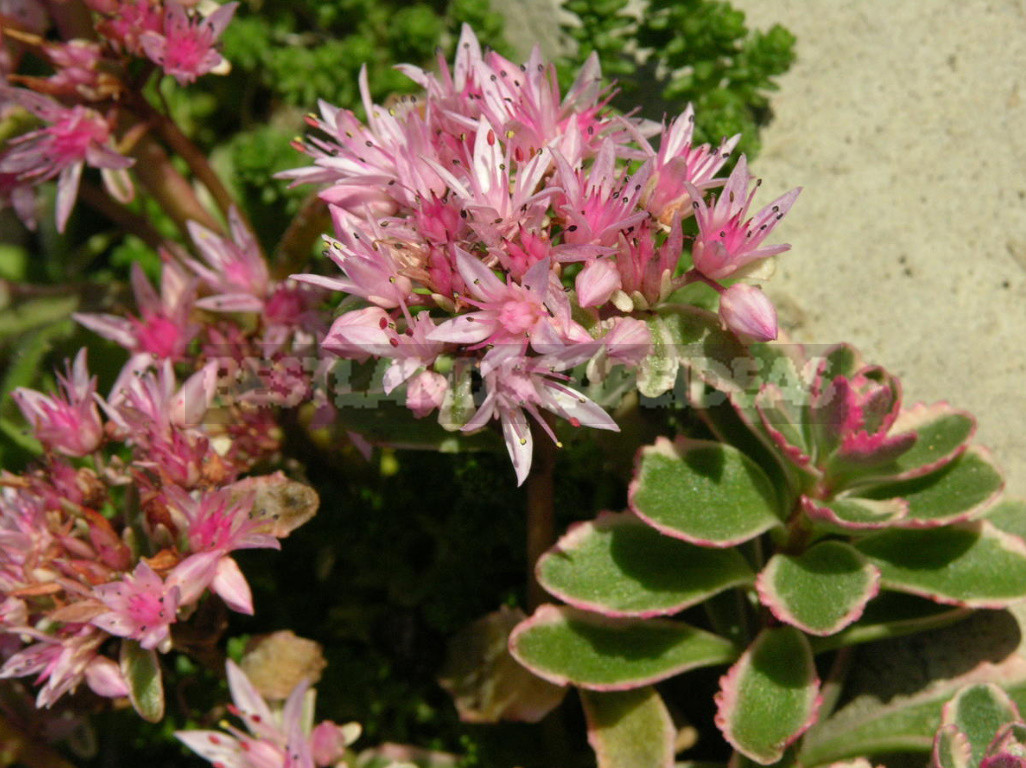 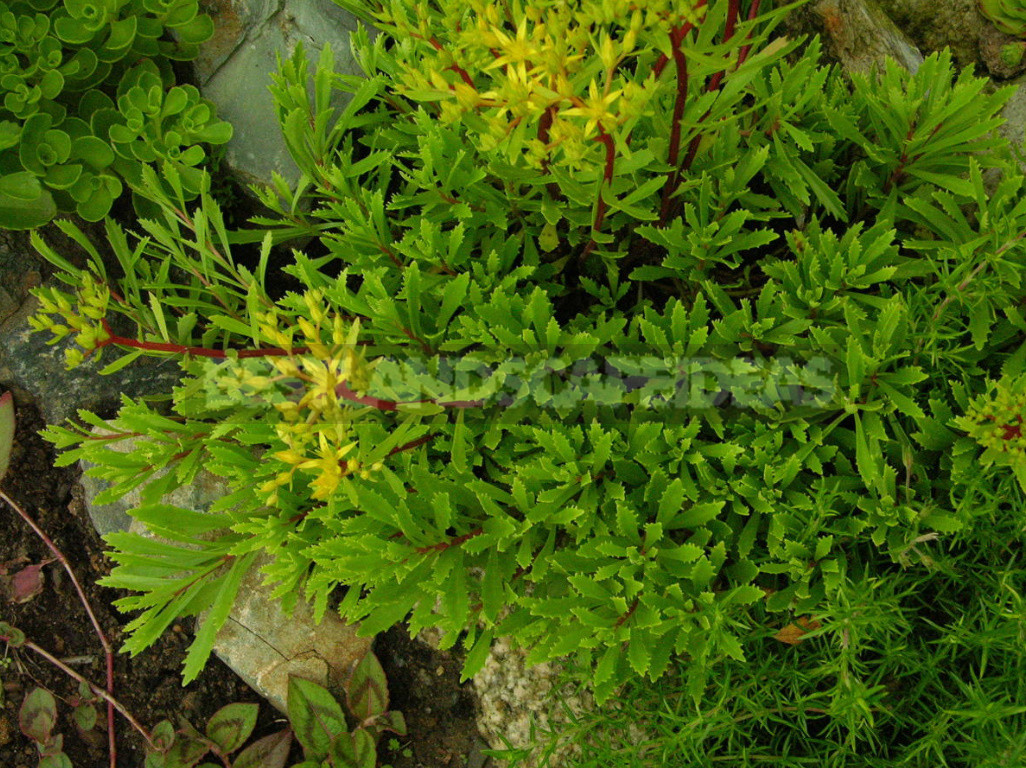 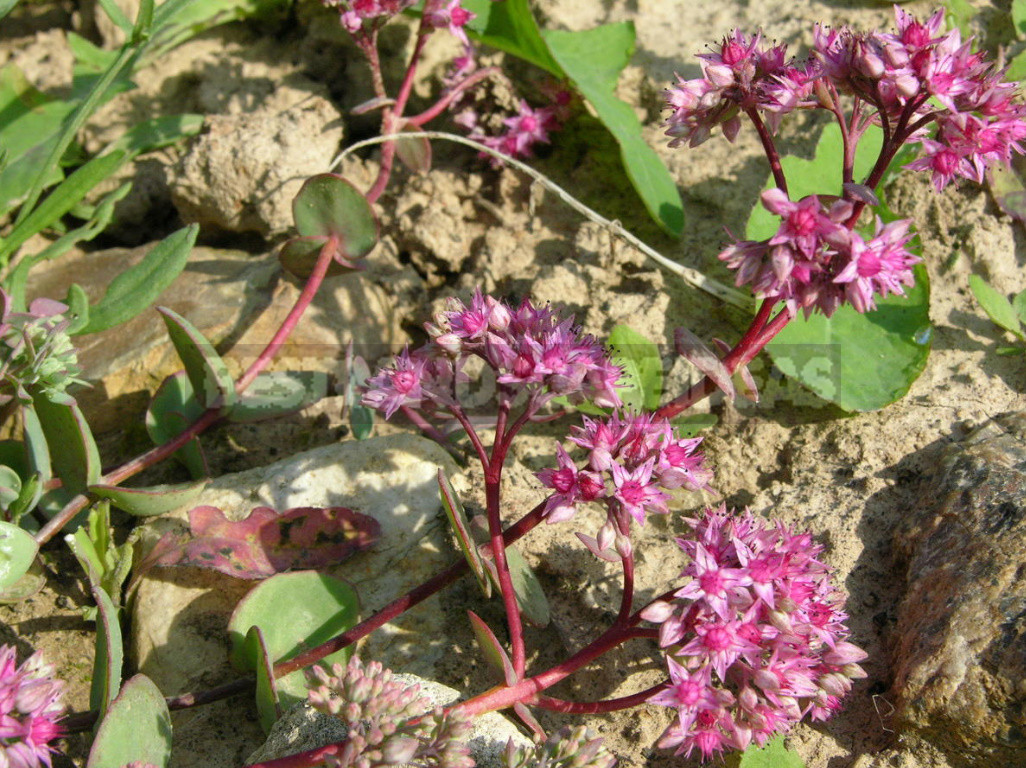 For the lover of hard work — lawns of small and nimble Sedum, such as: 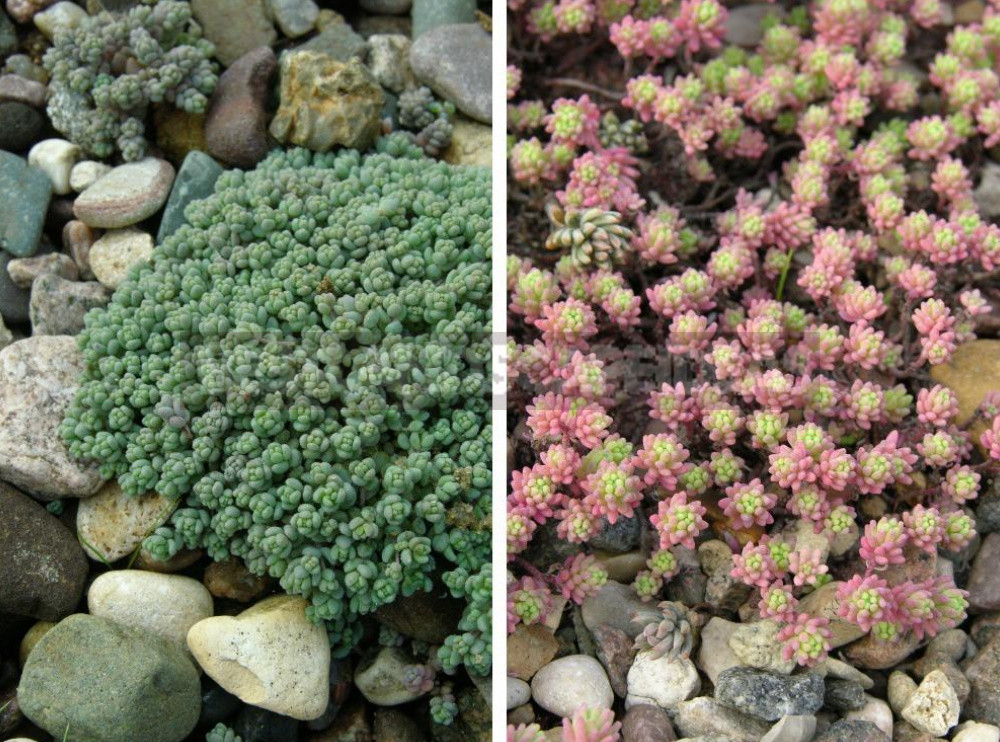 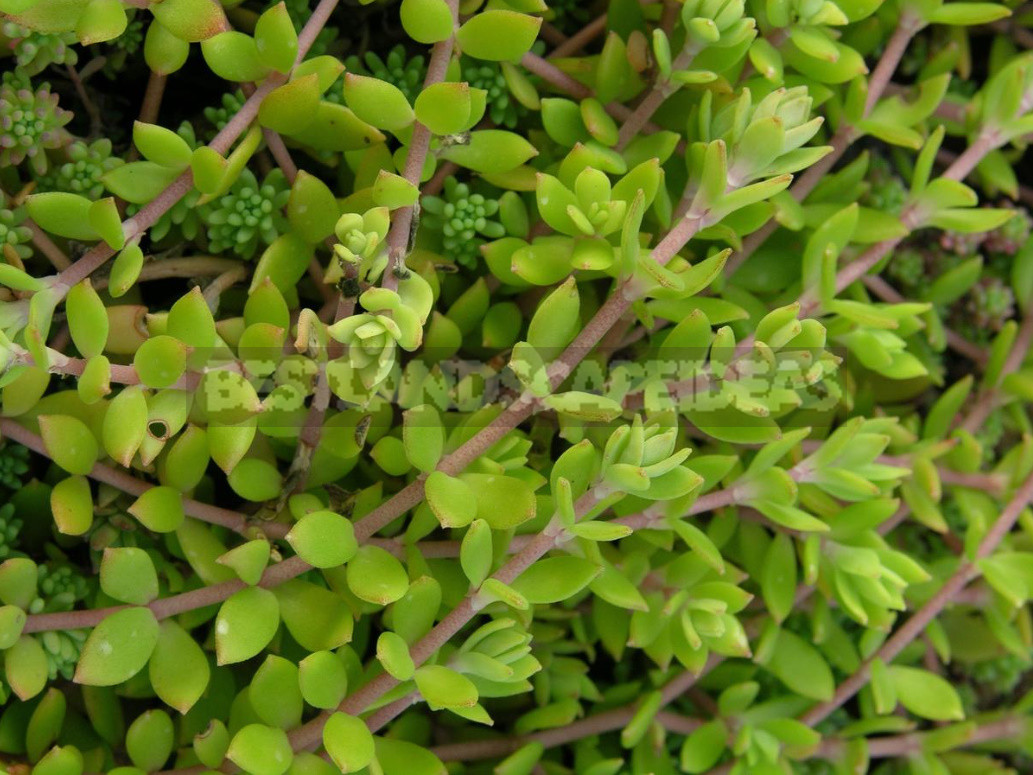 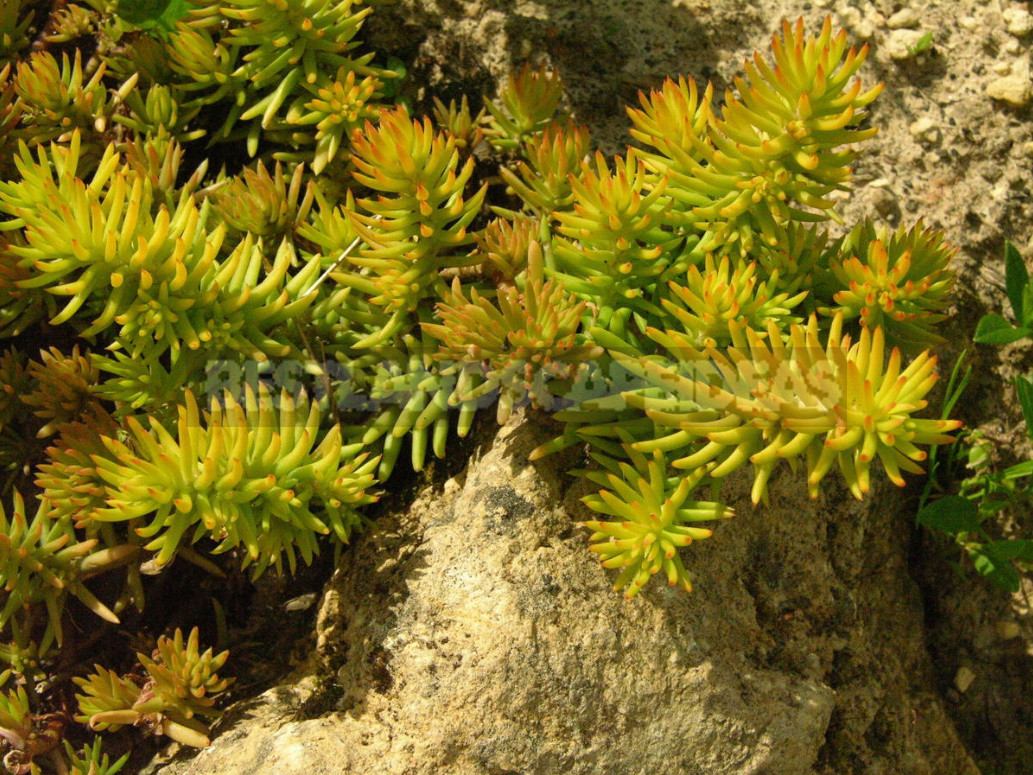 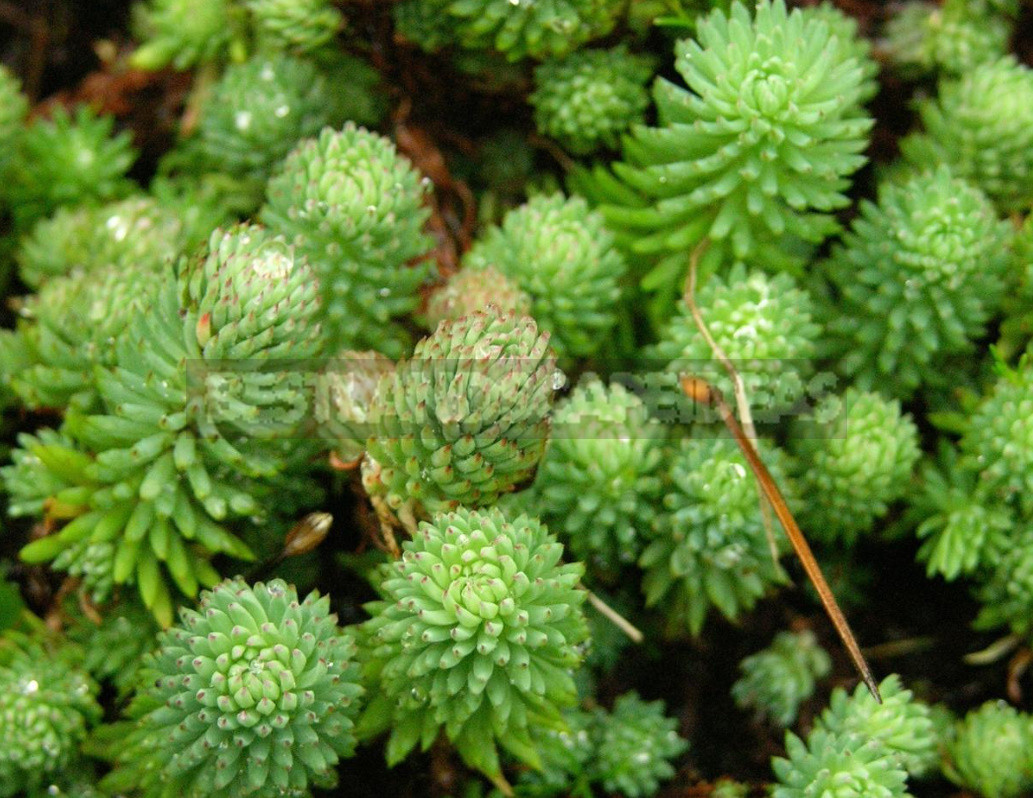 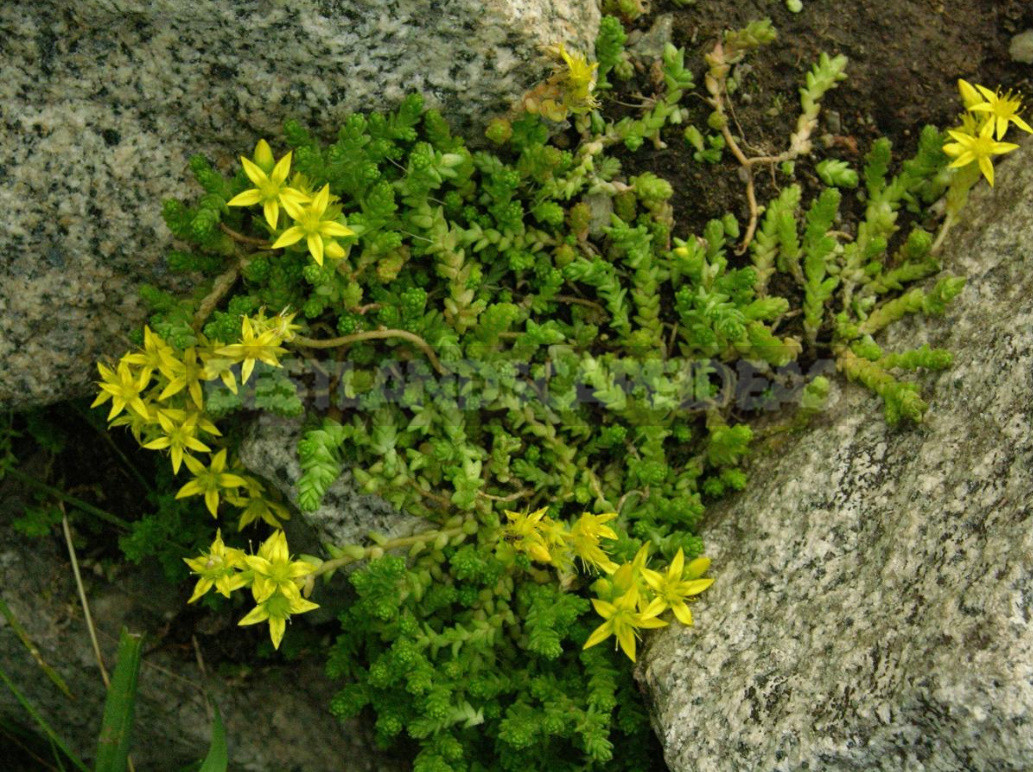 Moreover, S. stoloniferum easily withstands shade under the trees. And varieties S. album, S. acre and S. sediforme grow on anything, just not on the asphalt. 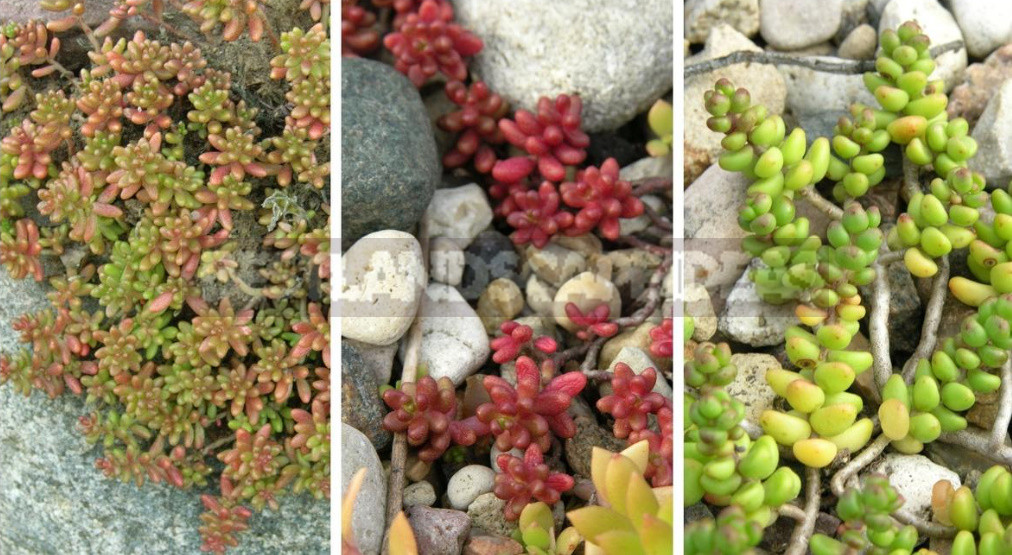 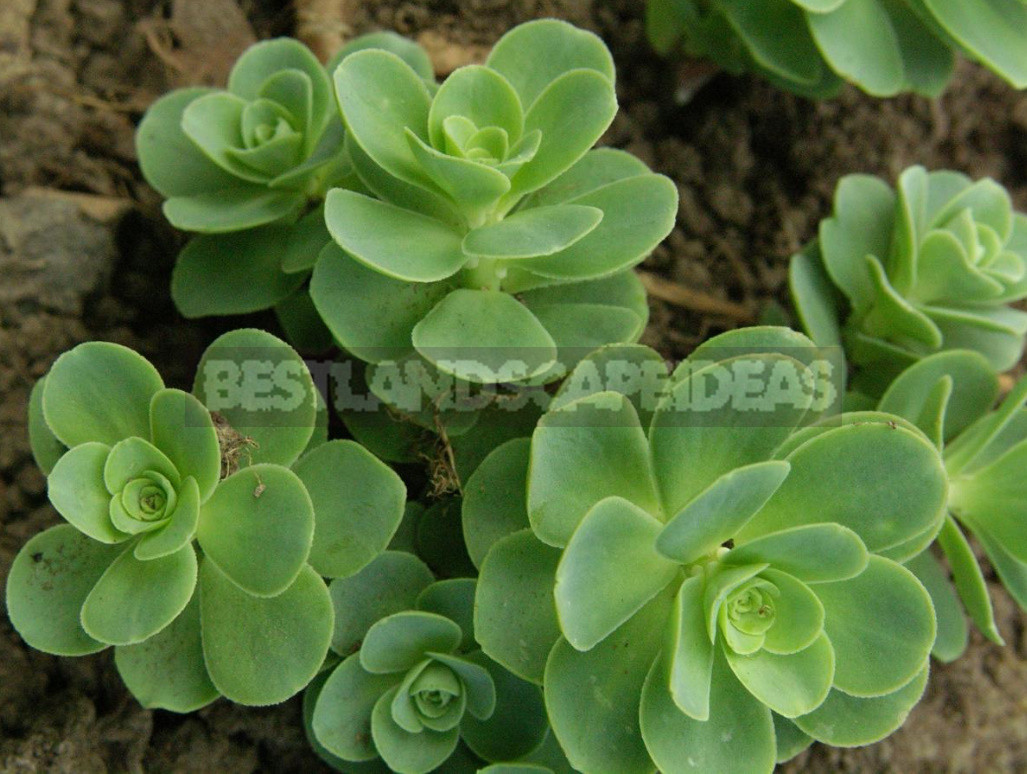 Where else can you keep absolutely microscopic varieties ‘Faro Form’ and ‘Micranthum’, ‘Lilac Mound’ or ‘Minus’?

READ  Natural Species of Gladioli: the Perfection of Natural Beauty

Gerbera: Growing, Care, Varieties and Disease Prevention.
Three Reasons to Plant Cichorium in the Country
How to Grow Heuchera From Seed
These Unexpected Cereals: Beautiful And Also Edible