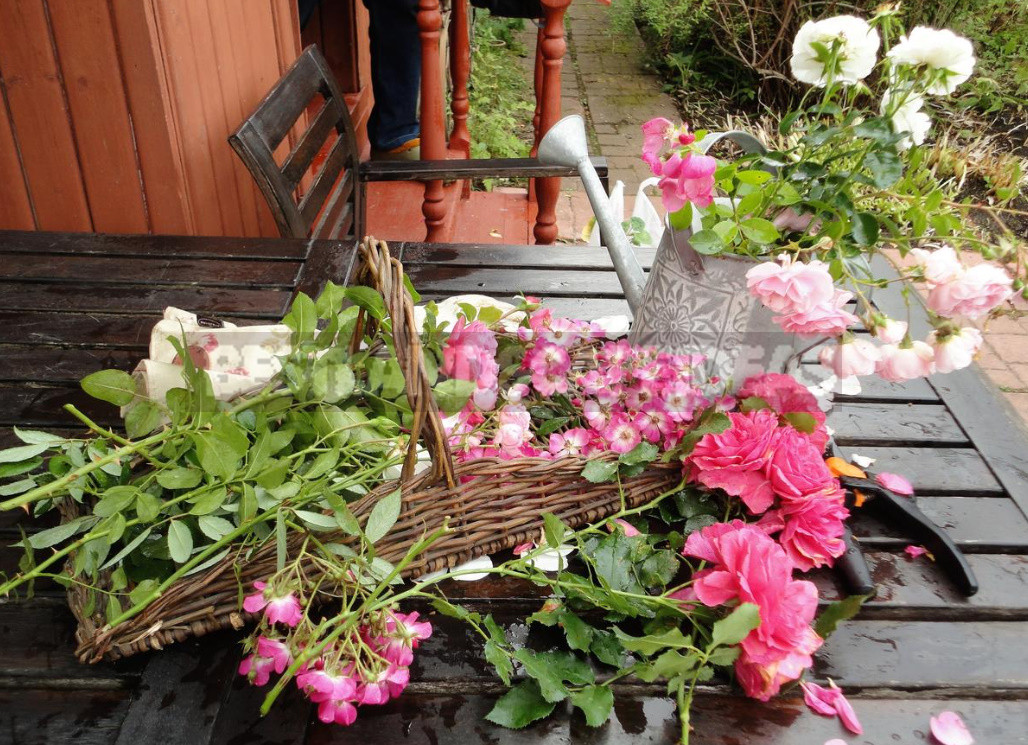 We continue to talk about the preparation of the rose garden for winter. In the harsh climate of the roses spend in the shelter. On how well we take care of our Pets, will depend on the success of wintering. Sometimes it’s a pity to send our gorgeous roses to forced imprisonment, but we have no other choice.

In the previous publication, I stopped at the fact that roses in the dry season must be tied and bent to the ground. Pre-cut tops are not ripe English, groundcover and musk roses, and remove flowering shoots from the buds. 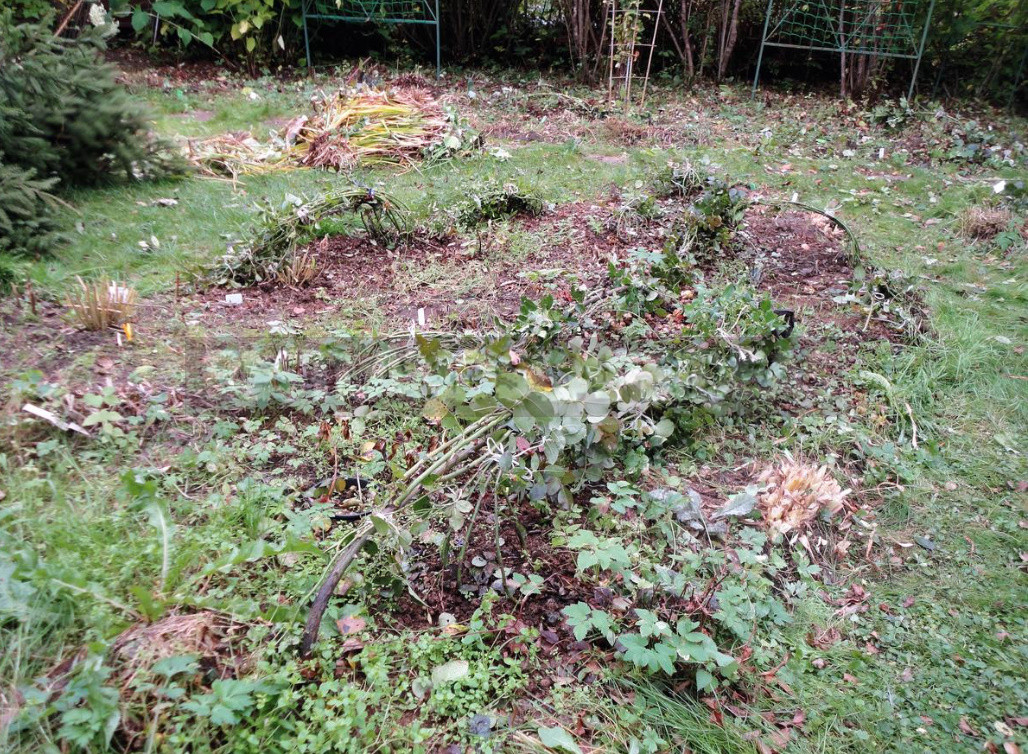 For the convenience of shelter tea-hybrid roses and floribunda shortened to 40 cm in climbing roses-Ramblers cut part of the shoots, leaving 7-8 of the strongest, which will bloom next year. Put them on some dry surface – a sheet of plywood, boards.

Before you cover them thoroughly, pre-throw the film, so as not to get wet from the rains. Before you bend, spray 4% solution of iron sulfate (not to be confused with copper!) is an effective remedy against rotting. Divorce is usually a standard package of 200 g per 5 liters of water. Moreover, not only the plants themselves are processed, but also the land around.

From the rose garden carefully removed had time to fall sick leaves (source of disease) and sent to the fire. The rest of the foliage is left, contrary to existing recommendations to remove it. I strongly object to this procedure. And here’s why. First, in the presence of a large rose garden, where sometimes grows at least a hundred roses, it is physically impossible to do. 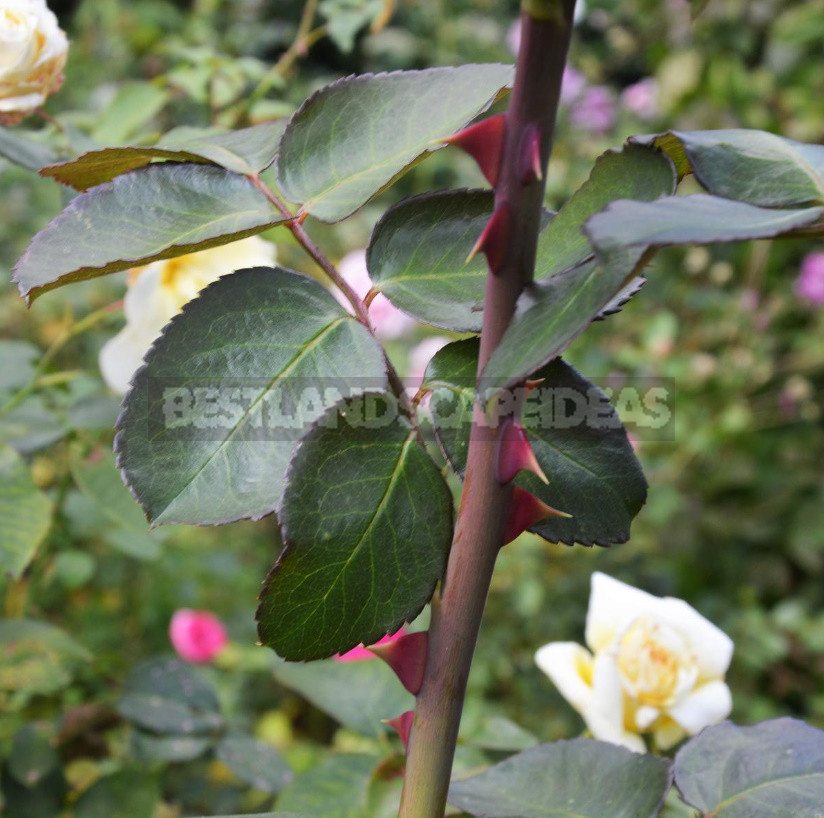 Second: when pruning the leaves is easy to damage the tender skin of the shoots, which will penetrate the infection. But most importantly – the leaves of roses continue to participate in the process of photosynthesis, giving all the necessary roots of plants. This continues even in shelter under scant rays of light, which pervade there (if used translucent lutrasil). To deprive them of such an opportunity is to weaken the plants.

It is noticed that those roses that have lost their leaves as a result of black spot disease, winter much worse and die more often. Therefore, the main task is to keep the leaves to the last. And in the spring they will fall away, and you will quietly collect them. 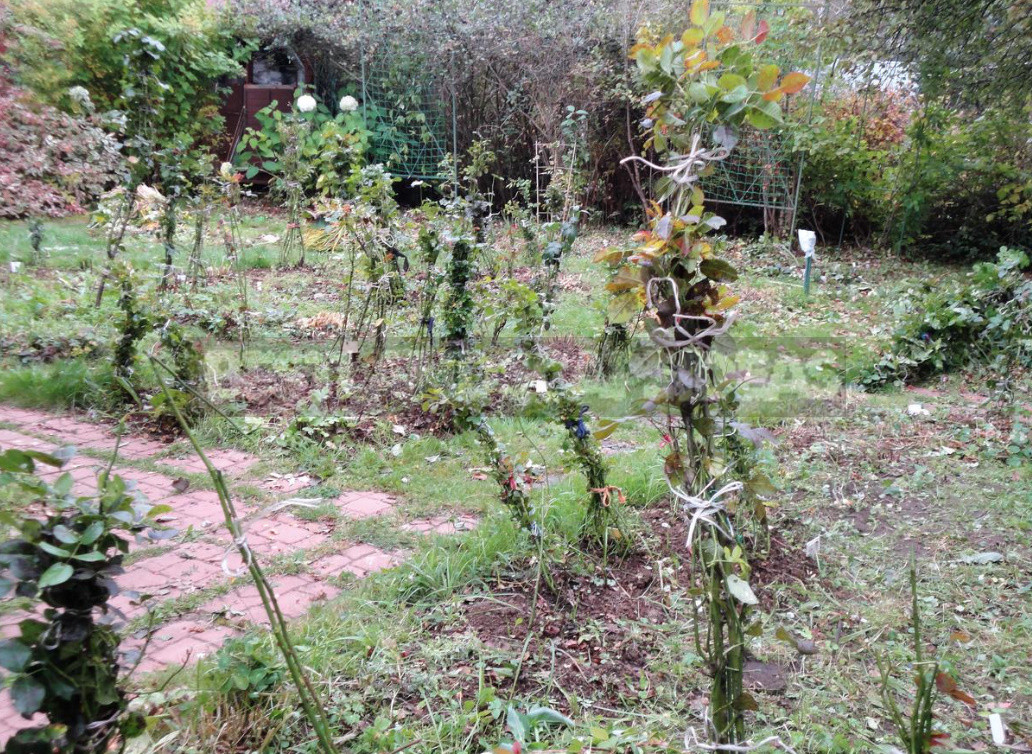 Another controversial issue is whether to fill the necks of grafted roses. It is believed that in the autumn it is necessary to do this to prevent their freezing. In my opinion, it is better to leave everything as it is. To rake the earth around means to bare roots, it is inexpedient. Fall asleep compost dangerously, so as in it continue biochemical processes. This is an active microbiological environment in which infectious burns develop. By spring, the stems of composted roses will be ringed with brown spots, the stems will have to be removed and well, if the rose does not die. 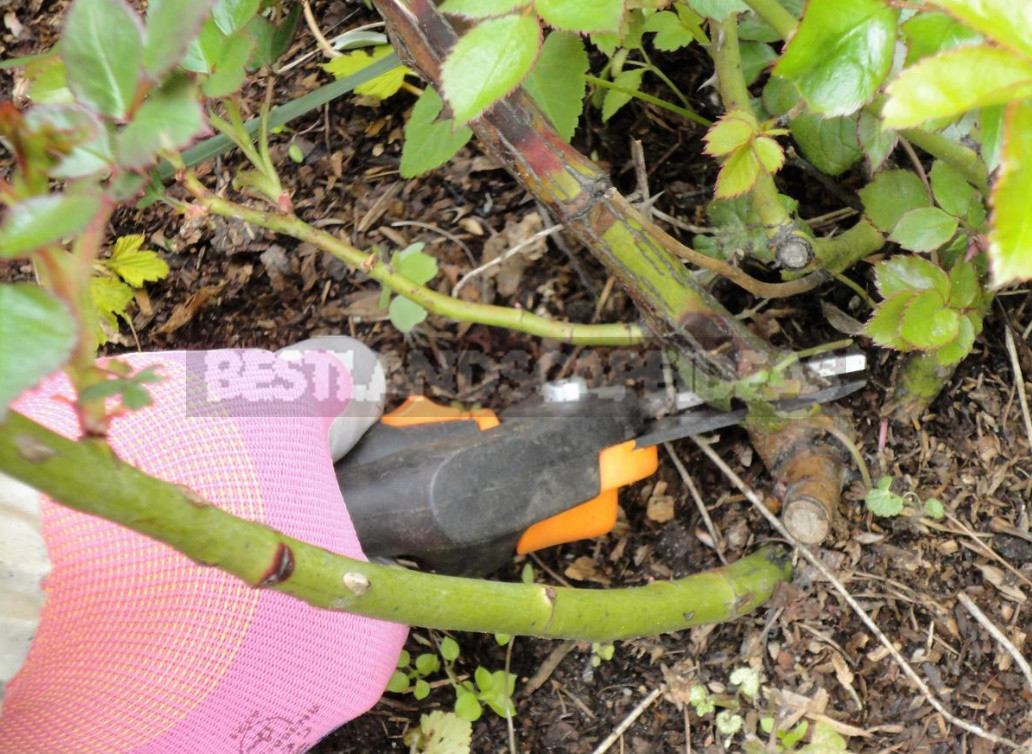 Even worse to use for this purpose manure, even rotted. My neighbors once covered their roses up to half the height with manure to keep them”warmer.” The result was sad: in the spring the plants turned black, the whole collection was ruined.

Peat, because of its high water capacity, also should not be used. From frosts it strongly freezes, the rose will appear in ice captivity. The sand is very cooled and is also not suitable. Advise to fall asleep with dry earth, however by the law of communicating vessels it all the same on capillaries inevitably becomes damp. I’m in the beginning of practice, following the advice of experienced growers even harvested dry land in boxes and chests. However, the result disappointed me — all this is pointless.

Prepared roses, as already mentioned, at the preliminary stage, hide in a tent made of polyethylene film, leaving the edges free, which are rinsed in the wind. In this shelter, plants are not afraid of any autumn rains, roses are ventilated, excess moisture is removed, since the fundamental condition of preparation for winter, once again, is that the plants are dry. 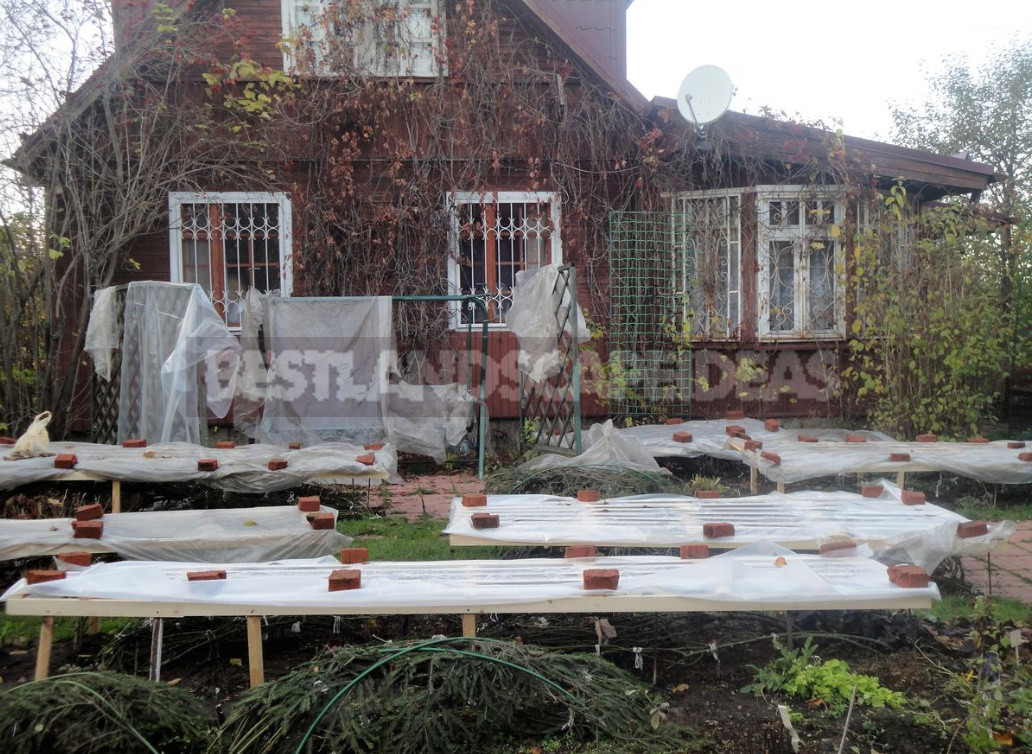 Friendly advice: if you have a lot of roses, do everything in stages. Have prepared a dozen of the plant – cover, and then go on to the other. This should be done because of the unpredictability of the weather. We were taught this by an incident when we prepared our rose garden for final shelter, and the next morning it snowed.

In the old gardens of roses traditionally sheltered spruce branches. This natural material, thanks to numerous needles, creates a kind of air “coat”, which retains the heat coming from the ground. It is important that this coat also “breathes”, which prevents the processes of decay.

In addition, needles-a wonderful aseptic material. Under the spruce branches, covered with snow drifts, roses feel great in the cold and during thaws. 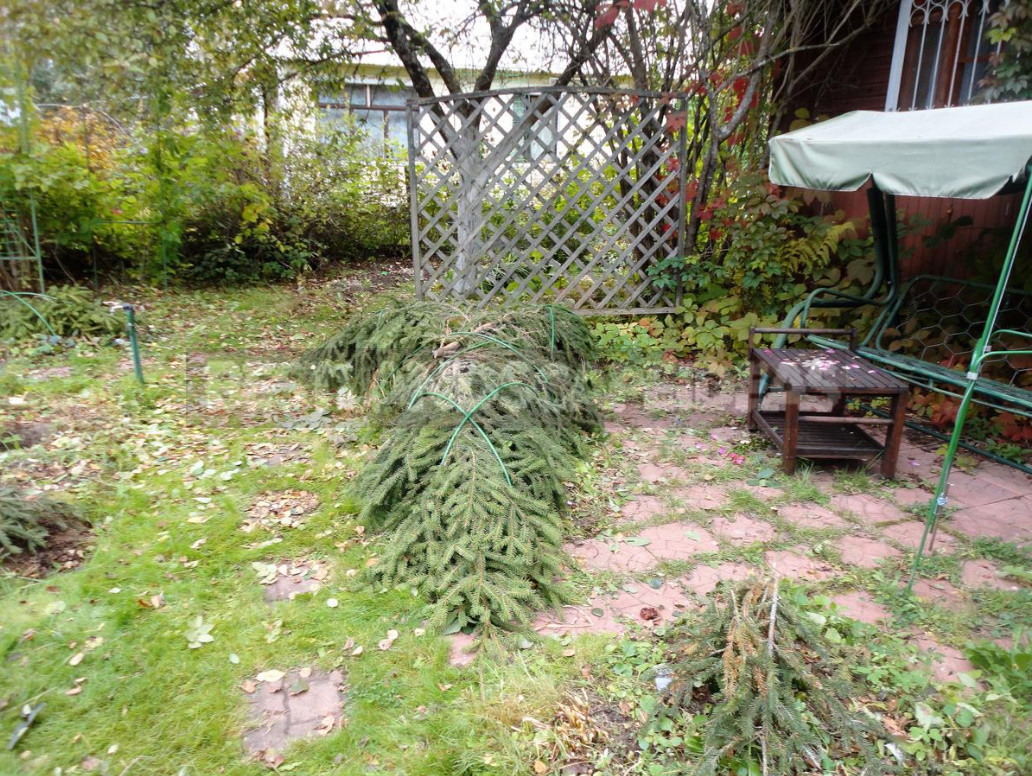 However, in recent years to get hold of spruce branches, as in the old days, it is becoming increasingly difficult. Coniferous forests are destroyed by hectares of beetle-typographer, it was just a natural disaster. If you’re lucky enough to find a tree that just fell, consider yourself lucky. And in all other cases, harvesting spruce branches should be stopped for ethical reasons. Numerous lovers of roses should think about the fate of the forests.

Last year we were unexpectedly lucky-the neighbor cut down at himself on a site a big fir-tree, and we got a magnificent spruce branches under which our roses comfortably wintered. But it happens once in a lifetime. In other cases, it is necessary to look for alternatives. 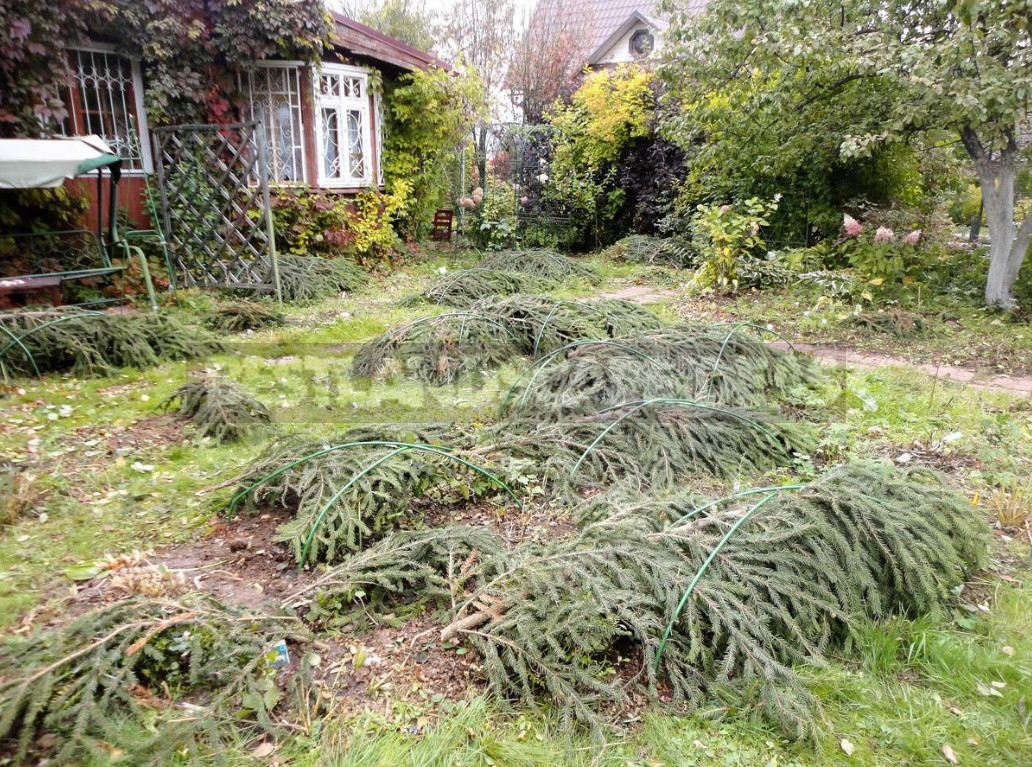 But savvy Pinkies have come up with a so-called air-dry shelter. A strong frame is constructed around the perimeter of the rose garden, on which the boards are laid, covering material is spread over them, for example, roofing material, lutrasil or spunbond. 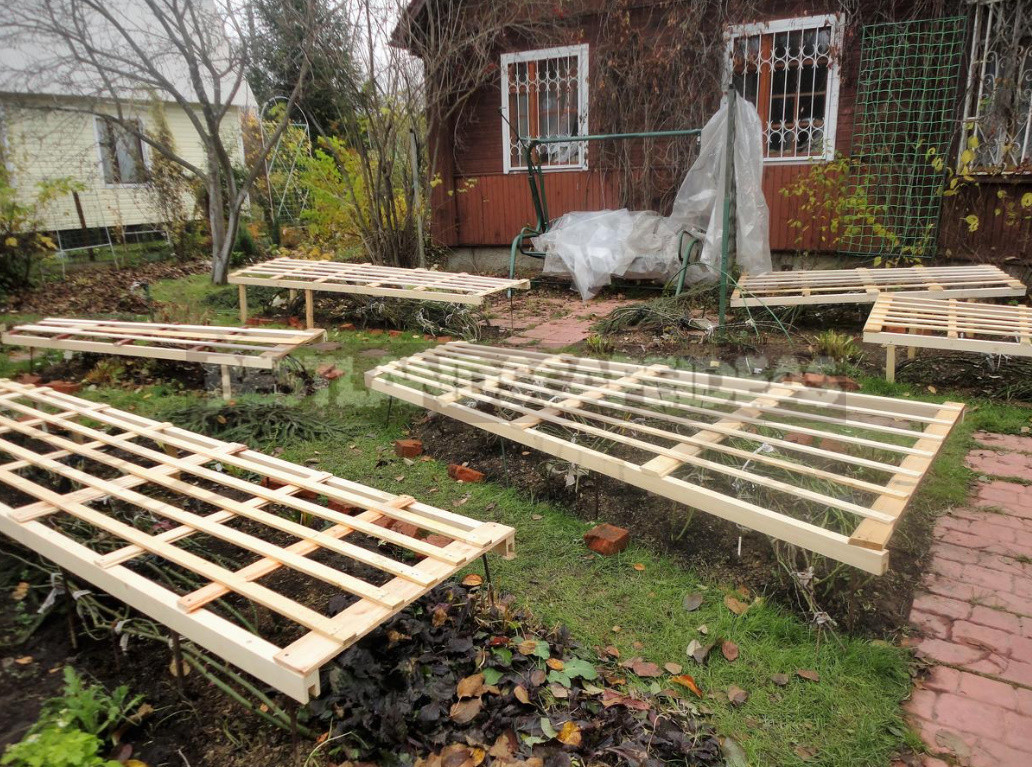 In addition to the frame is placed garden mesh with fine mesh. This is done to ensure that spunbond did not fall into the shelter under the weight of snow. Under such shelter warmly and dry. 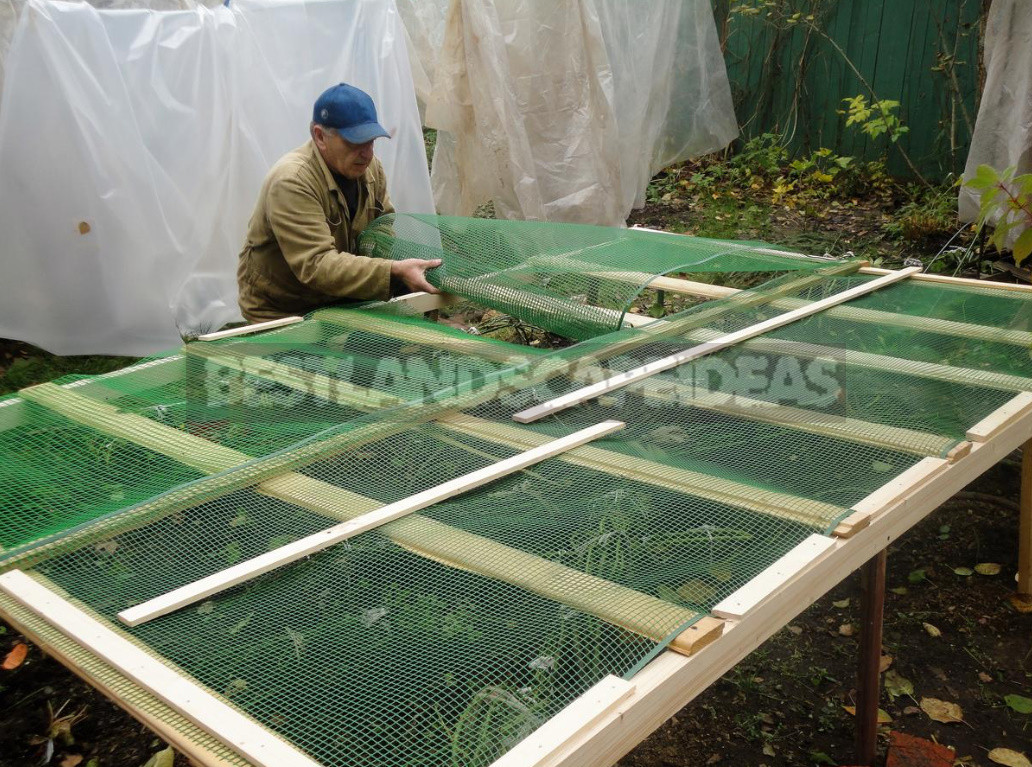 However, this method requires a compact planting of roses in a single array. Lonely growing plants will have to shelter individually. 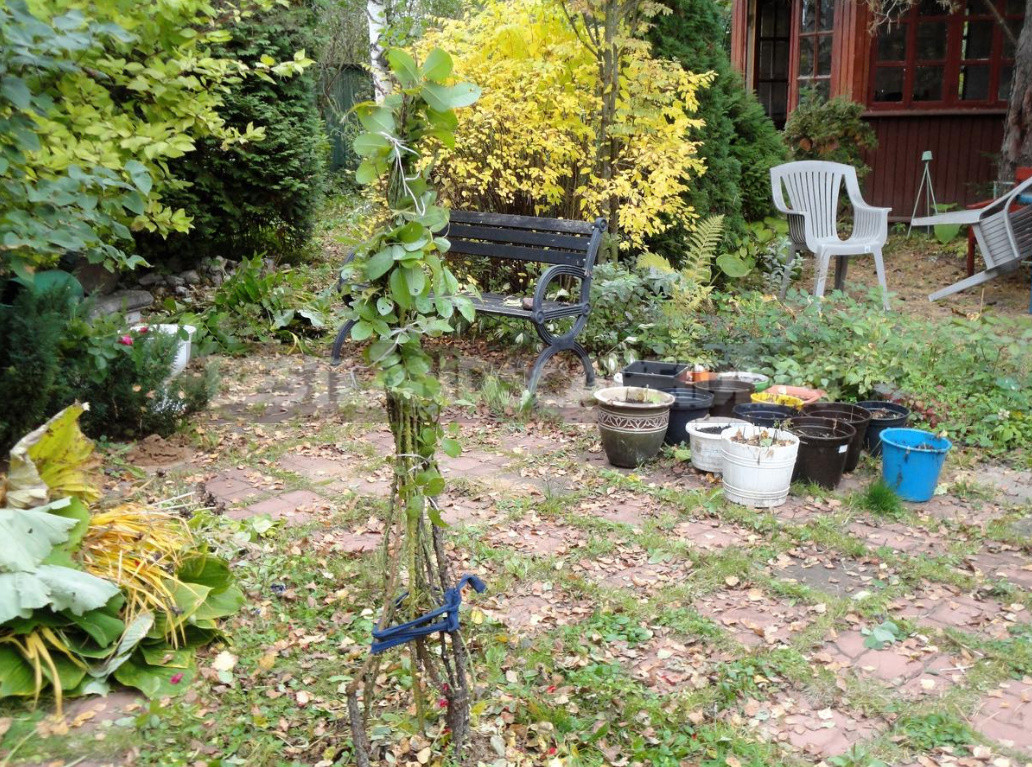 Before frosts such construction needs to be aired, removing excess moisture, for this purpose leave open end faces. And only when the temperature drops to -5…-7°C, they are closed. This method has the right to exist, but it is not without drawbacks.

Let’s start with the fact that the construction of such a large-scale structure will require certain skills and materials. A huge mass of snow per year of heavy snowfall, it can cover to break, and the roses beneath it elementary to crush. Therefore, it must be made reliable and strong. 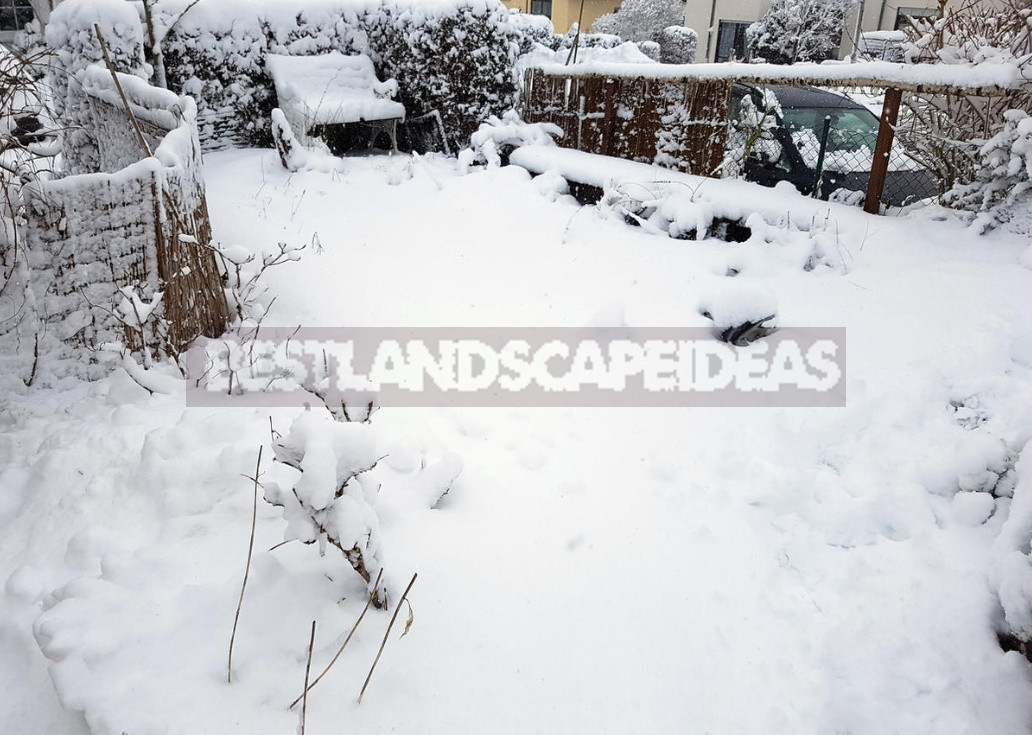 Roses are there literally in a dungeon, not receiving sunlight. By spring they become pale and tortured. When it’s time to open them, the plants can suffer from the bright spring sun. At one time we practiced this method of concealment in our garden, but in recent years we have found that the use of modern concealment technologies and materials makes the life of a rose grower much easier.

The most acceptable and affordable way to hide roses today can be considered the use of modern covering materials-lutrasila, spunbond, agril, the invention of which greatly facilitated the life of rose lovers. The density of such materials should not be less than 60 g / m².

READ  Phlox for the Collection: Choose the Color, Size, Shape, Timing of Flowering

Plants Harbor at least 2 layers waxed side up (this is important!). Under such a shelter roses “breathe”, under humidification from rains or during thaws lutrasil quickly dries up, work with him easily. The edges of the fabric must be securely fastened with bricks or boards, so that it is not blown away by the wind. Once the snow starts to fall, the roses will be in a safe and warm shelter. 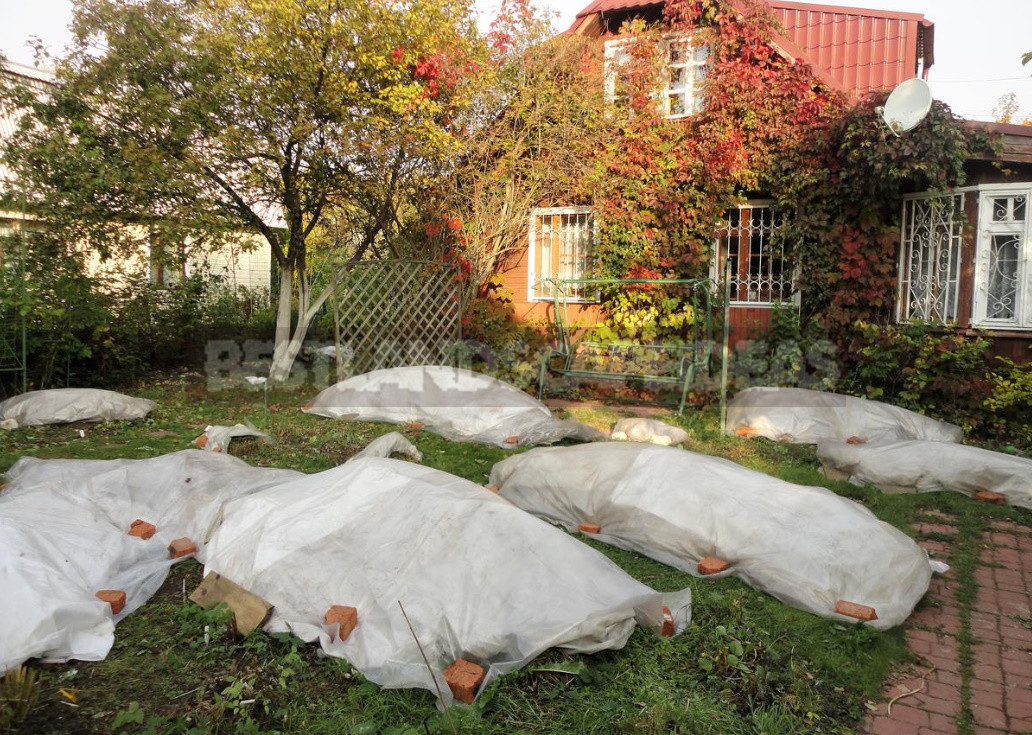 I must say that some gardeners use covering material completely wrong, just winding them vertically standing bushes. One often sees such “ghosts” in snow-covered gardens. However, this, if I may say, protection will not save rose from frost. It is known that it is not a blanket that warms us, but we are a blanket. So in this case the rose is not able to generate the heat it gives the earth. Therefore, we bend our roses to the mother earth-a source of heat, the covering material shields its losses to the atmosphere, and the snow works as a thermos. Rose, wrapped in a cloth, is left alone with the frosts and is not able to survive the harsh winter.

It is noticed that “in a big company” roses winter better than separately growing specimens. This is due to the fact that with a large area of shelter under it creates a more comfortable temperature, because the earth warms. Over large roses in places of a fold it is necessary to establish in addition a crosswise kitchen garden arches, it becomes in order that they were not broken by snow. 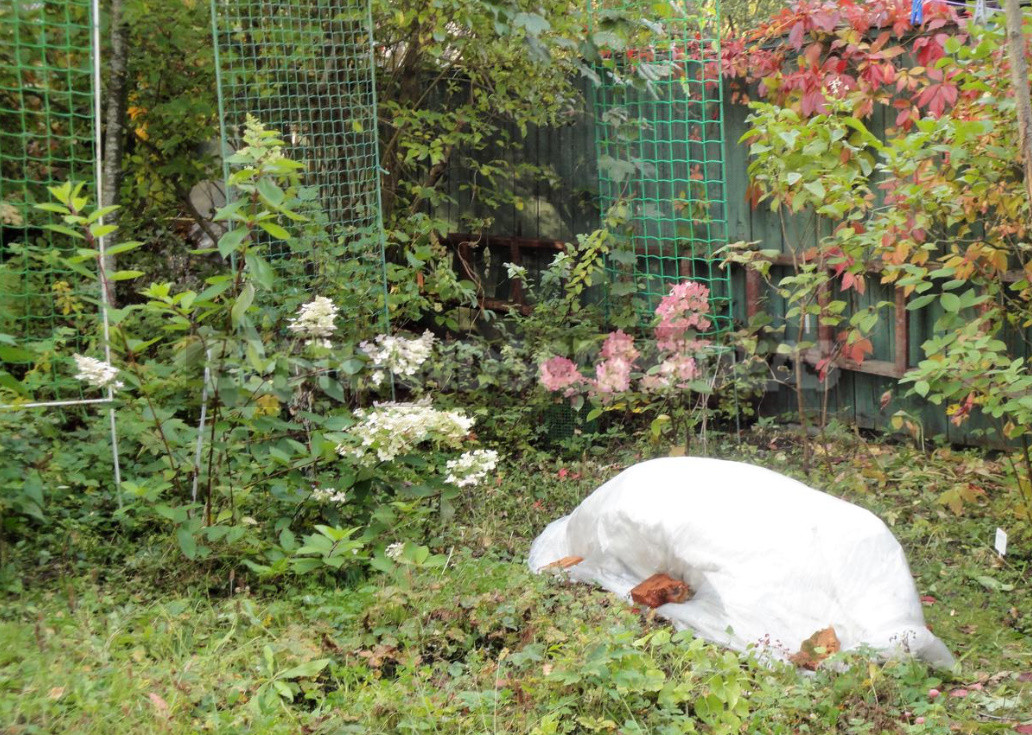 In such places, a dome is formed, from which the snow mass will inevitably slide. In conclusion, we throw on lutrasil more plastic film, leaving the bottom of the air for ventilation. This film protects the shelter from rain in the fall, from glaciation after winter thaws and, importantly, serves as additional protection from meltwater in the spring.

Properly wrapped roses will sleep peacefully all winter. Closer to spring we will talk about how to competently and safely release our captives and what to do with them then.