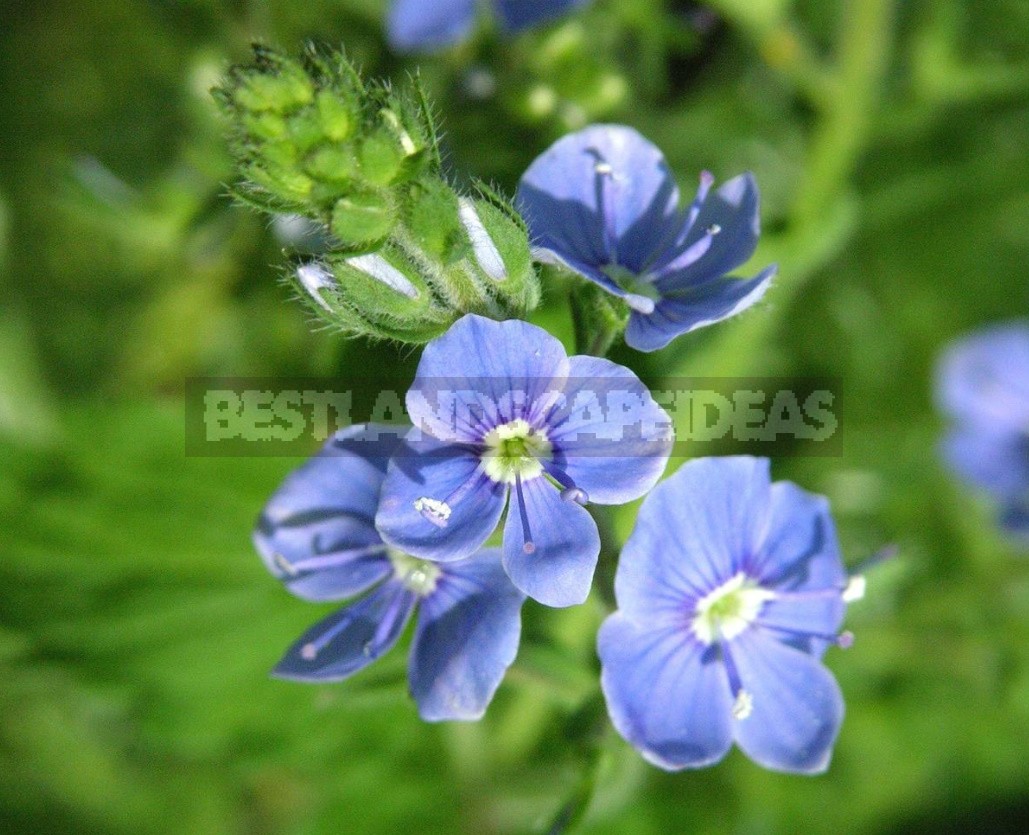 There are a lot of Veronicas – several hundred species, and although they are most richly represented in the flora of the Mediterranean and South Asia. This is an annual or perennial herb, rarely semi-shrubs. The leaves are mostly opposite, characterized by a flat flower with 4 petals and two stamens, sticking out like the hands of a clock, which usually shows ten to fifteen minutes to three. The most common color is blue.

The fruit is a box, similar to a heart or purse — who likes what. Opens in two flaps, pouring out small seeds.

For use in garden design, it is most convenient to divide these plants into groups by growth.

Among the Central Russian species, this group is dominated by uninteresting individuals. In addition to V. chamaedrys and a gray inhabitant of coniferous forests, for some reason called V. officinalis, the others are very ugly small weeds that the gardener throws out without thinking.

During mass flowering, V. chamaedrys attracts attention with blue flowers — poets usually attribute this color to the eyes of lovers, but in practice, only dolls have such eyes. More or less interesting variegated variety ‘Miffy Brute’, although it is too loose, spreading and often reverts. 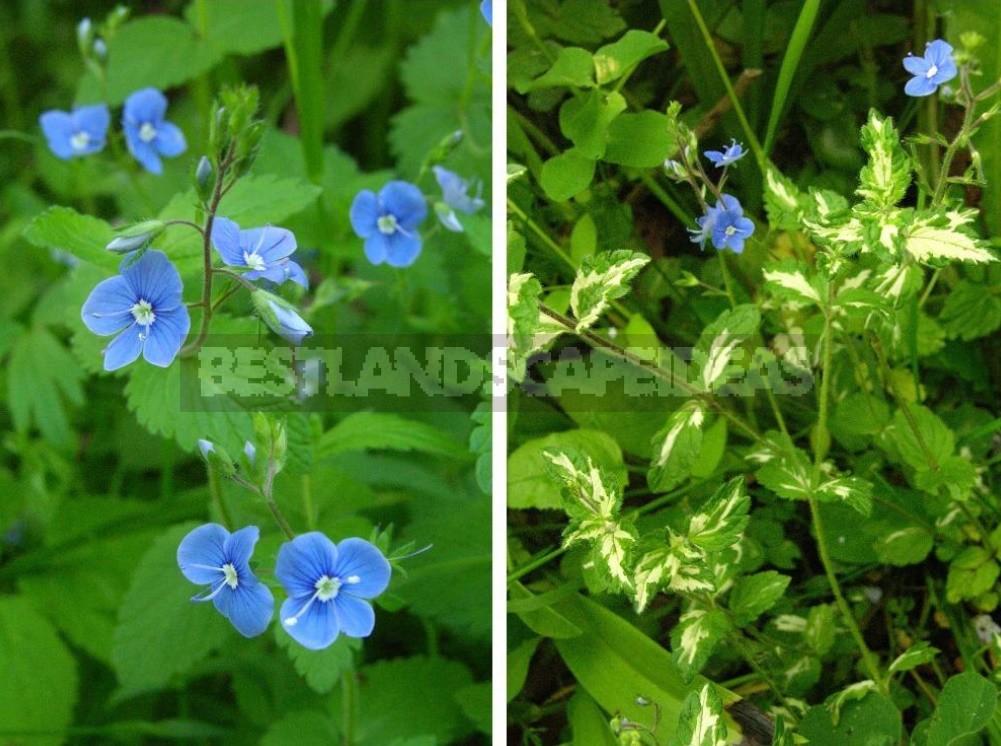 Another well-known similar variety- ‘Corinne Tremaine’ – has a Western forest V. montana with smaller and paler flowers, which compensate for the relatively large and conspicuous petiolate leaves with a wide cream border. The variety was obtained in an English nursery. It looks better with shading, because it burns.

READ  Saxifrages for the Rock Garden

V. filiformis appears unexpectedly, brought in with some pot, and at first causes joy. But when it spreads its lashes everywhere, growers begin to think how to get rid of it. 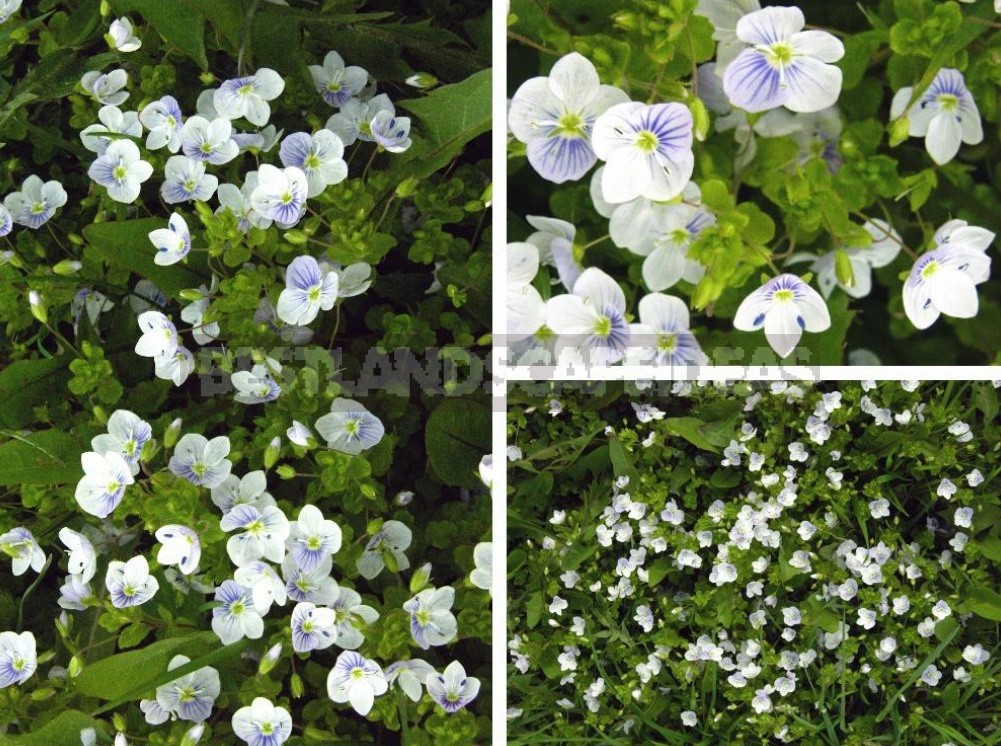 It is not suitable for rock gardens, because it is too fast and aggressively pulls the net all that it can. But it seems to have found its place – mowed lawns. V. filiformis blooms violently, but not for long, and after mowing becomes completely invisible. Its long – forgotten homeland is Asia Minor. Whether it is an annual or not, it is difficult to say: the stem is constantly crawling and rooting, perhaps overwintering.

In the gardens of Amateurs, you can find a number of small creeping species collected from different parts of the Earth, whose names do not always correspond to reality. For example, experts who are trustworthy claim that all the plants that are sold under the name “V. peduncularis ‘Georgia Blue’ (‘Oxford Blue’)” are actually V. umbrosa, once collected by the British in the Caucasus and incorrectly defined.

This is a thin plant with reddish creeping stems and proudly raised racemes of large whitish, blue or pink flowers. Sometimes you can suspect confusion, seeing frankly different portraits that illustrate the same view, and such incidents are enough. So here is a small part of groundcover Veronicas, descriptions and photos of which in catalogs usually correspond to reality. In the first place, you can call the actual Alpine plants that inhabit the mountains of Europe.

The traditional inhabitant of rock gardens, which does not require special attention, except for weeding, is the Alpine V. fruticans, woody at the base, with shiny hard leaves and bright flowers. Do not confuse it with V. fruticulosa – this is a less spectacular plant, interesting except that pinkish flowers.

READ  Re-Flowering: What Plants Bloom Again and How to Help Them 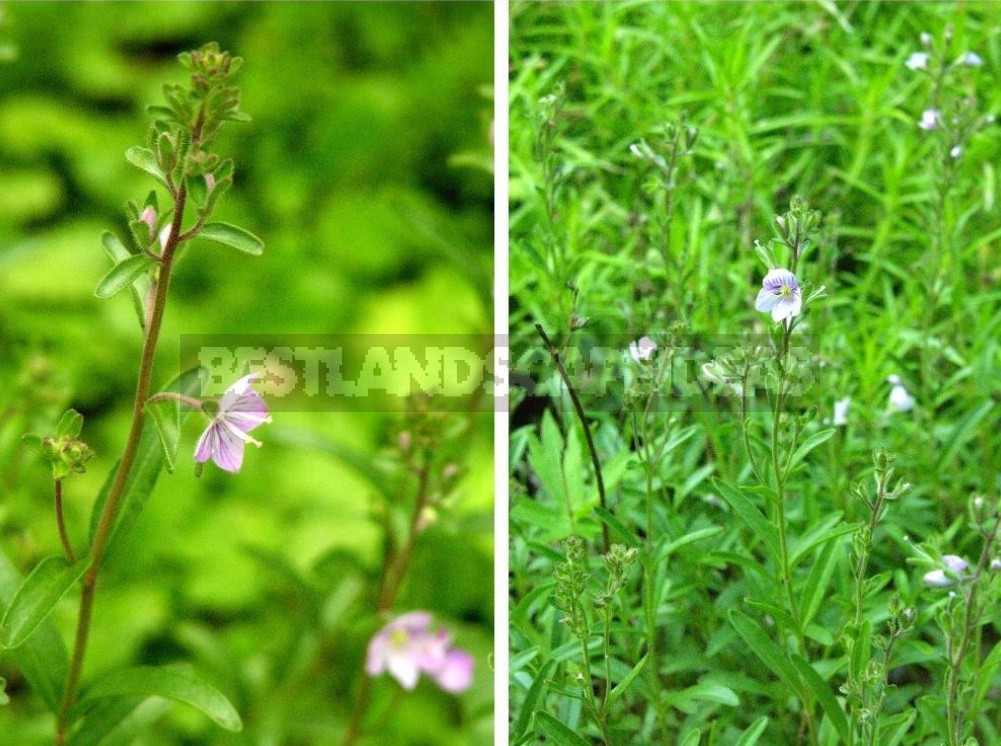 V. alpina has dense oval entire leaves, blue-green, with and without pubescence. Inflorescences are small, blue (in the wild form). You can also find white ones-in the ‘Alba’ variety. The elegant V. Armenia is loved for the elegance of its slender stems, which are set with thread-like leaves. Flowers are blue, blooms in mid-summer.

V. schmidtiana is a meadow plant of Japan. Leaves are oval or broadly lanceolate, both pubescent and glabrous, with large teeth or even pinnate. Loose brushes are quite long, 15 centimeters. The flowers are both blue and pink. 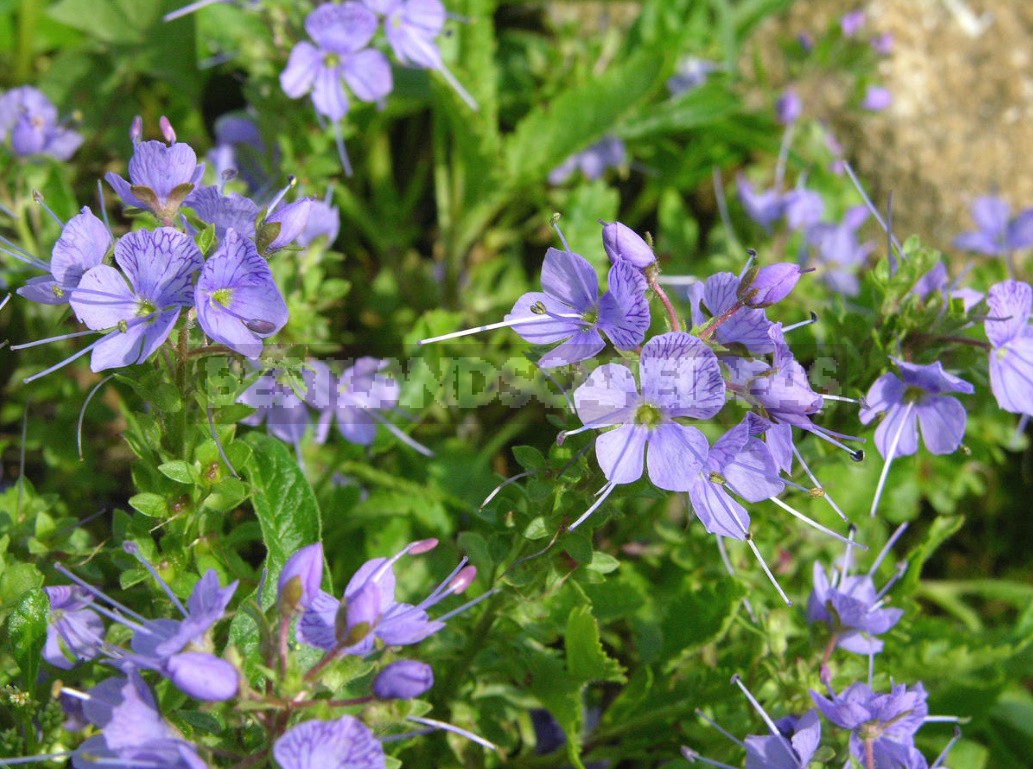 Turkish V. surculosa in the absence of weeds forms dense carpets of grayish-green fluffy toothed leaves of a rounded shape. Short inflorescences, in which pink flowers are densely Packed in leaves, almost do not rise above the General array. In good weather, the flowers are plentiful and noticeable, but easily fly around under the first drops of rain. 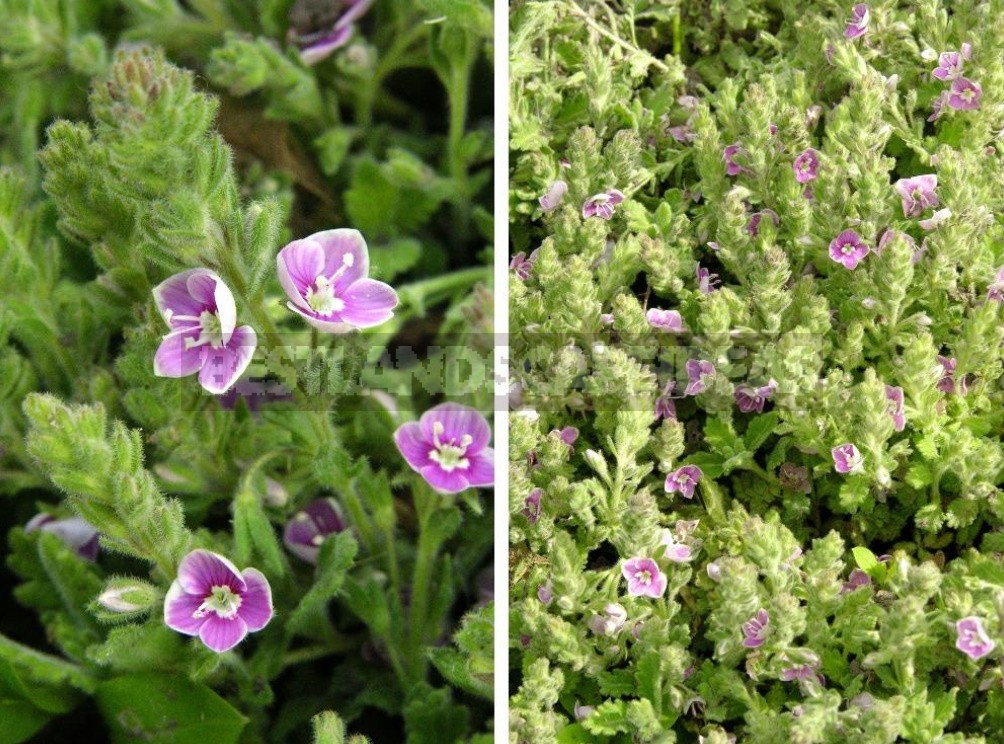 Whatever you write, this Veronica looks better in dry but fertile Sunny areas. And if it can withstand the conditions of the middle lane, then V. repens from Spain has a chance of survival. Especially advertised yellow-leaved variety ‘Sunshine’ with dense dense leaves laid on the ground, and pale, almost white flowers.

In General, in the catalogues of groundcover Veronica is not uncommon, and if desired, they can make a significant collection.

Charming Daisies
Medicines for Plants From Your First-Aid Kit
Horsetail - From the Garden Out!
What Medicinal Plants are Harvested in May (Part 1)