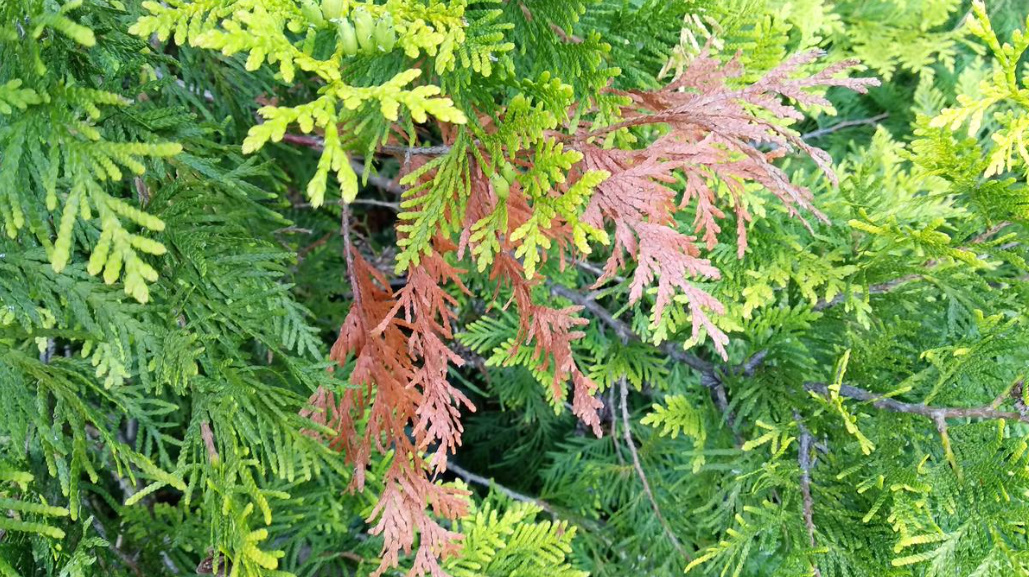 Thuja has thoroughly “registered” in many gardens. Successful compositions with the participation of different species of this plant were observed by designers in European parks and private estates, where this wonderful conifer settled back in the XVI century. As a rule, varieties of Thuja occidentalis are planted, but there are other species. Despite good acclimatization and resistance to frost, these plants can sometimes look unimportant, and first of all, the yellowing of needles attracts attention. Let’s look at why this can happen.

Tui agrotechnics cannot be considered too complicated. That is why they are so popular not only in professional gardens and parks, but also in small amateur plots and dachas. Despite the relative unpretentiousness, thuja require regular watering. With insufficient moisture, the needles of the tree turn yellow.

In the first year after planting, the seedling needs more attention. First, watering is required 1 time a week (about 10 liters per plant), then — as the earth dries, but at least 2 times a month. It is better to water in the morning. Of course, you need to pay attention to the weather, and if the rains have charged, then you do not need to moisten excessively. Overflow is harmful to both young and adult thuja, and the tree can also react to it by yellowing needles. 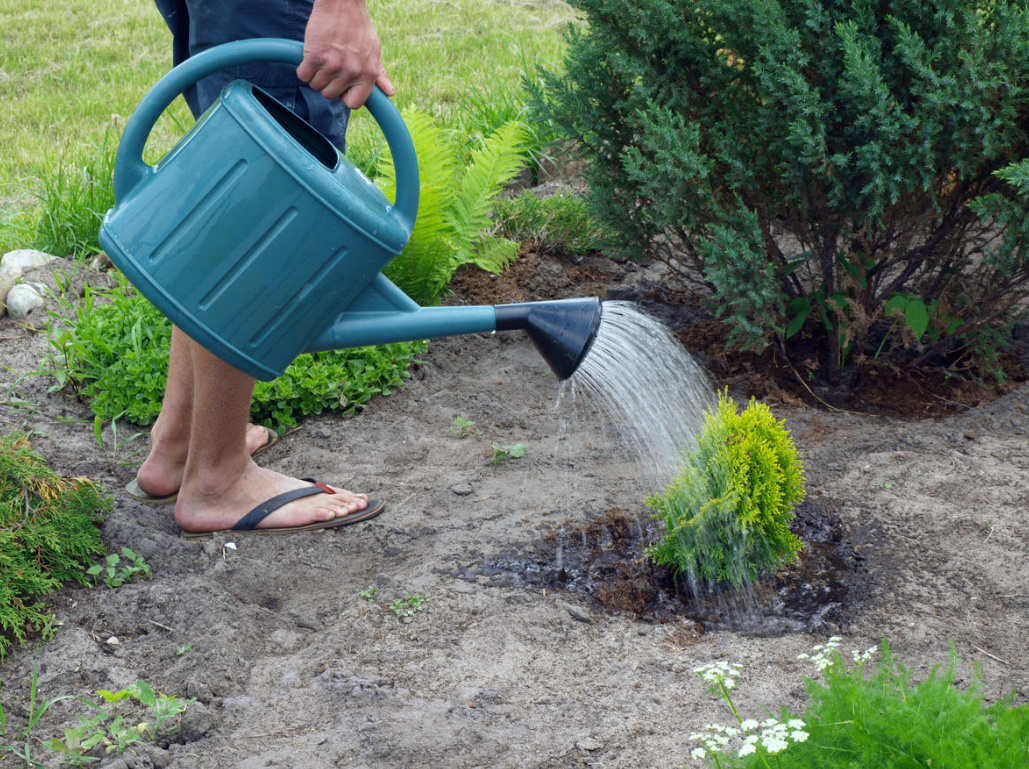 The older the plant, the less often it needs watering, but this does not mean that you can forget about it altogether. On average, in summer it is required to moisten the thuja once every 2-3 weeks (10-15 liters per plant). In spring and autumn, as a rule, there is enough natural precipitation.

Both young and adult thuja love sprinkling, so in summer from time to time you need to arrange a shower for them, especially during the hot period. This should be done in the evening. After water procedures, the plants become more vigorous, along with the needles, the dust is washed off, and the air is moistened. 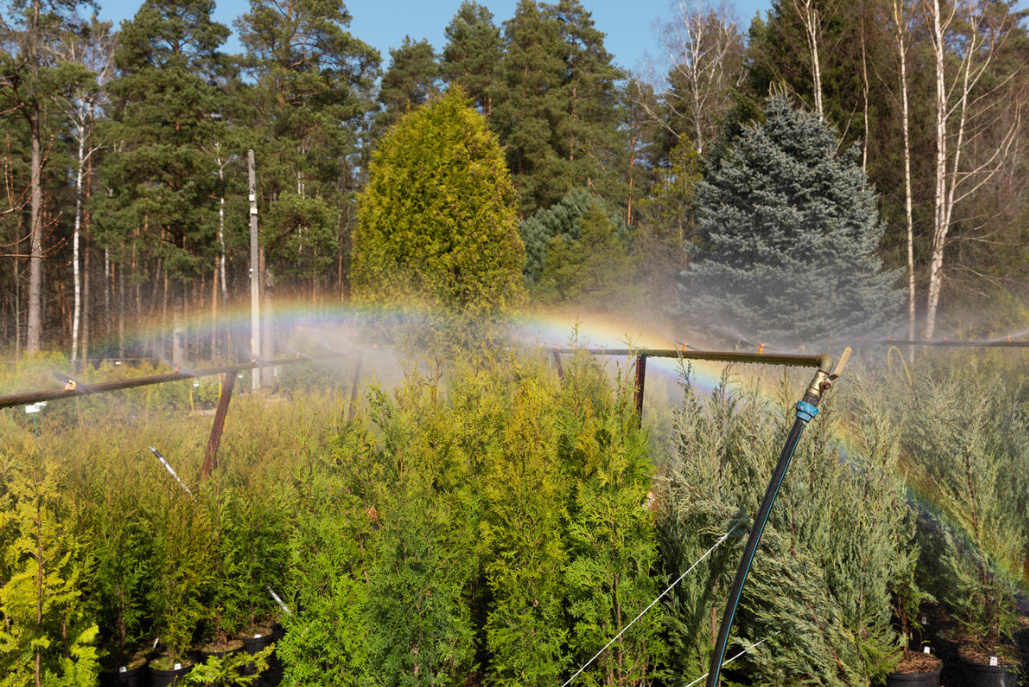 The needles of thuja are quite tender and can change their color to yellow due to sun or chemical burns. 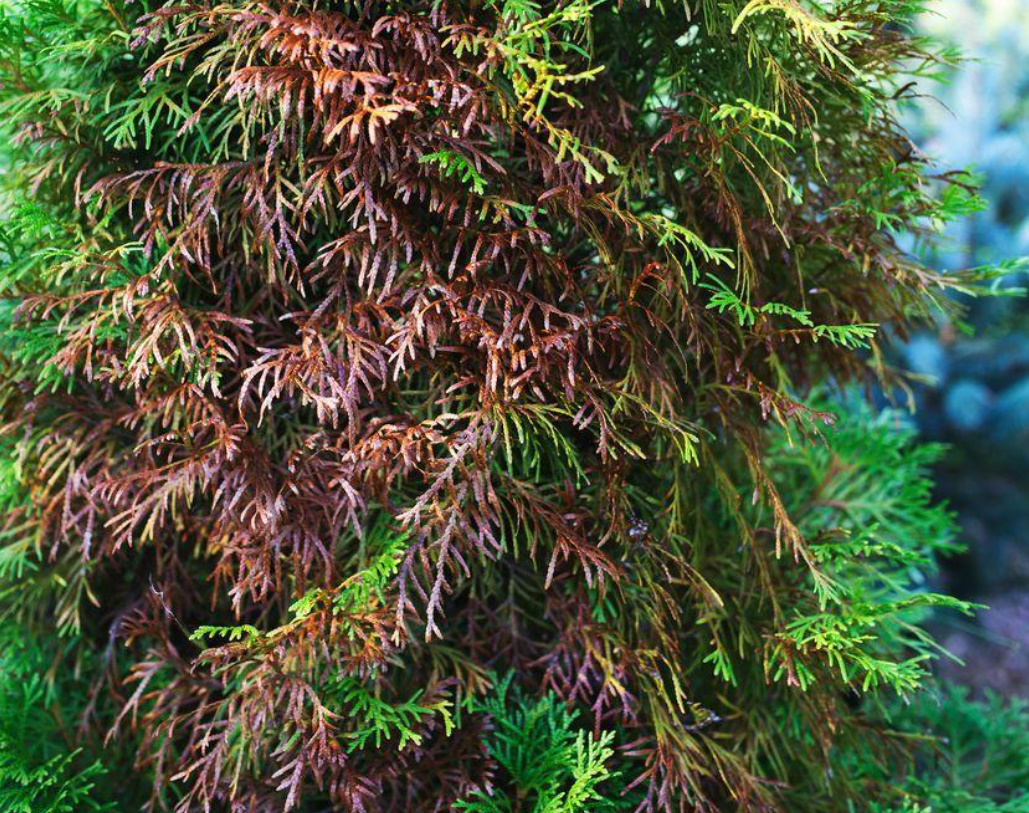 This is usually noticed by the owners in late winter or early spring. By this time, the day is getting longer, the sun is more, but the snow is still lying, and the ground is frozen. Thuja receives both the burning sun rays and the reflected ones from the snow. Needles in these conditions lose moisture, but they cannot get it from the roots yet, since they have not yet “earned”: the earth has not thawed. As a result, the tree turns red on the sunny side. Both young plants and adults can suffer, although it is the seedlings experiencing the first or second winter that are most affected.

It is possible to cope with this problem by shading the thuja from the south side with a screen made of a facade mesh or covering material. In some cases, the plants are completely sheltered for the winter, at the same time protecting from snow load on individual branches. If this does not help, then resuscitation should be started as early as possible. 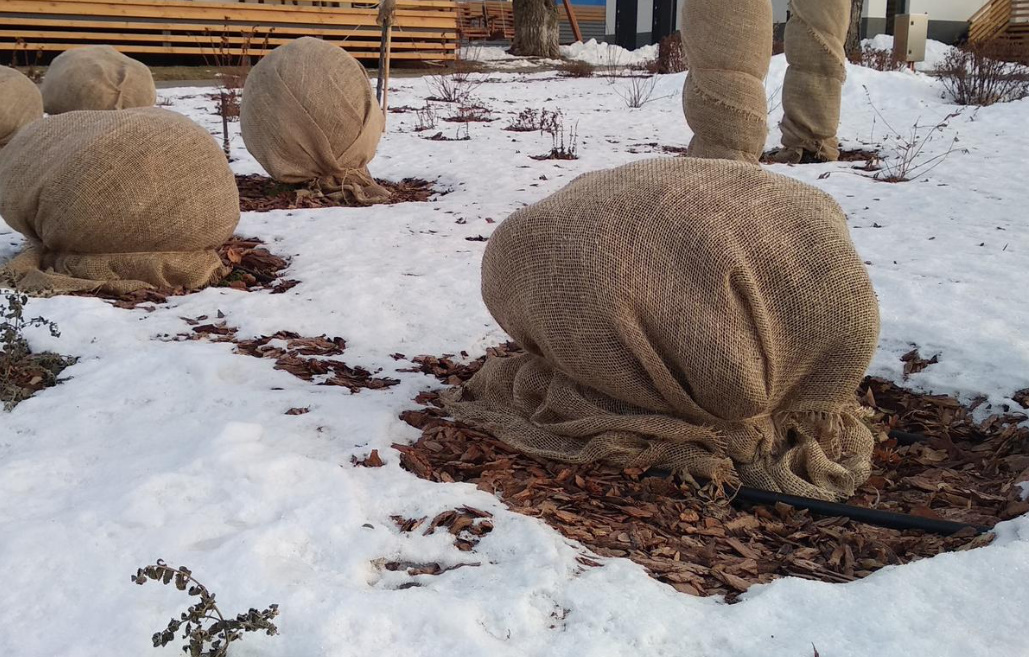 This trouble can occur due to the vital activity of pets. Cats and dogs like to leave marks on thuja, and always in the same places. Needles do not withstand the action of aggressive liquid — first turns brown, and then turns yellow.

To protect your conifers, first of all you need to restrict the access of animals. If the reason is your dog, then it’s not so difficult to teach him to leave marks on the thuja. It is more problematic to do this with cats, since they are poorly trained, and besides, strangers can come to the meeting point. 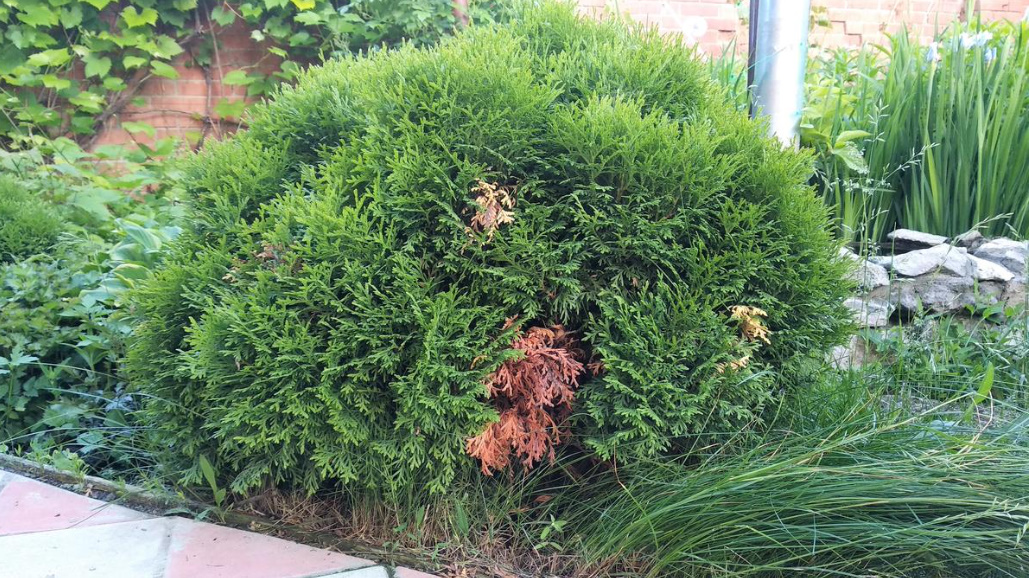 To protect plants, you can use a plastic mesh or other material from which to make a fence. Unfortunately, it is often difficult to arrange it so that it looks aesthetically pleasing. Some gardeners stick sharp sticks in the ground around the circumference of the tree — it becomes inconvenient for cats to approach the plant, and they choose another object to leave messages. You can also plant plants around thuja that are unpleasant for cats: Lavandula, Geranium, Plectranthus caninus.

If only the needles are affected, then the young twigs will be able to gradually grow new greenery. To facilitate the recovery, the yellowed place should be thoroughly washed with water, and then sprayed with a stimulant.

As a rule, thuja are characterized by good immunity to diseases and great resistance to pests, however, when yellowing, it should be borne in mind that the cause may be problems of this nature.

Thuja rust is caused by the activity of fungi of the Gymnosporangium family. Young, immature plants are more often affected. In the spring, the needles turn red, and then dry up. If one plant in a hedge is sick, then there is a high probability that a rapid infection of neighboring plants will occur. First of all, affected branches are removed from diseased plants, fallen needles are removed from the soil, and then treated with copper-containing preparations. 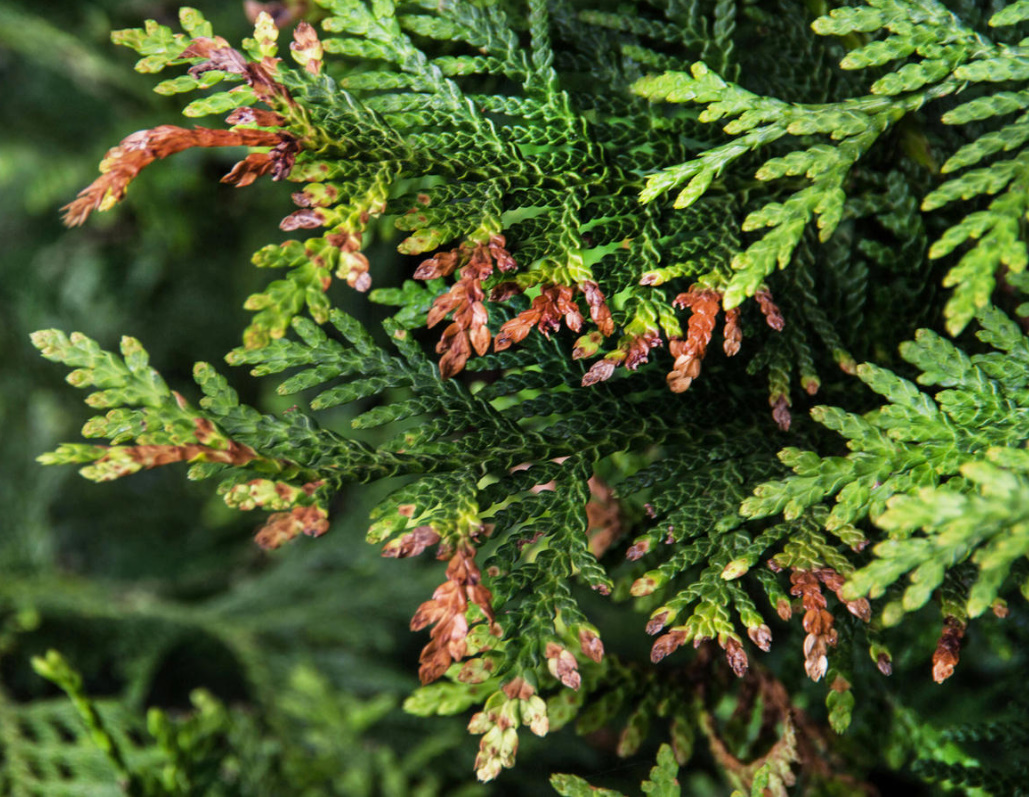 Late blight is a fungal disease (the causative agent is Phytophthora infestans) that primarily affects the root system. The needles at the same time become wilted, change color to pale gray-yellow. The trunk in the root zone softens, the tissue under the bark turns brown. Fungicide treatment will help to cope with the disease. 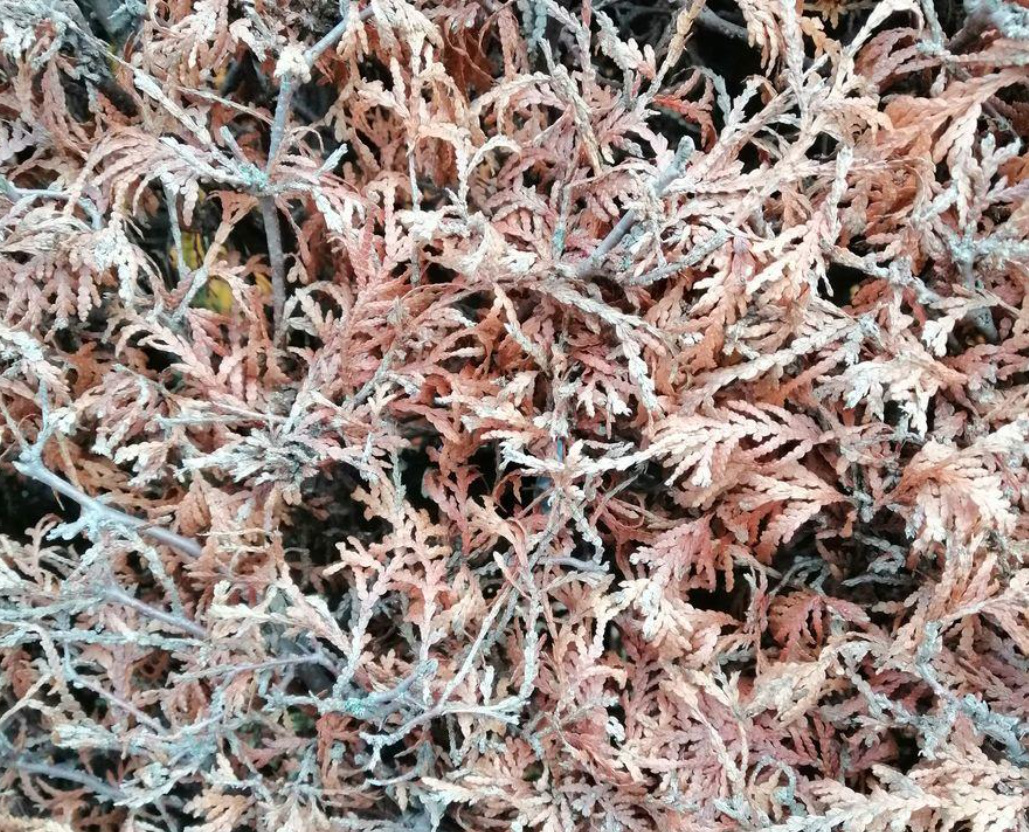 Parthenolecanium fletcheri is a specialized insect pest that affects plants from the Cupressaceae family, including thuja. It is carried by the wind, under favorable conditions, the colony can increase very quickly. Parasites are placed on top and bottom of the needles, on thin twigs, on the trunk. Nutrition of Parthenolecanium fletcheri leads to drying and yellowing of needles, ulcers form on the bark. Pest control should be treated with insecticides.

There are other diseases of thuja, but when yellowing, first of all, the above should be borne in mind. The best prevention of them is the observance of proper agricultural cultivation techniques. When planting tui, it is necessary to avoid strong thickening. Plants that are properly cared for (if they are watered in a timely manner and preventive treatments are carried out against diseases and pests) will be much better at resisting any adversity.

A yellow spot on the thuja may be the result of a banal injury. For example, a young seedling is sometimes damaged during transportation or shelter. If a broken twig is not immediately noticed, then it will dry out and stand out as a bright blob against the background of green needles. You just need to delete such a branch. If it is large and broke off from the trunk, then the wound is best cleaned and treated with a fungicide. 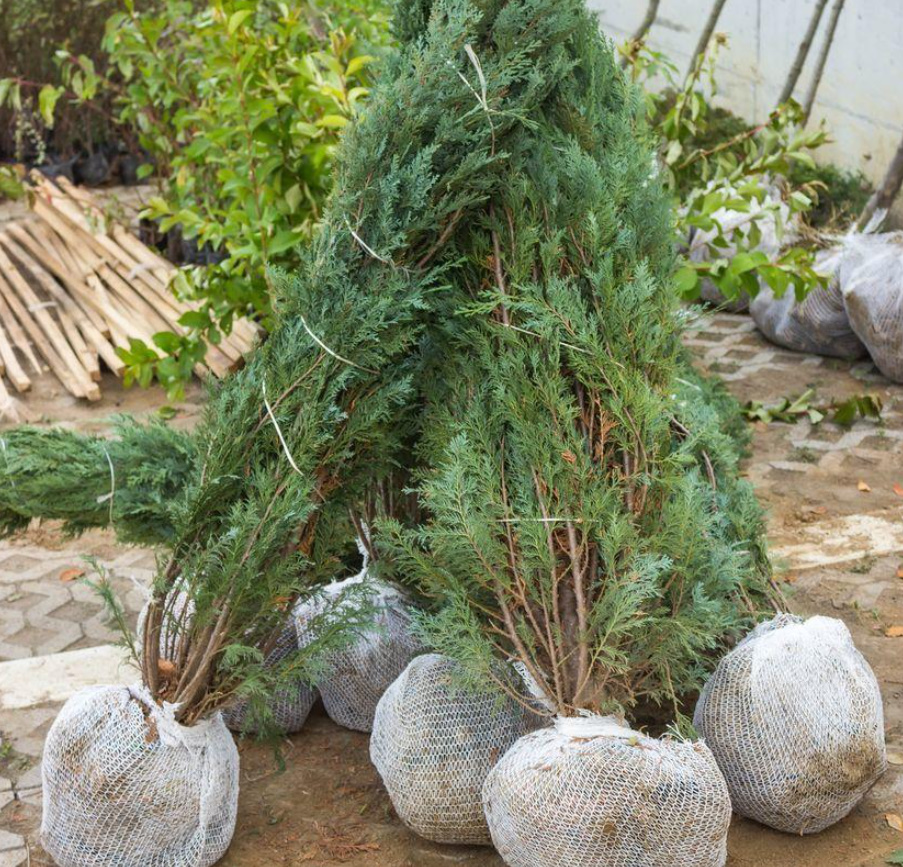 Do not forget that even though the thuja is an evergreen plant, but its needles have their own life span and at the end of it dries up and falls off. Depending on the variety and growing conditions, this happens every 3-7 years. Needles fall in adult plants can be observed around the middle of September, but sometimes dry needles appear inside the crown throughout the warm season. 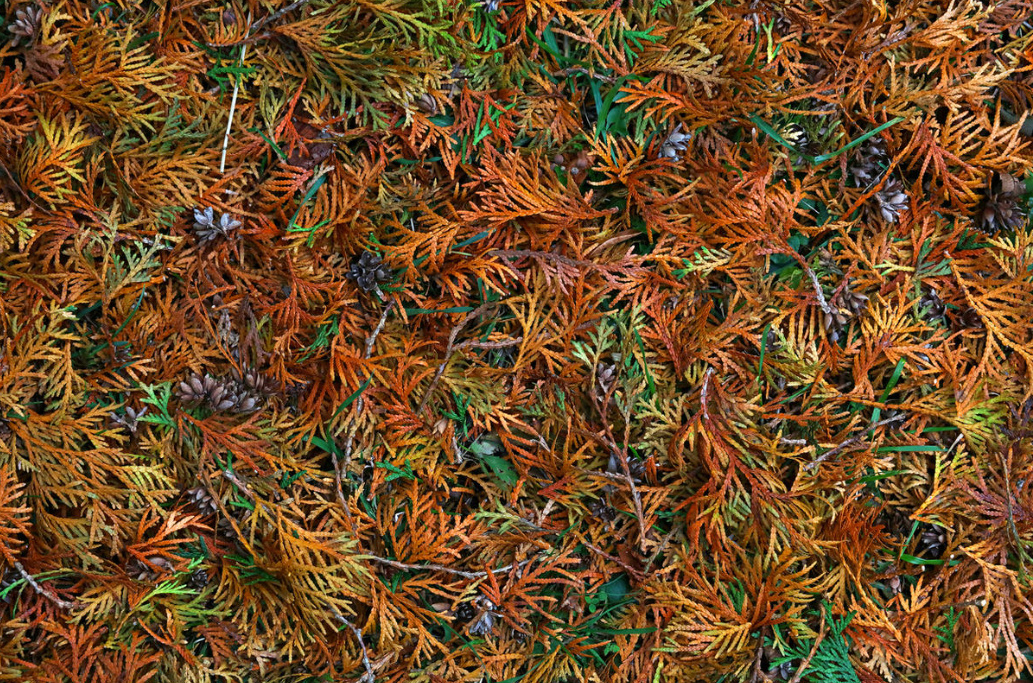 A healthy thuja always becomes a garden decoration. This coniferous plant fits perfectly into almost any landscape idea and goes well with other perennial plants. Give her a little of your attention, and she will delight you throughout the year — both in summer and in winter.

Dear readers, what kind of thuja grow on your plots? Tell us if you have ever encountered the problems described in this article, and how you coped with them. 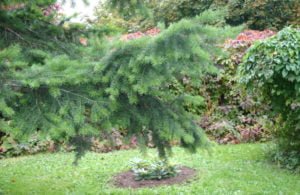 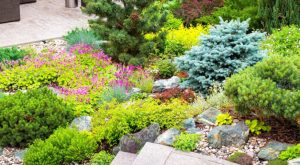 Coniferous Plants In The Garden: Height Groups And Their Use 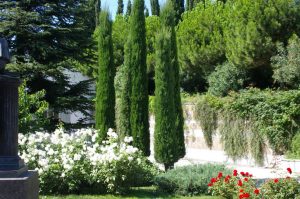 Cypress And Its Relatives: Features Of Cultivation And Reproduction 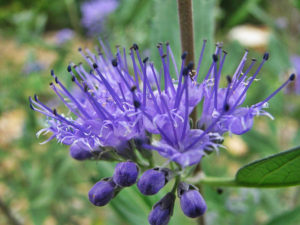