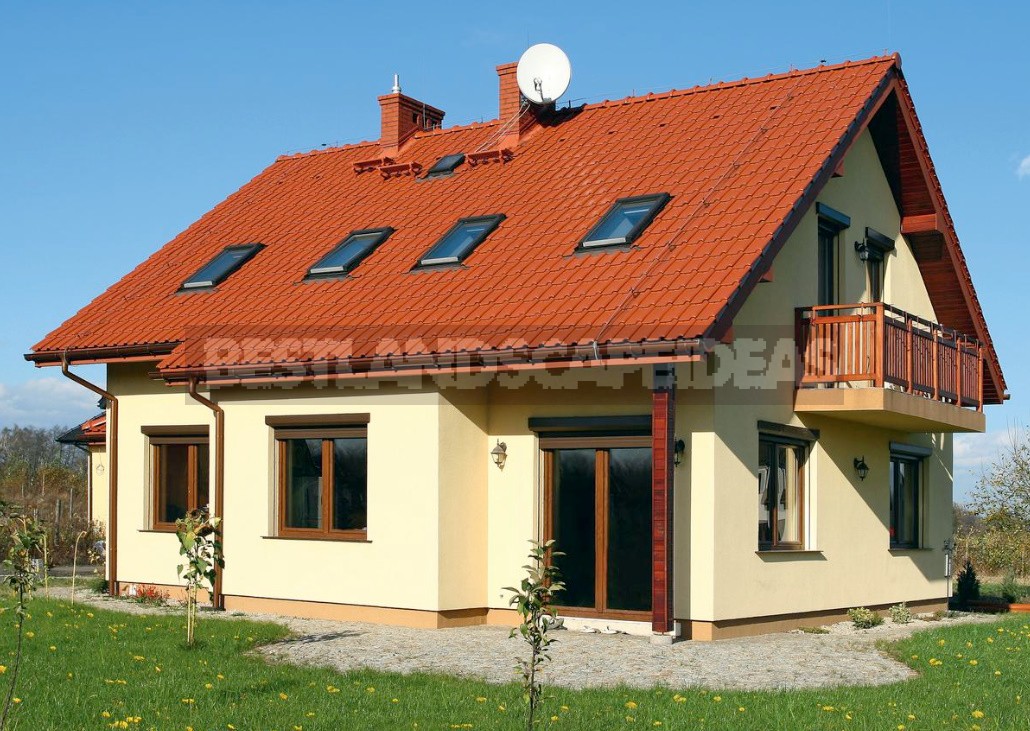 If you decide to buy a country house, you need to carefully inspect the building in order to assess its condition or invite a specialist to inspect it, who knows what nodes you must pay attention to. Typical situations are described by a construction expert.

In recent years, country houses with load-bearing walls made of foam concrete, aerated concrete and expanded clay concrete blocks (generally we will call them light concrete blocks) have become widespread. More than 50% of all country houses today are built from these materials. Such houses are economical in construction and operation. They are light in weight compared to brick and concrete houses, and therefore foundations for block houses are cheaper.

Light concrete blocks have large dimensions, and the walls of them “grow” much faster than when building from bricks. And since the material from which they are made has a low thermal conductivity, houses with such walls do not require large expenditures for insulation.

With all the positive qualities of light concrete blocks have disadvantages. First of all, this is a low strength compared to brick and concrete. Therefore, when building load-bearing walls from them, it is necessary to strictly observe the technology of work. For example, it is necessary to install monolithic concrete or brick reinforced belts under floors and mauerlats, as well as over window and door openings.

Some builders often save on reinforced belts, make them insufficiently strong (for example, from low-quality bricks) or do not make them at all. 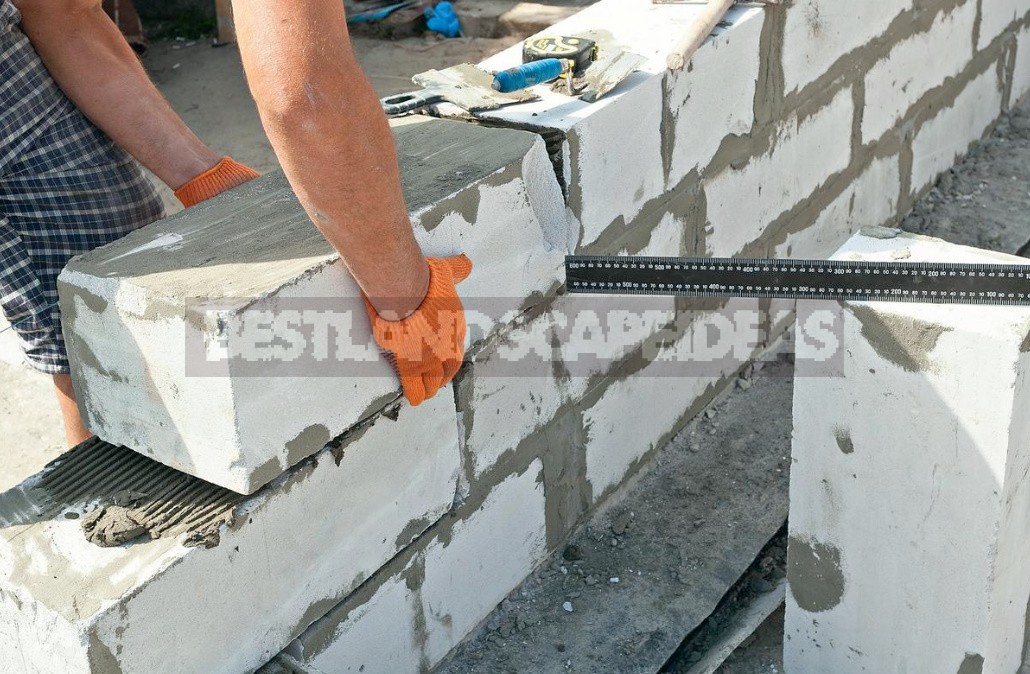 Violations of construction technology in the device of reinforced belts lead to the appearance of cracks in particularly loaded parts of the walls and can lead to a complete loss of load-bearing capacity of structures. The house is in a state of disrepair.

A common defect in the construction of light concrete blocks is undemonted plaster beacons made of galvanized steel, which rust over time and destroy the plaster layer.

The joints between the blocks

Another common defect of walls made of light concrete blocks is insufficient filling of masonry joints with mortar and non-compliance with the requirements for their thickness, which leads to a weakening of the bearing capacity and strength of the walls. After the masonry is completed, the walls are usually plastered, but voids in the seams remain. Defects in construction appear later in the form of numerous constantly opening cracks. The house from this, most likely, will not collapse, but “live” cracks will become the hallmark of the building.

Here are specific examples of low-quality construction of light concrete blocks and the consequences that it leads to.

Externally, a beautiful and solid house with load-bearing walls of foam blocks under plaster gave the impression of a strong and reliable. The family of potential buyers was happy with everything and, having decided to purchase this house, made a Deposit. But at the last moment, the head of the family, on the advice of friends, decided to conduct a more detailed examination.

There were numerous fresh and old patched cracks in particularly loaded parts of the load-bearing walls (under slabs of interstory floors, under and above window and door openings, etc.). the Buyer assumed that it was cracked plaster. But an inspection of the cracks near the openings showed that the cracks run through the entire thickness of the wall. Simply put, the walls cracked (photos 1, 2, 3) and as a result lost their strength and load-bearing capacity.

According to the norms that apply when buying houses and other real estate transactions, if the width of cracks in concrete structures is more than 3 mm, the condition of the house is classified as unacceptable. Without measures to strengthen the house can not be allowed for subsequent operation. It is necessary to carry out such safety works as load limitation, safety nets, etc.

If the width of cracks in concrete structures is more than 2 mm, the condition of the house is classified as emergency. This condition is fraught with possible collapse of the structure and danger to people living in the house. Immediate measures are required to unload the structure and install temporary (emergency) fasteners, it is necessary to strengthen the structures and carry out repair and restoration work. In case of inexpediency of repair, the structure is generally subject to disassembly.

Measurements of the width of cracks in the house in question showed that in some parts of the structures it is more than 3 mm. Based on this, the condition of this house was recognized as an emergency, and the question of whether to buy or not to buy such a house, disappeared by itself.

When repairs are unavoidable

In another case, a happy family who recently bought a house that was built of expanded clay blocks, after the first winter season began to observe the appearance of small cracks on all the walls and especially near the Windows – both inside and outside the house (photo 4).

A thorough inspection of the walls revealed numerous undemonted plaster beacons that were corroded and caused the plaster layer to crack (photo 5).

When opening the plaster layer, masonry seams were found not filled with a solution (photo 6), the thickness of which was from 2 to 35 mm instead of the required 10-12 mm.

Low-quality bricks were used in the construction of unloading belts. All this caused a decrease in strength, a decrease in the load-bearing capacity of the walls and their mass cracking (the width of cracks opening-up to 1 mm).

The condition of such a house was considered unacceptable, and without measures to strengthen it, it could not be allowed to continue operating. So I had to upset the new owners with the prospect of quite expensive repairs.

See for yourself or invite a specialist

Unfortunately, such cases are widespread today. And before buying a house built of light concrete blocks, you must carefully inspect all the walls from the outside and inside for cracks. Any cracks should alert the buyer before the start of a full survey of load-bearing and enclosing structures. The story about the construction defects of houses made of foam, gas, and expanded clay blocks should not be taken as a verdict on these building materials. In compliance with all technological requirements and high-quality performance, houses built from light concrete blocks are reliable and durable. After a thorough construction expertise, you can buy them without fear of repairs-endless and ruinous. 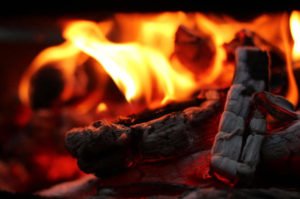 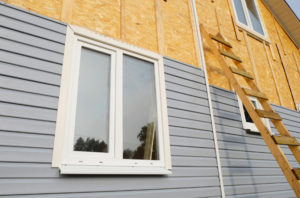 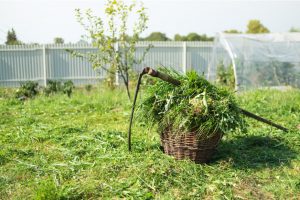 An Unusual Story Of a Common Tools 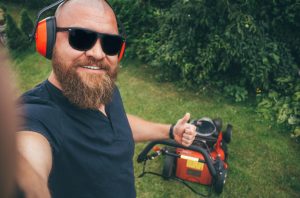