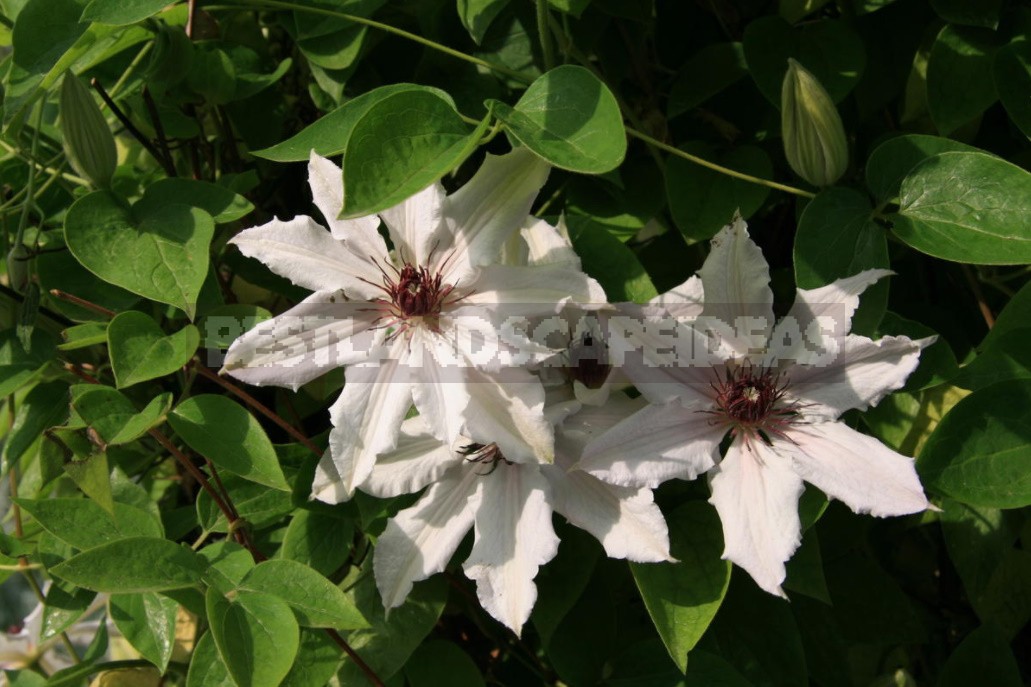 Time is changing rapidly. Familiar plants open up to us with their new facets, encouraging us to collect collections, because it is impossible to prefer one variety to another — you want to collect them all in your magic casket — garden. Clematis is deservedly considered the king among lianas, and today many fans have interesting collections, and many hundreds of varieties and complex hybrids are hidden in the storerooms of European nurseries. Still, I suggest you take a fresh look at your clematis.

Summing up the results of the next season, I was surprised to count almost a hundred varieties in my own collection. Where in a private garden can such wealth be placed? The fact is that the subject of my passion is mainly clematis with small flowers. Clematis varieties inevitably remain favorites: Clematis viticella, C. integrifolia, some other species and, of course, Atragene. They are fundamentally different from large-flowered hybrids, extremely diverse and incredibly plastic in design. 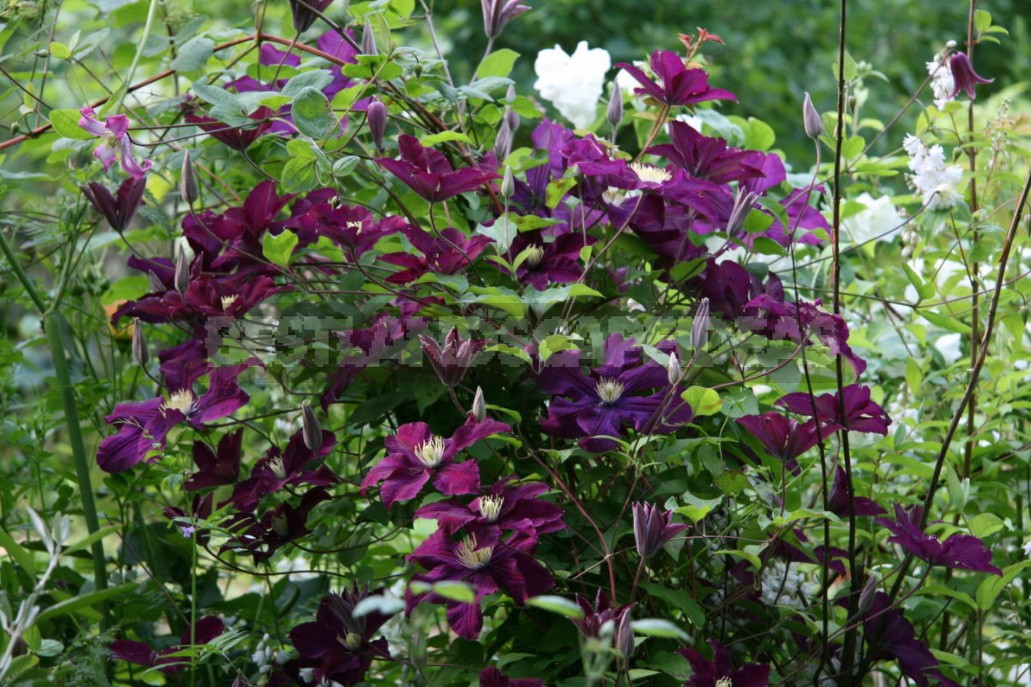 Large-flowered-lianas with powerful growth, they form a huge vegetative mass during the season, dozens or even hundreds of large and bright flowers that replace each other throughout the summer. They need a lot of sun and a large area of food, additional watering and fertilizing, accuracy in care.

This is especially important for clematis of the so-called 2nd pruning group, that is, those that bloom twice a season — in spring and autumn: first on overwintered shoots, and later on shoots of the current year. In these clematis, it is necessary to preserve some of the shoots until spring, which means that you should carefully remove them from the supports, clean them from the remains of foliage and lay them, if possible covering them with a dry leaf.

But I must say that this group just includes the most beautiful clematis, often with huge or double flowers, corrugated edges of sepals and amazing colors. They are certainly worth our effort, but unfortunately, not everyone has time for this, especially if there are dozens of such varieties in the garden. 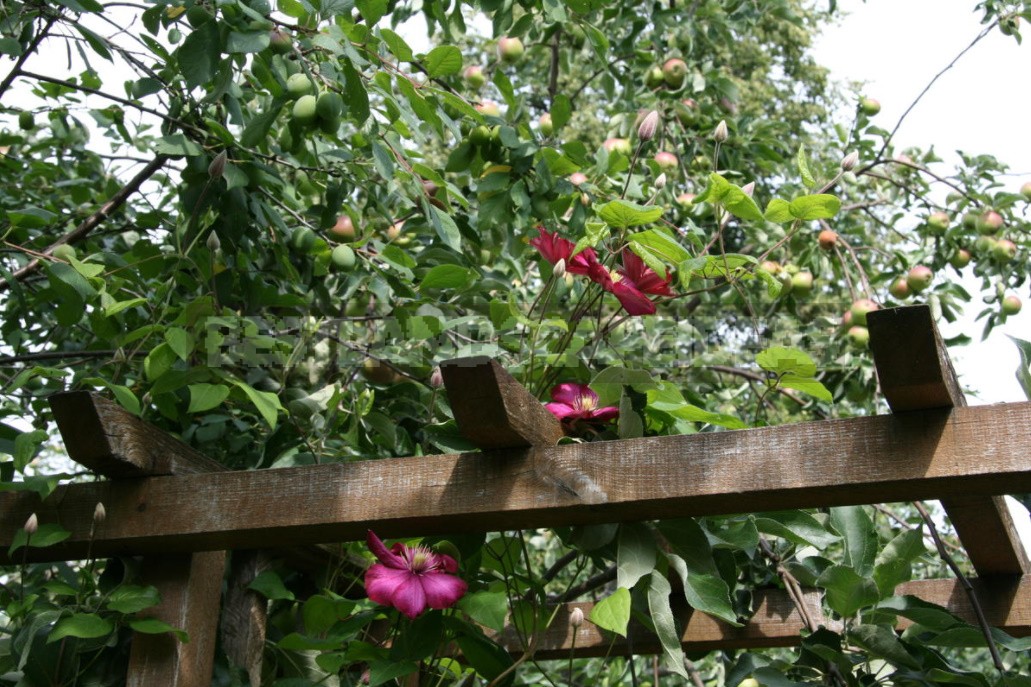 The situation is simpler with large-flowered 3rd group of pruning, that is, those that bloom only on newly grown shoots in the spring, usually from the second half of June until the cold weather. The difference is mainly in the fact that they do not need to save shoots until spring, and this makes it easier to care for them.

They can be grown together with other vines, because there is no need to carefully disassemble the lashes. They are cut off above the ground, and the entire upper part is removed in parts after leaf fall. Therefore, such clematis can be successfully combined with Parthenocissus, Lonicera, climbing roses and some other lianas. And practical experience clearly convinces that in General they are more unpretentious.

It makes sense to look at the numerous varieties of Clematis viticella. This surprisingly variable species is known to European gardeners since the middle of the XVI century. Even then, its spontaneous mutations with various colors and sizes of flowers, double and semi-double forms, lianas with different lengths of shoots were cultivated in gardens. 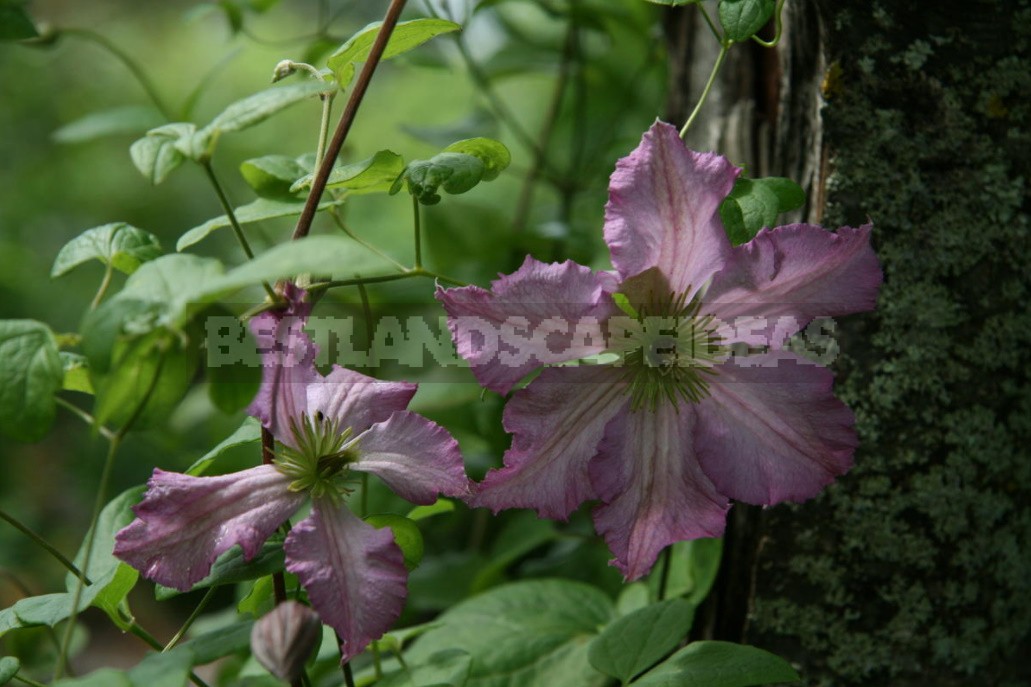 Today’s assortment is incredibly large and diverse: small and large, simple and Terry, bright and delicate, light and dark, textured, shiny and velvety — despite the fact that they all belong to the 3rd group of pruning, which means that their care is extremely simple. 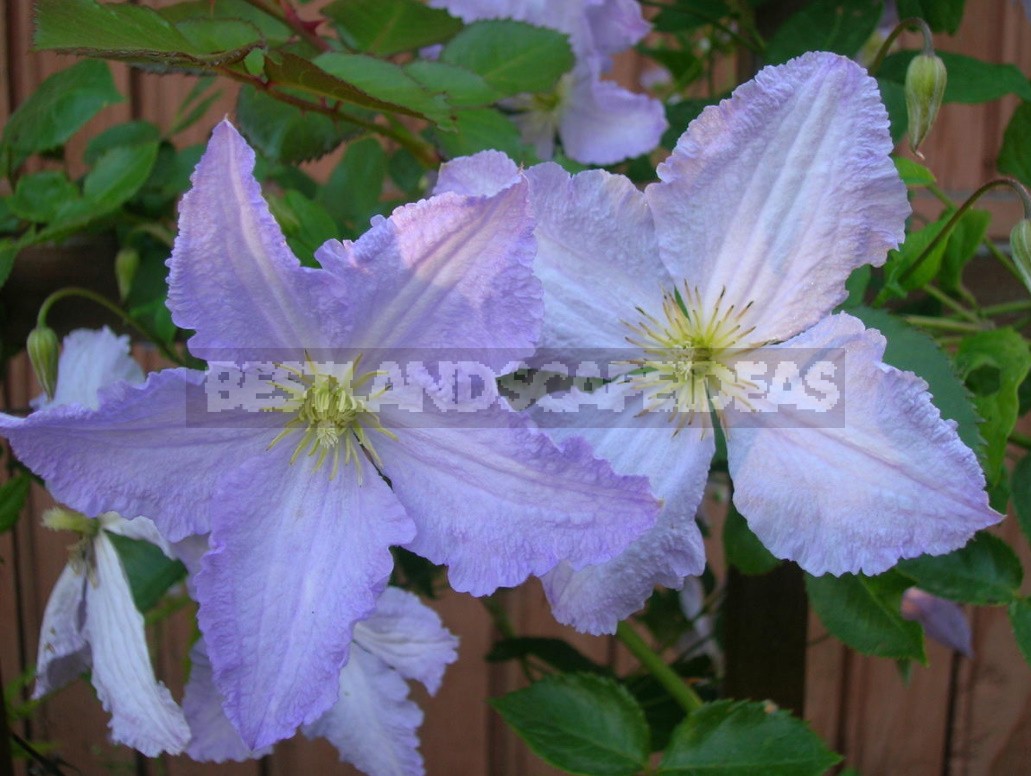 They are easier to tolerate the lack of sun than other large-flowered hybrids, so they can be planted between bushes and under trees, giving them only 3-5 hours of open sun. 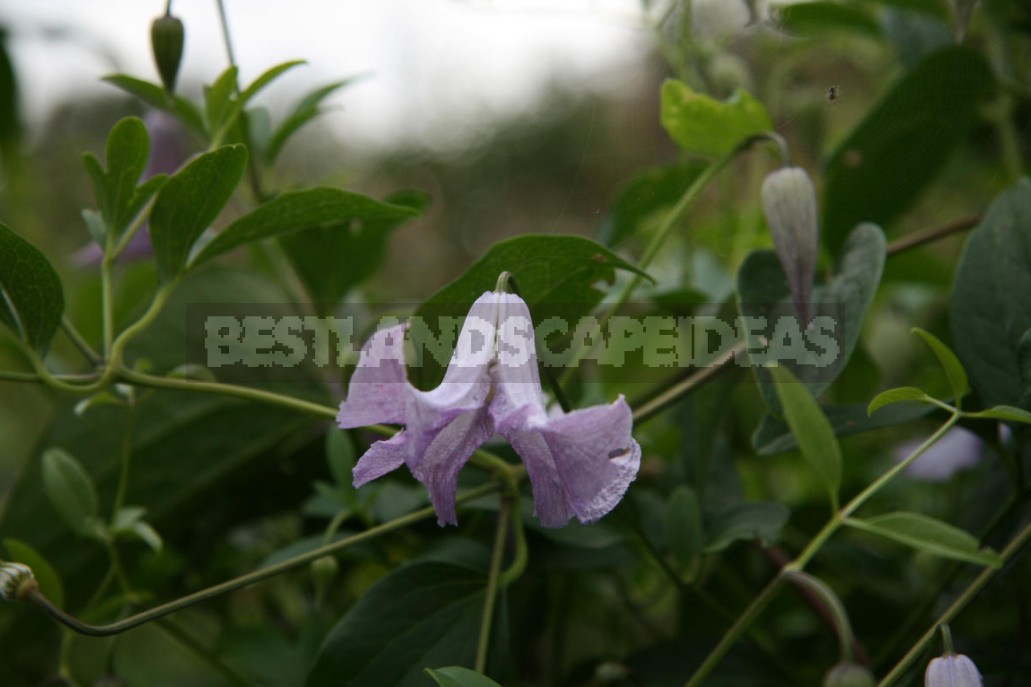 Of course, each variety has its own health reserve, but it is with them that you can safely experiment, combining them with other plants, placing them in shrub borders and in groundcover culture. 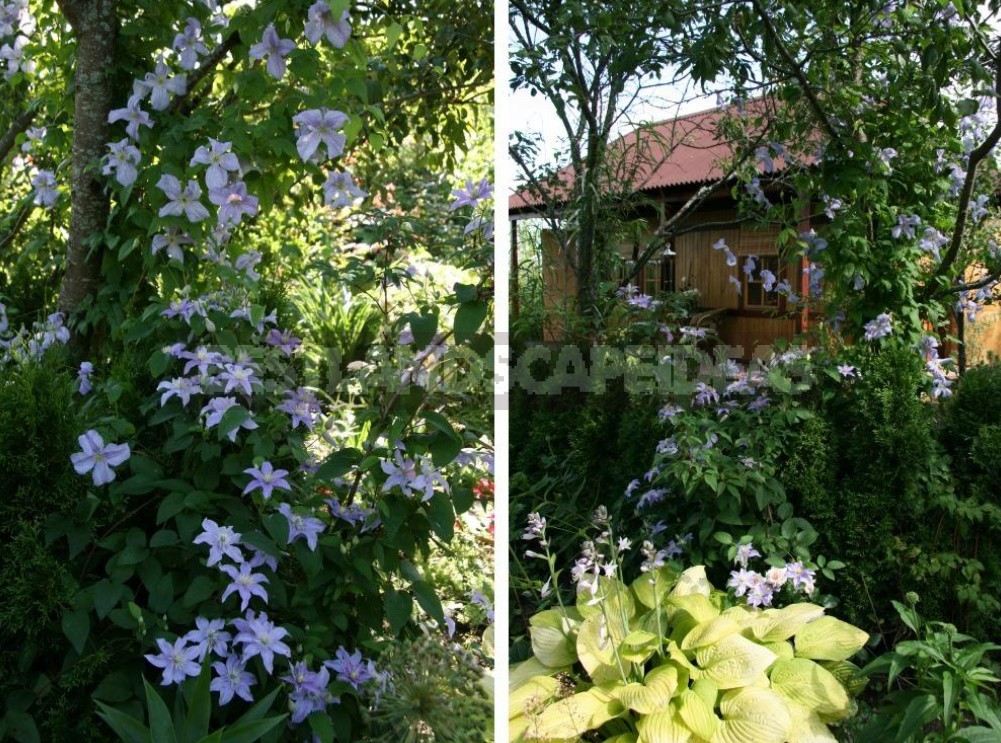 However, the same plant may look different every year. So the variety ‘Justa’ grew for several years in my grassy border between roses, hostas and other perennials, decorating it with a carpet of delicate blue stars on the bright green foliage. And last year, I sent it to the old plum tree, where, together with ’Emilia Plater’, they formed a sky-blue lace along the entire height of the tree and bloomed until the second half of October.

READ  David and Goliath, or How a Chinese Farmer Defeated a Chemical Corporation

I have a special fondness for clematis integrifolia varieties. It differs from its relatives primarily in its life form — it is not a Liana, but an erect semi-shrub with non-twisting petioles, so it needs support. In nature, this plastic species lives among steppe plants, usually not growing above 60-80 cm. Modern varieties differ not only in color and size, shape of flowers, but also in the length of shoots: from 30 cm to 2 m. 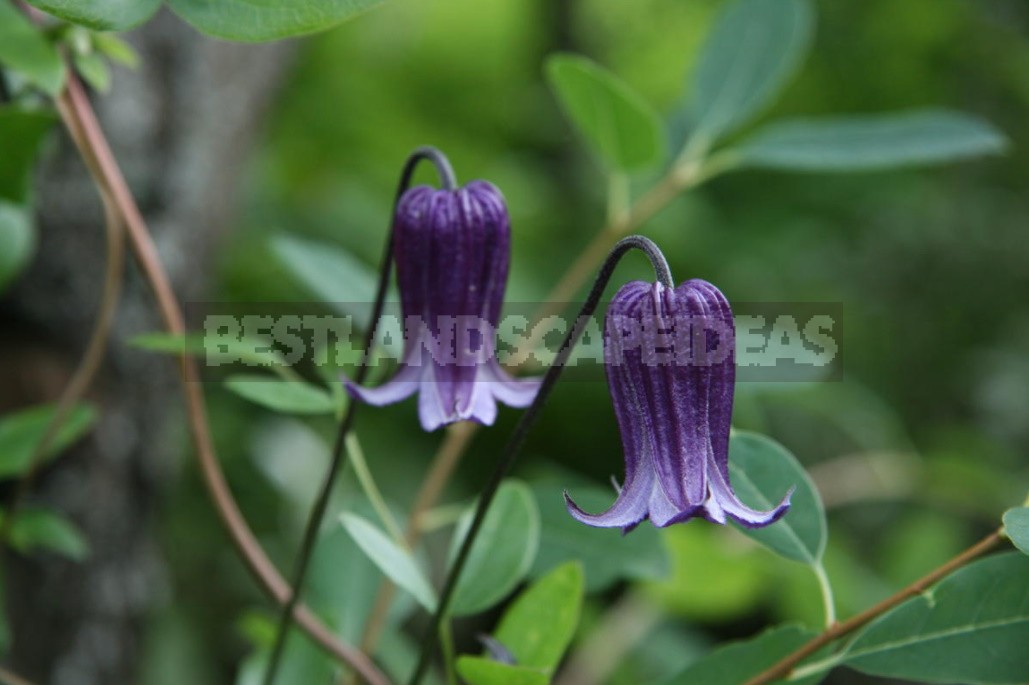 In order not to miss the choice and choose the most advantageous place in the garden, you need to know the characteristics of each variety. Integrifolias are the best partners of roses, they are perfectly combined with any garden plants, fit into mixed borders, and are suitable for ground cover culture. They belong to the 3rd group of pruning, which means that they bloom on the shoots of the current year from June to cold weather.

Among my favorites there are several small-flowered species and varieties, without which I can not imagine my garden. This is of course the purple-leaved form of C. recta ‘Purpurea’. 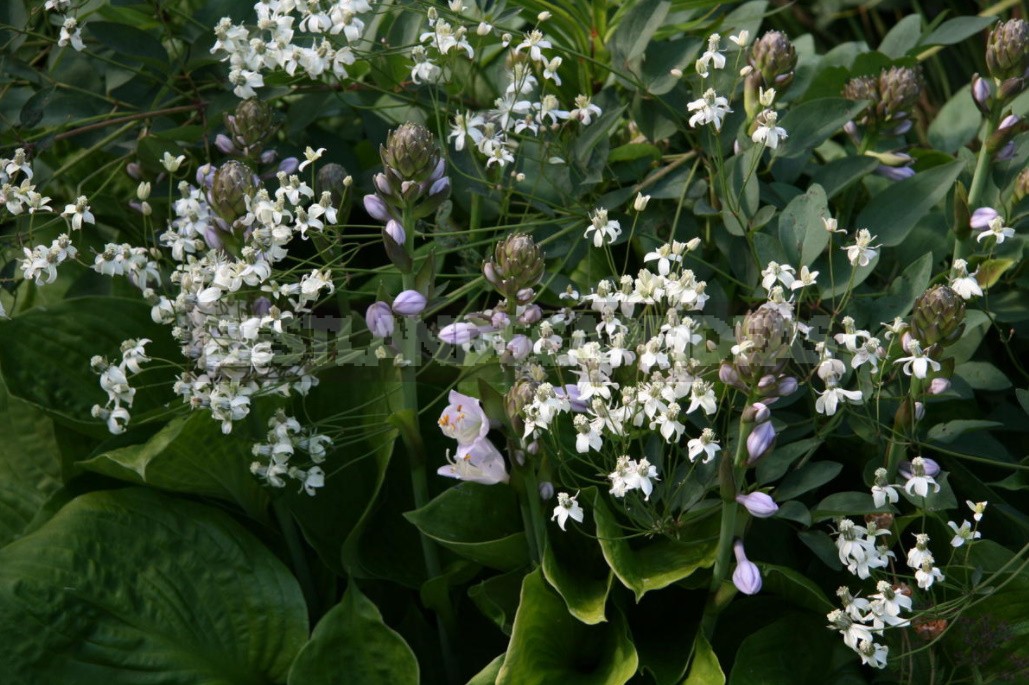 The only clematis of its kind that has an amazing color of young leaves is beet — purple. Its shoots appear from the ground simultaneously with spring bulbs, creating a contrasting background. Later, the color of the shoots gradually brightens, and by the end of June the plant becomes bluish with a slight bronze tint. But at this time, all attention is focused on the incredibly elegant greenish-cream flowers, hundreds of which open, replacing each other over the course of a month. 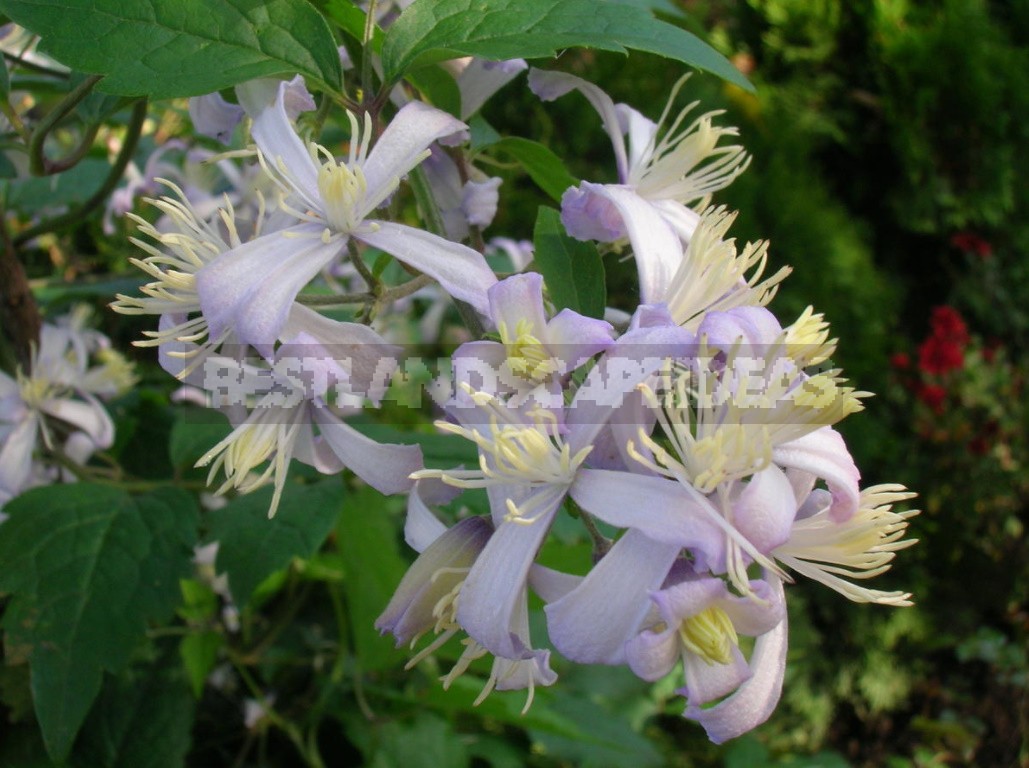 In late summer and autumn, the most delicate flowers of clematis x Jouiniana are pleasing to the eye, derived from C. heracleifolia. I have two varieties of this hybrid series – ‘Praecox’ and ‘Mrs. Robert Brydon’. 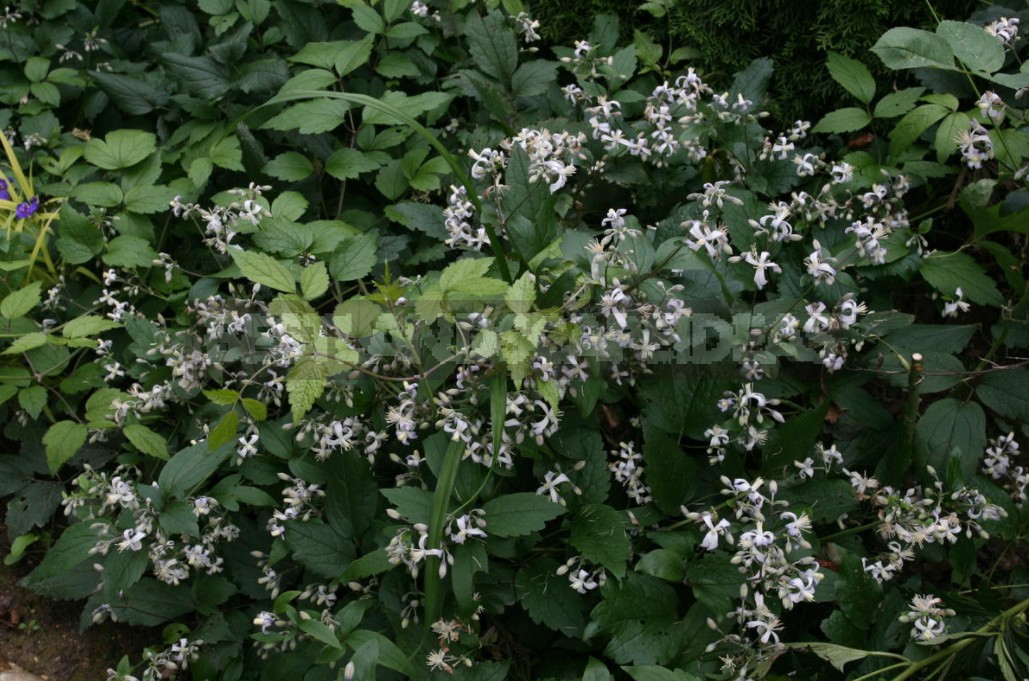 They stand out from the General background of late blooming, small, gently colored flowers with long cream stamens, similar to hyacinth flowers, and a sweet aroma. 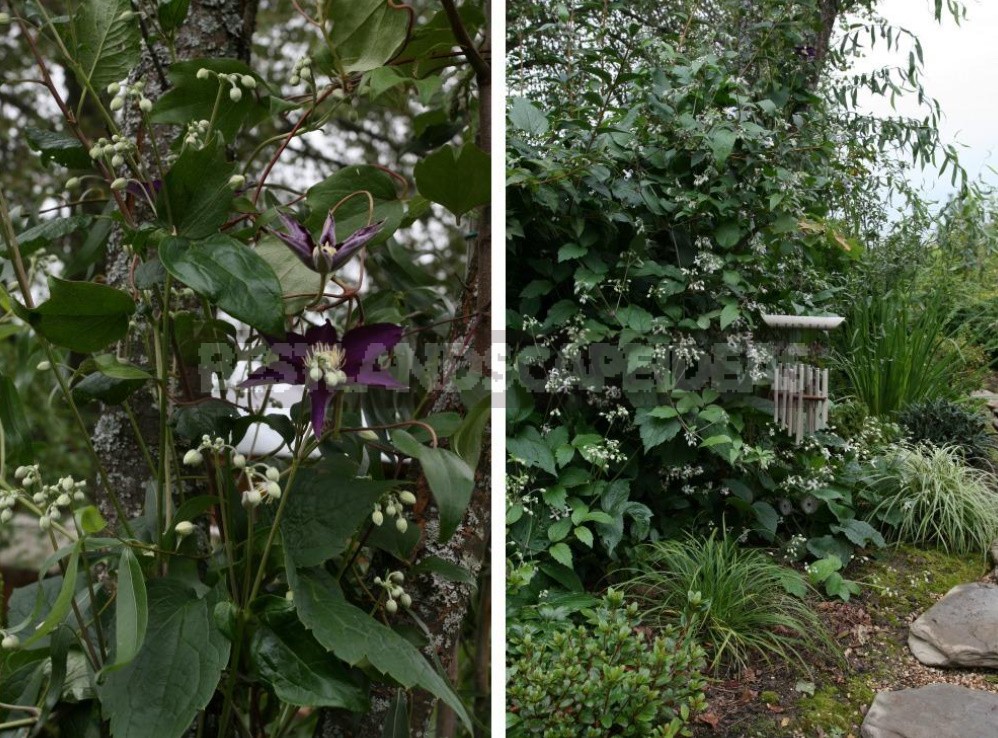 These are erect semi-shrubs with large, leathery leaves and powerful shoots up to 2 m long. Perfectly tolerate shade, immune to diseases. 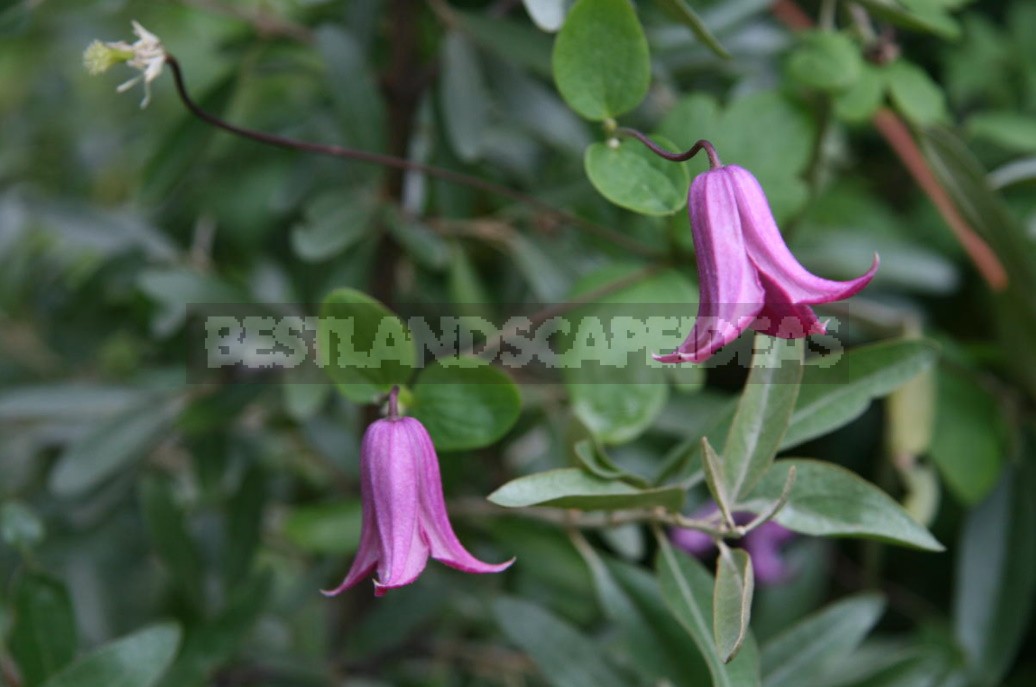 Attractive for its refined shape, pleasant colors, long blooming from June to cold weather varieties ‘Odoriba’ – a hybrid between C. crispa and C. viorna, which appeared in Japan, and ‘Princess Diana‘(Syn. ’Princess of Wales’) — the most popular variety of C. texensis. 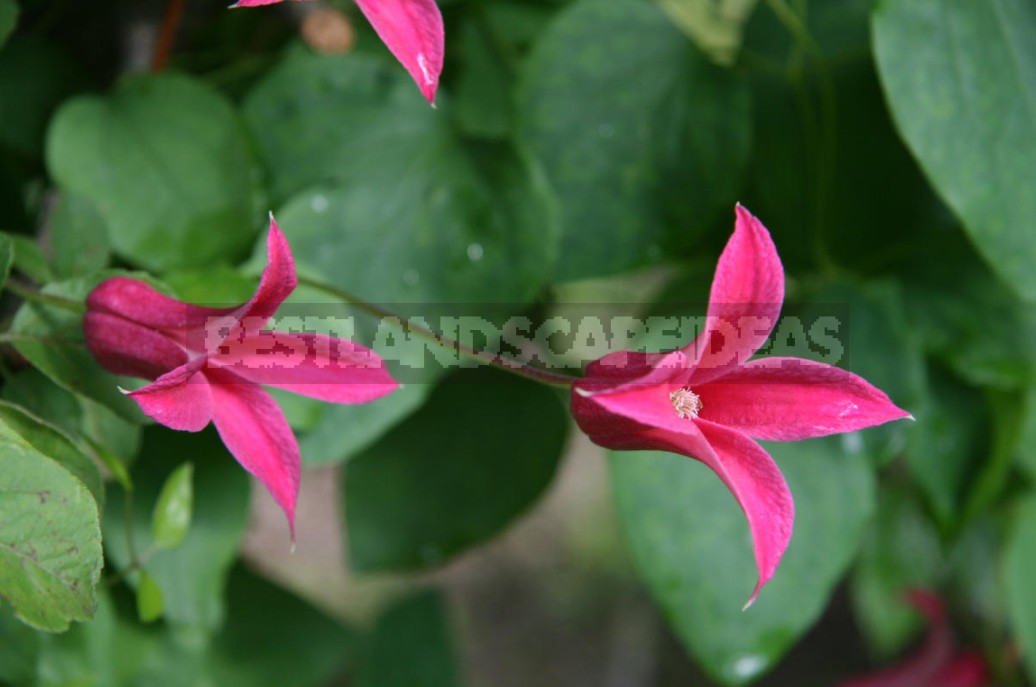 A special place among all clematis is occupied by varieties of C. tangutica. Their main differences are the original shape in the form of a Chinese lantern, all shades of yellow, spectacular copulations that adorn the vines to the snow. Plus – abundant flowering in the second half of summer and autumn and excellent health. 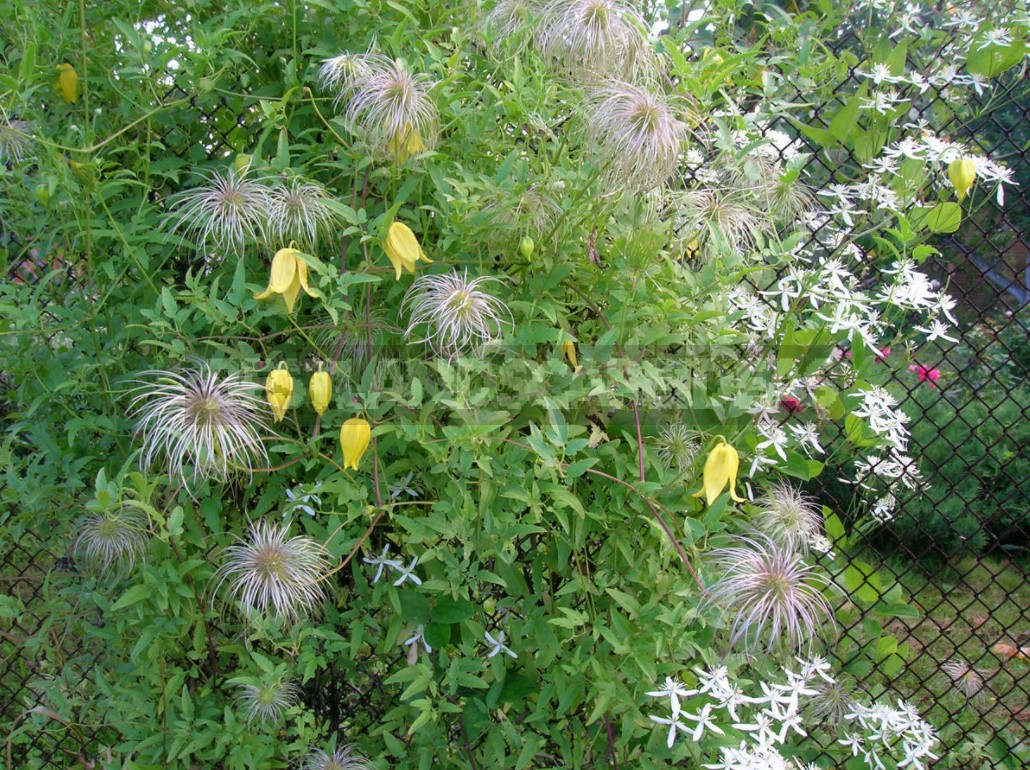 All these clematis belong to the 3rd group of pruning, bloom on the shoots of the last year, need only minimal care and fit perfectly into any composition.

The decoration of the collection, of course, I consider all my Atragene, of which there are already a lot. Amazing plants that consist of some pluses. Amazing beauty of flowers-simple and double, white, blue, pink, purple; beautiful copulation; openwork and very healthy foliage; early flowering. Exceptional frost resistance, which allows you to not remove the shoots from the support, and the ability to develop and bloom perfectly with significant shading. In the warm autumn, repeated flowering is observed. 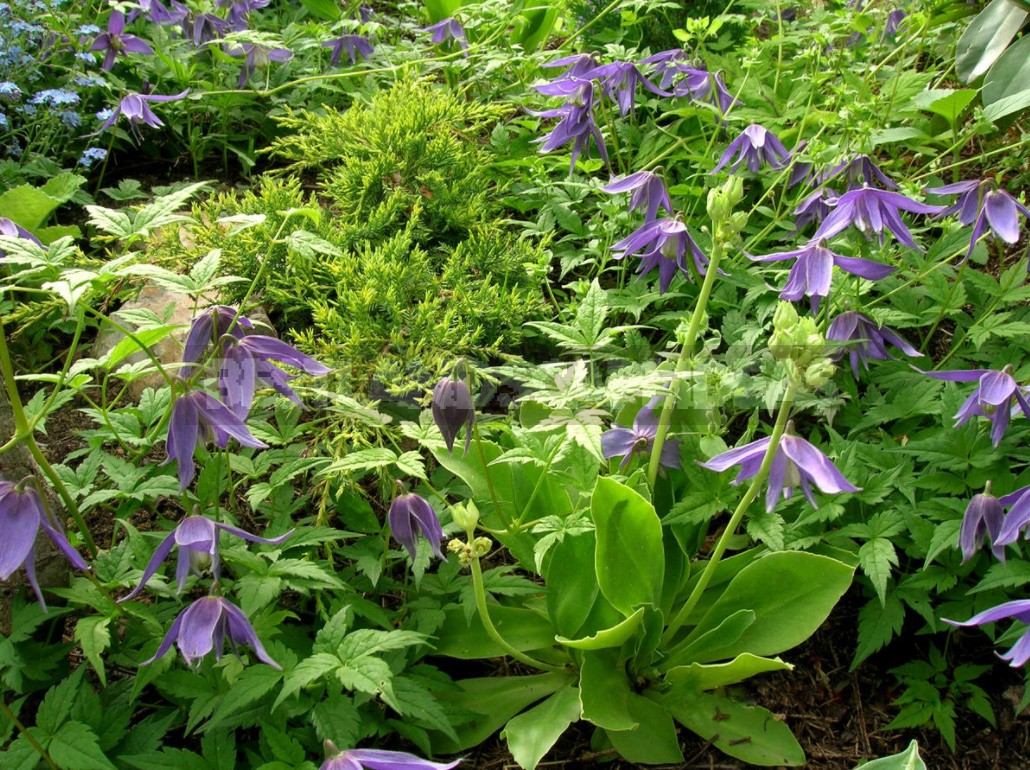 Atragene belong to the so-called 1st pruning group, that is, the shoots are not pruned annually, and once every 4-5 years, you can perform a rejuvenating pruning immediately after flowering.

The famous Japanese master, founder of the Sogetsu school Sofu Teshigahara once said: “Do not strive to work with the new, look for the new in the old.” I suggest you take a closer look at the clematis, which may not have attracted your attention yet. Take a fresh look at those that are familiar and look for new opportunities to place them in the garden. You will discover completely unknown facets of a seemingly long-known plant.