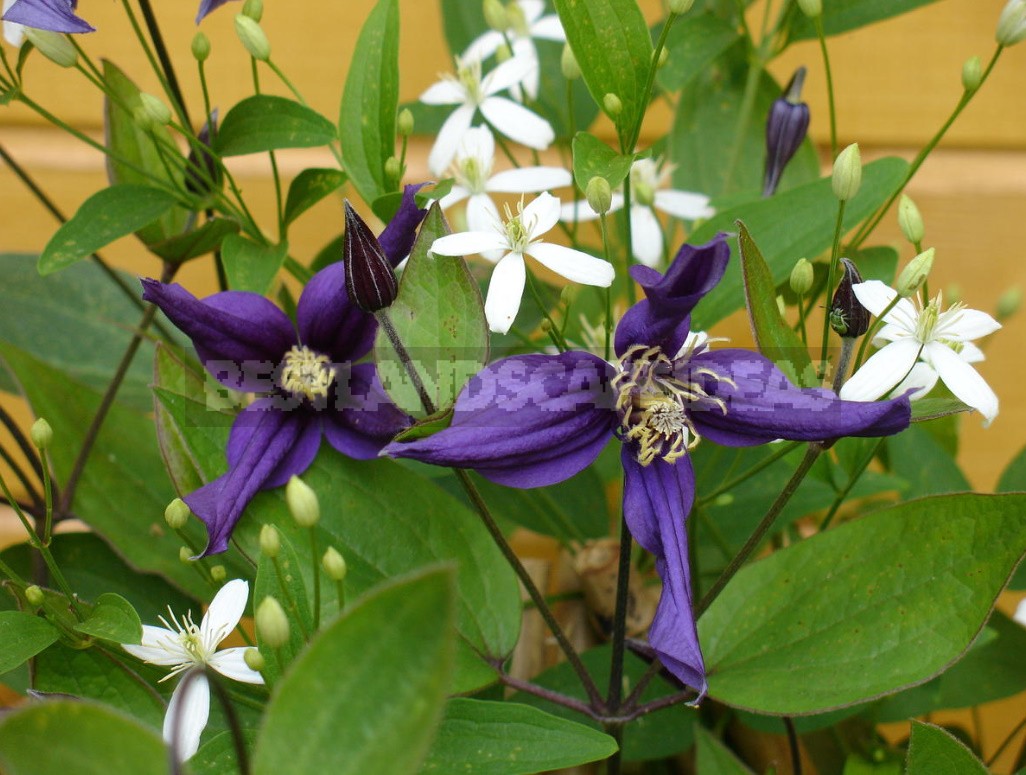 Today I will talk about large-flowered Clematis, which never let me down, every year they bloom profusely and for a long time on the current shoots; most of them are quite resistant to fungal diseases. This is the Clematis of the third group of pruning, which is very simple: in late autumn, all shoots are shortened to the first real leaf. 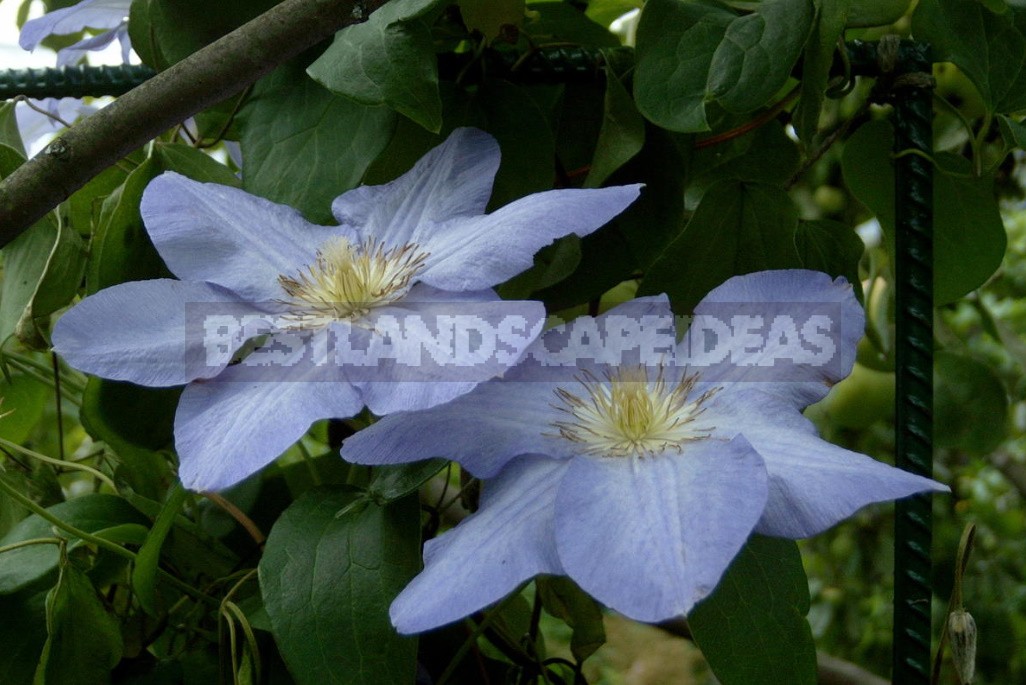 I will start with the varieties of the outstanding Estonian breeder Uno Kivistik, created in 1980-1982. ‘Silmakivi’ I love for the amazing “color of the sky-blue color”, for the beautiful large disc-shaped flowers (up to 20 cm in diameter) with a large-wavy edge, which stand out effectively against the background of thick green foliage. Flowering on current shoots begins in mid-July and continues until September; a third pruning group can be used, although Clematis belongs to the Lanuginosa group. Length of shoots-up to 2 m. 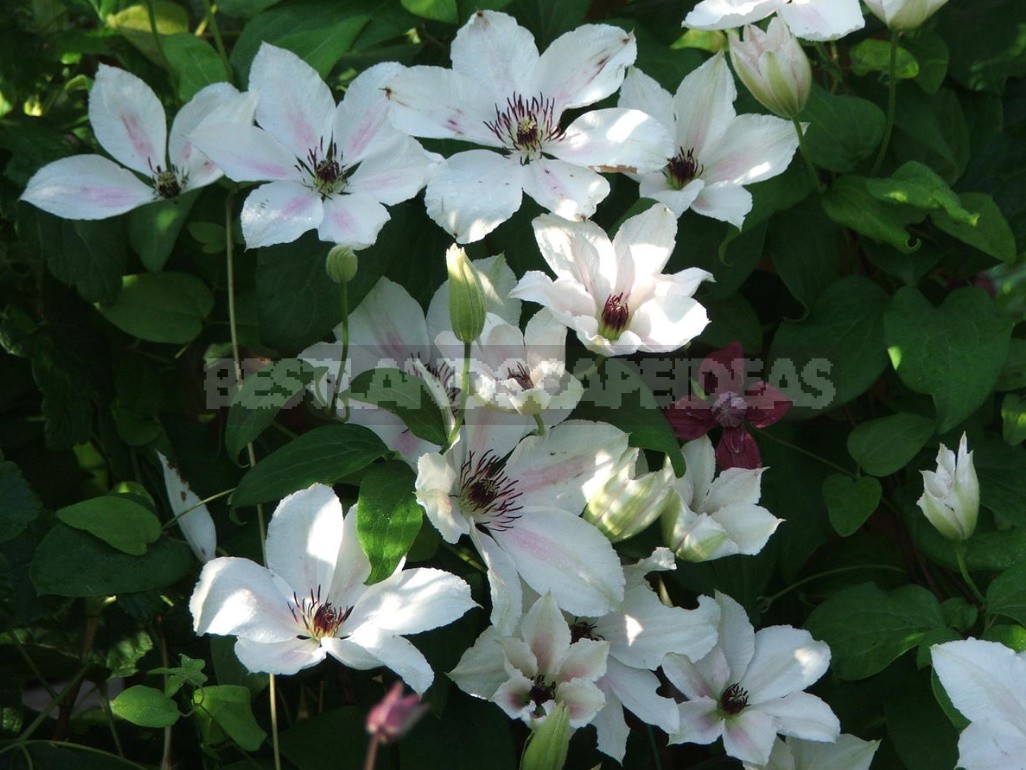 The combination of white, green, red, dark gray-purple is ‘Miikla’. In young flowers (up to 15 cm in diameter), the middle stripe is dotted, red at the base and light green at the tips; it gradually fades, and the flowers become pure white. For an unusual combination of colors, Clematis got the name ‘Miikla’. Flowering is abundant, from early July to September, the length of shoots – up to 1.5 m. 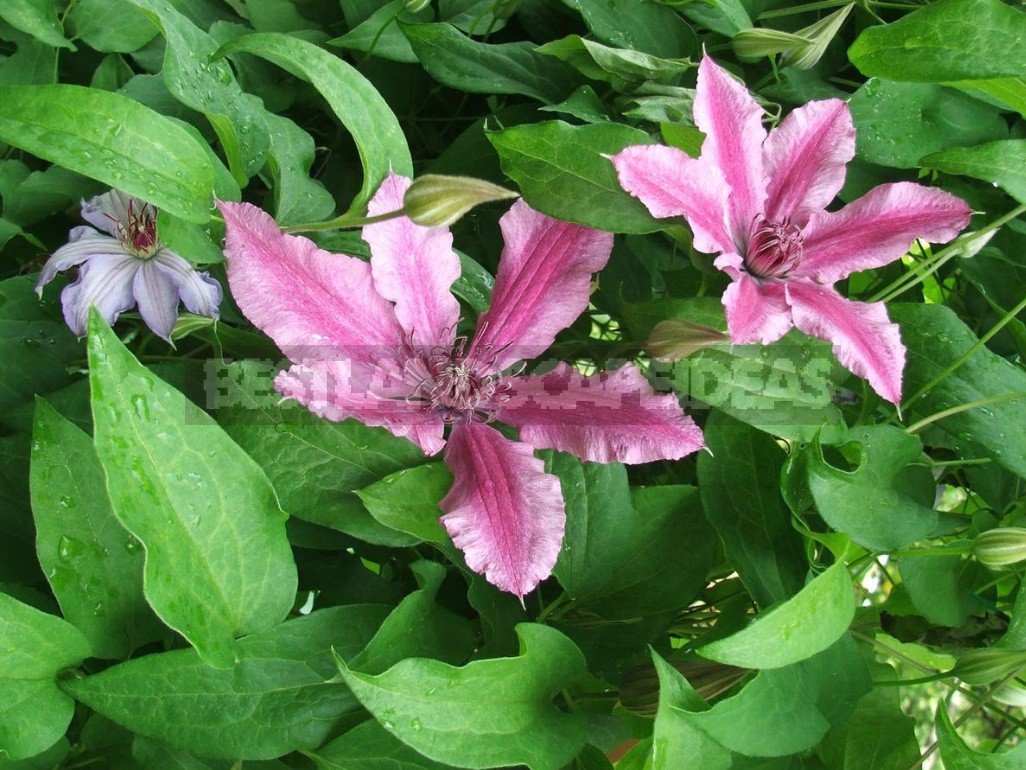 ‘Meeli’ has very large star-shaped flowers up to 22 cm in diameter.. Despite their size, they are very elegant. Swaying on long (up to 17 cm) pedicels, the flowers resemble exotic butterflies. Flowering from the second half of June to September, the length of shoots – up to 2 m.

READ  The Best Varieties of Yellow Roses, or Why You Don't Need a Yellow Garden 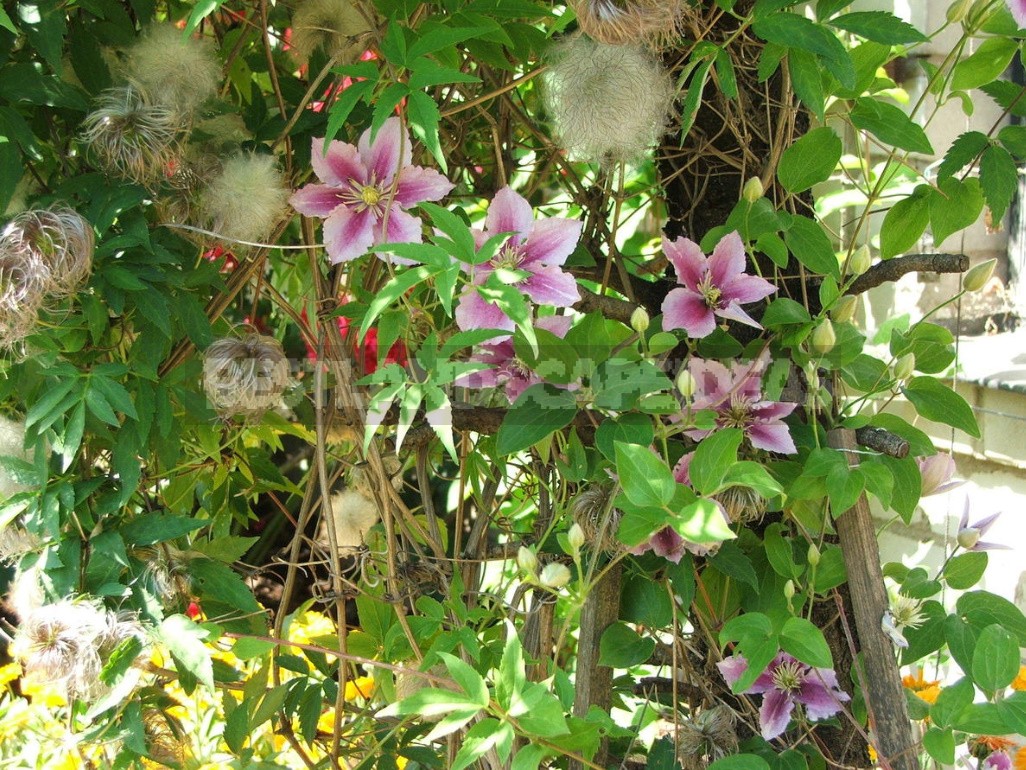 The flowers of this Clematis are bright as stars, and, not surprisingly, ‘Pohjanael’ is Estonian for ‘Northern star’. Large (up to 18 cm in diameter), they stand out effectively against any background. Length of shoots – up to 2.5 m. 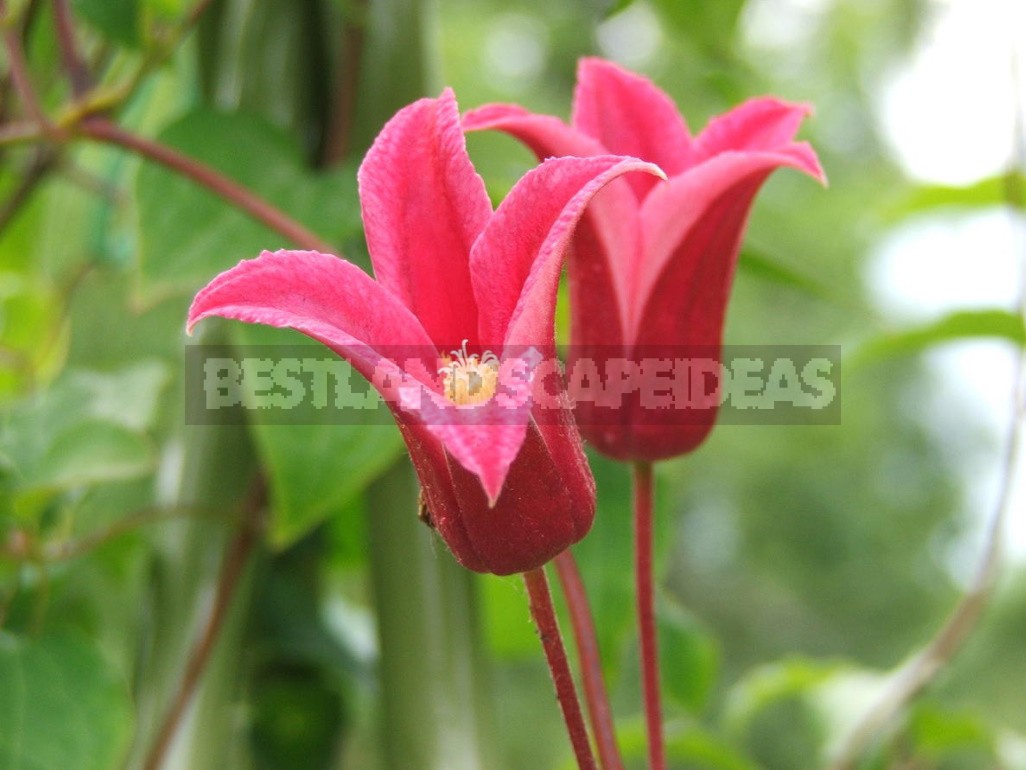 For the past three years, I have never stopped admiring Clematis ‘Princess Diana’. This is not a large-flowered Clematis, it belongs to the Clematis texensis group, which was alarming to me, because earlier plants of this group were not cultivated in the middle zone. The excitement was in vain — the plant perfectly survived three very different winters. Many small (6-7 cm) lilac-colored tulips of amazing crimson-pink color bloom from July to mid-September, the Liana reaches 2.5 meters, grows in the sun and in partial shade. I consider this variety to be the most elegant Clematis I have ever known.

Now about the most unpretentious, abundant and long-flowering varieties-clematis viticella. 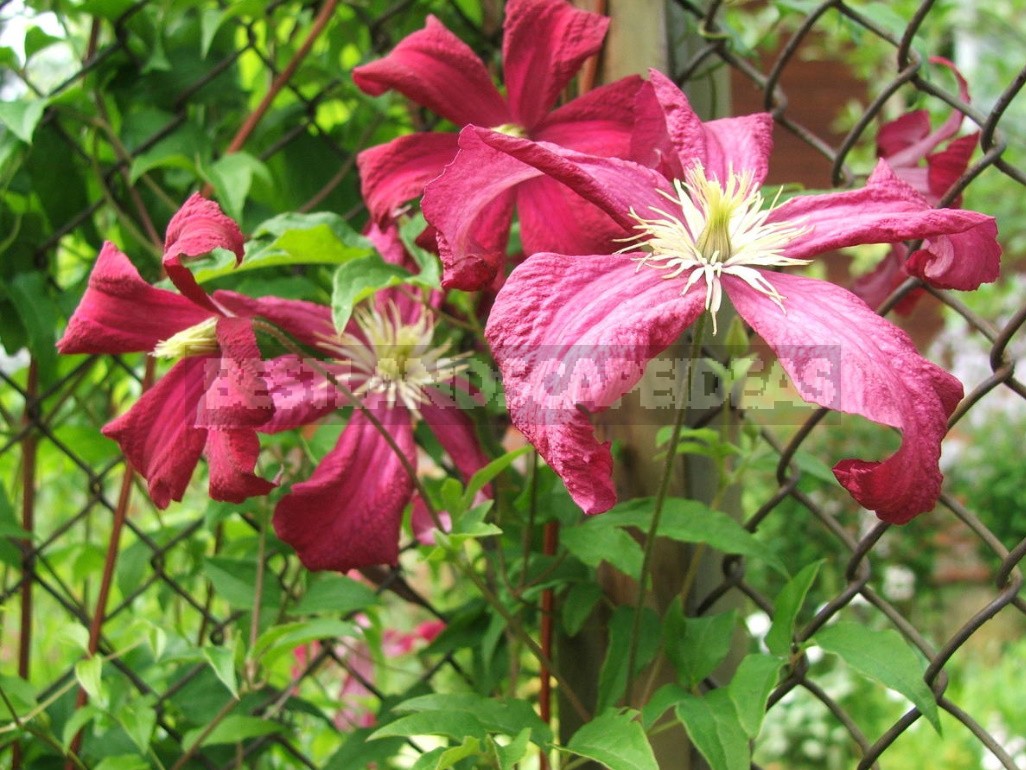 The age of the old French varieties ‘Madame Julia Correvon’ and’ Venosa Violacea’ and the old Dutch ‘Margot Koster’ is more than 100 years. How much time has passed, and they are still good and in demand until today. The flowers of ‘Madame Julia Correvon’ may not be so spectacular compared to modern Terry varieties, but the beautiful wine-red color, the compressed texture of the sepals, and the long pedicels make the variety very attractive. The diameter of its flowers – up to 10 cm, the length of shoots – up to 3 m. Flowering is abundant, from early July to October. 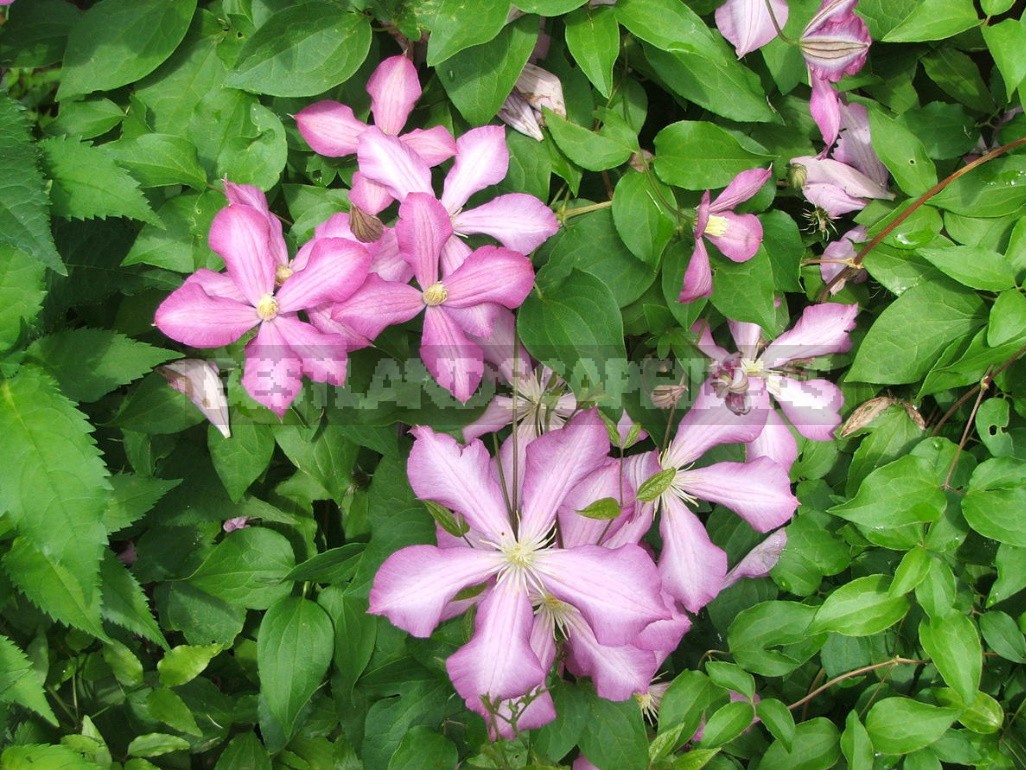 The ‘Margot Koster’ flowers are large (up to 15 cm in diameter), flowering is abundant, from late June to mid-August. Length of shoots – up to 2.5 m.

READ  Caring for Roses in September: Start Preparing for Winter 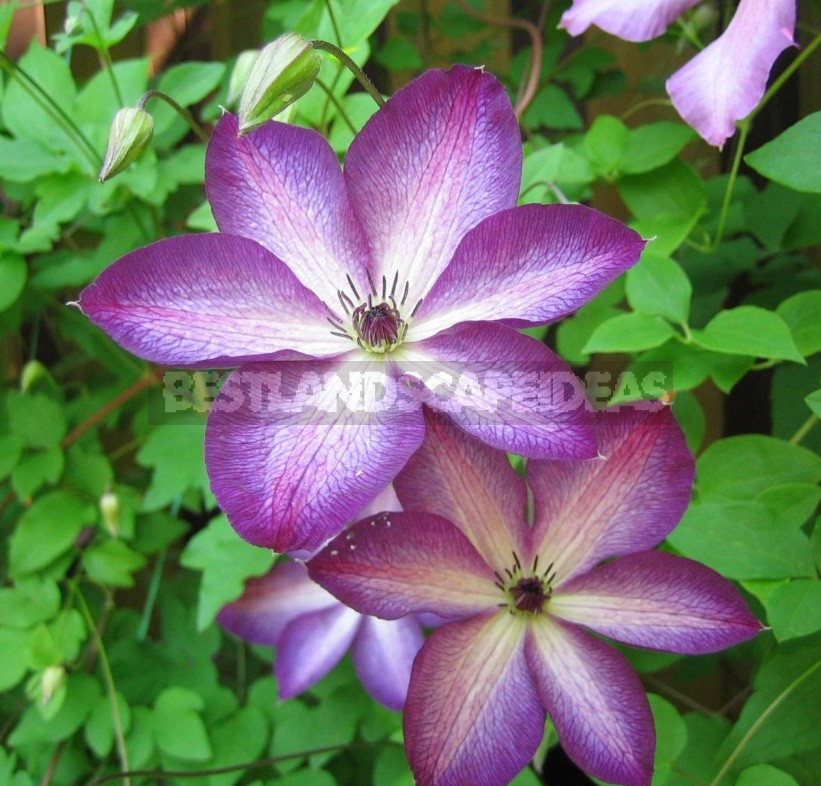 ‘Venosa Violacea’ is one of the best two-color varieties. The diameter of its flowers is up to 13 cm, the length of shoots is up to 3 m. Flowering is abundant, from July to October. 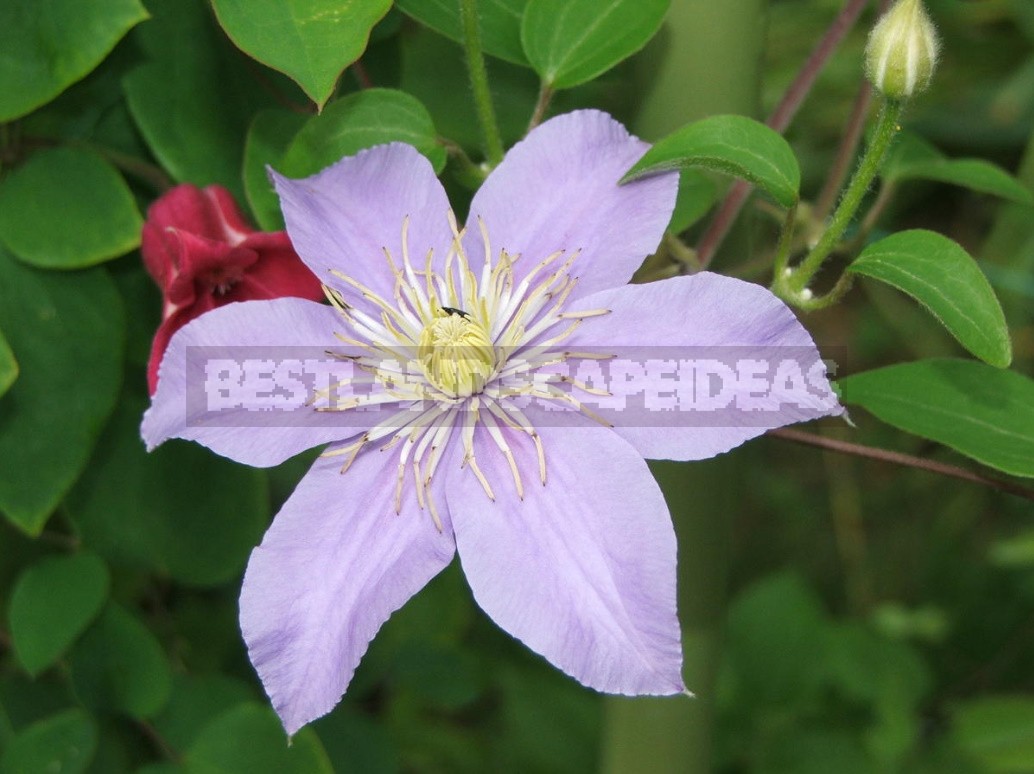 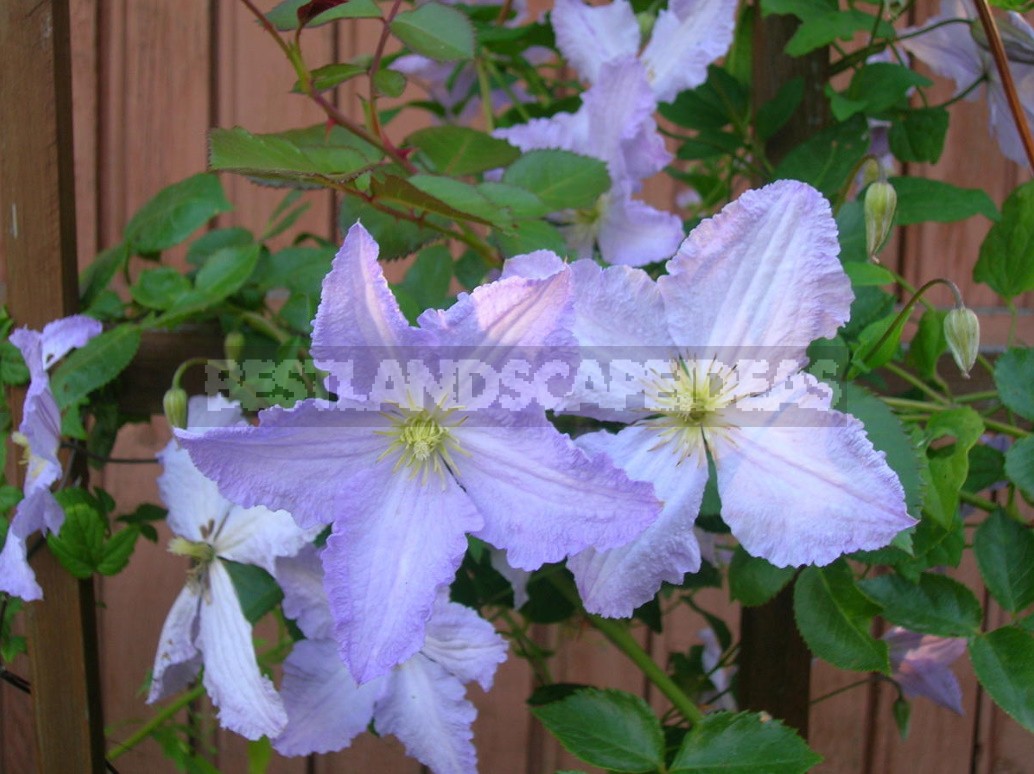 ‘Blue Angel’ – delicate flowers up to 12 cm in diameter with an Assembly on the edge of the sepals abundantly cover shoots up to 3 m long. 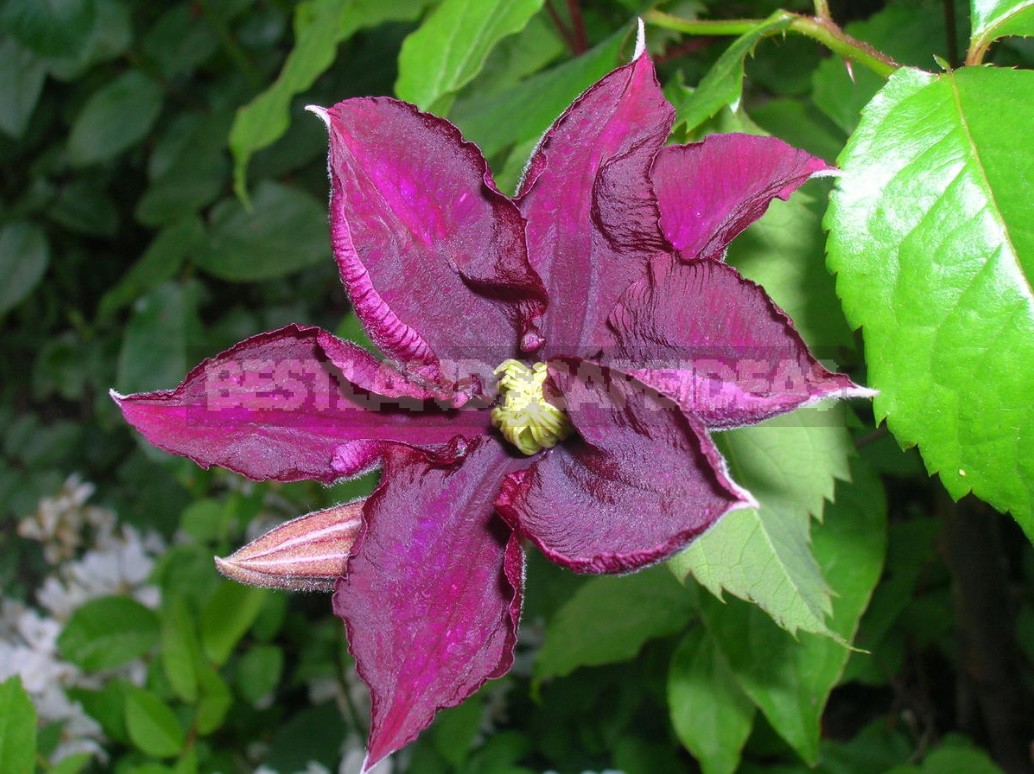 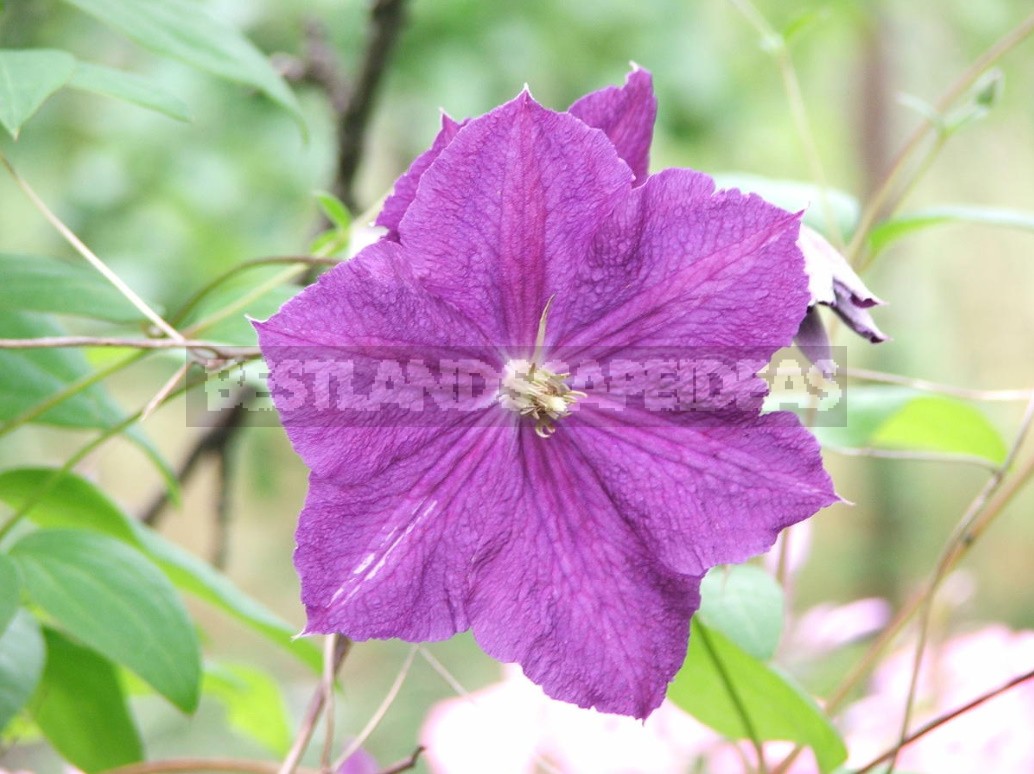 ‘Victoria’ is an old variety that has become a classic. It has the highest flowering coefficient; the diameter of the flowers is up to 14 cm, the length of the shoots is up to 3 m. 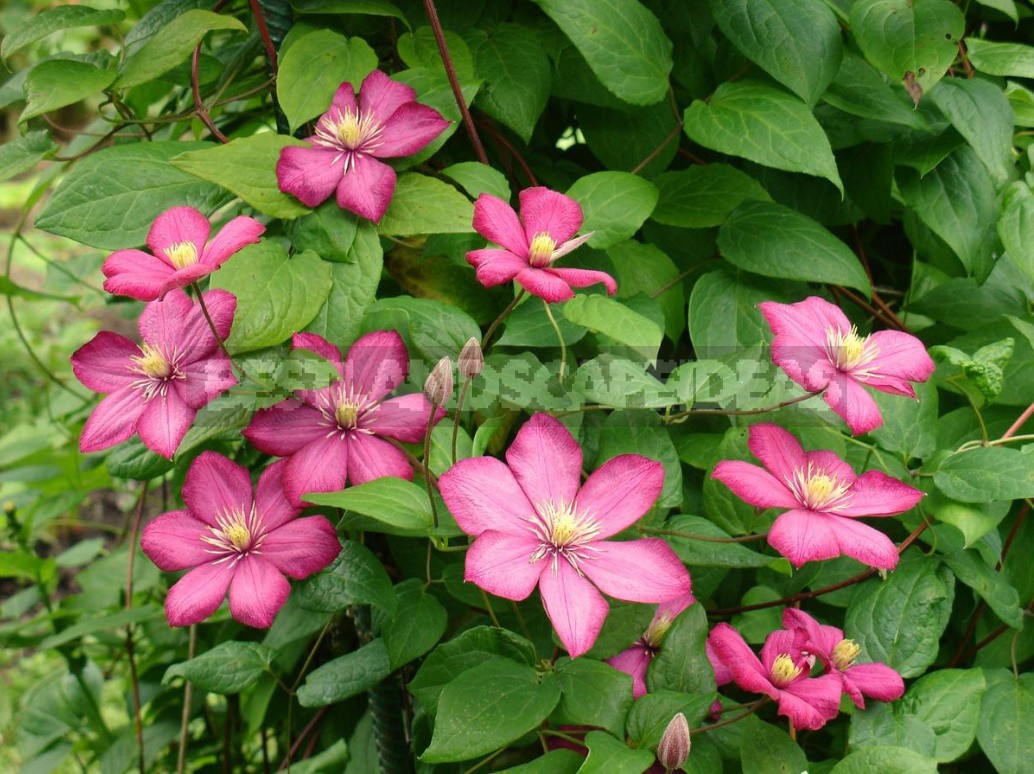 ‘Ville de Lyon’ — another old, but still popular variety that has not lost its originality, blooming profusely. The diameter of the flowers is up to 15 cm, the length of the shoots is up to 3 m. 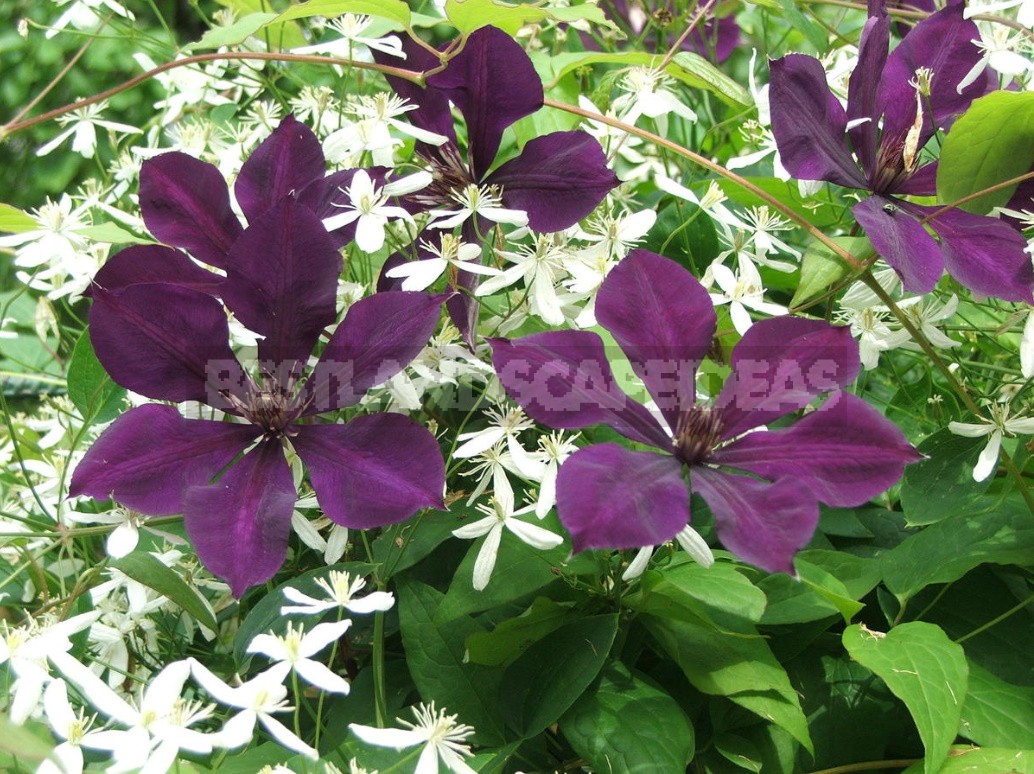 ‘Gipsy Queen’ – velvety flowers up to 15 cm in diameter appear in late July. A fine variety for late summer and autumn. Length of shoots-up to 3 m. 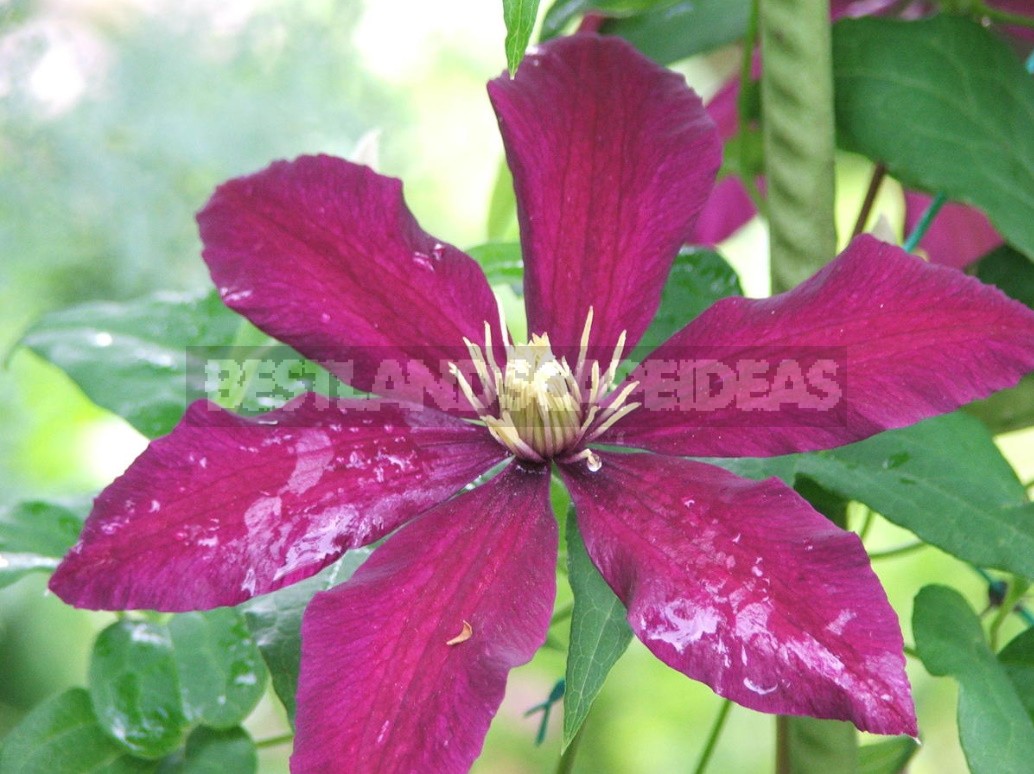 ‘Niobe’ is one of the two surviving varieties of the Polish breeder W. Nool. Gold medal in the Netherlands in 1978. The diameter of the flowers is up to 17 cm, the length of the shoots is up to 3 m.

READ  Such a Different Mint 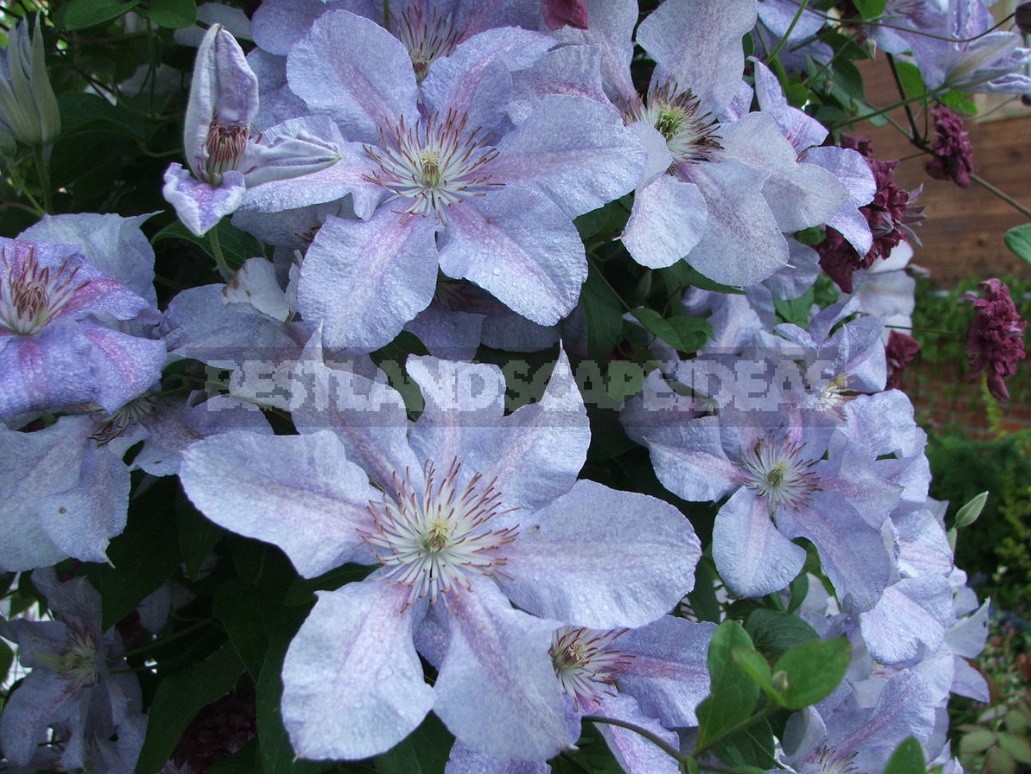 ‘Teksa’ — an unusual and original color of flowers — blue in a small point-resembles denim. The diameter of the flowers is up to 15 cm, the length of the shoots is up to 3 m. 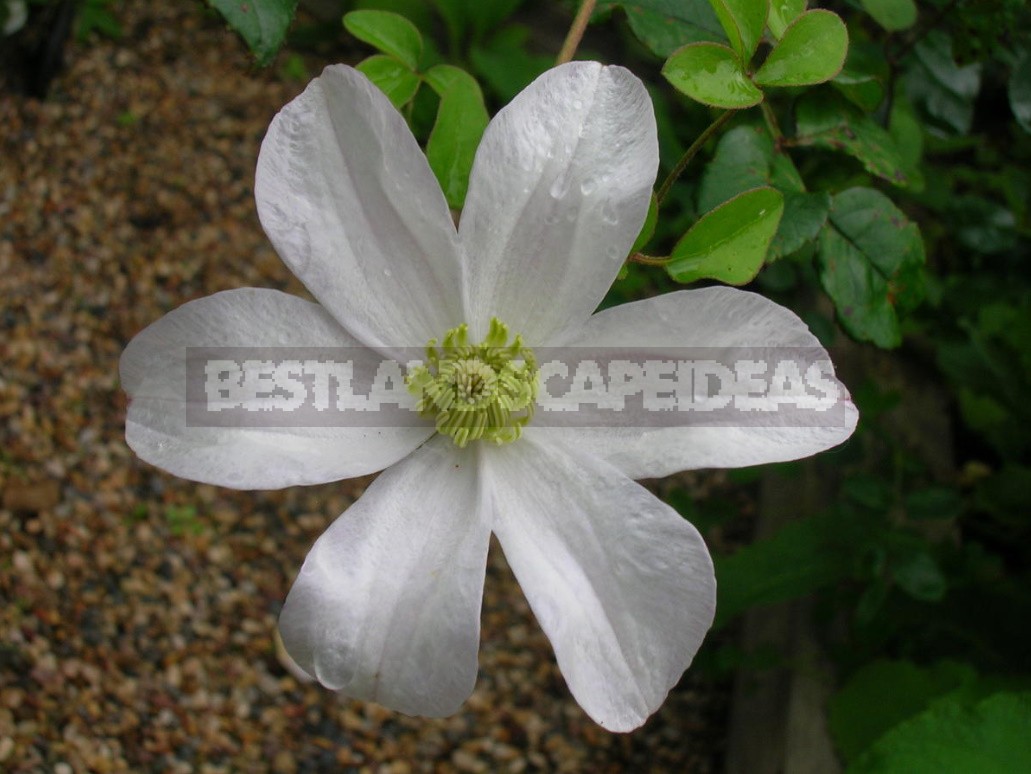 ‘Huldine’ — white with a slight pink tinge flowers up to 10 cm in diameter, abundant flowering in August and September. Length of shoots-up to 3 m. 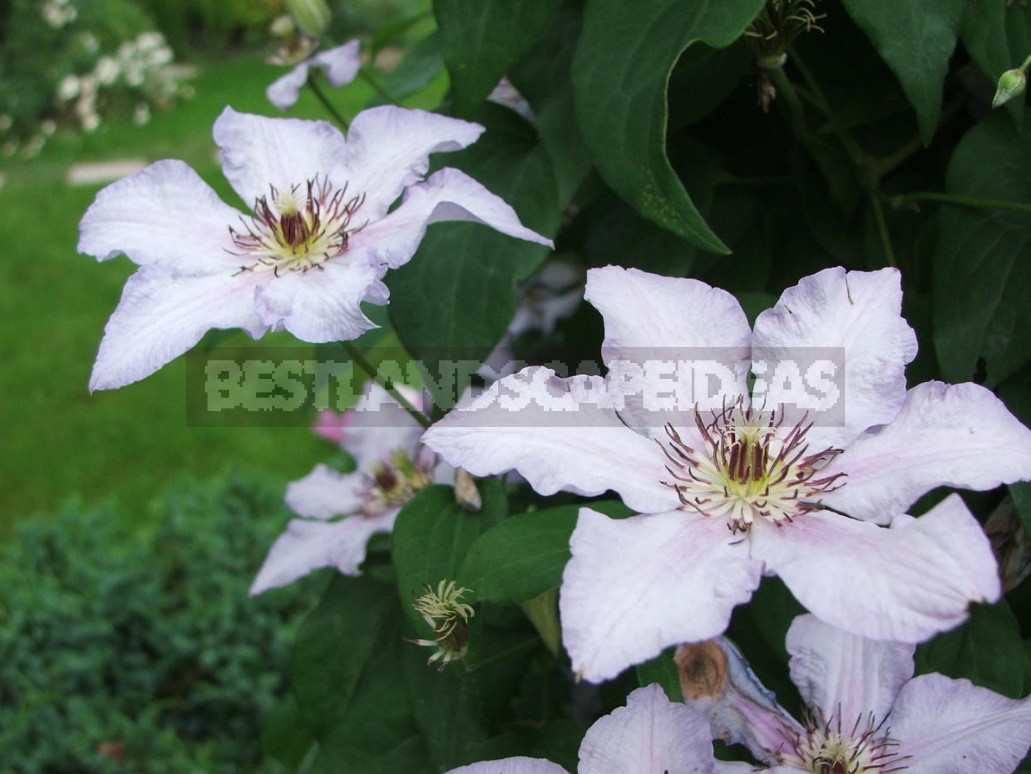 ‘Ekstra’ – extra is extra! It is distinguished by corrugated sepals. Flowers up to 14 cm in diameter, shoots up to 3 m long. 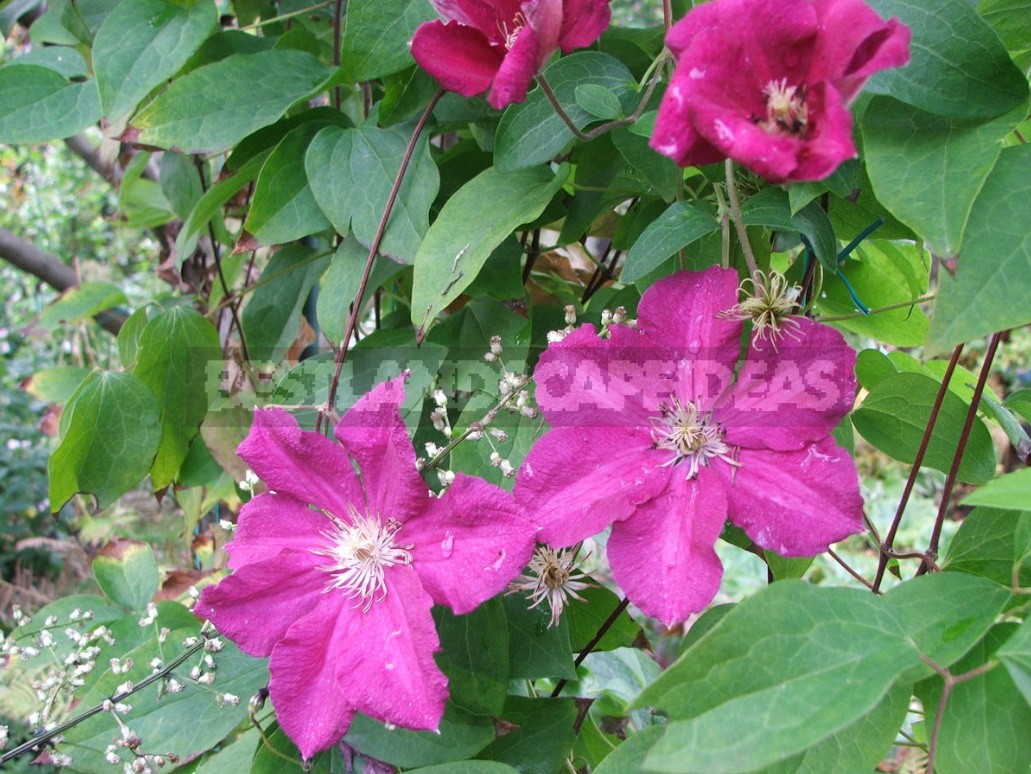 ‘Ernest Markham’ blooms profusely in August and September. It is the parent plant for more than 20 Clematis varieties. The diameter of the flowers is up to 17 cm, the length of the shoots is up to 3 m. 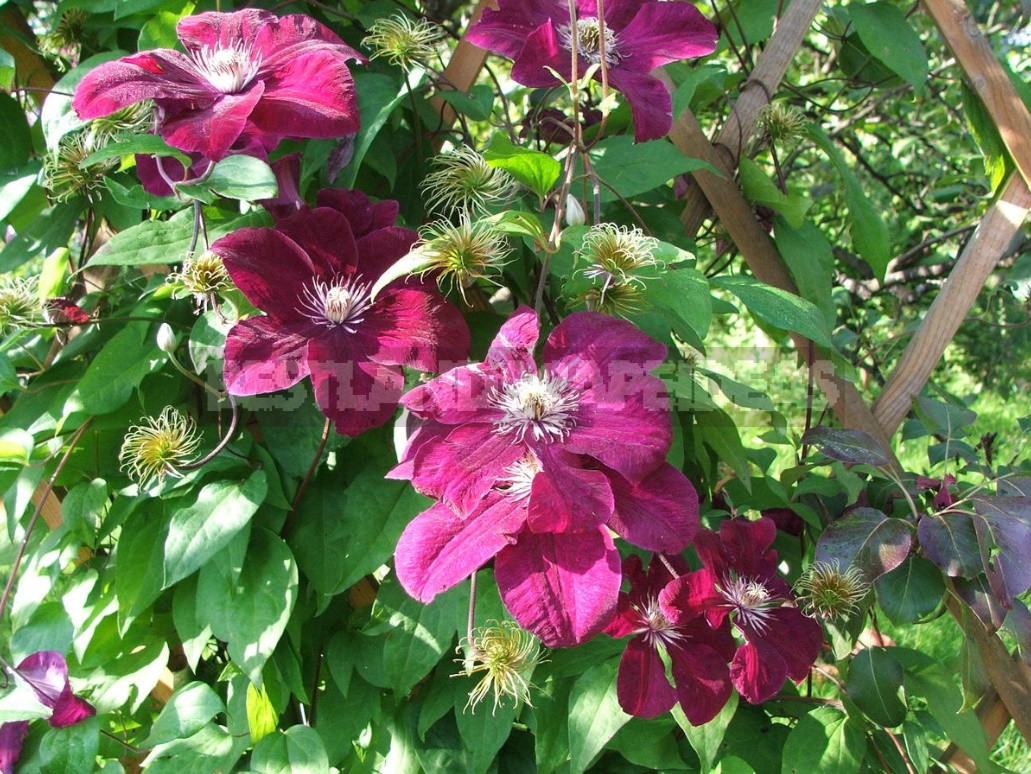 Such different varieties — but each of them can be called a favorite.