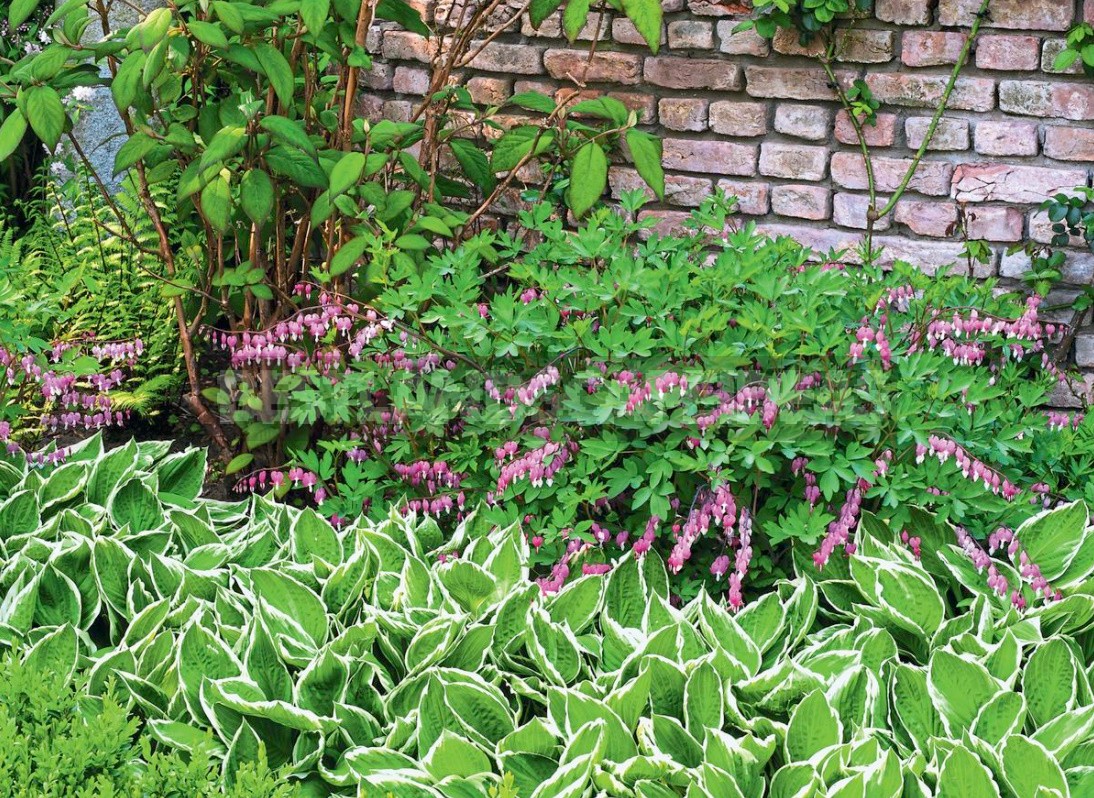 Perennial plants are a godsend for gardeners who do not have enough time to take care of the site. Such “pets” do not cause much trouble and delight the eye with a lush “hair” from year to year. And there is much to choose from!

Herbaceous perennials are a glorious numerous “tribe” that can satisfy the most demanding requests of gardeners. A suitable candidate can be found for decorating any garden corner, whether it is a sunny flower garden near the terrace, a coastal area of a pond or a tree trunk circle of a shady tree. Actually, this is an axiom: it is based on the conditions that you should select representatives of the flora, because only in a suitable place green wards in full force and with enviable constancy reveal all their talents.

In the photo: even a narrow strip of land can be luxuriously decorated. Two boxwood balls are accompanied by lupines ‘Masterpiece’ and medium-sized irises with dark purple flowers. The airiness of the landing is given by Anthriscus sylvestris ‘Ravenswing’. In the foreground flaunts pink Persicaria affinis. 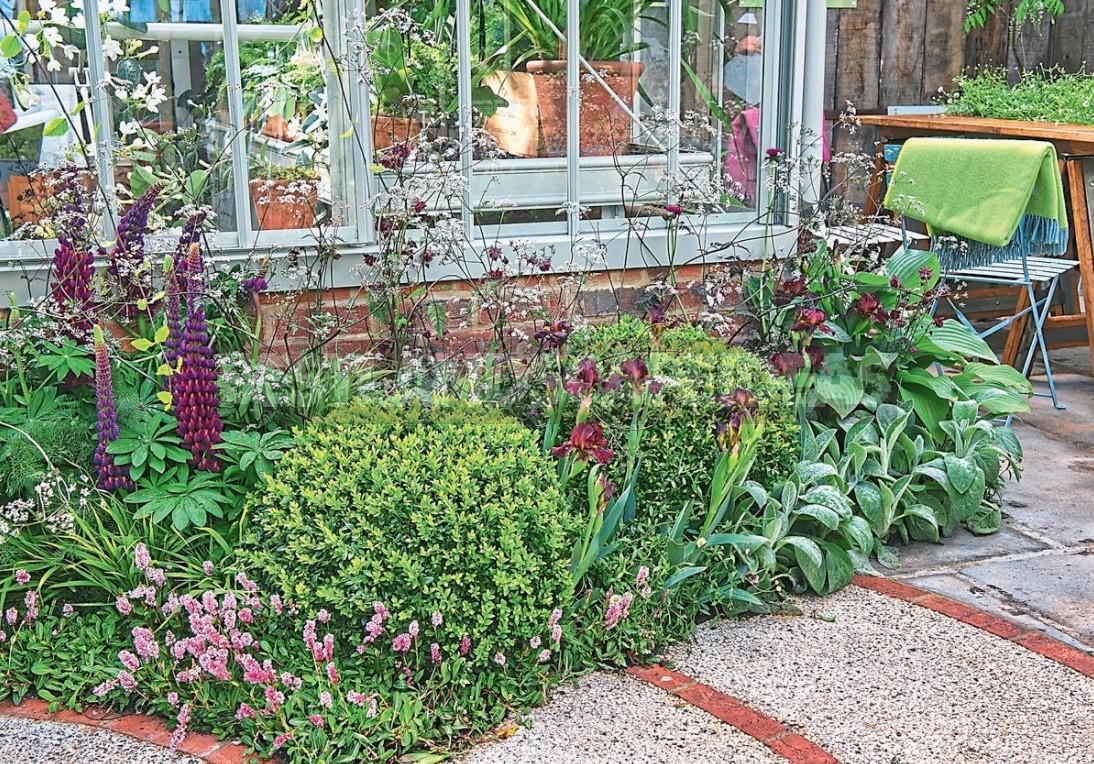 So, having planted a peony or a daylily in the shade just because you need to fill a clearing in the flower garden, you will not wait for a violent flowering. Conversely, if astrantia or astilba are given a sunny corner, they will certainly survive, but soon spoil the appearance of planting with leaves that have turned brown due to the heat and drought. These plants feel much better in partial shade, brightening it with white, pink and red inflorescences.

In the photo on the left: in the mini-flower garden on the border of the recreation area and the wall of the house, the terry aquilegia ‘Black Barlow’, Salvia stepposa and Centranthus ruber settled. Right: purple Allium aflatunense and onion pink along with blue Amsonia tabernaemontana, irises and other perennials fill the garden with bright colors. 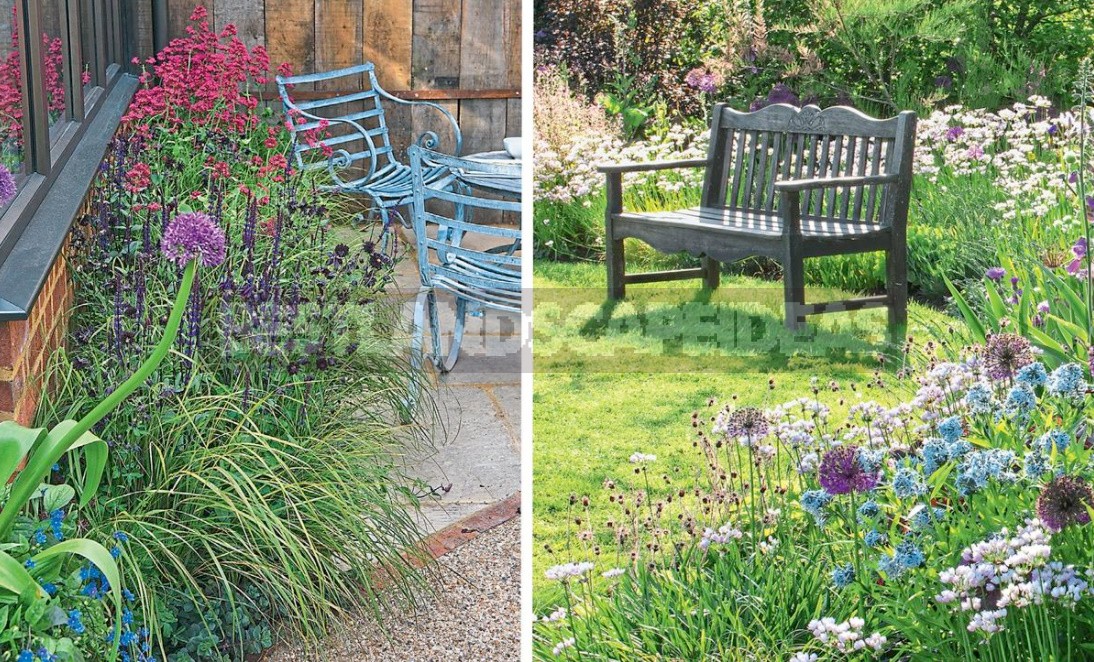 Compatibility of partners plays an equally important role. For example, elegant crumbs should not be planted next to actively growing neighbors, otherwise you will have to use a shovel every now and then to restrain the speed of the “security forces”, keeping a distance from the tender babies. On the other hand, the different activity of the inhabitants of flower beds can and should be used. For example, Papaver orientale loses its decorative effect after flowering. In this case, geraniums and catnip will come to the rescue, covering an unpresentable neighbor. A similar effect will be achieved by decorative herbaceous perennials, if they are planted in front of heleniums or asters of tall varieties, which often bare the lower parts of the stems.

In the photo on the left: an old galvanized bucket turned into a mobile flower garden with pink-Digitalis purpurea and Primula vialii. Tip: if you have not previously made drainage holes in the container, water the plants moderately so that moisture does not stagnate.

Step paths will look more original if the plates are laid out in the form of waves washing the vegetable peninsulas. In the photo on the right, Primula bulleyana with orange and red flowers, blue Camassia and yellow-green hosta ‘Paul’s Glory’make you slow down. 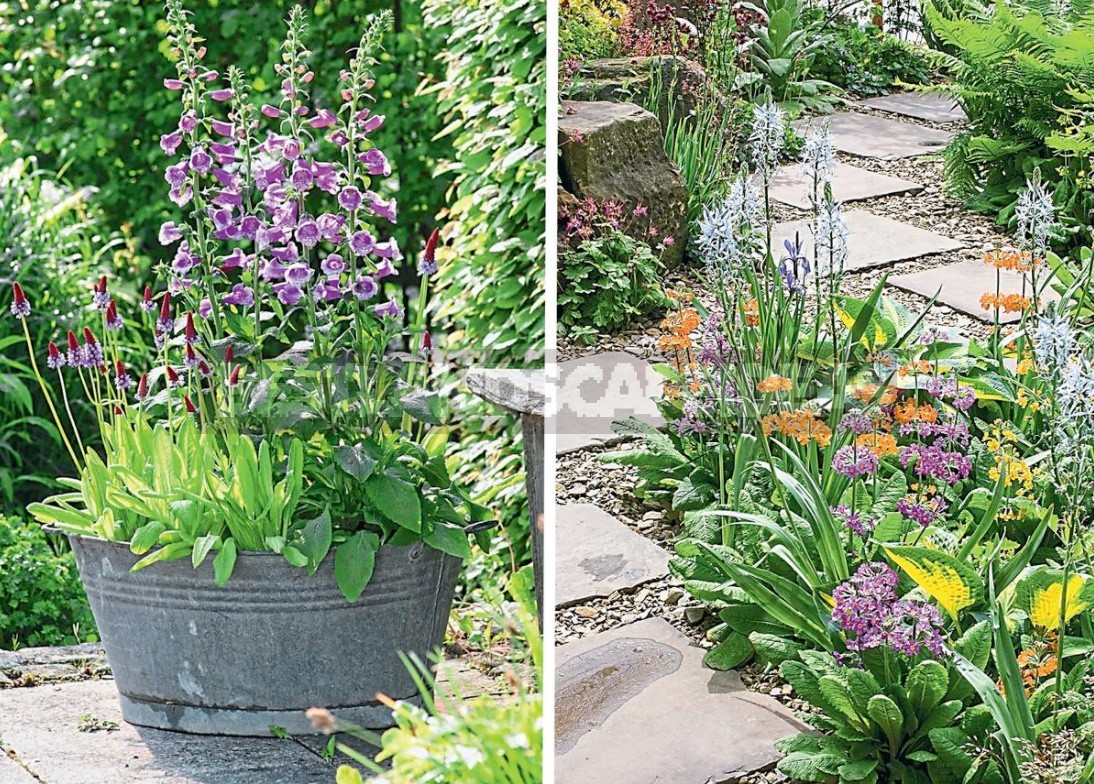 Herbaceous perennials are also indispensable in plantings with spring-flowering bulbous plants. After all, when the latter appear in all their glory, the former only awaken. Later, our heroes cover with their magnificent attire the early beauties who have already played their role in the spring performance. Tip: to enhance the effect of bulbs, it is better to plant in small groups and duplicate them in the flower garden.

In the photo on the left: two tall irises are matched in tone – ‘Big Squeeze’ with flowers of rich color and salmon’Island Sunset’. In the photo on the right: the “wild” charm of pinkish-purple Iris sibirica’ Sparkling Rose ‘ emphasizes the sky-blue Linum perenne. Both plants bloom at the same time, are undemanding in care and prefer sunny corners in the garden. 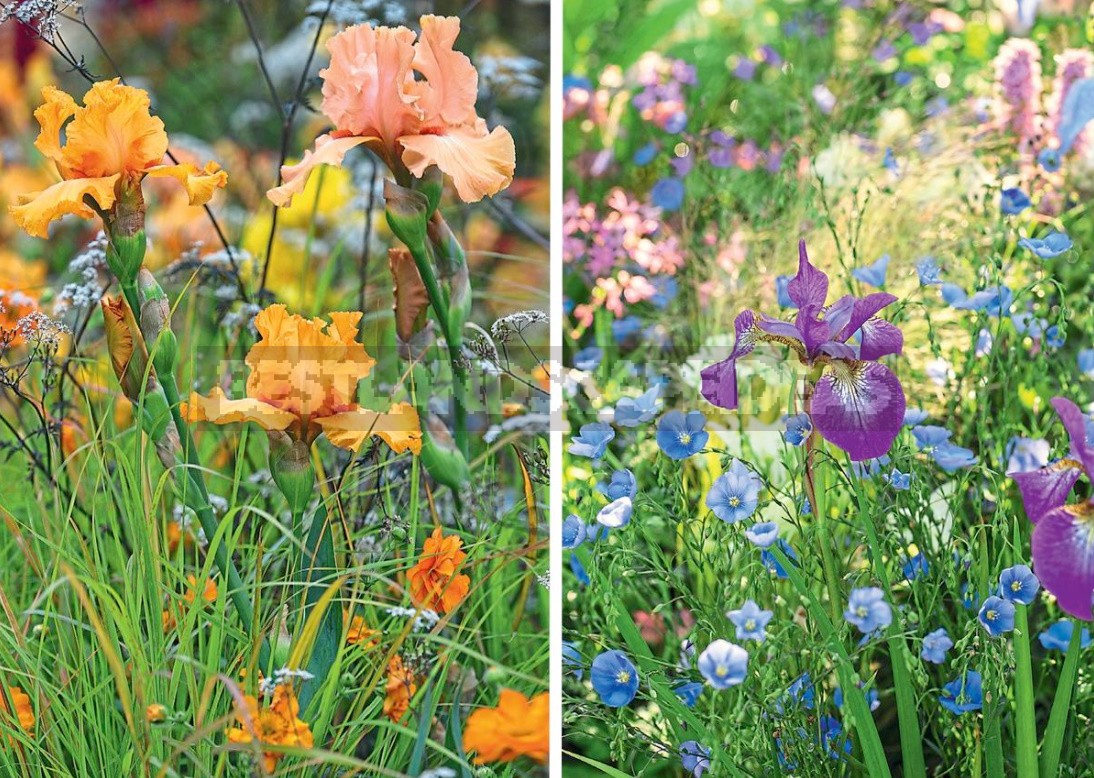 In the mix of long-lived and short-lived plants, too, there is nothing contradictory. On the contrary, while Anemone japonica, peony and rogersia will come into force, their fast-growing counterparts aquilegia, lupine and centranthus will fill the empty space in the flower garden.

By the way, this trio, as a rule, does not stay in the same place for a long time, wandering through the territory by self-seeding. If this is not desirable, the plants should be cut immediately after flowering. Do you want surprises next year? Let the “flyers” scatter around the site and surprise you with their appearance in the most unexpected places.

Mission accomplished: a well-coordinated team for challenging conditions under the bush 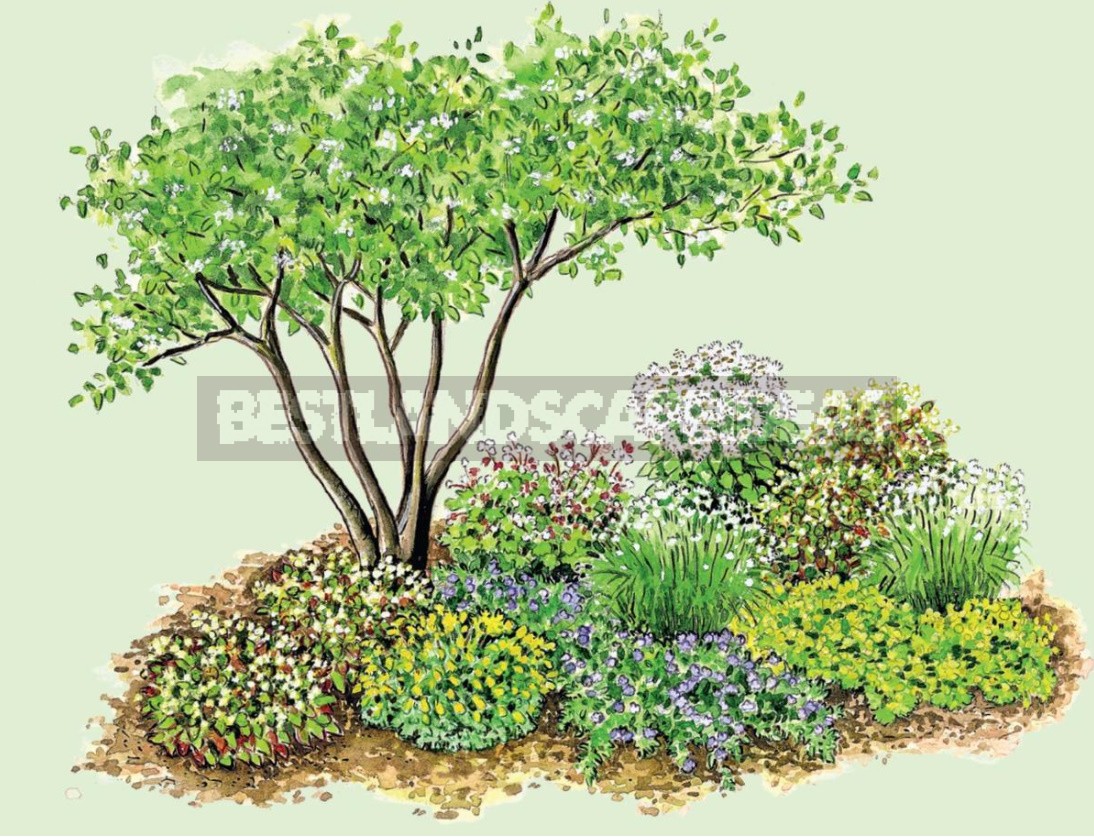 3. Epimedium x versicolor ‘Sulphureum'(flowering: May-June, height: 35 cm, 4 copies) fascinates with light yellow flowers and red-green leaves. Although the plant seems fragile, in fact it is characterized by resistance and endurance. 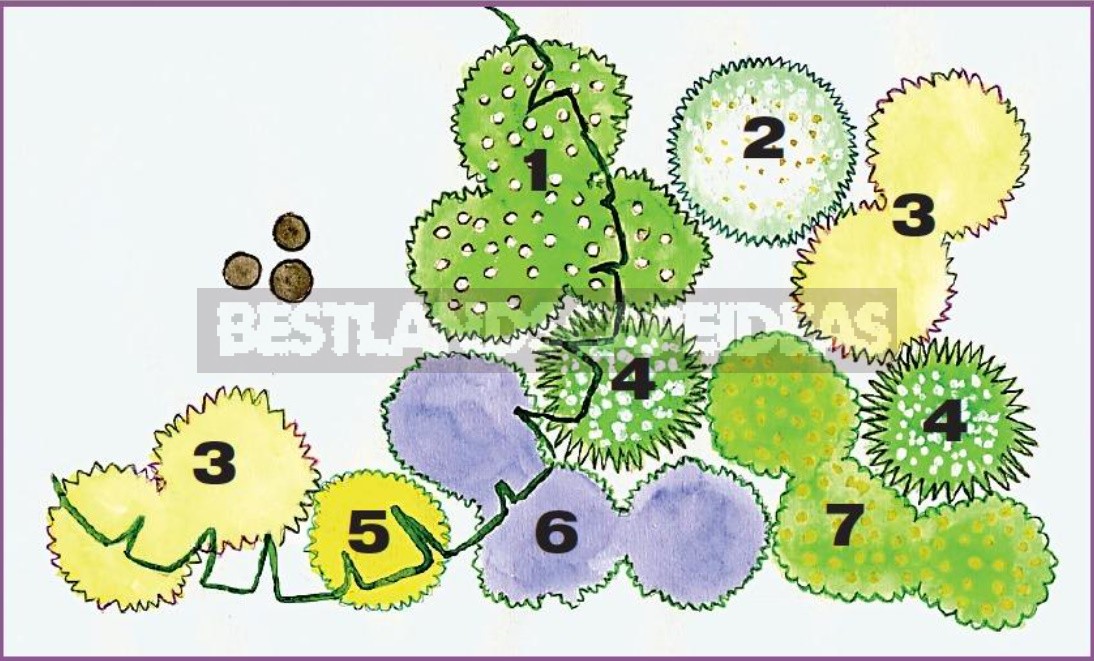