If you are seriously interested in roses and can not deny yourself the pleasure of buying more and more varieties, it means only one thing: you have caught the famous “gardener’s virus”. This “disease” is not treated, I know by myself — but only progresses from year to year. Exacerbation occurs every spring, when seedlings begin to arrive in garden centers. It is impossible to resist, eyes run away from the offered assortment.

Signs of the “gardener’s virus”

Fortunately, the days when we tried to cut roses from a bouquet given for a birthday are over. Today we have a wide selection of varieties from almost all European nurseries: German “Kordes”, “Tantau”, “Skarmana”, French “Guillot”, “Delbara”, “Meijana”, Belgian roses “lens” and “Vissers”, Italian “Barney”, “Petal-de-Roses”, English selections “Harkness”, D. Austin, “Fryer’s”, “Warner”, Danish roses from “Poulsen”, Dutch — from the company interplant. We can buy American varieties of “weeks”, not to mention” Serbian ” roses, which are nothing more than the most popular and popular varieties replicated under license, obtained in other nurseries.

As we get involved in rose farming, everything else in the garden takes a back seat. The rose subdues our garden plans and desires, makes us give up such trivial things as beds and greenhouses, and sacrifice a part of perennial ornamental plants. Rose, we must honestly admit, is able to punch a considerable hole in the family budget, but this can not stop the enthusiastic gardener.

Meanwhile, a novice gardener, carried away by the idea of having a rose garden in his garden, often does not measure his strength with such a difficult task. The entire assortment of roses presented in the garden center is bought indiscriminately. No one pays attention to the group affiliation of a particular variety, whether it is a huge wattled Rambler or tea-hybrid specimens, floribundas or groundcover roses. The guiding star is a picture you like or a flowering plant in a container.

Since the cure for greed has not yet been invented, one should listen to reason in such cases. After all, then all these seedlings will need to be planted, groomed and cherished, to fight diseases and pests, to shelter for the winter, etc. It should be borne in mind that the rose is very selfish, requires increased attention and is able to completely subdue the life of the gardener.

At the same time, I perfectly understand those gardeners who always want something “new”, like to observe and experiment with their favorites (especially in terms of winter hardiness), are happy with each blooming flower and are upset about losses after an unsuccessful wintering. But the loss of some varieties after winter is a great reason to get new ones. After all, we must admit that the garden can not accommodate all the things that we would like to see at home.

The main principle is selectivity

The main principle in the formation of the rosary should be the principle of selectivity. Therefore, no impromptu events! You should carefully prepare for the purchase of seedlings, not succumbing to spontaneous decisions such as”buy, and then you will see”. First you need to draw up a planting plan, think about where you are going to plant roses (in the garden or mixborders, along paths, near Seating area near the wall of the house or porch), then determine the number of planting units; it is advisable to make a list of the varieties, after analyzing their features for. At the same time, you should not strive for a large variety of varieties, this will create unnecessary diversity in the garden. It is better to purchase a sufficient number of instances of one class than the one rose is different.

It is even better if you subordinate your purchases to a specific idea. For example, to collect a collection of roses. Austin or, for example, musk varieties (Hybrid Musk). But how many people know about their existence? Most gardeners usually prefer to plant the usual wattle varieties, floribundas of all colors and shades, tea-hybrid.

But in addition to popular varieties, there is a group of unassuming roses that can decorate gardens, but so far known only to a few lovers and connoisseurs of culture. Only the most advanced managed to plant them in their garden. And these plants, I am sure, all ahead, their charms we all have yet to appreciate.

Musk rose — fine of a stranger

In Europe, musk roses have been known for the second century: from the moment when the German gardener P. Lambert obtained a hybrid of polychrome and Noisette roses, called ‘Trier’. It was this rose that became the ancestor of all roses, later called musk roses, since the species R. moschata was used in the selection process.

Of the pre-war varieties, we have the most famous Lambert variety ‘Mozart’ (1936). at flower exhibitions, it always causes genuine delight of visitors, who take it for a Phlox. It is indeed their caps of white and pink inflorescences (each flower – with a star in the center!) reminds me of this flower.

In Europe, they have long been used in urban gardening. These are absolutely trouble-free winter-hardy plants, blooming with small bouquets of charming flowers of a delicate pastel range. Let them not boast of exquisite flowers, like those of proud tea-hybrid beauties — – abundant flowering compensates for their modest appearance. Use them better as landscape roses, they grow into huge bushes-fountains of elegant hanging lashes. In our garden practice, these roses are still not very popular — I advise you to pay attention to them!

Among musk roses, the wonderful English variety ‘Ballerina’ (1937) is very popular. Flowerbeds and beds planted with these roses, and today everywhere adorn the parks of London and other cities. They bloom in caps of simple small pale pink flowers that open in turn, changing color to pure white. The variety is characterized by an unusual abundance and continuity of flowering.

Nowadays, the Belgian nursery Lens Roses specializes in hybridization of musk roses. Since the 1950s, more than 100 varieties of these roses have been produced here. Meanwhile, in recent decades, this nursery has produced such delicious varieties as ‘Heavenly Pink’ (1997), ‘Dinky’ (2002), ‘Jean Stephenne’ (2006),’ Guirlande d’amour’ (2008).

In my garden, I have already started forming a collection of musk roses. One thing upsets — “the Kingdom is not enough, there is nowhere to roam”. After all, these roses grow in large spreading bushes, and no matter how much you want to add to your collection, you will have to limit your appetites. In the meantime, they continue to please me with their decorative, easy to care for and vitality. Overwinter with a Bang: having flexible pliable lashes, they easily fit into the shelter. Pruning is reduced only to removing faded inflorescences, in response, the rose releases new caps of flowers. In diseases are not noticed, because no wonder they are so loved by European landscape designers. 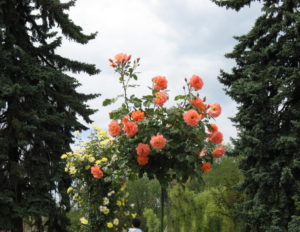 Roses on the Trunk: How to Choose Where to Plant, How to Care 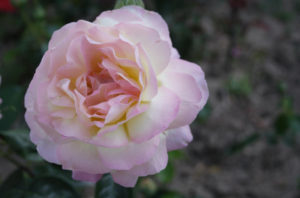 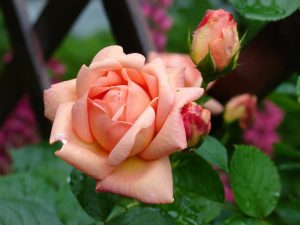 What Does Rose Want? Healthy Food For The Queen Of Flowers (Part 1) 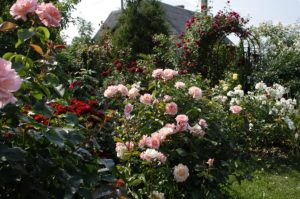 What You Should Know About Climbing Roses: The Recommendations Of The Professional (Part 2)