Leccinum auranticum with a brown cap and dark leg (Leccinum vulpinum) and porcini mushrooms (Boletus edulis), unfortunately, prefer to grow under adult trees, so after transplanting trees with mycorrhizal white fungus, you will have to wait at least 15 years. For their breeding in the garden, it is better to prepare seed material with spores (spores – “seeds” of mushrooms). This is possible only if there are suitable trees in the estate or on the garden plot. For white mushroom-birch, oak or spruce. Leccinum auranticum needs a neighborhood of pines or firs. 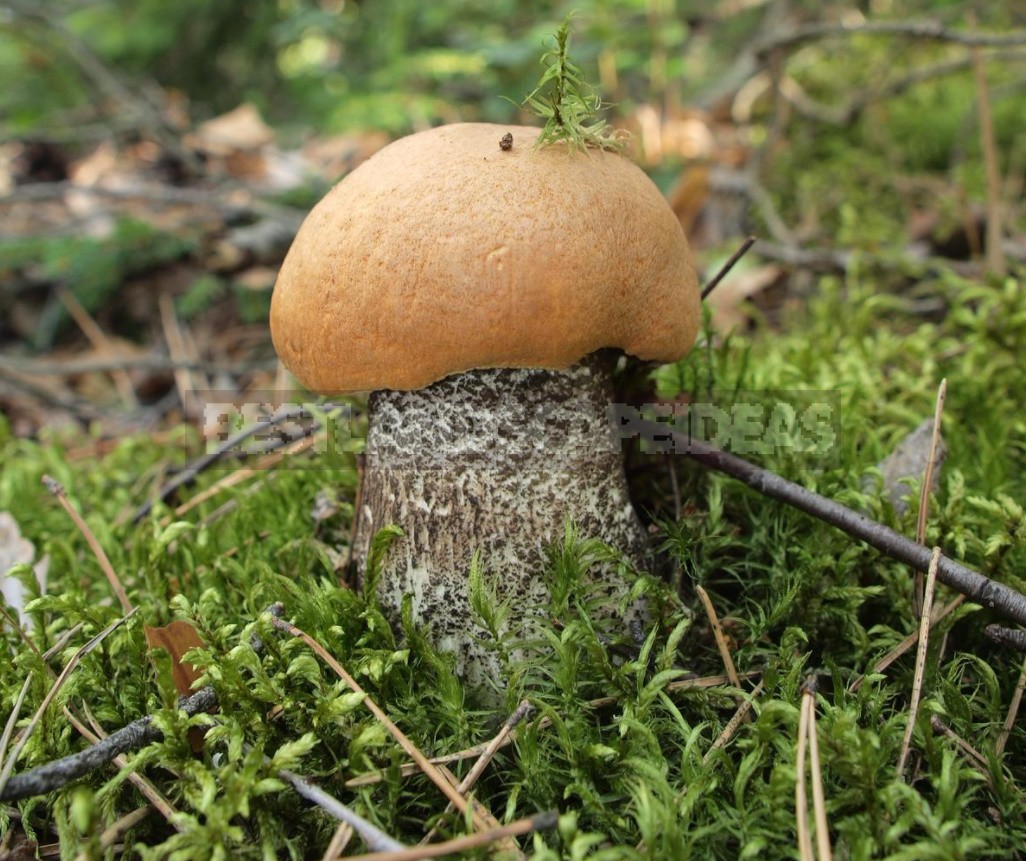 Sowing fungal spores on tree roots is based on the preparation of an aqueous suspension containing many billions of spores. Strong dilution of such a suspension with water before repeated watering of the tree roots makes the creation of a fungal root quite likely. The method was tested in one of the estates.

A concentrated suspension of white mushroom spores was made as follows. We collected several dozen Mature porcini mushrooms, mostly wormy ones. Only mushrooms growing under a birch tree were selected. With a knife, the gimenofor was separated from the legs and fleshy parts of the caps that do not contain spores. We turned the gimenofor of mushrooms through a meat grinder.

Then the resulting mass was diluted with boiled water in a basin. For 1 liter of mass, add 2 liters of water, a teaspoon of ordinary dry Baker’s yeast. The mixture was thoroughly mixed for a long time. They poured the mixture into a jar and let it stand for a week. During this time, heavy spores sank to the bottom, and pieces of mushroom pulp floated to the surface. The presence of yeast accelerates the separation of spores and mushroom pulp. Yeast is also needed for successful spore germination after seeding.

READ  What to do in cases of poisoning by mushrooms

A week later, the surfaced mass and water were drained, leaving a layer of suspension with spores in the glass. The viability of spores after storage for a month was checked by seeding them on filter paper with a nutrient medium. 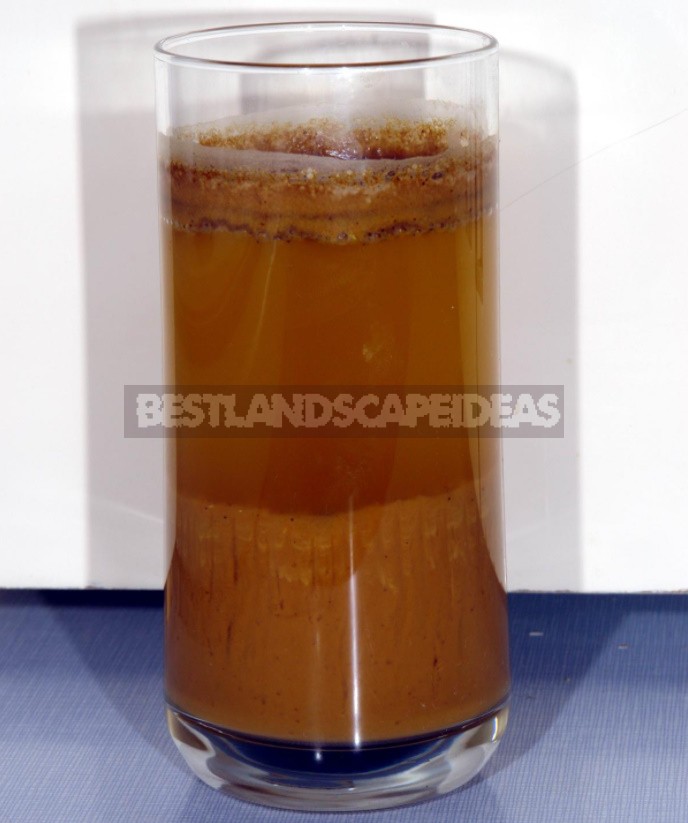 To sow the white mushroom, a tablespoon of spore suspension and a tablespoon of potato starch were added to 10 liters of water. In 2006, this mixture was used once a week to water birch trees that had never seen porcini mushrooms in a radius of up to 3 m from the trunks. Care for the mushrooms planted in the estate was reduced to daily light watering of the trunk circle of trees in the dry and hot period of spring and summer, when the mushrooms are not growing yet. The duration of watering is 10-20 minutes per day. Do not apply mineral fertilizers to the soil, this may have a negative impact on the development of mycelium.

A year later, a white mushroom was found under one of the birches. Two years later, more than a dozen porcini mushrooms were collected. The first porcini mushrooms grew on the dacha plot in 2009. Leccinum vulpinum was sown in the same way. 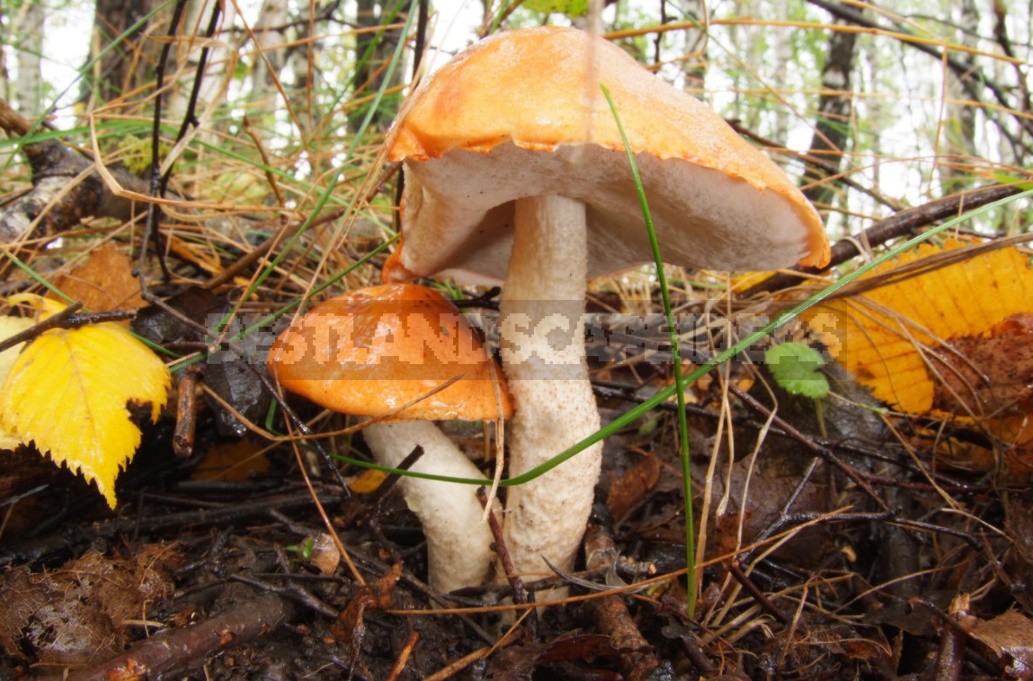 Keep in mind that porcini mushrooms and Leccinum are in a competitive relationship, so it is better to sow their spores in different, isolated areas with birch trees.

Some information about mushrooms

Most often, porcini mushrooms, Leccinum auranticum, Suillus are grown on the site.

Boletus edulis grows with oak, birch, or spruce. The oak form has a slightly whitish light brown cap, the birch form is light brown and the spruce form is brown. 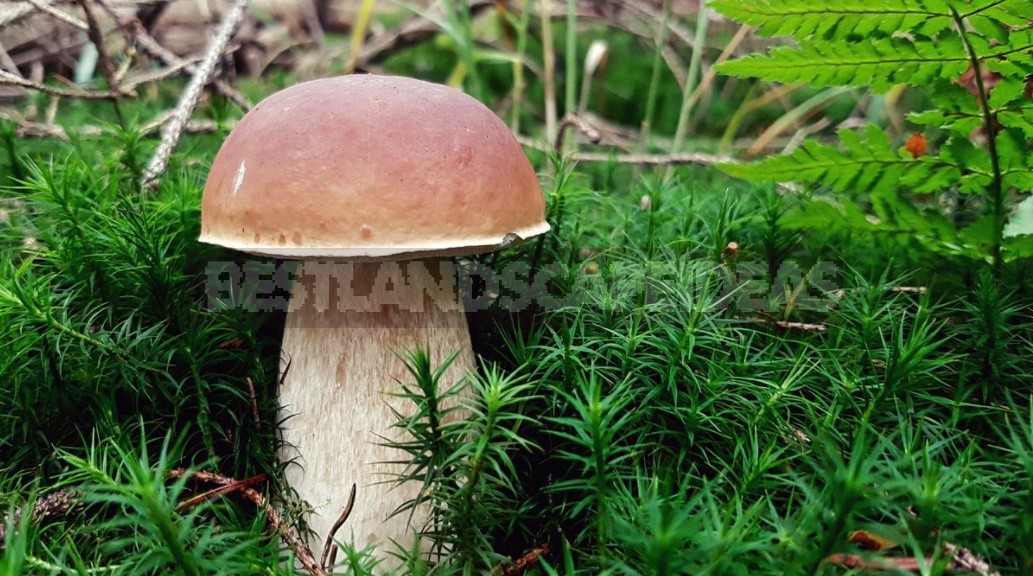 The most delicious and nutritious edible mushroom, which is not necessary to boil. Drain the water after boiling is also not necessary. It is very much loved by forest animals. It makes a very delicious soup with potatoes and butter. Porcini mushrooms can be stored in the freezer. To dry the mushrooms should be cut into small slices and make sure that they do not stick together. Dry the mushrooms slowly, first at a temperature of +50 degrees on the stove, in the oven or in the air stream from the heat gun. At the end of drying, it is necessary to raise the temperature to +60 degrees for 1-2 hours. Dried porcini mushrooms have a special pleasant smell that varies depending on the drying temperature.

Leccinum aurantiacum. This mushroom with red scales on the stem grows in a symbiotic relationship with a wasp on its roots. There is another form that grows under a pine tree — with black scales on the leg. 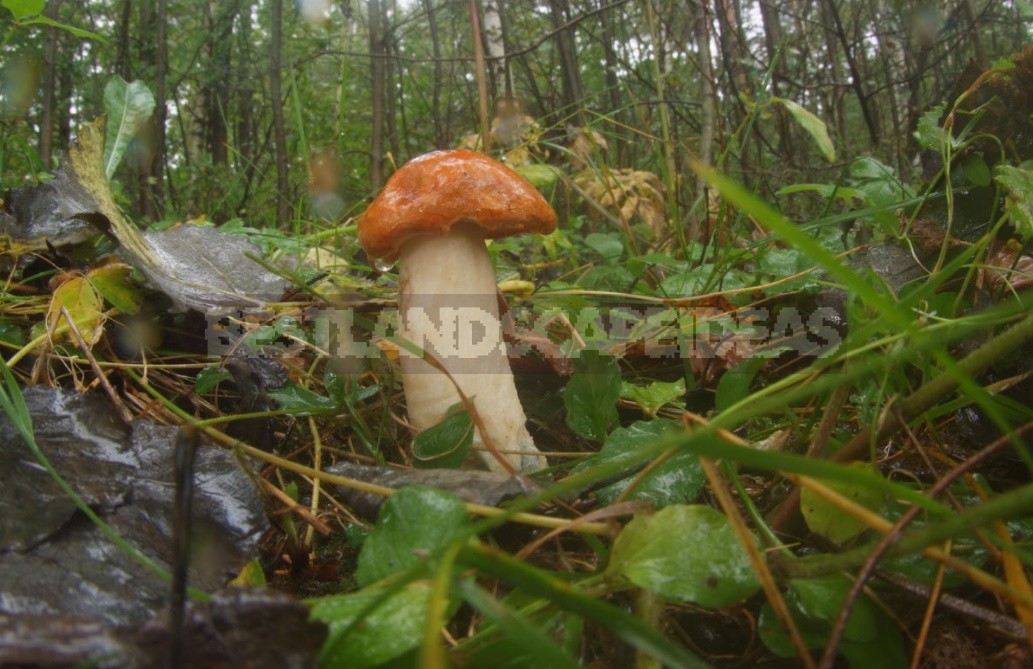 Excellent edible mushroom. It makes a great roast, and it is good in boiled form. Compared to porcini mushrooms, it gives a darker broth in the soup. Can be stored in the freezer. Mushrooms grow quickly and do not worm for a long time. Try to collect only large mushrooms together with the legs, if you do not notice signs of worms.

Lactarius deliciosus. Ginger is a delicious edible mushroom. The milky juice of ginger has no bitterness. The taste is sweet. It can be eaten in salads raw, lightly salted. Pickled redheads are especially good.

Suillus granulatus. Suillus-a tubular mushroom. A tubular layer (hymenophore) of yellow color is attached to the leg, sometimes descending along it. Transparent reddish droplets of milky juice stand out on the tubes. When cooking, the milky juice oiler stains the hands. The dried SAP forms a brown coating on the tubular layer. The flesh of the mushroom on the break does not change color. Suillus granulatus has a mushroom smell and a pleasant, slightly sweet taste. It grows under pine trees. It bears fruit from may to October. In contrast to Suillus luteus, the grainy oiler does not have a ring on the stem. Suillus luteus is less suitable for cultivation in the garden, since it only bears fruit in autumn. 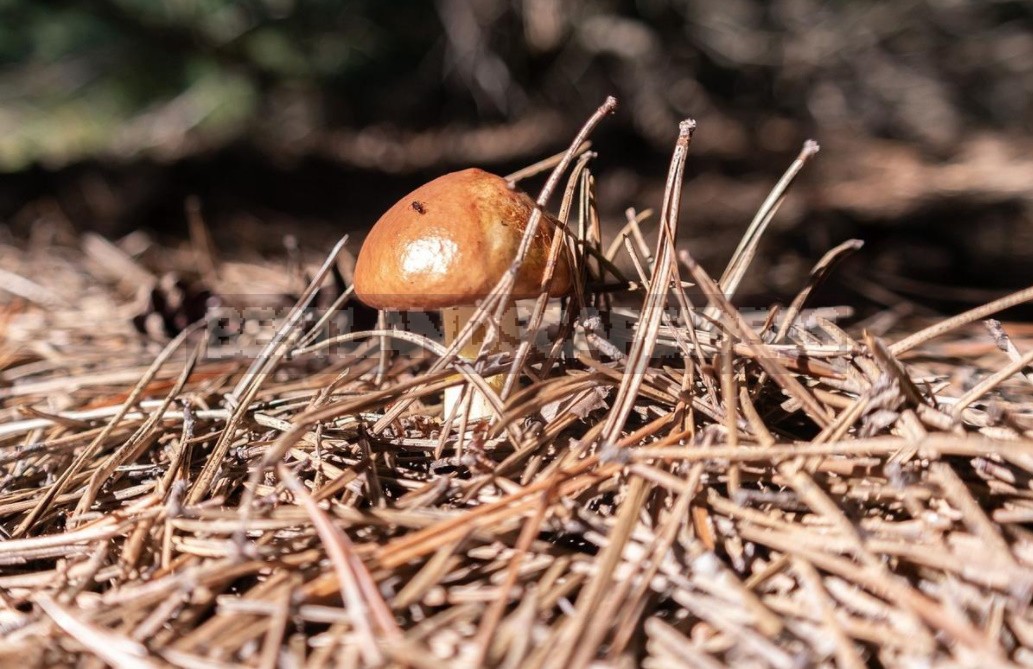 Excellent edible mushroom, which is not necessary to boil, and there is no need to drain the broth. It makes a delicious soup. These mushrooms can be stored in the freezer. Suillus quickly worms. Try to collect small mushrooms before this happens.

The oiler cap is grainy, fleshy and elastic. First a convex conical shape, then a hemispherical shape. The cap of Mature mushrooms is flat or with upturned edges. In the garden, it grows up to 12 cm in diameter, remaining dense and non-aggressive. The color of the cap is light brown or yellow clay. 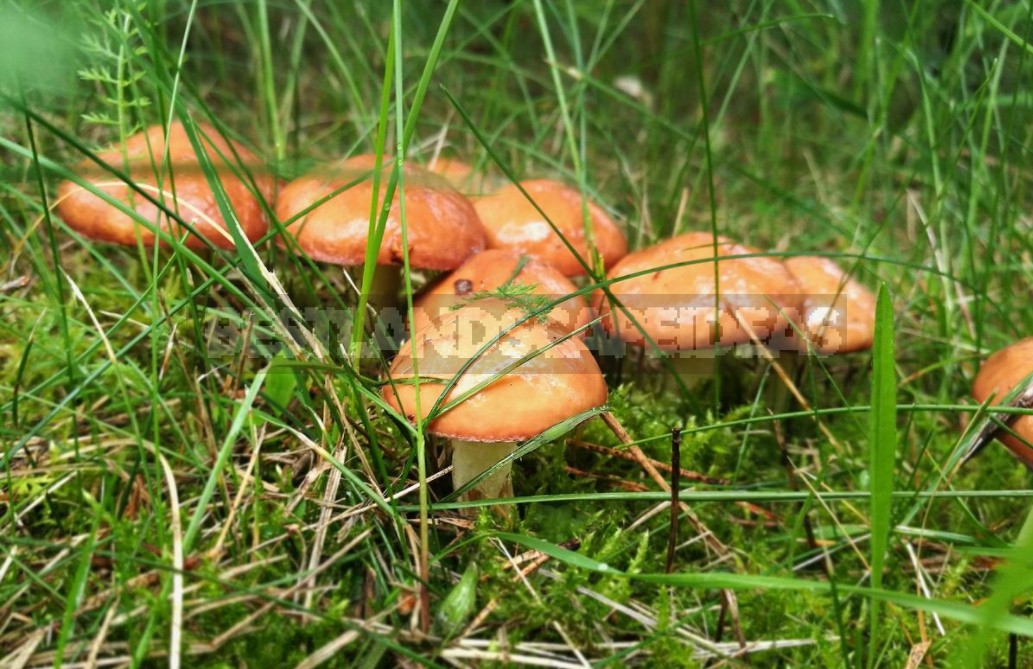 Some mushroom lovers remove the sticky skin from the hats, along with the needles and blades of grass that stick to it. This procedure is important when processing Suillus luteus. Suillus granulatus has a less sticky film on the surface of the cap, so you can simply wash it in water without removing the skin.

Mushrooms on the site-a fascinating business. Good luck to you, mushroom growers!

Dandelion And Burdock Roots Against Skin And Hair Diseases
Fitness Products: Start Preparing For Summer
And The Table, And The House: Feeders, Drinkers And Houses For Birds
Apartment Renovation Expenses: What I Didn't Take Into Account In The Calculations