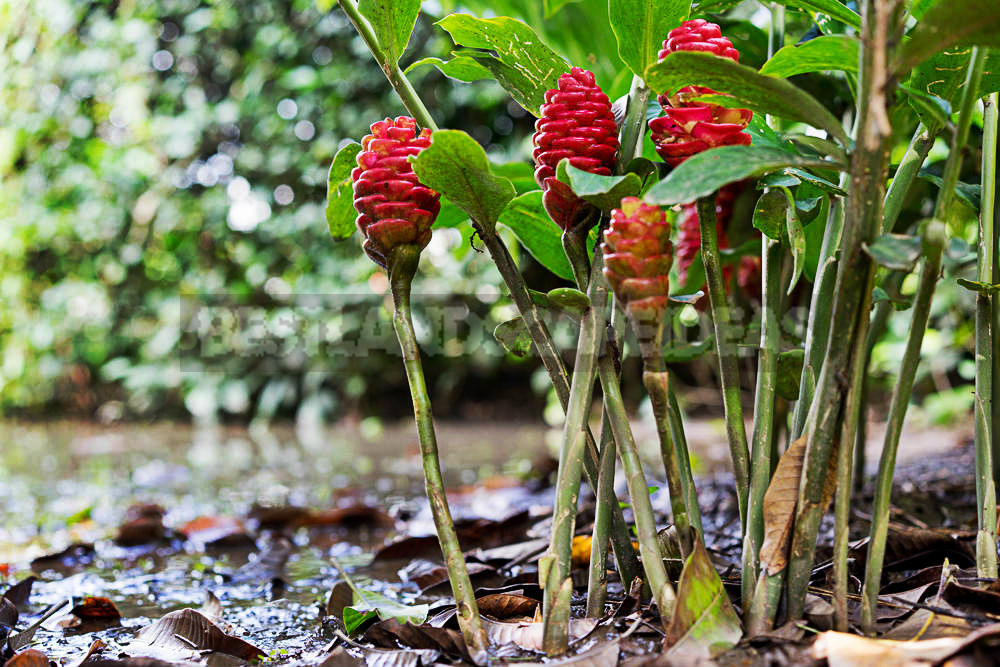 Ginger is a perennial herb and belongs to the ginger family. This family includes about 140 species. Actively grown in India, China, West Africa and Australia, also in the culture of Barbados, Jamaica and Indonesia. At the beginning of the XVI century, introduced to America. 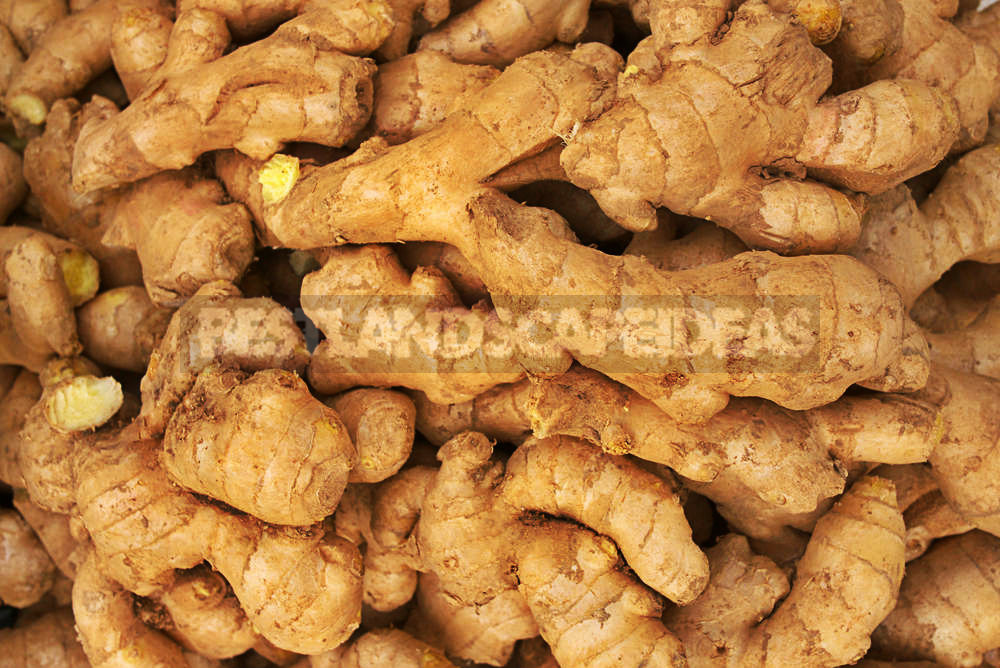 Ginger contains many essential oils in its rhizome and other parts. It is due to this that he has an unusual spicy-sharp aroma and taste.

Ginger has a dense, thick rhizome, covered in several layers with leaves with interstitial adventitious roots located in them. From the most developed rhizomes a pair of ground stalks grow. Ginger stalks are not pubescent, they are long, rounded and upright. The leaves are simple, whole, long, at the ends with a point. 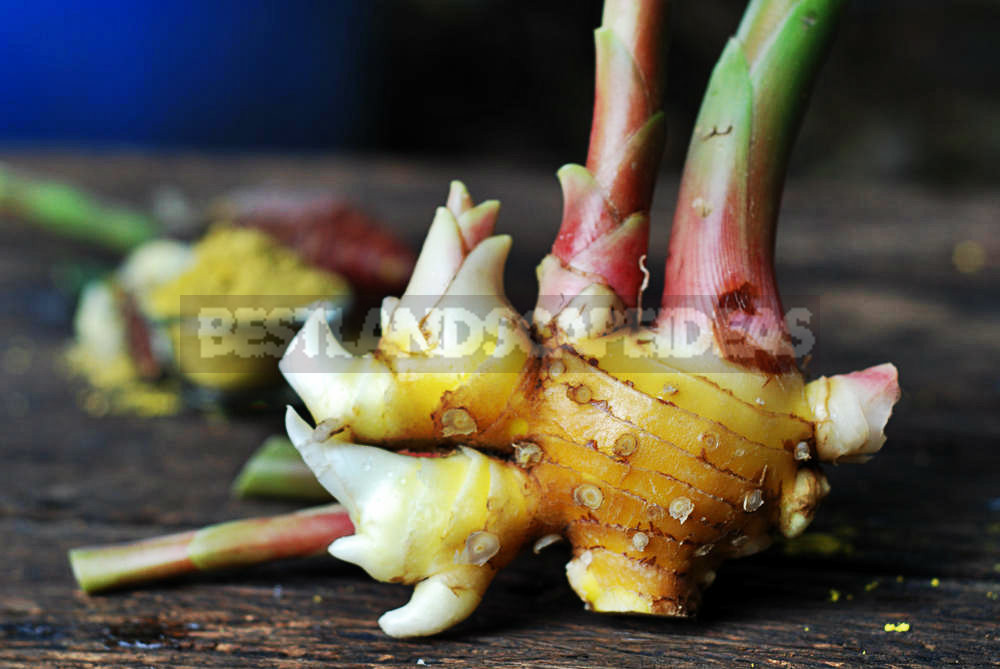 Depending on the cultivated variety, ginger flowers may vary in color. The most common in culture – orange-yellow and brown colors of the inflorescences, but there are also red. The flowers are collected in the ears at the top of the shoots, in the axils of the leaves. The height of ginger can reach 2 m. Externally, the plant is somewhat similar to our dear cane, but the stems have many scales. 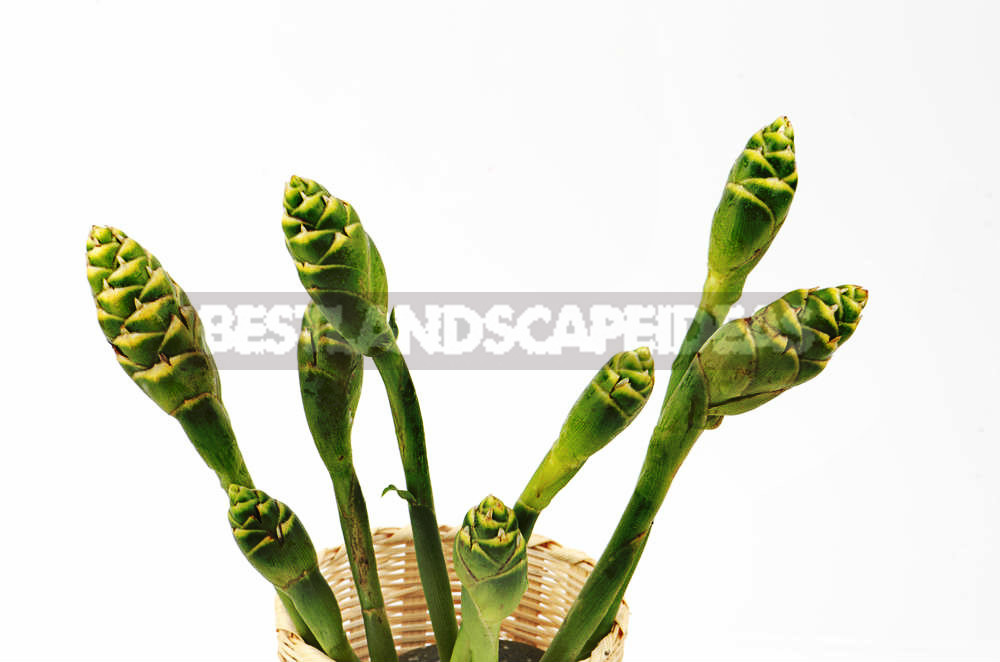 The most well-known species in culture is Zingiber officinale. About him and talk in this article. It is its rhizome that we use in everyday life as a spice, as well as a healing agent.

Keep in mind that ginger is a heat-loving southerner. Ginger root ripens in the ground for about 10 months, so it is believed that in the middle lane it is impossible to grow it in the garden. For cultivation in the ground need a winter garden or heated greenhouse. Of course, ginger is easily cultivated at home in a pot, but this article is for those who want to get a fragrant and healthy guest in their garden.

When planting ginger, it is worth considering that this tropical exotic plant does not tolerate drafts, excessive moisture and moisture (the rhizome begins to rot), the wind and the scorching direct sun will also negatively affect the yield. In addition, ginger is very bad for a transplant, it is recommended to do it in the spring, as well as plant. Moreover, the soil mixture needs to be updated, and the root is divided. 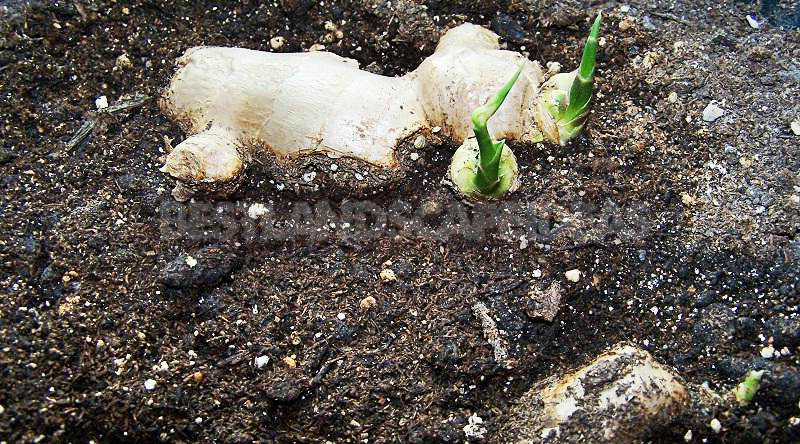 We decided on the site: bright, sunny but without direct sunlight, warm, protected from winds and heavy rains. The soil should be light, but very fertile. Its acidity may be slightly increased or normal. Take the turf ground, humus and sand in a ratio of 1: 1: 0.5. Either the site for planting is well dig and charge with organic and mineral fertilizers, break with sand if the soil is heavy. Of organic fertilizers, rotted manure is best, fresh can not be added.

Cultivated ginger breeds only vegetatively – by dividing the rhizome into nodules in the spring before planting. The root for planting should have eyes, from which then shoots will appear. It is cut into pieces so that each has a pair of growth points. Sections need to sprinkle with crushed coal from hardwood trees. 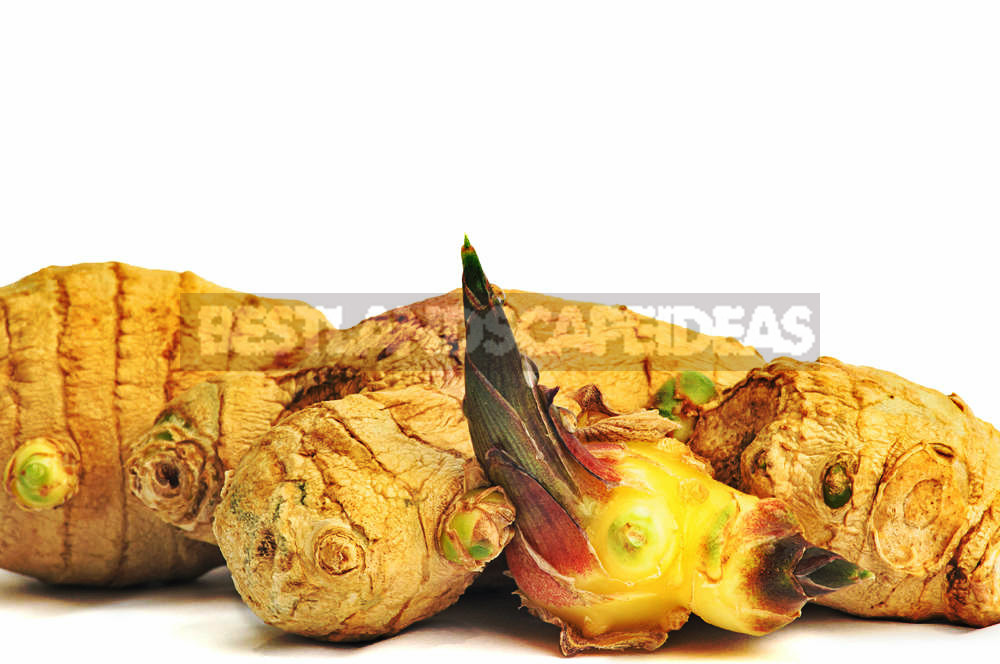 Keep in mind that such a germinated root will not be able to be planted immediately in open ground, it must be planted in a warm greenhouse in late March – early April. For normal growing season, create a ginger temperature of + 25 ° C, spray the soil with a little water. Do not allow the temperature to drop below + 18 ° C, otherwise ginger will “fall asleep” and it will be rather difficult to resume its growth.

In harsh climatic conditions, the roots are dug out at the end of August. At this stage, the harvest may not please you, so many are transplanting ginger in tubs or large pots and grow in the heat of the house almost until spring. Somewhere in February, such a transplanted ginger will shed its leaves and will remain dormant. At the same time it is necessary to maintain the temperature no more than +16 ° С.

Weed the weeds and gently loosen the soil. For the winter, you can dig up and dry the rhizomes, and you can try to transplant into a pot and continue to grow at a temperature of +18 … +20 ° C at home.

In the spring, as soon as you notice that ginger begins to grow, once a month feed it with urea, a dry mullein. But by the end of August feeding should be stopped. 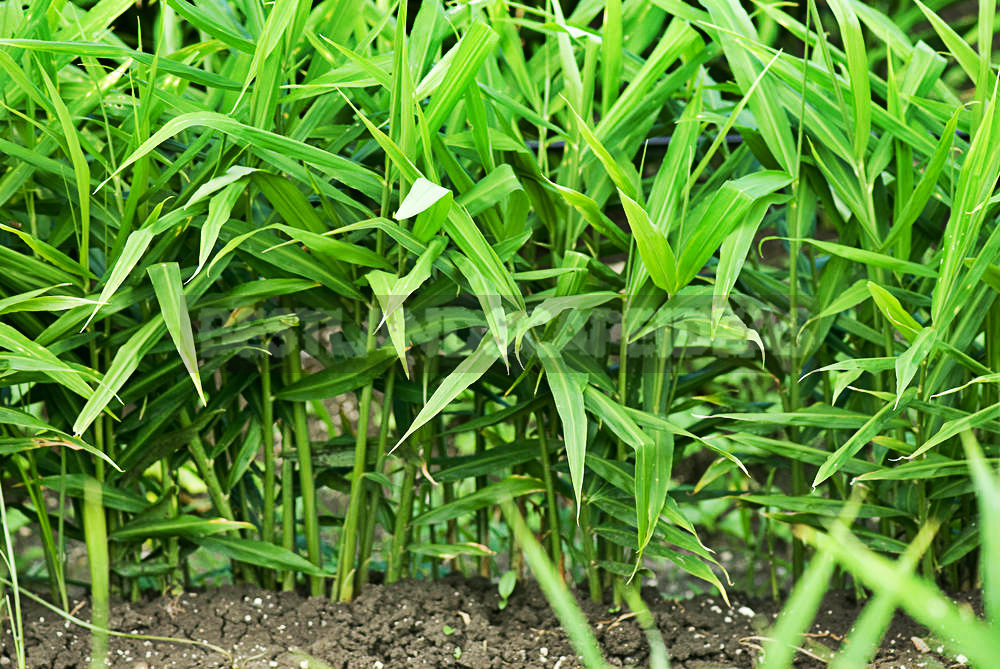 Ginger does not like excessive moisture, but the drying of the soil can not be allowed. It should always be slightly wet, crumbly.

In southern countries, where it is warm all year round, fully matured ginger is harvested when its leaves begin to turn yellow, fade and dry. At the same time the rhizome absorbed a lot of strength and resounded. The taste of this ginger is burning, full-bodied. But you can dig up and young rhizomes with a more delicate flavor. For example, in Thailand, ginger is harvested from November to March. In our realities, we have to dig up the rhizome at a time when, due to weather conditions, it can no longer grow. 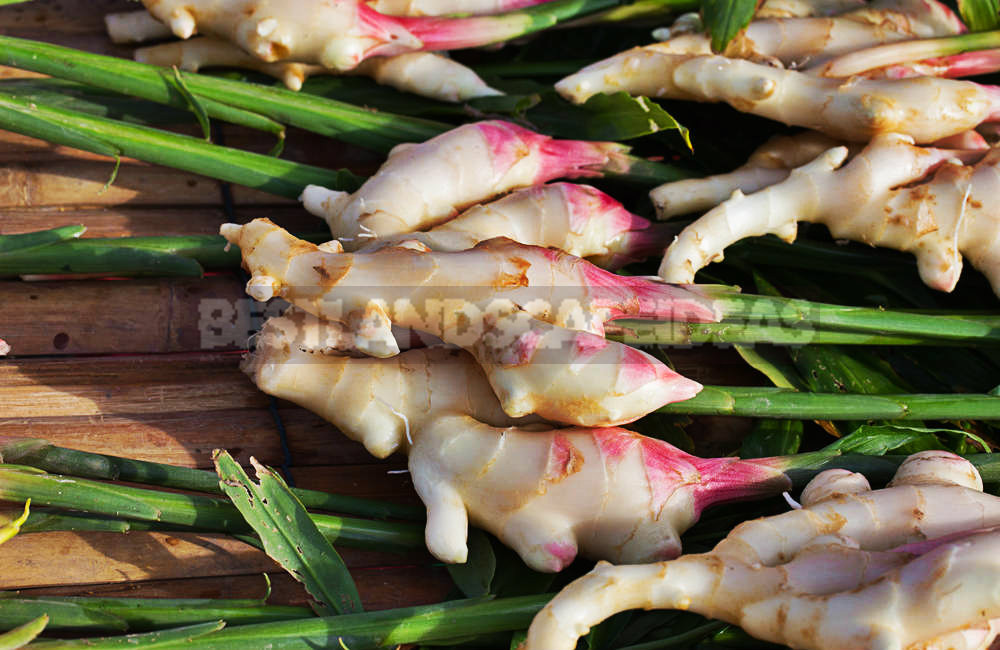 In the food are also used young seedlings of ginger, like a pencil. To taste, they resemble a tangerine with an acuteness.

What a Gardener Should Know About Soil Conditions
Nine Healing Recipes With Ginger: the Cold Will Not Come
Seedlings in February: What Time to Sow?
What Features of Lawn Mower Will Make Life Easier