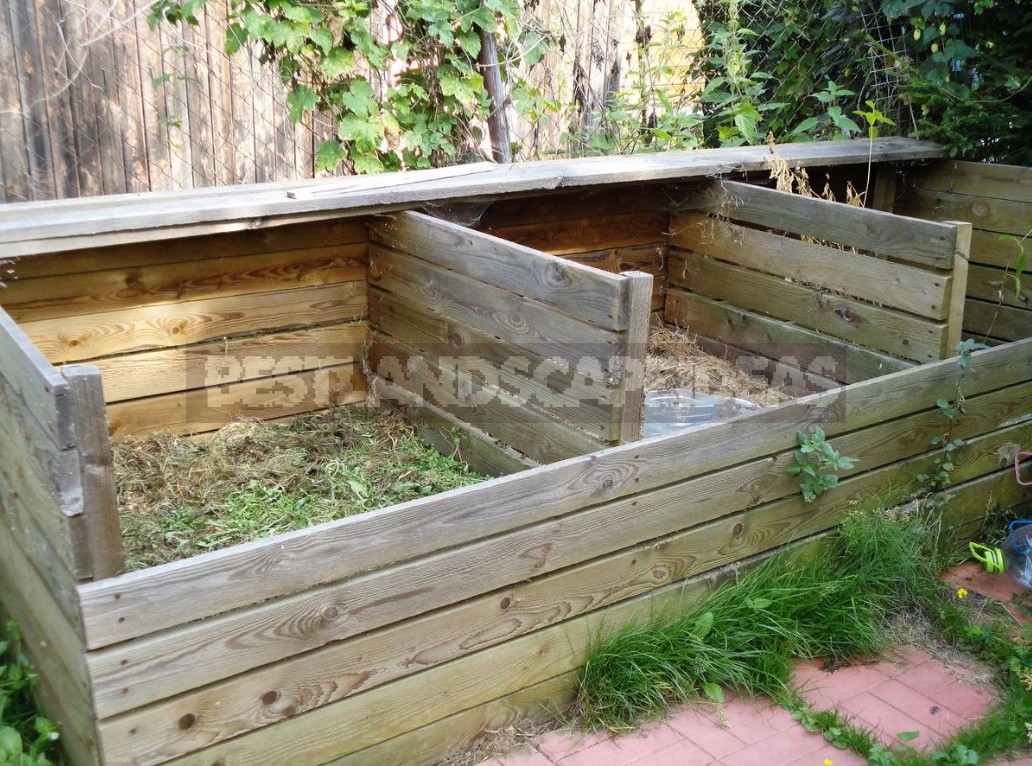 Compost box-the most important, I am not afraid of this word, the construction, the role of which in the garden is difficult to overestimate. Without it, you simply will not be able to establish a full-fledged suburban existence. It is unthinkable without the ability to properly dispose of garden and household waste. Therefore, in each, literally in each garden, it is necessary to arrange a place designed for this purpose.

Life itself forces us to do this, although, admittedly, many treat the idea of a compost box with great prejudice and disgust. And all because it is often considered as a branch and an analogue of almost the city garbage. Often there is such a picture: in a secluded corner of the garden is built from scrap scrap materials, sheets of broken slate, some unnecessary boards and remnants of bricks incomprehensible “pen”, where everything is demolished that goes to the release. 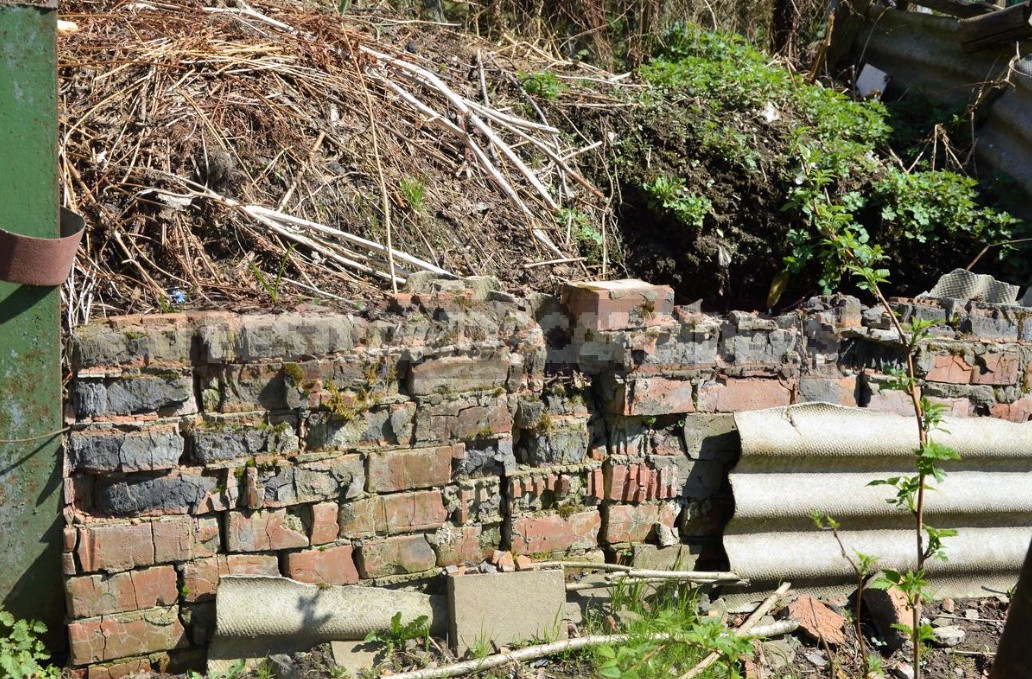 After a while, several buckets of rotted substrate are taken out, and new portions of grass and kitchen slops are hammered into the formed pits. And so it repeats again and again. Not only does such a structure, if I may say so, look unsightly — it is impossible to produce a sufficient amount of compost in it. But as such gardeners are wrong, depriving themselves of the opportunity to receive the most valuable organic fertilizer for free and in the required amount! 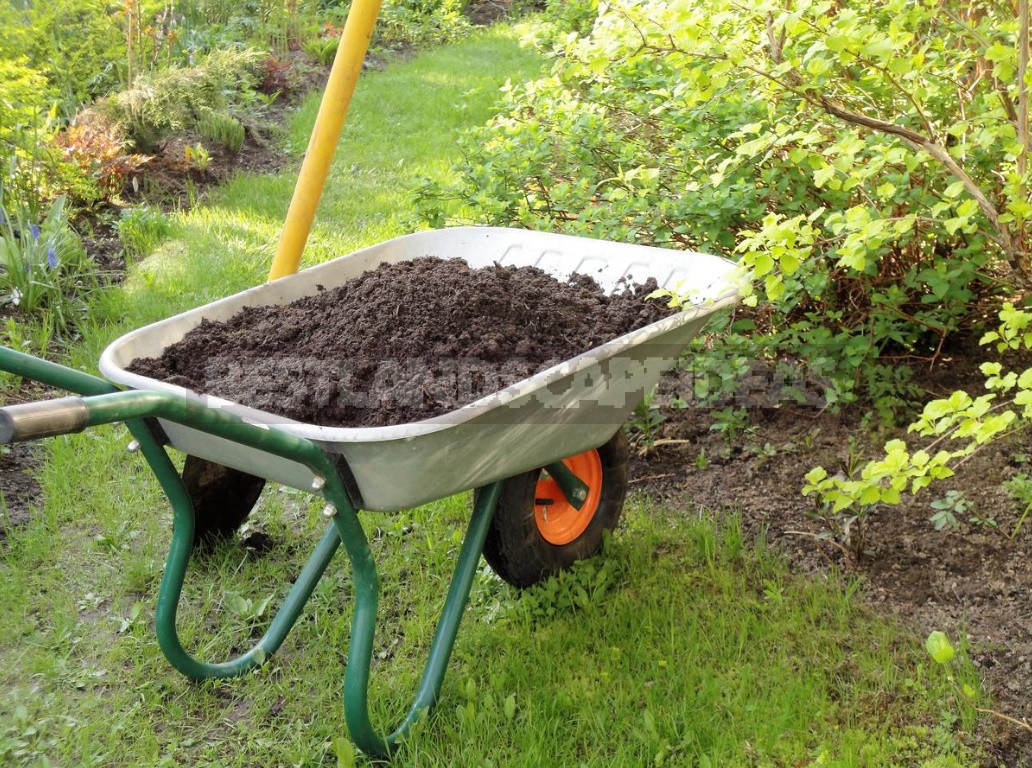 Instead, it would be good to build a capital compost box according to all the rules, which is beneficial in that it not only allows you to process all kinds of waste (weeds, lawn grass, faded plants, kitchen slops, etc.), but also in a continuous cycle to obtain from all this the most valuable organic fertilizer called compost. And such a structure will serve not 1 year.

What conditions must be met? First, the choice of location is important. Compost box, no matter how aesthetically pleasing it may look, of course, should not be built near the house or other living space, at the entrance to the site or near the entrance gate, etc. Although I have seen this. Owners on my puzzled question, than it is caused, answered: “that the place did not disappear”. Have such a box by all the rules should be in a fairly secluded place, somewhere in the far corner of the garden, in partial shade, and not in the sun-ripening compost should not dry out. 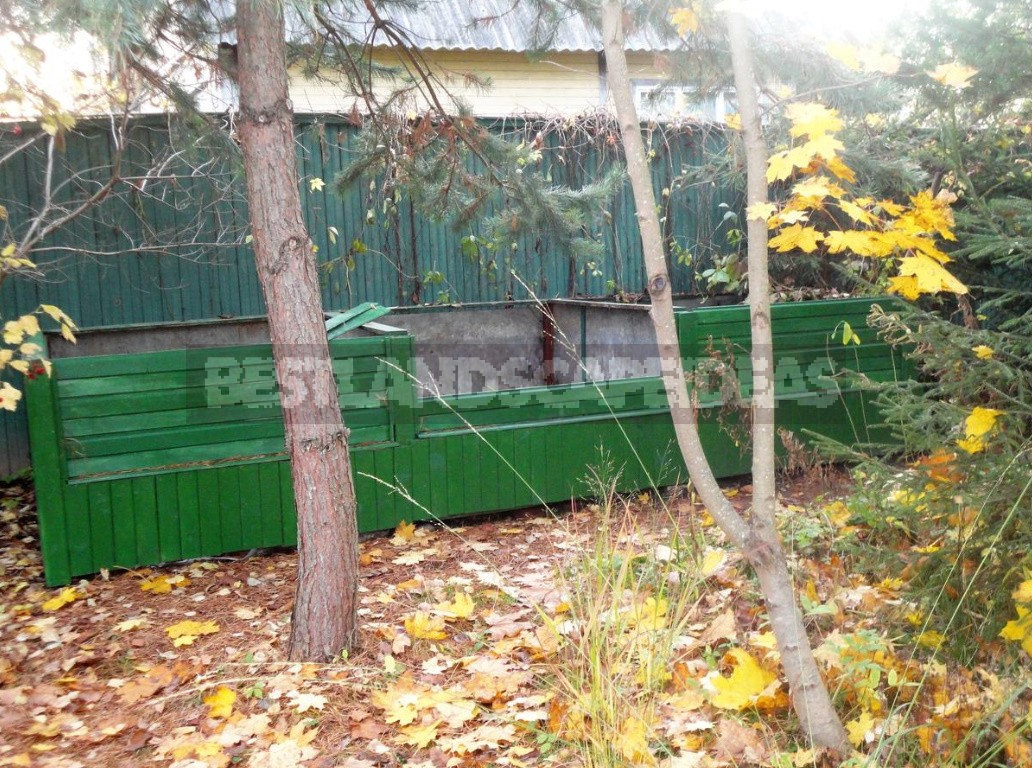 It is necessary to equip convenient approaches to it, it is better to lay a well-equipped stationary path, because you will visit there regularly-then with a pile of weeds, then with a bucket of kitchen waste. And before a box it is necessary to pave a platform with a tile or bricks that it was possible to approach with a wheelbarrow when the hour comes to choose ready “production”.

You need to build a box of new strong, thick enough boards. 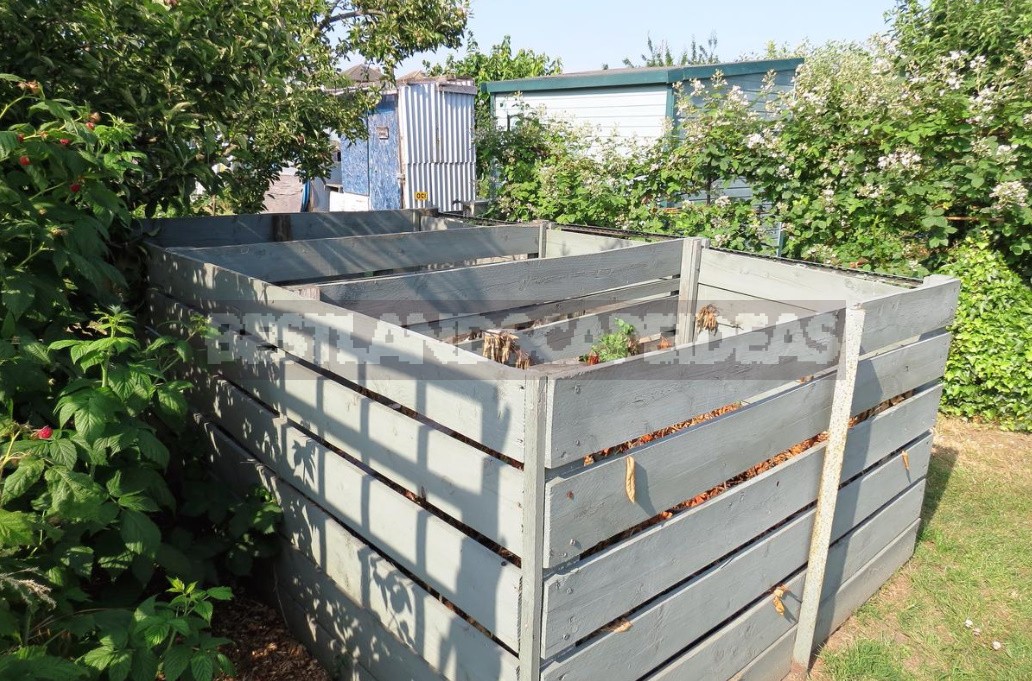 Compost is prepared with waste-recycling bacteria, and it’s a pretty aggressive environment for any organic. Microorganisms do not care what to eat-weeds, watermelon rinds, other waste from the table or “gnaw” and decompose the boards from which the box is built. Therefore, they must be reliable, necessarily impregnated with compounds from rotting or pre-carefully painted, especially their end sides.

This is due to the fact that the boards are not put back to back, between them are left a gap of several centimeters wide. This is done because the compost must receive enough air throughout the height of the structure – this is a prerequisite. Aeration can significantly accelerate the processes of organic metamorphosis occurring during the maturation of compost. 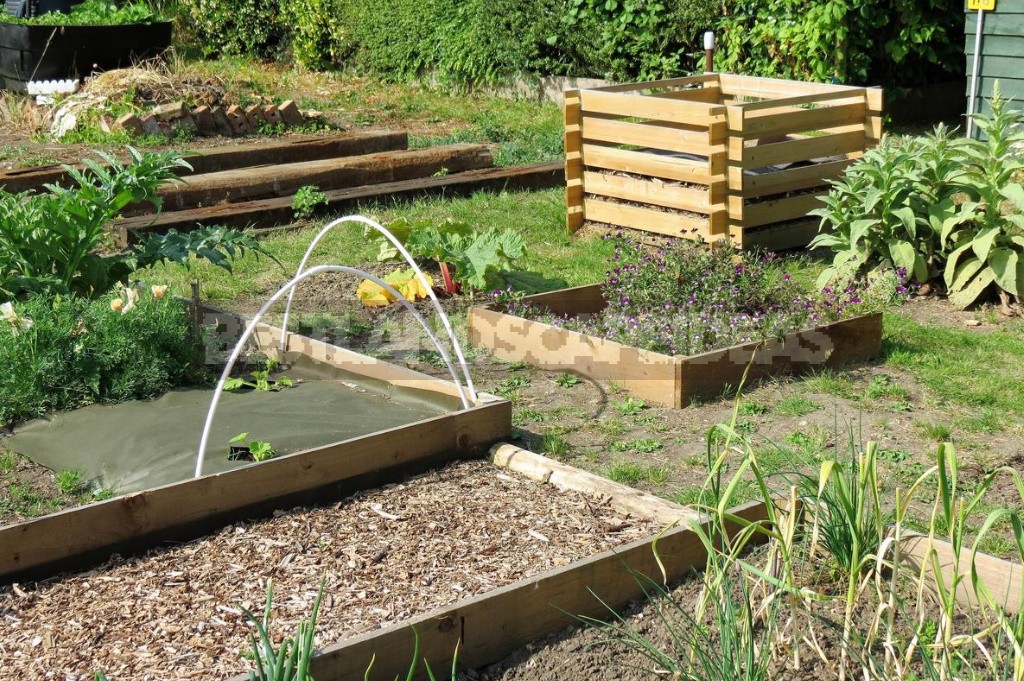 A cheaper and more durable option is obtained from sheet slate, which does not rot. It makes the rear, side walls and partitions. Slate in several places should be strengthened with boards, so that it does not burst from bursting when the box is filled to the limit. 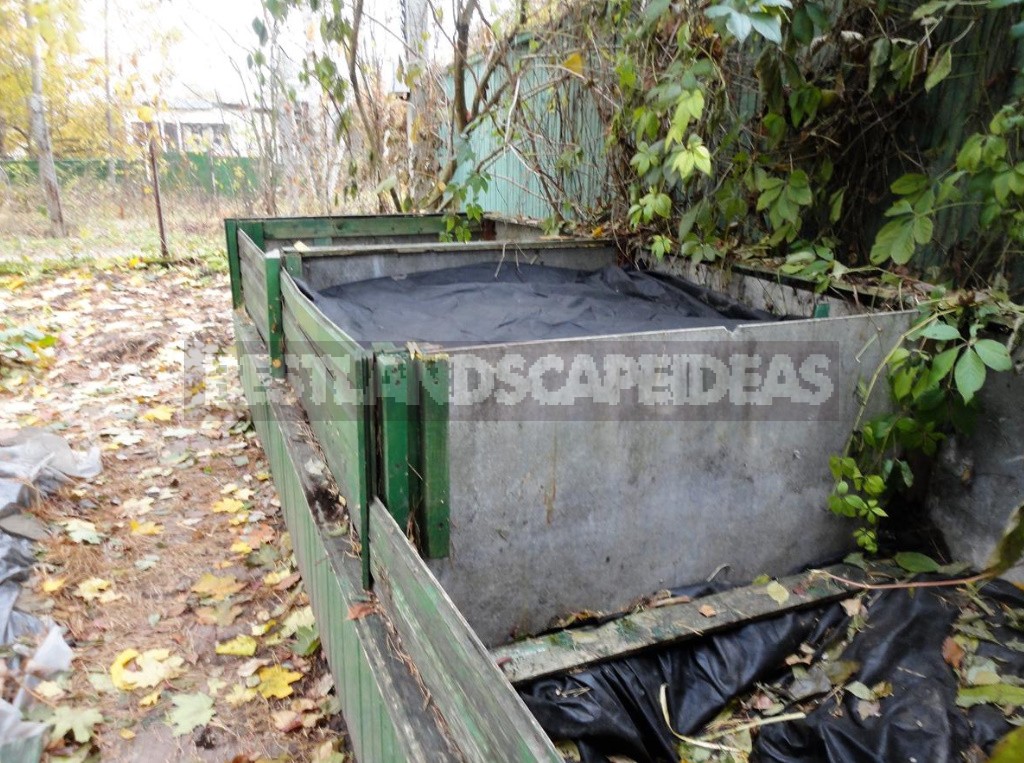 The front wall is still more convenient to build entirely of boards, especially since it must be made in such a way that the compost was easy to choose from the box. Half the way up and make it stationary, and then stacked several rows horizontally (not vertically!) instead of boards. They are inserted into special grooves so that they can be removed to the desired level. This is very convenient for the user during the excavation of the finished product. 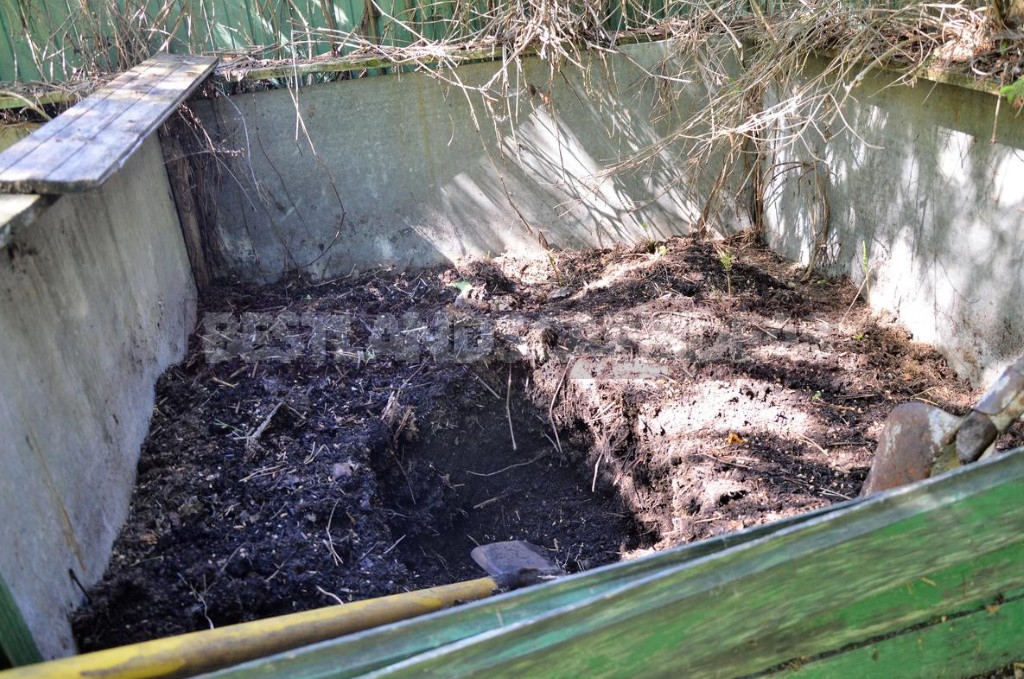 A box of slate is obtained without cracks, but the aeration is not affected by the wide and spacious compartments of 1,5×1,5 m-this is the standard size of slate sheets. If you think such dimensions are too bulky, then this material can easily be cut into smaller fragments. 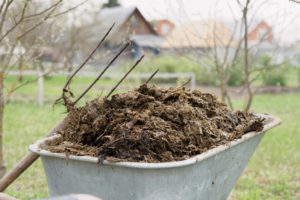 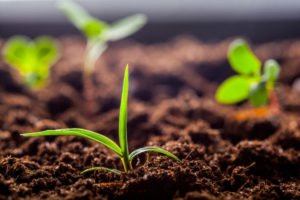 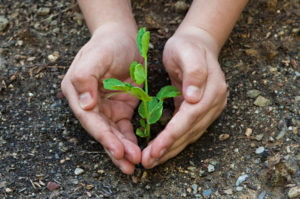 How to Grow Champions?