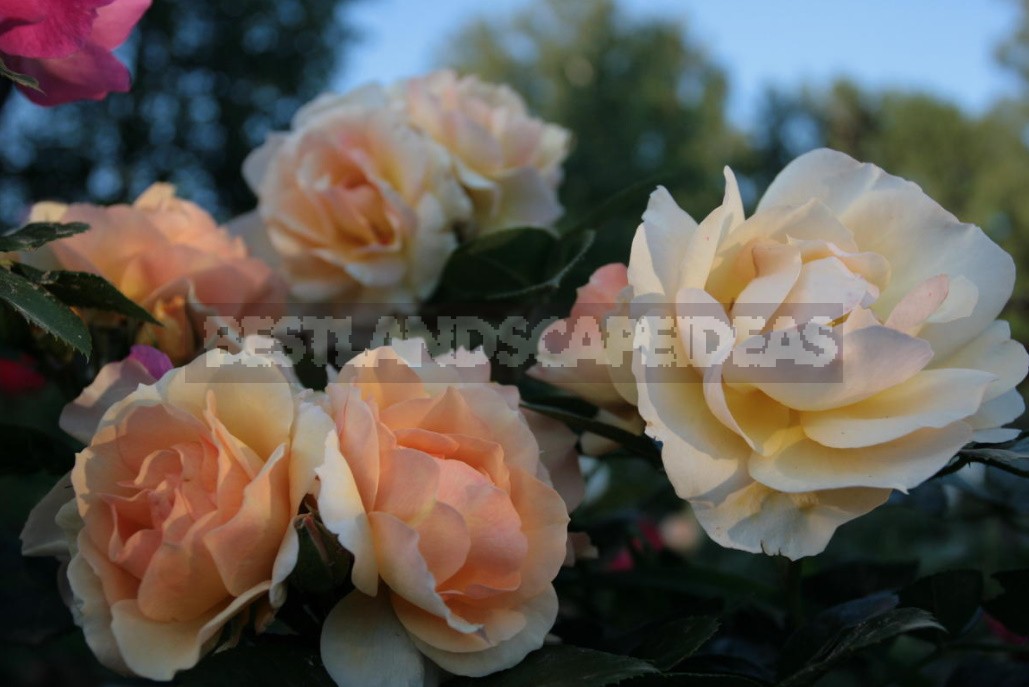 It’s autumn again, and rose lovers are sad again. The amount of work to be done is depressing. It is good for the rose lover who lives in the South, under the ever-smiling sky, where winter is not met as an unpleasant and often destructive guest. But it is impossible for anyone who wants to live in these blessed countries, and therefore we have to preserve roses in our climate in winter, using artificial protection. In the old days, roses could not be refused, and we will not refuse.

Sometimes it is possible to have a warm and long autumn, when the roses continue to bloom. Do not interfere with flowering, but growing young shoots at the beginning of the month can still be pinched (remove the growth point). This remark is primarily concerned with climbing roses from the Rambler group and some powerful scars. This simple technique contributes to the maturation of shoots.

Fertilizers are not applied in October, but if you missed the September phosphorus-potassium fertilization, then at the beginning of warm October, you can still “powder” the ground in the rose garden with sifted wood ash at a rate of 2 cups per square meter.

Autumn, despite all the fears of gardeners, is the most favorable period for planting roses. The freshly dug seedling is characterized by the highest quality. For reliable rooting of seedlings, it takes only 10-12 days. Root system cells grow and divide faster compared to the aboveground part. Experts believe that active roots of autumn origin are more stable than spring ones, longer-lasting and richer in nutrients.

Do not be alarmed if there are morning frosts – the soil does not cool down so quickly. The temperature optimums for root growth are slightly lower than for shoots, and in some species of roses, root growth processes continue even at a soil temperature of +4…+2°C. The average date of occurrence of stable negative temperatures falls on November 5-11.

There are nurseries that offer their own planting material in the fall. For example, our nursery breeds the most stable varieties under licenses of European companies. Our long-term observations show that even in difficult winters in rose gardens, roses winter better on the youngest autumn plantings. Winter shelter for new plantings is not difficult. For a beginner, this first experience will even be useful, and the technique of hiding in the future will not cause difficulties.

In autumn, freshly dug roses with open roots are planted. Greenhouse roses from containers during late planting do not have time to adapt to the changed environmental conditions. If you ordered seedlings for autumn delivery from Europe, you probably won’t have time to plant them in the fall. They dig up roses in late October and November. They will have to be dug up and planted in the spring.

October is the best time to transplant roses. All that is planted wrong, collect in new compositions. Dig out relatively young roses, wash and cut off old and rotten roots, slightly shorten the stems, cut off the leaves and plant. Old roses are transplanted with a lump of earth around the roots.

With the hope of rejuvenation

In some rose gardens, roses are gradually formed that do not give new shoots of replacement. Most often, old Park roses are brought to this state, and sometimes tea-hybrid ones. Regarding Park roses, there is a belief that they are “almost not cut”. Of course, each garden group has its own specifics in pruning, many of them bloom well on old branches, but this does not mean that roses do not need pruning. The saddest thing is that sometimes tea-hybrid roses, as I am told, “bloom on one stick”for several years. Such an incident happens when they plant weakened seedlings or “it’s a pity to cut them off”. 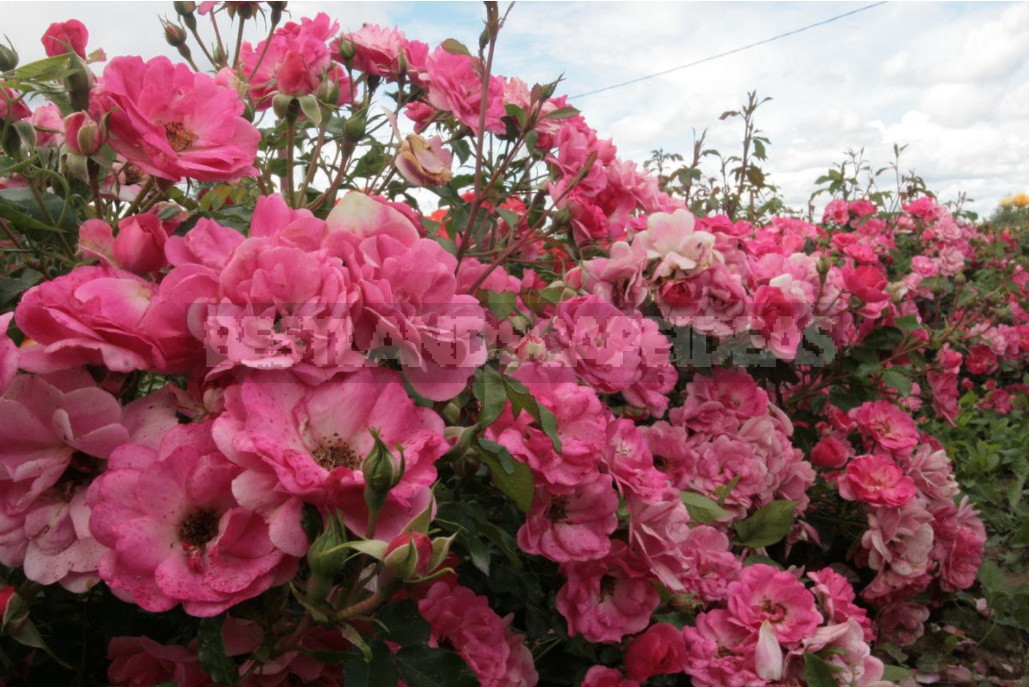 Try to rejuvenate your roses: in mid-October, cut them short and immediately hoe them with a mixture of loam and rotted manure. In the spring, clean up the autumn sections, feed them, but do not remove the Spud, at least until the beginning of summer.

In October, roses, with rare exceptions, are not yet covered, but it’s time to prepare. With the completion of shelter operations, there is no need to rush, the first frosts are even useful for the aging of wood, leaf fall and General hardening of plants. While preparing the covering material, structural elements of shelters, land for hilling. Is Spud necessary in all cases? Sometimes it saves roses, and sometimes it causes the root neck to bulge out. In any case, avoid peat for this purpose, especially in conditions of regular spring flooding. 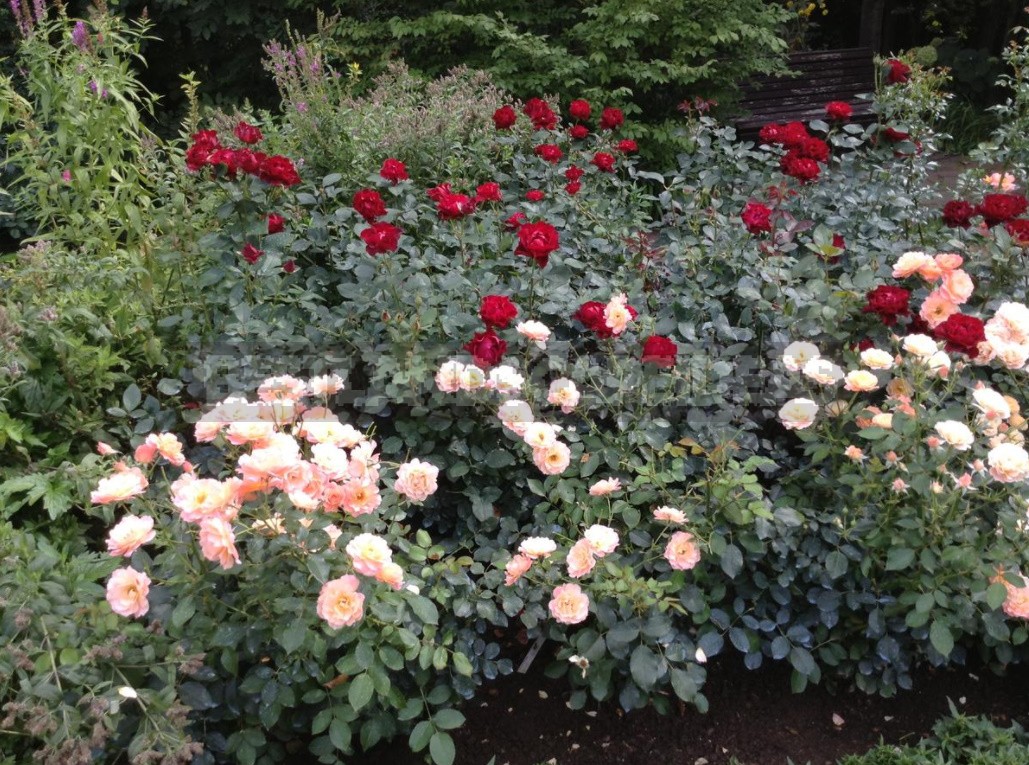 In the second half of October, you can gradually cut the leaves, starting from the lower tiers. For owners of large rose gardens, this is hell. With some roses with abundant small foliage, it is almost impossible to cut all the leaves. But this is only a technically difficult problem. It is worse if the leaves have already been removed by fungal diseases in the middle of summer.

Pay attention to these roses. The buds that were laid for the vegetation of the next season are spent. You will have to do a short pruning, but not all roses can stand it. If the roses are healthy in late autumn, and the foliage is plentiful, then you can not cut it. In the spring, just sweep it with a broom or brush and burn it. 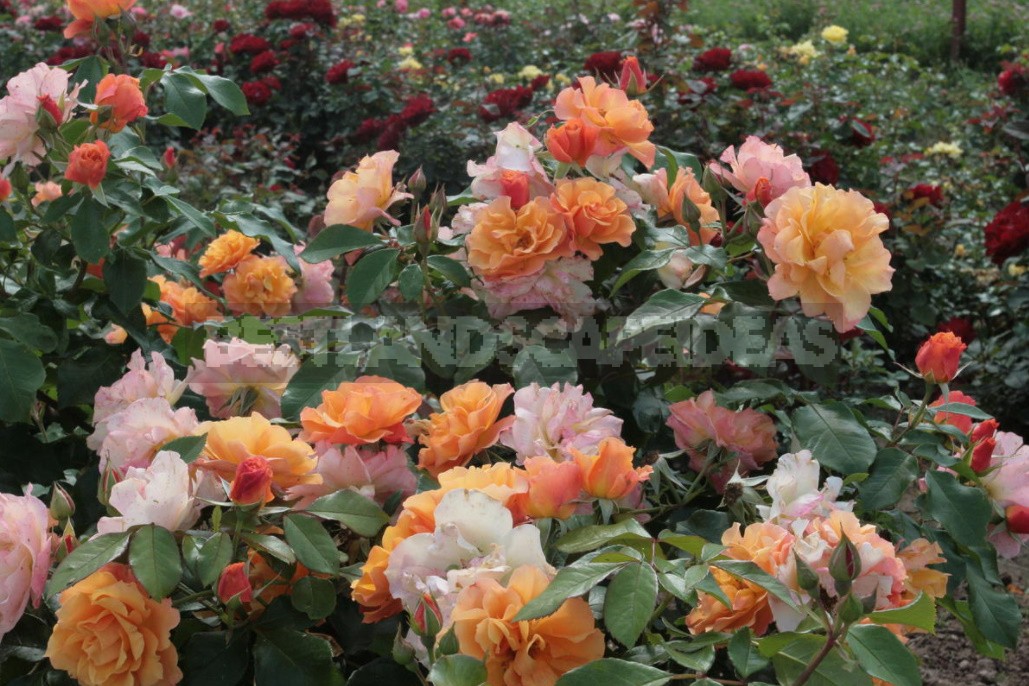 In mid-October, they begin gradually, in several steps, to bend the climbing and stem roses. If the stems are old, they will have to be dug from the side opposite to the slope. When buying stamp roses, I advise you to contact only large and reliable companies that use special stamp rootstocks, they are more plastic and durable. With a random and inexpensive purchase, unpleasant consequences may soon be discovered – the fragility (dryness) of the stem and numerous shoots of the rootstock with a weakened crown.

Frost and winter hardiness — what is the difference?

We often confuse winter hardiness with frost resistance, and this is not the same thing. 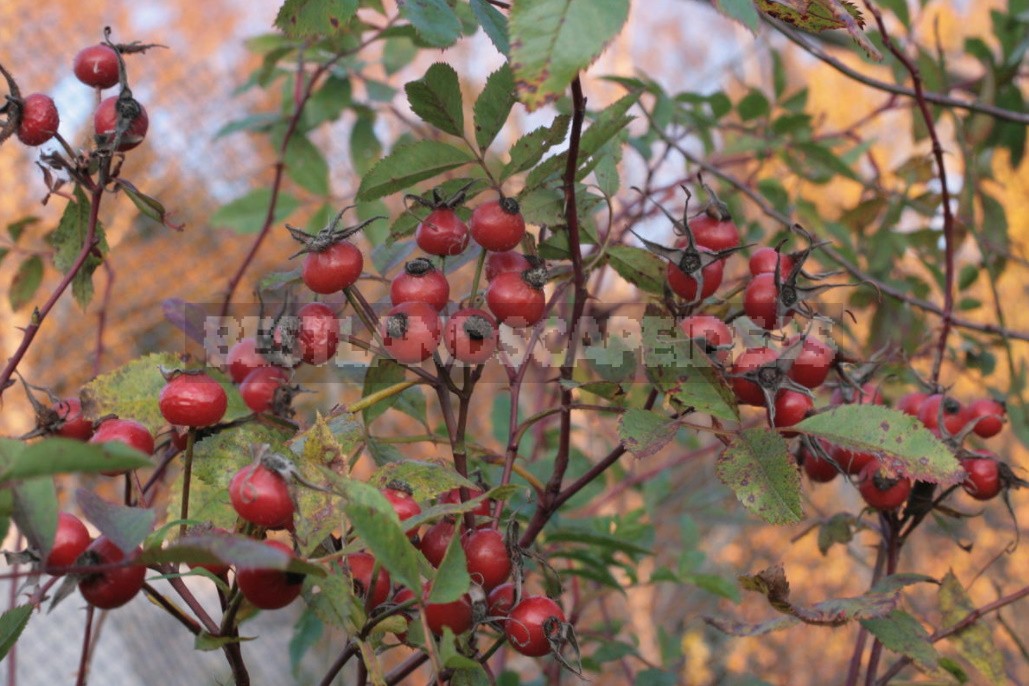 Frost resistance is the ability, determined by the hereditary basis of a given plant species, to tolerate temperatures below 0°C. Frost resistance is not a permanent property of plants, it is formed during ontogenesis under the influence of certain environmental conditions. The decrease in growth rates, the transition of the plant to a dormant state, its depth and duration in the same conditions for different varieties are not the same. In the end, the problem of adaptation again comes out in the first place – the correspondence of the genotype of the variety and the environment. The simplest conclusion is that not every variety that is delivered here can even theoretically overwinter. And they carry everything they have.

Winter hardiness is a complex selection trait that reflects the ability or inability of plants to withstand a complex of adverse effects during the winter period (low temperatures, warming, soaking, squeezing, winter drought, exposure to ice crust, etc.).

How to choose the right shelter

Every rose lover can have their own time-tested winter shelter options. The choice of structures for shelter is always a risk that the owner of roses takes on. When assessing the degree of risk, as a rule, they proceed only from frosts and do not take into account other troubles that roses are exposed to in shelters.

A few comments on the purpose of cover-up activities. The main purpose and, as a result, the design feature of the shelter is a guarantee of successful protection of plants during sharp temperature drops to extreme (limiting) negative values during the snowless period. These values are different for each garden group and even for individual varieties. In unfavorable winter conditions, it is also necessary to smooth out the amplitude of temperature changes and exclude possible negative consequences in winter and early spring.

When planning any shelters, we must assume that our main insulation material is a good snow cover. Our task is to properly organize snow retention. In addition, any design must provide sufficient reliability and the possibility of self-ventilation, not everyone can live near roses all year round. From these positions, the most important drawback of any shelters is their tightness. 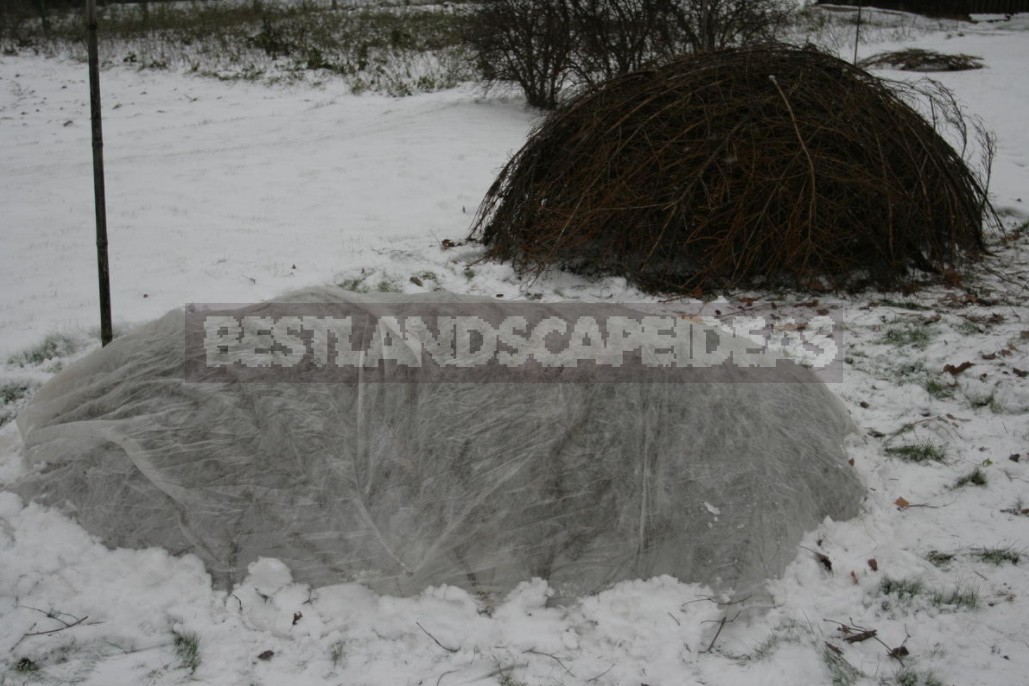 When organizing shelters, we assume that the roses need a small air chamber and a roof over it made of loose snow. A frame is installed above the roses (not too high), and a non-woven covering material is stretched over it, allowing air to pass through.

When installing load-bearing frames, it is better to use plastic tubes instead of wire, which exclude injuries and freezing of shoots in places of contact. Consider the load – bearing structure in order to avoid sagging of the covering material-thus you will ensure the guaranteed removal of excess autumn water and thawed spring water. Sometimes a temporary roof made of film is installed over the plantings in the fall, which is removed before the final shelter. 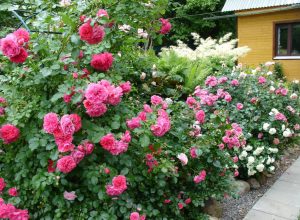 Planting Roses: How, When, And Where 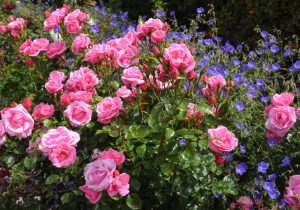 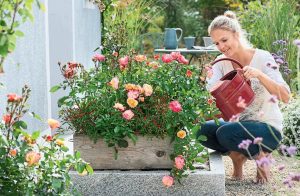 Garden Roses In Pots: Features Of Care And Composition 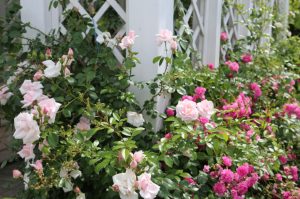 Combination Of Roses By Color: Choosing a Color Scheme For Garden Compositions (Part 2)