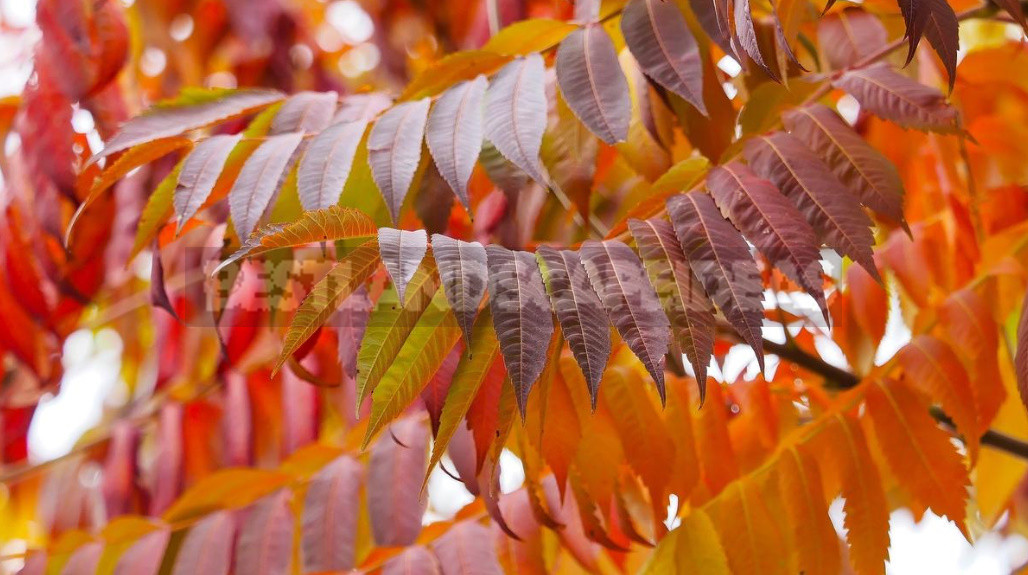 Sumac caused mixed feelings, scaring, and pulling. In what other way do plants unite, some of which strike with their touch, causing severe illness, and others serve for the preparation of refreshing drinks and desserts?

Most sumacs — both harmful and harmless — can only grow in warmer areas than the middle band.

Rhus coriaria occurs on dry slopes, in pine or juniper forests, where it may wander vacationer, tired of lying on the beach.

This small spreading tree with feathery leaves is immediately recognized by the dense inflorescences of small greenish flowers at the ends of the branches. Blooms in late summer, and late autumn ripen red fruits, covered with thick protruding pubescence.

However, in horticulture, more winter-hardy American species have spread. The first head should be called R. typhina. 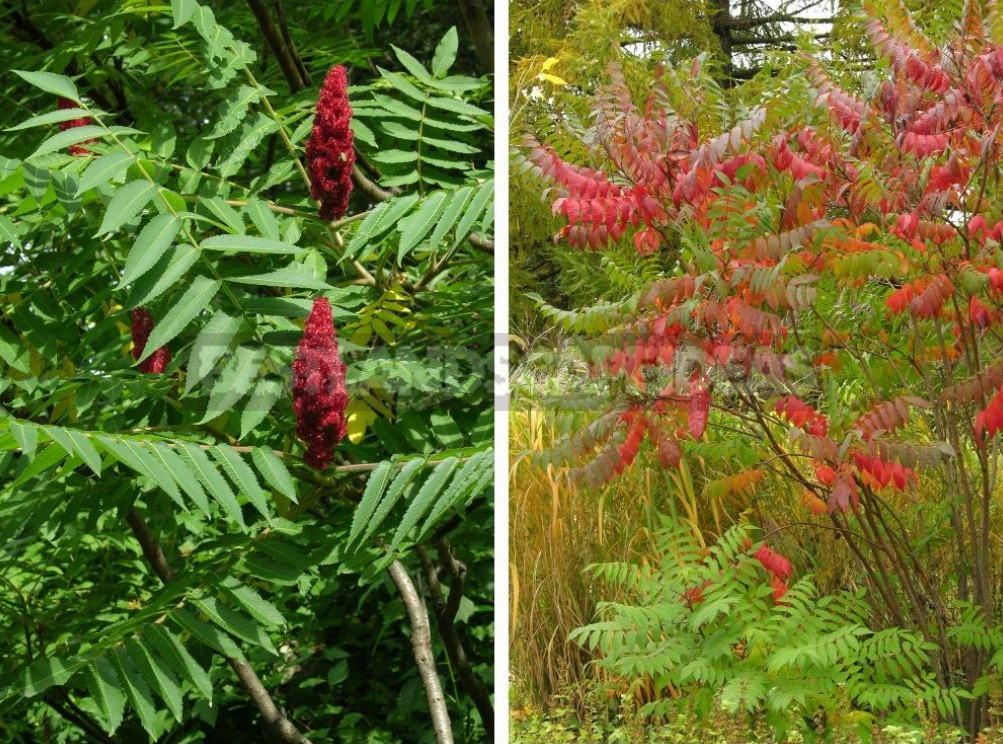 Grows small low branching tree or shrub. Thick branches, especially at the beginning of the season, covered with light velvet. The leaves are large, almost like the Manchurian walnut, the dark and shiny leaves reach 12 cm in length. Blooms as well as Rhus coriaria, fruiting bunches more than 20 cm long.

Freezes slightly. The frost is replaced by formative pruning, shortening long shoots and causing them to branch, the Bush becomes thicker and more compact. It is useful to cut off some shoots to the base, provoking root growth. This process contributes to the longevity of the plant. There is evidence that single-stemmed trees somehow live less than surrounded by overgrowth.

The cultivar ‘Dissecta’ is marked pinnate leaves. From ‘Laciniata’ leaves are simple with long teeth, the inflorescence is dominated by long curled bracts.

Less common very low and graceful R. glabra, which is named because of the naked branches. Still it is distinguished by sticky glandular pubescence of fruits. Also has a variety with carved leaves. It is considered less hardy, although according to the American directory (A. Rehder, 1949) the opposite is true. These species hybridize easily even in nature. 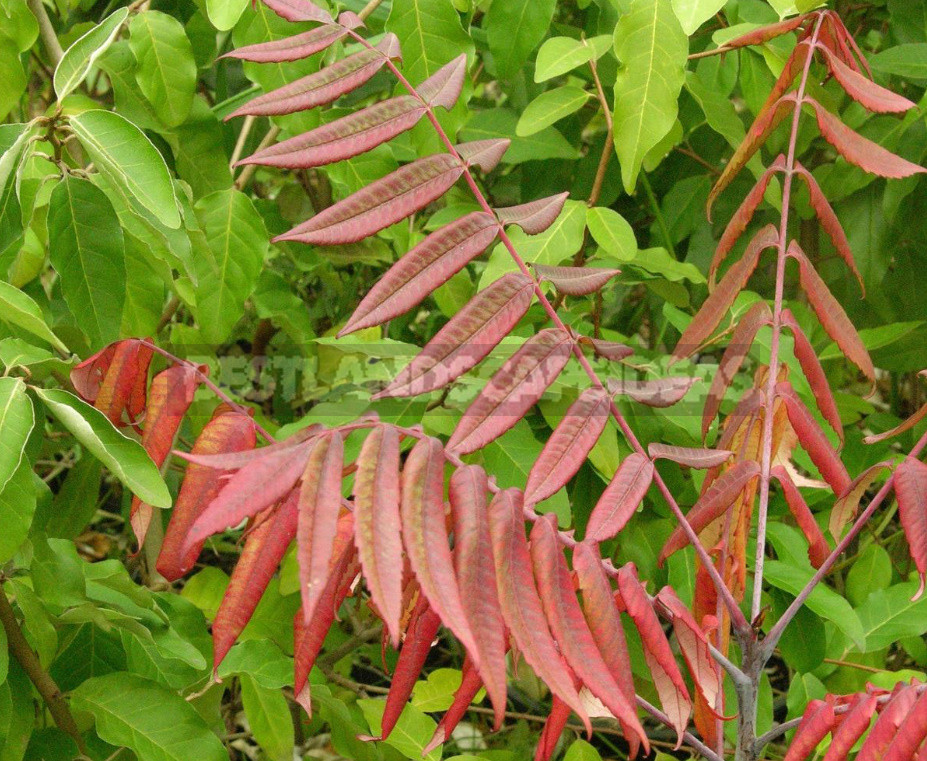 R. aromatica and R. trilobata can be found in the rare garden centre. These are shrubs with trifoliate leaves, usually about 1 m tall, although they may be higher. Small yellowish flowers are collected in short dense panicles on the tops of shoots and bloom before the leaves. Fruits are red and fluffy.

R. aromatica has serrated leaves up to 7 cm long and a pleasant resinous smell. According to other sources-emits a stench. Will have to check out when the seller will turn away… the shape of the Bush varies greatly. She’s usually more or less prostrate. Particularly low var. arenaria, which is found on dunes, and at var. serotina Bush sticking out. 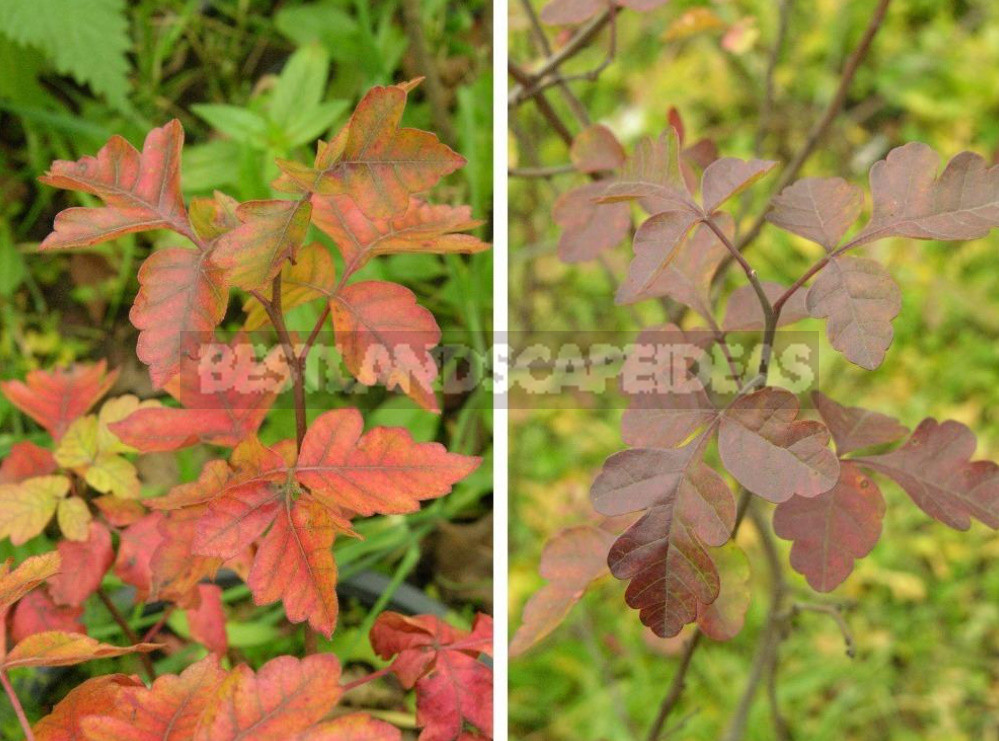 Poison from poison oak this bad harmless are different is easy: they have apical and axillary inflorescences usually glabrous and bright fruit. This is enough to separate them into a separate genus – Toxicodendron, although not everyone agrees.

A lot of talk about the dreaded R. orientalis = Toxicodendron orientale – scandent or decumbent shrub with smooth trifoliate leaves from oval one-piece leaves. The flowers are typical of the poison oak this bad — greenish, gathered in small inflorescences; fruits whitish, pubescent.

Its damaging substances can cause excruciating dermatitis both in direct contact with the skin and when inhaling smoke from the fire, where it was accidentally thrown. Just need to mention that it works not at all in need of some susceptibility, however, when the validation should not jump to conclusions – the action does not occur immediately, but after a period of time from several hours to days. But with a direct hit in the body, it affects absolutely, causing rheumatic pains throughout the body, heart disorders, inflammation of lymphatic tissues and other “pleasures”.

Few people want to enjoy the company of such a plant. Even though nettles can be great to spoil the mood, everything depends on its quantity. 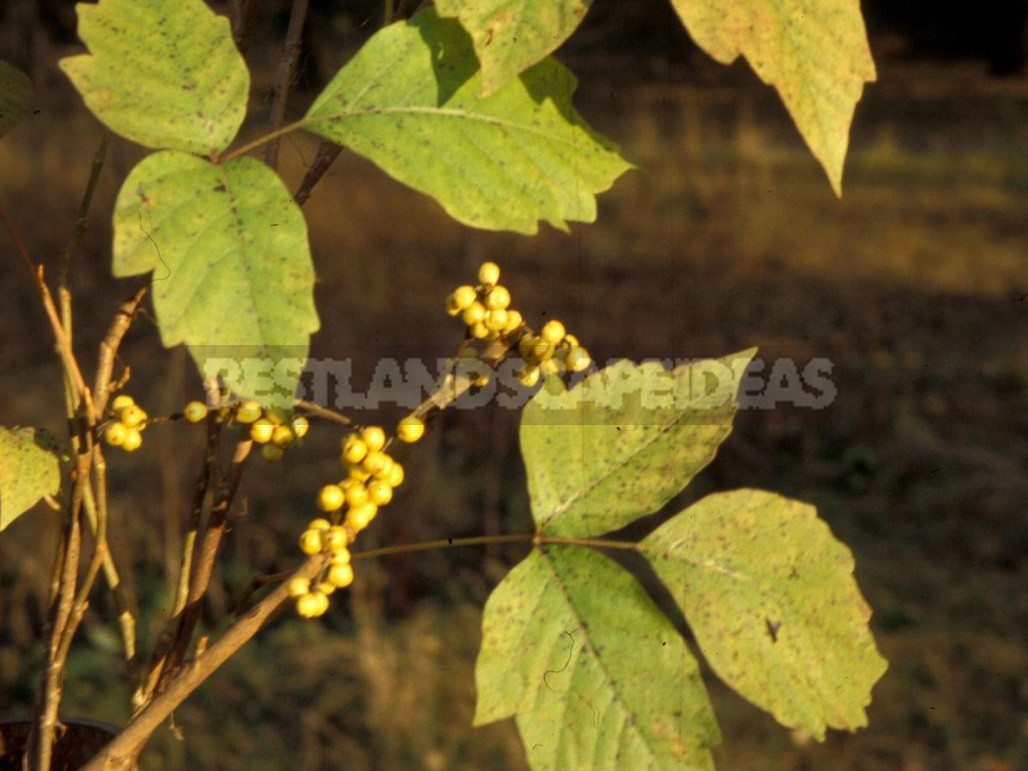 For example, R. radicals = T. vulgare, which is often mentioned in American films. Touch that checked, not amazing. It does not give a wonderful autumn coloring in red. I guess I don’t like it.

Other climbing and crawling, including myself and R. toxicodendron, are more thermophilic. However, because of the similarity of rooting and poisonous, they are constantly confused, and it is often unknown who is actually grown. 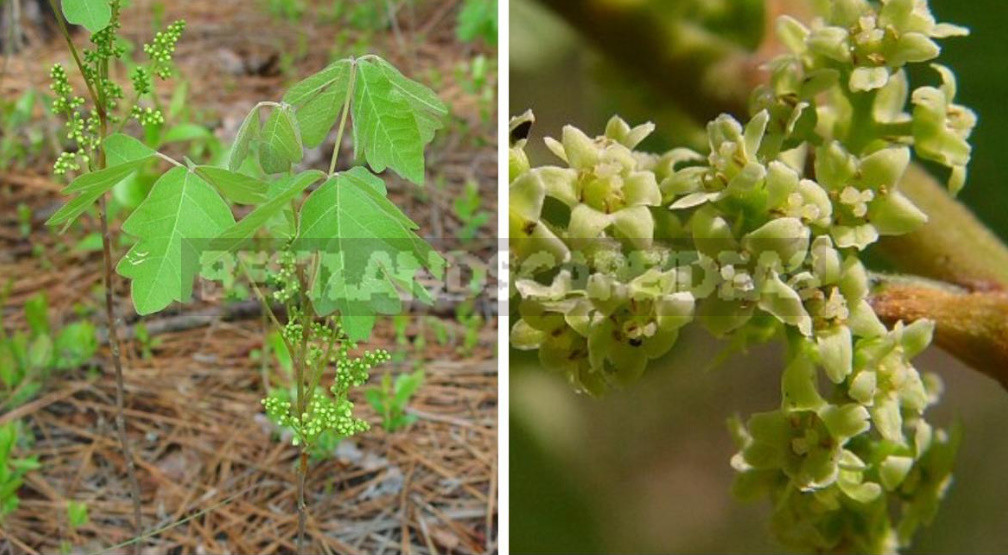 Harmless poison oak this bad is very light. In respect of fertility and mechanical composition of the soil picky. Although in nature prefer rocky, especially limestone areas and sandy loam in the garden respect the soil and moderately watered. Quite drought-resistant. 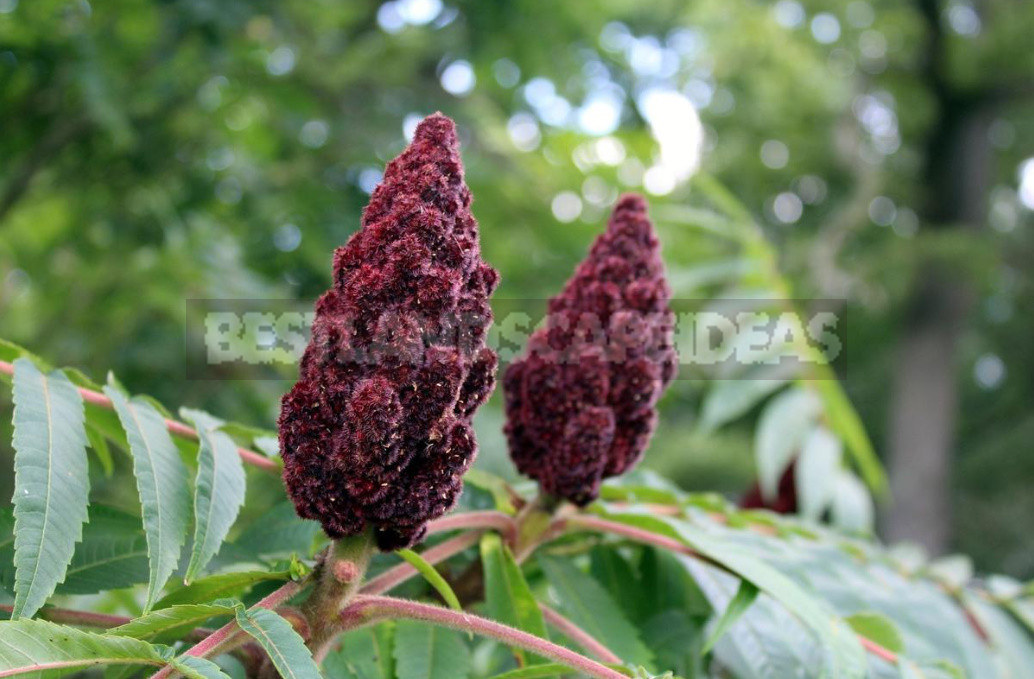 Toxicodendrons thrive in the shade on fertile moist soils. Harmless sumac especially adorn the garden in the autumn, when the leaves turn purple shades, and the fruits are filled with blood and ready for collection. Toxicodendron it’s hard to say what is needed.

Many sumacs are dioecious and produce seeds only in the presence of male and female plants. Seeds washed from the pulp, pour hot water and leave for a day. It is believed that when the shell is damaged, they germinate better. Sow in the spring or (better) autumn. Vegetatively propagated by root offspring and green summer cuttings in the usual way.

Try cautiously, because in some cases marked by allergic reaction.

1. Drink
Collect ripe fruit. Some can be dried for winter use. A Cup of berries, pour a liter of boiling water and then 15 minutes. If you use the whole bunch, along with twigs, the drink will be bitter. Strain through a thick cloth and add sugar. Use both hot and cold. Tastes like lemon.

2. Syrup
0.5 cups dry crushed fruit + 1.3 cups water + incomplete Cup honey (about 3/4) or 1 Cup sugar. Stir, bring to a boil and insist for 15 minutes. Repeat until the syrup thickens. Then place in refrigerator for further thickening. You can also use the pressed juice of fresh berries.

3. Jelly
Take two cups of infusion of berries, prepared as for the drink. Add two cups of black elderberry juice (not everyone will like black elderberry, but I think that you can choose another option-a lot of different berries). Boil and knead 5 cups of sugar, boil more, add gelatin and continue to act as in the manufacture of any jelly.

Can Rhus coriaria berries be used in this way? There are indications that they are poisonous. If they are included in recipes, it is as minor additives. For example, a popular middle Eastern spice ‘Zatar’ contains the crushed fruits of the sumac, thyme or oregano, sesame seeds and salt. Seeds can replace the mustard, contributing to the appetite and unripe fruits of pepper. 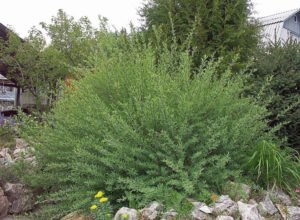 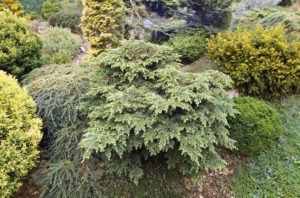 Coniferous Miniatures. Dwarf Varieties of Coniferous Plants and Features of Their Cultivation. 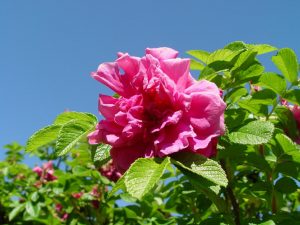 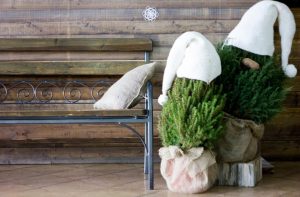