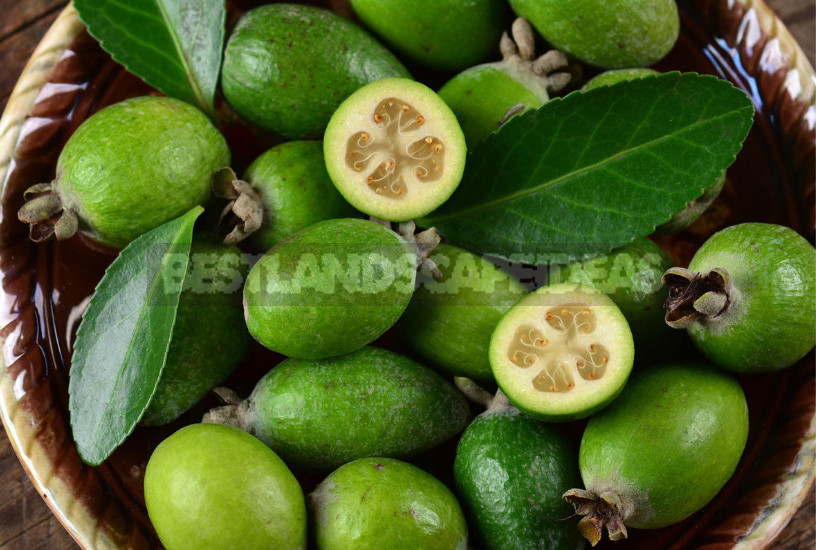 After pineapples, avocado, mango and carambola first in large supermarkets, and then on the stalls of street vendors appeared exotic green berry with a pleasant name. Feijoa, the birthplace of South America (Brazil, Northern Argentina, Uruguay), for a short period of time overcame two oceans and took root in New Zealand and Abkhazia.

First of all, it must be said that feijoa berries are very useful. They can be considered a concentrate of vitamins and minerals needed by the human body, especially in winter. 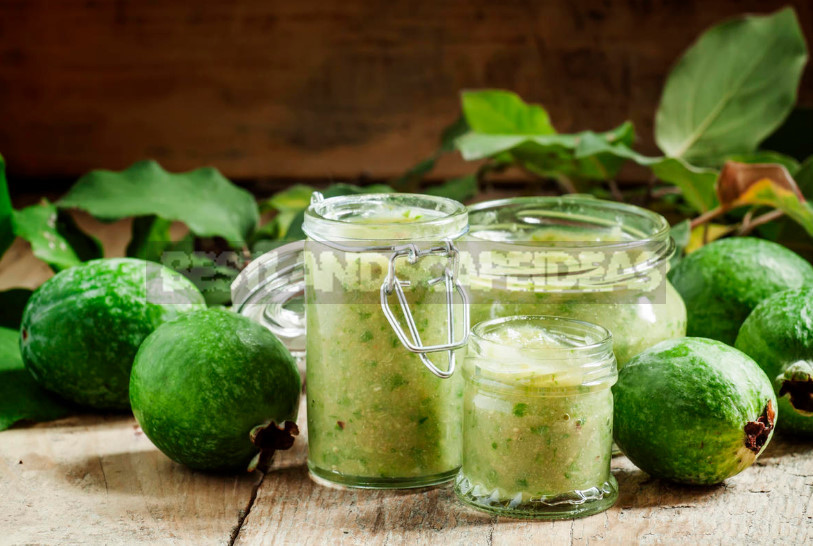 A large content of vitamins b and PP, a lot of potassium, manganese and antioxidants — this is a big plus, but our native currants, cranberries and rose hips in this is not inferior to the exotic fruit. But the fact that feijoa berries grown on the seashore have an iodine content of up to 35 mg per 100 g is simply amazing. That’s more than seafood! However, plants cultivated far from the sea, produce fruits with significantly less iodine – up to 9 mg per 100 g of product.

Thanks to an interesting combination of useful qualities of these exotic berries are used in different areas. It is used in cooking, cosmetology, folk and scientific medicine, wine and candy fillings are made from fruits. One of the biggest advantages of feijoa — berries can be frozen and then cooked without loss of taste or deterioration of creamy fragrant pulp.

Feijoa is a versatile fruit used in cooking in the preparation of cakes, desserts, sauces, jams and jellies, in some countries it is also served as a side dish to meat dishes. It is best to eat fresh berries collected ripe. In this case, you will get the maximum amount of benefit and pleasure. Cut the berry in half across and choose a juicy pulp with a small spoon. Very tasty! 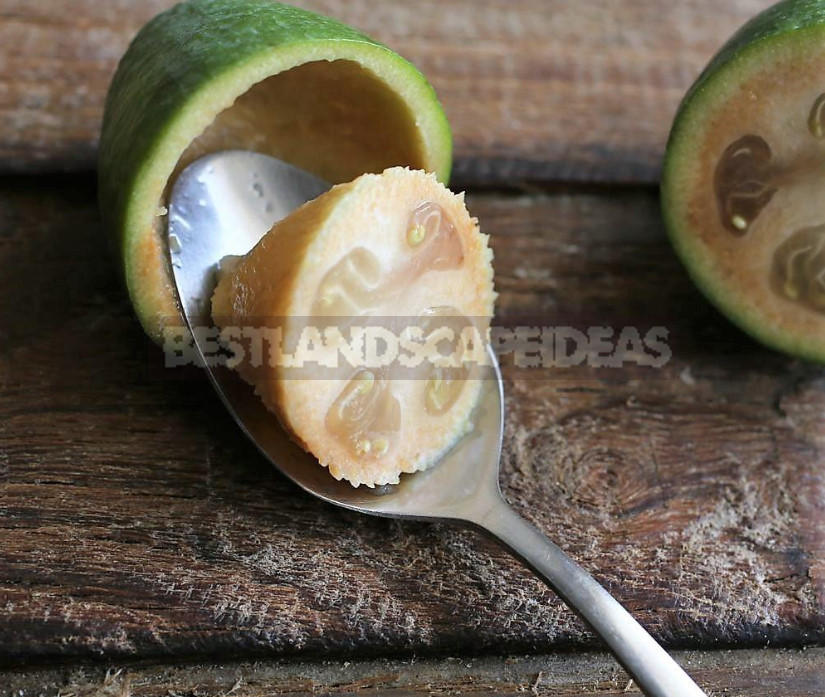 Given that stored feijoa very long, invented many recipes blank. By and large, they are divided into implying heat treatment, and without it.

The easiest way to stock up on vitamins-is to twist on a meat grinder or grind with a blender washed fruits and mix with sugar in a ratio of 1:1. The mass shift in a clean, dry jars, cover with plastic lids and store in the fridge. 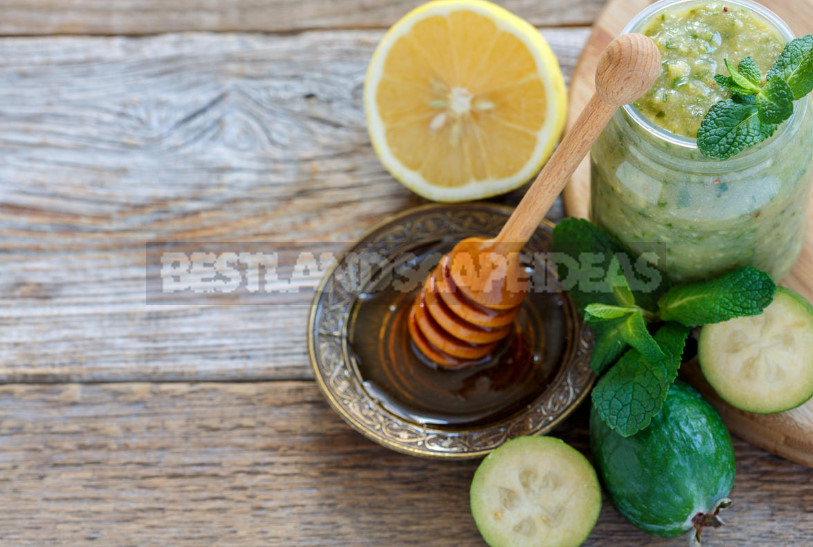 Even more useful is to take natural honey instead of sugar and add lemon to the mixture. 1 kg of feijoa berries will require 1 Cup of honey and 1 small lemon. Have a feijoa cut off the tips of the sepals with the lemon and cut it into small pieces while removing the pits. In a blender (or using a meat grinder), crushed berries and lemon, then honey is mixed in the mass and laid out on the banks. This raw jam should also be stored in the refrigerator.

Feijoa is successfully used in home cosmetology, as it contains a lot of antioxidants and catechins. Face masks improve skin turgor, clean it and nourish.

Rejuvenating mask is prepared from feijoa and sour cream. To do this, 2 berries are cleaned from the skin and knead into a pulp, add 1 tablespoon of sour cream and mix well. Apply the mask on the face and neck is not very thick and left to dry partially. 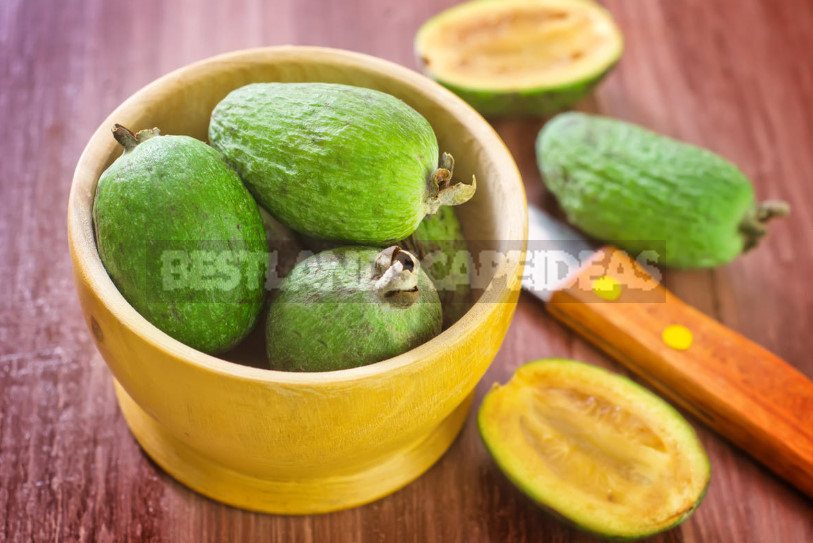 Well softens and nourishes the skin of the hands cream, prepared according to the following recipe. In equal proportions (for example, 1 teaspoon) mix the pulp of feijoa, olive oil and honey. Massaging the mass is applied to the skin of the hands and leave for 15-20 minutes, then washed off.

Supporters of both folk and scientific medicine recognize the extraordinary health benefits of feijoa. Here are the six main beneficial aspects of these berries: 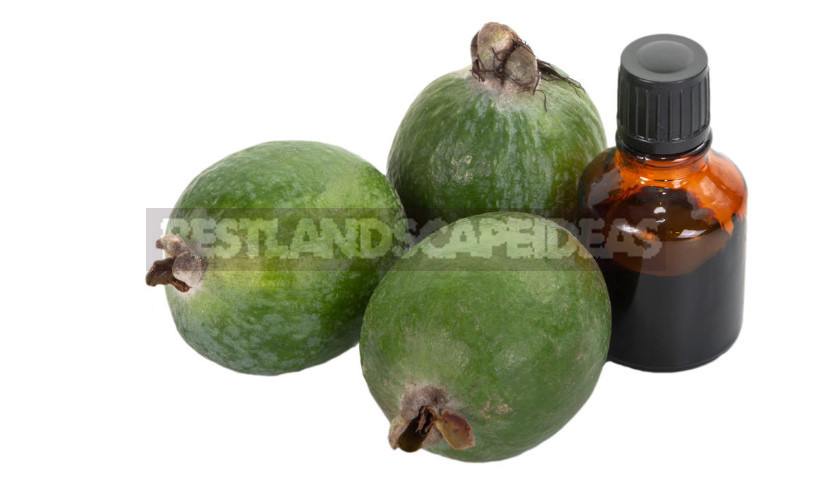 There are also contraindications to the use of feijoa. First of all, this applies to patients with hyperthyroidism. The attitude of doctors to the use of this berry by diabetics is ambiguous. Some believe that the feijoa does not harm and has an excellent variety to the menu, others are strongly against the inclusion of this berry in the diet of patients with diabetes. Allergic reactions to the use of feijoa are extremely rare, but people who are prone to an acute response to exotic products should be careful.

The Festival of Landscape Art
Extruded Polystyrene: Real Properties, Usage
The Magic Power Of Spinach
Summer Shower With Your Own Hands From Profiled Flooring And Clapboard