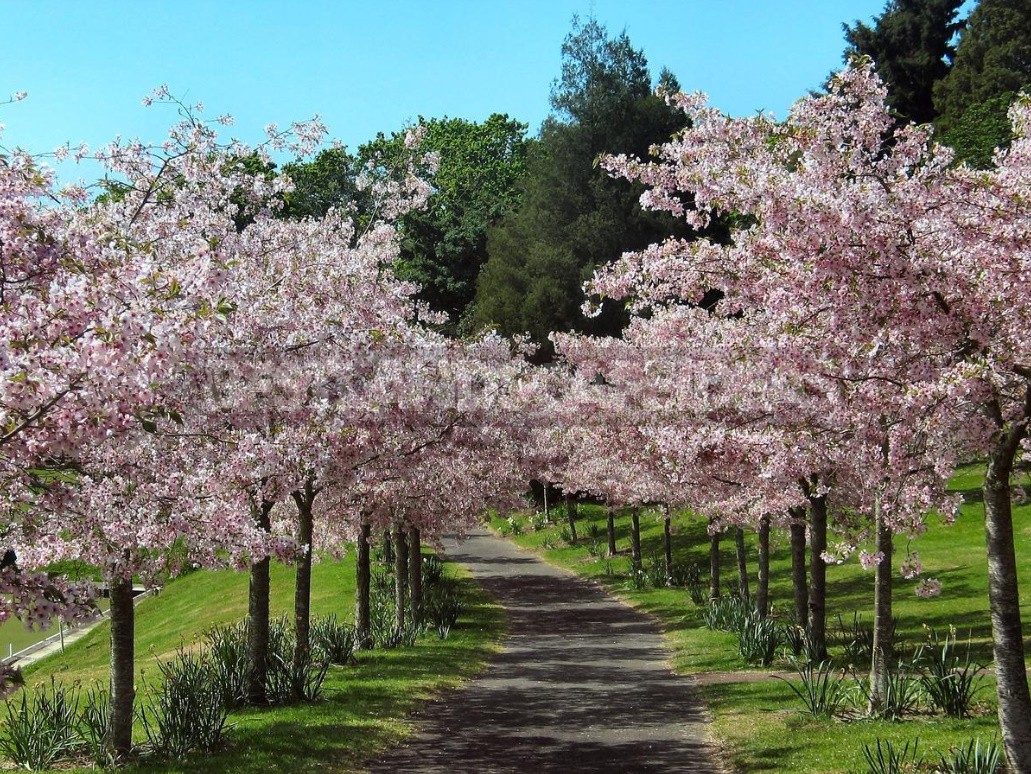 The oldest Apple tree in the garden is more than 50 years old, and it is still full of strength and beauty, regularly bearing fruit. Under its crown, Doronicum blooming in may and June with bright yellow daisies, late Tulipa of the Rembrandt group (red with yellow and red with white, as if painted with an artist’s brush), as well as several bushes of Paeonia lactiflora ‘Mrs. Franklin D. Roosewelt’ (bright pink, Terry), blooming in late June-early July.

Later, a tall white-purple Aconitum blooms behind them, successfully protected from children by the lush carved leaves of Paeonia. The large trunk circle is complemented by a spectacular Rheum with its high peduncle with fluffy inflorescences and large corrugated leaves; it grows closer to the blackcurrant hedge on the Eastern edge of the site. A border of Viola tricolor, which blooms from spring to frost, frames this flower garden under an Apple tree.

The attraction of the garden was the “Tulipa glade”, which is spread out under a very respectable age Apple tree. Before Tulipa blooms, it is adorned with yellow and purple Crocus, blue Scilla sibericaand snow-white Anemone nemorosa. Colorful Tulipa of the Rembrandt group freely bloom under the translucent may crown of an Apple tree.

In summer, they are replaced by Calendula and the ubiquitous Viola tricolor, which grows from self-seeding and shows magnificent “portrait” flowers in the most bizarre combinations of colors, strokes and spots on the velvet fabric of its petals. This year, under the dense crown of the Apple tree, numerous white flowers of Tanacetum parthenium, blue Campanula and Veronica, and a bright two-colored Rudbeckia hybrida were lit up. In the most secluded shady corners, Onoclea sensibilis, a rare garden fern, now lives. 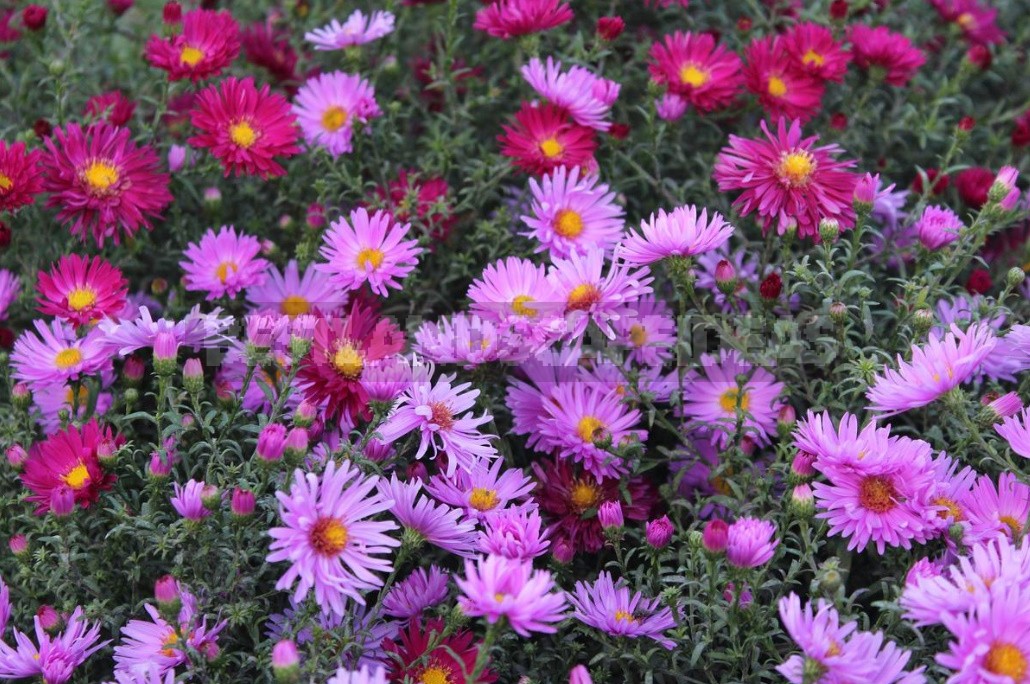 From the end of July or in August, a surprisingly bright Symphyotrichum dumosum blooms with a magnificent regular spherical shape of the crown, which it forms independently, without the participation of the gardener, especially successfully — in good light. Lilac-pink, purple, white and blue bushes-balls asymphyotrichum dumosum perfectly match with tall Symphyotrichum novi-belgii and Symphyotrichum novae-angliae, blooming in the garden almost last and decorating it even after frosts and the first light snow. These types of perennial asters should definitely settle in your garden. They can grow under the canopy of trees, without taking up much space, but at the same time playing the first violin in the autumn Symphony of colors.

If you are fascinated by the idea of flower beds under the crowns, then you can start with monotypic plantings that practically do not require care. This is what our neighbors did when they planted Oenothera fruticosa, Lychnis flos-jovis with silvery-felt-pubescent stems and leaves, decorated with bright crimson medium-sized flowers.

A very good carpet creates Lamium galeobdelon-a perennial with a branched rhizome, long braided shoots that easily take root in the nodes. It is similar to Lamium album, blooms in may, only yellow flowers. Elegant leaves have a silvery color and green edges. To get a dense carpet, Lamium galeobdelon is planted quite tightly, after 15-20 cm, and this can be done throughout the season. Lamium galeobdelon is also suitable for growing in baskets, tall vases, containers (including in rooms). 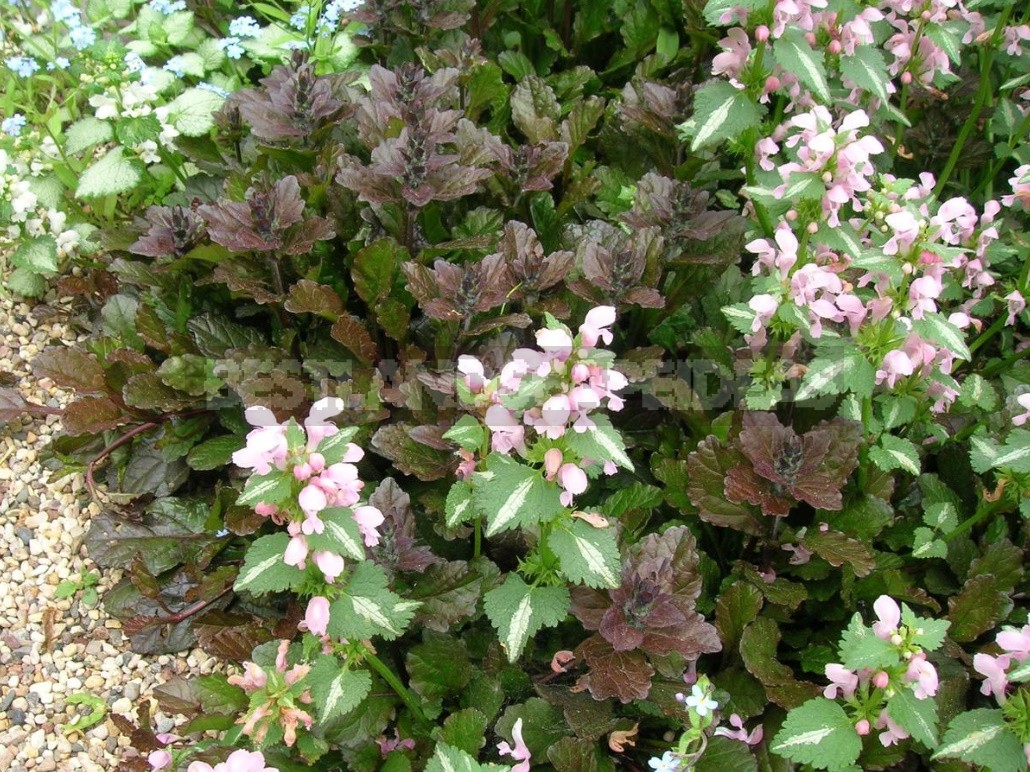 It is no worse than Hosta frames the edge of the flower garden, and feels good almost anywhere in the garden. Even dark places under elms, Linden trees, maples and other trees are elegantly illuminated with a silver Lamium galeobdelon rug. And it is not difficult to find it in the nearest forest, in a clearing, if the planting material does not appear in the nursery. Lamium galeobdelon is similar to Lamium maculatum, which has forms and varieties with a diverse pattern of silver and green small leaves. It is more suitable for semi-shady place to preserve variegated leaves.

It is impossible not to mention the evergreen Vinca minor, one of the few species with wintering leaves that turn green in flower beds immediately after snowfall and remain decorative until the end of the season. He alone can make a flower bed under the crown, blooming in April-may with blue-purple bright flowers. But for a change, it is good to plant other plants with it according to the gardener’s taste. 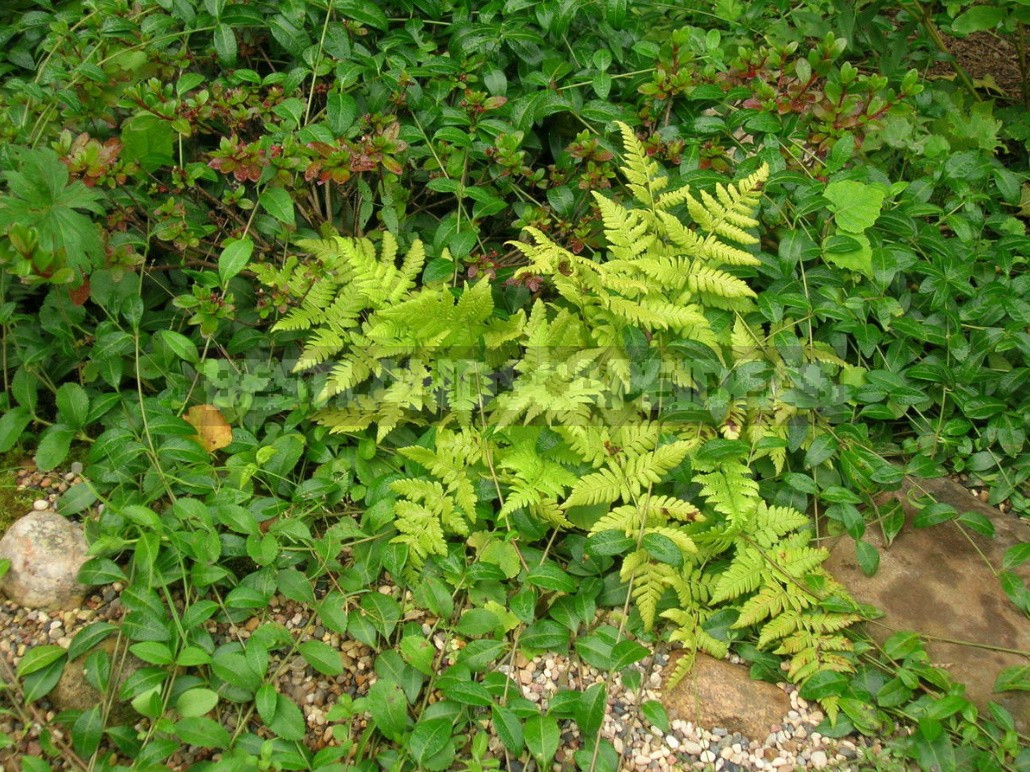 In the darkest and wettest places, a spectacular carpet under a tree creates Ajuga reptans. It blooms in late may-June with low, up to 25 cm, candle-like inflorescences with blue-purple small flowers, the same shape as all Lamiaceae. After flowering, the inflorescences are cut off, and the green carpet remains elegant all season, starting in early spring, since Ajuga has wintering leaves.

Ajuga clings tenaciously to the ground, which is very important when making slopes, crumbling edges of beds. Propagate it with rosettes, segments of stems with rooted nodes, dividing the Bush almost the entire season. Planting material – in the nearest forest, as well as Lysimachia nummularia with long thin shoots, strewn with round opposite leaves-coins and bright yellow flowers. Lysimachia nummularia can also grow on grassy garden paths, covering them with a dense Mat.

Care of flower beds under the crown of fruit trees is to ensure sufficient nutrition for all plants. Early in the spring, nitrogen fertilization is traditionally given on still frozen or slightly thawed soil: urea or saltpeter is scattered superficially at the rate of a tablespoon per square meter of area throughout the garden.

In gardens that are older than 10 years, tree roots are spread over the entire area of the site, so you need to feed the entire territory. Then in June-July, two more top-UPS are given with full fertilizer in accordance with the recommendation on the package. Rain will help the fertilizer to slowly absorb, and if it is dry weather, you can water the site. 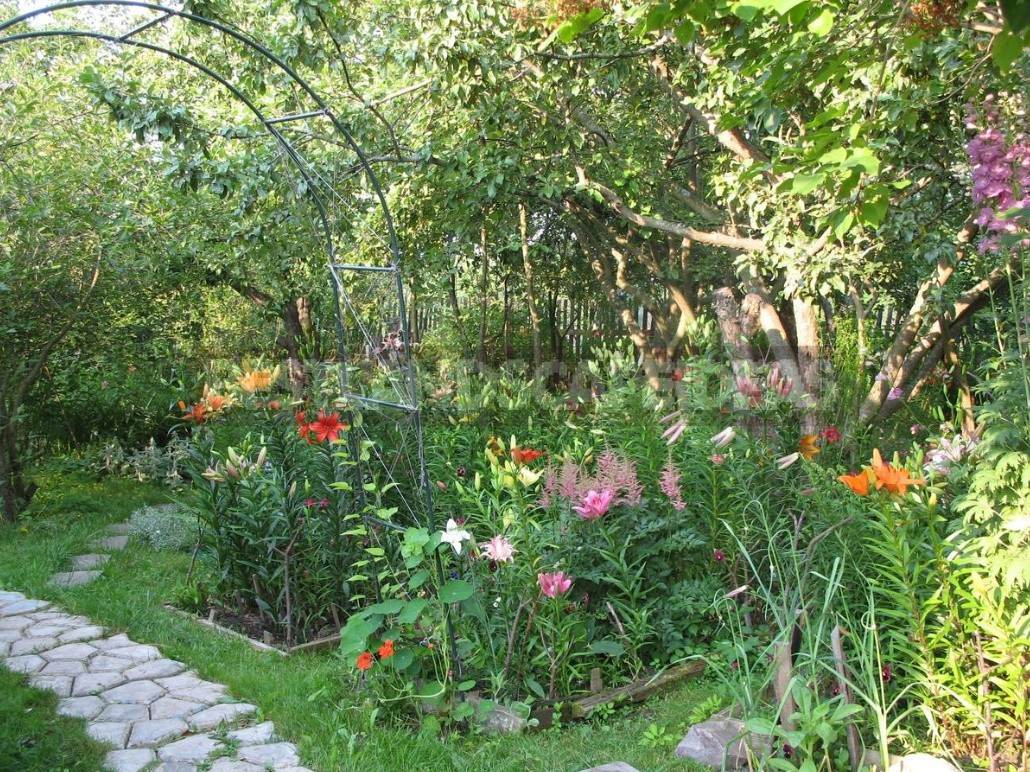 In autumn, it is best to make an nitrogen-free and chlorine-free complex fertilizer that works in the soil for 2-3 years, is not washed out by precipitation, slowly melts and gives the plants nutrients in the most suitable form for them.

During the season, the soil is finely loosened using a flat cutter. Since flower plants densely cover the entire area under trees and shrubs, weeds have almost no chance of survival, so weeding single instances of weeds does not take much time.

Watering the garden is carried out, as necessary, during prolonged dry weather. In September, the soil that is clean from weeds is mulched with compost or limed peat in a layer of 3-7 cm, after cutting off the stems of faded plants. You can leave these cut stems in place, folded for better snow retention, and in the spring, put them in a compost pile or burn them. 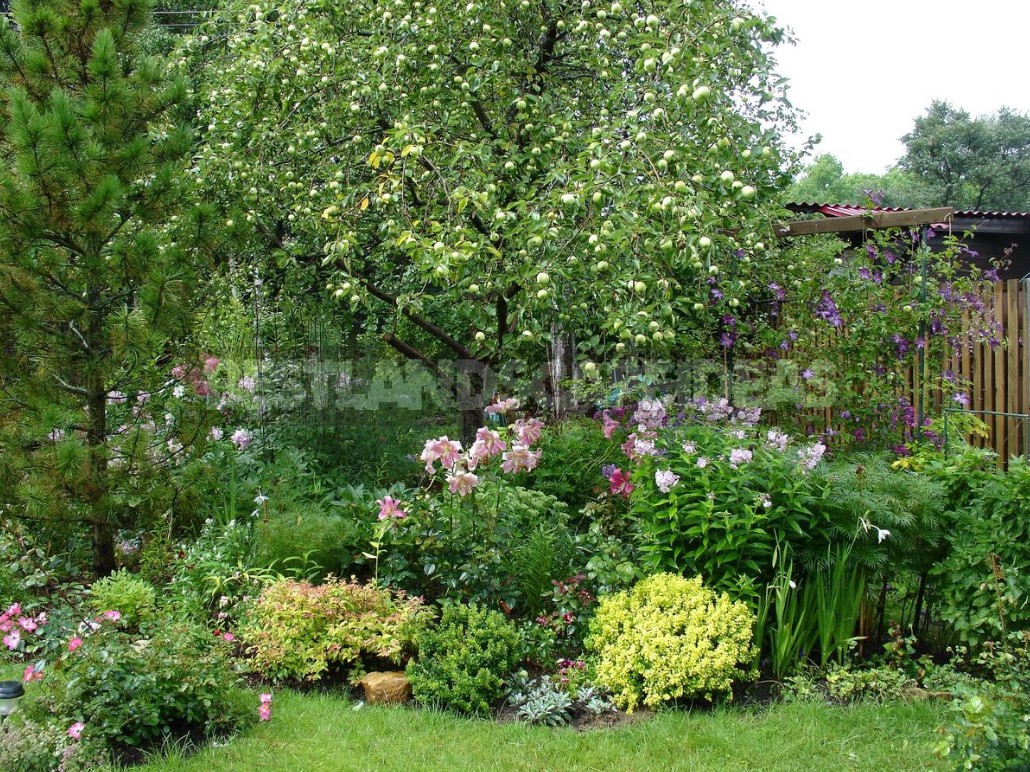 Flowers live well in a fruit-bearing garden even at a very Mature age, they enliven it with their colors and aromas, and let there be more such gardens.

How to Get Rid of Slugs Forever
How to Install the Expansion Tank in the Heating System
Brick: History and Modernity
Creating a Multi-Level Garden: Landscape Design Techniques (Part 1)