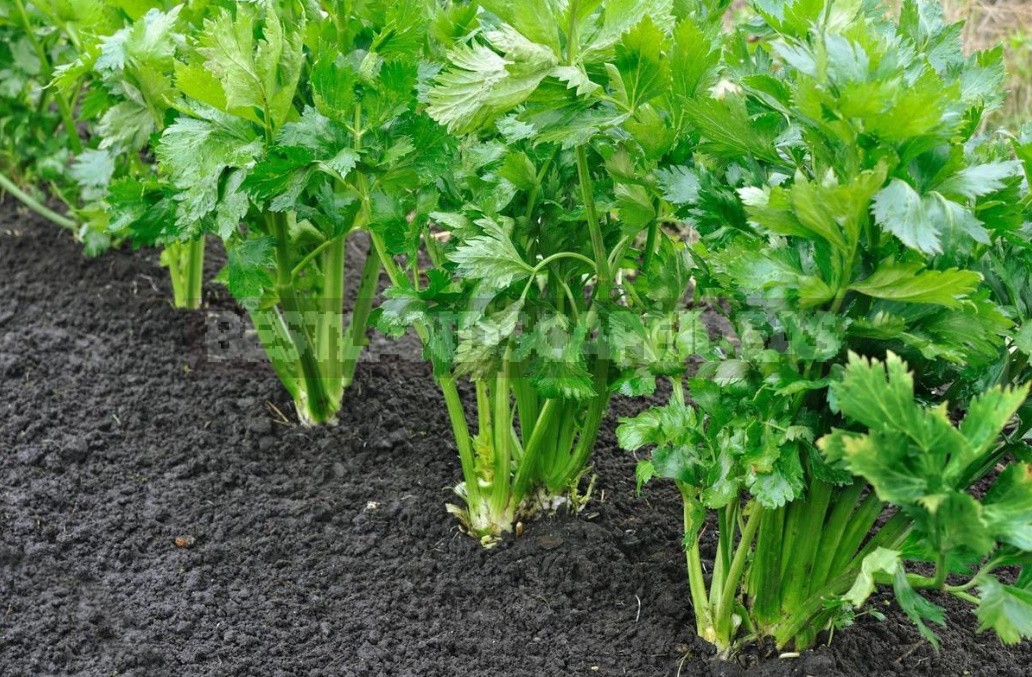 Not every gardener understands the value of celery, but those lucky ones who “saw through” this fragrant vegetable are not lazy to grow it year after year. Everything in it is delicious, fragrant and useful-and greens, and crunchy stalks, and dense juicy root vegetables.

Celery is leafy, petiolate and root. Leaf celery can be sown directly into the ground. Petioled celery, which has thickened leaf stalks, and especially the root one, has to be grown through seedlings, since it takes about 200 days to form a root crop.

This variety is the most demanding for agricultural technology. None of the points of cultivation can be neglected or let things take their course: in this case, in the fall, instead of large, dense and rounded root crops, you will get “bearded” snags.

At the end of February, fill the yogurt cups (or other similar containers) with moistened soil, seal it and pour 1 cm of snow on top. Then tamp it a little and carefully arrange the celery seeds, no more than three in each Cup (they are dark, clearly visible on white). Cover with glass or film and place on the windowsill. The snow will melt and pull the seeds into the topmost layer of the soil, they will quickly accumulate and ascend. After that, the glass or film should be removed. 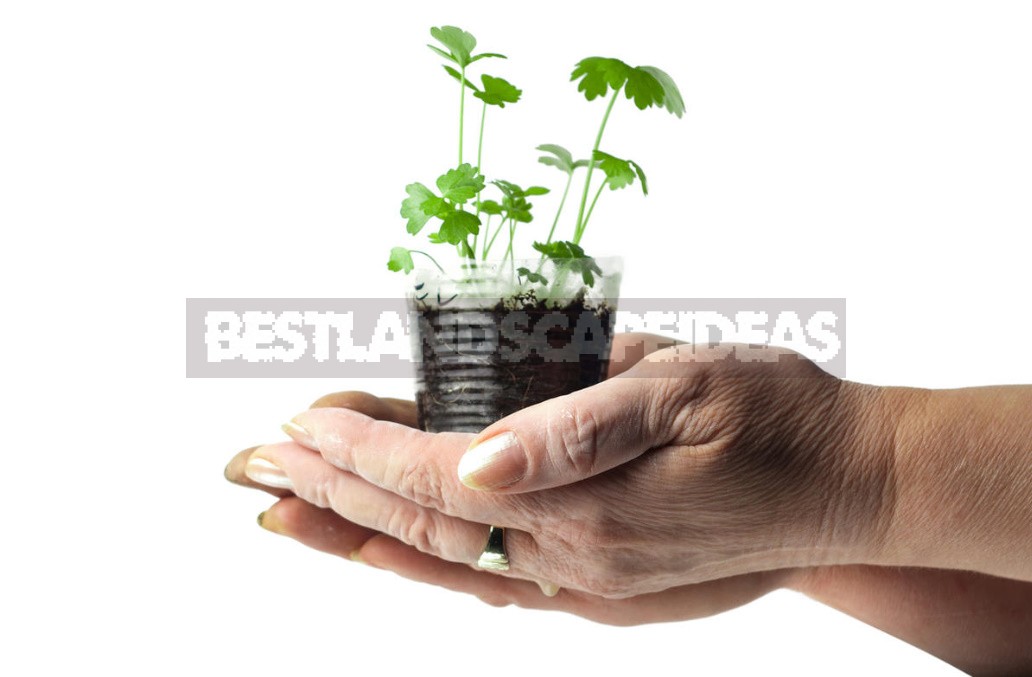 Water the seedlings very carefully. If water gets on the cotyledon leaves, the seedlings will probably die and have to be thrown out. For watering seedlings from small seeds, a syringe is well suited. Take water (or better a weak solution of mineral fertilizer), stick the needle into the soil and slowly release the liquid.

When the plants will have 2-3 real leaves, cut off the extra copies of the soil level with nail scissors, leaving 1 of the best. It must be carefully Spud from time to time with a match, raking the soil to the stems, otherwise the plant may fall and break off the roots. 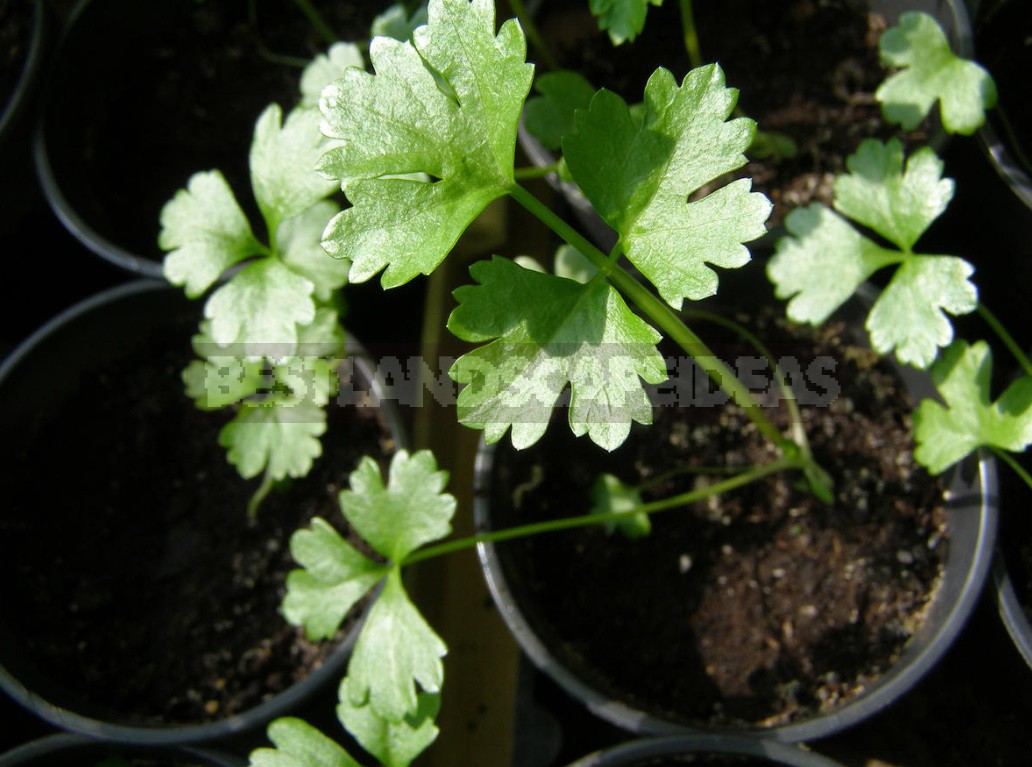 Transfer to a permanent place

In early may, transplant the seedlings to a permanent place. If there is a threat of return frosts, cover for the first time of planting with lutrasil. Keep in mind that root celery is a big fan of fertilizing, when planting it should be taken into account. 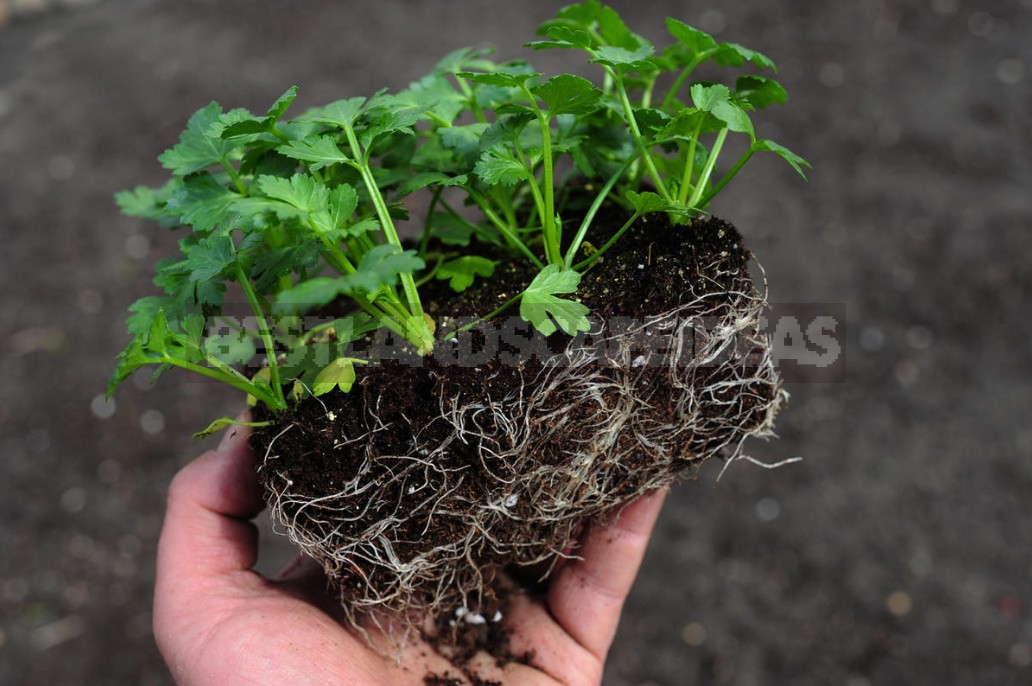 Prepare the holes, fill them with water and transplant the seedlings, sinking the plant to the cotyledon leaves. Since celery does not like fresh manure, such fertilizing should be excluded, otherwise it will simply rot. If you have a wonderful universal fertilizer, then add a pinch of powder or 3-4 granules (depending on the form of release of the drug) to each well before planting seedlings. If there is no fertilizer, feed the celery with boron (2 g per bucket of water) at the stage of tying the root crops, otherwise they may form voids.

When caring for root celery, you must constantly remove the lower leaves so that the plants have no more than 4 young leaves all the time. Cut and dry the collected greens. It will not retain all the flavor, but it will retain the extractive substances that favorably affect digestion and give a great taste to the first and second dishes. If you grind dried celery leaves in a coffee grinder, you will get flour in which it is good to roll meat or cauliflower before frying (instead of breadcrumbs or wheat flour).

READ  It Is Better Not To Rush: When And How I Plant Cucumbers In The Greenhouse 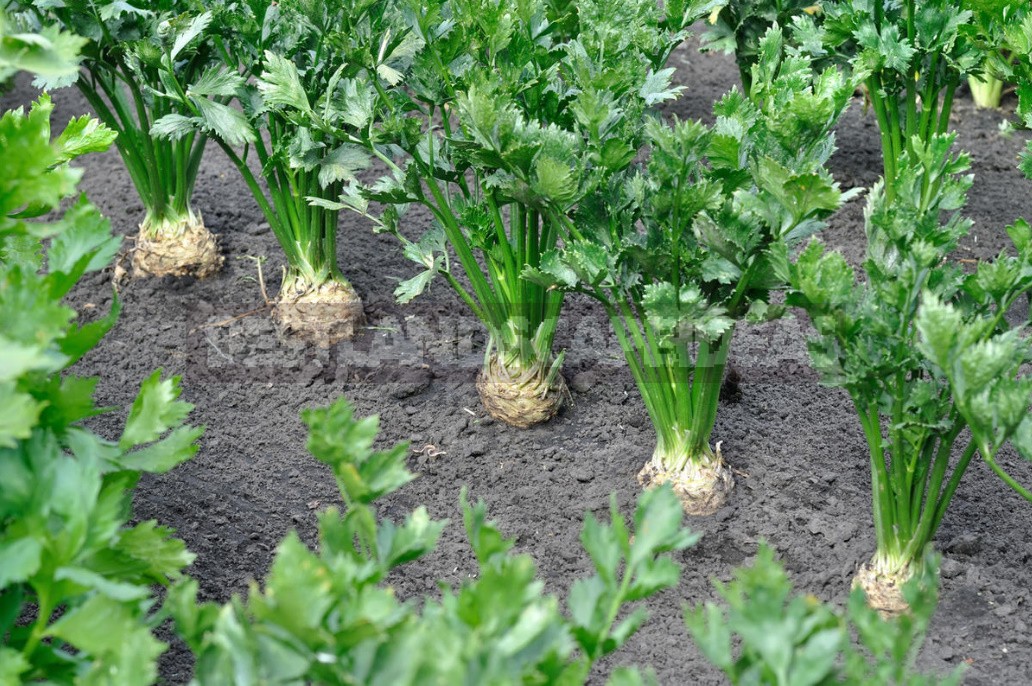 Root vegetables are best used in fresh salads with apples, carrots, green onions, and cheese. You can add it to cutlets, passing through a meat grinder along with meat and onions, instead of a white loaf. The taste of these cutlets is delicious! 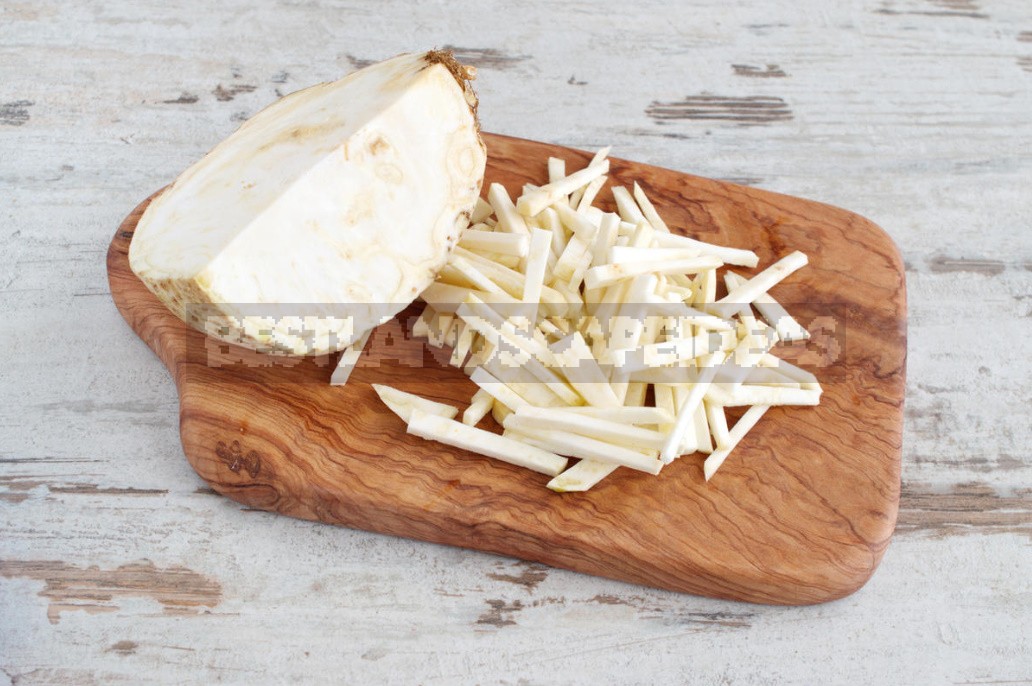 You can boil the root vegetables, roll them in breadcrumbs, and then fry them like cauliflower. Celery leaves contain a lot of sodium, they can be used instead of salt for those who suffer from salt deposition (sodium gives the taste of table salt).

Petioled celery is also grown through seedlings, the seeds are sown at the end of March, the stronger seedlings are transplanted into the ground in the same way as the root one. In the second half of summer, petioled celery, in contrast to the root, on the contrary, is hilled. Leaf stalks are covered with soil to bleach them (when bleaching, they lose their bitterness). 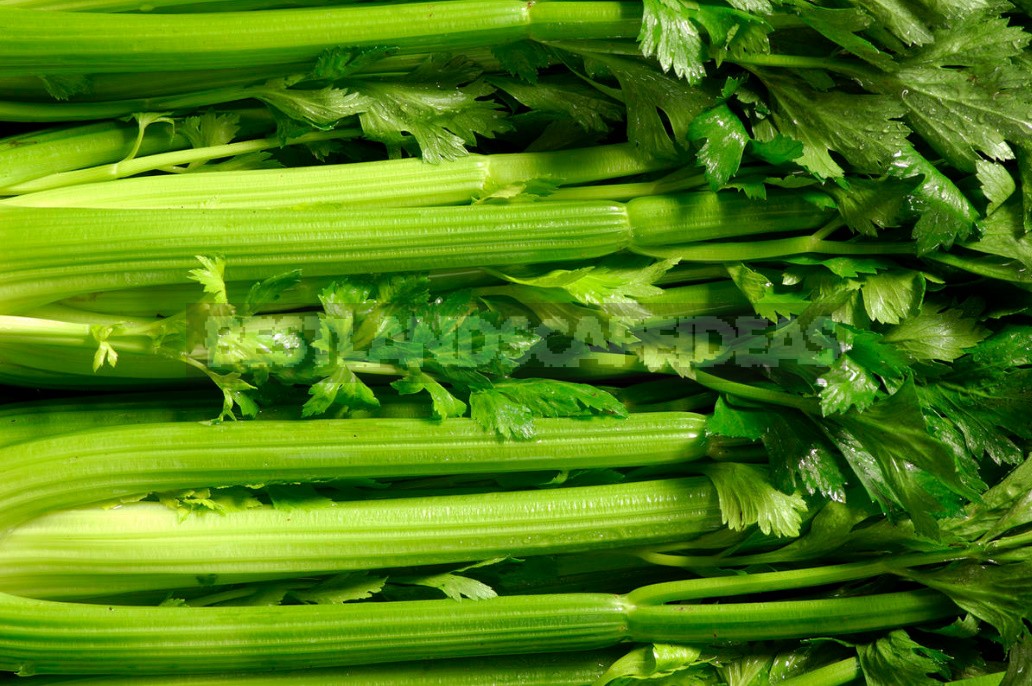 As needed, they are dug up and cut. It is used mainly in raw form — for salads, vegetable juices or smoothies. Root vegetables and stalks can be pickled and salted for the future.

Leaf celery is sown directly into the ground in early spring. You need a fertile soil, which should be filled with ash before sowing (1 Cup per 1 m²). It is important that the bed is weeded, since celery sprouts for almost two weeks and weeds can clog it. Seedlings of weeds should be constantly, as they appear, pruned, sinking it into the soil for 1-2 cm, and left directly on the bed — they will die. 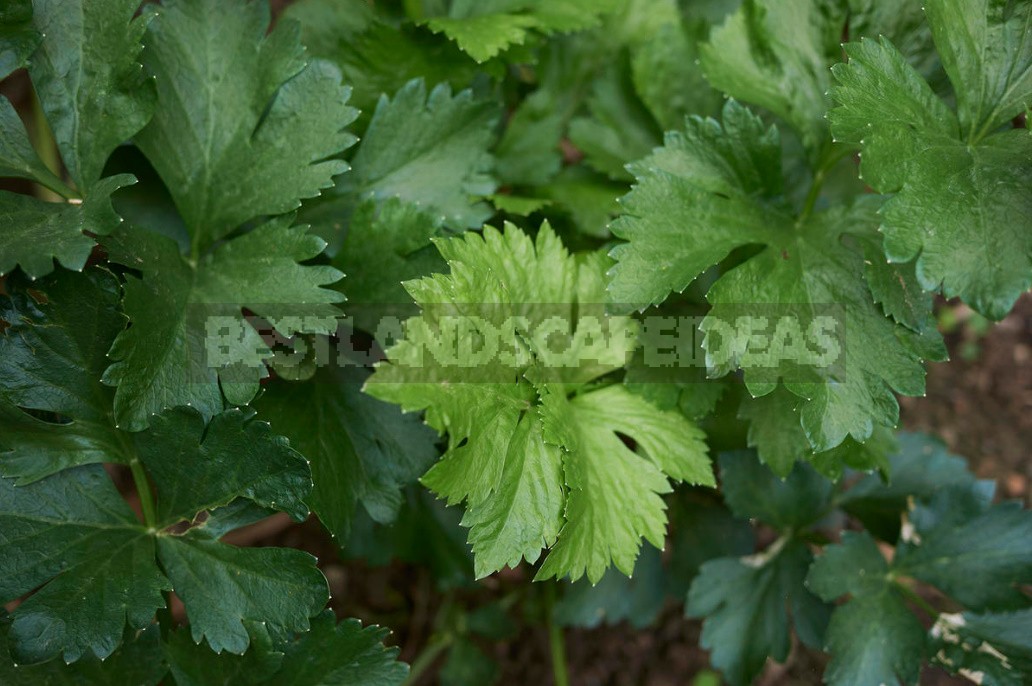 In order not to damage the celery crops, it is good to sow a beacon culture at the same time, for example, leaf lettuce. Several seeds are sown in the grooves along with the main crop. Lettuce will hatch faster than any weed, and its leaves will clearly mark the rows of future seedlings.

In the future, weekly fertilizing with an infusion of weeds (but not manure) will be required. This crop is very responsive to loosening the soil, so as often as possible, loosen the row spacing. Petiolate and leaf celery can not be fed with boron. Despite the fact that celery is a cold — resistant plant, in the conditions of the North-West it does not winter in the soil. Therefore, it should not be left for the winter. 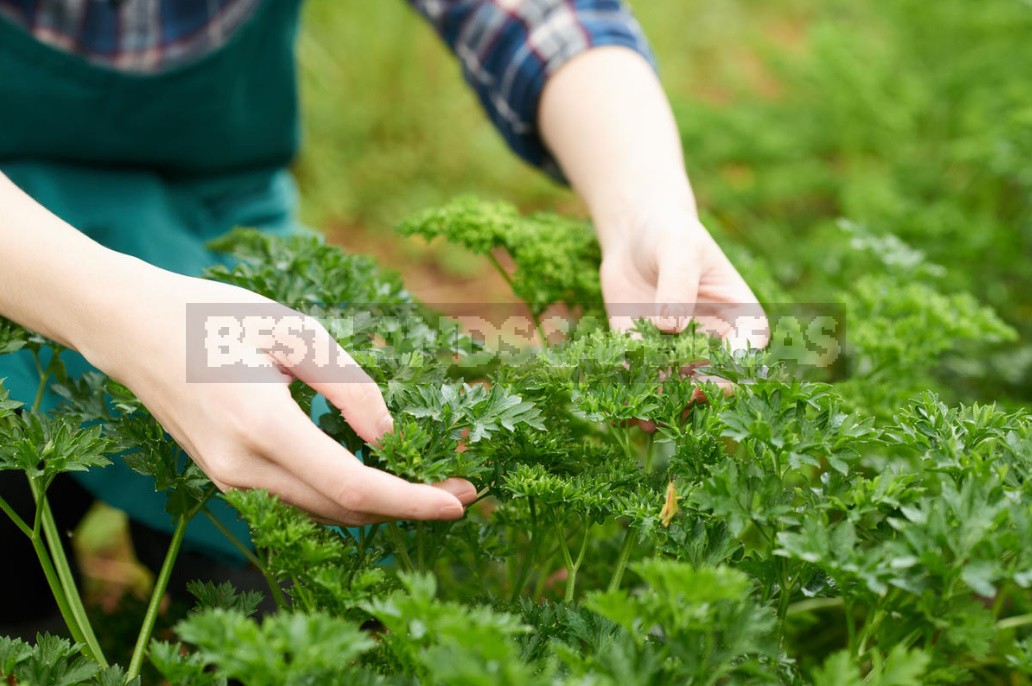 Try to grow celery — you will surely love it and will plant it every year. If you are afraid not to cope with the first time with the root, start with the leaf and petiole.

How to Plant Seedlings of Eggplants
What is Useful Ladybug and How to Attract Her to the Garden
Fat Hilda And Her Suburban Life: Duane Bryers Pin-Up Pictures
Taking a Garden Landscape: Secrets Of Successful Photos