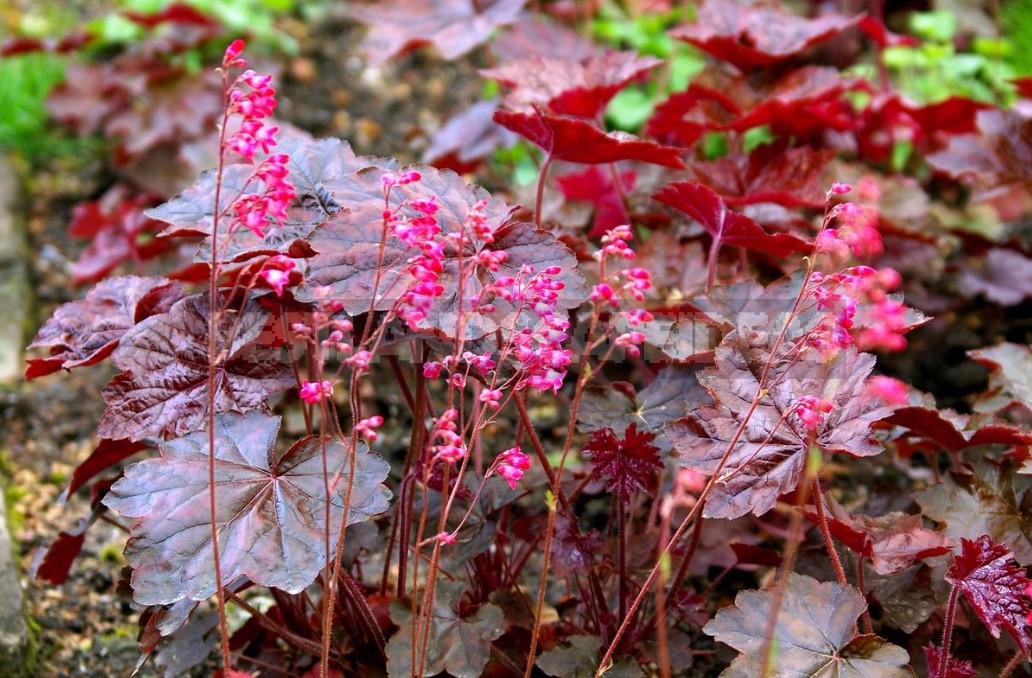 Today, the choice of perennials for cottages is surprisingly rich and diverse. I thought for a long time about what species to tell in this article, and decided to draw your attention to those about which there are almost no publications. For open Sunny places — Phlox subulata, Houttuynia cordata — for semi-shady wet areas and magnificent Heuchera, whose popularity is growing at an incredible rate — for a variety of holiday destinations.

It is an evergreen groundcover perennial in the family Polemoniaceae. He’s great in a rock garden, mixed borders, in the design of the garden paths and containers.

Due to its smallness and ability to form dense sod-pillows 5-15 cm high and up to 50 cm wide, the British call it “moss Phlox”. Flowers with a diameter of 1.5-2.5 cm, today there are many varieties of the most diverse colors (there are two-color). In the South, Phlox subulata first bloom in late February and bloom in colorful carpets until June, the second wave – in August-September. Seeds are almost not tied. 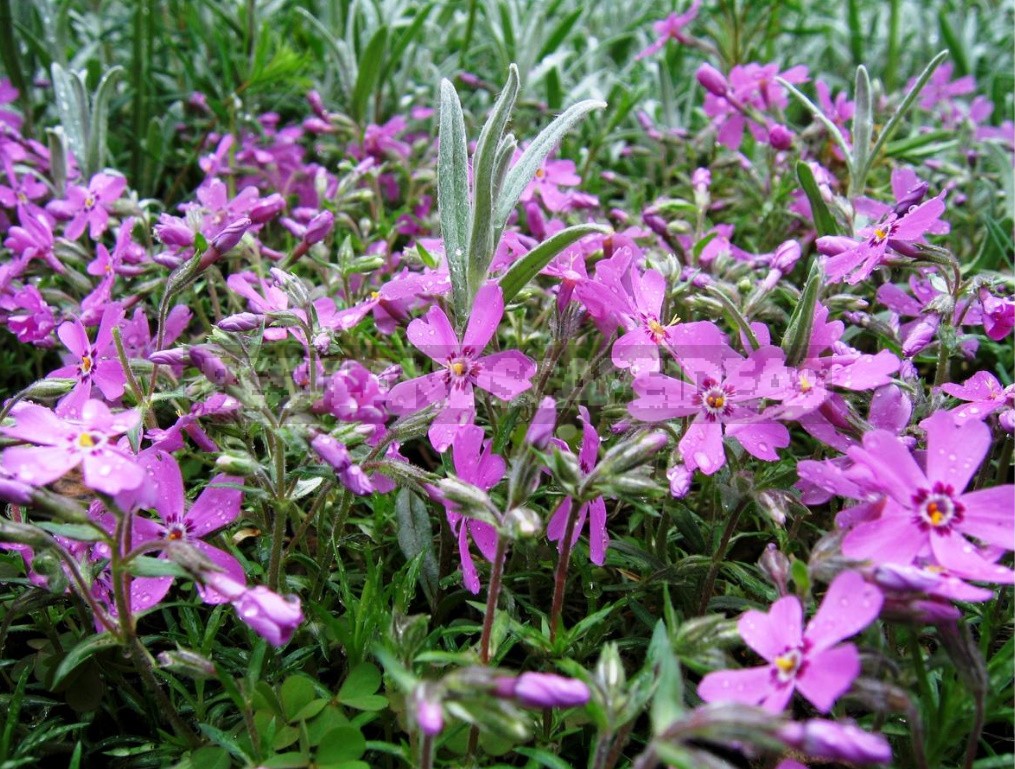 Propagated by division (in the spring, the mother plant is divided into parts so that each had roots; when planting, the top of the rhizome is buried below ground level by 3-4 cm) and cuttings (they are immediately planted in the designated place, with regular watering they quickly take root and bloom the next year).

In aging specimens, the leaves become stiff, the Central shoots become lignified, bare, which is considered a signal to conduct “rejuvenating procedures”.

It is a herbaceous aromatic perennial from the almost unfamiliar family Saururaceae native to China, Japan. Still a rare guest in the country flower beds. 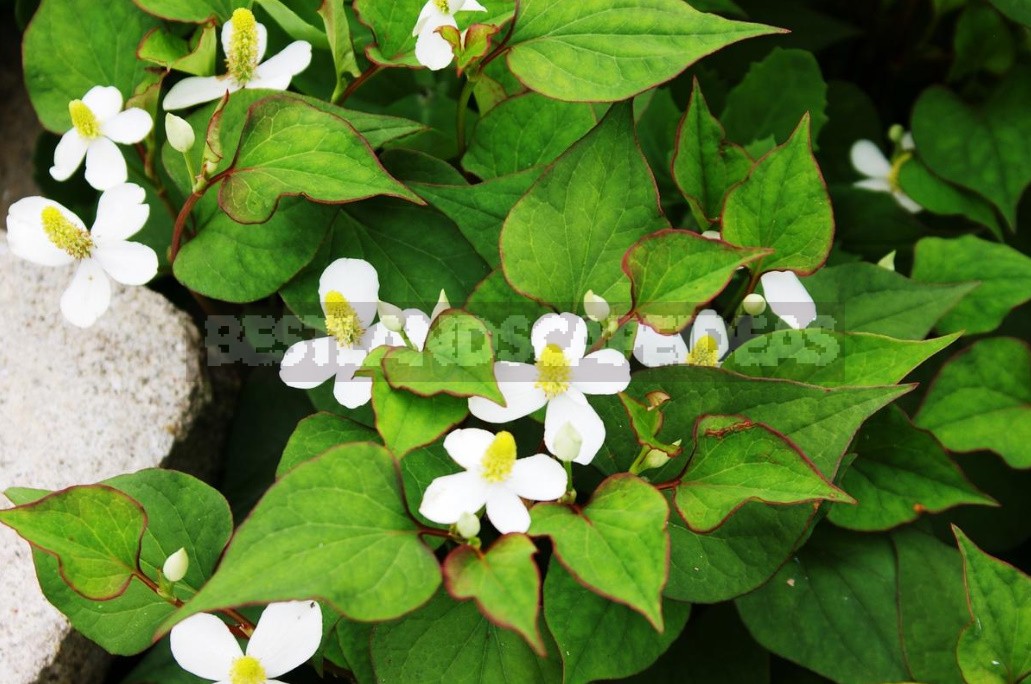 Herbaceous plant 15-30 cm tall, wide can grow indefinitely. The flowers are inconspicuous: small, yellowish-green, collected in dense spike-shaped inflorescences up to 3 cm long, which are supported by petal-like bracts. But the leaves are very beautiful: leathery, heart-shaped, with red veins, the length can be from 3 to 9 cm.

Houttuynia cordata is better to plant in a container (this will help solve the problem of controlling the growth in width and movement) and for the summer to dig in the area in openwork penumbra. And it can be put in the pond to a depth of 5-10 cm. 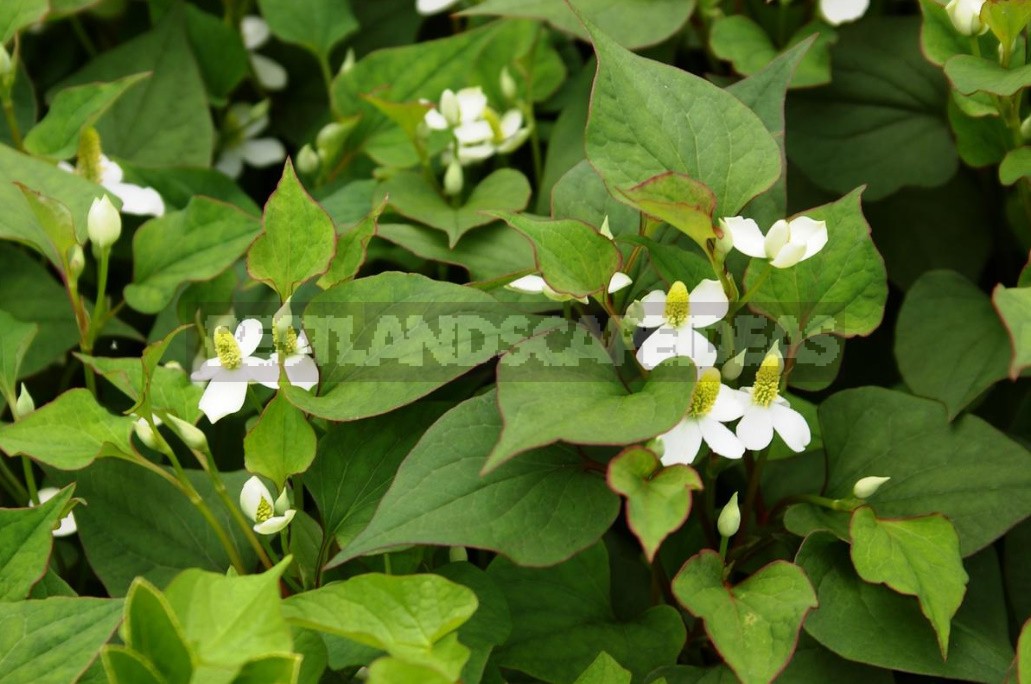 Propagate Houttuynia cordata cuttings, which are well rooted in the soil mixture consisting of turf land, peat, sand, taken in equal parts, you can add mineral fertilizer immediately. Or seeds (retain germination for 1 year), which in April are sown in boxes (soil substrate is the same as for cuttings), covered with glass. Contain constantly in a damp condition, glass daily remove, ventilate. Shoots appear in 30-35 days.

One of the best garden plants is considered to be Heuchera from the family Saxifragaceae: it harmoniously combines spectacular bright leaves and light openwork flowers.

The exotic beauty of modern varieties of Heuchera amazes even the most sophisticated lover of this culture. 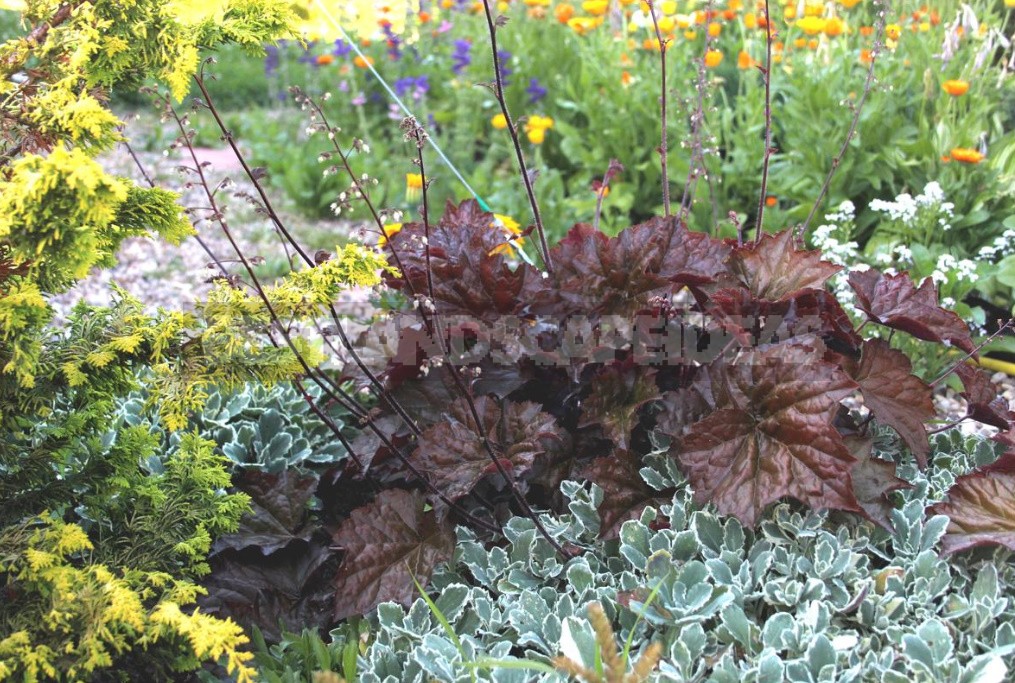 Today they are absolute favorites of Sunny summer cottages. However, due to the rich color scheme, variety of varieties, Heuchera actively crowd loving penumbra Hosta. Like gemstones, live Heuchera can decorate any flower garden, and abundantly flowering varieties will give lightness and openwork floral arrangements. 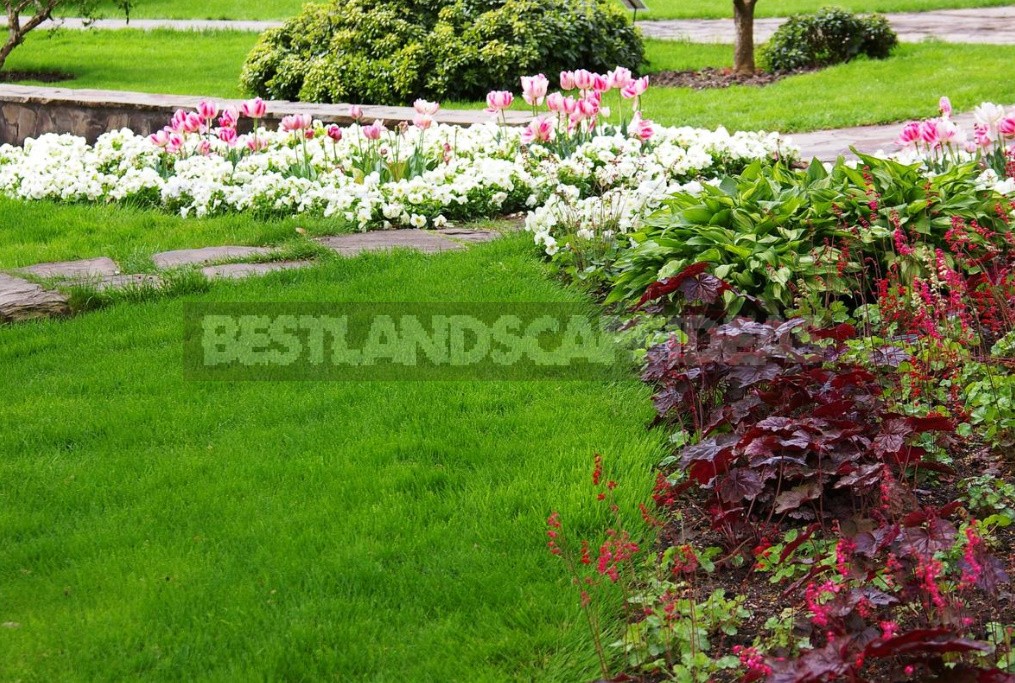 Modern varieties, the famous novelties of breeding not only radically changed the attitude to Heuchera florists in many countries, but also made it an object of admiration.

Fall out Heuchera can have any, even experienced grower, with capricious the most spectacular, especially Heuchera hybrida. More resistant varieties with lime and emerald green leaves. Green like the sun (in the shadows lose color blue and violet inserts), yellows and lemon whimsical green.

In the middle lane, spring planting is preferred. In autumn, small specimens are better transplanted into pots and placed in a cold greenhouse or an unfrozen room, where positive low temperatures are kept within +3 in winter…+10°C. Soil substrate as for Hosta, only with a high content of sand.

In southern regions, autumn planting in partial shade is preferred, since the color of the leaves often fades in the sun. When buying a Heuchera, it is important to find out what location they need to choose the right landing site, because not all of them prefer partial shade. 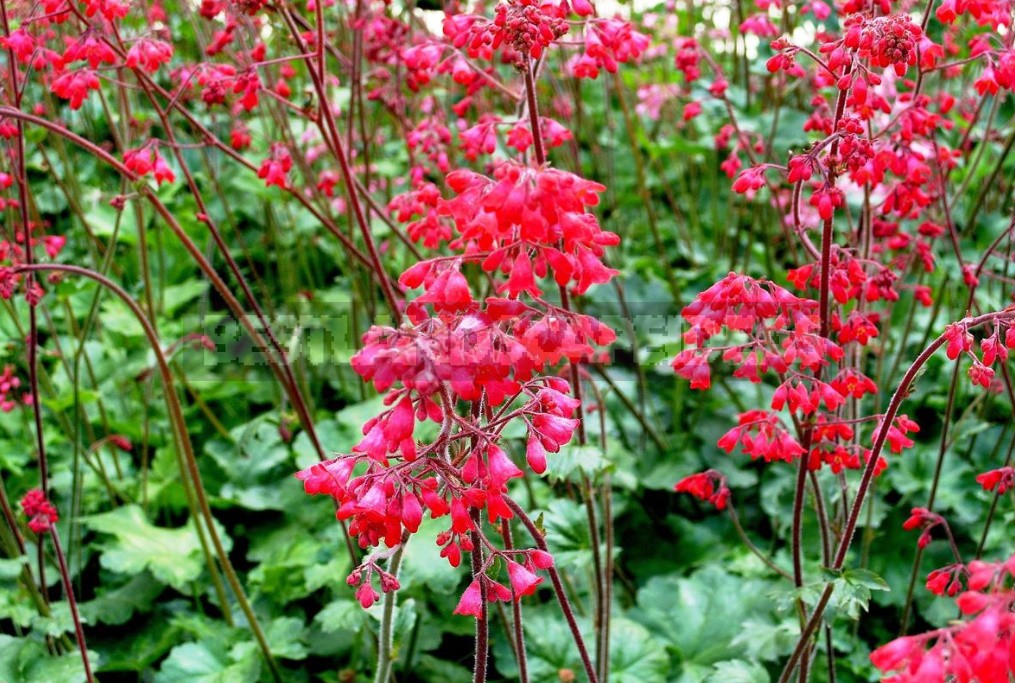 Heuchera unpretentious and grow well in various suburban areas, but prefer light, nutritious, well-drained permeable soil. If the water stagnates on the site, then this culture should not be planted on it, since over time the roots of the plant will rot, which will certainly lead to its death. In wet areas, Heuchera is best planted in raised flower beds with good drainage or planted in containers.

Decorative rosette remains no more than 3-5 years (then the Bush begins to break up and expose the middle), so you need “rejuvenation”. The mother plant is dug up, divided into several parts and transplanted. Usually this is done in the spring, when the plant has already given new leaves, but has not yet bloomed or in late summer, after flowering. When planting, it is better to stick to the distance between the plants about 10 cm. You can plant them in a staggered order, then you get a very beautiful uniform pictures. Planting density — 9 units per 1m².

READ  Solar Gaillardia in Your Garden

Grow Heuchera quite slowly: the process begins only in the second half of the summer or even the next year. Growth activity depends on whether they liked the new place or not.

Heuchera are quite tenacious. They can stand under the snow, even extreme cold, but in warmer climates for the winter can be wet or damp out, if they are too tightly wrapped. Since Heuchera has a large amplitude of the winter minimum: from +10 to -40°C (most species and varieties in the range -34,4°C to -1,1°C), when buying, be sure to pay attention to the recommended zone of winter hardiness, buy plants only from reliable manufacturers of planting material. However, most species and varieties of Heuchera are not afraid of cold, but of the bright spring sun, it is better to shade them with a screen made of burlap. Often they have over the years, the root neck grows, the plant rises from the ground, is exposed (this is called bulging) and becomes vulnerable to severe frosts. To prevent this from happening, it is important for the winter to hog the plant with peat.

Varietal plant is propagated vegetatively, the species — by seed.

Do you grow any of these perennials in your country? What difficulties did you encounter? Have you tried to grow Houttuynia in the open ground?

What to do in cases of poisoning by mushrooms
What is the Acanthus Mollis Plant?
Herbs for Women's Health
English Roses: Varieties, Photos. Tips For Buying And Planting (Part 2)