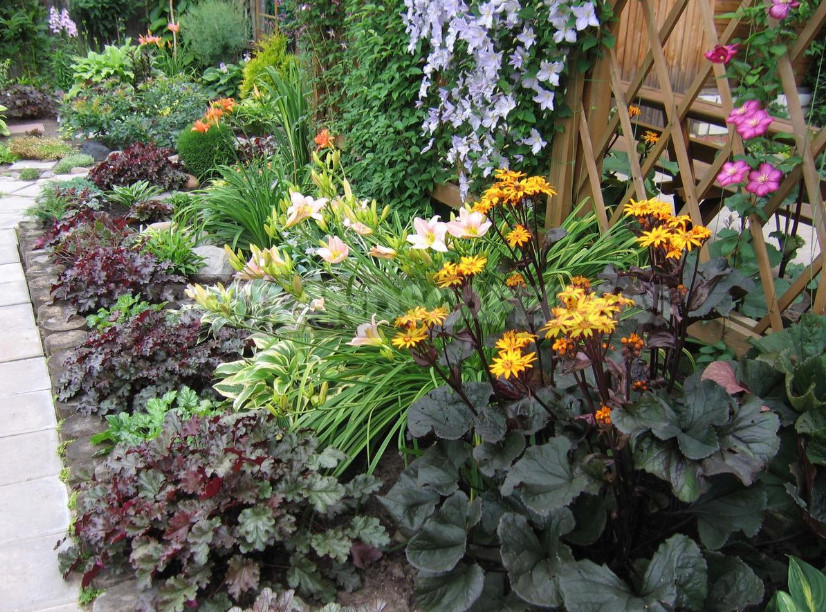 Today, decorative-deciduous Heuchera, thanks to the bright and rich colors, variety of varieties, have become known, fashionable and extremely popular plants, yielding to the championship, perhaps, only the host. Like precious gems, they can decorate any flower garden, and beautifully and abundantly flowering varieties will give lightness and openwork floral arrangements.

For the elegant flowers of coral or scarlet color it is called Coral Bells. 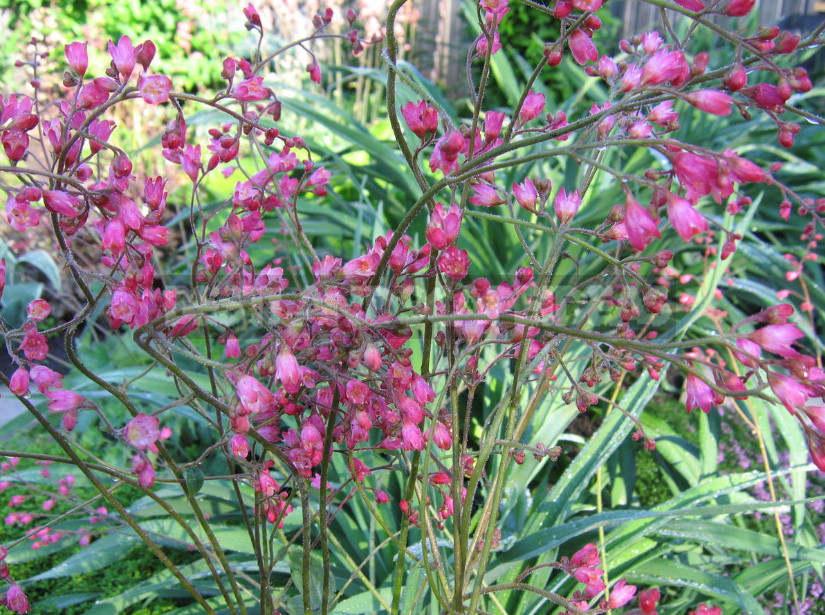 Most often it is found in the mountainous areas of the southern States of the United States and Northern Mexico, where it settles on the North side of granite rocks, between stones or in the shade of cacti. This hardy species grows well and winters in the middle zone, preferring well-drained soil and open ventilated but semi-shaded location.

The plant is drought resistant, but can suffer from overheating in the open sun. Leaves of dense structure, peduncles thin strong but unstable, about 50 cm high. Garden cultivars have more powerful and high peduncles, with branched inflorescences and flowers of various colors: from pure white to dark red. 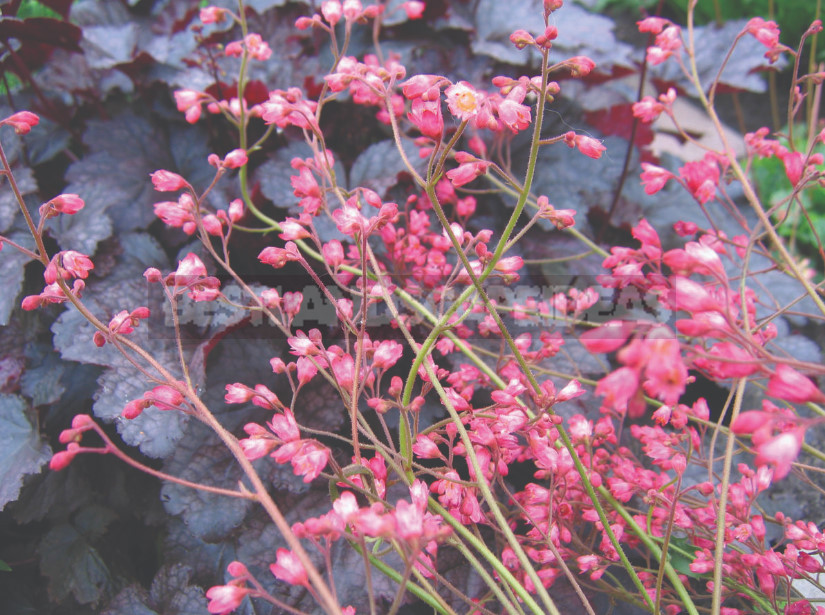 Flowering is abundant and longer than that of species plants. Foliage can be both pure green and silvery spots and venation, as well as white and cream speckles.

Heuchera villosa is native to the valleys, to the East of the Mississippi. It has large beautiful velvety leaves, petioles and peduncles pubescent. The flowers are small and nondescript, greenish-cream. For example, found in nature varieties ‘Bronze Wave’ luxurious bronze leaves up to 20 cm in diameter. 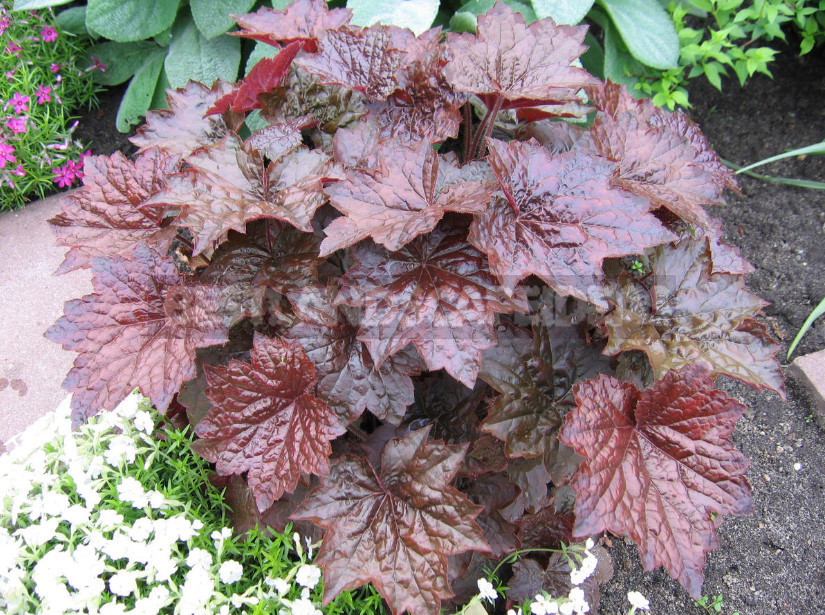 This species prefers rich humus, moist forest soils and semi-shaded areas, so perfectly suited for growing in the garden. Some cultivars are shade-tolerant. Varietal plants have large leaves of light green, purple or apricot-bronze color. From the city of hairy is the famous variety ‘Palace Purple’, named in 1991 perennial year.

Heuchera cilindrica is a mountain species that grows in the harsh conditions of the highlands along the Pacific coast of the United States. Breeders attracted unusually large flowers in combination with a compact rosette of relatively small leaves.

Dense cylindrical inflorescence is composed of a beige-green campanulate flowers, the flower stalks to a height of approximately 60 cm As a rule, varieties of Heuchera cylindrica have strong powerful tall flower stalks up to 90 cm, which are large flowers green, beige, pink or coral color on short stalks. Leaves green heart-shaped-rounded with blunt teeth with a silver pattern or contrasting venation. Varieties grow well in the garden-drained soils, preferring light location or light partial shade.

Heuchera americana is a forest species widespread in the great Lakes region. Prefers rich soil, it grows in open light edges or a light and delicate shade of the trees. It is called mountain geranium.

Large rounded heart-shaped leaves with a serrated edge form a beautiful rosette with a height of about 20 cm foliage Colour variety of instances is changeable and the most brightly colored in spring and autumn, combining velvet-brown, silver-tone spots and veining on a green background.

An attractive feature of Heuchera americana cultivars is a thin border of bright red, coral and even crimson on the edge of the leaf plate. Unfortunately, the most vivid and expressive border is manifested in the winter months in those areas where the climate allows. Therefore, most often this decorative feature we do not have to admire, and only a belated warm late autumn on some leaves can manifest a thin coral rim.

READ  Rudbeckia - the Sun in the Flowerbed 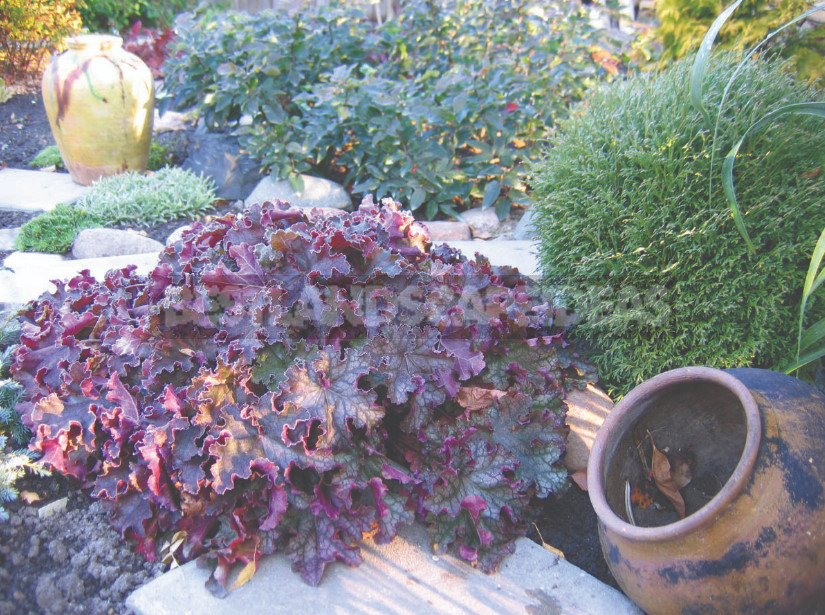 Scientists believe that plants produce red pigment in the cold period of time as a means of protection from stressful situations. The flowers are small and nondescript on high (60-80 cm) peduncles yellowish-green in openwork panicles.

In the wild Heuchera micrantha is found along the coast of the Atlantic ocean. A very hardy species with showy leaves, in form resembling the leaves of the Norway maple; winter leaves are rounded, summer – lobed. Some forms of peduncles and stems pubescent than very similar to H. villosa.

In nature, there are plants with a purple shade of foliage. Breeders have strengthened this decorative quality, and the leaves have acquired a rich purple-bronze or black-brown color with a metallic sheen, there are varieties with silver spots.

Created and interspecies hybrids that combine the best qualities of different types of Heuchera and often differ not only decorative foliage and abundant flowering, but also increased resilience.

Heuchera x brizoides was first obtained in the late XIX century from the crossing of H. sanguinea and H. americana with the participation of H. micrantha. Hybrids resemble H. sanguinea, but differ from it by larger leaves, flowers and peduncles. They bloom longer (up to two months) and more abundant white, pink, coral, red flowers. The leaves are mostly green, with contrasting venation or with white and cream speckles. Flowering plants give the impression of festive fireworks, giving a picturesque lightness to the flower beds. The only drawback can be considered lodging stems with lots of flowers from rain and wind.

Plants of a large group of H. x americana are obtained from multiple crosses of H. americana, H. villosa, H. micrantha and H. x brizoides. They have the most spectacular bright and textured leaves, often wavy or with a highly corrugated edge. Leaf color includes shades of dark purple, purple, bronze-brown, lead-tin, cherry. 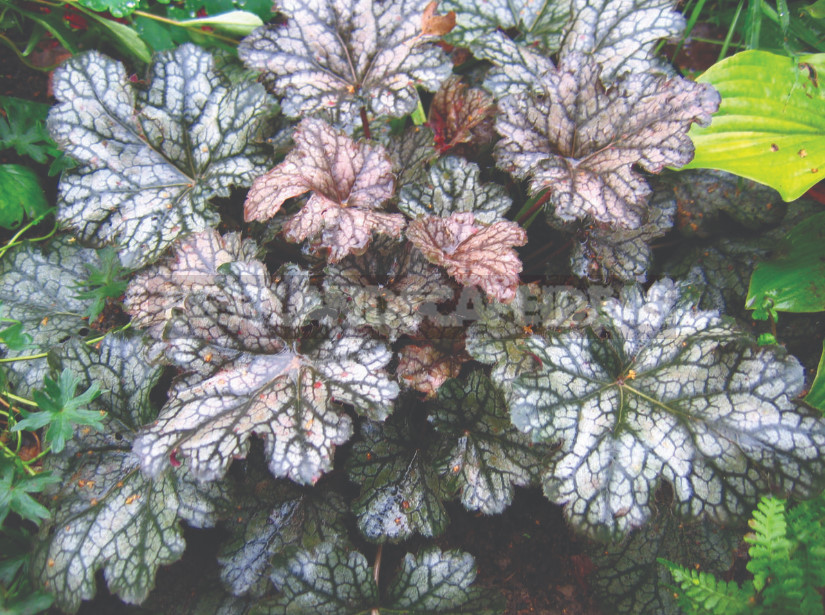 These plants and remind gardeners luxury decorative-deciduous begonias. The leaf plate can be painted in one color, but most often it is a complex combination of several colors and shades. The combination of picturesque leaves and light lace inflorescences makes an indelible impression.

In breeding development attention is paid not only to abundant flowering and ornamental foliage Heuchera, but also qualities such as increased resistance to disease, resistance to high humidity and air temperature, shade tolerance, drought and cold resistance. Strong non-running stems, strong stems, powerful rhizome and even a miniature habit are also attractive qualities. Many new varieties and hybrids possess these virtues, that allows to extend the range of application of Geiger in various flower beds and garden compositions.

Coleus from Seed
Choosing and Planting Astilbe
Delicate Liana "Macfadyena Unguis-Cati"
About The Benefits Of Tagetes, Or How Beauty Saves The Garden