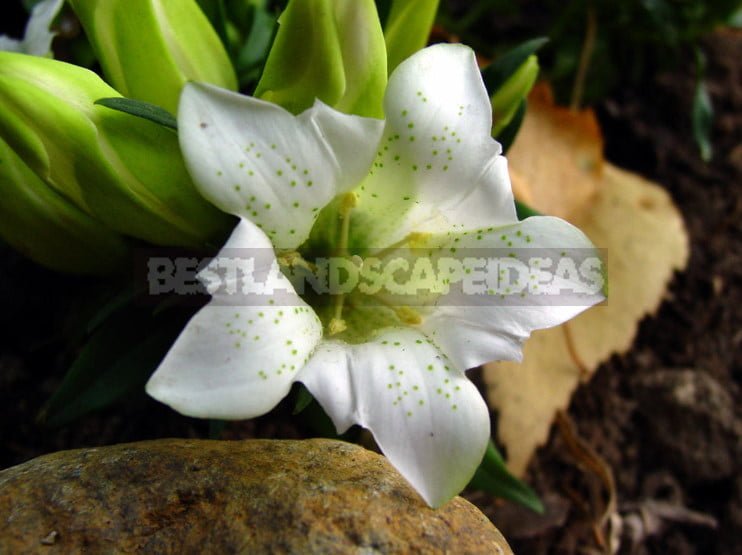 Lucky gardeners of those countries where winter is short. There is even a category of plants, which is called ” winter blooming.” We do not have such luxury-almost six months a year our gardens are covered with snow. And the more acute the desire to extend the beauty of the garden, to see the flowers from spring snow to autumn.

Autumn colors are traditionally considered “crimson and gold” -yellow, ochre, reddish-brown. By the end of summer they gradually fill the garden. Helenium, rudbecia and Echinacea, chrysanthemums, shades of leaves saying goodbye to us – all its colors reminiscent of the end of the season and the coming winter. Personally, I always want to escape from the sadness of autumn, and to hope for so far from its spring. “Spring” flowers are knocked out of the overall tone of the garden, but the nicer they seem to me.

Here are escaped from the ground colchicums, withered burdocks which I cut at the end of July. On a warm time, remind them bright pink flowers sticking out of the ground. Even quite ordinary Crocus, C. autumnale and C. speciosum good in the mountains, and what can we say about Terry brands ‘Waterlily’, this multi-petal large flowers which are held almost to the snow, one after another. Terry white floral Colchicum autumn is not so majestic, but is an example of resistance, combined with refinement and tenderness. 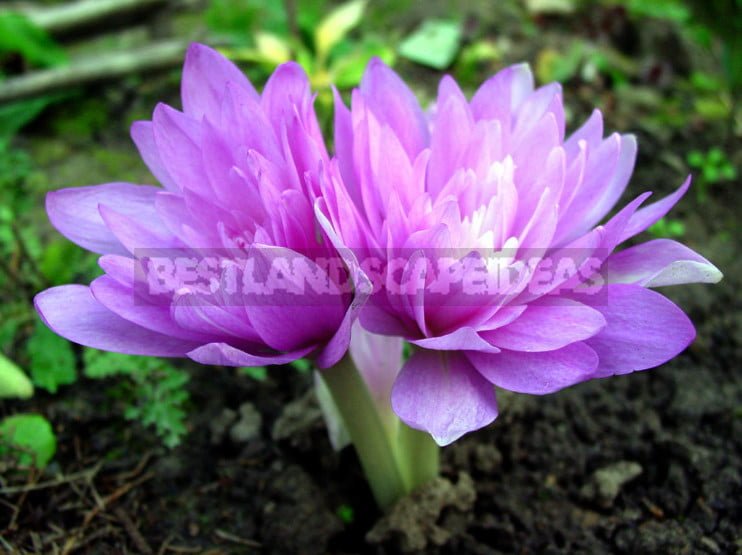 And that very spring color blue. Where, where to get during the fall of the piercing blue leaves, echoing the transparency of the autumn sky? I already know in what place of a garden this treasure is hidden, and with each arrival with increasing impatience I expect dissolution of the sharp buds twisted by a spiral.

All summer I defended this inconspicuous “grass” from slugs, pushed over it the leaves of larger neighbors, sprinkled shoots with earth to more new plants formed on this fabulous island.

What’s the bluest thing in the world? Gentiana. And autumn is no exception: among the crumbling leaves magically bloom blue stars Gentiana sino-ornata.

Strictly speaking, under this name to us imported a garden hybrid of Himalayan species, and the species itself is likely to not have time to have us to flourish. But all these Botanical little things have no meaning when this miracle blooms. 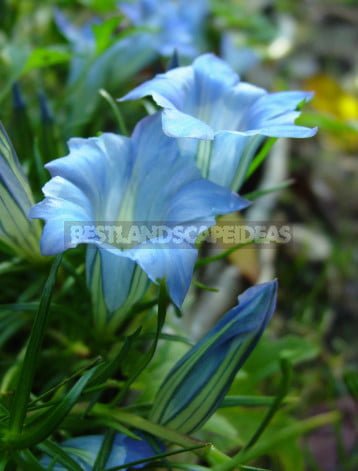 ‘Waterlily’ and Gentiana sino-ornata bloom almost simultaneously and when landing together create a stunning Duo. Strong tops Colchicum takes up a lot of space in the spring, when gentian shoots have not yet grown. And in the second half of summer they give way to its thin stems with needle leaves. 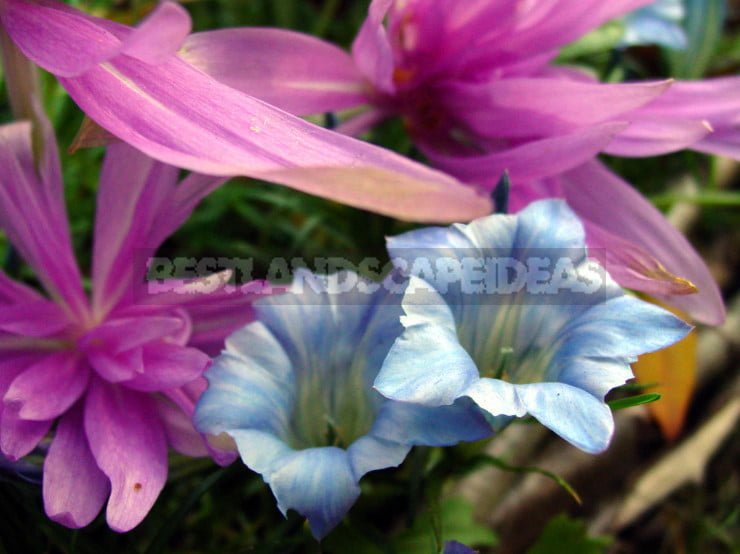 There is another Gentiana, more intense blue which still do not give me rest. Gentiana scabra from year to year is sold in garden centers in late summer – autumn in the form of compact copiously flowering shrubs. However, I have not suffered any winter. Those lucky ones who managed to help her survive the winter or sow seeds from it, and did not wait for flowering. Until I stopped experimenting with her. 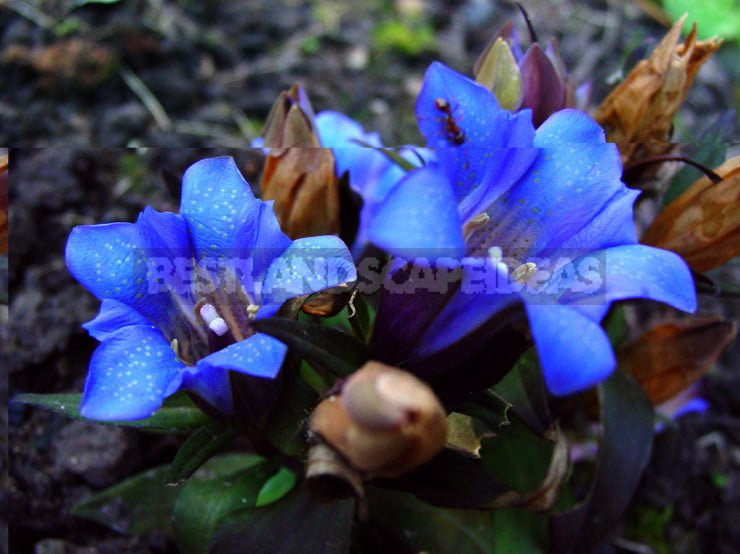 The sudden appearance is also characteristic of Crocus speciosus. They usually appear even before the snow. But after planting bulbs rooting and flowering delayed, and the flowers can jump into one of the late-autumn thaws,when the ground is already covered with snow. Strange, I’ll tell you, the sight is sticking out of the snow blue flowers! Last greetings of summer and a symbol that spring will happen again.

And in the shadow corner bloom in late autumn very different flowers. One of them is my mother. Tricyrtis hirta – more fun than garden decoration, especially at a young age. The overgrown bushes acquire a pretty slightly leaning towards the sun shape, and the flowers attract all passing by. They are revealed gradually, from the beginning of September to snow. 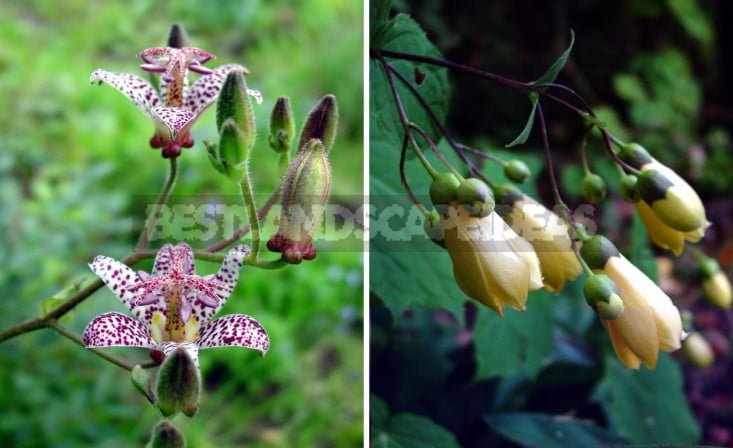 Even later flowering is Kirengeshoma palmata. Buds are visible in the summer, but they develop slowly, gradually turning into large yellow-wax flowers in drooping hands. Before flowering, which occurs in September-October, good and the whole Bush Kirengeshoma, neat, with” maple ” leaves. But, despite the power of shoots and high growth, this plant is tender and vulnerable to spring and autumn frosts, from which it is better to cover with lutrasil.

Tricyrtis with Kirengeshoma (some pretty exotic!) surrounded by my ferns, sedge, hosts and other shade-lovers. In the spring, the edge is bloomed with bulbous, in the summer they are good at the expense of decorative-deciduous, and in the autumn, when you do not expect anything special, suddenly pleases with rare and original flowers. 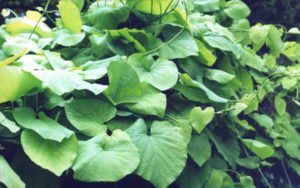 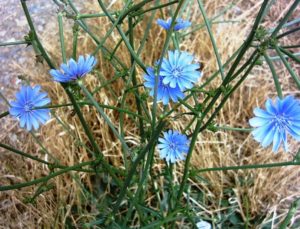 Chicory is an Amazing Plant with Many Useful Properties 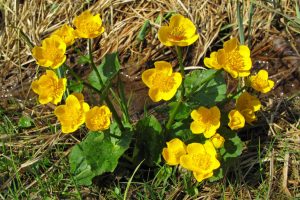 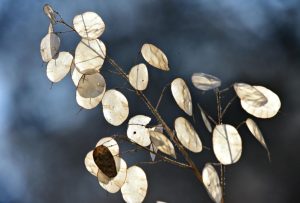